Today is the last day of the final NMRA/NMCA All-Star Nationals event held at Atlanta Dragway, so racers will make a little history on the track. Mother Nature shortened the program yesterday, but we are back in action today for a full day of eliminations in all the categories, including QA1/TorqStorm True Street and the Dodge / Mopar Hemi Shootout. Additionally, several brave souls made it out for the car show on Saturday, but today a full field of beautiful machines vies for the trophies handed out at 3 p.m. this afternoon.Â

The schedule for today's action-packed day at Atlanta Dragway is as follows. Eliminations began at 8:30 a.m. and roll on through the rest of the day. 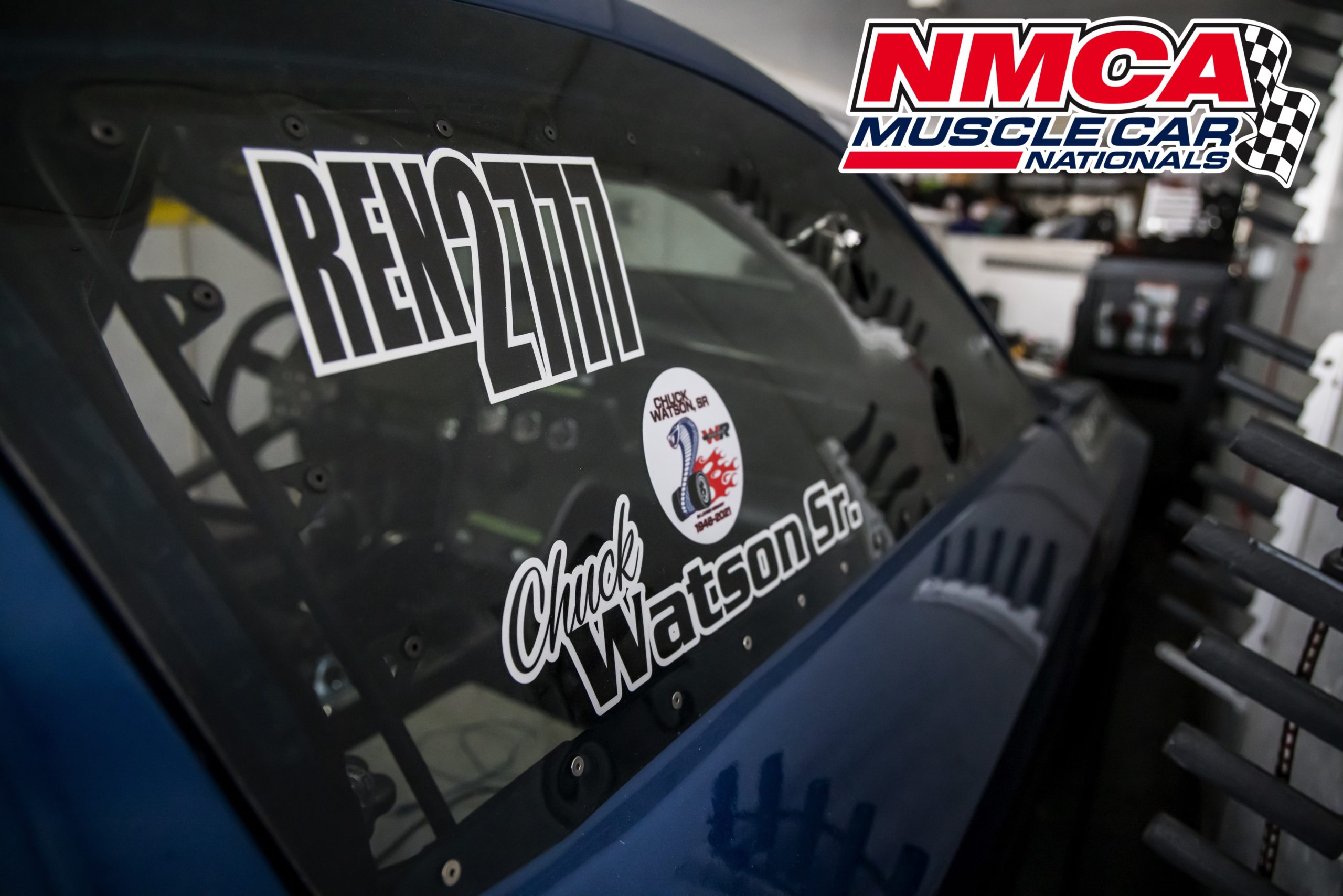 With the passing of Watson Racing founder and Holley EFI Factory Super Cars racer, Chuck Watson Sr., Joe Cram was moved to honor his fallen friend. Because of the Watson connection to Cobra Jets he worked with Pete Epple to design a pair of decals that commemorate the man who did so much for racing. A lot of people don't get my sense of humor, but Chuck always wanted to talk, Cram said. The decals were a big hit with racers and friends from across the globe clamoring to celebrate Watson's legacy. Cram even commissioned a 15-inch version of the decal for the Watson Racing shop. There are a few people in racing that make you a lesser person if you never met them, and Chuck was one of them, Cram added.

Lester and DJ McCain decided to mix it up with the VP Racing Madditives/Mickey Thompson Tires Street Outlaw racers this weekend at Atlanta Dragway. They're going right into eliminations without a test hit, as they teched in, but the 4th round of qualifying was cancelled. The McCains build the 474ci engine themselves using an Energy Manufacturing Ltd. block and Callies Performance Products crank with Mozez cylinder heads and a Nitrous Express system. South Carolina native DJ McCain, who is driving today while his brother Ryan remotely tunes, is hoping to go 4.30s at his first race Atlanta Dragway. In need of a new class, Angel Gaulden credits our own General Manager & National Event Director Rollie Miller with steering her toward racing in Proform Rumble with her Camaro backed by Modern Muscle Extreme and The Tuning School. Running a rare manual transmission in the class, she stepped up to a new McLeod clutch before the season opener, and she is still adapting her driving style to work with varying track surfaces. She plans to run the full series this year, and at Atlanta Dragway she overcame a crankcase ventilation tube failure and the car ran well in qualifying. It clocked a 12.30 right off the trailer and she is running on 12.25 index this weekend. Carrying momentum out of a successful outing in JDM Engineering Limited Street at the season opener, Samantha Moore is really getting a handle on her TVS-supercharged 2014 Mustang. After consulting with several experts, Moore's team constructed a new powerplant in the off-season, which includes a new camshaft grind. She is still getting a feel for what the combination wants, but says the Holley EFI system enables her to get the most of out it. Moore did have to fight through an electric power assist steering issue, so she is considering a move to a manual rack after this event. For now it seems to be working, as she qualified in the top spot with an 8.31 at 164 mph rip. Though his debut race with NMCA wasn't trouble-free, Rusty Howard still had a great time running his 1970 Camaro in MagnaFuel Open Comp. The rear brakes seized up and put a literal drag on his qualifying pass, so he overnighted parts and spent some of yesterday's weather downtime repairing the brakes in preparation for eliminations. The big-block Chevy-powered machine runs on alcohol and features a Powerglide transmission. Howard enjoyed the organization and atmosphere of the event so much that he plans on running more NMCA events this season. Racing can be an adventure on and off the track. Johnny Lightning Wiker pilots an insanely quick, Kenne Bell-supercharged Lightning pickup in Detroit Locker Truck & Lightning. During qualifying the truck's huge torque finally took its toll on the driveshaft. Fortunately the safety loop protected him and the truck, but Wiker needed a new custom shaft in a hurry, so he trekked an hour to Driveline Service of North Atlanta, where they whipped up a new custom unit in under three hours. He was back in time for the third round of qualifying. With the new shaft installed, the truck returned to action and performed just like before and he qualified in the fourth spot thanks to a .026 reaction time.Â Chasing an intermittent stumble on his Stifflers-backed S197 was ROUSH Performance Super Stang star, Marvin Knack. It can cost his car a tenth if it appears on the racetrack, but it isn't predictable enough to compensate for it. Knack, who ran his first Super Stang race six years ago at Atlanta Dragway, says the car is running well, but he needs to step up his reaction-time game to go rounds this weekend.Â 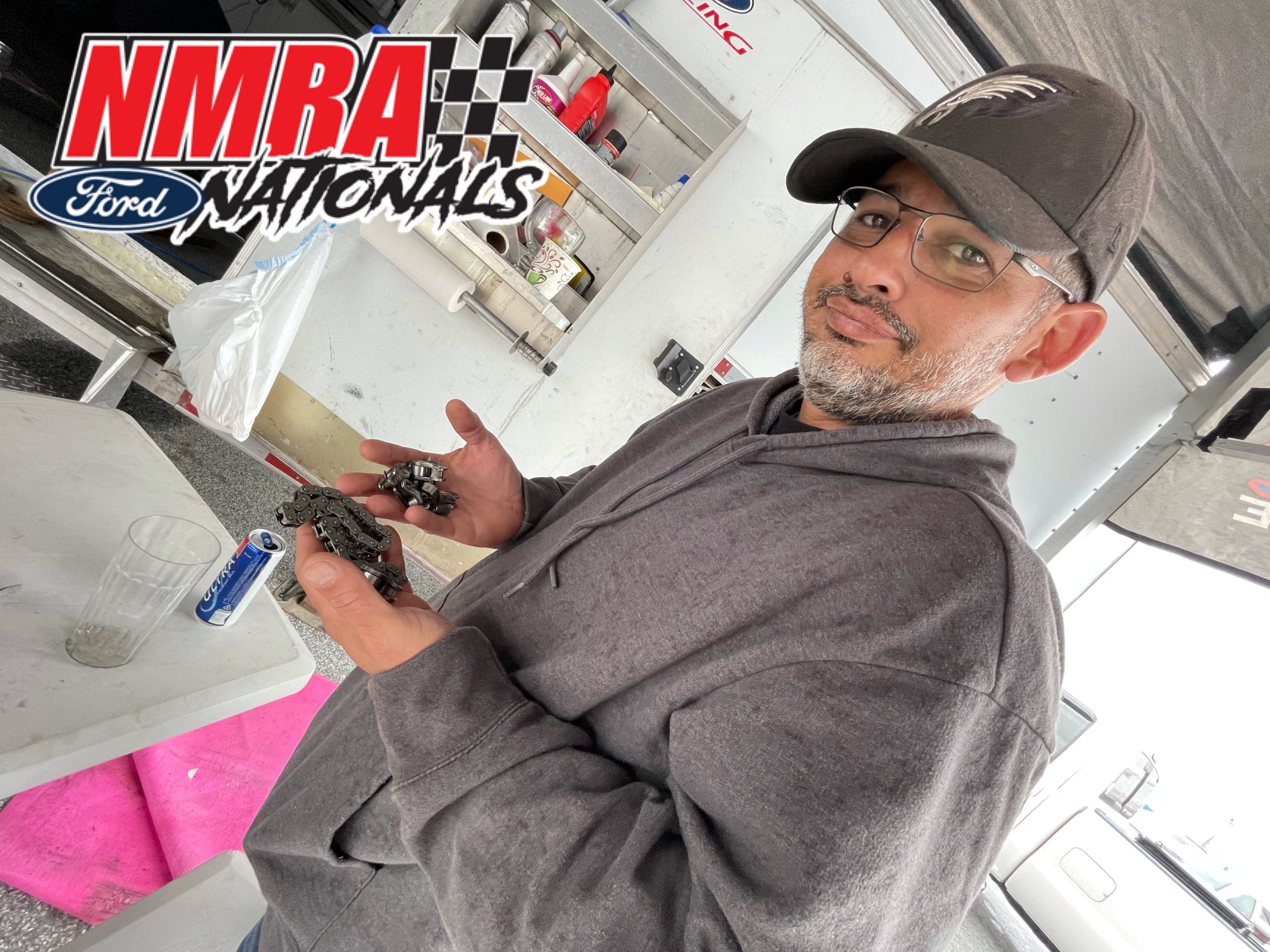 As you can see by the cam followers, chain, and needle bearings in Joe Cram's hands, Becki Cram's Coyote-powered 2010 Mustang is hurt. The cam, timing chain and valvetrain carnage means some quick repairs are needed for the Edelbrock Renegade machine when they get home, but Becki and her team were still enjoying the camaraderie in the pits at the 13th Annual Scoggin Dickey Parts Center NMRA/NMCA All-Star Nationals Presented by MAHLE Motorsport. 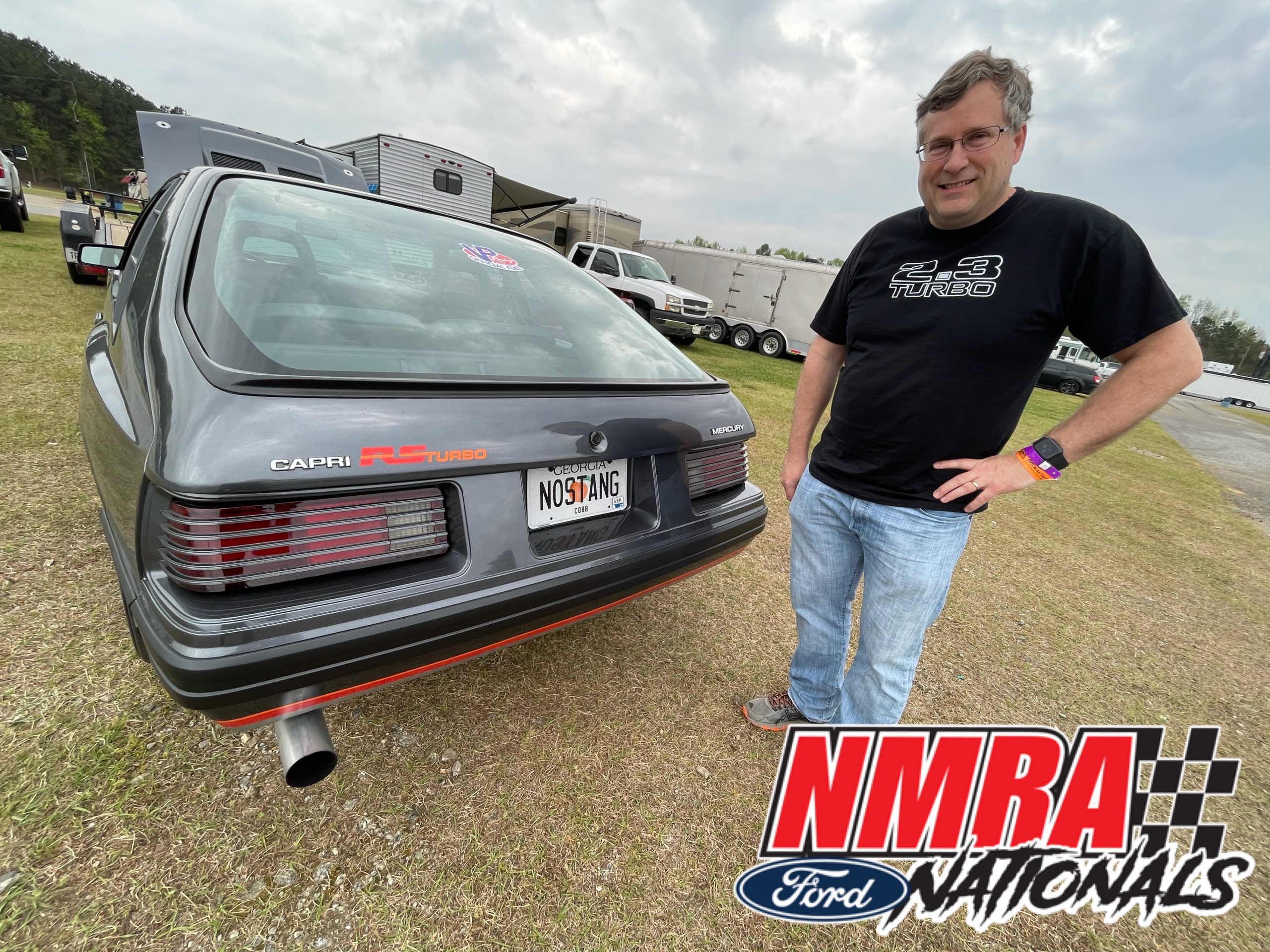 While Fox-chassis Fords remain a constant in NMRA competition, it's not often that you see a 1984 Mercury Capri RS in competition. Chris Curtain rescued this example as a dilapidated shell and fellow Capri fan Jason Duggar brought it back from the dead with some slick paint and body work. Chris powered the revived Capri with a built turbo 2.3-liter engine topped by a Stage 3-ported casting from Boport Racing Heads. He also runs a Boport 2.1 camshaft and a PiMPx ECU from Stinger Performance that allows custom tuning the batch-fire injection with MegaSquirt software. Curtain is running for the 14-second crown in QA1 True Street.Â 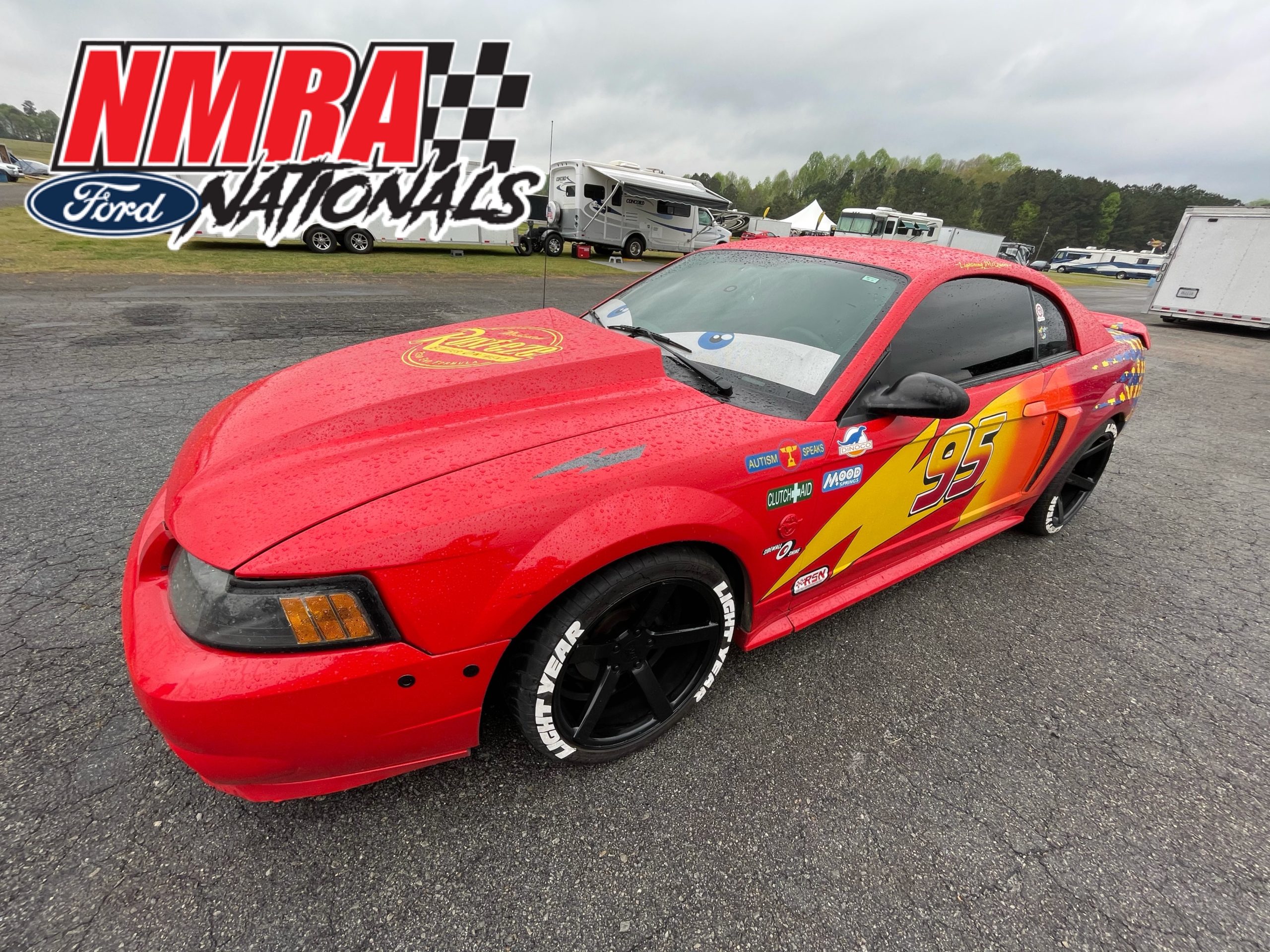 Jarrid Scroggins' ProCharged, Lightning McQueen-themed 2004 Mustang is an attention-grabber, and that is the idea. He routinely changes the airbrushed wrap, but always with an eye toward raising awareness for Ady's Army, a charitable group that helps kids with Autism. Scroggins not only brings the car to events like the UPR Products car show, but he gives these special kids rides at an annual track day held at Barber Motorsports Park in Birmingham, Alabama.

While his Ford Performance Cobra Jet is getting motor work done, Randy Eakins is campaigning his 2010 Dodge Mopar Challenger Drag Pak in Coan Engineering Stock/Super Stock Combo this weekend at the Scoggin Dickey Parts Center NMRA/NMCA All-Star Nationals presented by MAHLE Motorsport North America. Eakins' Drag Pak is one of three built with the 360ci Magnum engine, and he recently put a Dana 60 rearend in it to reduce maintenance.

When the COPO Connoisseur Scott Libersher (right) met Todd Haven (left), the two became fast friends “ literally. Hoven has been a longtime bracket racer in the NHRA with his Hemi-powered Plymouth, and Libersher invited him to come out and race in NMCA Coan Engineering Stock/Super Stock this weekend. Hoven, who resides in Pennsylvania, is piloting Libersher's 1 of 1 ever produced anniversary edition '15 COPO Camaro with a 396 ci engine. Libersher's fun-loving attitude and Hoven's serious side complement each other well, and Hoven goes into eliminations from the number 17 spot as he ran an elapsed time of 9.811-seconds on his 10.55 index.

Thanks to motivation from his friend and multi-time champion Phil Hines, Steve Meehan is enjoying his first outing with the NMRA as he is running NMRA VP Racing Madditives/NMCA Mickey Thompson Street Outlaw this weekend. Meehan made one test pass before going into qualifying, and with those as the only laps on his '81 Mercury Capri, his respectable 4.710 at 148.61 mph run put him fourth. Built by Gary Rohe Race Cars, the Capri is powered by an Oakley Competition Engines big block Ford on nitrous with a Powerglide transmission. Meehan had been leaning on the tune up a bit but the car responded by going up on its bumper, so he'll detune it to prepare for eliminations today.

Back after a hiatus from racing with the NMRA due to his busy travel schedule required to rep his employer, Laris Motorsports Insurance, Mark Anderson is on the property with his NMRA Richmond Gear Factory Stock ride. Anderson arrived in Atlanta late and was only to make one qualifying run, but his 10.329 at 128.87 mph effort was stout enough to situate him in the number four spot. In a class full of Coyote engines, Anderson's little 2-valve gives him a weight advantage over the rest of the field and he's ready to get after it today in eliminations thanks to support from Laris, Drag Champ, Redline Performance, and Tim Matherly at MV Performance.

Working with three-time NMRA/NMCA champion Brandon Alsept of BA Motorsports, Tom Mueller made his triumphant NMRA debut this weekend. Driving the '96 Ford Mustang Mystic Cobra that previously belonged to NMRA Coyote Stock racer Derek Kernodle, Mueller kept the car's former Gen 1 Coyote in place but upgraded the transmission to a G-Force G-101A with an ACT clutch. Mueller qualified fifth in NMRA Richmond Gear Factory Stock with a 10.668 at 125.79 mph hit, then went on to get his first-ever NMRA elimination round win against Mark Anderson on Sunday afternoon.

Doing his best to double his odds of success, Charlie McCulloch is running in both NMRA ARP Open Comp and NMRA Exedy Racing Clutches Mod Muscle this weekend “ with two different cars, of course. He was successful in the first round of Open Comp eliminations with his '04 Mustang but didn't advance in Mod Muscle with his '02 model. Despite the upset, McCulloch is still all smiles as always as he heads into round two.

Joe Edmonston of Acworth, Georgia, has been wanting to go down the dragstrip since he was 14 years old and this weekend, at the age of 57, he finally made it happen for the first time in the NMCA Dodge/Mopar HEMI Shootout. Driving his '15 Dodge Hellcat which is equipped with a Hellion twin turbo kit to deliver compound boost in conjunction with the factory supercharger, Edmonston has gone as quick as 10.36 at 138 mph so far here at Atlanta Dragway. 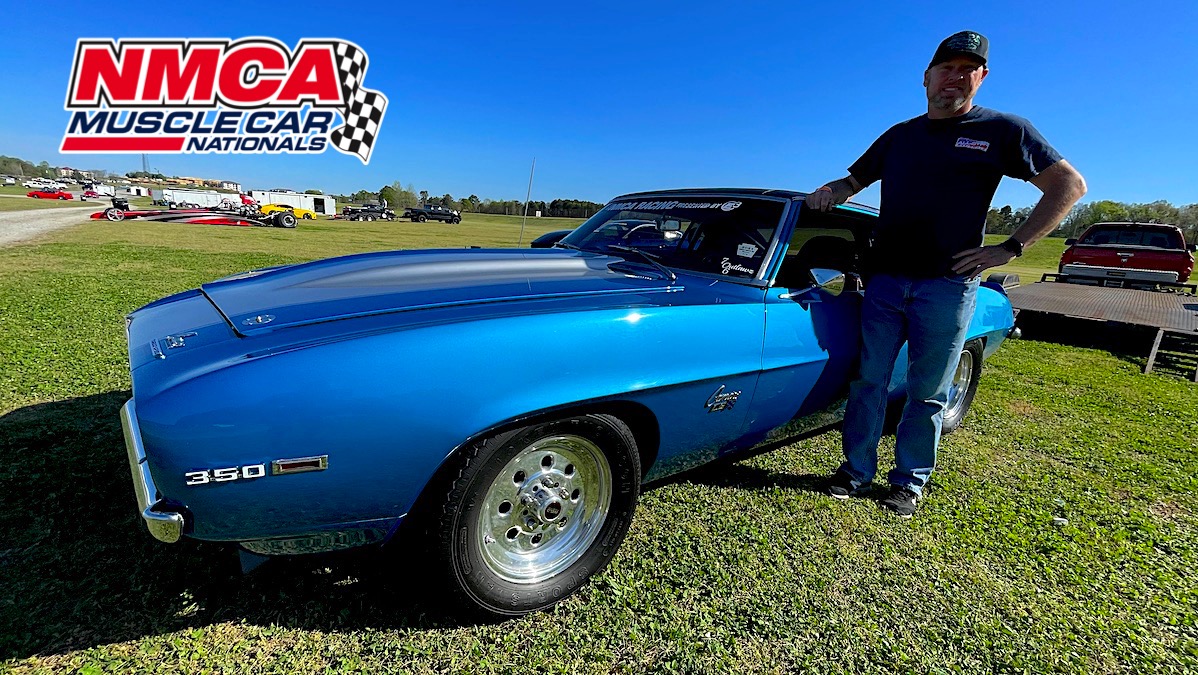 How would you like to rip off three passes in the low 10s and drive home in your 1969 Camaro That's just what Harry King did this weekend in TorqStorm Superchargers True Street. His classic features a 2010 5.3 LS swap under the hood, which is stock save for a Trick Flow camshaft, head studs, and aftermarket head gaskets. It is boosted by a VS Racing turbocharger pumping out 18 pounds of boost, which pushes its rear-wheel output to 730 horsepower. That power travels to the ground via a Turbo 400 with a transbrake and a 10-bolt rearend. King isn't afraid to drive it, either, as he road-trips to various car events across the Southeast. This weekend King didn't win the 10-second class, but he did earn that honor at Atlanta Dragway back in 2019.