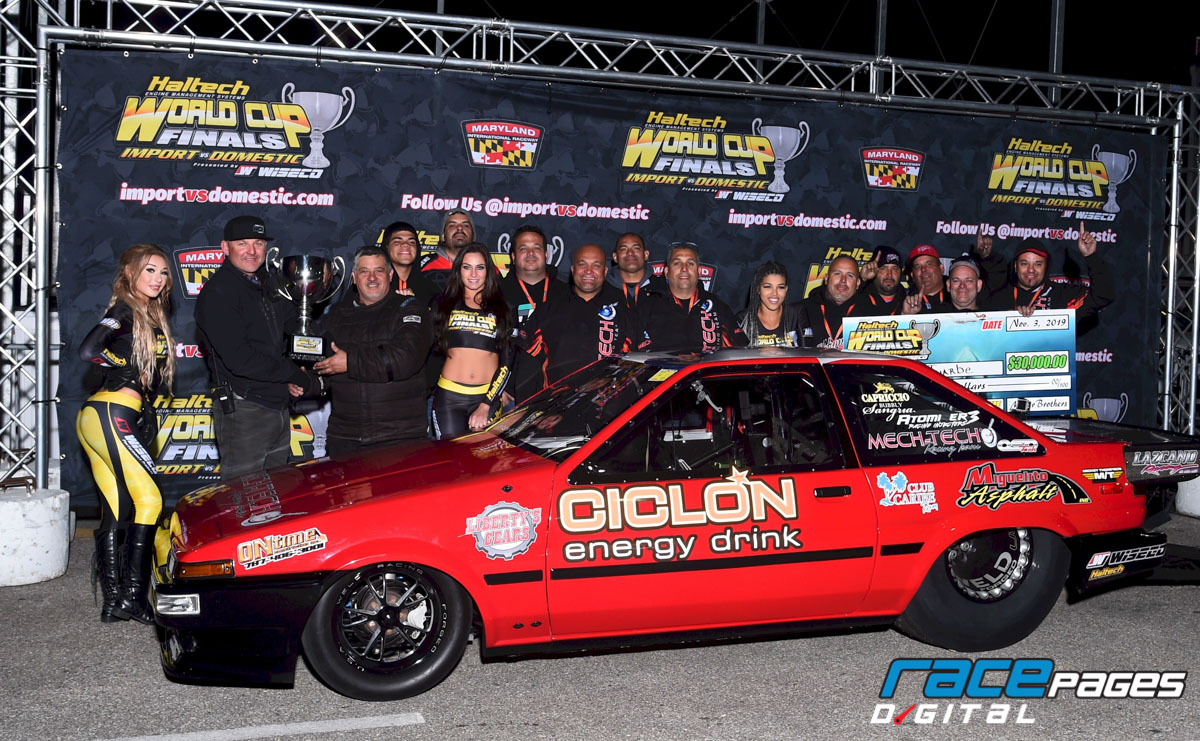 It was another successful year of late-season action at Maryland International Raceway in Budds Creek, Maryland, as the Haltech World Cup Finals: Import vs. Domestic presented by Wiseco Pistons was the stage for cool, fall air and record-breaking runs. By the time the race had wrapped up, it was a pretty even split between the import and domestic vehicles sitting in the winner's circle, with a number of NMRA and NMCA regulars entering the event and even taking home the big checks. In the Mickey Thompson Outlaw vs. Extreme category, Isaias Rojas was the number one qualifier with a 5.68 at 251 mph effort. The class was largely dominated by import entries and it is therefore not a surprise that the finals featured the Toyota Corolla of Jorge Juarbe and the Mazda RX8 of E. Burgos. Juarbe was uncontested and collected the win for his four rounds of racing. 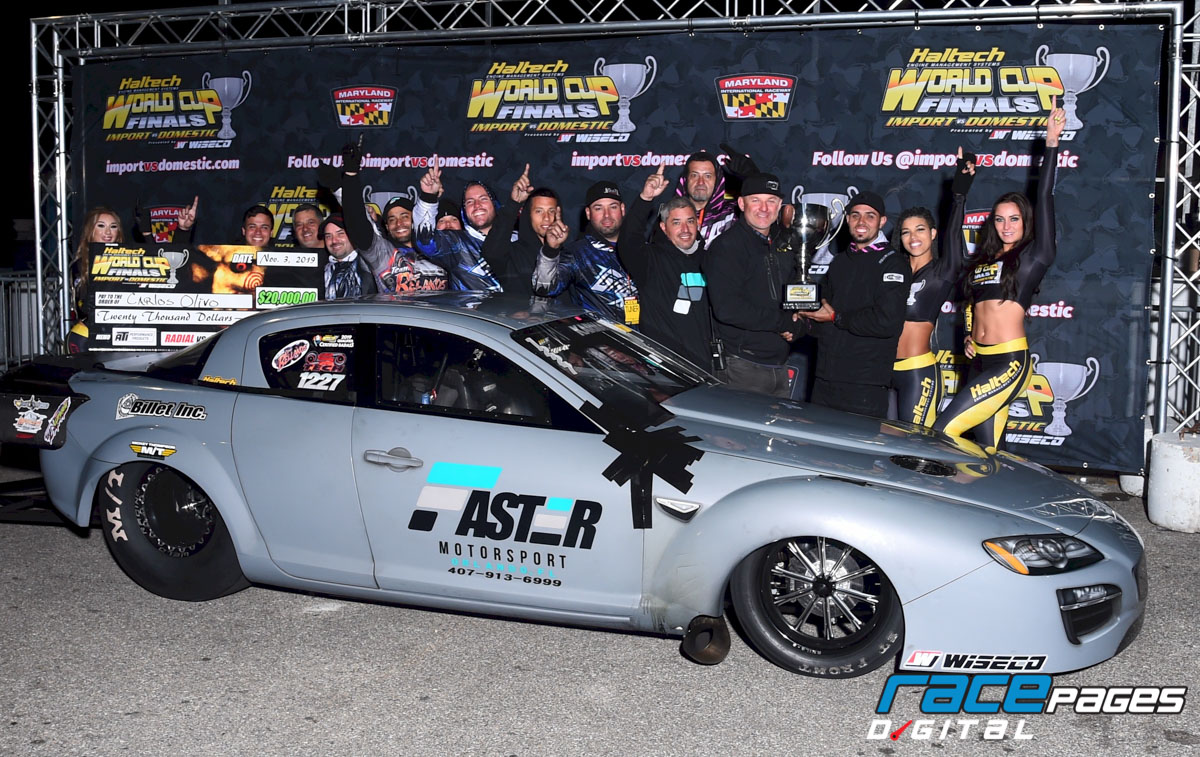 The ATI Performance Products Radial vs. Modified class saw the 2018 Chevy Cobalt of Carlos Eduardo set the pace with a 6.16 run at 225 mph in qualifying. 2018 NMRA Street Outlaw champ Andy Manson went two rounds before he and his Mustang bowed out Scott Bitzer and his Chevy Malibu. Bitzer squared off against Carlos Olivo in the final round, but it was Olivo's day as he took the class win in his 2006 Mazda RX-8. 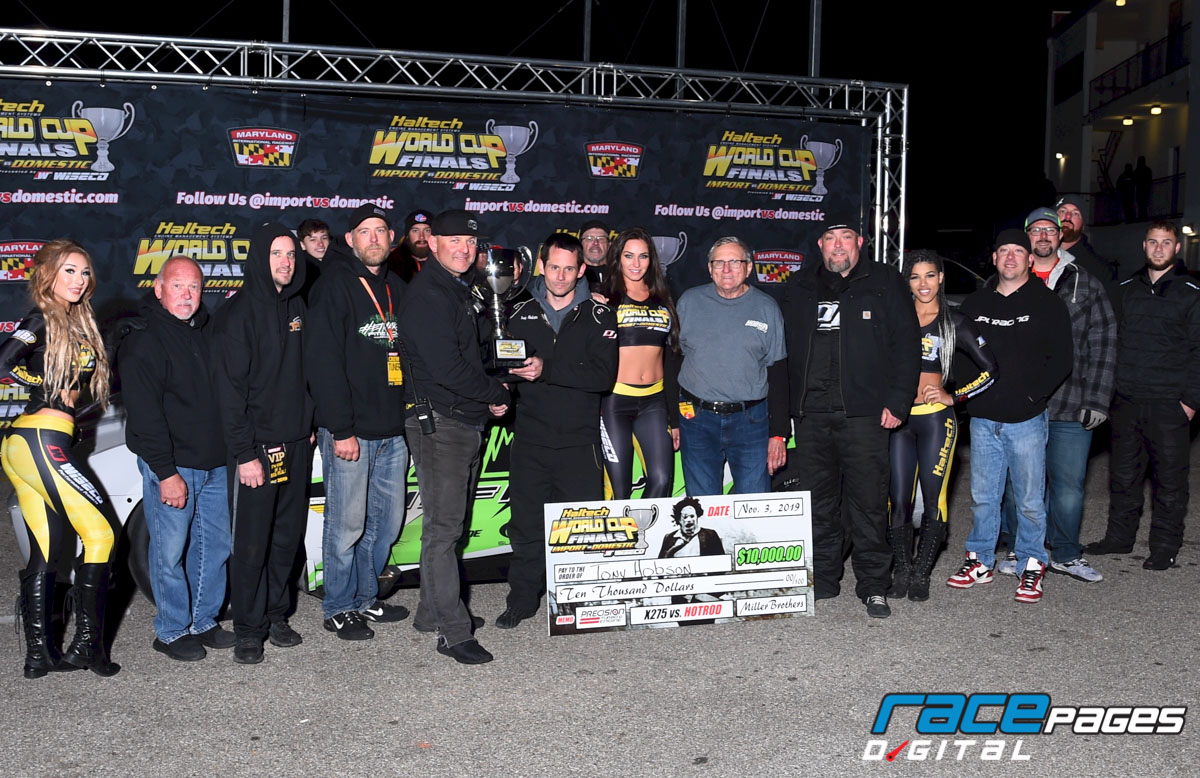 As one might expect, the Precision Turbo & Engine X275 vs. Hot Rod class was chock full of domestic machines and it was 2019 NMRA Street Outlaw champion Vinnie Palazzolo who topped the qualifying sheets with a 6.63 run at 209.79 mph. Palazzolo was joined by fellow NMRA racers Tony Hobson, Dom DiDonato, and Todd Bennett, as well as NMCA racers Eric Kenward and Mike Cerminaro. One by one, the NMRA/NMCA racers fell, as did the few imports, and in the final, it was the Vortech-blown Mustang of Craig Walls facing Tony Hobson's Mustang. Walls was first off the line, but Hobson was first to the stripe, running 6.73 to Walls' slowing 8.61. 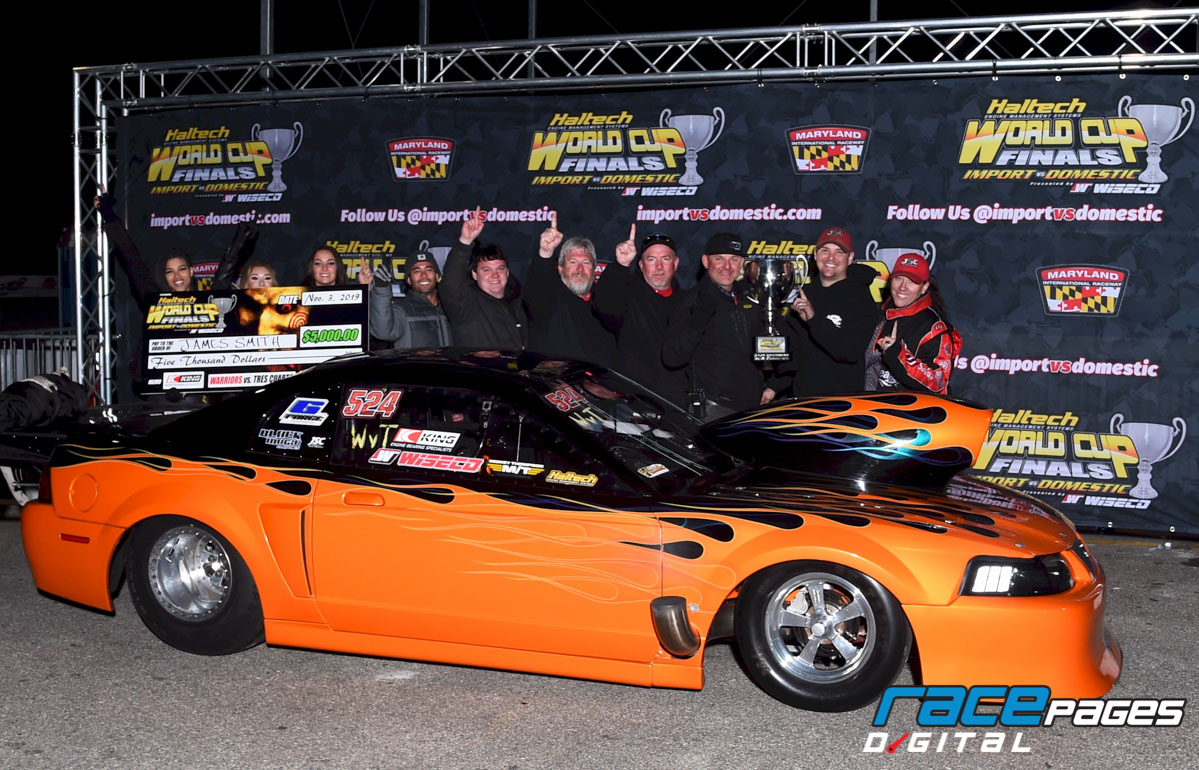 The King Racing Warriors vs. Tres Cuarto class was 32 cars strong after Davie, Florida's Gidi Chamdi topped the qualifying sheet with a 6.56 run at 225 mph.Â  While there were plenty of domestic cars in the class, such as the NMRA's Keith Rhea and LSX True Street veteran Dan Rensch, the imports looked to have the edge. As it turned out, the final four came down to two Mustangs (Keith Rhea and James Smith) and two RX-7s (Jomar Gomez and Harold Gomez). In the final, it was Smith and Jomar Gomez, with Smith's 632ci-equipped Mustang powering past the 13B for the close 6.755 to 6.794 win. 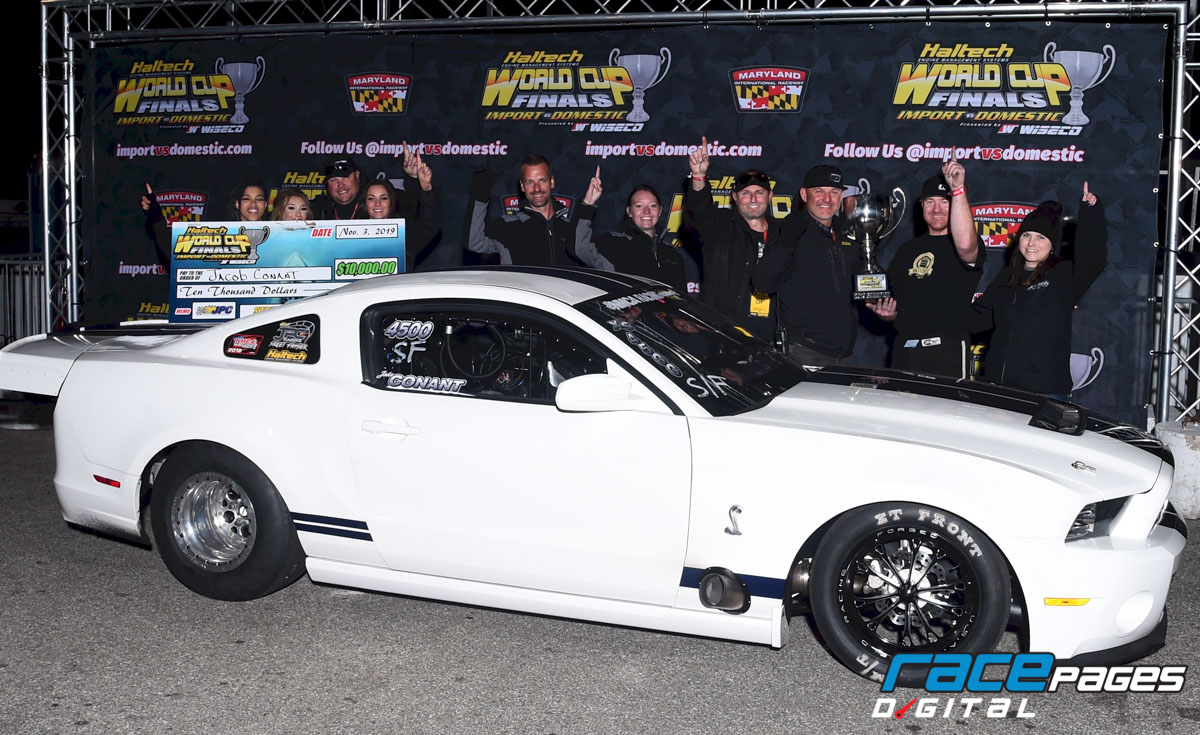 With JPC Racing as the class sponsor of Street Fighter, it's no surprise that there were a lot of NMRA racers entered into the class, as the company has been a prominent figure in the series and continues to turn some of the quickest and fastest Mustangs anywhere. NMRA racers such as Valerie Clements, AJ Wice, Dom DiDonato, Alton Clements, Adam Arndt, Jacob Conant, and Keith Ciborowski joined NMCA racers George Farkouh and Fran Schatz and their LSX-powered machines. After qualifying was complete, though, it was Asier Torres at the top with his Nissan GTR clocking a 6.871 elapsed time at 207 mph, followed by Jack Couto and his Supra and Michael Hurley and his GTR taking second and third respectively. Torres and Hurley went out in round two, followed by Couto in the third, however, and Conant and Farkouh advanced to the finals. Before the racers staged, Conant's GT500 refused to start, but Farkouh shut his car off and waited in a sign of true sportsmanship. Finally. Conant was able to light off the Mod Motor machine and both drivers staged for the showdown. Both drilled the tree hard, but Farkouh knocked the tires off and Conant streaked to the stripe first with a 7.15 to Farkouh's 10.14. 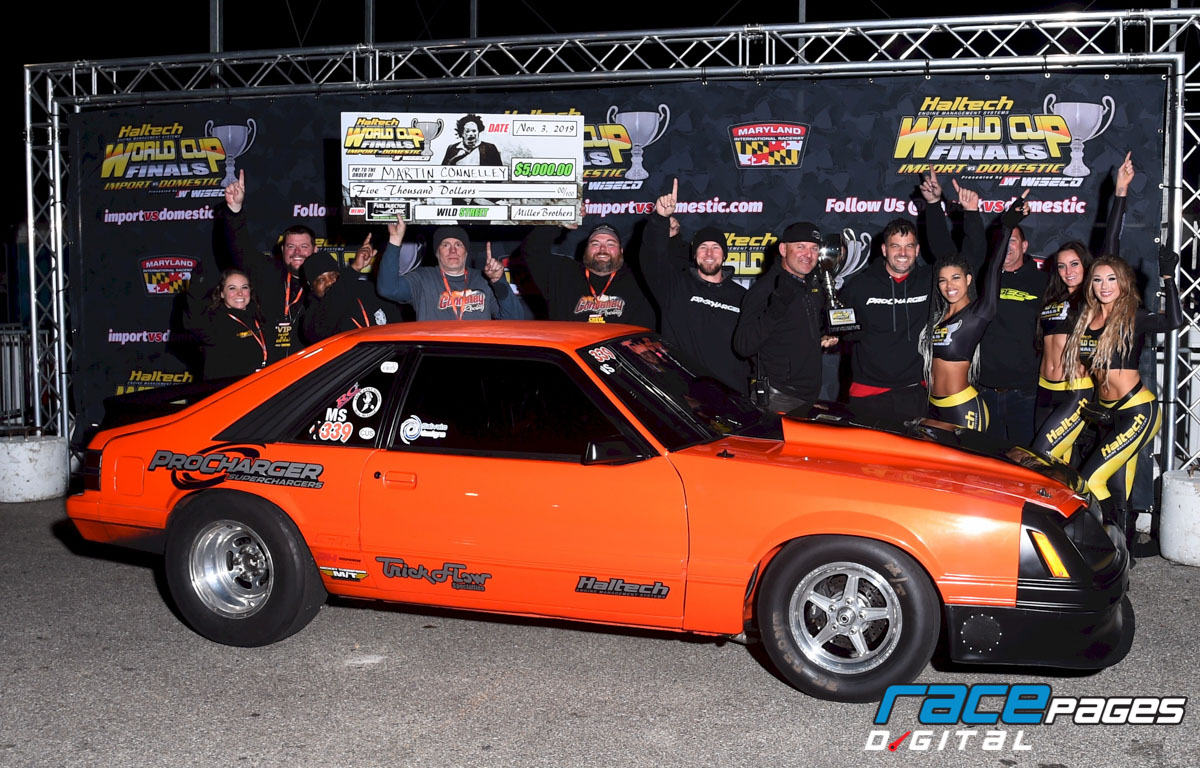 Twenty-eight cars entered the Fuel Injector Clinic Wild Street category that featured a wide range of cars and engine combinations. Jonathan Atkins topped the qualifying sheet with a 7.30 from his '97 Camaro, while NMRA racer Martin Connelley grabbed the second spot and NMRA True Street competitor Yandro Ulloa took third. Â Other notable NMRA racers included Eric Bardekoff, Bob Cook, Tommy Annunziata, while the NMCA's John Langer, David Theisen, John Snyder, Shawn Finn, and Leonard Long joined in to represent the domestic side of the class. When the final round came, it was Connelley facing Atkins with the former taking the starting line advantage and the win with a 7.48 to Atkins' 7.66 effort. 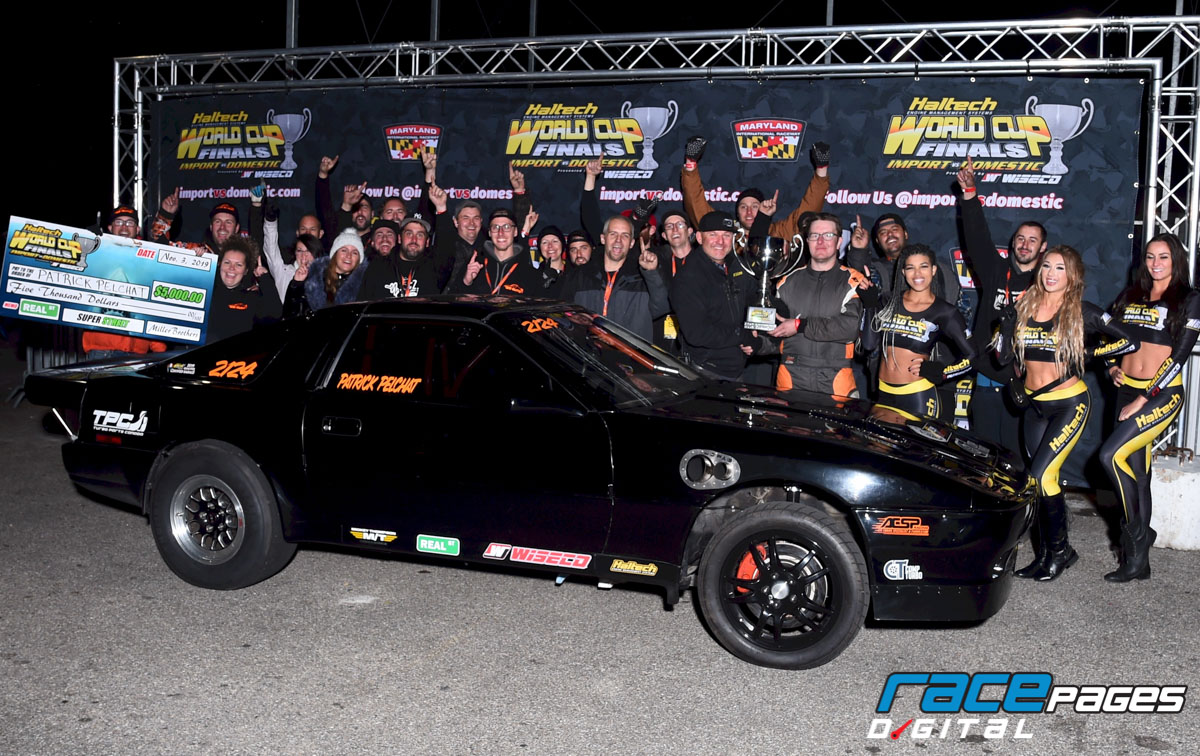 Of the 32 cars in the Real St. Performance Super Street class, only NMRA racers Shane Stymiest and Charlie Barnes represented the domestic contingent in the class that was largely dominated by Honda Civics. Jason Ostrem of Cave Creek, Arizona, topped qualifying with behind the wheel of his 1996 Civic with a 7.992 elapsed timethe top eight cars were only separated by a tenth of a second, so the competition was as tough as it gets. While Barnes managed to go two rounds before bowing out, the odds were in the imports favor on this one. Patrick Pelchat, who dispatched Stymiest in round one, drove his Toyota Supra to the final round where he faced Jason Hunt and his '99 Civic. The race was over at the start, though, as Hunt went -.095 red and handed Pelchat the final-round victory. 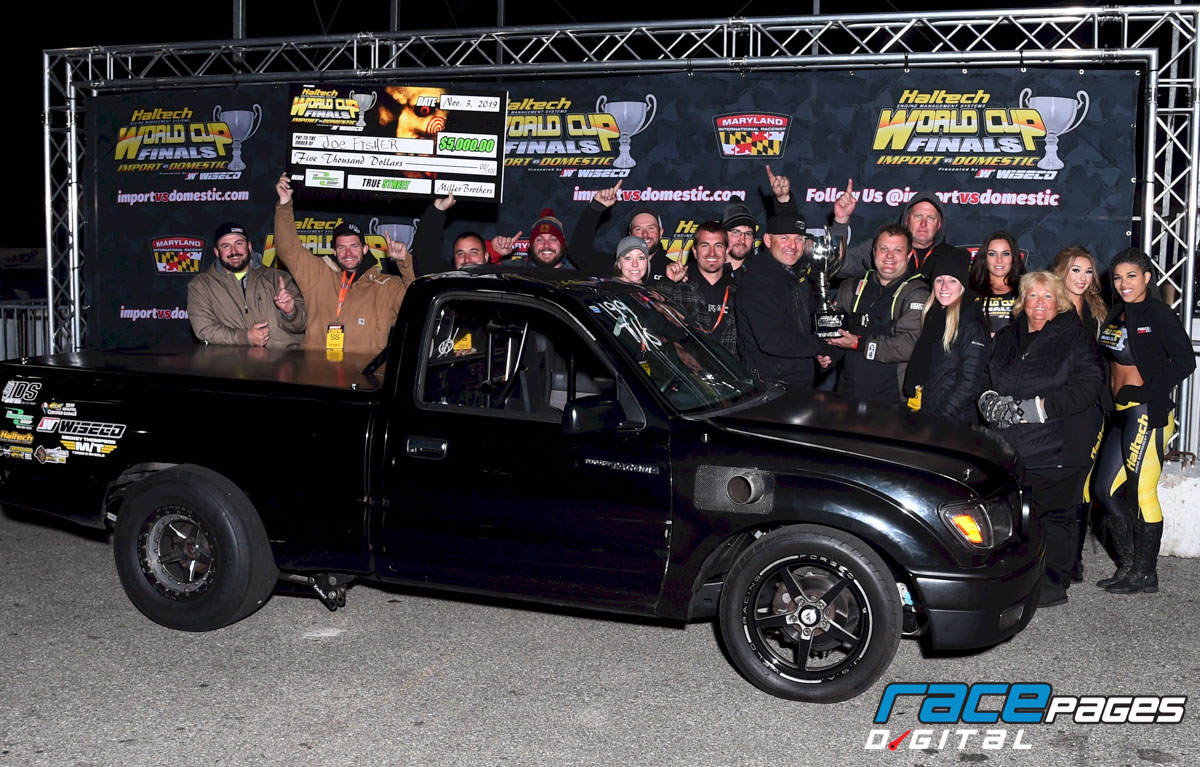 The Driveshaft Shop True Street class featured just a handful of domestics in a 32-car field, including Jeff Bardekoff, Adam Dean, 2019 NMRA Limited Street champion Mike Ciborowski, Trent George, Brian Devilbiss, Joey Hagans, and Mike Washington. While Washington managed to reset the ET record for a naturally aspirated Ford Coyote engine with an 8.56 performance, it was Joe Fisher and his 1997 Toyota Tacoma that set the pace in qualifying with an 8.10 at 167 mph. Luck was definitely on Fisher's side for this race, as his only real competition came in the first round where we put Jayson Bello on the trailer with an 8.63-to-9.11 victory, and the final round where he faced Raif Fejzo and his 2005 Mitsubishi EVO. While most of Fisher's opponents failed to make a run, we went deep into the 8s in most of his elimination rounds, and his 2JZ-swapped Tacoma powered to an 8.22 to take the win over Fejzo who drove to a quick, but losing, 8.87. 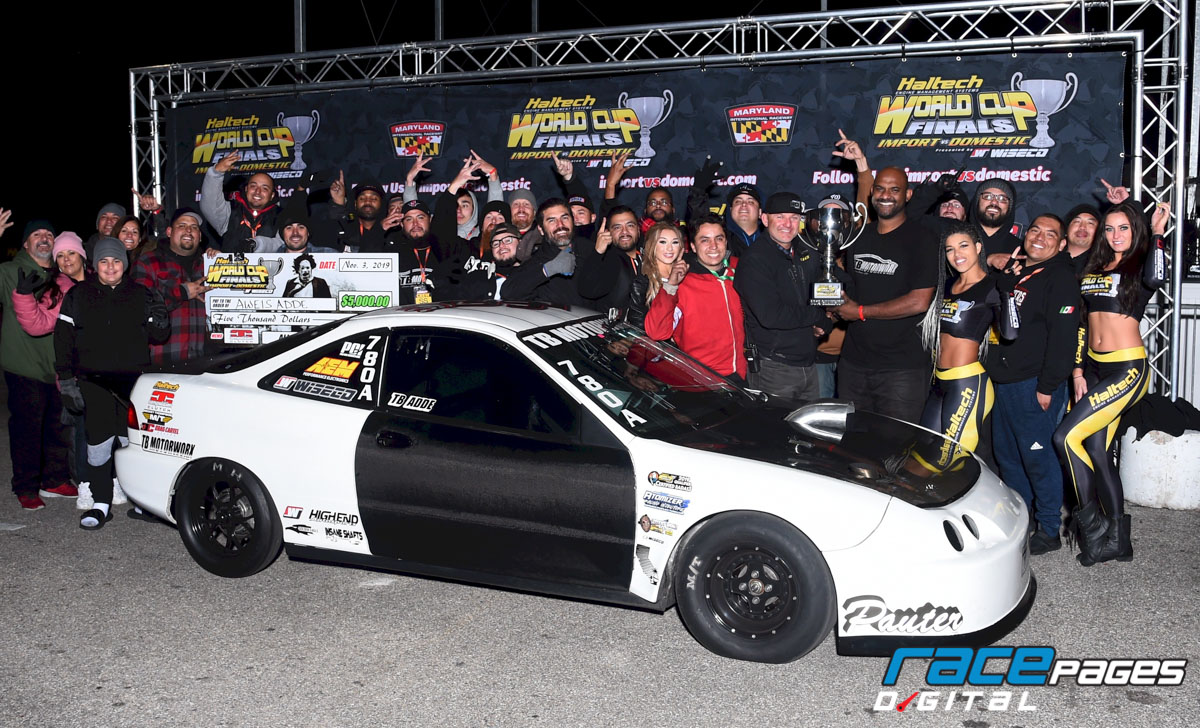 Competition Clutch All Motor is one of the most popular classes for NMRA and NMCA racers, in particular those who compete in the sealed crate motor Coyote Stock and Chevrolet Performance Stock classes. They swap out the locked ECMs for ones with a hot tuneup, drop a bunch of weight, and let it all hang out in this class that also features the world's baddest all-motor, front-wheel-drive machines as well. Ronnie Hackelton had one mean engine built for his former Chevrolet Performance Stock CRC Camaro, and the 750-plus-horsepower powerplant pushed the Camaro to the top spot in qualifying with a 9.11 at 145.99 mph. NMRA Pure Street champion Teddy Weaver grabbed the second spot with a 9.22 and Marcos Oliva took third with a 9.25 in his '89 Honda CRX. The NMRA was well represented with a number of past and present champions on the qualifying sheet, including Dan Ryntz, Nathan Stymiest, Gary Windsor, Mike Bowen, Walter Baranowski, and Carlos Sobrino. They joined the NMCA's Keith Vaughn, Shawn Calabrese, and Taylor Lumsden. By the semi-finals, the domestics had the field narrowed down with just the lone Acura Integra of Aweis Adde in competition. Adde unleashed an 8.75 to defeat Hackelton, and a red light by Weaver in the final round gave Adde the victory! 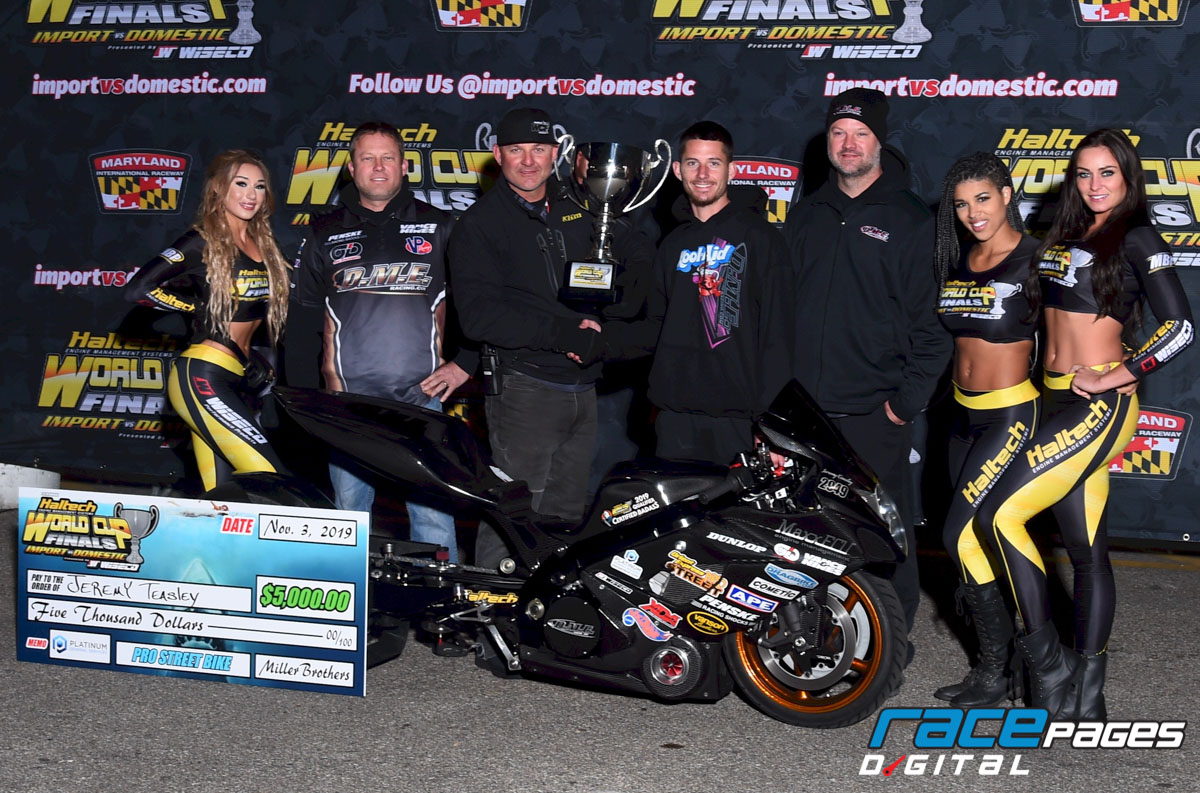 In the Platinum General Services Pro Street Bike category, nary a domestic two-wheeler was to be found, with just Honda and Suzuki representing the class from a manufacturer standpoint. Jeremy Teasley of Columbus, Ohio, topped qualifying with a 6.42 at 226 mph, and he continued his dominant performance all the way to the winner's circle after defeating Frankie Stotz in the 6.56-to9.77 final round. 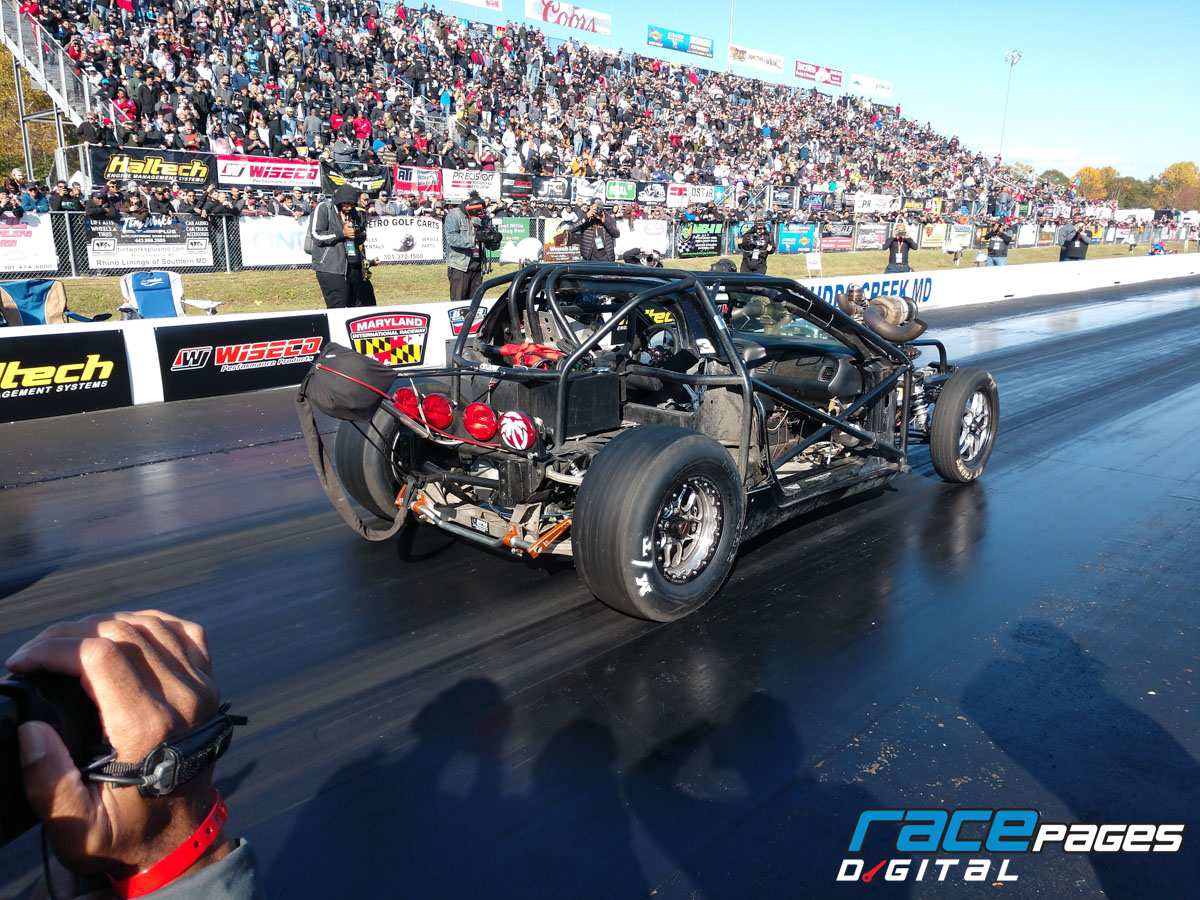 Rounding out the event was the Fuel Injector Clinic Wild Street 6-Speed Shootout, which pitted the eight quickest stick-shifted Wild Street machines in a heads-up competition of their own. The class also largely represented the very quickest H-pattern transmission-equipped vehicles in the world, with several of the racers having claimed the all-time record at some point. YouTube's Cleetus McFarland, Jonathan Atkins, Yandro Ulloa, and Joel Grannas all advanced in the first round, with Grannas's Supra defeating Atkins' Camaro and McFarland's Corvette taking out Ulloa's Minion Mustang in the second round. In the final, McFarland grabbed the starting line advantage and never looked back, taking the win with an 8.25 over Grannas' 8.83 run. The World Cup Finals: Import vs. Domestic celebrated it's 24th anniversary this year and the event, which brings in racers, spectators, and vehicles from all over the world, continues to close out the drag racing season in the biggest of ways.