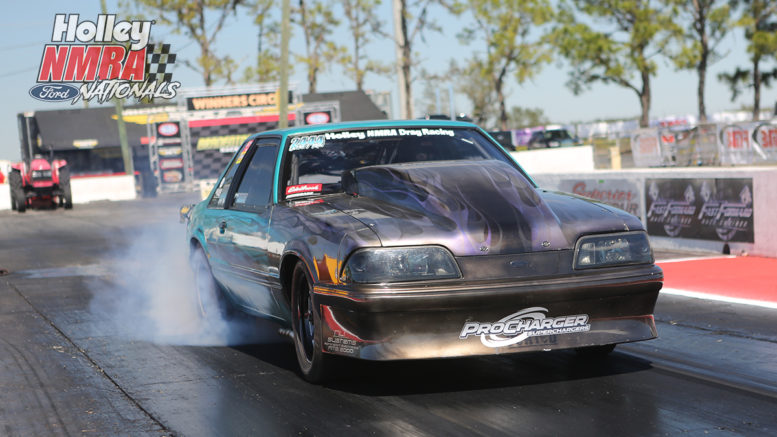 Stephen Barnett helped kickoff the BMR Suspension NMRA Spring Break Shootout at Bradenton Motorsports Park with his flawless 1990 Mustang LX coupe. His final ET was only a 4.90 but the incremental times show he will be a force to reckon with this weekend in Edelbrock Renegade. The car is powered by a 400ci small-block Ford that wears a set of Trick Flow High Port cylinder heads and gets from a ProCharger F-1A-91 centrifugal supercharger.

This weekend the NMRA is hosted the Watson Racing Cobra Jet Showdown Presented by Ford Performance. One of the more interesting vehicles entered in the category is the 2010 Cobra Jet that is powered by a Ford Performance 7.3L "Godzilla" engine. The car hustled down track with a 10.32 at 128 mph on its first hit of Thursday's test session.

Eric Bardekoff is back in Edelbrock Renegade with his flawless 2015 Cobra Jet clone, which he built from an empty shell at his EB Custom Works shop. A Whipple supercharged, Coyote 5.0 sits under the carbon fiber hood. Bardekoff ran 1.11 sixty-foot and a 4.71 at just 145 mph, picking up where the team left off last year. The goal is launch the car right into the 4.60s by the time qualifying kicks off on Friday.