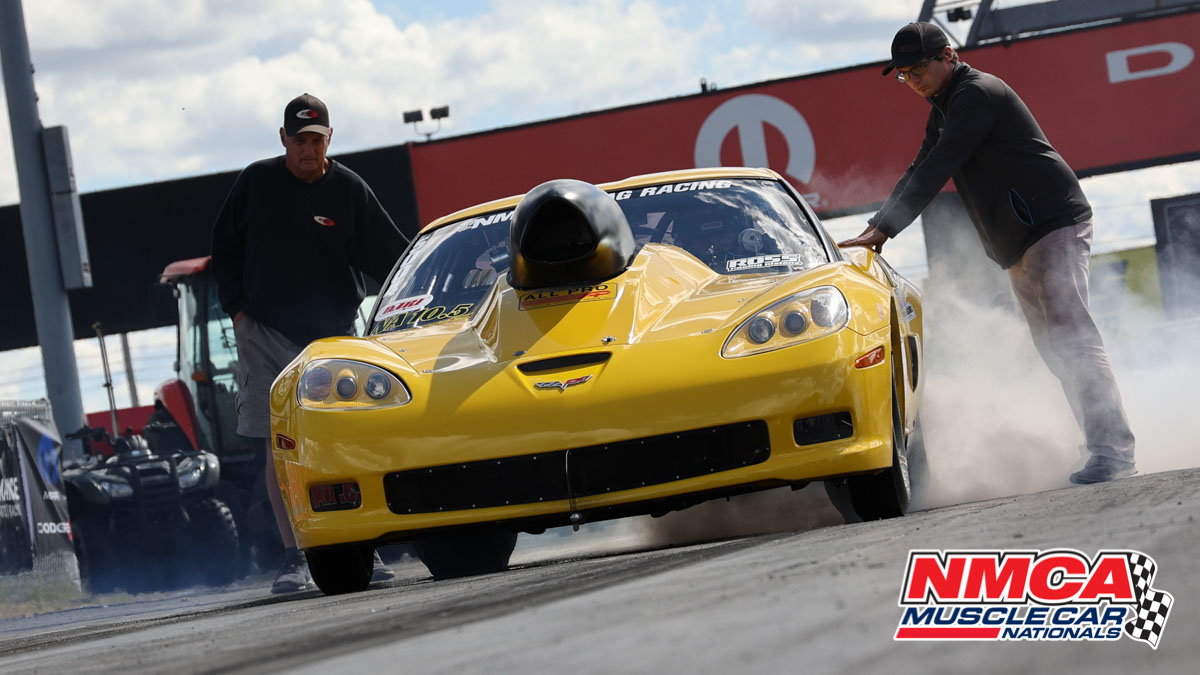 While the chase to the 2021 NMCA Muscle Car Nationals championships began back in March, racers have remained unflinching and unwavering despite all of the competition, challenges and calamities that came their way. Starting today at the final race of the season, the 20th Annual NMCA World Street Finals presented by Chevrolet Performance at Lucas Oil Raceway in Indiana, they'll focus on finishing what they started. Stay with us for continuous coverage throughout the weekend, including qualifying, eliminations, news, photos, a race wrap and more. You can find today's schedule at the bottom of the page. GET QUALIFYING RESULTS HERE 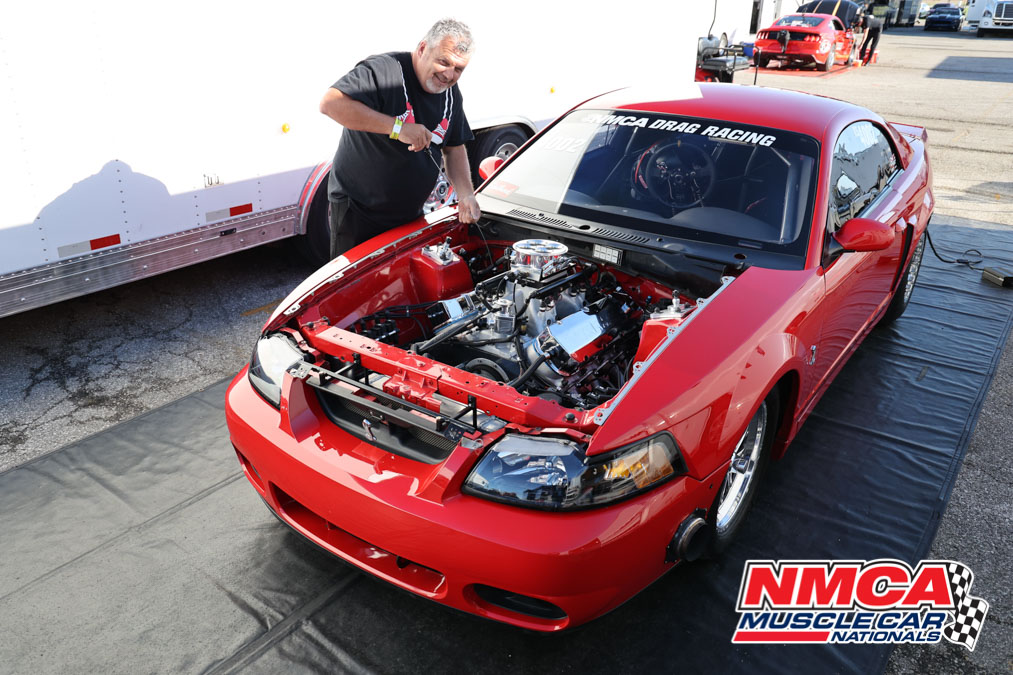 RPM Transmissions' Rodney Massengale is widely known for his GM-based race cars, and he and his son Camren have been campaigning a Corvette for the last several years in Edelbrock Xtreme Street. They decided to move to a big-block Chevy/nitrous combination, and while they were having BES Racing Engines build a new engine and were working to fit it in the Corvette when this Torch Red 2004 Mustang SVT Cobra popped up for sale, replete with a TRE Racing Engines 588ci big-block/nitrous combination. Massengale re-plumbed and re-wired the car, and added some Menscer Motorsports shocks. He debuted the car at the last race in Norwalk, and is whittling away on the Holley EFI to improve the pony's performance. 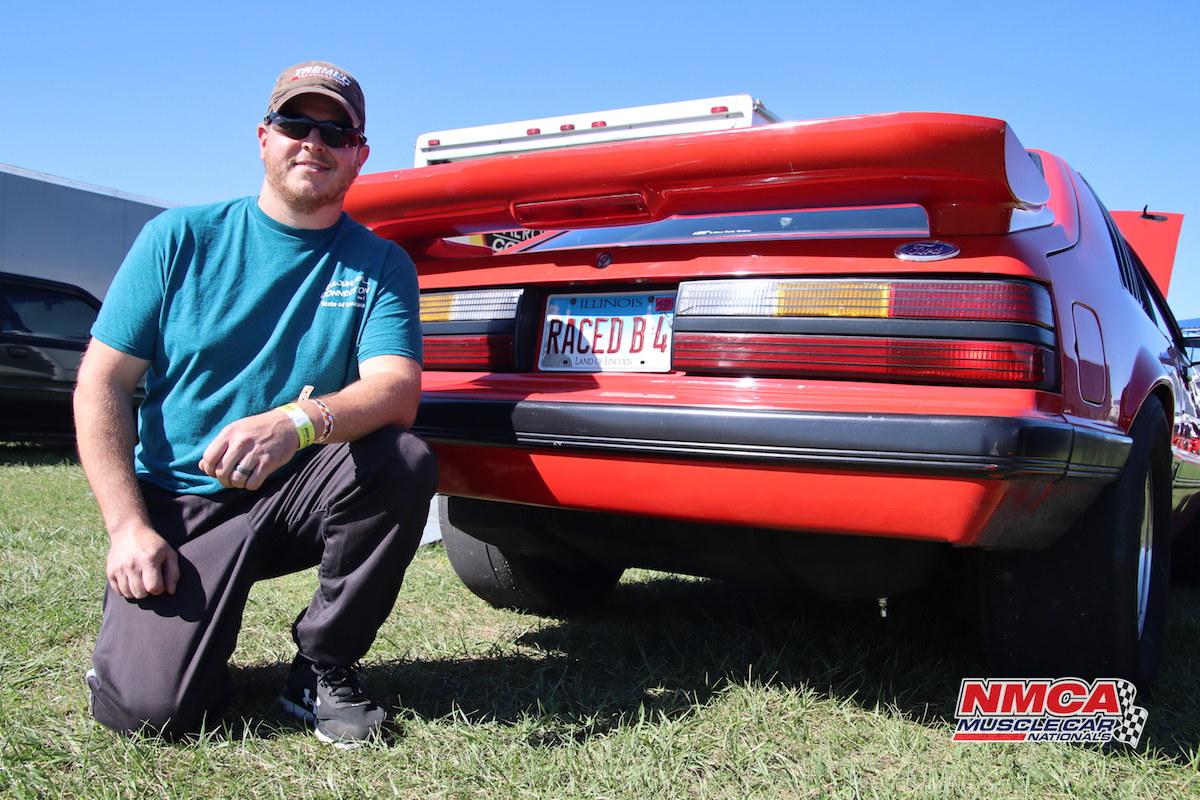 Matt Caldwell of Illinois has been racing his 1986 Mustang in NMCA TorqStorm Superchargers True Street and NMRA QA1 True Street for several years, and in addition to having a lot of fun in that time, he has had a lot of success. That includes two 9-second wins, a 10-second win, an 11-second win and a runner-up in the car which has had various combinations but currently hauls with a 351 cubic-inch Windsor engine, Borg Warner S475 turbo and C4 transmission. I like everything about the category, said Caldwell. It's a fun way to race my street car, which I also take to cruise-ins and Cars and Coffee events. 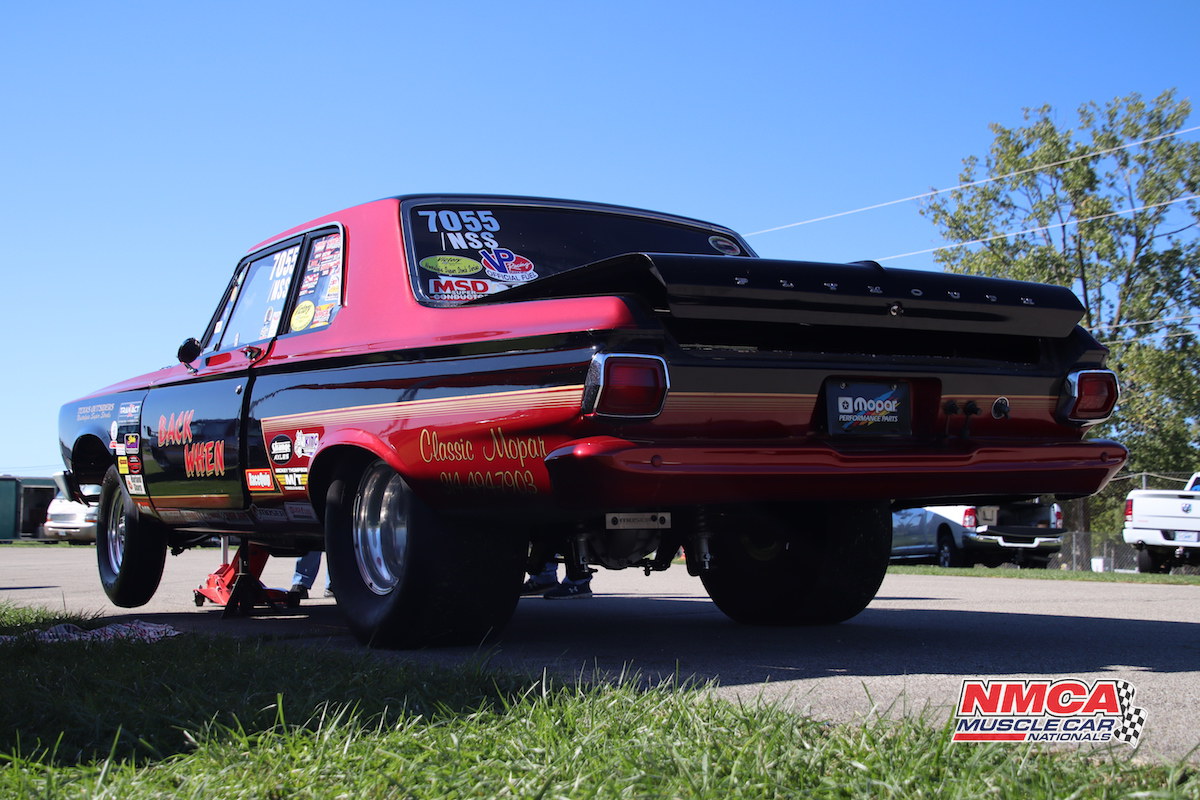 Rocco Addesa made the trip from Kentucky to take part in Quick Fuel Technology Nostalgia Super Stock and the Dave Duell Nostalgia Super Stock Classic for the first time. He just purchased his beautiful 1965 Belvedere with a 500 cubic-inch Wedge a few weeks ago, and is getting to know his new car. In testing last weekend, he experienced carburetor and brake line issues, and in testing yesterday, he experienced wobbly tires, and took them off-site to be balanced. His fiancee, Elisabeth Jackson, is helping him this weekend, and they're hoping for some clean A to B passes in qualifying today. 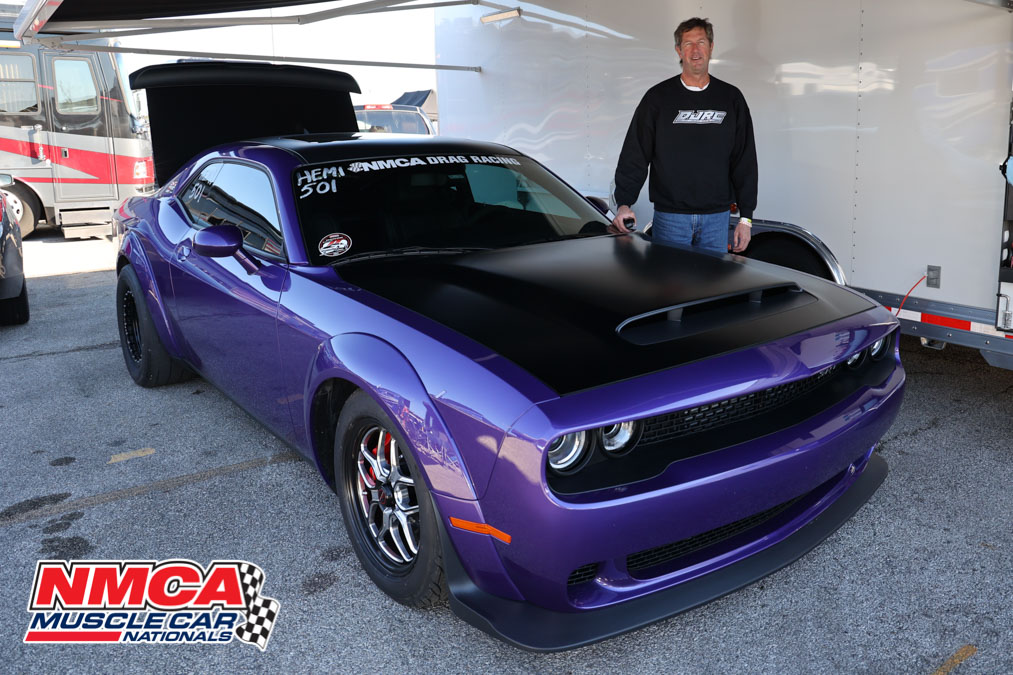 When Ted Hughes last visited the NMCA, he was competing in Holley EFI Factory Super Cars andChevrolet Performance Stock with a pair of COPO Camaros. The longtime drag racer and road racer has since sold those, and purchased a pair of Dodge Demons. One has just 50 miles on it and isn't driven, while the other is this Plum Crazy 2018 Demon that he has entered into the Dodge MOPAR HEMI Shootout this weekend. Hughes purchased the car to drive and made his first drag strip passes yesterday in it. A 10.24 was his best pass, and he's looking to improve on that as the tires spun on the first two shifts. The Nebraska native is also hanging out with his friend and chassis guy, David Janes, who is competing in VP Racing Lubricants Xtreme Pro Mod this weekend. 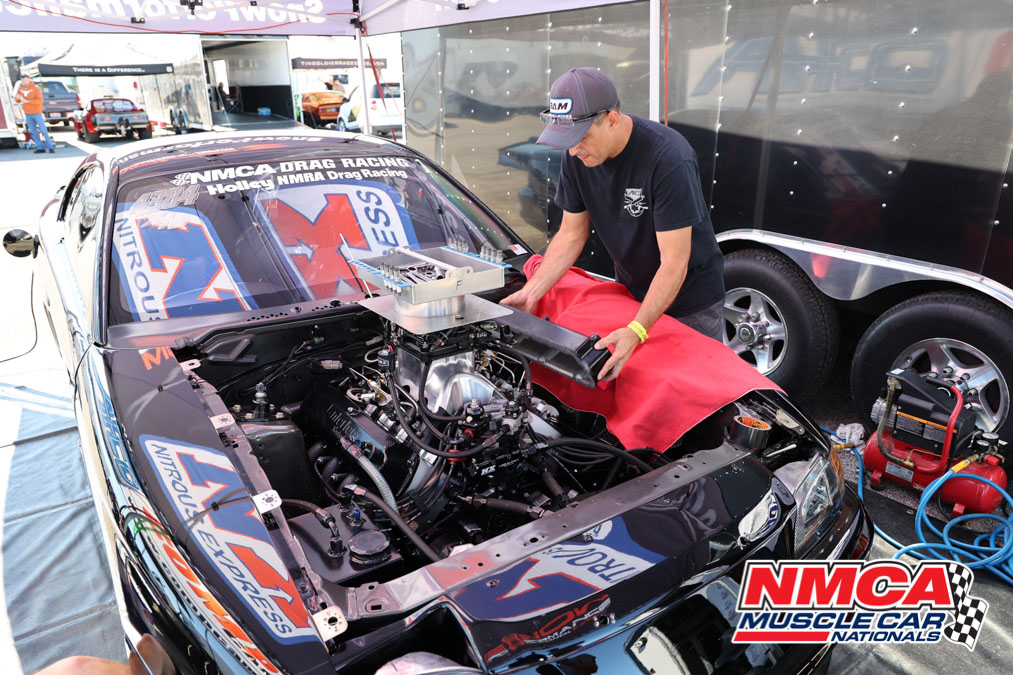 After Tim Knieriem and his team were warmed up their Edelbrock Xtreme Street machine prior to the first round of qualifying, they checked the spark plugs and upon reinstalling them, found some threads on one had been stripped, so they were thrashing to make that repair to be able to make the first round. Knieriem noted that the same thing happened here in 2019, and that the team went on to win the race. Here's to good omens. 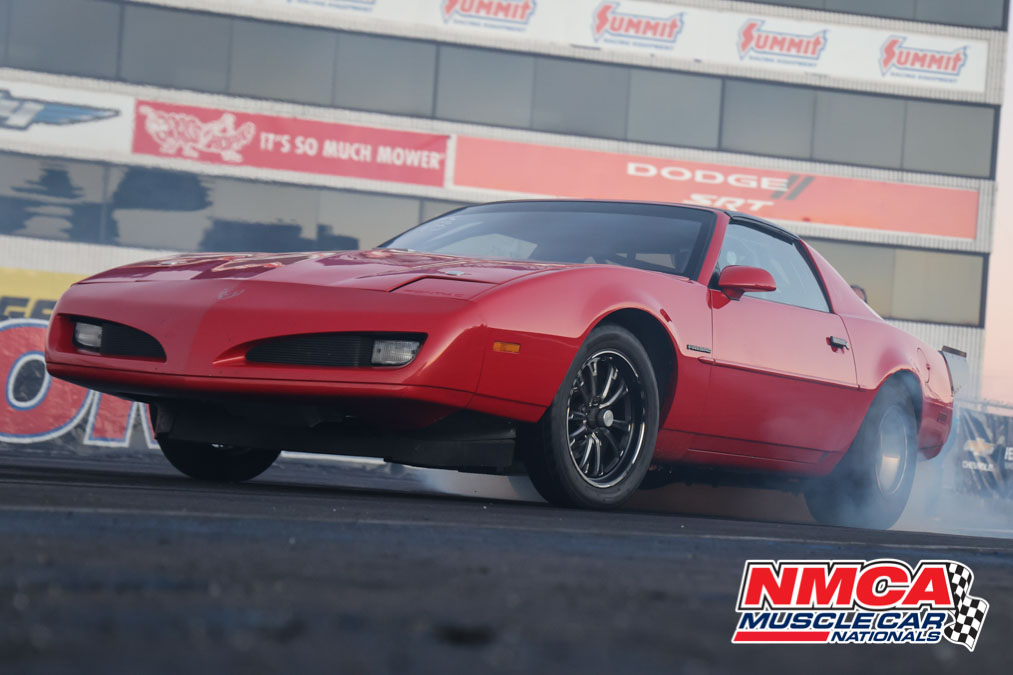 TorqueStorm Superchargers True Street is always an exciting class to watch, as you never know just how quick some of the cars are. Indiana native Justin May owns just one such car, as his 1991 Firebird is capable of running 7s at over 180 mph. With a turbocharged LS engine making 1,900 or so horsepower under the hood, his car looks like the one to beat so far. 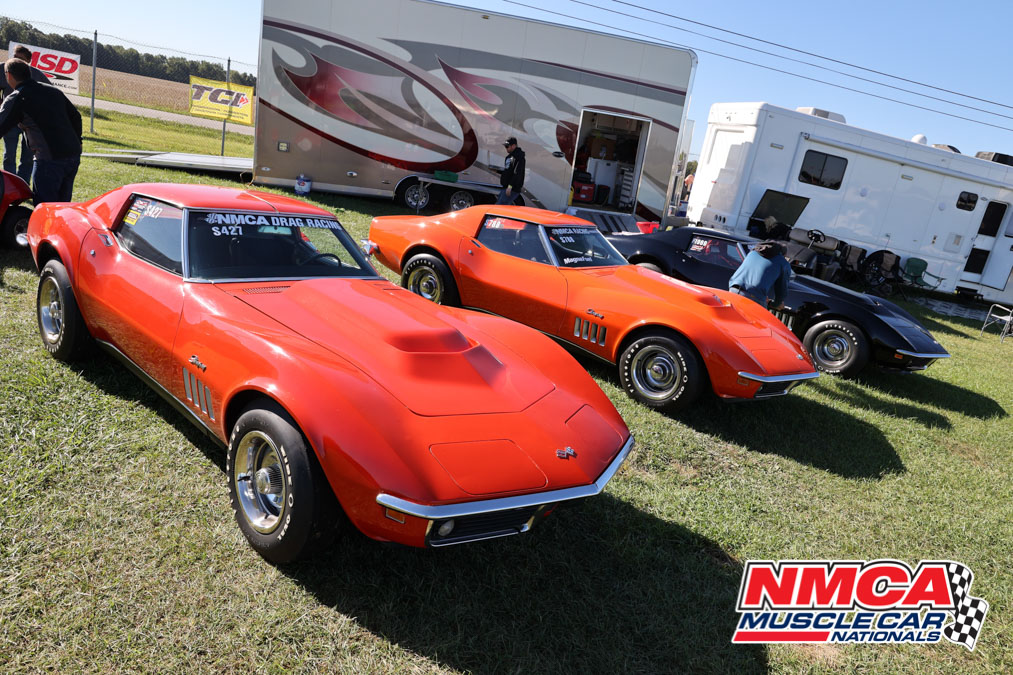 The Factory Appearing Stock Tire racers are in attendance this weekend, and a slew of big-block Corvettes lead the charge. The black one belongs to Terry Pennington, and currently holds the FAST record with a staggering 9.45, just as you see how the car sits. Terry's wife Julie drives the orange Vette in the middle and recently made the switch to FAST from Factory Stock. Both cars run BES Racing Engines big-blocks. Ed Keim owns the Corvette on the left, and competes in Factory Stock, which has much more aggressive rules. 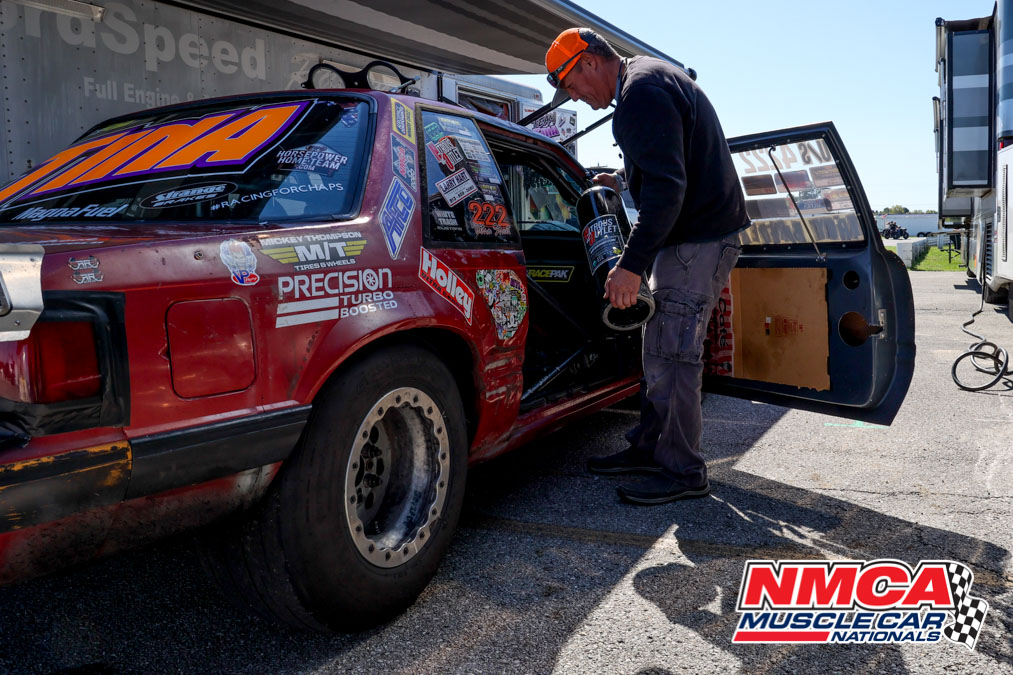 Edelbrock Xtreme Street racer Kirt Sanders has been struggling this year with his big-block/nitrous combination in his Mustang coupe, Tina. Tina may look a little rough around the edges, but she's a git-r-done sort of girl and never backs down from a challenge. 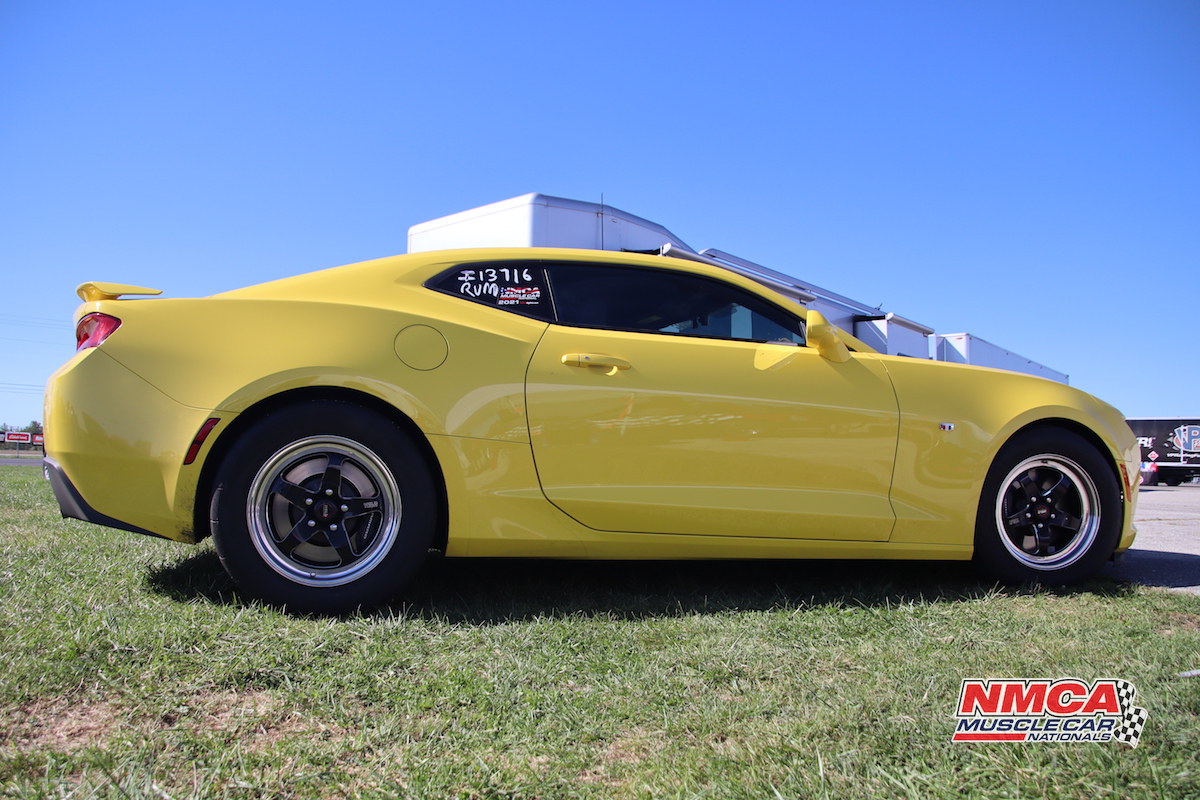 For several years, Bryan Benge has driven his 2016 Camaro SS from his home in Santa Claus, Indiana to NMCA events to compete in Proform Rumble presented by Chevrolet Performance. The car powered by a 6.2L engine carried Benge to a 12.33 in a test pass today, and he's hoping it will settle in a bit closer to his 12.25 index in qualifying today. I'm one of the few racers in the category who drives their car to the races, which is pretty cool, and now I'd like to win a race in it, said Benge. It will definitely take several good back-to-back runs. The competition is tough. 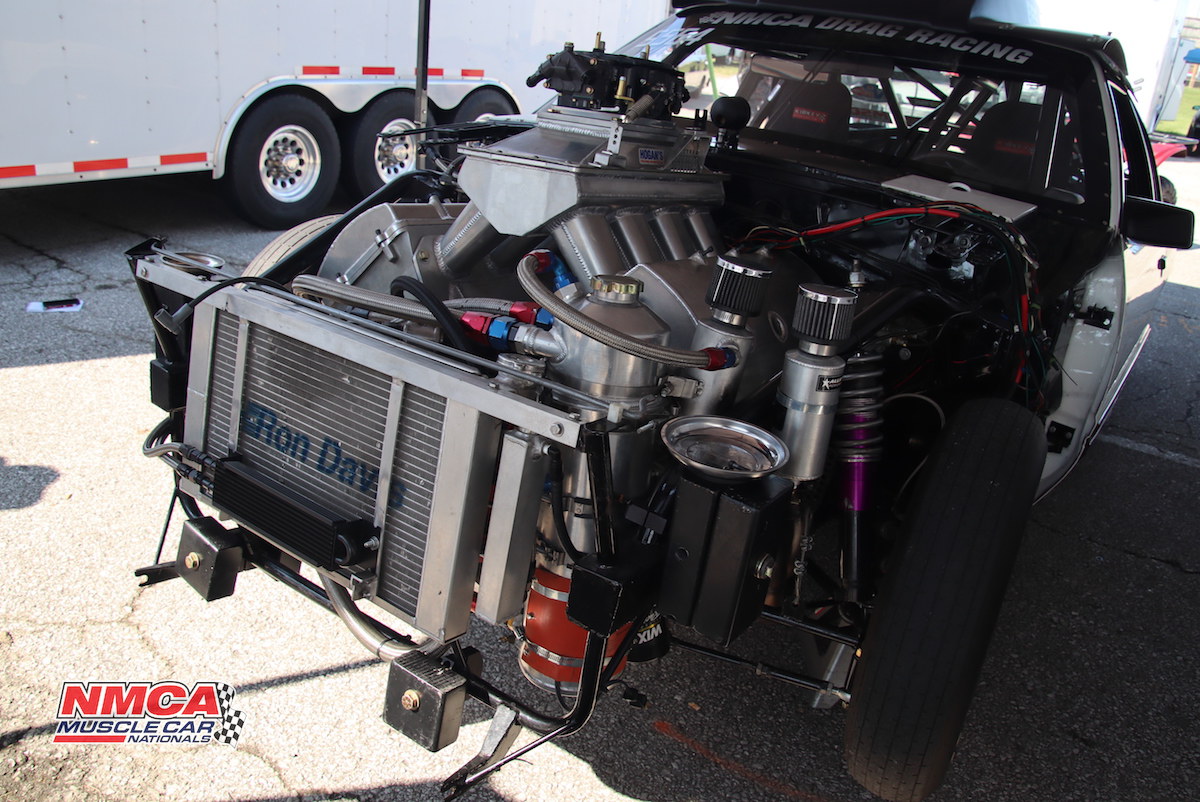 Kevin Cody may be new to the incredibly competitive Dart NA 10.5  category, but he's definitely making headway. He ran a personal best of 8.07 at 179 mph on a test pass yesterday in his Capri, but discovered when he went to warm up his BES-built 700 cubic-inch Ford Hemi today that he had a broken lifter. We're done for the season, but we'll definitely be back in Dart NA 10.5 next year, said Cody, who has a lot of help from longtime friend Lenny Hughes. I love the class, and all of the racers in it are awesome. 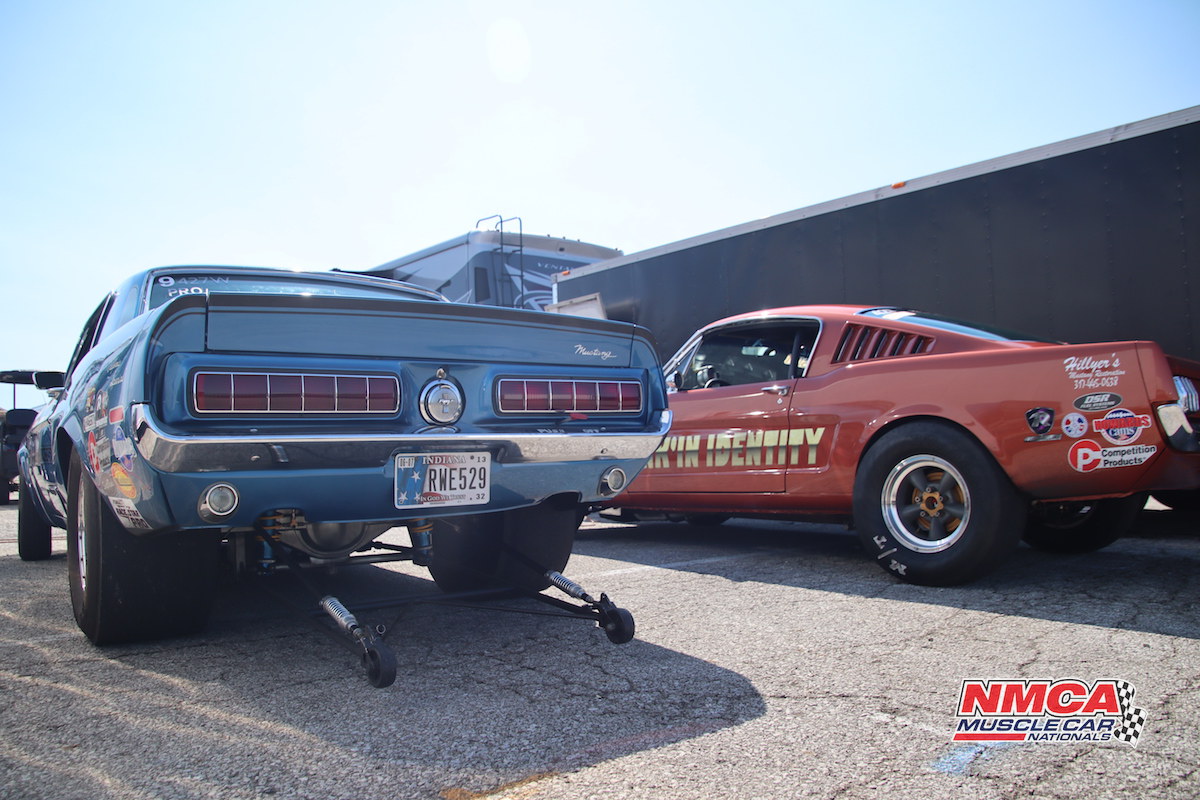 Indiana resident Greg Hillyer is racing his blue 1968 California Special Mustang and his amber 1966 Mustang at the 20th Annual NMCA World Street Finals presented by Chevrolet Performance this weekend at Lucas Oil Raceway. The blue 1968 California Special scoots to low 10s with a 427 cubic-inch engine in MagnaFuel OpenComp, as well as in the NDRL series, and the amber 1966 Mustang muscles to low 11s with a 347 cubic-inch engine in Bracket. Hillyer will have his hands full as he focucsed on going rounds in both categories. 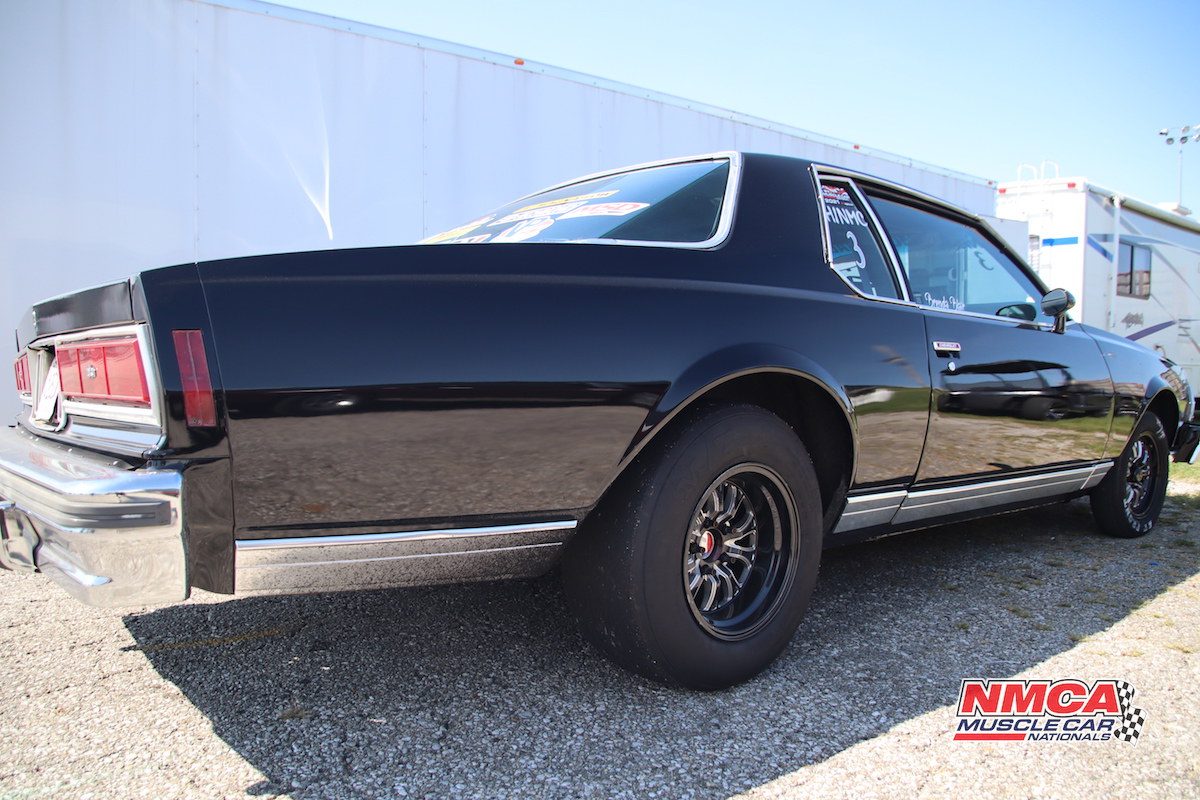 Brenda Blair began her season with a win in Detroit Truetrac Nostalgia Muscle at the NMCA Muscle Car Mayhem in March at Bradenton Motorsports Park, and she has continued to go rounds in her Caprice with a small-block Chevrolet under the hood. The car has been so good and consistent this year, and it really has been the best year we have had so far, said Blair, who is currently qualified in the fifth spot with an 11.76 on an 11.75 index. We've been working really hard because we really want to do well. Blair, who finished in third place in points last year and is currently in second place in points, plans to give it everything she has to try to get around points leader and multi-time champion Andy Warren for the class championship at this final NMCA event of the year. Andy is a little more than two rounds ahead of me, so we would have to get really lucky, said Blair, who has help from her husband and crew chief, Kevin Blair. 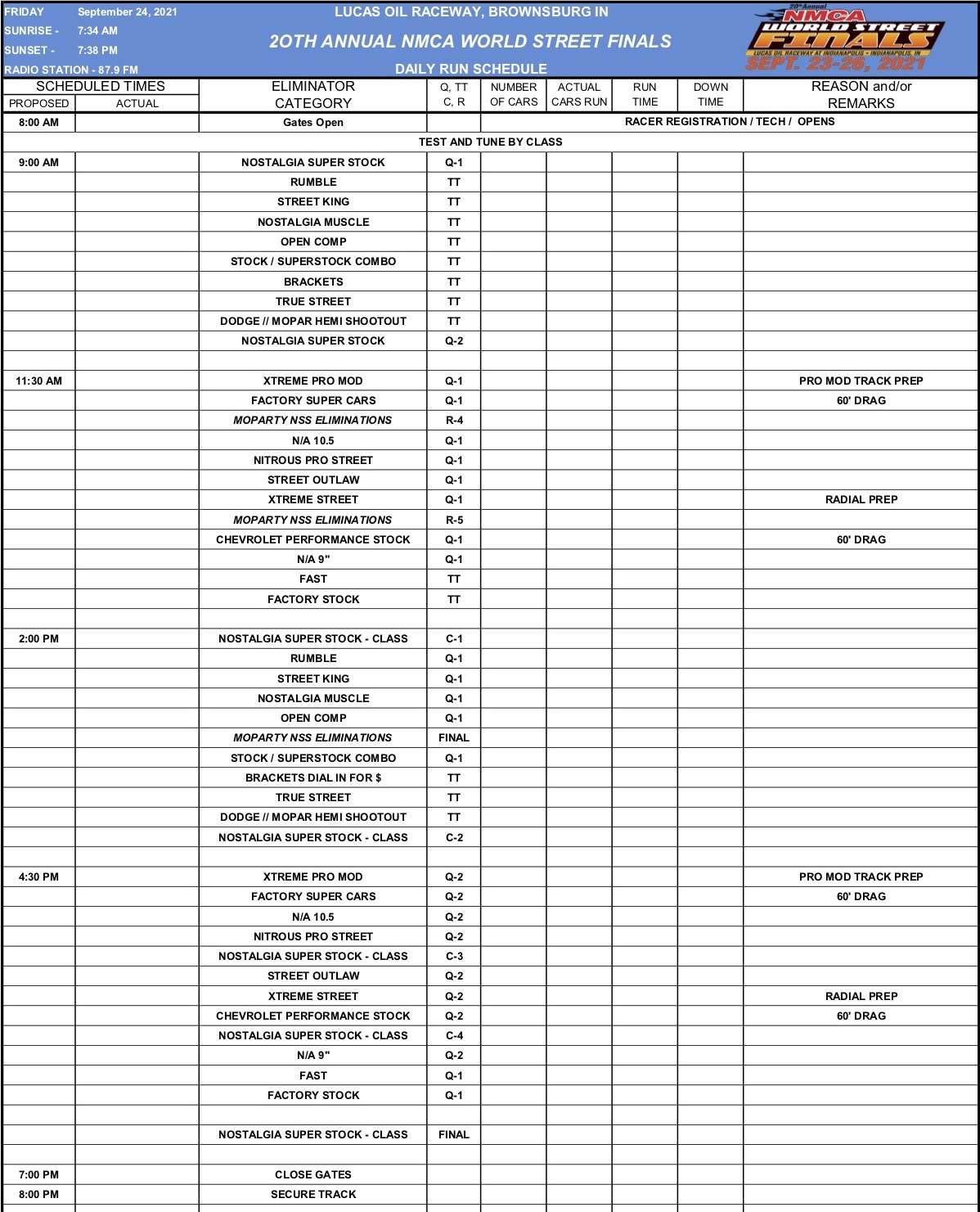