There were a ton of fast passes in favorable weather yesterday at the 20th Annual NMCA World Street Finals presented by Chevrolet Performance at Lucas Oil Raceway in Indiana. There were also plenty of personal best elapsed-times, speeds and packages as racers focused on strong finishes at this final NMCA event of the season. While rain fell briefly this morning, the forecast calls for sunshine and temperatures in the 60s for the rest of the day, so we're in for some incredidble qualifying and racing. We'll have continuous coverage throughout the weekend, including qualifying, eliminations, news, photos, a race wrap and more, and today's schedule is at the bottom of this page. CLICK HERE FOR QUALIFYING RESULTS 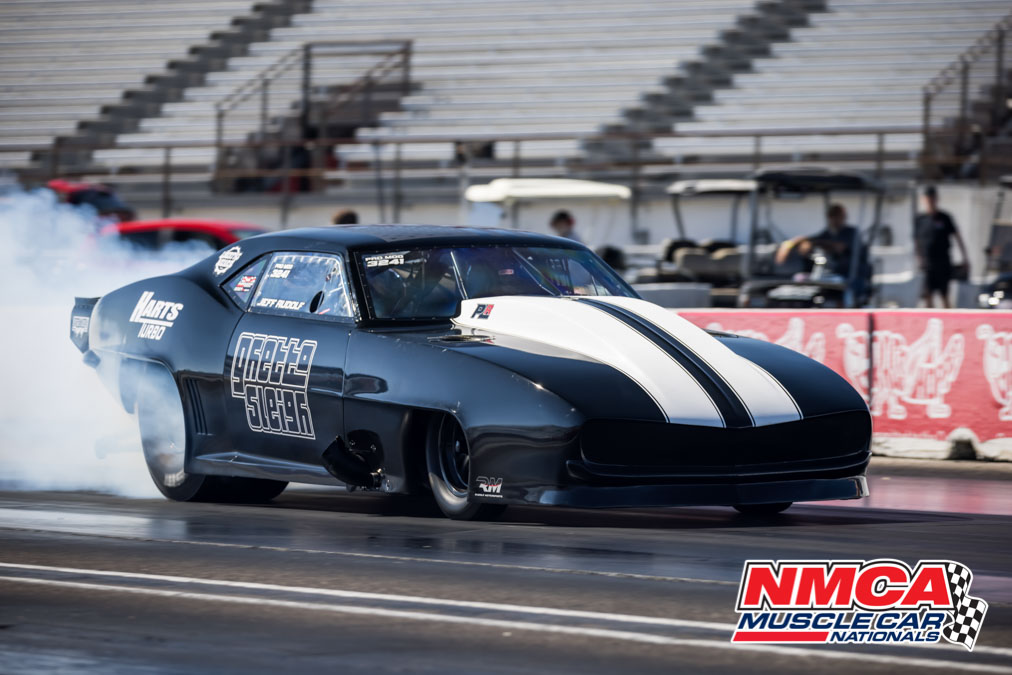 Jeff Rudolf hasn't been running with the NMCA lately, but with the World Finals right in his backyard, he took the opportunity to stretch the legs on his twin-turbo Camaro. And they stretched quite a bit in the first round of qualifying, as he posted a 217.49 mph trap speed, which eclipses the current class MPH record by 10 mph. Rudolf currently sits 6th in qualifying with a 3.82. 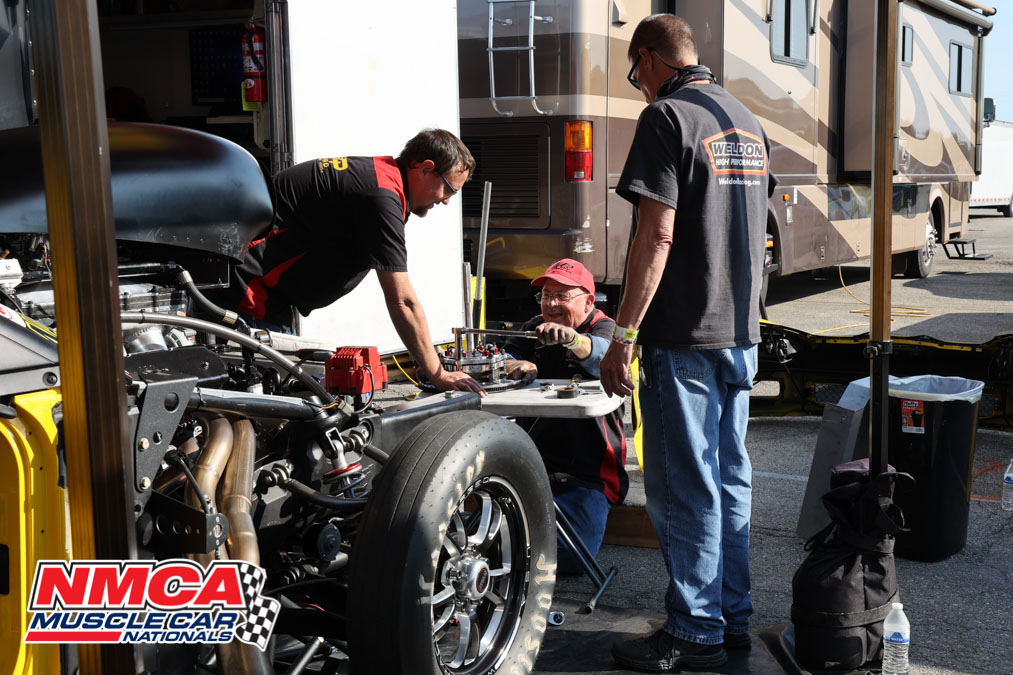 All-Pro Cylinder Heads' Bob Williams (Center) has been competing in Dart NA 10.5 for a few years now with his Corvette, but he recently made some big changes to get to the top of the class. Gone is the 440ci engine, which has been replaced with a more efficient 420ci powerplant that was worth 20 more horsepower. Backing that now is a G-Force Racing Transmissions GF-2000 transmission, and the team has been tinkering with the clutch to hopefully repeat the 7.85 that the car ran in yesterday's late test and tune session, which was the first time the car has been in the 7s. 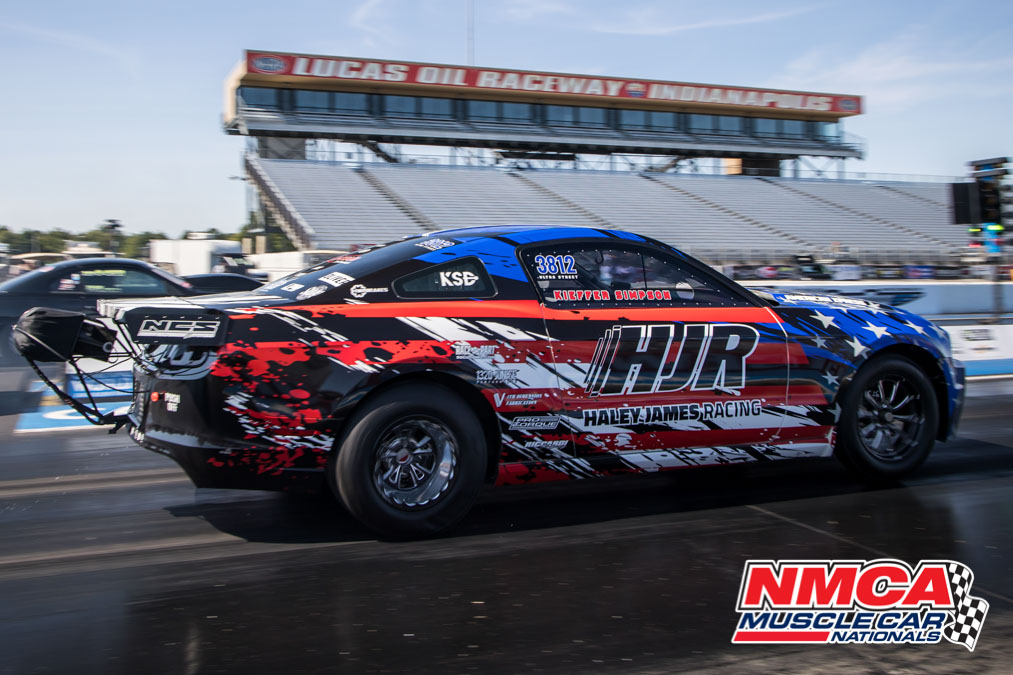 The Haley James Racing team is growing, with Keiffer Simpson getting behind the wheel of a second car. James' father, Dwayne, purchased Jeff Polivka's 2013 Boss 302 Mustang earlier this year and was not only interested in seeing how quick he could make the factory 3-link rear suspension go, but also wanted two cars to double the incoming data to hopefully move the team's performance forward. Longtime Mustang racer Jimmy Dahl is here this weekend with his familiar black Mustang LX, but he's not competing in Xtreme Street. Rather he has entered the Mickey Thompson Street Outlaw ranks. Testing and qualifying has proved to be a good amount of work, as Dahl has changed the torque converter three times in three passes to find improved performance. At the previous race in Norwalk, Ohio, the Factory Appearing Stock Tire final was postponed due to weather and completed here. Current FAST record holder Terry Pennington took the win after Larry Kirkum turned on the red light. Pennington recorded a 9.54 at 144.98, and with good weather this weekend, we could see him reset the record. 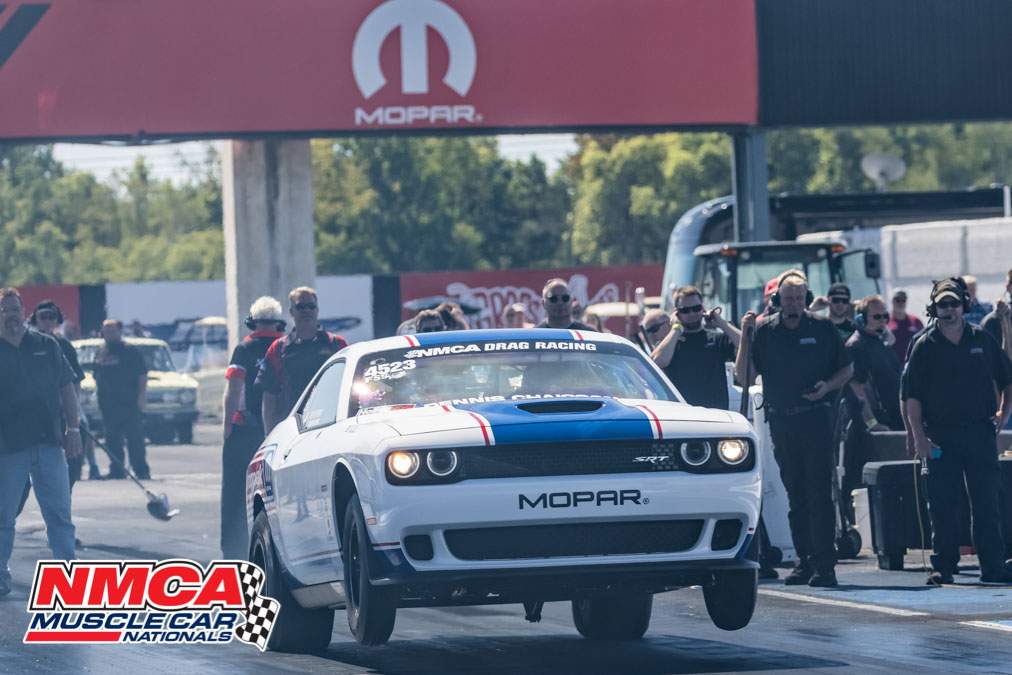 Holley EFI Factory Super Cars driver Dennis Chaisson set a personal best during the event in his 2021 Dodge Challenger Mopar Drag Pak with a 7.93, and then improved on that with a 7.80, making it the quickest 2021 Drag Pak as well. The Watson Racing-built Challenger features a supercharged HEMI built in-house by Kim Mapes, and Mapes' son Kimmy handles the EFI tuning. After two rounds of qualifying, Chaisson sits 5th with a 7.83, behind a slew of  7.7-second Cobra Jets. The Dave Duell Nostalgia Super Stock Classic, named in memory of racer and father of Quick Fuel Technology Nostalgia Super Stock and Coan Stock/Super Stock Combo driver Doug Duell, is a very special part of this event. It was contested yesterday, and Michael Retford ran to the win with a .003 reaction time and a 10.30 on a 10.25 index in his Polara over Mike Moss, who broke out with a 10.23 on a 10.25 in his Biscayne. 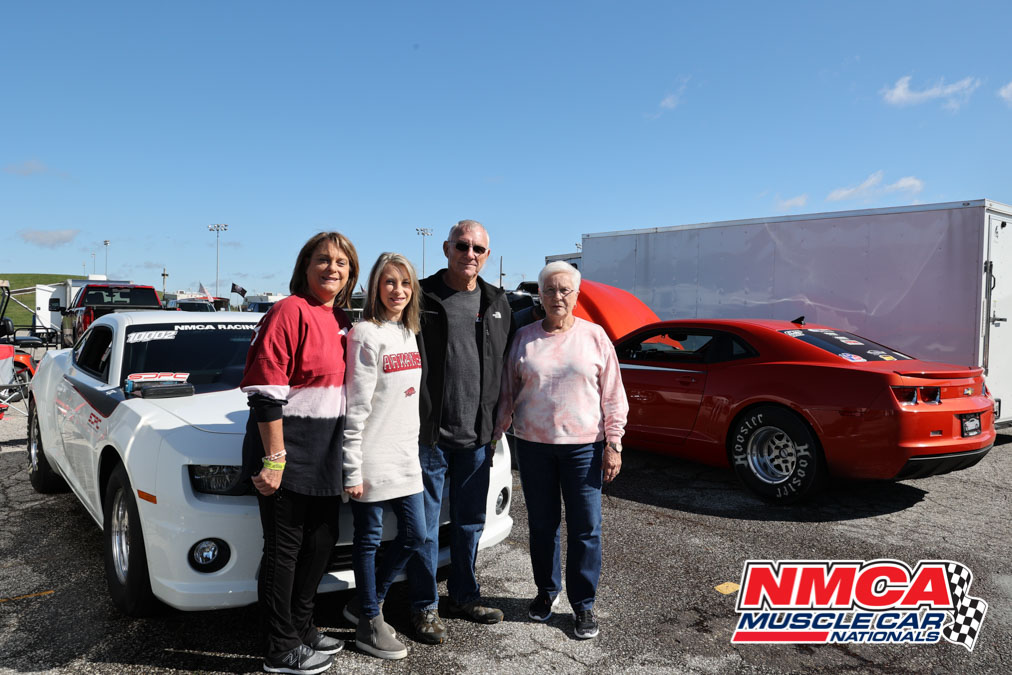 Chevrolet Performance is not only the presenting sponsor of the NMCA World Finals, they are also the class sponsor for the Chevrolet Performance Stock presented by Scoggin-Dickey Parts Center class. After a title battle for the class championship in 2020, Ronnie Hackelton all but has the 2021 championship wrapped up after coming in to this race over 500 points ahead of Glenn Pushis. This event marks the return of Hackelton's granddaughter, Haley Burkhammer, to the class, and the family told us that she will be the team's sole driver in 2022, perhaps behind the wheel of a new 6th-Gen Camaro. Until then, we know where you can buy a couple of Turnkey CPS cars if you're looking to get into the DR525-powered crate engine class. 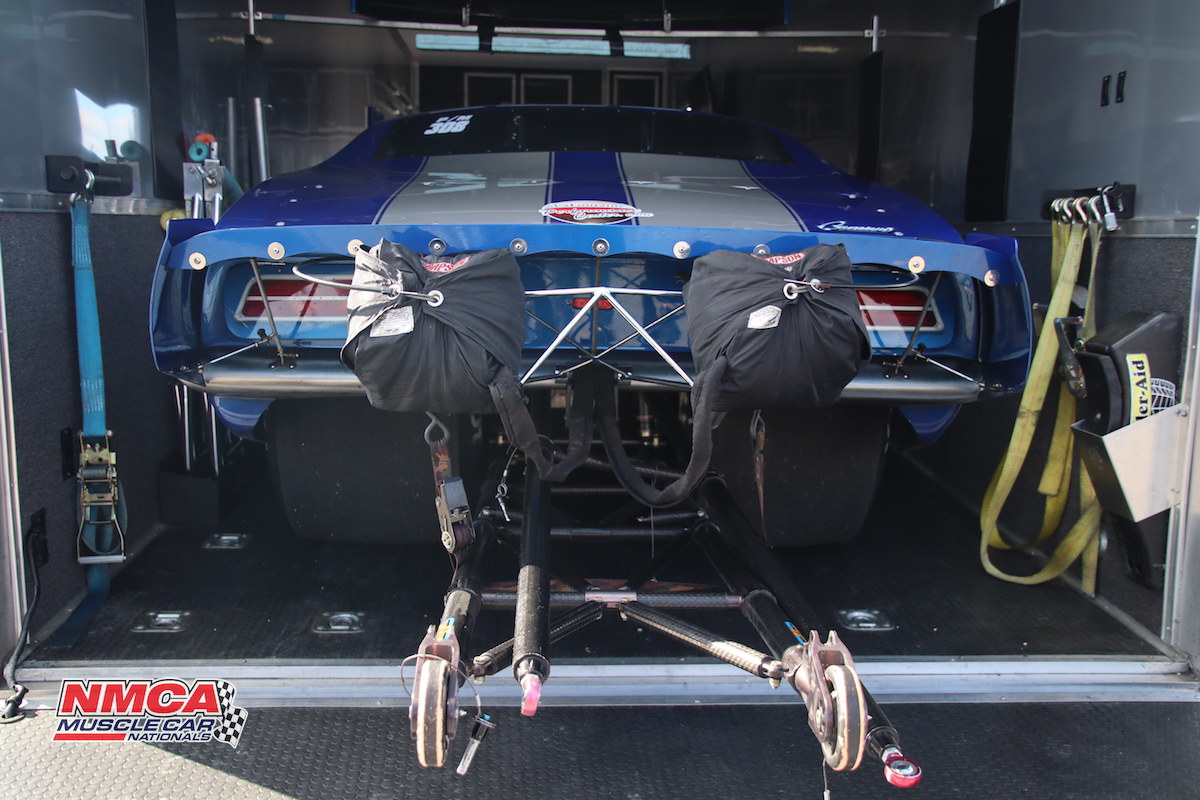 When we stopped by Jackie Slone's pit area this morning, he was having breakfast while his Camaro was hanging out in his trailer waiting patiently to go wide-open throttle. Slone indicated there was not a rush to pull his car out of his trailer before today's third round of qualifying, as it and its nitrous-gulping 959 cubic-inch engine built by Pat Musi Racing Engines were ready to go. Slone, who is currently qualified in the fifth spot with a 3.73 in VP Racing Lubricants Xtreme Pro Mod, said the track feels good and he may put a little more power in his tune-up today. Scott Brown almost didn't make this race after a couple of mishaps with his Chevrolet Performance Stock CRC Camaro. He accidentally backed the car into the wall in his garage and after dropping it off to get repaired, the shop hooked the wrong battery charger up to the car and it fried a good bit of the wiring harness, sensors, and the battery itself. He's continuing to find more issues as the days go on, but we hope they are all alleviated by the time eliminations begin. Tin Soldier Race Cars' Jason Terrell is putting laps on Mike Farmer's Camaro this weekend in Edelbrock Xtreme Street. As if the stock seating position in a Camaro wasn't laid out enough, Terrell found a way to sit nearly flat on the floor to get the weight down low. Dart NA 10.5 driver TJ Strange is here this weekend with something different. He built this Ford Ranger to compete in the DXP Street class, and entered Edelbrock Xtreme Street to test it out. Strange's crew chief and 5-year-old son, Hudson, is making sure the driver does his job this weekend. Fans can count on David Theisen, the 2018 Dart NA 10.5 champion, to be a very competitive contender at every event. He gives his all to go where he wants to go and where he needs to go, whether he's testing, qualifying or racing. In the third round of qualifying today, his Firebird went skyward before slamming down hard. It got on the wheelie bars and unloaded the tires, and when it came down, it bent some stuff up and put a dent in the oil pan, said Theisen, who also had to patch up the front extender on his car. The driver out of Michigan, who is currently in second place in points just behind Leonard Long, will be ready to go in time for the final round of qualifying today.  There's a nice mix of cars in the NMCA Car Show at the 20th Annual NMCA World Street Finals presented by Chevrolet Performance this weekend at Lucas Oil Raceway. Fans who missed the show today can check it out tomorrow. While Jeremy Lyons spent most of last year making upgrades to his Camaro, the Kentuckian returned to racing at the NMRA/NMCA Super Bowl of Street-Legal Drag Racing presented by HPJ Performance in May at World Wide Technology Raceway. He and his overhauled Camaro, powered by a big-block Chevrolet by Knieriem Racing Engines and PKRE nitrous system, are on a mission, and Lyons is currently in sixth place in points despite missing the first two races of the season. Helping him along the away, and here at the 20th Annual NMCA World Street Finals presented by Chevrolet Performance at Lucas Oil Raceway, is his very devoted daughter, Abbee Lyons.