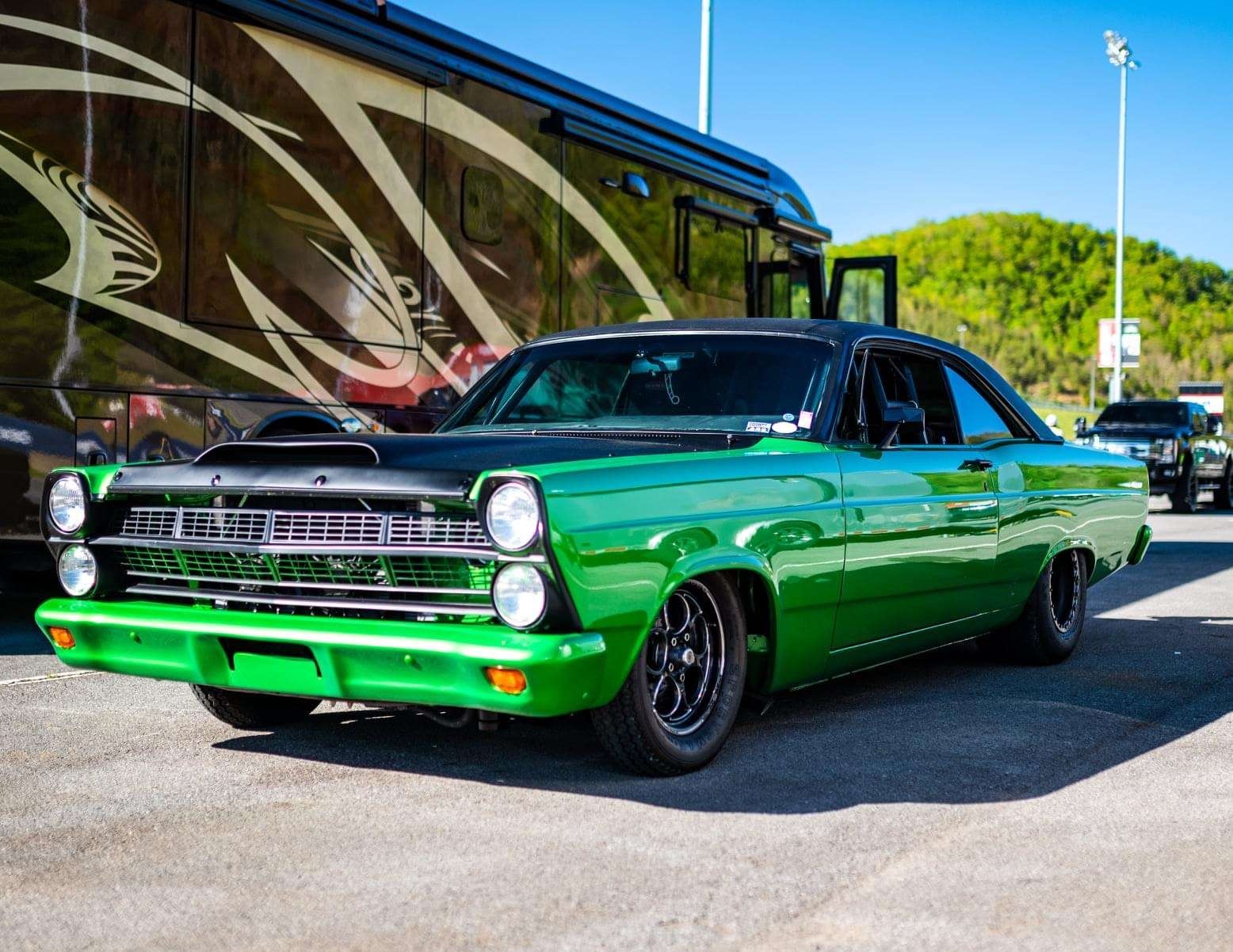 After winning nearly a dozen NMRA True Street events from 2005-2010, Allen Hurley is readying his 1967 Ford Fairlane so he can get back to it in NMCA TorqStorm Superchargers True Street competition for the remainder of the 2022 season and beyond.

The Tennessee native took some time off from racing to focus on his family and growing his cell phone repair business – the latter of which he ultimately sold. In the interim, he coached middle- and high-school sports but it was his then 15-year-old son, Noah, who pleaded with him “to buy some more racecars.”

Hurley figured he’d get some “10- or 11-second slow stuff” to appease Noah, but countless thousands of dollars later and he’s found himself with something significantly quicker. “I wanted something different than what everyone else had but didn’t know what it would be until I found it,” shared Hurley, who spotted the Fairlane online in 2019 and immediately knew it was the one. The Fairlane was originally equipped with an 8.50-cert roll cage and a big block Ford engine. More of a show car than a real race car, Hurley wasted no time in taking it to his friend and 2016 NMCA Street Outlaw champion Jacky McCarty’s shop, McCarty Performance, where they cut it all to pieces. Together with the help of Hurley’s longtime crew chief, Dale Minton of Fatboy Fabrication, the men upgraded the cage to a 7.50-cert and completely changed up the engine combination.

“At first, I wanted something simple and easy – a 700 cubic inch big block Ford with nitrous but Jacky [McCarty] said no, I needed to do a Coyote instead,” laughed Hurley who had decided he was going to race at the NMRA/NMCA All-Star Nationals in Atlanta, Georgia, just a few weeks later in April. “We worked 23 hours straight to get the car ready.”

Unfortunately for him, Hurley encountered some issues with his newly-installed Coyote engine at the race and decided to call his friend Eric Dillard at Pro Line Racing for an upgrade. “They did a great job, but back then, no one really made heavy-duty parts and we wound up breaking a rocker arm last year,” Hurley recalled of the hurdles he faced. As PLR had moved more towards their 481X and Hemi programs, Hurley decided to have Kevin Mullins at TKM Performance put together a replacement Coyote instead. “Kevin built us a crazy engine – billet crank, billet cam caps, billet rods, coated pistons, and all sorts of extra stuff done to it,” detailed the driver. “We call the car ‘The Joker’ because of its color and had purple parachutes put on to go with the theme, then had the name engraved in the valve covers.”

Twin “diesel-inspired” turbochargers from Precision bring plenty of boost to the equation, and the FuelTech FT600 engine management system keeps it from partying a little too hard.

Hurley’s 1967 Fairlane was also fitted with a three-speed Turbo 400 transmission from M&M Transmission built to Pro Mod specs. A ladder bar suspension can be found out back but was supplemented with Menscer Motorsports air shocks in the rear. With True Street his true passion, because he loves the “no stress, just have fun” vibe of not chasing championship points, Hurley outfitted the car’s interior true to its street car heritage. The rear seat was upholstered around the roll cage, carpeting has been placed, and even the original door panels are still intact with no sheet metal to be found.

On the dyno, detuned with less boost and less timing than normal, Hurley’s Fairlane produced 1,700-horsepower to the wheels at 5,900 rpm when he typically runs it out to 8,800 rpm with a much more aggressive tune up and much more atmosphere in the engine. He estimates it makes roughly 2,400-horsepower to its Mickey Thompson 275 drag radial tires when the street car is run in its typical race-day configuration. “The car weighs 3,880-pounds with me in it,” Hurley added of his hefty, all-steel (except for the fiberglass hood) vintage Ford’s impressive prowess.

A prior personal best of 7.85 at 177 mph in the quarter-mile was recently eclipsed during a test session in mid-July at North Carolina’s Rockingham Dragway with tuner Chase Driskell at the controls. There, Hurley hauled the mail to a both quicker and faster run of 7.82 at 179 mph. “We’ve still got more in the tank, too,” he shared excitedly of the smothering conditions in which he ran. With temperatures in the mid 90-degree range, a 4,000’ DA, and humidity nearing 70%, Hurley knows that in better weather, Driskell would have had him tuned up to put down a 7.77-second run easily.

“Steve [Petty] had helped us for a long time, but Chase has transitioned in and I really feel safe working with him. Chase knows how I drive and knows the car well,” said Hurley, grateful for all the help he has received over the years from big names in the industry including Minton, McCarty, Mullins, Dillard, Petty, and Luis de Leon. “You can’t have a successful program if you don’t have the right people helping you and I’ve had a bunch of the best over the years.”

Hurley’s hoping to make it to the 2nd Annual Arrington Performance NMRA/NMCA Power Festival Presented by Force Engineering at US 131 Motorsports Park in Martin, Michigan, in just a few weeks so he can show off The Joker’s new performance.