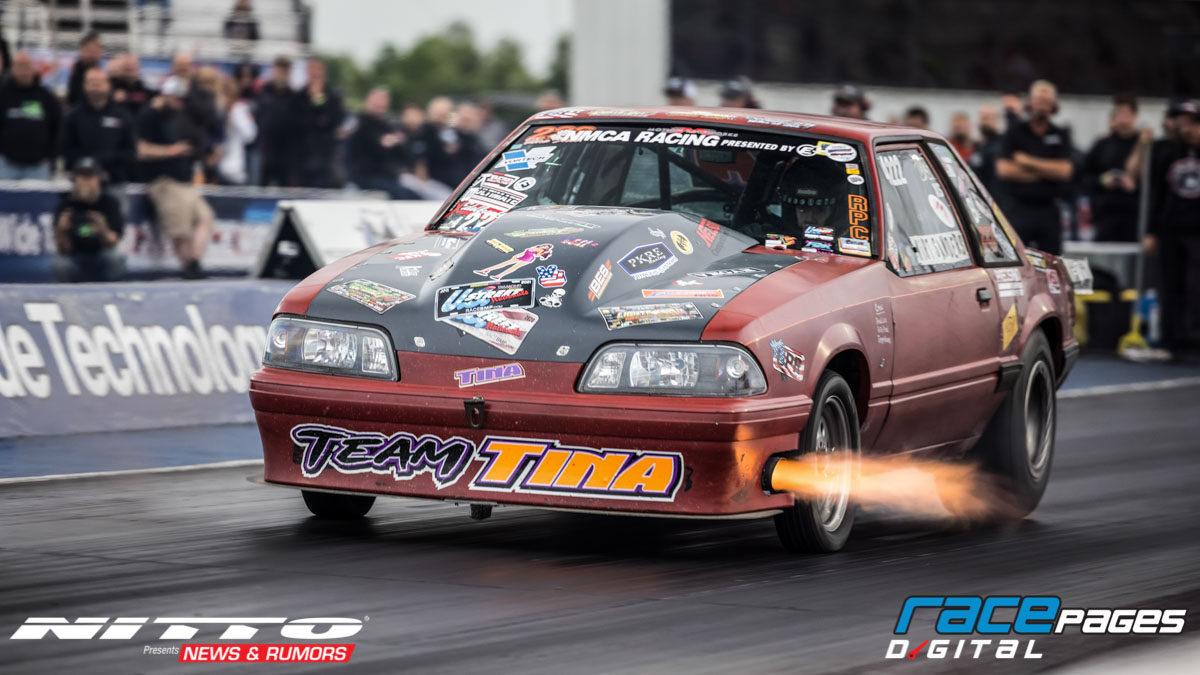 At first glance, Kirt Sanders's pit may seem like a rough, ragged, and aggressive area, but appearances can be deceiving as the owner/driver of the red '93 Ford Mustang known as Tina is actually an extremely easygoing, friendly man on a mission to show the world that it's possible to do more with less while having as much fun as possible. It was Sanders's daughter, Hannah, who spotted the Fox-body Mustang for sale at a fruit stand down the road from Sander's home in Florida in 2015. An index racer herself, she was looking for a new car, but set in motion a cool project for her father instead. It was a running car at the time, so we brought it home and Hannah put the engine and transmission up for sale on Craigslist, recalled Sanders, who was able to sell the powertrain for almost as much as he had spent to purchase the Mustang. Sanders owns a welding and fabrication business, so he stuck the car in a back corner of his shop and got to work building it up. Another local shop, R&R Fabrications, helped Sanders bend the tubing he needed to put together his own roll cage. At first, we had a small-block Ford deal in it and my daughter raced it for two years, but we weren't very successful with it. Then she got married and had a baby, so no more racing, he explained of Tina's early days in Ultra Street trim. In 2018, when the Ultra Street rules were updated, Sanders saw an advantage in going with a big-block Chevy combination instead. He had successfully co-campaigned the General Lee Ultra Street Mustang with his longtime friend and owner of Innovative Racecraft, Troy Pirez Jr., for several years prior, so they continued their collaboration with Tina. Troy took his engine and put it in this car, and we were successful right out of the gate, Sanders continued. Despite having owned several cars over the years, Sanders had never gotten behind the wheel. That all changed with Tina, as he had always wanted to run with the NMCA and made the trip to Memphis, Tennessee, for the Inaugural Comp Cams NMCA Memphis Homecoming in May of 2019. Running in NMCA Edelbrock Xtreme Street, Sanders qualified tenth on a 4.906 at 147.63mph pass. He went out in the first elimination round to Tim Knieriem, but he was hooked on the seriesand on driving. It was my first time in a car that weekend, and I was scared to death because it was so fast, laughed the then-rookie racer. I was too new in the seat to do well, but I met Brad Cox and he helped me out, and he's been my crew chief ever since. 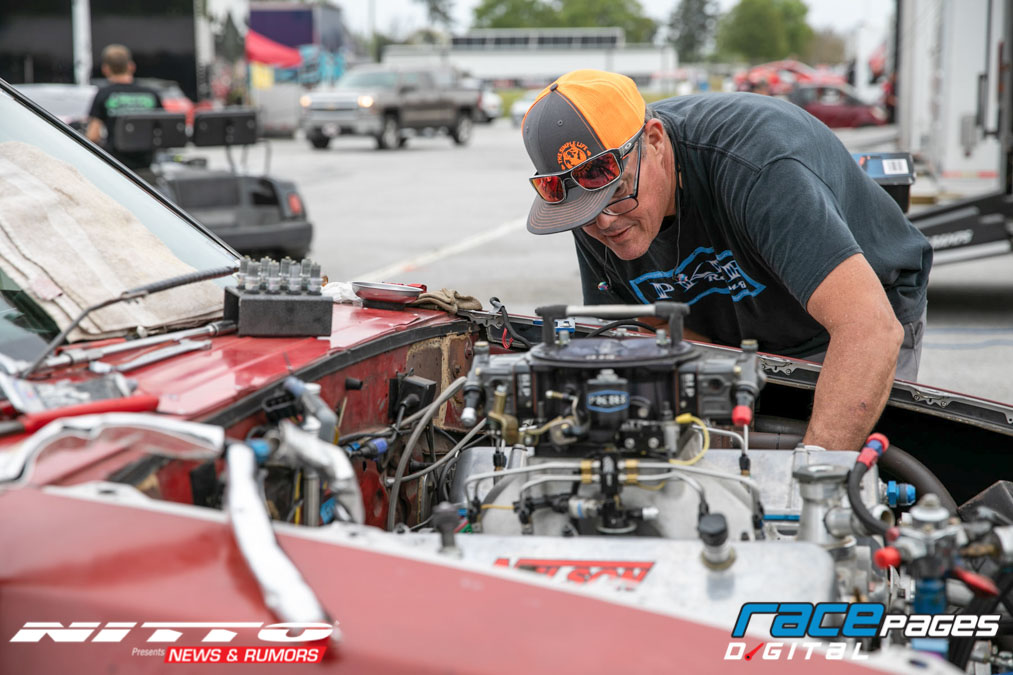 In 2021, Sanders started off his season with a textbook-perfect performance at the 19th Annual Whipple Superchargers NMCA Muscle Car Mayhem at his home track of Bradenton Motorsports Park. There, Sanders set the pace, and both ends of the class record, when he ran 4.542 at 155.82 mph during qualifying. He went on to win the race itself against the 2020 Xtreme Street and Ultra Street champion, Brian Keep, with a blistering 4.559 at 156.05mph blast in the finals. We really just focused on consistency. With the big-block Chevy, we mostly leave it alone and follow the weather for the tune-up, recalled the driver. I demanded John Sears tear me down so nobody could cry about how well it went, and we were able to get as many points as we possibly could. It was a grand weekend for sure. His next two outings left little to be desired, as Sanders had to sit out the winner's circle celebrations in both Atlanta and St. Louis. I qualified well in a big field, but messed up the shock settings, he explained of what went down at World Wide Technology Raceway when he missed the mark with his AFCOs. We're planning to make the rest of the races for the year to get the bonus points, though. I'm digging hard for the championship. With such a lofty goal, Sanders knows he'll have to lean on his engine a bit more than usualespecially when the competition within the field is so tight. Although he hopes not to have to use it, Sanders is prepared by having a spare 588ci bullet built that will stay in his trailer in case of emergency. He purchased components, including a Dart block and Brodix Head Hunter cylinder heads, from BES Racing Engines and had Nelson Competition assemble it for him. Nitrous oxide is Sanders's preferred power adder, and he's installed a direct-port system, not a plate, from Paul Klyczek at PKRE Racing. Sanders also loves supporting local businesses, so he chose a Powerglide from Larry Hart Transmissions and never has to worry with what a solid unit it has proven to be. As he loves to tinker and fabricate. He's also built some of his own converter parts, including stators, to use with the equipment he originally gets from Greg Slack. 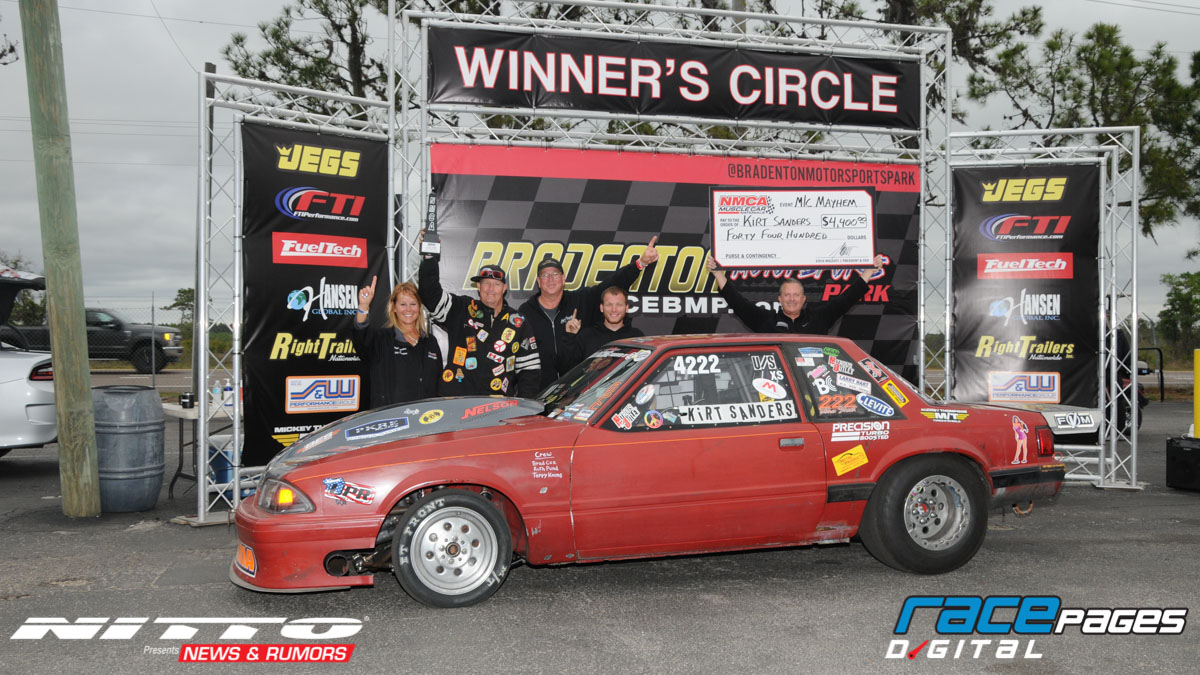 Over the years, Sanders has gained experienceand notorietyfrom having one of the most visually interesting cars on the property. A unique blend of punk rock attitude and goal-oriented action, Sanders loves being able to race on his own terms. Instead of spending money to polish up ol' Tina's appearance, he chooses to carefully use his cash to produce performance results and comes up with creative solutions where others may be tempted to simply spend instead. I figure, eventually the car will get wrecked or dented and we would have to fix it, so I just choose to keep it as it is, he laughed, knowing that looks are irrelevant to elapsed times and that Tina will run what she'll run despite her aesthetics. We purposely do this on a tight budget just to show that you can be competitive without a lot. Nobody gives me anything. Racing by his own rules and living life that way, too, Sanders is certainly not risk-averse and enjoys new experiences as much as possible. I might even be more proud of my '01 F-250 truck that I bought new and my ratty old Featherlite trailer that I only paid $3,500 for than I am of Tina, continued the man who loves setting out for unknown adventures with his girlfriend, Ruth. Ruth finds Airbnbs for us to stay at for every race, and we always try to eat at local mom-and-pop restaurants. Every race is a vacation, and every day feels like a Saturday. Whether it's his racing program or his outlook on life in general, Sanders has certainly accomplished his goal of creating a life that he can be grateful for, and is busy showing the world that it's possible to have fun without conforming or compromising core values.
AFCO Racing