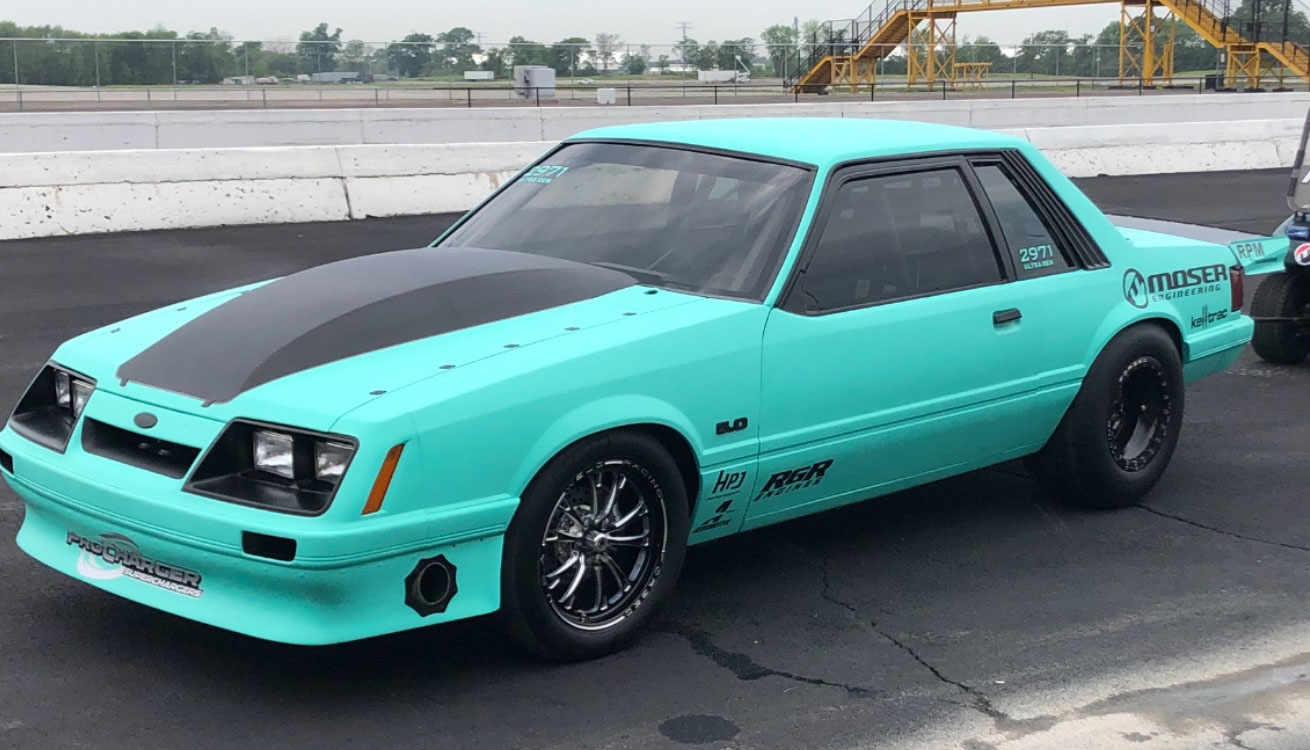 A longtime veteran of NMRA competition in classes ranging from Roush Super Stang to JDM Engineering Limited Street, Chad Wendel will be stepping up to NMRA VP Racing Madditives Renegade and Ultra Street for the remainder of his 2022 season and beyond with a new-to-him 1986 Ford Mustang.

Wendel acquired the notchback in late 2021 from his friend, Jay Nelson, who had been planning to scrap the car after using it as a testbed for some new tube bending computer software. Just a roof, quarters, and firewall at the time, Wendel suggested they finish it out and go racing instead.

“It sat in a barn forever in a million pieces and went through four different people, but it never got put together,” shared the racer who gave the old Fox body a new lease on life in November. “It had never even been down the track.”

By May of 2022, Wendel and Nelson – who also fabricated the cage in Wendel’s ProCharger-supercharged and Rich Groh Racing Coyote-powered Limited Street 2007 Ford Mustang GT – had the car ready to haul to the 17th Annual NMRA/NMCA Super Bowl of Street-Legal Drag Racing Presented by FuelLab near St. Louis to hand over to Keith Ciborowski for wiring and finishing.

While at the race, even though the notchback was still basically a roller, Wendel was able to get the 25.3 SFI cage certification checked off his to do list.

During the build and to prepare for Renegade and Ultra Street duty, though, Wendel also put together a competitive engine package comprised of a Gen 1 Coyote from RGR, once again with a ProCharger, and a three-speed Turbo 400 from RPM Transmission with a PTC torque converter.

“The rear has a full Moser fab 9-inch,” noted Wendel of his continued partnership with the company. “We’ve also got KellTrac custom Viking shocks and struts, along with a full front suspension from Racecraft including a tubular K-member, A-arms, plates, and more.”

Wendel and Nelson handmade many of the other components used on the Fox body so that it could be crafted to their exact specs. Motion Raceworks supplied some of the odds and ends, such as the steering column, and Wendel admits the project came together so quickly that “it was a blur” most of the time.

During the process, Wendel took the time to wrap the primered metal in a brilliant hue to pay homage to one of his former rides. “Years ago, I had an identical ’86 in seafoam green and decided to make this look like the old one,” he explained of the eye-catching color choice.

Once Ciborowski wraps up the install of the Holley Dominator EFI system – which he will also be tuning – Wendel will take his 1986 Mustang back for an alignment and final check before strapping it to the dyno at HPJ Performance for the initial break-in procedure.

He plans to make the 2nd Annual NMRA Ford Performance Nationals at Summit Motorsports Park in Norwalk, Ohio, his debut race with the notchback. After that, Wendel will hit some of the combo NMRA/NMCA events as well as standalone Ultra Street races, while his son and longtime racing partner, Shelby Wendel, has purchased his previous 2007 model to campaign in a yet to-be-determined class.