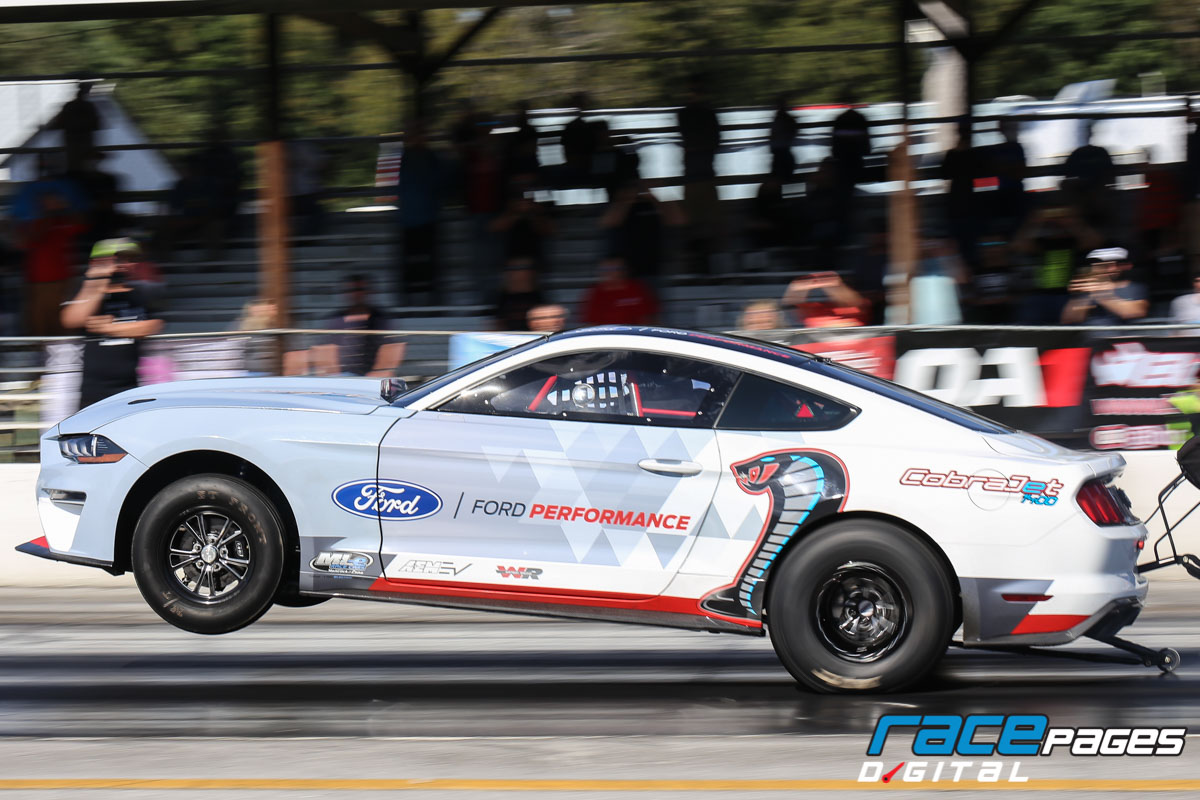 Ford Performance brought its Cobra Jet 1400 prototype to the 22nd Annual NMRA All-Ford World Finals & Holley Intergalactic Ford Festival at Beech Bend Raceway in Bowling Green, Kentucky, and we took a closer look. Written By Steve Turner Photography by the Race Pages Digital staff and courtesy of Ford Performance It is eerily quiet in the burnout box and suddenly the Mickey Thompson rear slicks go up in smoke as the sound of gears whir. Then it is quiet again. Staging lights glow, the tree ignites, and the familiar form of a modern Mustang pulls the front wheels and thrusts down the Beech Bend Raceway 1,320. Along the way the gears howl even louder, but the familiar sound of exhaust is missing. 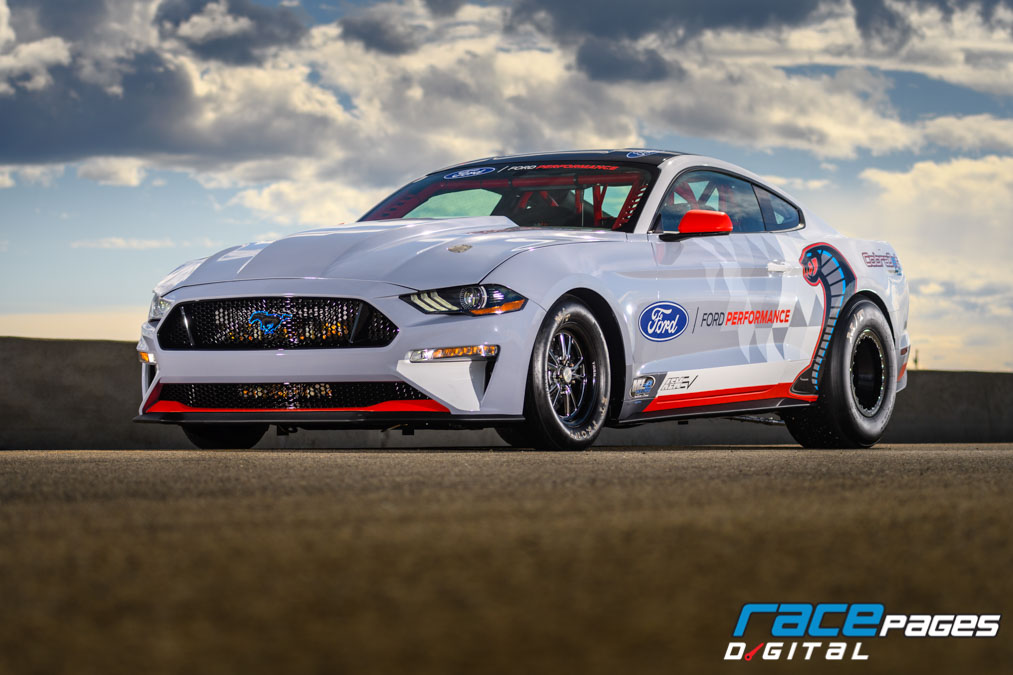 Looking the part of a modern Cobra Jet, this prototype began with the same chassis, transmission, and rearend as its gas-burning cousin. Ford Performance partnered with MLe Racecars on the build and tuning, while Watson Racing built the roll cage and provided chassis expertise. This is not just another Mustang, but a glimpse into the future of transportation, and racing. While many of us will cling to internal combustion until our dying days, the world is rocketing toward battery-electric vehicles and Ford Performance's Cobra Jet 1400 prototype is a harbinger of what these machines are capable of doing in a high-performance environment. Electrification is obviously huge for Ford, as we have invested $11.5 billion for the future here in electrification programs. So that also means it's important to us in motorsports. So we've been looking at the, a lay of the land and what series are out there for us to compete in. And at least at the time, there wasn't anything that we as a company decided we'd go do, Ford Performance Motorsports Supervisor Brian Novak explained. So we decided to do a couple of demonstrators, which is where those twothe Cobra Jet 1400 and the Mach-E 1400came out of. So, very close to the same timeline, we made the decision to do both those cars. 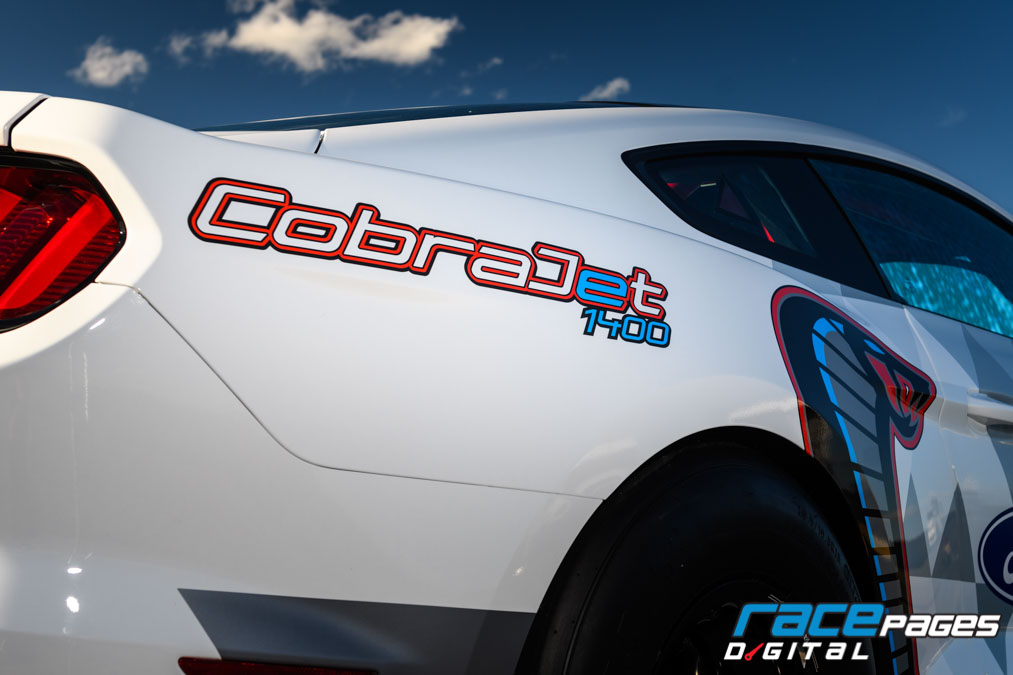 With more than 1,500 electric ponies and over 1,000 lb-ft of torque on tap, the Cobra Jet 1400 required a more robust cage, unique damper tuning, and gearing suited for its powerband. While the two projects came together in parallel, they don't share any of the technology. Not only did this methodology allow Ford Performance to try out different gear, but it was also a product of working with the current Mustang platform. The platform does dictate it. As far as the Mustang Mach-E and the base Mustang, one is designed to have a big battery and the other one isn't, so that kind of pushes you to one way or another... Novak said of the engineering challenges. They use different types of motorsaxial or radial fluxdifferent types of batteries, different types of cells, different types of control mechanisms. So there's nothing shared between the two cars in reality... 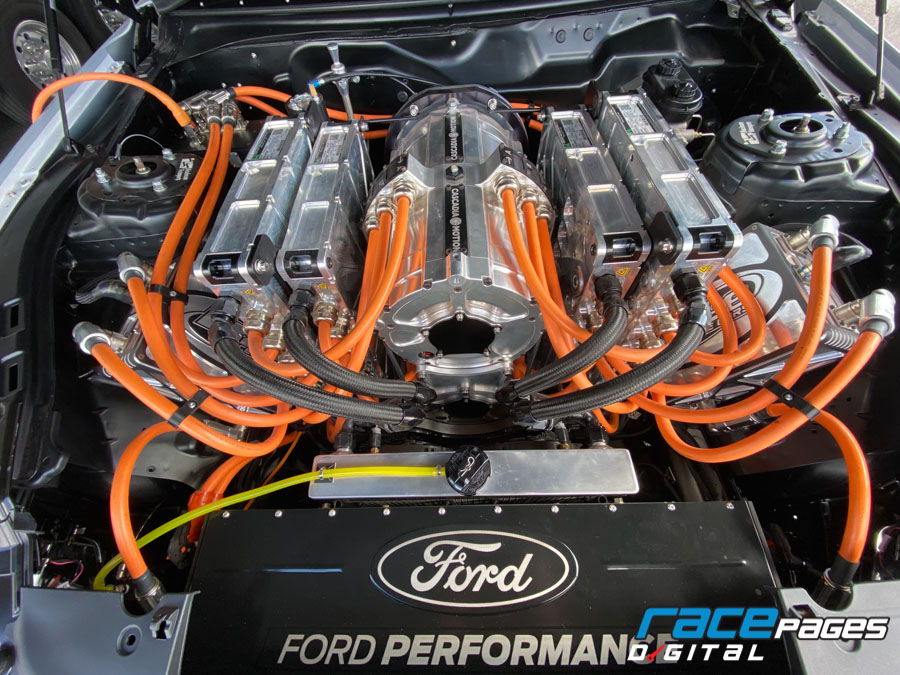 Rather than a supercharged 5.2-liter V8 under its hood, the Cobra Jet 1400 is propelled four motors and four inverters from Cascadia Motion. These motors spin up to 10,000 rpm while running at 800 volts and up to 700 amps. For the electric Cobra Jet, Ford Performance turned to Cascadia Motion to power the Cobra Jet 1400 with four PN-250-DZR inverters coupled to a pair of DS-250-115 dual-stack motors that features internal sumps and mechanical oil pumps. Designed for high-power demand applications, these motors spin to a dizzying 10,000 rpm in the Cobra Jet 1400 thanks to 800 volts and up to 700 amps from the high-power propulsion inverters. 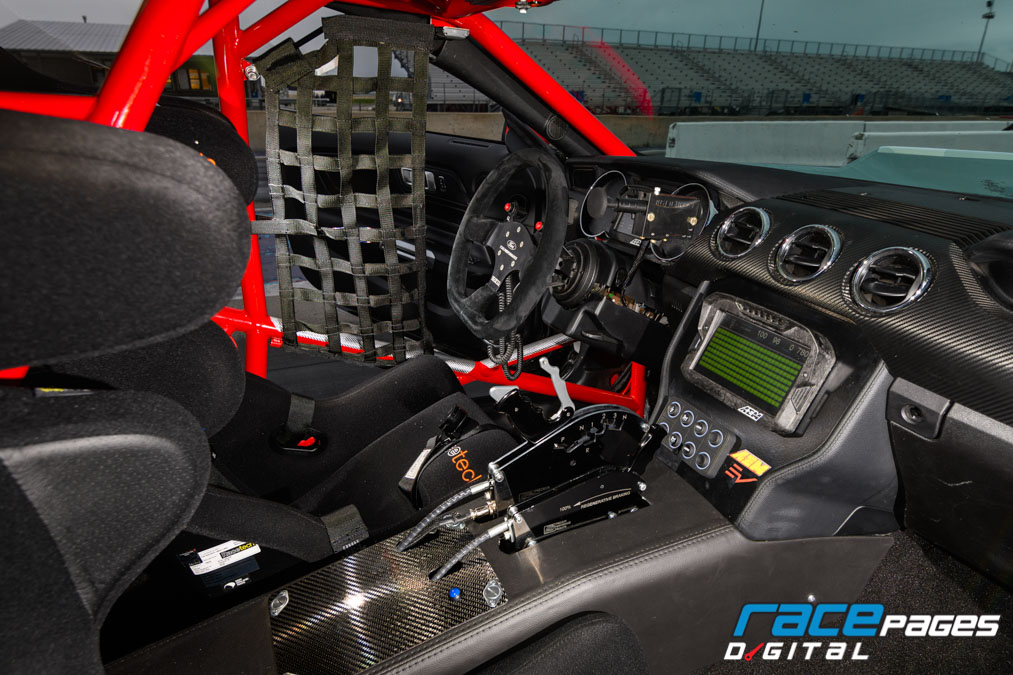 Though its interior is familiar, the AEM EV dash is a hint that something is different about this drag car. If you look closely at the shifter you'll see that this EV benefits from regenerative braking (using brake energy to charge the batteries) like its street-going cousins. It is worth noting that the car has a passenger seat to eventually allow for shotgun rides (Sign us up!). While the motors and inverters packaged nicely under the hood of an S550 Mustang, the real trick was mounting batteries in a vehicle not designed for that much electrical storage. As such, there are cells mounted under the hood, in the passenger compartment and most of the CJ 1400's trunk. 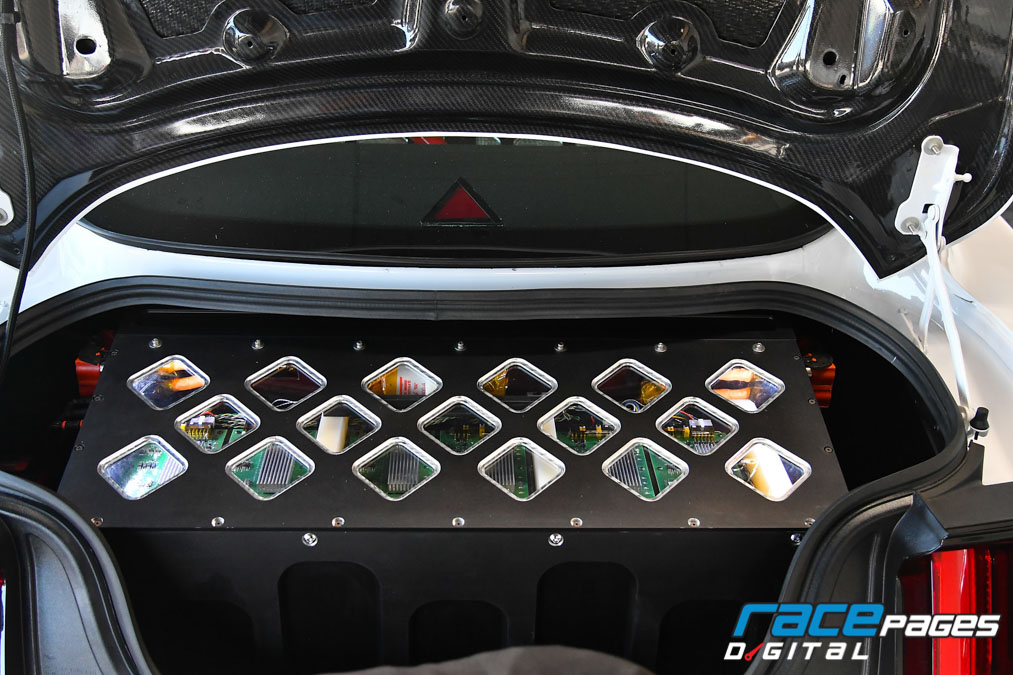 Since the S550 platform was not designed from scratch as an EV, Ford Performance engineers put the cells in the engine compartment, interior, and trunk. Not only was space at a premium, but spreading the batteries out allowed for dialing it more advantageous traction. With a race car you can get away with anything at that point, so it lets us fill all the interior space with battery. Obviously to be able to do consistent runs in the low eights, like this car can, it takes a lot of battery to do that. So it lets you fill out that cabin space, but that's one of the advantages of just in general, of the modern-day electric cars that been developed like the Mach-E. You're able to design it around the battery, which you end up with that, that really low center of gravity and the entire battery down under the floor of the car, Novak said of the two platforms. ¦A Mustang just wasn't designed to take that much battery. 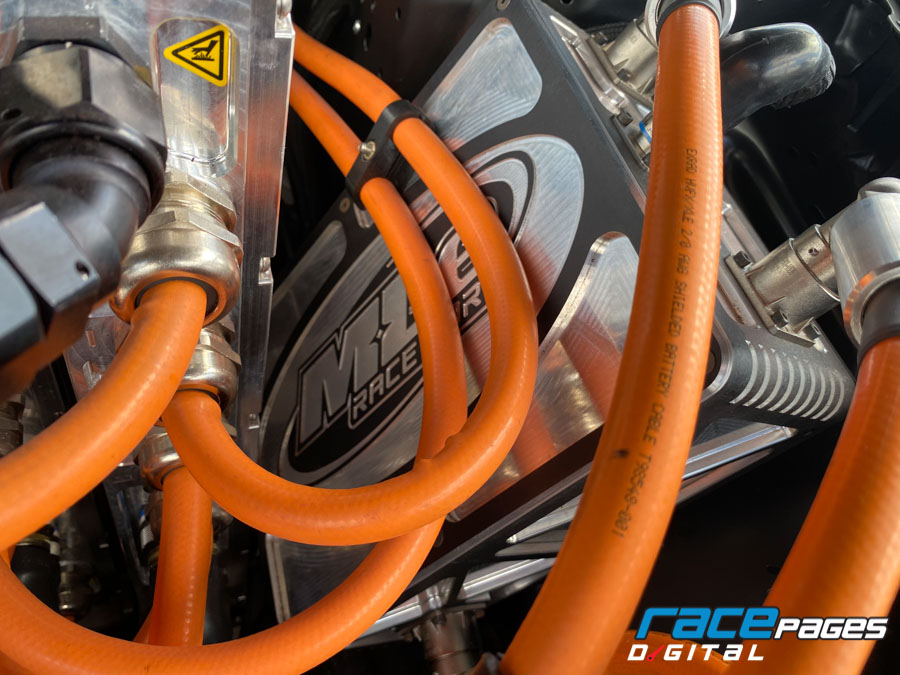 A special cooling system keeps them system operating at an optimal temperature for brief stints on the track. If you hot-lapped the car a few times the performance would start to degrade, but for most typical drag racing situations the car system output is consistent. 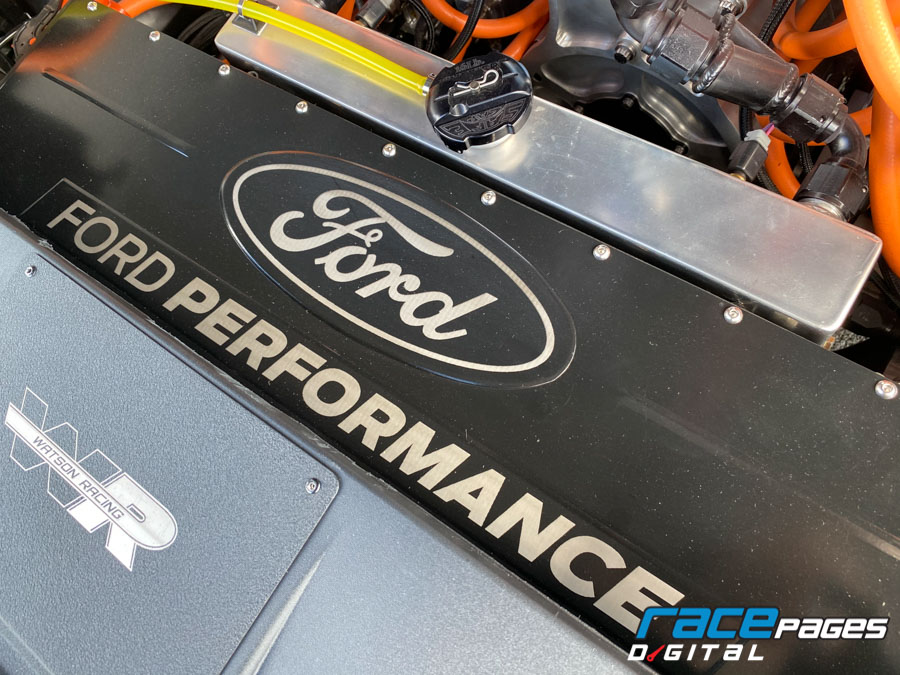 Despite having to accommodate a lot of batteries, the Cobra Jet 1400 doesn't stray too far from the setup of its internal-combustion cousins. In fact, it employs the same Turbo 400 automatic transmission and 9-inch rearend used in gas-burning Cobra Jets. While the torque converter specs and gearing are optimized for the electric powerband, the hardware is strikingly similar. It very much is a gas Cobra Jet. We actually started from one of our old test cars, but everything's beefed up a little bit. The car does weigh more than a base Cobra Jet, he said. Obviously, we're putting down a lot more power, we've got 1,500 horsepower at the rear wheels. Everything's beefed-up a little bit for the, for what it is, but it still uses the same transmission, and still uses the same rearend¦ 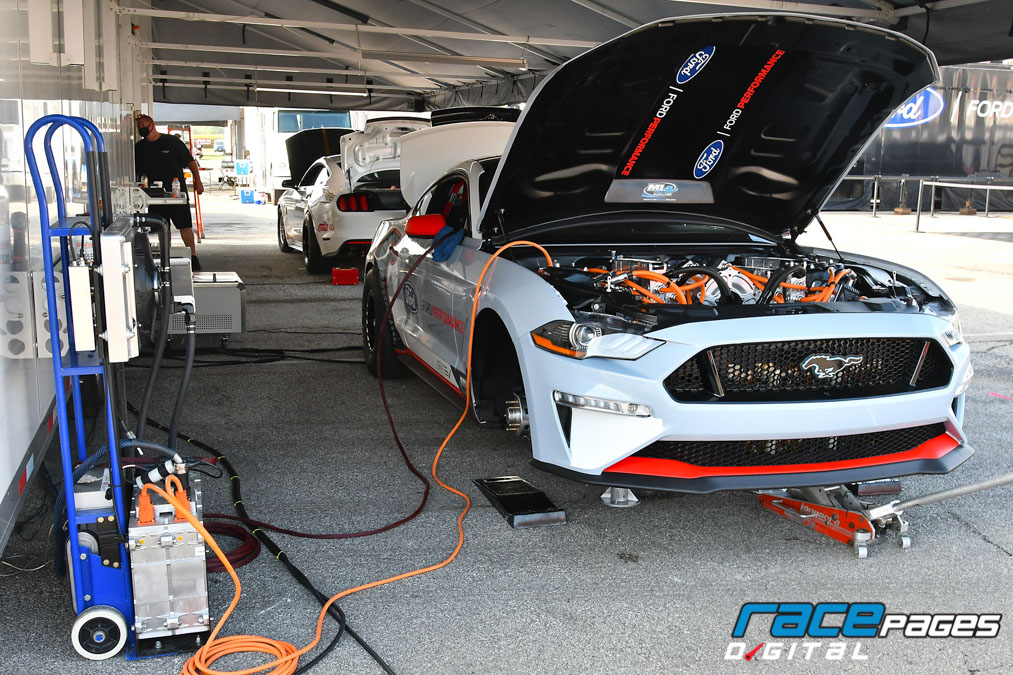 To ensure the electrical system is ready to perform at its highest level engineers hook up the cooling system to this external cooler. While engineers wouldn't share what the optimal operating temperature is for the Cobra Jet 1400, this setup is ready to achieve it between rounds. 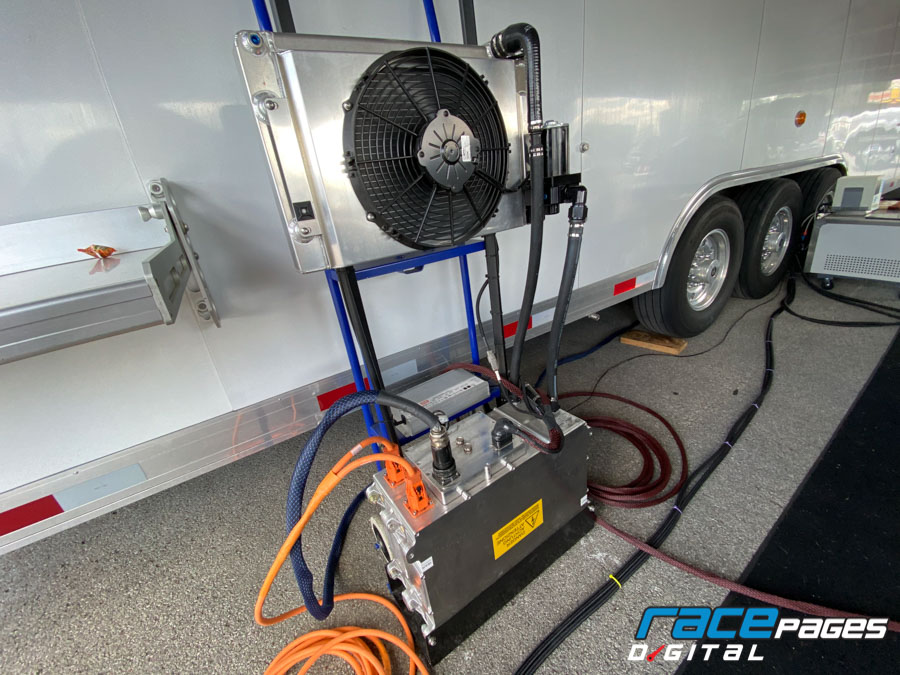 While Brian played the gearing and torque converter specs close to the vest, it is pretty interesting how they combined the output of those electric motors and mated them with a traditional transmission. Not only is it effective, but this arrangement is also the source of that high-tech whirring heard when the car is getting down to business on the drag strip. In the transmission, we set the gear ratios where we want based on the rpm of the motors, but probably one of the more complicated things is getting all the motors hooked up to that transmission. We've got four electric motors on the Cobra Jet 1400. They're all put together with a summing gearbox, Novak said. So when you, when you see the car, you'll see there's two motors on the top, and there's two motors down below. Behind those two sets of motors is a summing gearbox. That is just a 1:1 ratio. And all that does is convert them a single output shaft at the bottom that goes right into the transmission. That bolts up to the bellhousing, and then there you go. 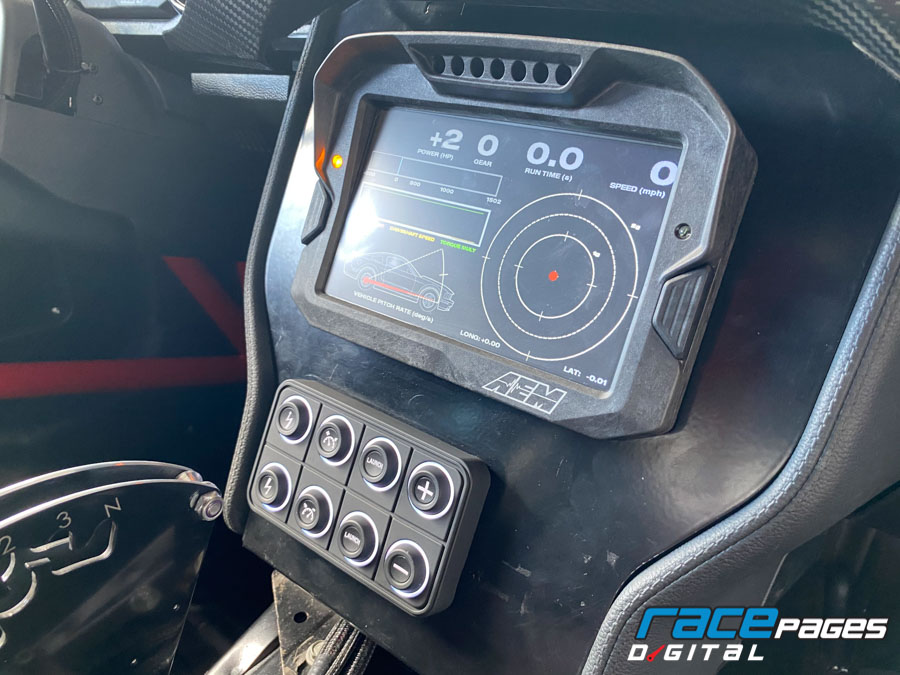 AEM made the jump into electric vehicle controllers with its AEM EV line, and Ford Performance partnered with the company to develop custom software for the Cobra Jet 1400. It does employ AEM EV's readily available VCU 300 and digital dash.

Corralling the instant torque hit of multiple high-output electric motors presents a different chassis- and suspension-tuning challenge than even a supercharged Coyote. Per NHRA rules, to run at the speed we're running, we've got a little more upgraded cage in it, Novak explained. The damping is different, the springs are different, the rearend gear is different, and all the internals of the transmission are different, even though it's the same transmission. Everything's optimized for this car. 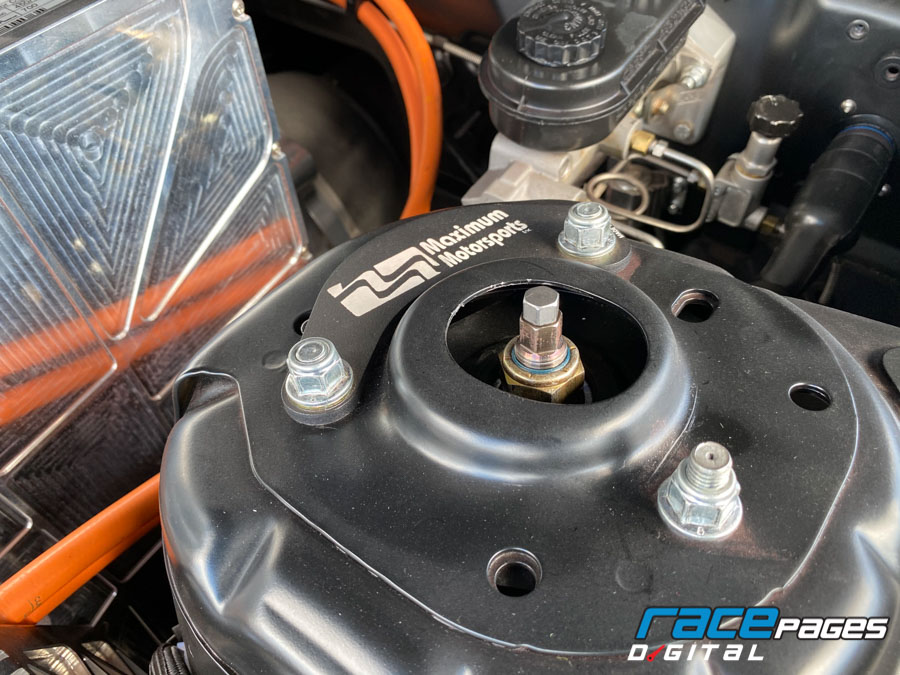 Drag cars need proper caster and camber settings, and the Cobra Jet 1400 benefits from the popular Maximum Motorsports caster/camber plate to get the job done. Certainly, the mechanical bits are key to the car's performance, but making the whole package excel is an electronic controller from a familiar aftermarket player. Known for its electronic fuel injection products, AEM branched out into control systems for high-performance electric vehicles. So we have AEM EV hardware controlling the car, and we've written custom software with them. So we've been real lucky to work with them on that and be able to get what we have, which is a very tunable electric car, Novak explained. We see some of these reallyespecially some of the motorsports ones, the really high-performance onesseem a little hard to launch and hard to do things. I think we've got something that we've been able to work out¦ 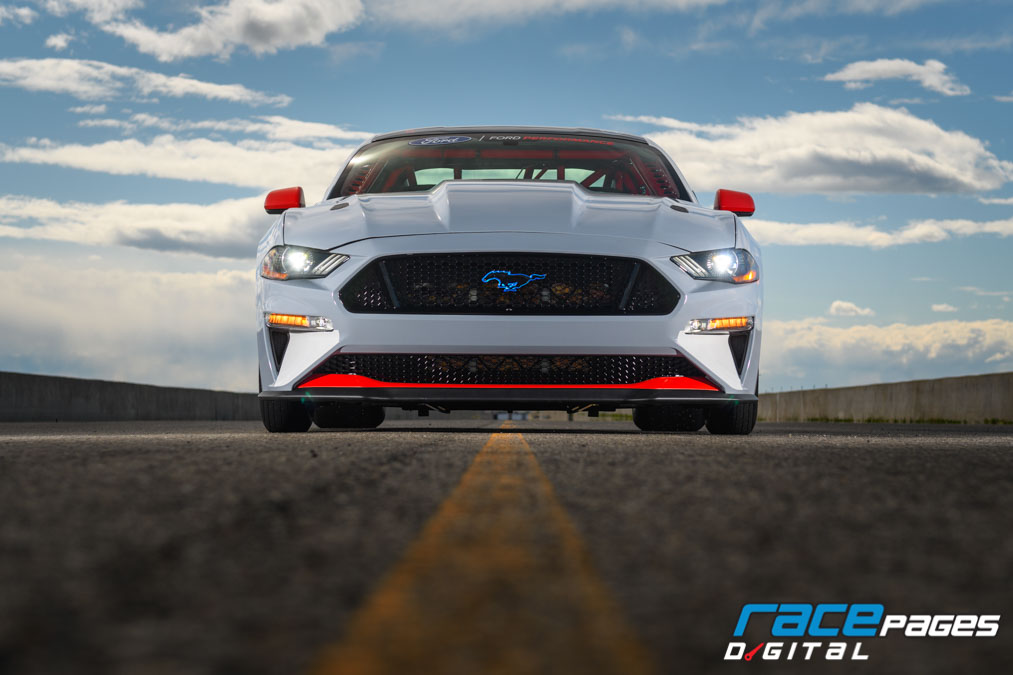 Looking the part of a modern Cobra Jet, this prototype began with the same chassis, transmission, and rearend as its gas-burning cousin. Ford Performance partnered with MLe Racecars on the build and tuning, while Watson Racing built the roll cage and provided chassis expertise. The resulting control system is reportedly user-friendly and operates in a way that is familiar for EFI tuners. It allows Ford engineers to calibrate the Cobra Jet 1400 and log the results for future consideration. The team jokes that they ˜change the timing' all the time, but it is similar in that way¦ Novak said. AEM's system offers a wide variety of vehicle controls ranging from driver inputs and accessory controls to closed-loop motor speed regulation and dynamic torque limiting. It can even sequence the start-up and shutdown sequences of the high-voltage gear like the inverters. Using this control offered by this custom system, Ford Performance engineers brought the Cobra Jet 1400 out to a pair of NHRA events in 2020 before showing it off to the Ford faithful at the 22nd Annual NMRA All-Ford World Finals & Holley Intergalactic Ford Festival at Beech Bend Raceway in Bowling Green, Kentucky, last October. That was our first opportunity to see in making real-world hits down the drag strip and it put on a show. The Cobra Jet 1400 had run as quick as 8.27 at 168 mph during Ford Performance's private test sessions. It definitely proved those numbers were legit by clicking off an 8.308 at 167.93 mph in Bowling Green. It wouldn't be surprising to see it run even quicker in 2021. Since revealing the car, we've continued to fine-tune it and now know we're just scratching the surface of what we may be able to achieve with this much electric horsepower in a drag racing setting, Mark Rushbrook, global director, Ford Performance Motorsports, said. Sources AEM EV (310) 484-2322 Aemev.com   Cascadia Motion (503) 344-5085 Cascadiamotion.com   Ford Performance Performance.ford.com   Watson Racing (734) 759-0555 watsoneng.com