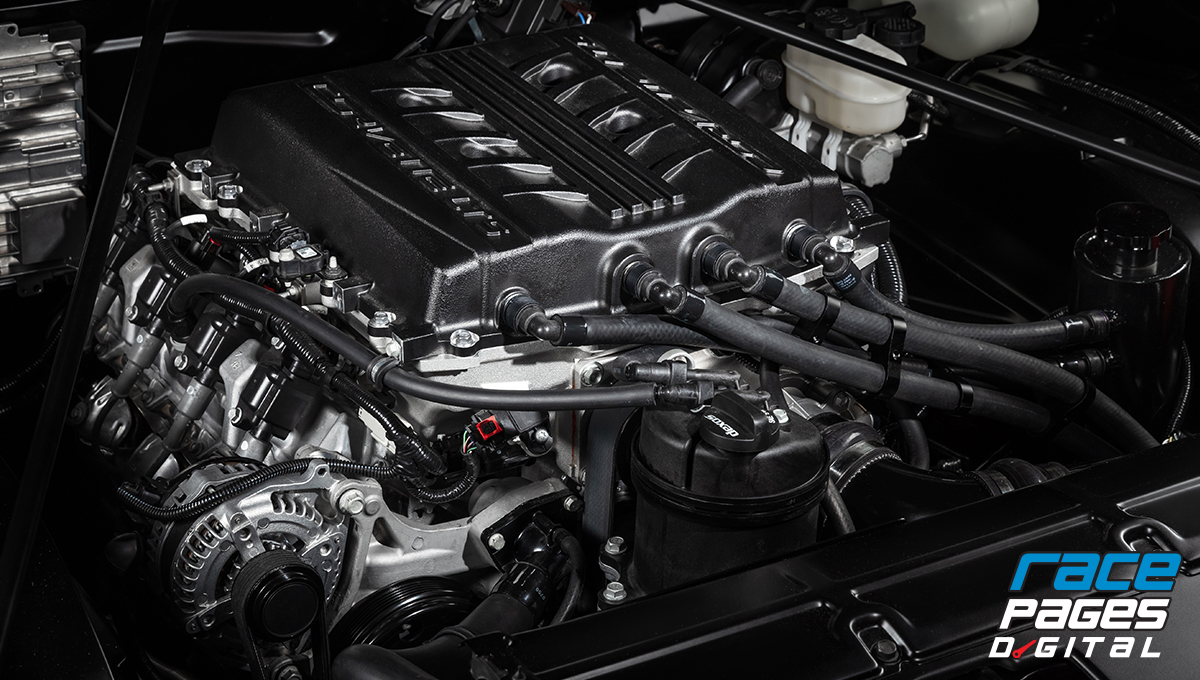 Written By Paul Huizenga Photography by the FSC Staff and Courtesy of the Manufacturers Prompted by ever-more-stringent emission and fuel economy regulations, car manufacturers are switching to gasoline direct injection power plants in everything from four-cylinder econobox transportation appliances to the crossover vehicles that are the minivans of the new millenium, and even in their performance flagships like the Ford Mustang and Chevrolets Camaro and Corvette. Predictably, this has been greeted as dire news by some enthusiasts, who see it as an insurmountable obstacle to performance modification. Direct injection will be the death of hot rodding a factory engine, they claim; too expensive to upgrade, too hard to tune, too restrictive compared to what theyre used to working with. If that sounds like a familiar fear, youre probably old enough to remember the switch from factory carbureted engines to electronic fuel injection at the tail end of the 1980s, which was also more or less forced upon Detroit by emissions and fuel economy standards that carburetors couldnt possibly meet. As it turned out, the switch to factory EFI was one of the best things that ever happened to OEM performance, giving us a 30 year run of cars that were more powerful, more reliable, and easier to modify than anything you could previously buy off the showroom floor. While DI does undoubtedly bring new challenges, it also offers new opportunities as well, and weve gathered a few well-known builders and tuners with experience making big horsepower with direct injection engine platforms in order to throw some light into the shadows cast by the fear of this change in technology.

First, lets briefly look at what direct injection is, and how its being implemented by the two biggest players in domestic V8 performance, Ford and GM. In a conventional electronic fuel injection system, injectors working at relatively low pressure (typically 60 or so pounds per square inch) introduce fuel into the intake tract just before the intake valve. A gasoline direct injection system moves the injector location to the cylinder head, where it delivers fuel directly to the combustion chamber at very high pressure; 3,000 PSI, or thereabouts. That high pressure is a necessity for a DI system, because the injectors have to work against the dynamic pressure of a cylinder thats under compression instead of just spraying a mist into the passing breeze like port injection. The payoff for the additional complexity of requiring a high pressure pump and injectors is manifold; Because the fuel can be delivered in a shorter amount of time and is more precisely atomized, through clever tuning the engine can tolerate higher compression without needing higher octane fuel, and deliver more power than a similar port injection design while still having lower tailpipe emissions and better fuel economy. I think the biggest misconception people have is that it doesnt help make more efficient power and that it is only for emissions, says Jon Lund Jr., proprietor of Lund Racing. While both Ford and GM have implemented direct injection on their newest performance V-8 engines, theyve taken different paths. For the 2018-up Coyote, Ford came straight out of the gate with a fuel system that uses both direct and port injection, while GM relies on a DI-only strategy for the naturally-aspirated Gen V LT1 and supercharged LT4, only adding supplemental port injection on the top-of-the-line 755-horsepower LT5. The big news on the 2018 Coyote was, of course, that on top of direct injection, you had factory port injection as well, explains renowned Mustang guru Ken Bjonnes of Palm Beach Dyno. It starts off when its cold, 100 percent on the DI, likely for emissions reasons. It then blends between the DI and port injection depending on load once the engine is warmed up, and its going to try to run more off the DI in the mid range and more off the port injection down low. Obviously we change all that once we start to modify things, and it gets pretty extreme once you get into the thousand horsepower range. The OEM tuning strategy has a Port Injection and Direct Injection blend logic, Lund elaborates. This is something relatively new for the Ford DI platforms as they did not have both PI and DI in previously year models on the Ecoboost platforms. There is a blend table based on calculated engine load vs RPM that has a blend percentage between PI and DI. At WOT on the 2018 GT, the blend is 90% DI and 10% PI. On the GM side, things are a little more challenging, because unless you have the deep pockets to afford a factory LT5 engine, you are faced with the choice of running pure DI or adding a supplemental aftermarket port injection setup. Like any fuel injection system, the capacity of the injectors and fuel pump set the ultimate limit for horsepower; there are some shops that have made 1,000-plus on a DI-only LT, but according to Doug Cook of Motion Raceworks, I dont think its a very safe way to run when you push it that hard. I see people breaking pistons, breaking heads, all kinds of crazy stuff. And you know that piston technology didnt go backwards; everything on these engines is way better, but theyre doing things like dropping valve seats out, things that are really indicating detonation. The chamber just gets too hot, and there is no cooling on the back of the intake valve so it gets really hot. Now, I will probably get proven wrong here in a year or two, but I dont think you are going to see a lot of those combos live very long with direct injection only. They can absolutely deliver enough fuel - I just dont think its a reliable way to make that power.

Been There, Done That

Cook knows a thing or two about the GM Gen V platform; Motion Raceworks can lay claim to the first Gen V LT in the sevens with their 1972 Nova test mule. The Nova is a 388 cubic inch stock LT4 block with CID as-cast heads and twin 6766 Precision turbos, he explains. It has a stock crank, Carrillo billet I-beam rods and CP pistons. We built that car to find the limits of things, because nobody was really pushing that engine platform too hard. We built that last year, and took a car with a chassis that was already working well and put that engine in it. While the Nova relies on a supplemental port injection EFI setup, it still retains a factory-style computer and other DI hardware as well. The strategy we used on the Nova is that if you know going in that you are putting on port injection, theres no reason to push the DI super-hard. Youre not really proving anything, Cook asserts. We used all LT4 (fuel system) stuff because I dont really trust the aftermarket parts. The tolerances have to be so precise. And we only ran it to about 80-percent capacity, because like I said, I dont really see the point of pushing the DI too hard because we have the capacity with the port injection to do whatever we need to do. While the 2018-up Coyote offers both DI and PI straight from the factory, Bjonnes cautions that it will need some attention if youre in search of big horsepower. Ford made it a lot easier on us than the GM guys because we can lean on the factory port injection, he says, adding, What the entire stock system can provide depends on the lift pump, plus the port injector is really small. So what we have done so far is all port injection upgrades. Our cars all run the stock DI injectors and high pressure pump, and we upgrade to a multi-pump setup in the tank and supply the extra fuel for the upgraded port injectors that way. Now that we have a handle on that, my next step will be to upgrade the high pressure pump from Xtreme-DI on one of these cars so we can run more DI than we have been.

Adding forced induction to a DI engine will pose different fueling and tuning challenges, depending on whether youre looking at Ford or GM, and how hard you intend to push things. For Bowtie builds, as Cook mentioned there is already a factory-engineered pure DI solution in the form of injectors and high-pressure pumps designed for the LT4. Rated to deliver warranty-proof levels of reliability at 9.4 pounds of boost and 650 horsepower, an LT4 setup has a bit more in reserve, but for the LT5s 14 PSI and 755 horses, GM added supplemental port injection, so tread carefully when pushing past factory power and boost levels without it. While adding a port injection system to a Gen V LT does increase complexity and cost, it has other benefits that are well-suited to a track car thats daily-driven, too. Cook explains, One of the really cool things we can do is use a bolt-in fuel cell for the port injection, then fill it with C16 and run pump gas in the regular tank. Thats great for a guy who is going to the track on weekends - when he gets to the track he can turn on the second pump and let ˜er eat. For the Coyote, Lund cautions, So far Ive seen the stock fuel system down to OEM PI injectors start to struggle around 6-7 pounds of boost at 7,200 RPM. That can dictate different horsepower levels based on power adder and ignition timing, but on pump gas with a supercharger thats around 600 rear wheel horsepower. A turbo setup would make a bit more depending on efficiency. His recipe for a high-horsepower foundation is the product of extensive research and development. Lund states, The fuel system upgrades mostly depend on fuel type. Non-ethanol obviously doesnt require as much volume, so we can get away with running 1000cc injectors on the PI side for overhead and a fuel pump voltage booster on the lift pump. Ive not really pushed that setup hard on non-ethanol fuel, but Ive seen 800 rwhp with VP MS109 and the lift pump pressure still had some head room. Switching to an ethanol blend does a lot of good things for a forced induction engine in terms of charge cooling and added octane, but its lower energy content compared to gas puts a lot more stress on the fuel delivery components. That same setup on E85 has issues keeping up via the lift pump, Lund explains. With a 22V booster on the lift pump we were seeing fuel pressure drop to 30 PSI, and that really starts to negatively affect the pressure going to the high pressure fuel pump. I dont really like seeing the pressure drop that low feeding the big pump. We saw HP rail pressure drop off when that happened, and we ran into issues around 800 RWHP. We added a Deatschwerks 400 LPH pump with the 22V booster, and the fuel pressure holds better, but its not the best solution, he admits. Long term, we like to see a return-style fuel system used that has stronger pump volume and uses dual regulators to maintain a constant pressure on the DI pump and a variable pressure on the PI injectors. This is what is being used in the 1000+ RWHP twin turbo 2018 youve seen us tuning that was the first to the 8 second ET barrier. We modify the blend in the calibration to depend less on the DI and more on PI.