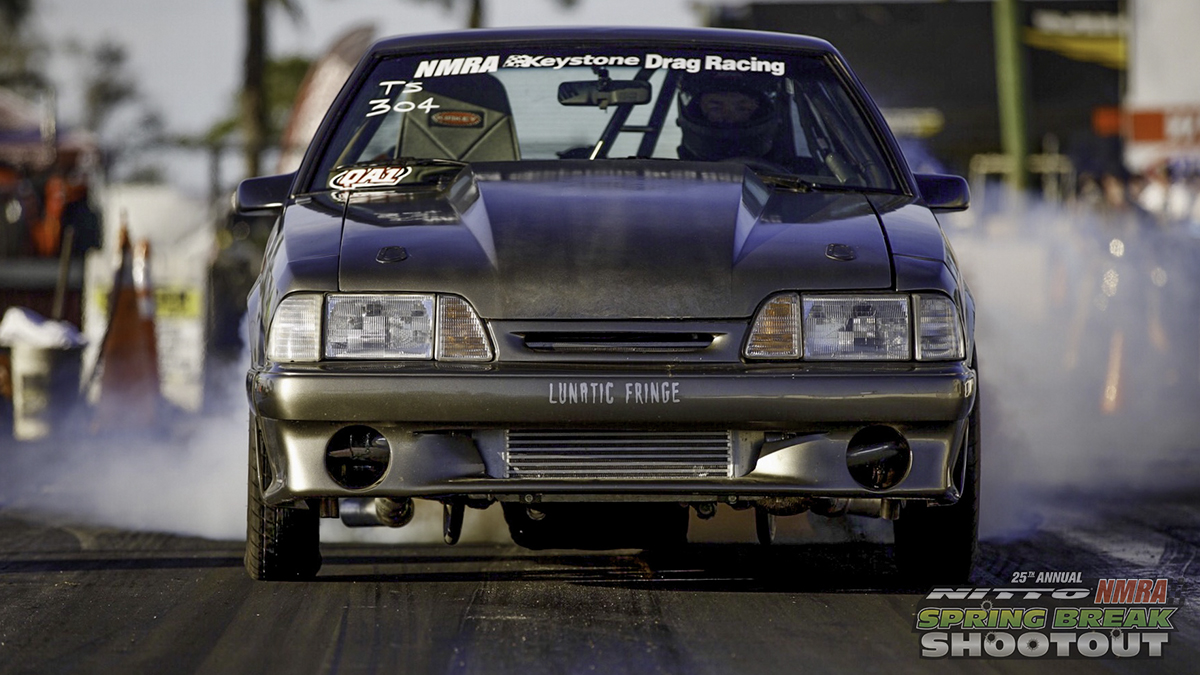 Canadian Jeff Bloem had a pretty good outing at last year's NMRA Spring Break Shootout event, collecting runners up finishes in QA1 True Street, IDIDIT Performance Outlaw True Street, and the JLT Performance Spring Break Shootout classes. Over the winter, his Mustang received a 25.5 chassis update and the turbocharged machine has ben as quick as 7.70 in the quarter-mile. There are several high-7-second cars on the property he'll be competing with, though, including Mike Jovanis who edged Bloem out for the win in one of the aforementioned categories last year.

For the 2019 season, the True Street winners from each race, along with the winners of the Spring Break Shootout and the Gateway Rumble in St. Louis will all compete in the IDIDIT Performance King of the Street competition to be held at the NMRA finals in Bowling Green later this year. With two of those entries on the line at this race, there is even more at stake for the racers. 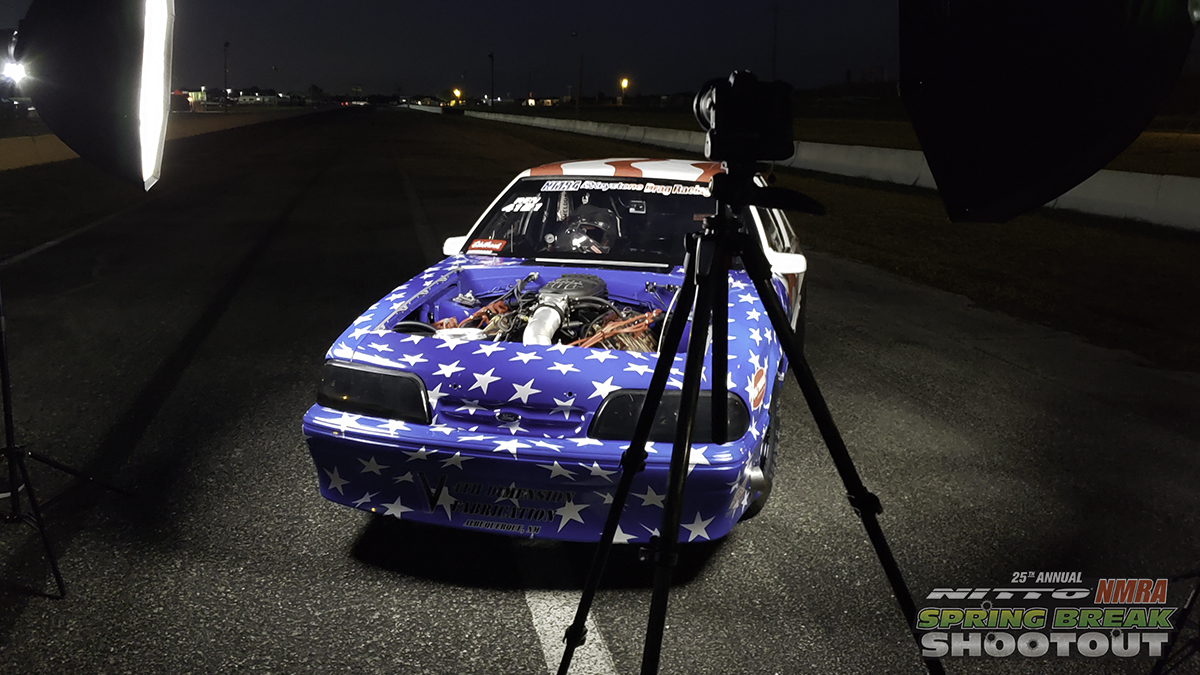 Feature photography kicked off yesterday as NMRA shooter Kevin DiOssi had Haley James' Edelbrock Renegade Mustang in his viewfinder last night. James and her team decided to step up from the Coyote Modified class she ran last year to the Edelbrock Renegade class for 2019. A new custom wrap was part of the off-season upgrades and James will be spooling up her turbocharged machine today for qualifying. 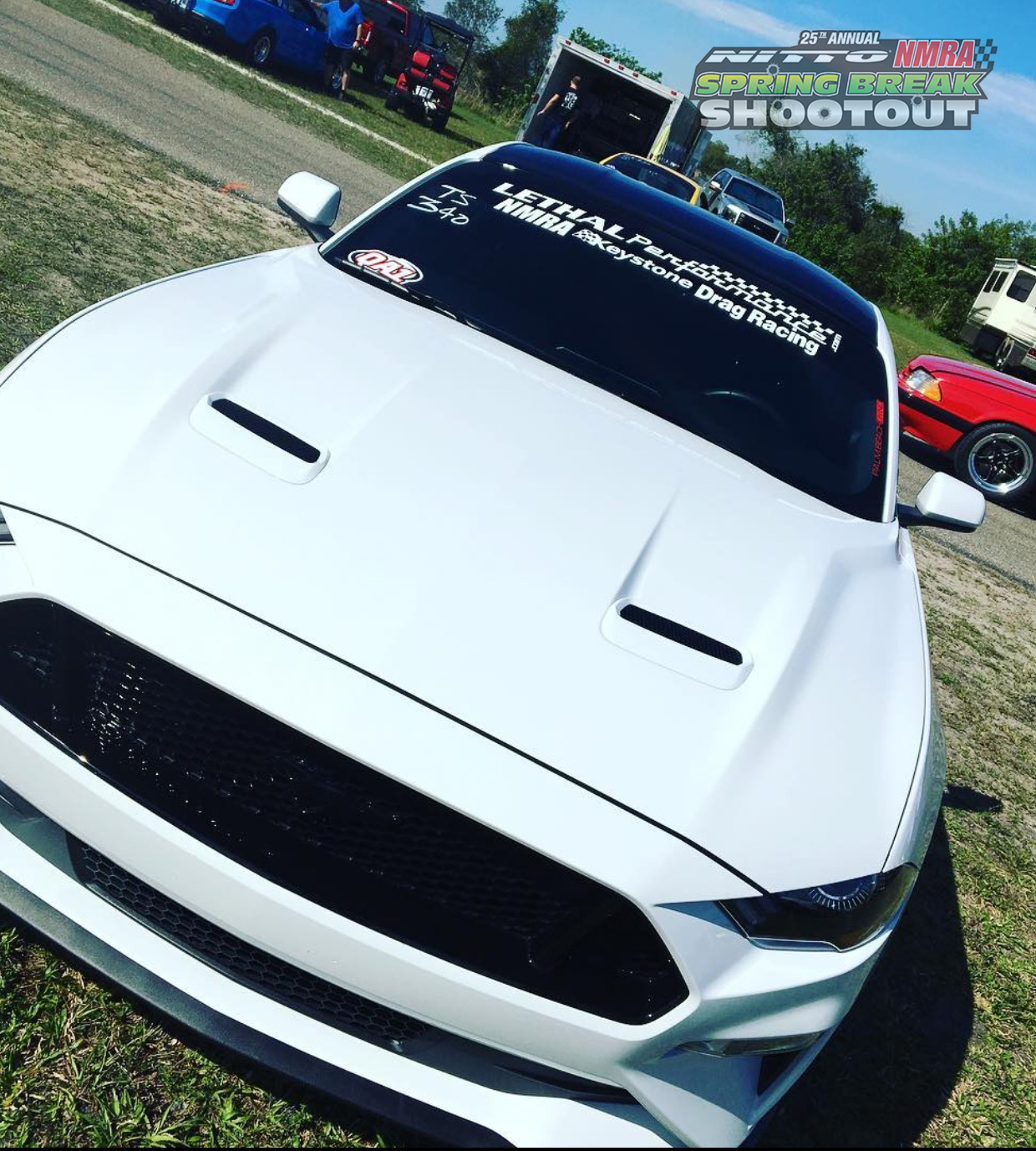 Rick and Leticia Hughes of Bowling Green, Kentucky, are here running in QA1 True Street. Their 2018 Mustang has been tweaked by the crew at Palm Beach Dyno, and it has run in the 10s without boost or nitrous. Rumor has it that Leticia has clocked the quicker time in the car, but only one of them can drive it in this weekend's True Street competition. 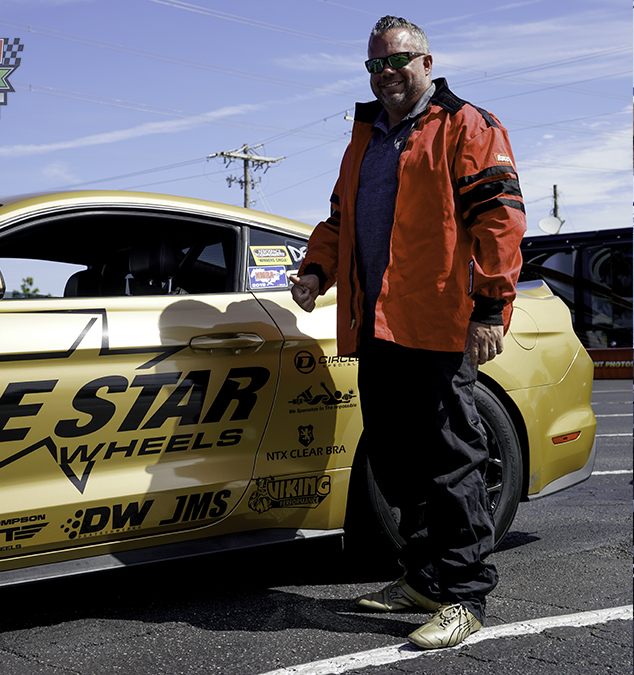 Having done well with his previous 2010 Sunset Gold Metallic Mustang, Roush Performance Super Stang competitor Miles Wagoner decided to have his 2016 Mustang rewrapped for the 2019 season with a very similar gold hue the base color of choice. This weekend he's wearing his lucky gold shoes as well, and hopes to put his Edelbrock E-Force Supercharged Mustang into the Aerospace Components Winners Circle at the end of the weekend. 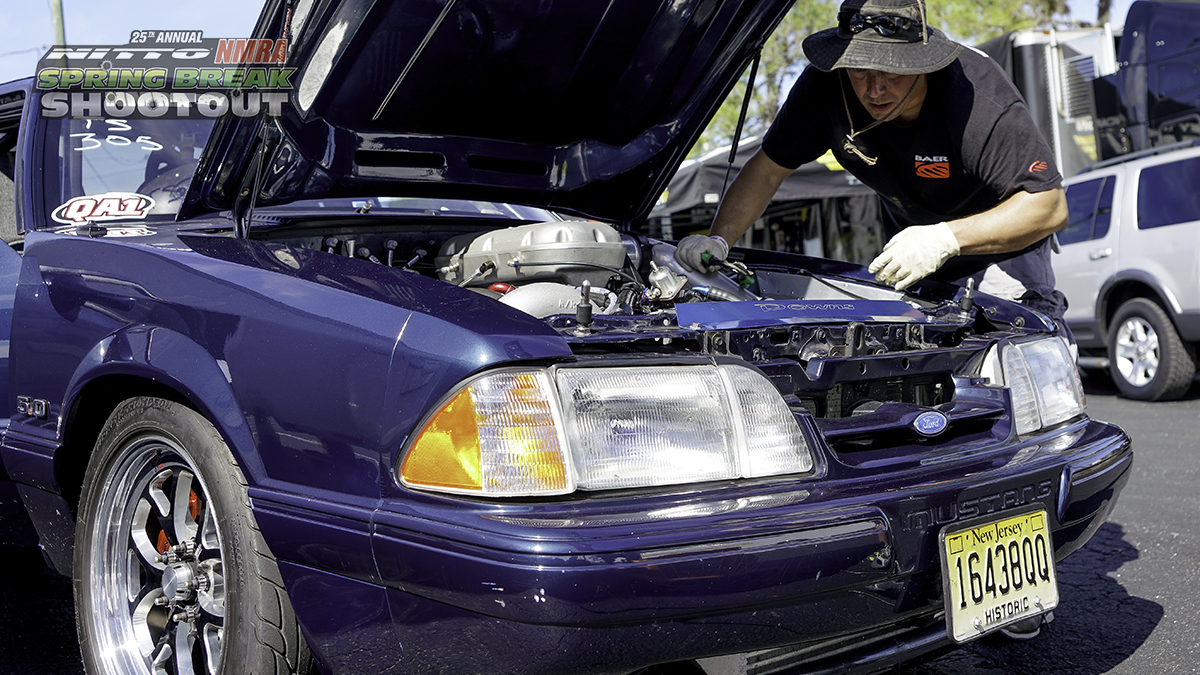 Multi-time QA1 True Street winner Mike Jovanis collected a win at this event last year, not in True Street, but in the Outlaw True Street category that was held last year. His Fox-body Mustang has been mid 7s in the quarter-mile, but Jovanis was on the hunt today for a smaller turbine housing for his turbo as he felt that the current one was a little too large and not optimal for the combination. 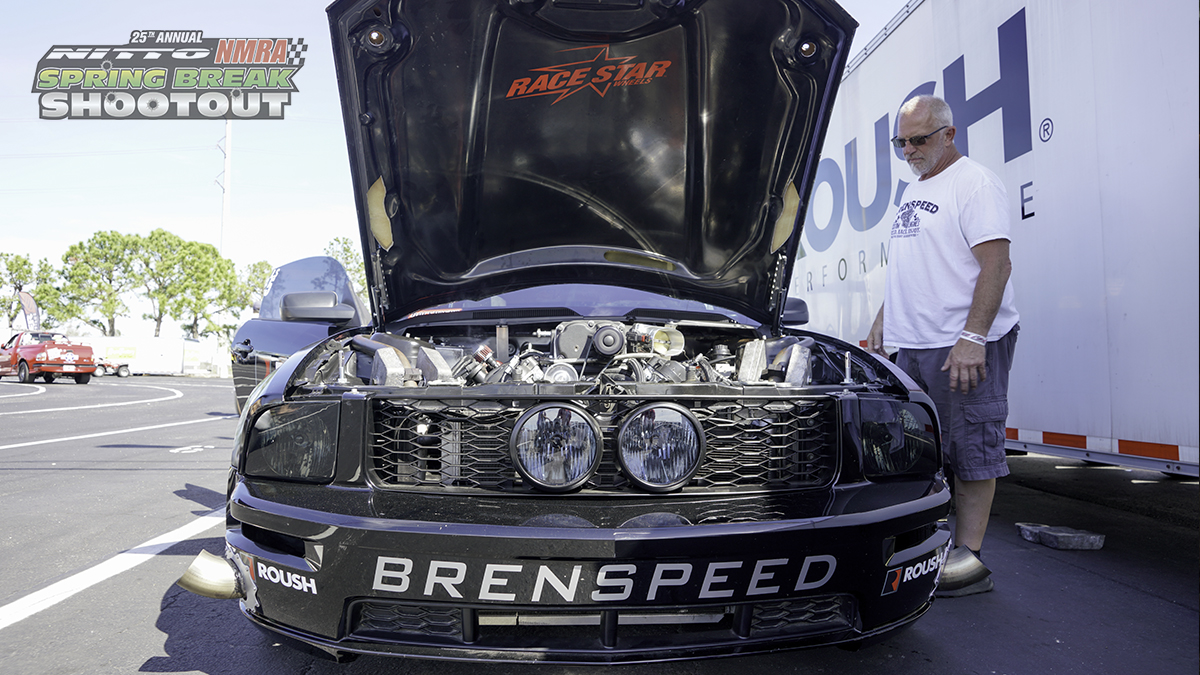 Kent Nine of Indiana finished as the runner up in the first running of the NMRA's Limited Street class at this event last year. At that race, he was highly outgunned with his loaner Roush Mustang street car, but consistency paid off to get him to the final round. Late last year, he finally got his own S197 Mustang convertible fired up, and the Roush Performance-sponsored, supercharged machine clocked an easy 9.10-second pass yesterday during test and tune. With a little hotter of a tuneup, Nine expects to be i the top half of the field once qualifying is complete tomorrow.

Justin Jordan ran into trouble during warm-up yesterday when a secondary timing chain snapped on his brand-new MPR Race Engines Coyote for his Hellion Turbo Battle ride. One quick call to MPR on Thursday caught Tim and Tyler Eichorn before they left their Fort Lauderdale based shop. The father and son engine builders loaded up a new set of valves and set of chains. Tyler installed a new set of valves, replacing the bent ones, and helping Jordan drop the heads back on the car. They say there is a chance they can get it together for this afternoon's first qualifying session.

Dom Donato stuck his VP Racing Fuels Street Outlaw Mustang on its bumper for the second time this weekend. The car is sporting a Precision 88mm turbocharger and Craig Pachar of Triangle Speed Shop is handling the tuning chores. Donato made the switch this year from Edelbrock Renegade to Street Outlaw. He is looking to push the L&M Race Engines 5.4L into the 4.40s this weekend, once they get the front-end to stay down. 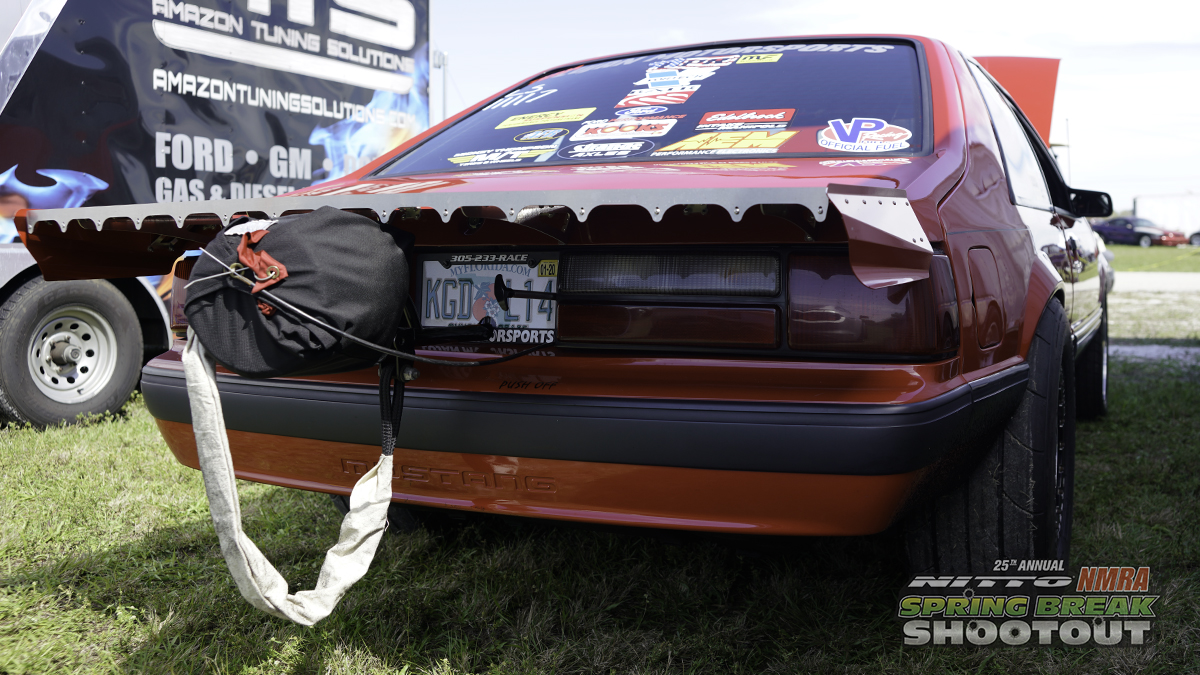 As far as we know, Will Lujan's '90 LX is the only registered and insured street car running in NMRA Limited Street this weekend. Lujan wanted to run in the class, but his other ride didn't have the right chassis setup, so he plucked this hatchback out of Michigan. The clean Fox body only has around 40,000 miles on it, but packs a serious 363ci engine managed by an AEM Infinity EFI and boosted by a Vortech Ti supercharger. Lujan is hoping to break into the 8.80s this weekend with the new combination. 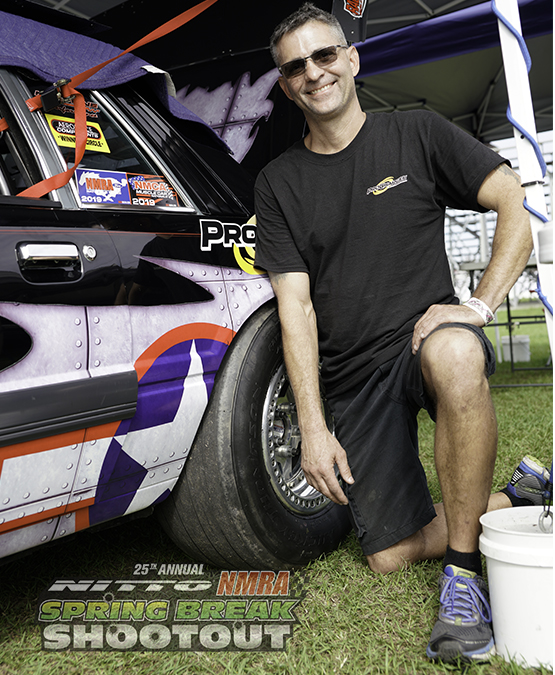 Joe Guertin has owned his 1985 Mustang for over 20 years, and at one point in time, commuted to work in the 5.0-liter coupe. He stepped up to Edelbrock Renegade for 2019, but in the process of updating his company stickers on the car, some of them managed to take the original single stage paint with it. Guertin, a big fan of model airplanes, decided to cover up the blemishes with some custom vinyl wrap that harkens back to the legendary P-51 Mustangsproblem solved! 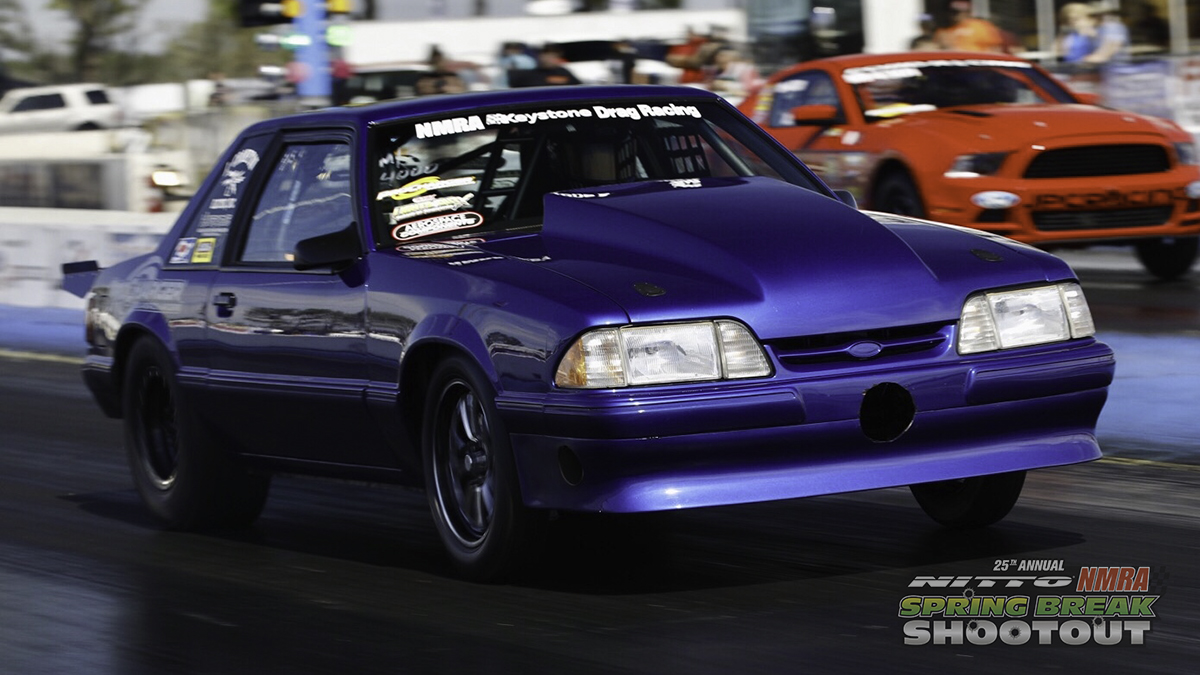 Brad Schehr of Ft. Myers, Florida, has been struggling for some time getting the tuneup just right on his '89 Mustang coupe. It's propensity for spitting out head gaskets has gotten old, but Schehr feels that they can make steady progress on the tuneup this weekend and get the car's CRE Performance 365ci and ProCharger D1-X blown bullet to stay alive for competition in the NMRA's ProCharger Modified Street category. 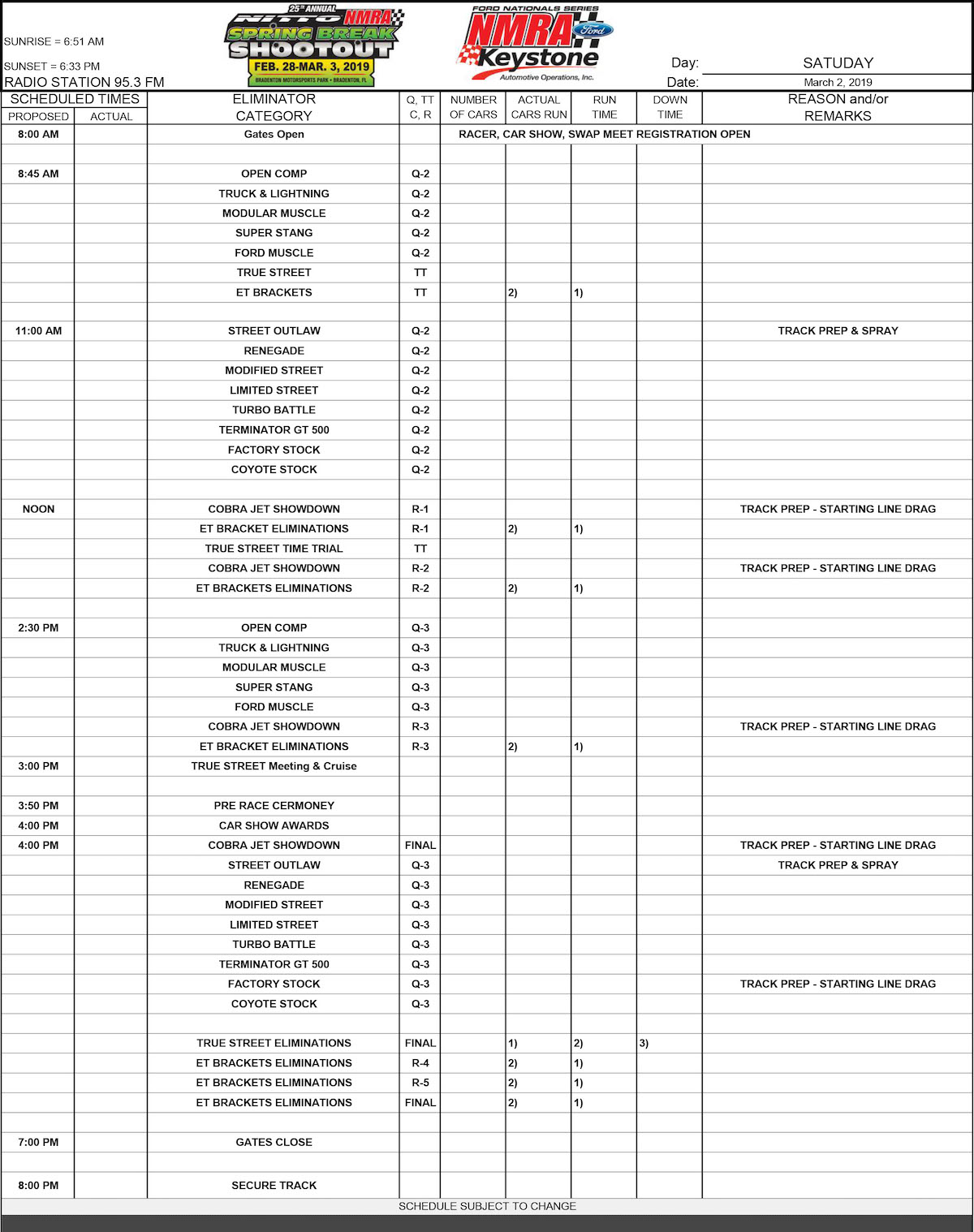