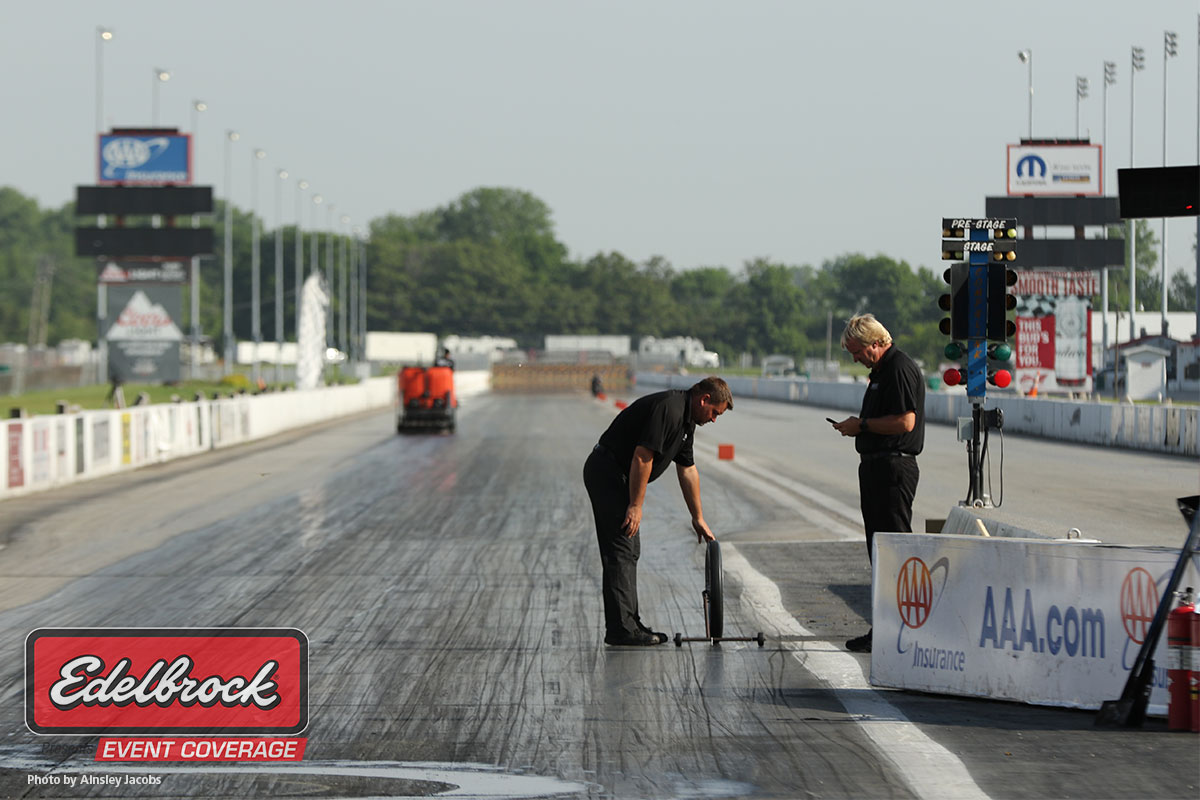 We're minutes away from kicking off the Inaugural NMRA Gateway Rumble and conditions for today's racing look favorable. Master track prep guru Kurt Johnson of Total Venue Concepts is overseeing the racing surface this weekend here at World Wide Technology Raceway at Gateway, and we'll keep you up to date with all the breaking news as it occurs. 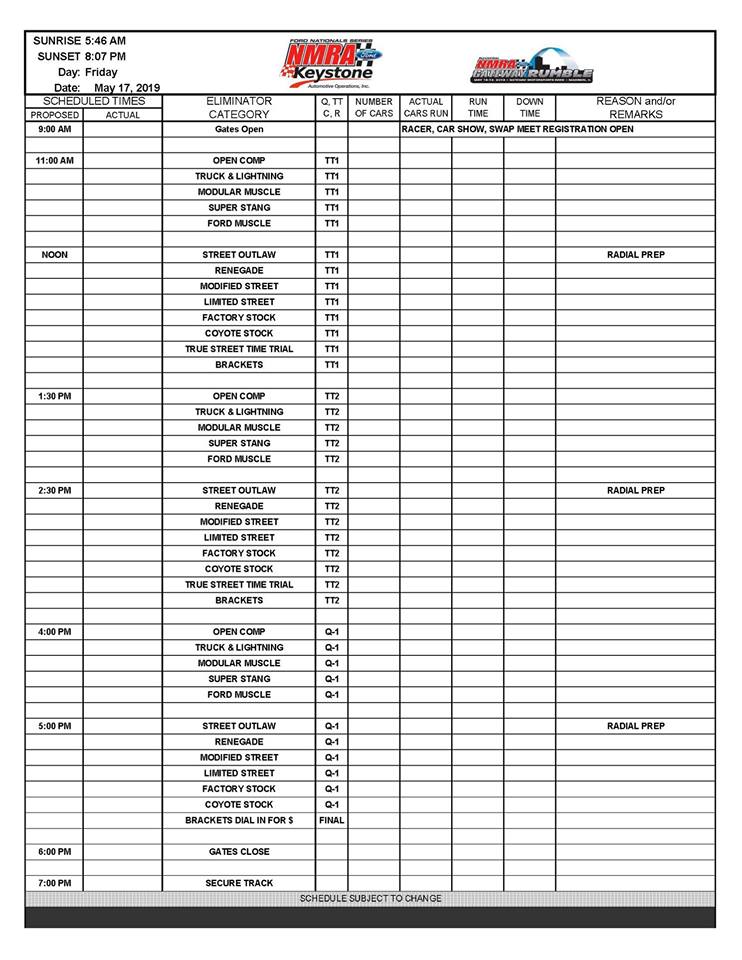 The official schedule for today's time trials and qualifying sessions. 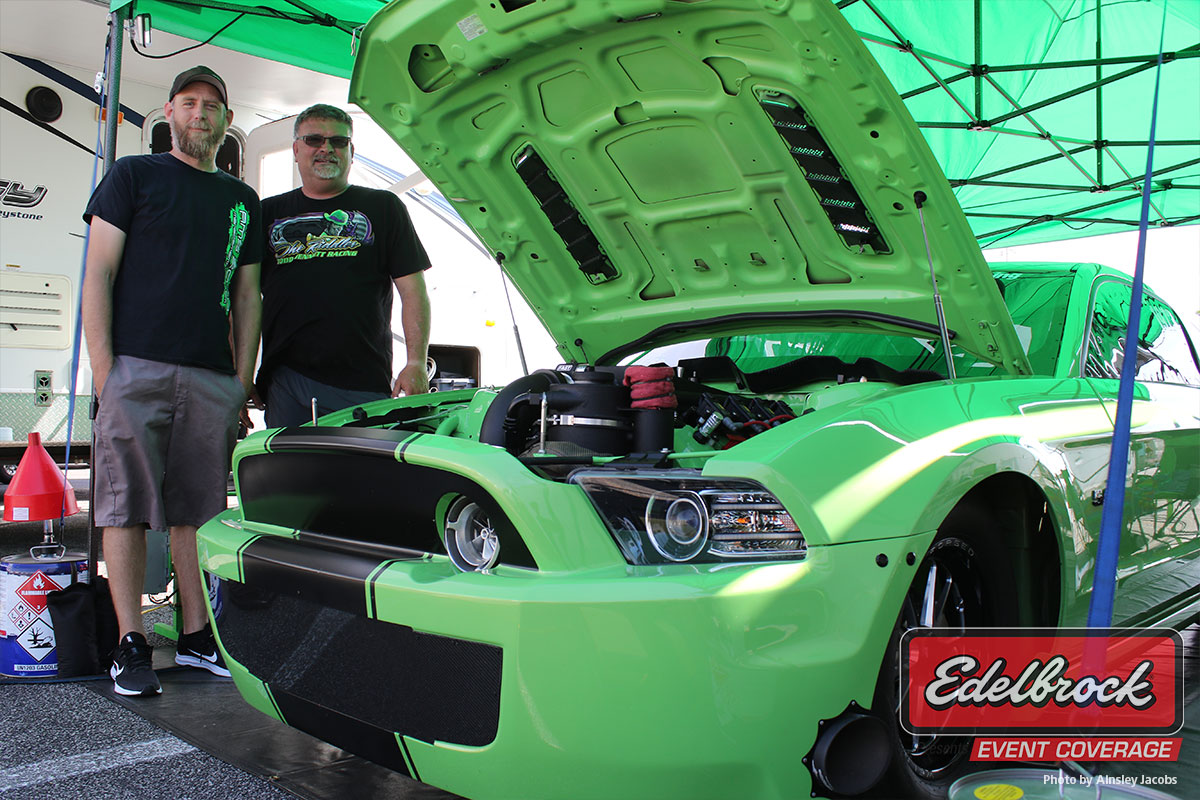 Local Missouri-based racer Todd Bennett (right) has run with the NMRA before in the Hellion Turbo Coyote Shootout category, but will be fielding his 13 Ford Mustang GT in VP Racing Fuels Street Outlaw for the first time here in St. Louis. The stunning Gotta Have It Green pony car blends track-worthy performance with show car good looks, and was a 3,600 lb twin turbo street car as recently as 2018 “ now its an X275-ish contender, with JPC Racing mastermind Eric Holliday (left) at the helm. A Voodoo block-based Rich Groh Racing engine and 88mm turbocharger propelled the 25.2 SFI-certified S197 to a 4.54-second hit while testing two weeks ago at Cecil County Dragway, and the men hope to improve those numbers this weekend. 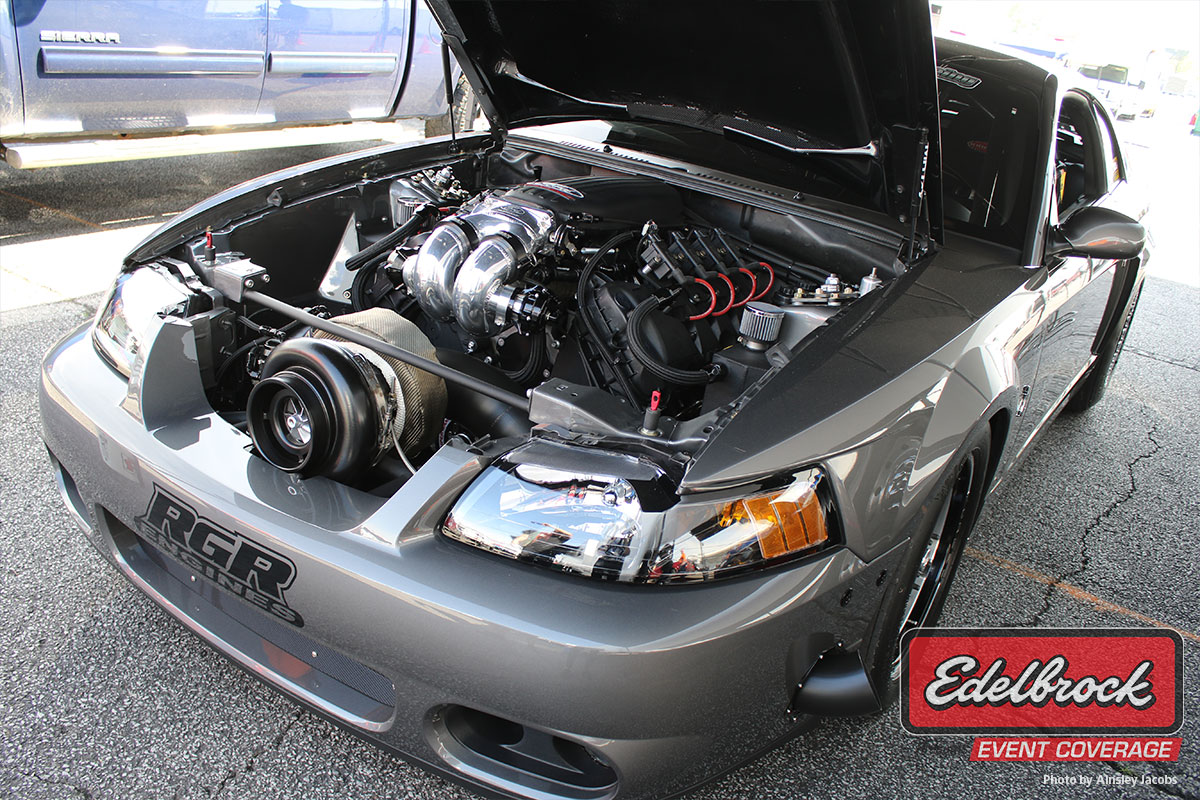 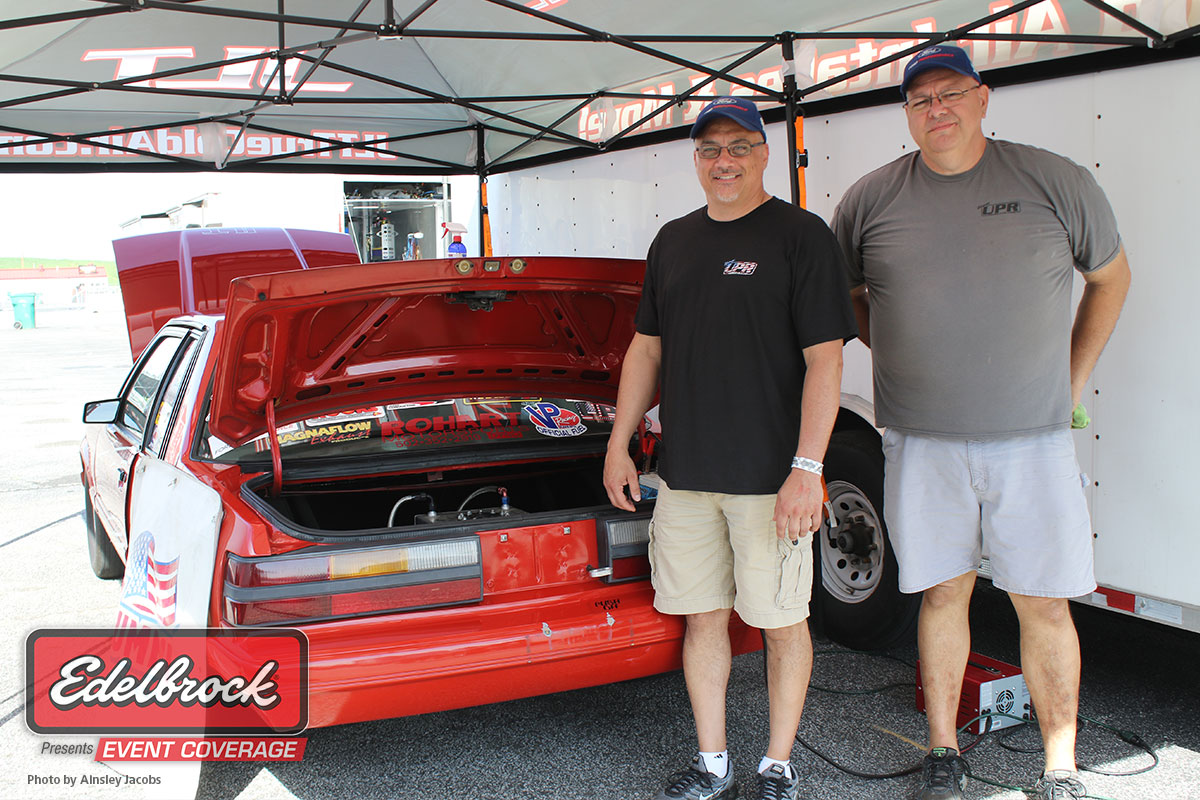 After the season opener in Florida this year, G-Force Racing Coyote Stock hot shot Jacob Lamb (left) put an all-new Anthony Jones Engineering 9 rear end in his 86 Mustang Mustang. The Kentucky resident has tested through all of the class-legal gear ratios and is working on the last option this weekend, noting that the car is doing better but its still not quite where he wants it to be. He plans to only make minor adjustments to the clutch this weekend, and is pumped to have JLT Performance as a new sponsor for 2019 with their cold air intake and oil separator on board. 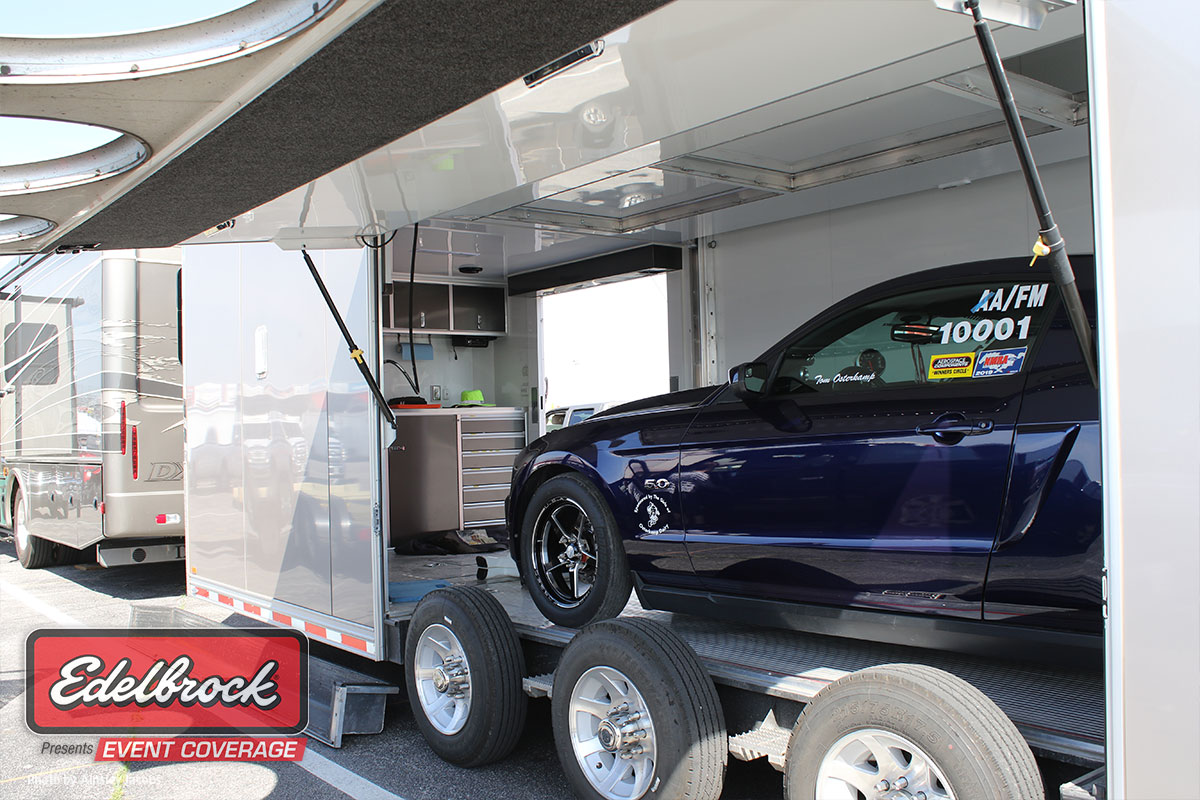 In the Race Star Wheels Ford Muscle pits, Tom Osterkamps got a really neat setup. His trailers side lifts up to not only provide a shaded overhang, but to also display his Mustang like a framed work of art. 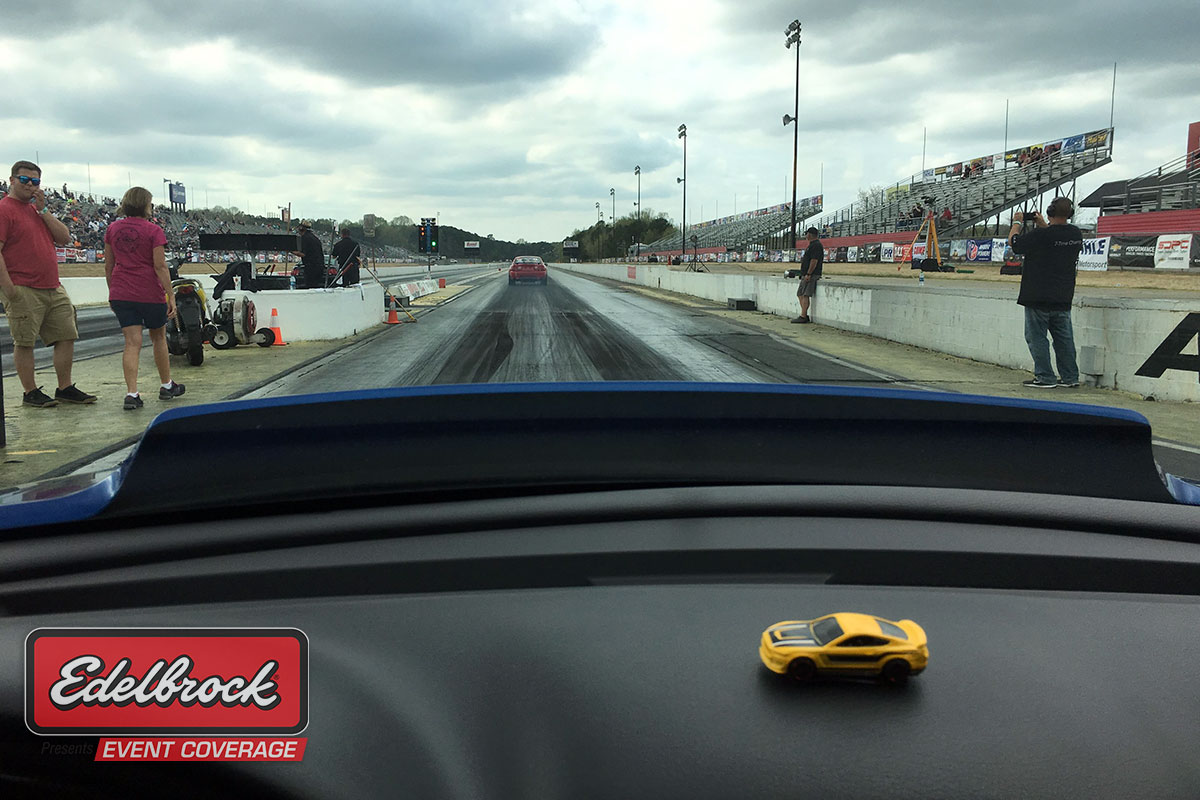 Exedy Racing Clutch Modular Mustang mainstay Gary Hollywood Parker has a new Mustang in his pit, but its not what you might think. For his birthday back in February, Parkers 4-year-old grandson, Luke, sent a sweet gift. A month prior, Parker had been visiting his daughter, Allison, in California and was playing with Luke when he mentioned his favorite Hot Wheels car was the yellow Mustang. Well, Luke remembered, and thoughtfully included it in Parkers present a few weeks later “ and now the sentimental toy sits atop Parker's dash as a showpiece so that Luke can join his grandpa on every run down the track. 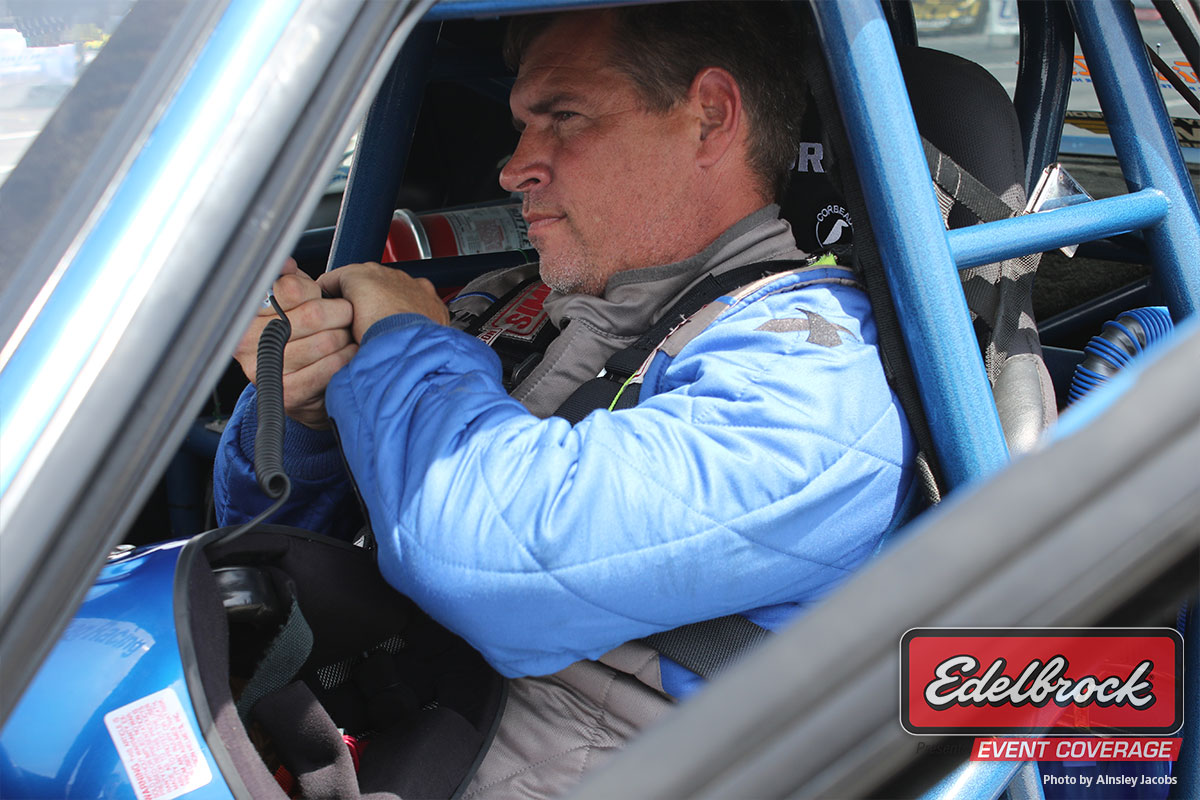 Mike Freeman strapped in and ran well in the first round of qualifying, going 5.750 at 139.11 mph in his 88 Fox body put him third so far in Edelbrock Renegade. 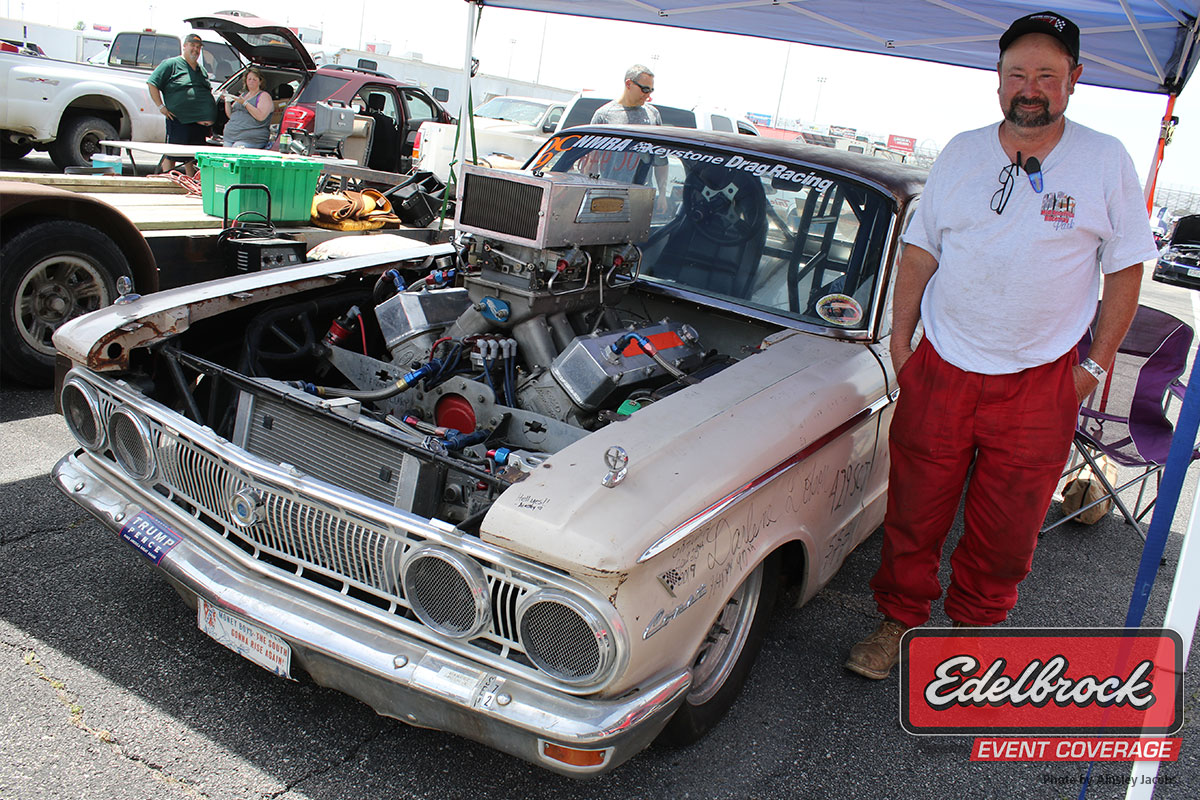 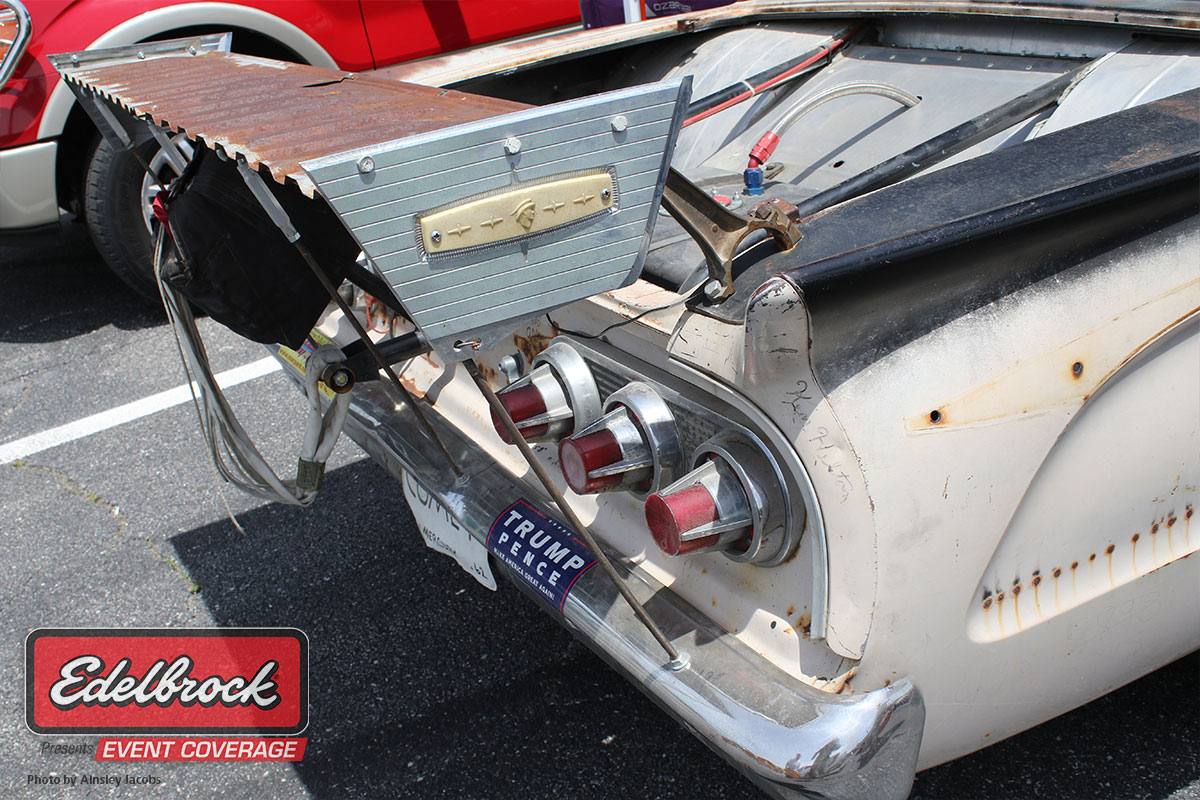 Heres something you dont see every day: a complete tube chassis 62 Mercury Comet S-22 that still retains its original barn-find patina perfection and holds its own in ARP Open Comp. Owned by Ronnie Mass, the Missouri resident ran with NMRA in the early ˜00s with a 63 Mercury Marauder but this is his first time back since 08. The car had sat back behind Masss pond levee for nearly two decades before he decided to bring it back to life in a new, lightweight race-ready format. Certified to run 7.50s, the home-built cage and car are truly a work of passion. A 598 ci big block Ford engine that will see a blower someday soon currently breathes a 10:1 compression ratio through its Holley dominator carbs and tunnel ram intake. Nicknamed MARhick “ a play on Masss old hometown track of Mid-America Raceway “ the rat rod Mercury also runs a JW Performance 2-speed Powerglide built by M&M Transmission with a matching M&M converter should make 1,200 whp with the blower installed. There are a lot of really interesting details scattered through, including the rear wing which was fabricated from a set of big block connecting rods and the ridge cap off an old barn. 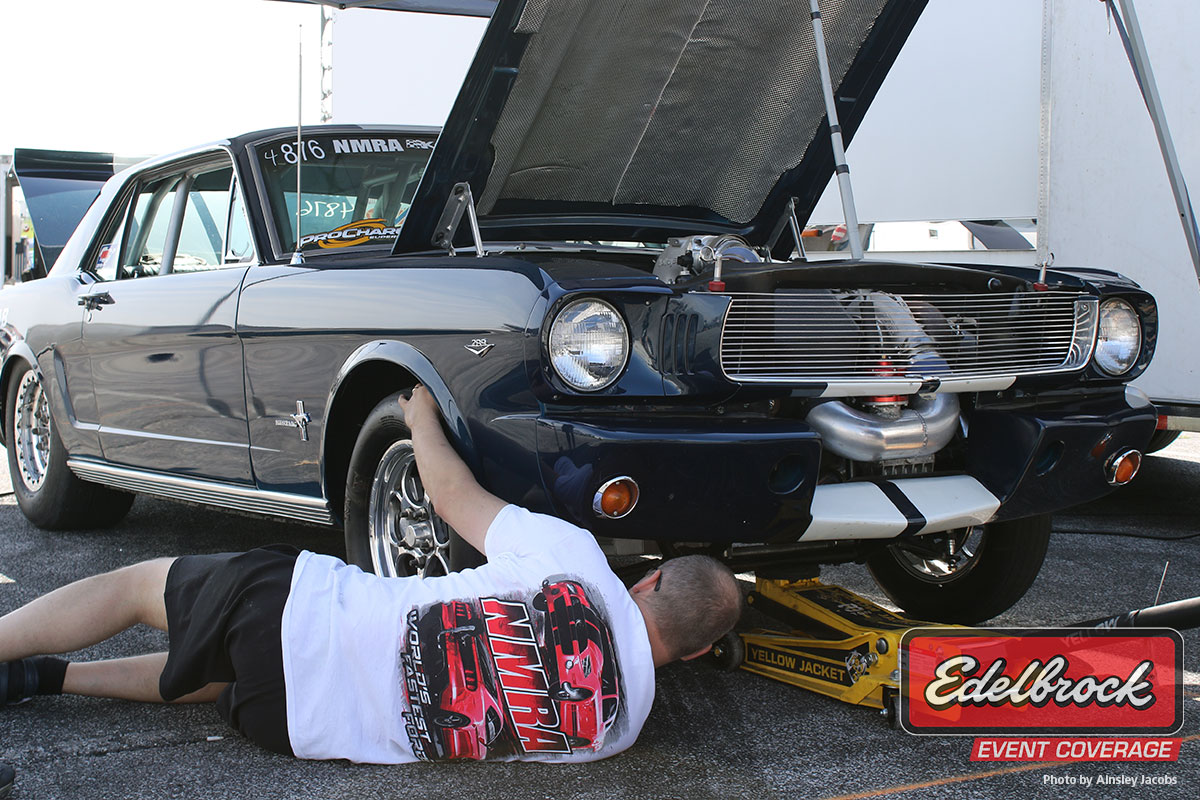 In ProCharger Modified Street, Kurt Welfel and his beautiful blue ˜65 Mustang put down an 8.331 at 161.69 mph during to lead after the first round of qualifying today. Wanting to tighten up the front end a bit and maximize the chassiss potential, Welfel has installed an AJE Suspensions kit which reconfigured the front strut towers and reduces the amount of space they occupy in the engine bay while updating the outdated design to a more modern SN95-style one. Under the hood, a self-built 330 ci small block Ford stuffed with Wiseco pistons and topped with Dart heads can be found with a turbo kit from Hellion Turbo, intercooler from Alton Clements, Neal Chance torque converter bolted to a Mr. Wendells Motorsports transmission, and fuel pumps from FuelLab. 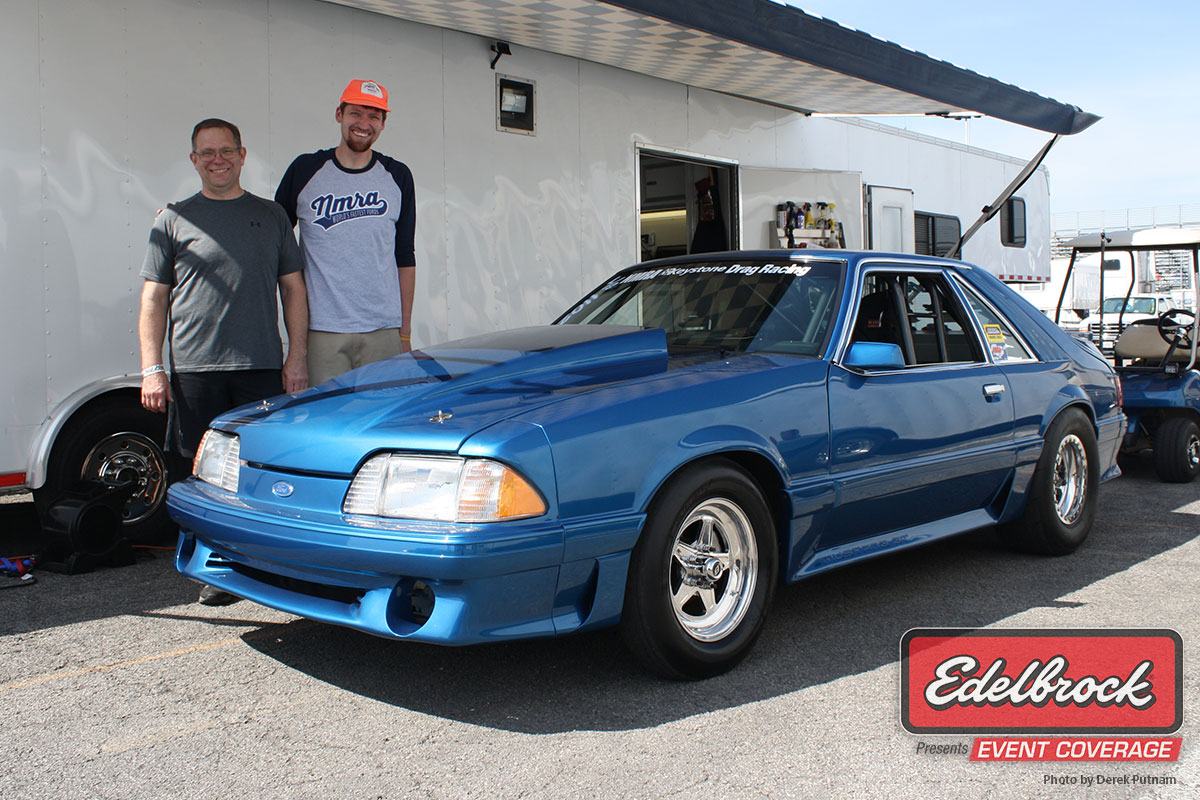 Using the 79 Mustang he purchased as his first brand new car, Michael Lewandowski is proving nitrous can be a player in the Advanced Fuel Dynamics Limited Street class. We looked at the rules for the class last year, and decided to make the change for 2019, said Michael˜s son Austin about the jump from Open Comp to Limited Street. A 302-based 351 cubic inch engine topped with a healthy shot of Nitrous Oxide Systems laughing gas provides the motivation for high 8-second runs, and the father-son team clicked off an 8.90 at 154 mph to sit second after the first round of qualifying. 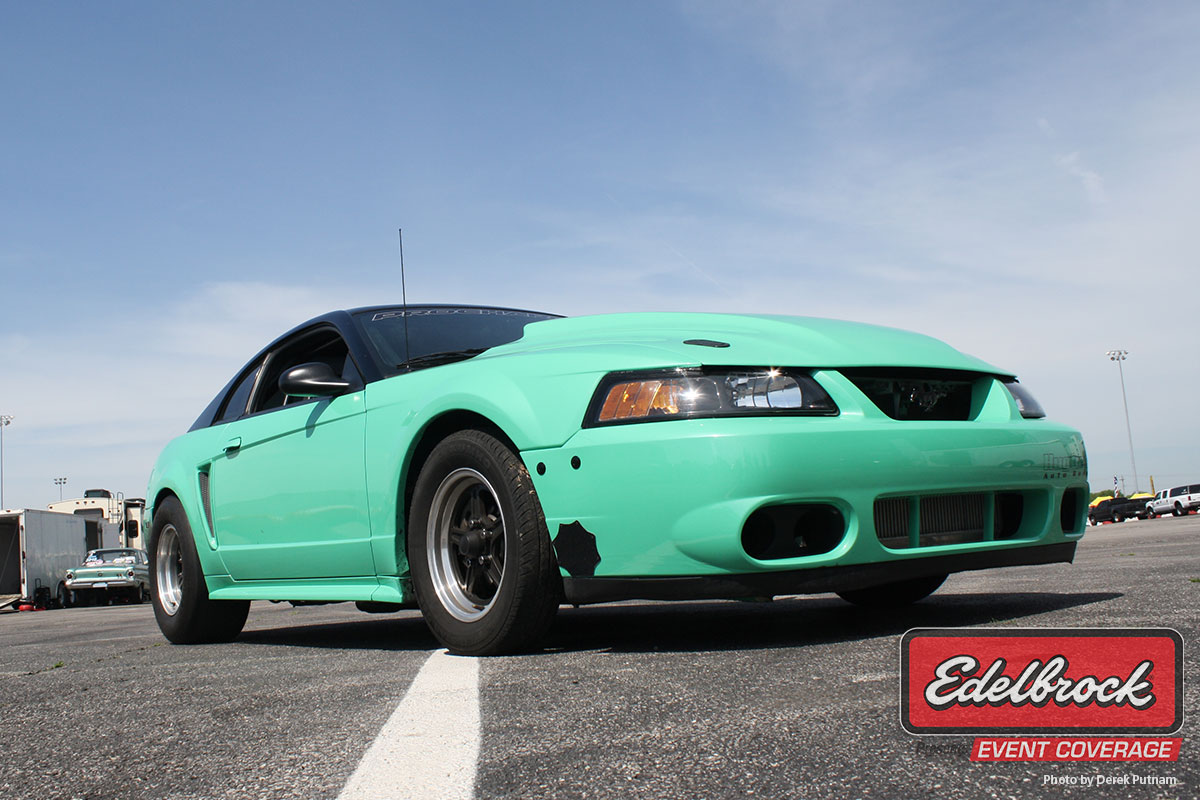 Taking a break from his day job with ProCharger, Daniel Rosner made the four hour trek to compete in the QA1 True Street class this weekend, along with his father Paul and Shelly. Ive only run a no-prep race this year, said Daniel. Im looking forward to running True Street, and hopefully grab a spot in the Stifflers Chassis and Suspension Gateway Rumble class on Sunday. To make the power to earn that spot, Daniel stuffed his Mustang with a 5.4-liter modular engine upgraded with a set of Cobra-spec camshafts, and added a P-1X Procharger to provide 18 pounds of boost. 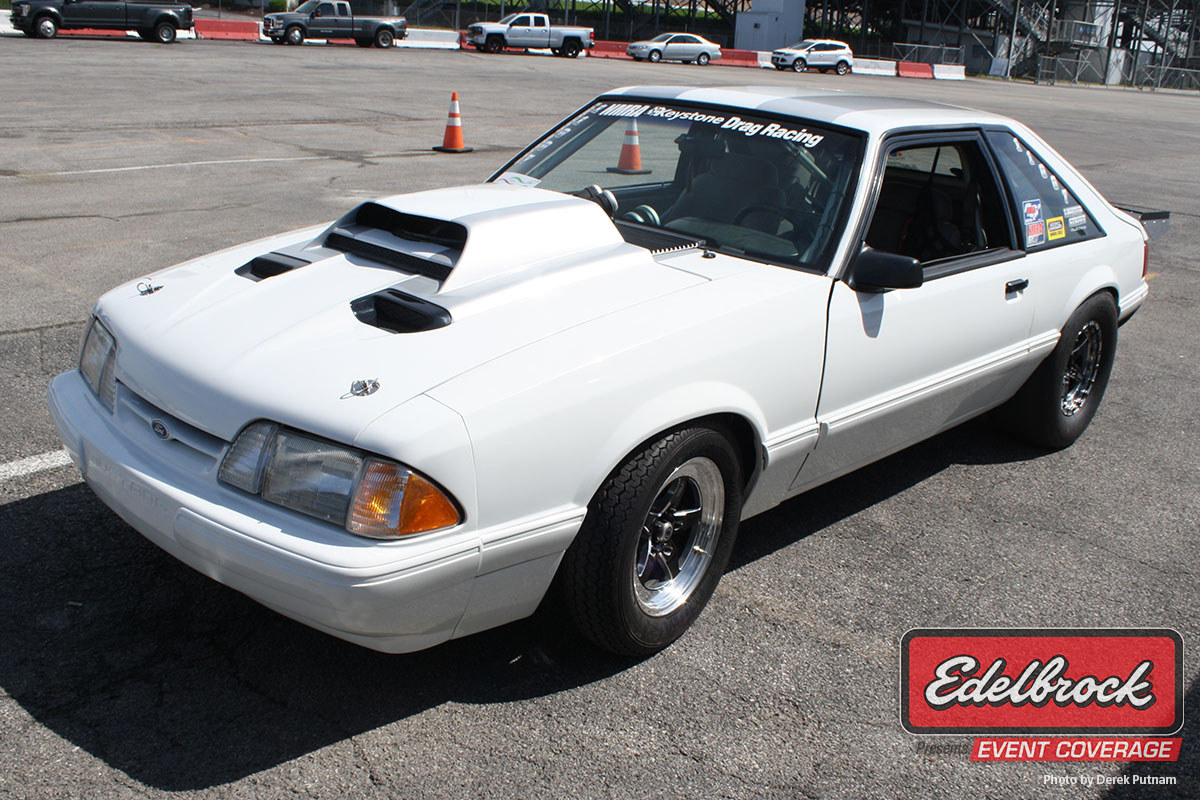 Kevin McCotter got a boost on his naturally-aspirated combination, as the Advanced Fuel Dynamics Limited Street rules were recently changed, allowing a Dominator-style carburetor as well as allowing a forward-facing hood scoop. I know Im an oddball for running this combination, said Kevin of his 460 cubic inch small block without a power adder. The rules changes gave me a lot more power, and Ill keep chipping away until I get to the front of the class. Its much harder here than in True Street, but Im determined to make it work. 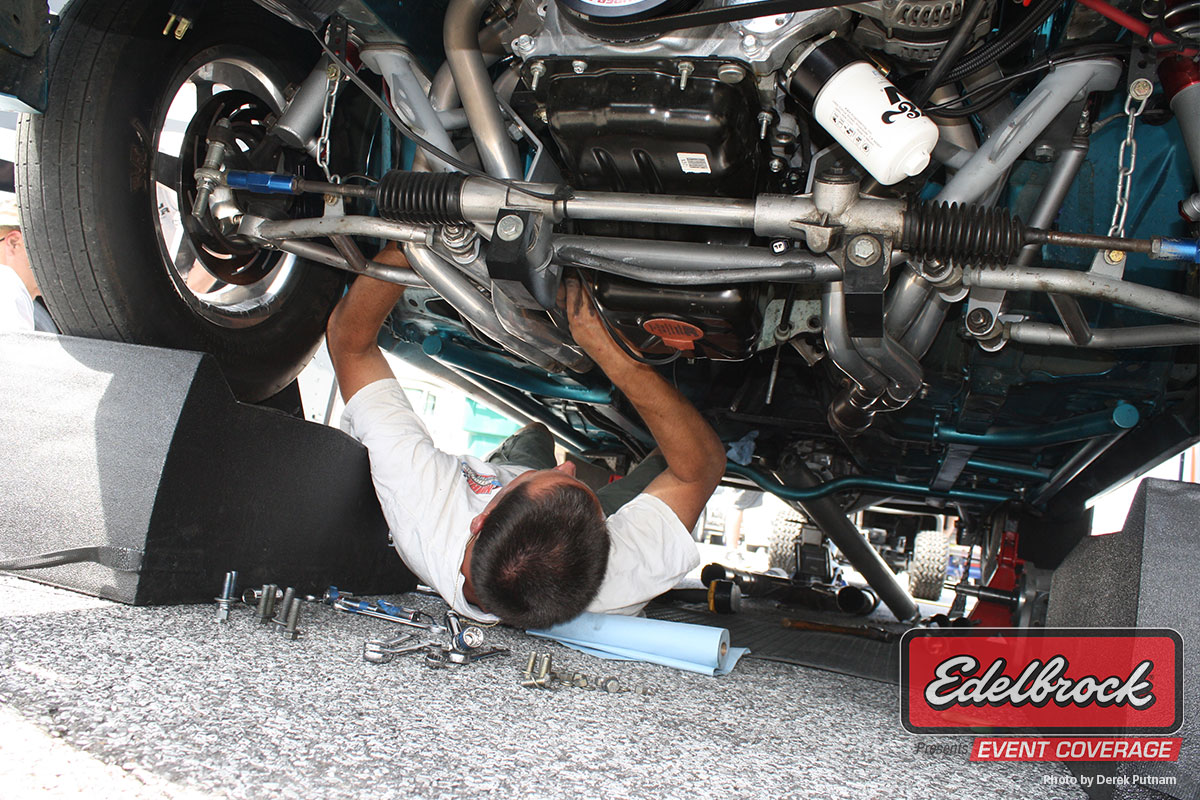 Darin Hendricks rolled in this morning armed with some mid-week testing on his 93 Cobra, but he skipped the first test session in G-Force Racing Transmissions Coyote Stock to change a throw-out bearing. I put a new clutch set-up from Black Magic in it recently, said Hendricks. But I wasnt happy with the clutch fork alignment. I figured it was easier to make the changes at the track before first-round of qualifying. Hendricks clicked off a 10.34 at 131 mph in the first round of qualifying, earning the sixth spot. 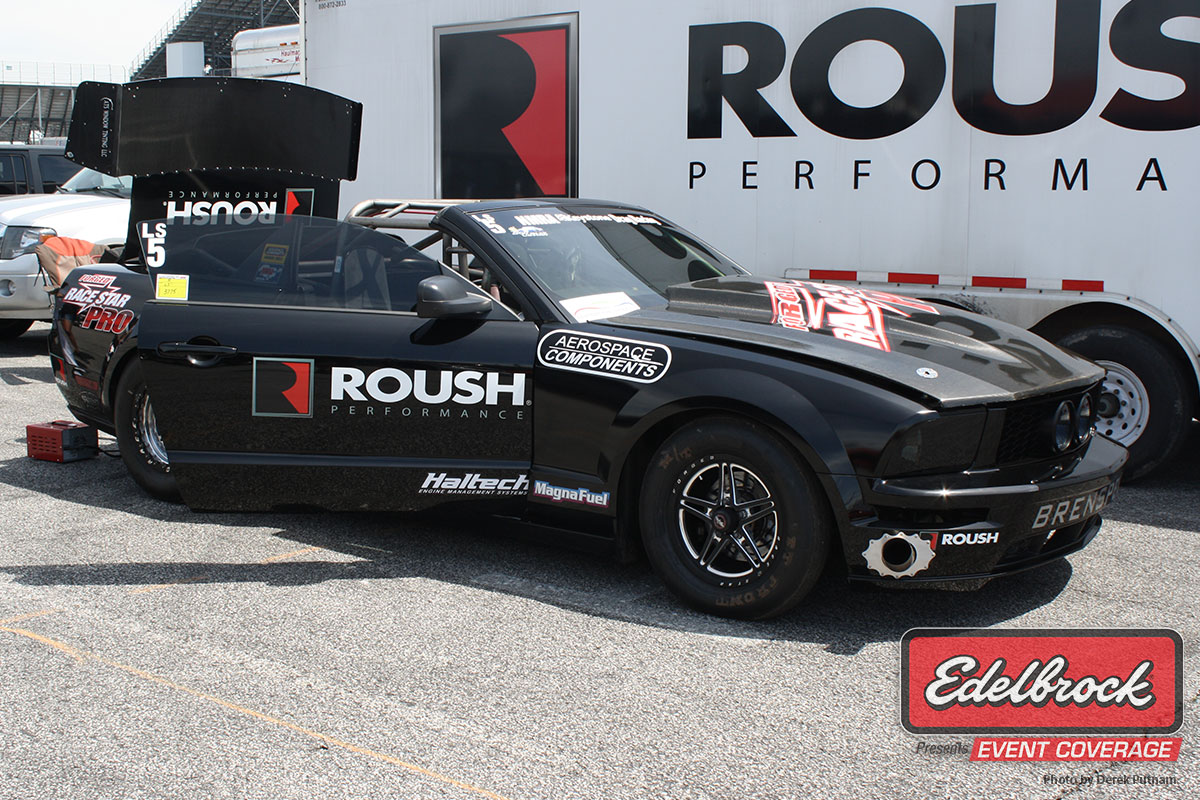 Kent Nine has collected a fistful of low 9-second time slips in Advanced Fuel Dynamics Limited Street so far, and hes hoping for the first 8-second run on the car this weekend. Weve been chipping away at it, trying different things with the blower pulley arrangement to get everything happy, said Kent. Their efforts in the first round of qualifying were rewarded with a solid 9.03 at 150 mph pass, Â putting the drop-top 2006 Mustang in the third qualifying spot on the sheet. 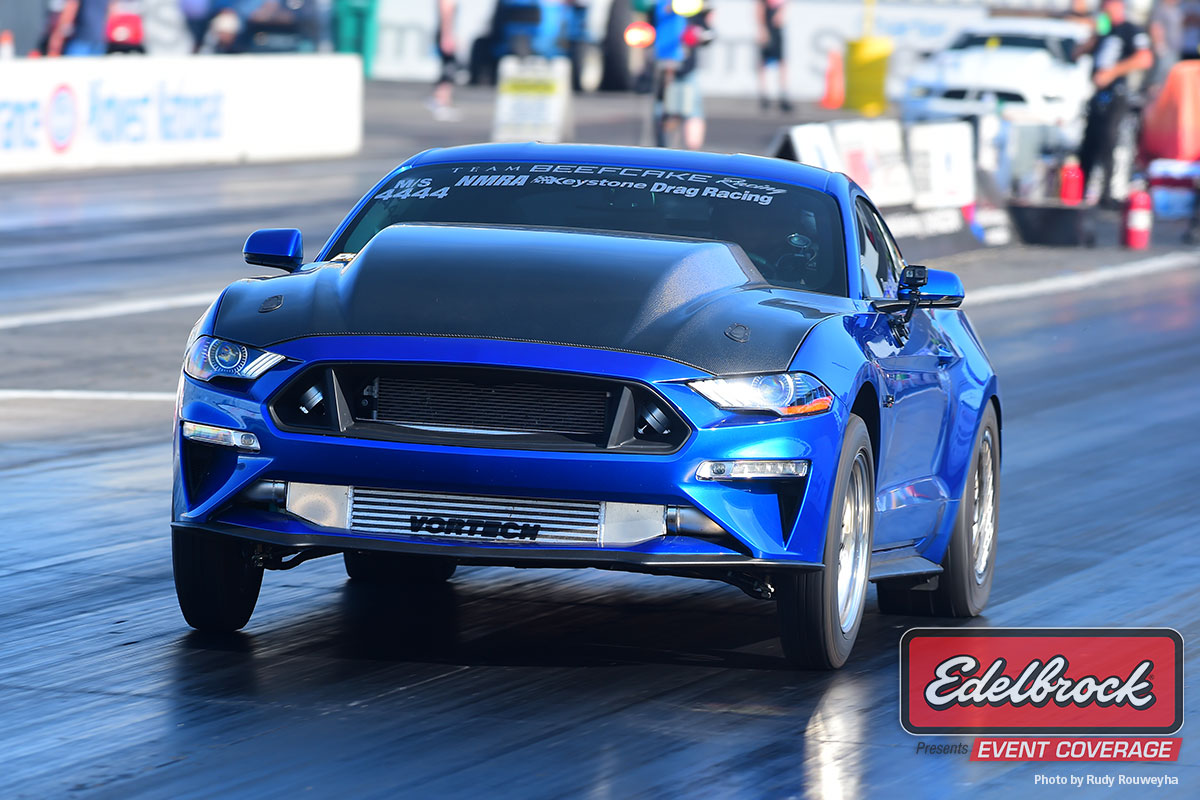 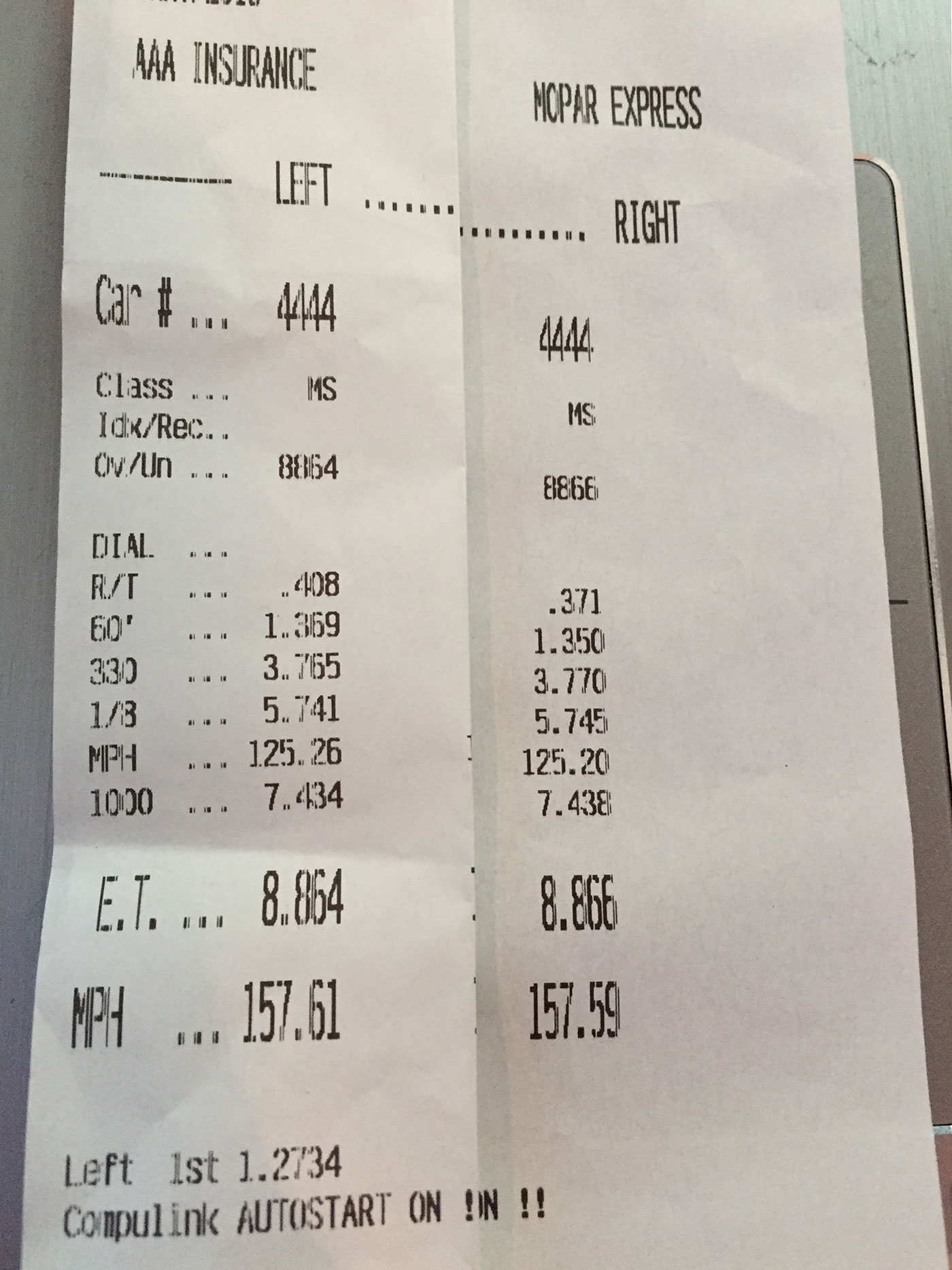 Terry Beefcake Reeves has made waves before in the NMRA series, but the longtime Ford fanatic achieved a personal goal in Friday testing by clicking off a pair of 8.86 passes in his 2018 Mustang while testing in the ProCharger Modified Street class, becoming the first 2018 Mustang to invade the 8-second range with a centrifugal supercharger. There have been a couple turbocharged combinations that have clicked off 8-second runs, said Terry. But no one had done it yet on the blower we run. To accomplish the task, a BES-built short block was mated with a set of MMR cylinder heads fitted with stock camshafts. Fore pushes the C85 fuel to the rails, and a Vortech supercharger provides the extra atmosphere. The power is passed through the factory 10-speed automatic transmission, upgraded with McLeod clutches and fitted with a Circle D converter. Weighing in at 4016 pounds, Reeves believes theres more in the combination, but itll take cooler air to do it. The run logs are perfect right now, he admits. With nearly 3,000 feet of density altitude here, Im sure I can get the car to run 8.60s when the NMRA visits Bowling Green later this year. >>> QUALIFYING RESULTS CAN BE FOUND HERE <<<