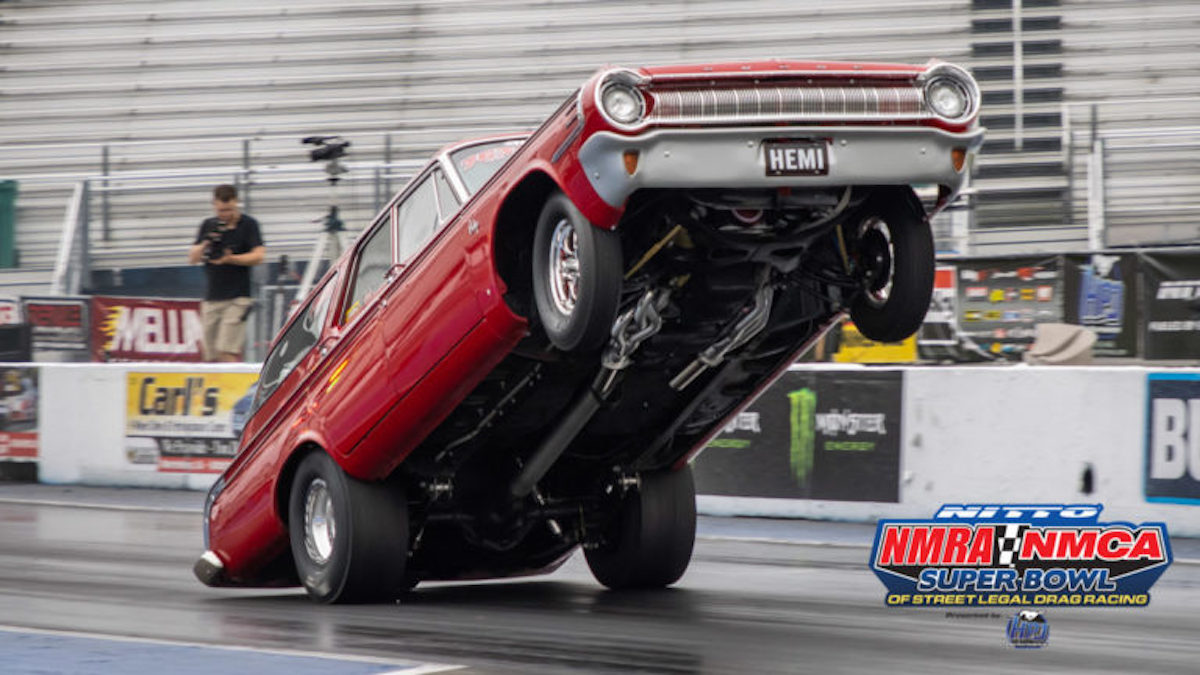 Engines have been fired for today's running of the Nitto Tire NMRA/NMCA Super Bowl of Street Legal Drag Racing presented by HPJ Performance at World Wide Technology Raceway in Madison, Illinois, and cars are already crushing it on the well-prepped track. While there was no testing yesterday because of rain, drivers who are currently making hits appear to be ready to go rounds in all-out attempt to get to the Aerospace Components Winner's Circle and represent Team NMCA or Team NMRA in the runoff for the coveted and cleverly-designed Nitto Diamond Tree Rings. It's been a few years since Orson Johnson entered an NMRA race, but he's back and competing in VP Racing Madditives Street Outlaw. Johnson bought this 1999 Cobra new off the showroom floor and has been racing the low-mileage snake ever since. He competed early in the BFGoodrich Drag Radial class with the original Modular engine, but has since switched to a 400ci small-block Ford and Precision turbo, backed by an M&M Transmission Turbo 400. Johnson's Mustang has been as quick as 4.30 to the eighth-mile in X275 competition. 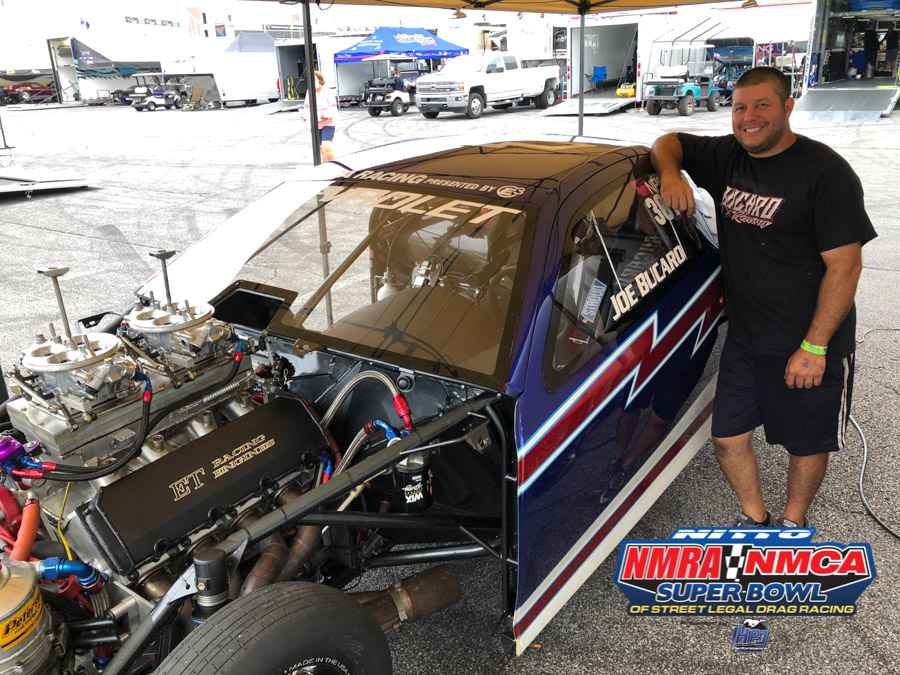 Three-time ARP Nitrous Pro Street champion Joe Bucaro is back in competition as he, along with his uncle Frank DeFilippis, have put together this 2008 Chevy Cobalt with a naturally aspirated powerplant and Liberty five-speed transmission. Bucaro has plans for a wild 490ci LSX-based engine that will use some of Energy Manufacturing and Callies billet components, but for now, he is running a 440ci big-block Chevy-based engine. Bucaro will contest the rest of the 2020 season and plans to have the new engine ready for next year. NMRA Street Outlaw racer Tony Hobson debuted his new Fox-Body coupe in Commerce in June, and he's already showed that his ProCharged machine is a contender after qualifying second and taking home a runner-up finish for the weekend. Basic maintenance was on order for today, and the HPJ Performance technician will be ready to put the boost to his DiSomma Racing Engines small-block Ford. 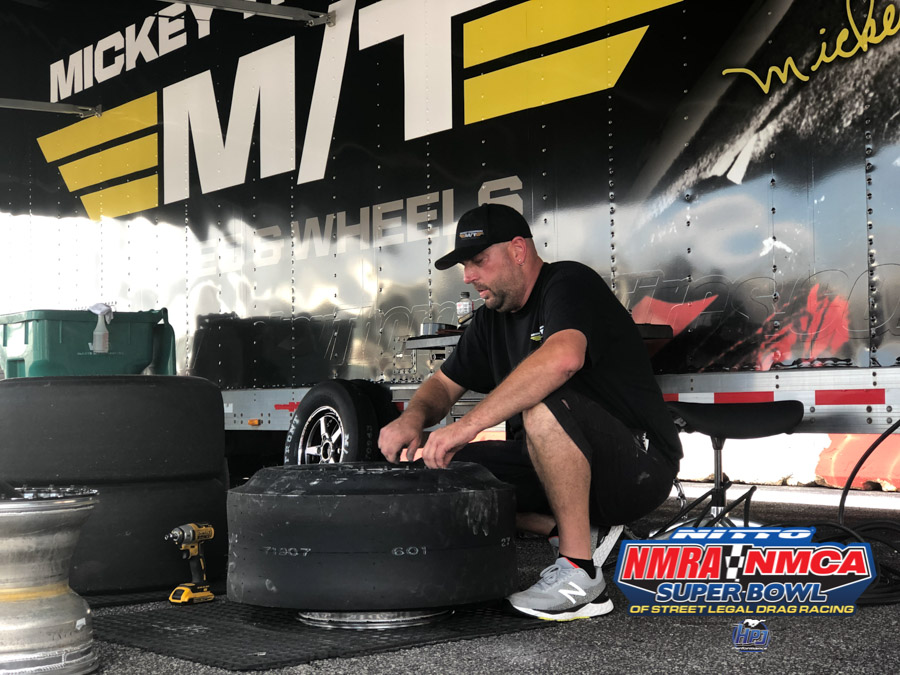 Mickey Thompson tires is on site helping racers in any way they can, and M/T's Buddy Legath is getting it done for them today. Portland, Indiana's Chad Wendell (At left) currently sits in third place in points for JDM Engineering Limited Street and he and Todd Dennis (At right) were referencing the spark plugs to better calculate the Holley EFI tuneup on his Rich Grow Racing Engines Coyote bullet. Wendell's S197 Mustang is one of a few in the class that still retain most of their OE components and street manners, with some even still being registered and insured for street use. Huntsville, Alabama's Steve Cagle made the switch from Edelbrock Xtreme Street to VP Racing Madditives/Mickey Thompson Street Outlaw with his 582ci big-block Chevy-powered Chevy Nova, and it was simply a matter of putting in a couple hundred pounds of ballast and some bigger nitrous jets in his Induction Solutions direct-port nitrous system. Cagle qualified 5th at the previous race in Commerce in a tight field, but came up short in eliminations. He'll be looking to improve on his 4.49 Georgia performance this weekend. While she's normally behind the video camera catching all of the NMRA and NMCA racing action, this weekend Alyssa Pett will also be competing in her convertible 2013 Camaro in Chevrolet Performance Street Car Challenge. While Dan Helmsing was away from racing for 46 years, hes back behind the wheel, and hes loving every lap in his orange Charger SRT8 powered by a naturally aspirated Hemi engine. Helmsing, who usually bracket races here at World Wide Technology Raceway, is competing in the Dodge / Mopar HEMI Shootout this weekend, and the St. Clair, Missouri resident, who has posted 12.30s in his car, said he will slow it down a bit for the categorys 13 second index, where he hopes to do well. Im just an old guy who likes to race in my car which is number 178 out of 392 made, said Helmsing. Parked alongside Dan Helmsing, above, is his friend, John Ridings, who made the haul from Springfield, Illinois, to take part in the Dodge / Mopar HEMI Shooutout in his Dodge Demon packing a 6.2L Hemi topped with a supercharger. Ridings has had a fair amount of success in the category, as he earned a win last year and a runner-up the year before at the NMCA/NMRA event at Route 66 Raceway in Illinois, and he hopes he can revisit the Aerospace Components Winners Circle this weekend. Ridings, who just arrived to the race track this morning, will dial in for the categorys 11-second index. Well see if I can do it again, said Ridings, as he rolled his race car out of the trailer. With continued rainfall, officials were forced to cancel the remainder of today's program. Gates will open at 7:30 a.m. on Saturday, and at 8 a.m, we'll wrap up index time trials before going into more qualifying and the first round of eliminations for categories with 17 or more entries. We look forward to seeing everyone tomorrow.