The NMRA is here at beautiful Summit Motorsports Park and we've got a great weekend of exciting racing ahead. In addition to the heads up and index categories, this event will host specialty classes such as the TREMEC Stick Shift Shootout, All-Female True Street, Ring of Fire car show competition, and more. Later today the rain-delayed final rounds for Limited Street, Factory Stock, and Coyote Stock from the last race in St. Louis will be contested as well.

>>> QUALIFYING RESULTS CAN BE FOUND HERE <<< 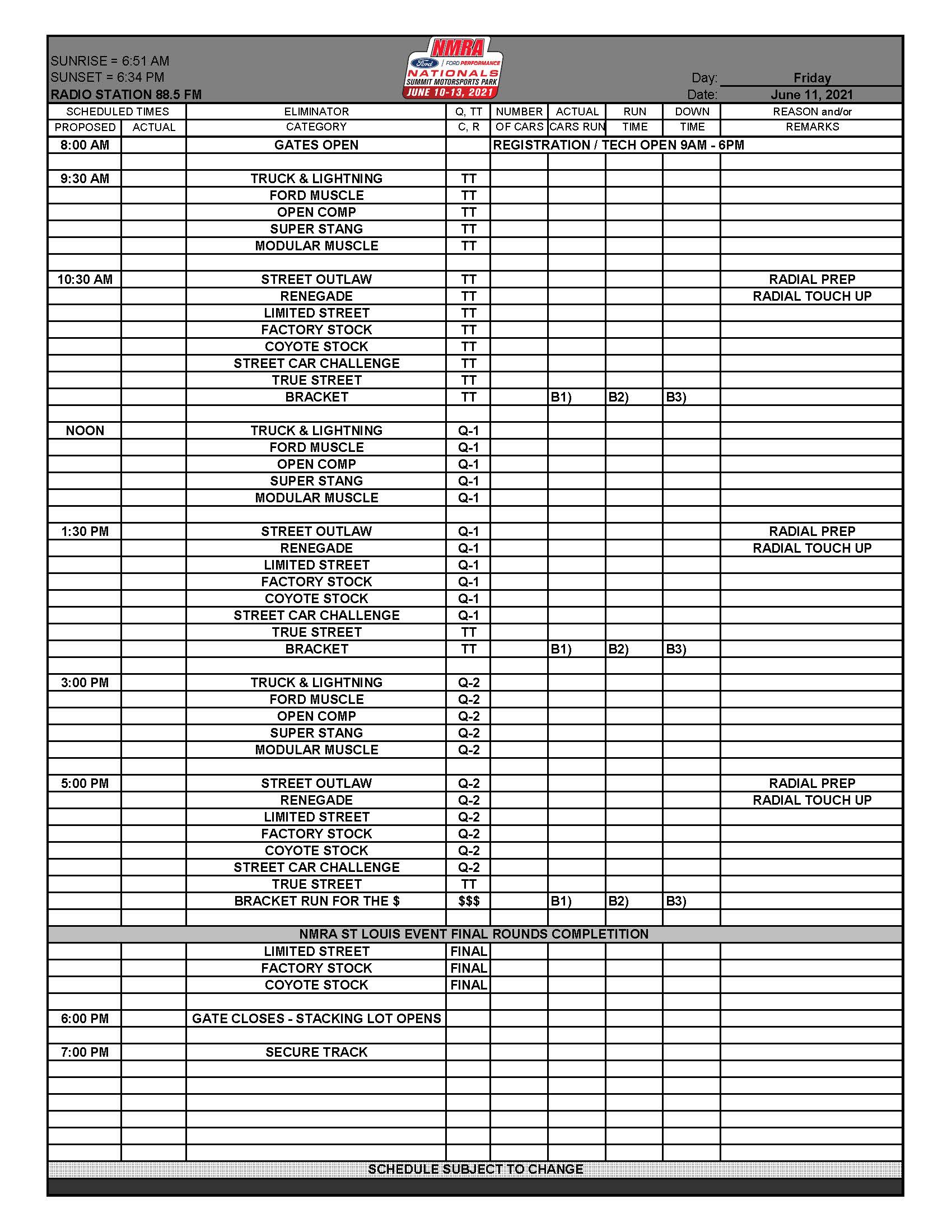 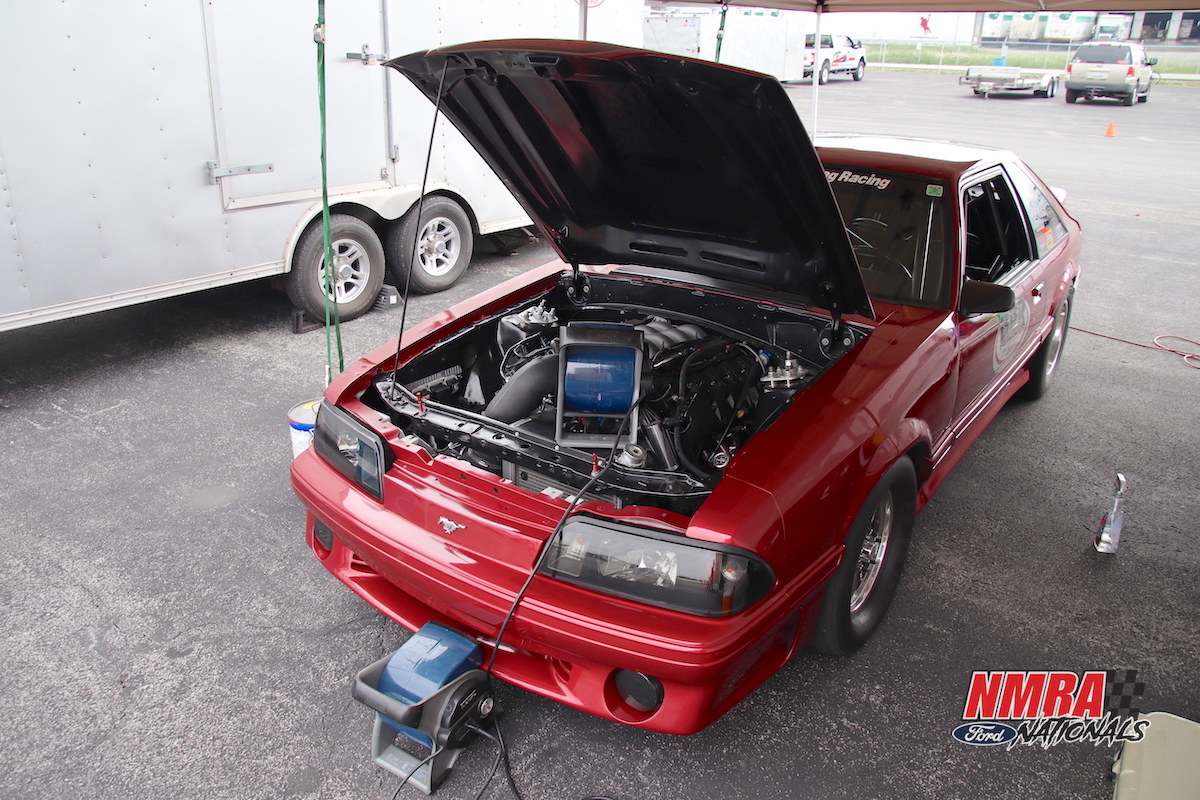 Mike Stouffer is back in Richmond Gear Factory Stock for the first time since 2019. The Director of Maintenance and Operations for Washington County Public Schools in Maryland has been busy with work, but was sure to make time to travel to this event. His Mustang, powered by a 5.0L Coyote engine backed by a G-Force G101-A transmission, is as eye-catching as ever, and he recently freshened his clutch and rear-end.Â  The driver, who also competes in NA Factory Racing at Mason Dixon Dragway in Maryland, took part in a test session at that track last weekend to get dialed in for this weekend, and while he declines to say what his car ran, he did say that he's where he needs to be for the category where Mike Bowen holds the current records with a 10.138 and 131.73 mph. 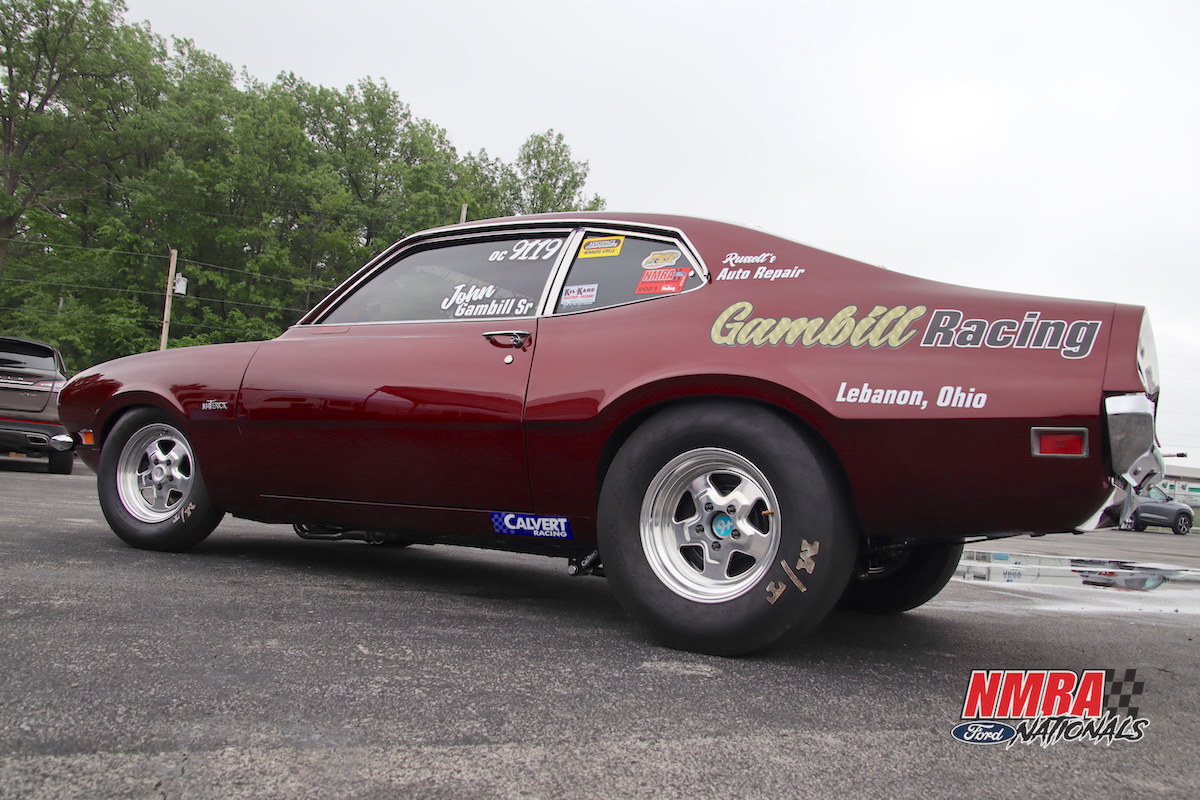 John Gambill Sr. has been racing for more than 50 years, and has owned numerous Fords. Among them is his magnificent 1969 1/2 Maverick, which is motivated by a 347 cubic-inch small-block Ford built by Prestige Motorsports and backed by a C4 transmission. It's one of six Mavericks Gambill Sr. has held the keys to, and so far, he has clocked a best of 10.51 in the car, which he has set up for ARP Open Comp. Gambill Sr.'s son, John Gambill Jr., recently began racing a Mustang in ARP Open Comp, and his other son, Joe Gambill, is their very capable crew chief. Having my sons involved this way makes racing even more enjoyable for me, said Gambill Sr. 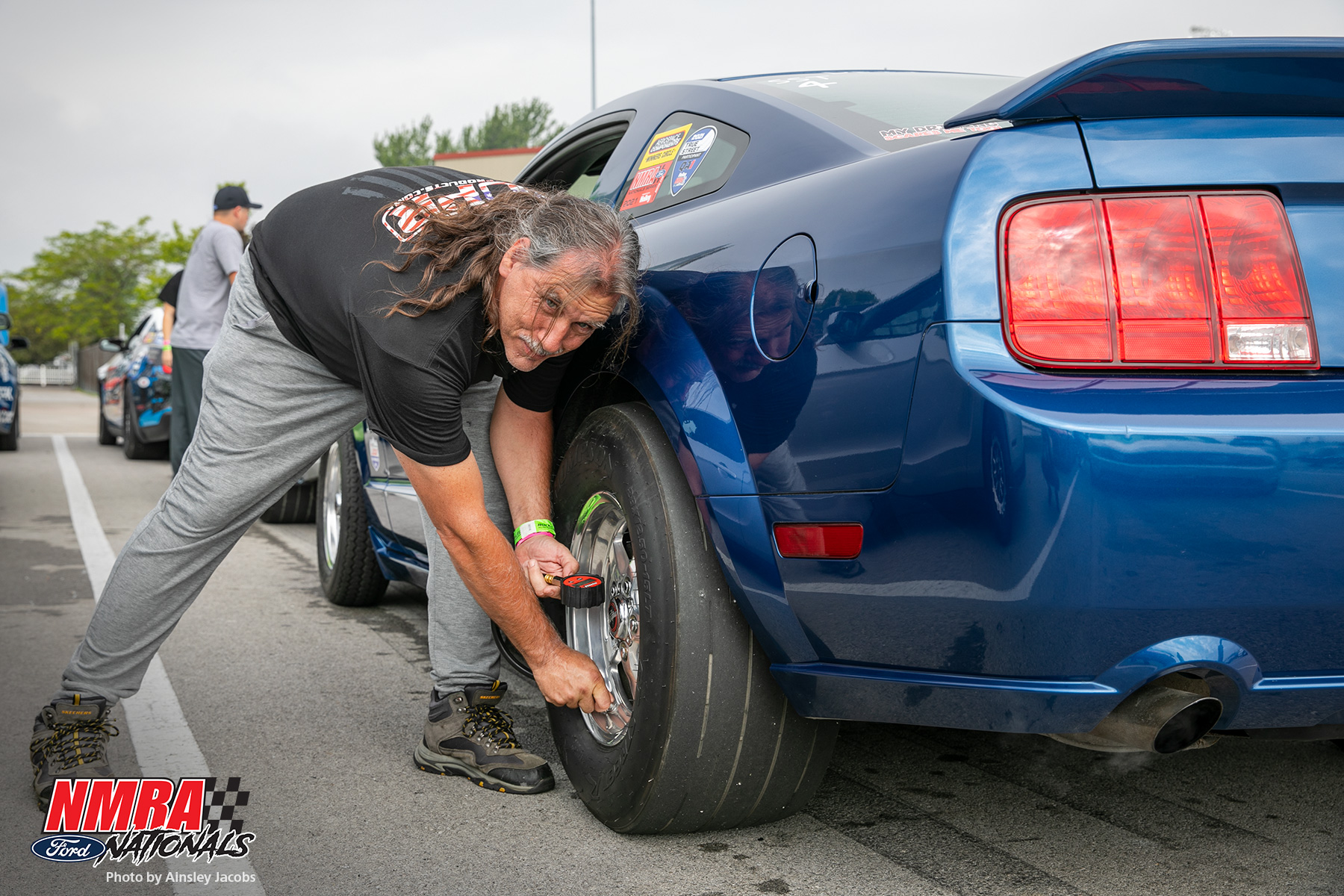 Andy Ransford was ready to run HP Tuners Super Stang first thing this morning and the man from Michigan's main goal for the weekend is to dial in his '06 Ford Mustang's consistency. Although the stock 4.6L 3-valve engine, 5R55 transmission, and 8.8 rear end have all been good to him, Ransford has had the occasional oddball run show up unexpectedly every three or four passes and he's trying to get it straightened out. He's added a few UPR Products items recently, including new upper and lower control arms, to the mix and is toying with adding new axles and a rear gear as well in the near future. 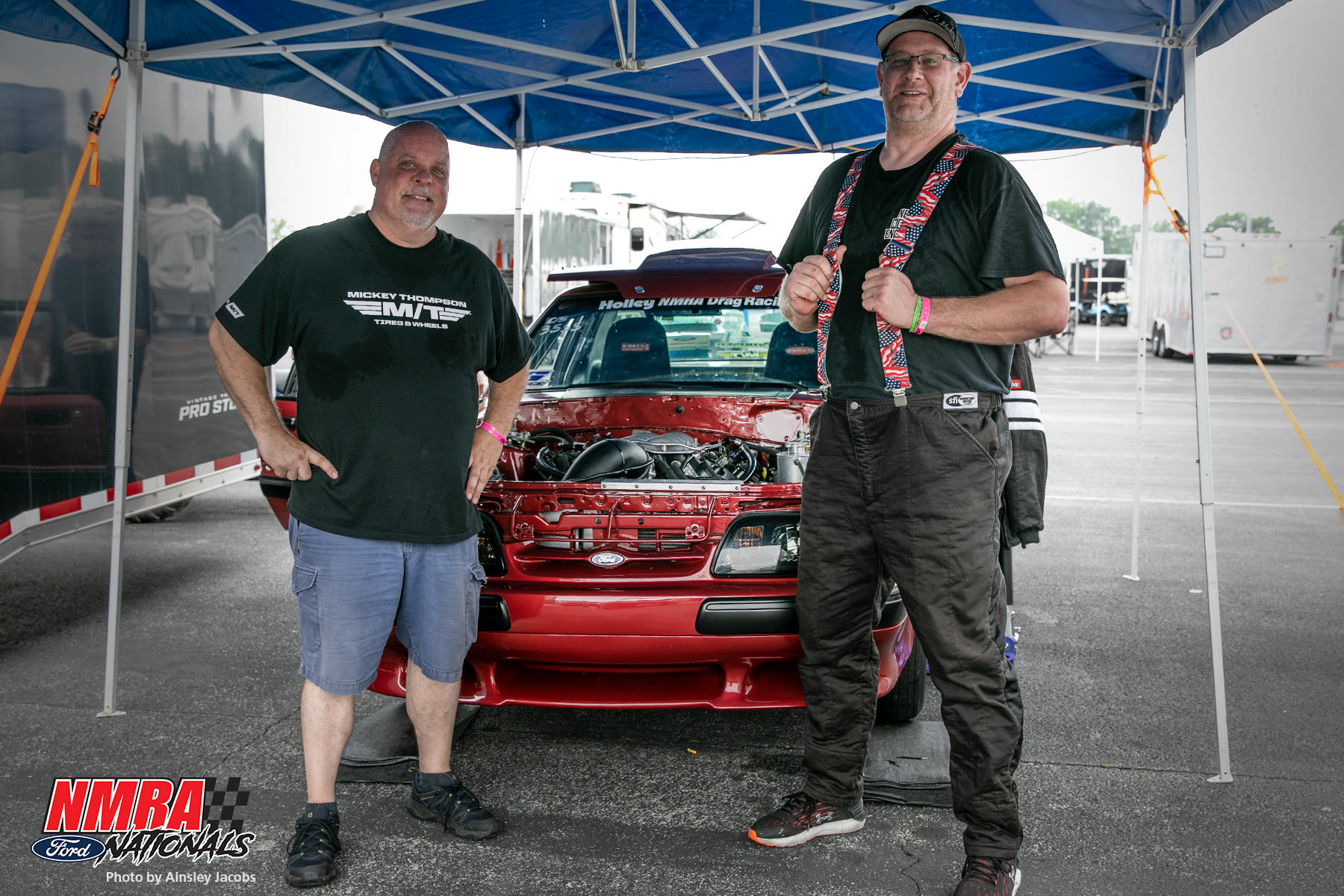 Slot machine master and G-Force Racing Transmissions Coyote Stock hot shot Andy Johnson (left) has had a tough year and hasn't been able to drive his Gen 3 Coyote-powered '87 Mustang as a result, so he's letting his friends all have a turn instead of it just sitting around on jack stands. For this race, it's Farmer John, er, Torrey Browne (right) who has the wheelman honors and a new electric water pump has been installed. Chad Stephens ran a 9.79-second hit at the last race, but the guys don't expect the same results as the weather this weekend isn't forecasted to be as good “ but they do expect to go rounds. While Ohioan John Gambill Jr. had never raced a car in his life, he ended up with a pretty mean machine last year for ARP Products Open Comp. He purchased a Mustang roller built by Brian Bell, gave it a Bennett Racing Engines small-block Ford, and by summer, he was attending the Frank Hawley Drag Racing School. After making some shakedown passes in his car, he headed to the NMRA event at Beech Bend Raceway in Kentucky last fall, where he gained valuable data. Over winter, he had his engine freshened by BES Racing Engines, backed it with a Coan Turbo 400 and had his chassis upgraded to be 7.50-certified at Chassis Doctor. Gambill Jr. has competed at every NMRA event this year, has already achieved 8.50s and has his sights set on making it to the NMRA Winner's Circle at the NMRA Ford Performance Nationals this weekend at Summit Motorsports Park. There are a lot of seasoned, excellent racers in ARP Open Comp, and the class is extremely competitive, but I love it, said Gambill Jr., whose father, John Gambill Sr., also races in ARP Open Comp and whose brother, Joe Gambill, serves as their crew chief.

At the last race in St. Louis, Stephen Barnett (left) took the number one spot after the first round of Edelbrock Renegade qualifying, but he hurt his ProCharger-supercharged 434ci Trick Flow-headed small-block Ford from BES engine in the process and was done for the weekend as a result. His new BES bullet wasn't ready in time for this weekend's event, so he and crew chief Jason Cheeseburger Waterman (right) quickly put together an alternative plan “ stuffing Waterman's 450 ci BES-built nitrous engine in the '93 Mustang. The guys got the Fox body converted to run on the bottle in just ten days, and Barnett put the first hit on the car this morning with juice on tap from Nitrous Express. He and Cheeseburger will be working to get after it as the weekend progresses so that Barnett can continue his championship hunt for the season.

Current HP Tuners Super Stang points leader and sticker connoisseur Chris Parisi (right) is doing double duty this weekend as he's racing his 2020 Ford Mustang GT and his V6 2020 Ford F-150 pickup truck, the latter in Race Pages Digital Ford Muscle. He's got a new Circle D torque converter onboard the Mustang and is loving its performance so far. Parisi also has his longtime friends, Tony Gonyon (left) and Sherry Gonyon, hanging out for the weekend. Tony has been tuning Parisi's cars for over twenty years out of his shop in Florida and is also an HP Tuners rep.

For racers needing to fill their rides, VP Racing Fuels is on site this weekend with plenty of fuel options. VP Racing is a proud supporter of both the NMRA and NMCA, and offers a complete line of other fluids including additives, lubricants, and more to keep your race car running at its finest. 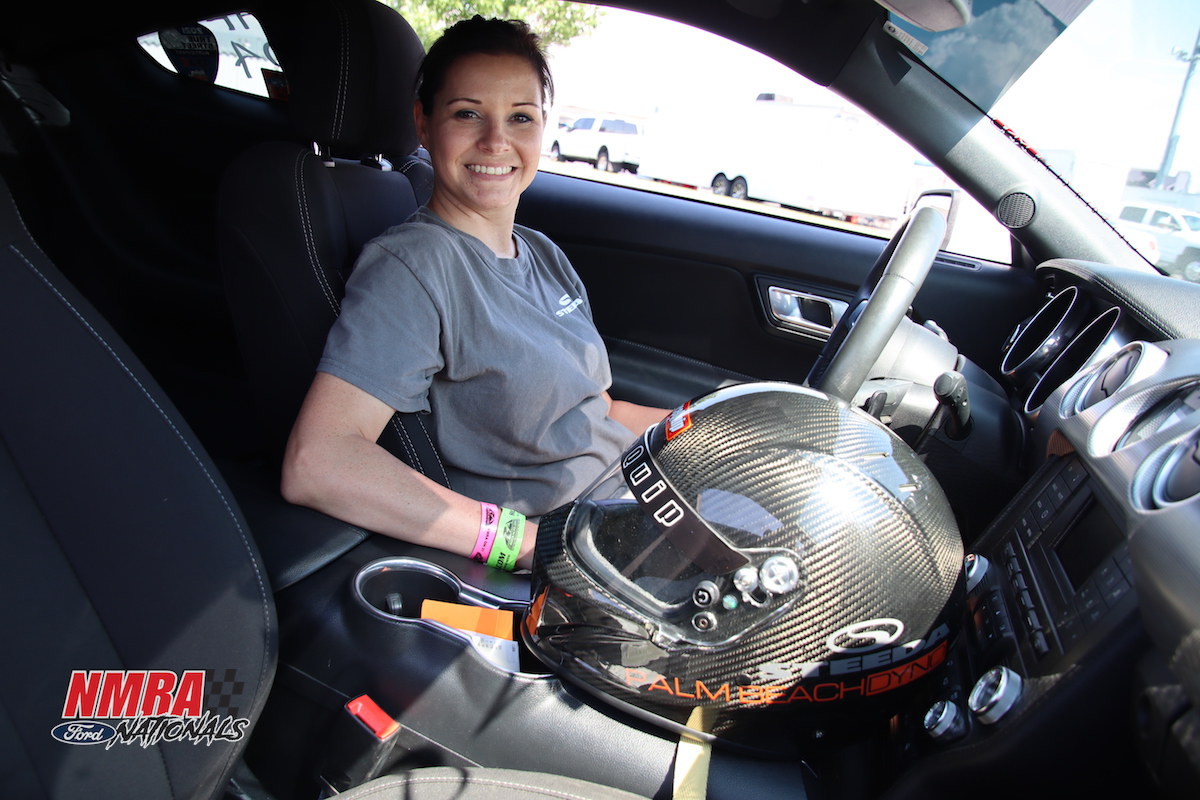 Leticia Hughes of Kentucky is a force in her 2018 Mustang. She won at two All Motor races in Kentucky and Alabama a few weeks ago, has been successful in NMRA QA1 True Street and has ripped off a best of 9.85 and 140 mph. But while testing last week, she hurt her naturally aspirated Coyote engine which has a stock bottom end, and with a lot of help from her husband and crew chief, Rick Hughes, and friends and fellow racers, she is taking on the All-Female True Street presented by Baer Brake Systems this weekend with an almost identical replacement stock bottom engine. We're working the bugs out, but so far this weekend, we've run 11.00 and 10.95, said Hughes, who relies on a stock 10R80 transmission. We'd really like to win the All-Female True Street, so we're going to try very hard." 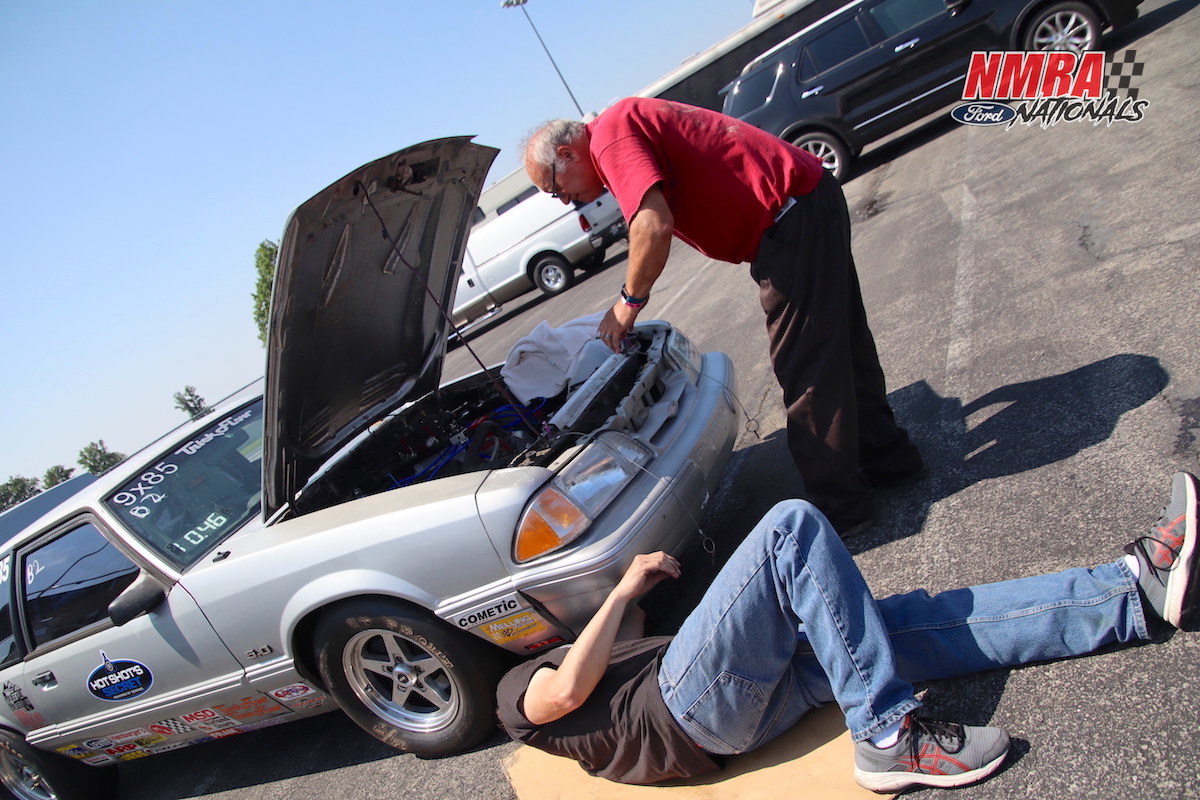 Mike Imhoff of nearby Polk, Ohio swapped an alternator just before coming to this event, and he discovered today that its belt has too much slack in it, so fellow racer Brian Foecking was helping him remedy the set-up this afternoon. Other than that, Imhoff's Mustang powered by a 408 cubic-inch Ford is ready for Bracket Mayhem's Bracket II, where he hopes to run close to the 10.40 and 10.41 he ran in time trials today.

Nicky Notch didn't get down the track during the first NMRA VP Racing Madditives Street Outlaw session with his turbocharged Fox body Mustang, but he did improve during the second session. He was on a solid run when, suddenly, it sounded like a bomb went off and he knew something was seriously wrong. Unfortunately, the car broke its gearset and put a new internal inspection window where there definitely shouldn't be one. Nicky and teammate Eric Bardekoff do have a spare gearset and a whole center section, so the guys are going to get things cleaned up, assess the damage, and hopefully be ready to rock for tomorrow.

Matthew Keiser has been running his '68 Mustang for nearly twenty years, but he's had a tough time with it lately. He brought it out to Norwalk two years ago with a new FE engine combination to run in the Cobra Jet Showdown and ran in the high 9-second zone while doing some monster wheelstands. He worked on suspension and chassis after that to get it set up better, then broke a rocker arm in his engine at the one race he attended in 2020. Due to parts delays, he had to sit out the rest of the season and spent the winter rebuilding with new valve springs, different cam, and more. This weekend marks his first time back since the changes, and his car is performing well. Keiser is currently qualified third in Race Pages Digital Ford Muscle with a 10.277-second hit on his 10.25 index to account for the wet air that rolled in. 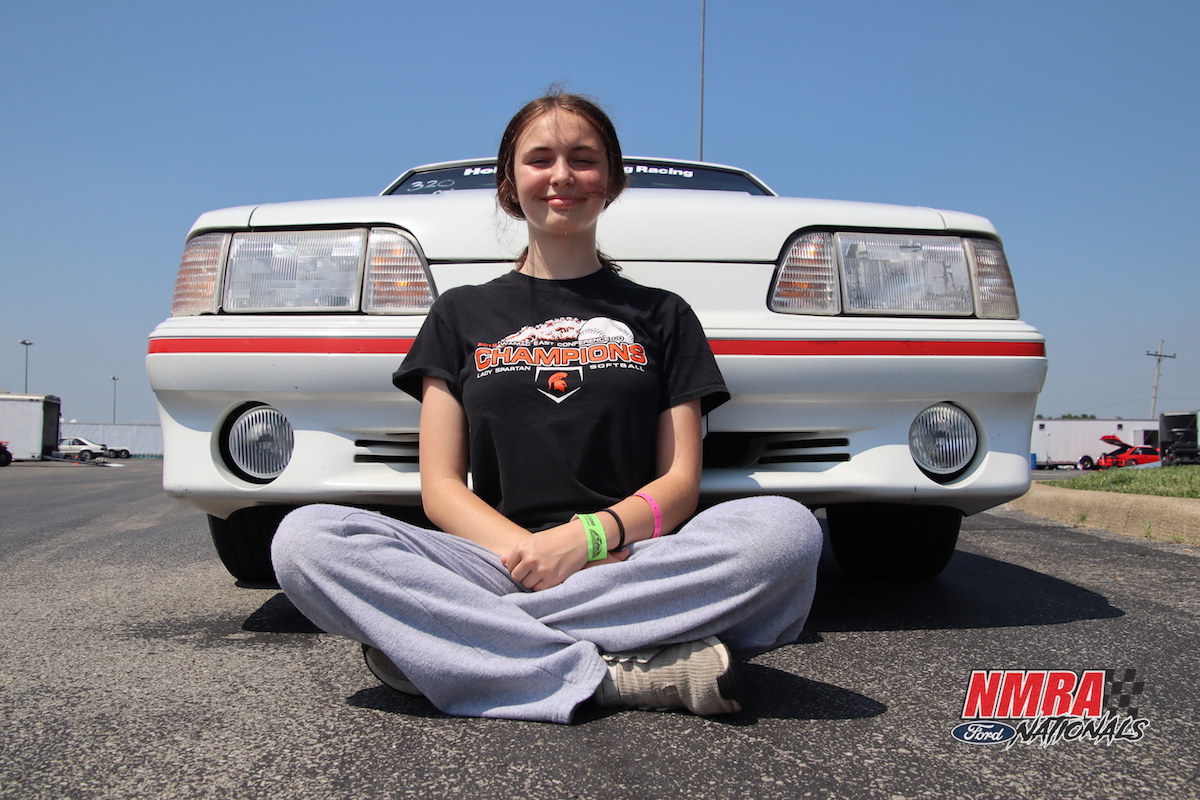 Abby Kluesner was just 12 years old when she began driving her Mustang around the yard of her family's home in Iowa, and when she turned 16 last December, she was finally able to drive the car with a stock small-block Ford and stock T-5 manual transmission on the street. She promptly entered the NHRA Junior Street category at Tri-State Dragway in Iowa, followed by QA1 True Street at the NMRA/NMCA Super Bowl of Street-Legal Drag Racing presented by HPJ Performance in May at World Wide Technology Raceway in Illinois, and she's officially hooked. As a result, she's back behind the wheel of her 15-second street/strip car, this time for the All-Female True Street presented by Baer Brake Systems this weekend at Summit Motorsports Park. Helping her along the way is her very proud father, Paul Kluesner.