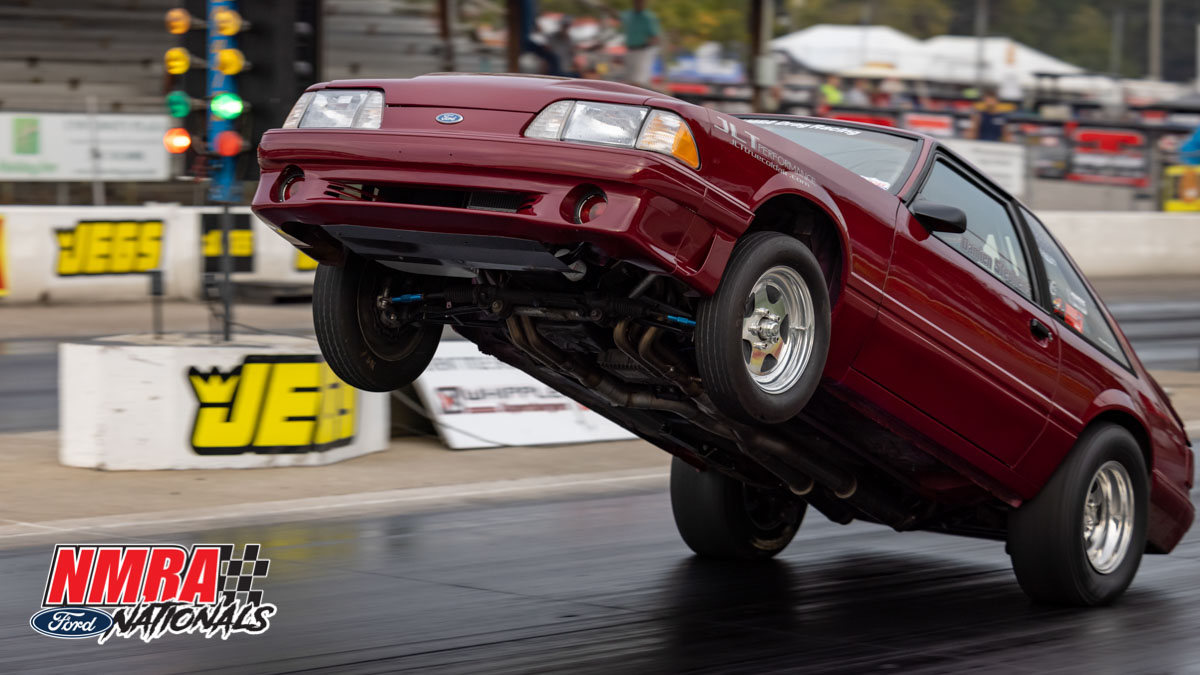 Today, the action revs up at the Whipple Superchargers NMRA All-Ford World Finals Presented By Competition Clutch & Holley Intergalactic Ford Festival. With a weather-hastened schedule this weekend, racers will make test hits and qualifying runs in preparation for tomorrow's eliminations. Off the drag strip, a whole host of Ford Fest activities from drifting and off-roading to a cruise and a dyno challenge ensures there won't be a dull moment on the Beech Bend Raceway property today.

ReminderThe NMRA Drag Racing schedule has changed to a Friday/Saturday setup with 3 qualifiers on Friday and Eliminations will begin on Saturday in an attempt to beat the impending rain. All Championship categories must be tech'd in before the gate closes on Friday night, QA1 True Street and the MSD Ignition Bracket Open can tech-in on Saturday. There will be a FULL Ford Fest activity schedule on Sundayrain or shine with autocross, drifting, and off-road action. QUALIFYING RESULTS HERE 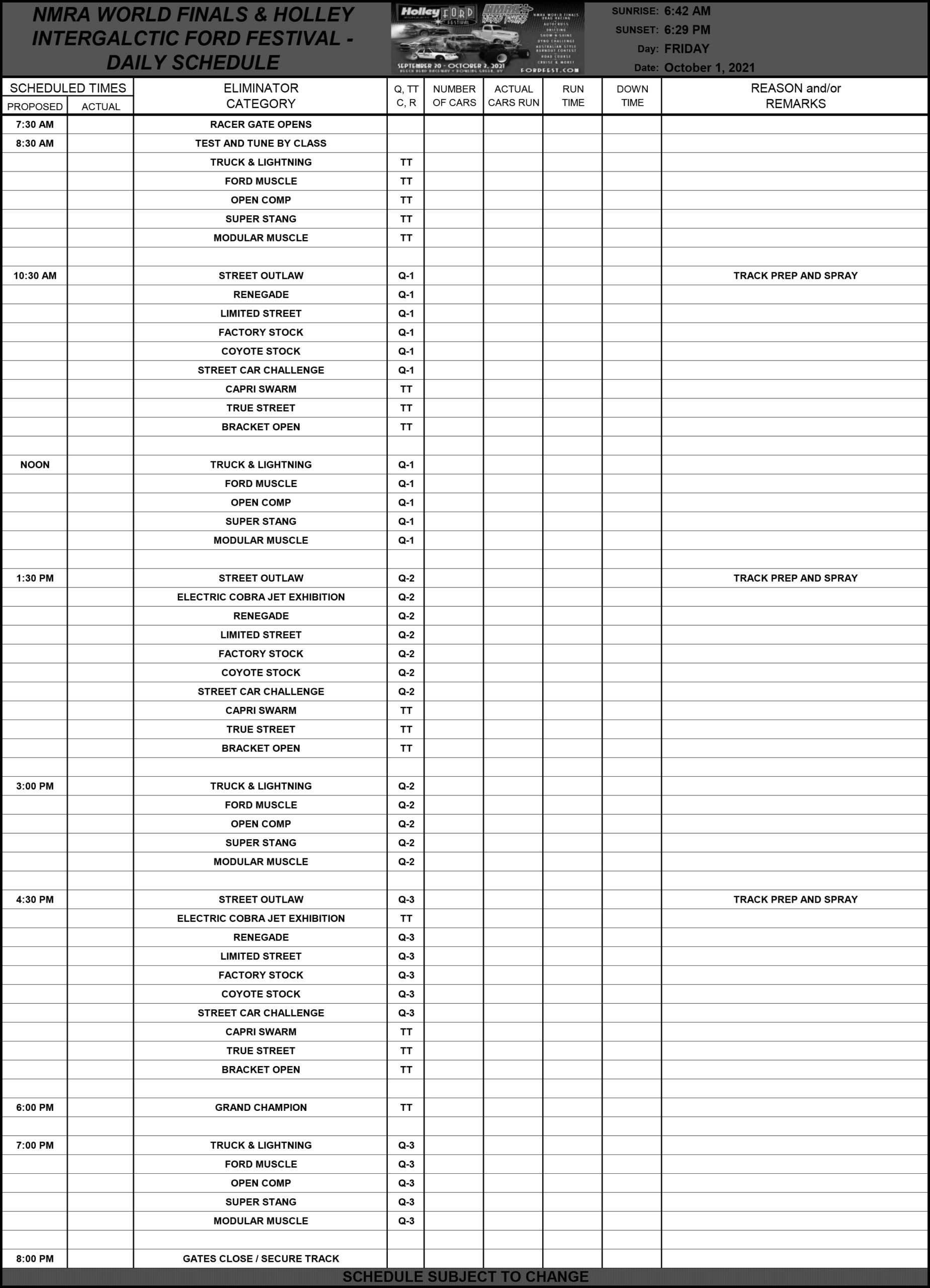 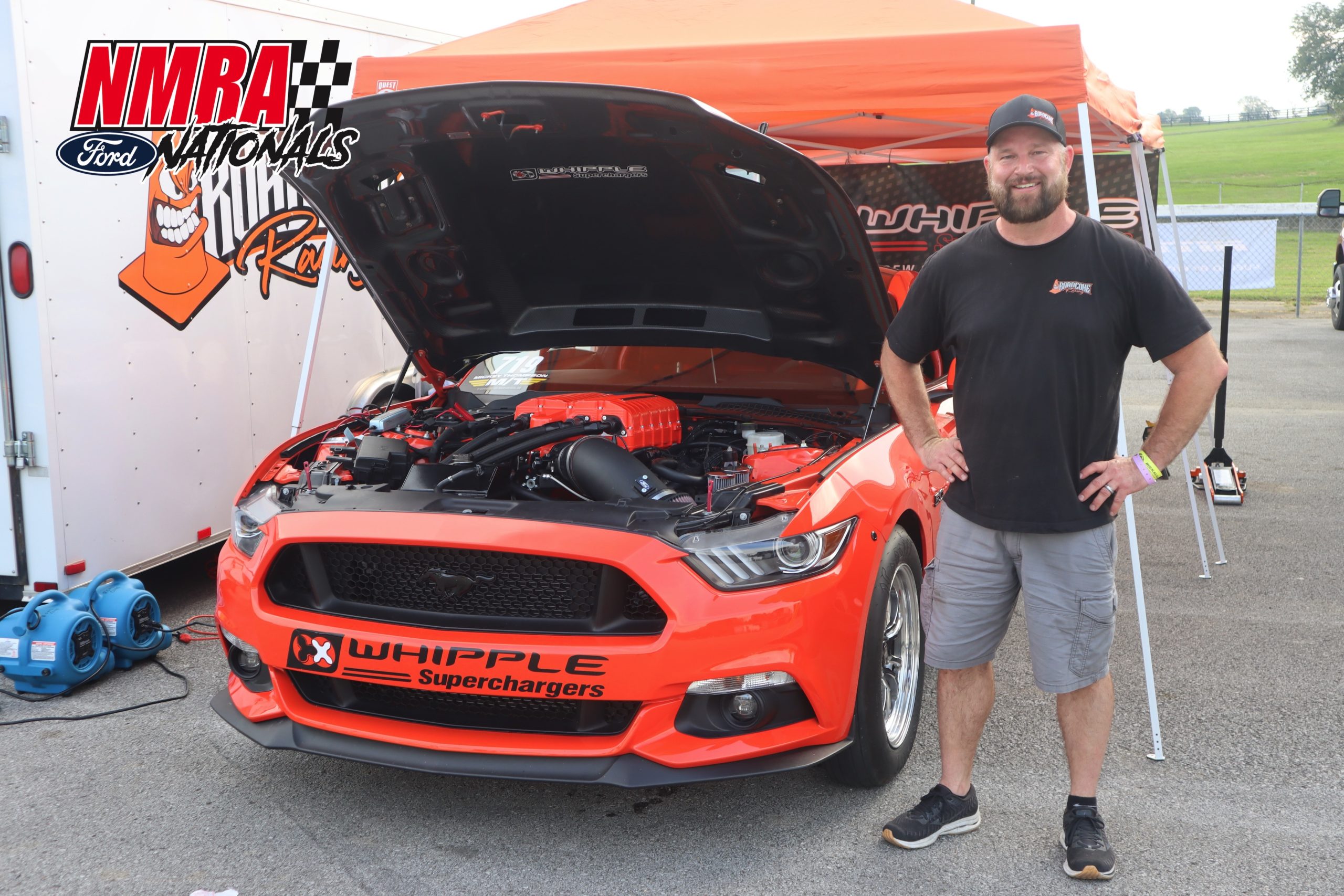 It's not too often that you debut a revamped combo at the last race of the season and click off a personal-best run on your first pass. That's just how things added up for Terry Eshman and his Competition Orange 2016 Mustang, which he dubbed RoadCone in deference to its paint. A 3,900-pound street car with all the creature comforts, including navigation and A/C, it is propelled by a Bischoff-built, Eric Holiday-tuned 327-cube Coyote boosted by a 3.8-liter Whipple. Eshman was all smiles recounting the 8.19-second, 180-mph pass he ran on the new combo's maiden voyage in testing. He hopes to carry that momentum to success in the Mickey Thompson Street Car Challenge class this weekend. 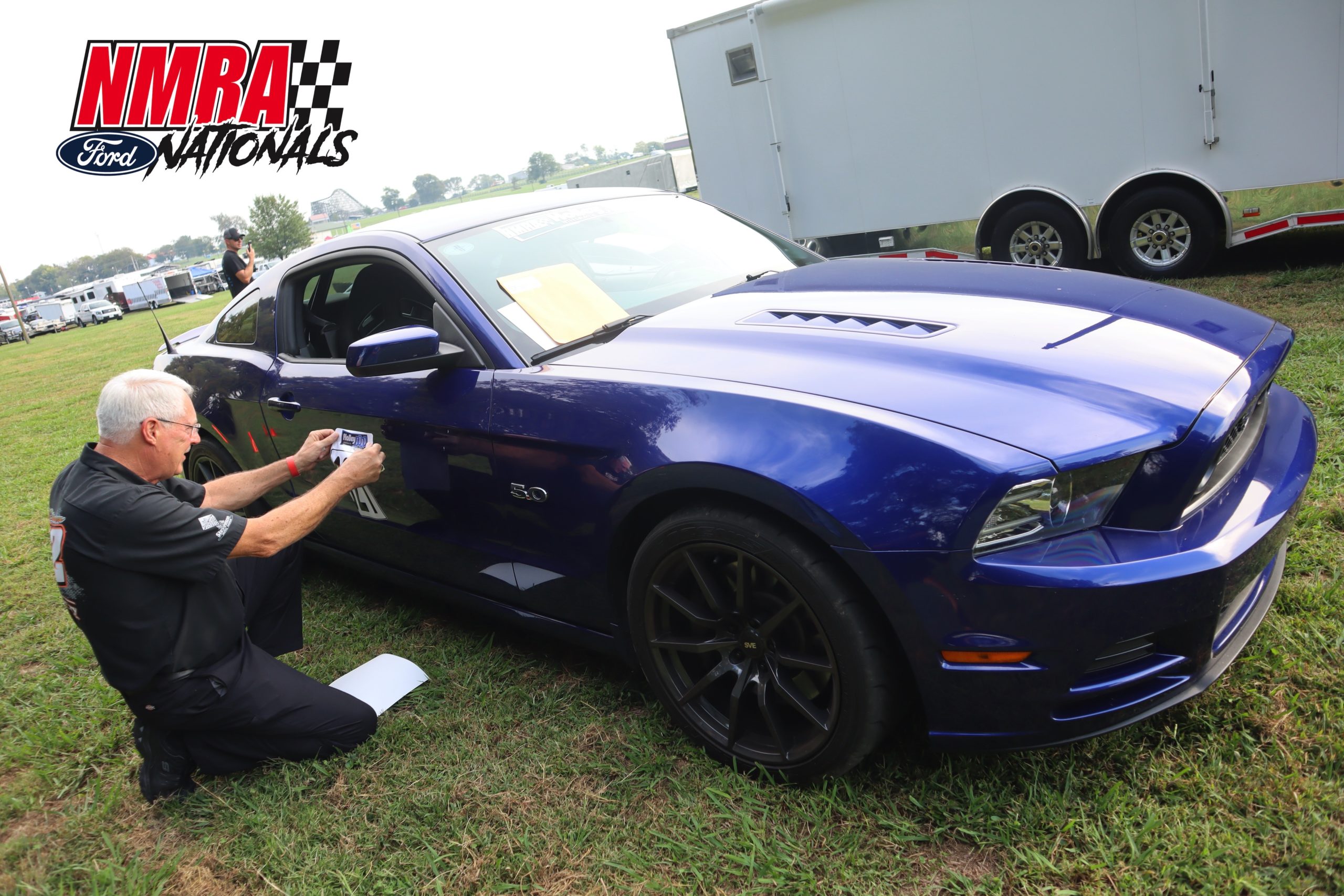 Inspired by a few other members of the Northern Mustang Corral Club, Bill Stevenson made the trip down from Illinois to race this car and have some fun. The car in question is a 2014 Mustang GT fitted with a ROUSH supercharger that he is piloting in the Holley Grand Champion class, which includes autocross, drag racing, and 3S competitions. Piloting his Brembo- and Recaro-equipped auto car should definitely be a good time. 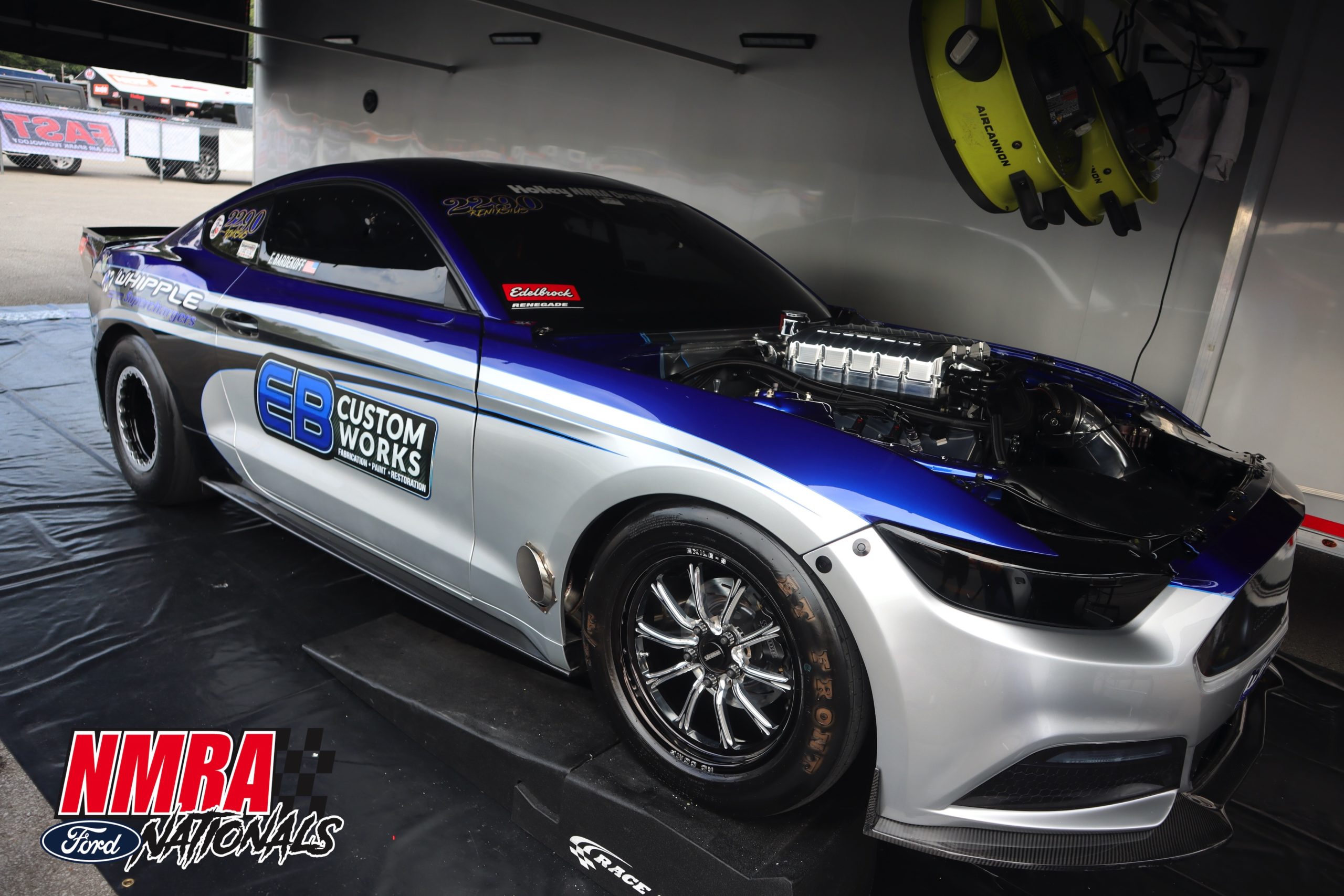 When we asked Eric Bardekoff what he did to prep his Whipple-boosted Mustang for a run at the Edelbrock Renegade championship, he joked that he waxed it, scraped off the rubber, and shined up the tires. That stuff is true, but the real answer is standard maintenance and endless tweaking. I just want to win the race, he told us. The championship would be a bonus. To achieve that goal, he plans to stick to the basics and run his own race.Â 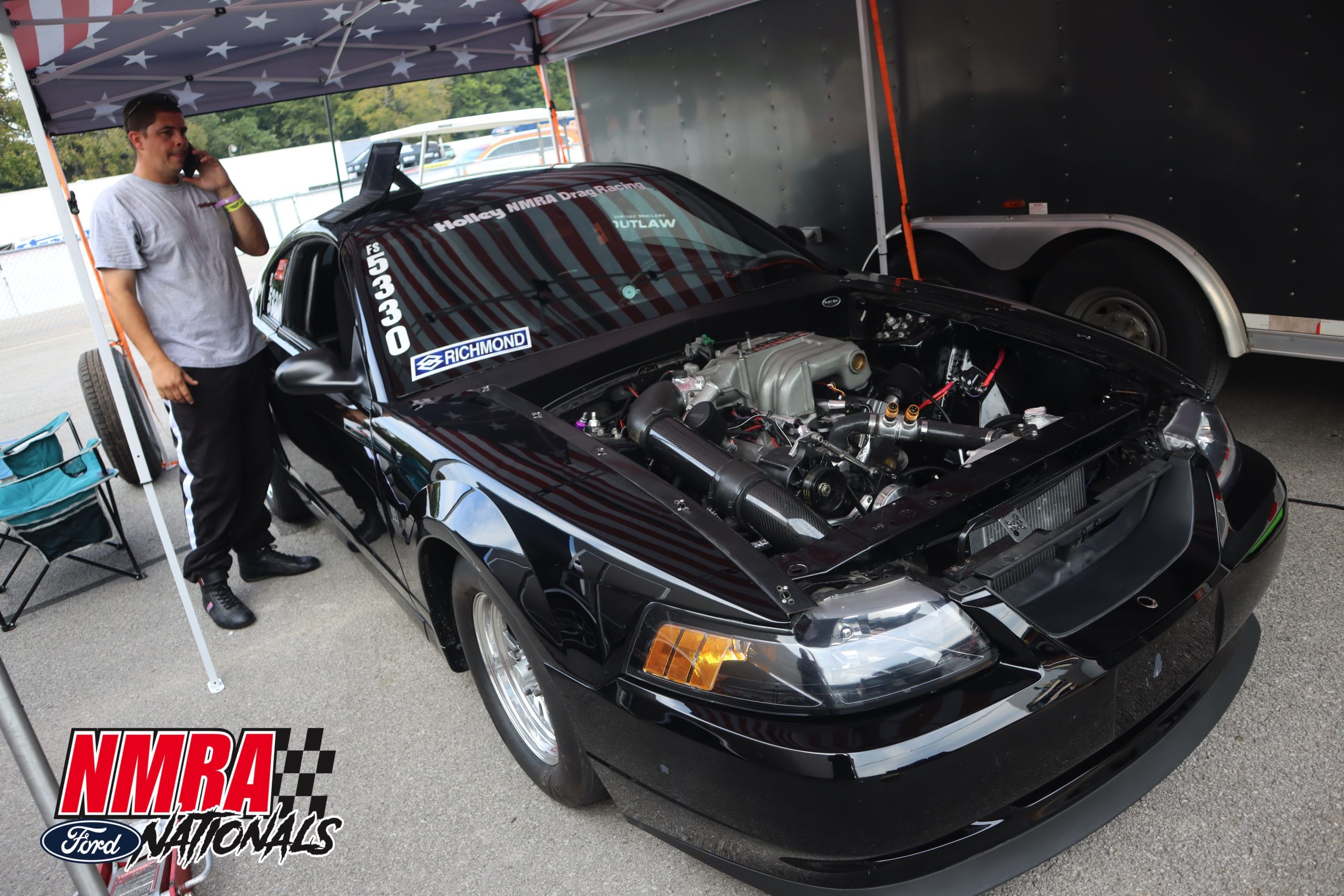 Matt Williams returns to competition this weekend after an unfortunate incident during the 2020 season opener. This time he is piloting Louis Sylvester's former New Edge machine in Richmond Gear Factory Stock. It's a return to the class for him, and he is kicking it old-school with a Zap Racing-built 306 small-block. Controlled by a Holley EFI system, the pushrod powerplant sports GT-40P heads, a Cobra intake, and a COMP cam. On just his second pass, Williams rowed the gears in the G-Force G101 transmission to a 10.52-second pass. It's my first time behind the wheel in a year and a half, he said. I am happy to be where we are at. 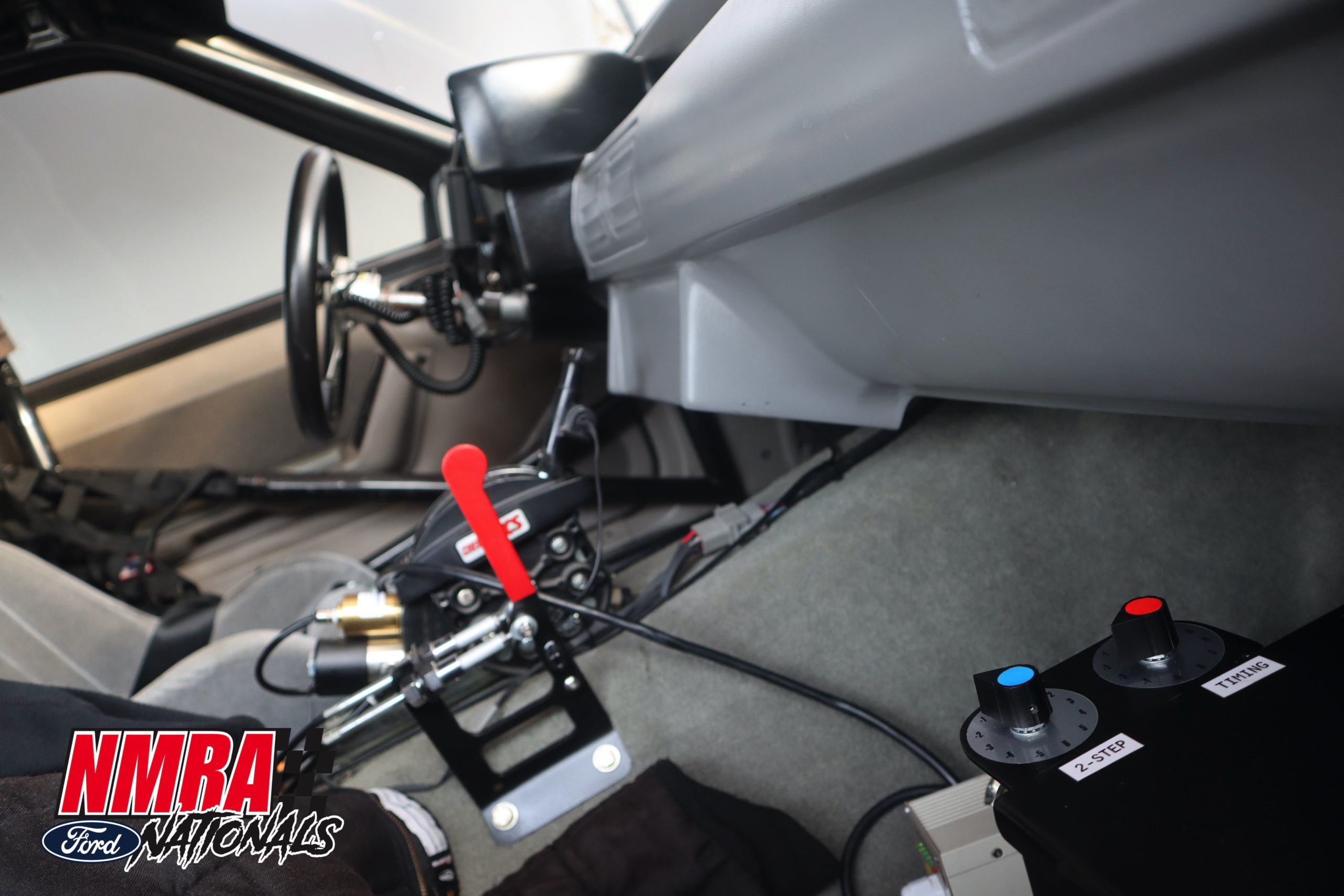 Edelbrock Renegade pilot Bob Cook is looking to find the right recipe to get his car to hook without hanging the front tires too high. He switched back to a three-speed transmission and played with the gearing. Now he is working on power management, and to that end, he added dials in the cockpit that allow his crew chief to make last-second two-step and timing adjustments in the lane. Since he is not in the championship chase this weekend, Cook will use this weekend to set the stage for next season with what he learns.Â 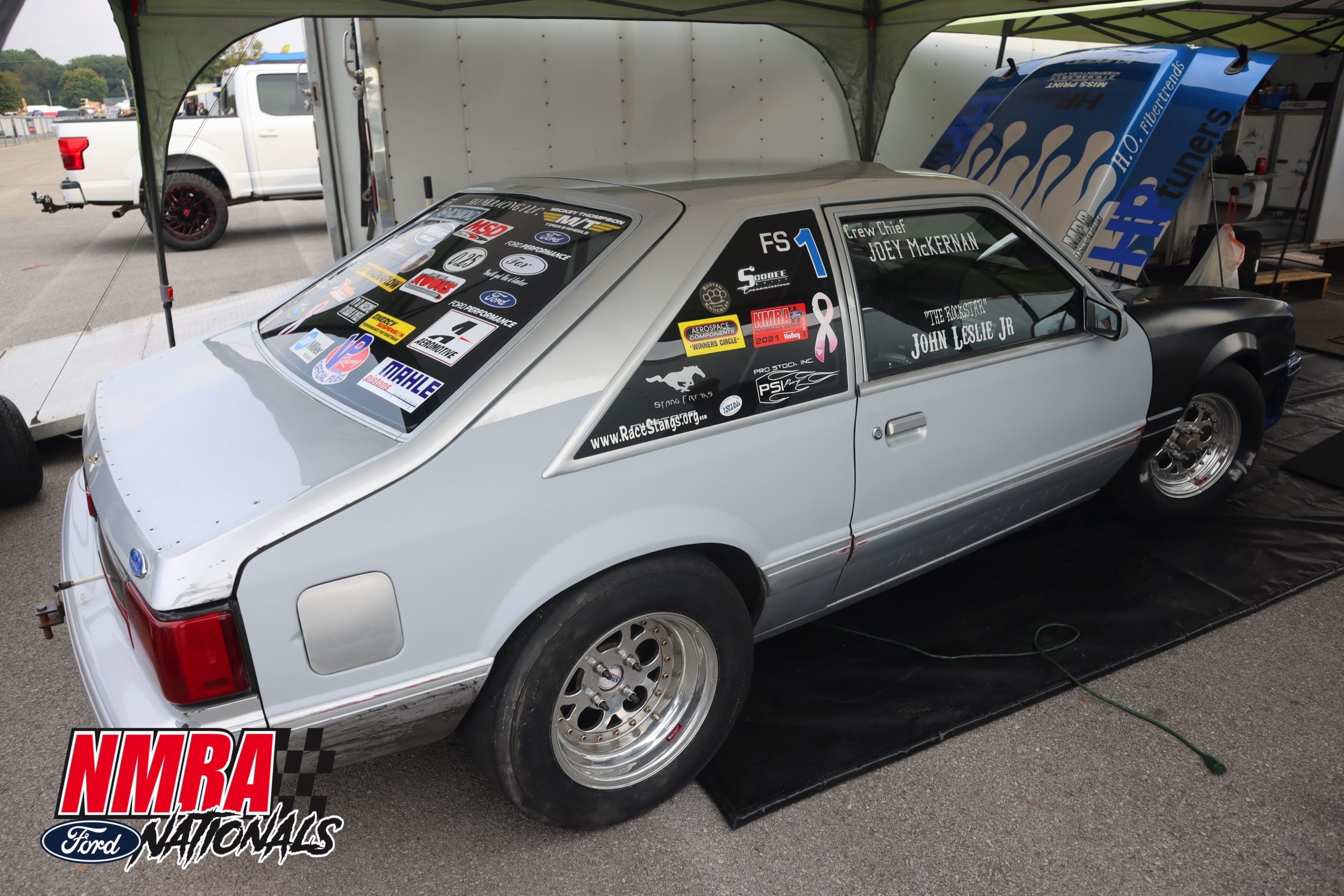 After a clash with the wall, John Leslie Jr. didn't have time to get his ride painted and pretty for the Whipple Superchargers NMRA All-Ford World Finals Presented By Competition Clutch & Holley Intergalactic Ford Festival. He was, however, pleased that the car went straight in testing, but was looking for another 10th in Richmond Gear Factory Stock qualifying. He plans to give it his best shot this weekend, before refreshing the car in the off-season and coming out swinging at the 2022 season opener in Bradenton.Â 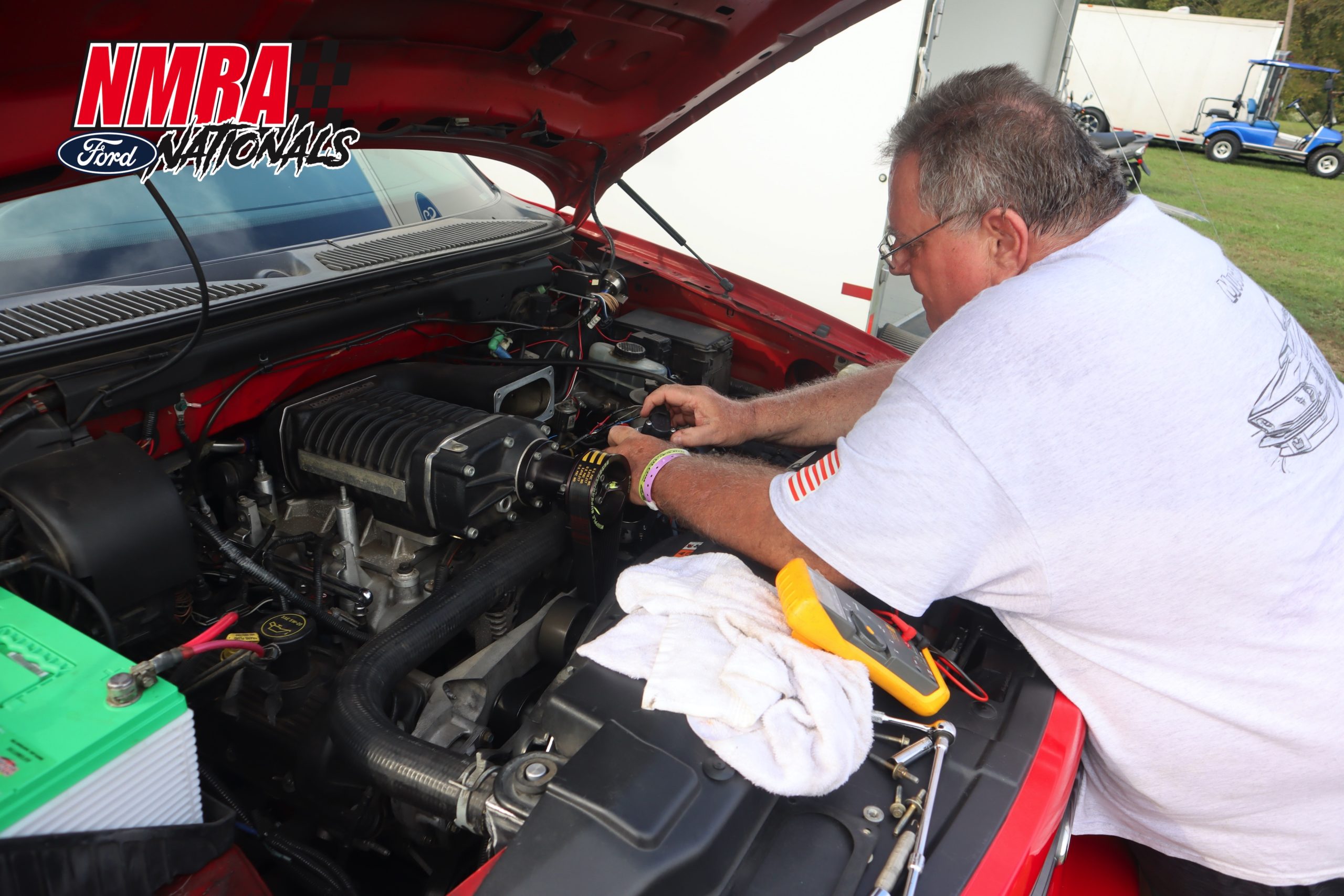 James Steamer ran into a throttle-position sensor issue at the Super Bowl race back in May. He thought a new sensor solved the issue, but it reared its head again at Beech Bend Raceway Park. He said the symptoms seemed to be getting worse, but he was chasing the wiring to solve the issue so that he can qualify his pickup to its full potential in Detroit Locker Truck & Lightning. 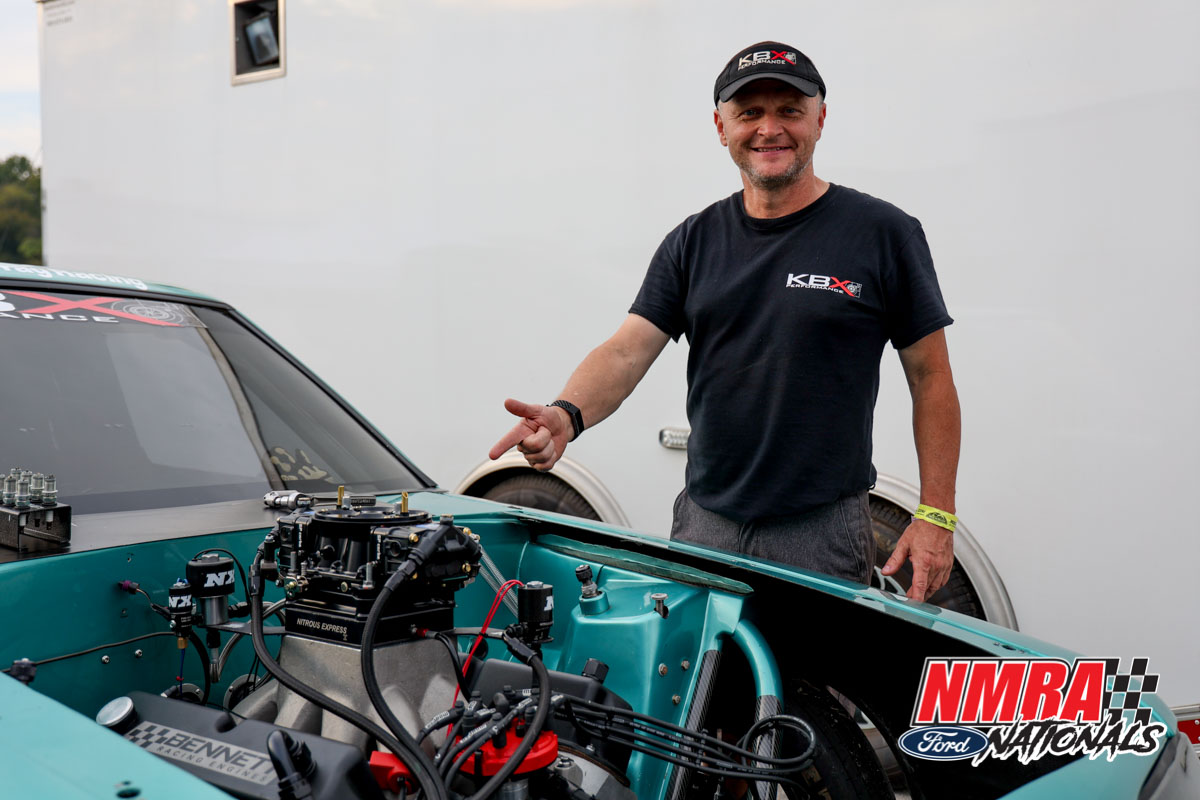 Veteran radial racer John Kolivas hasn't made a hit in a race car for about 8 years, as he's largely focused on his business, KBX Performance. He purchased this Mustang coupe recently to test engine combinations for the DXP Street class, and he's here this weekend testing out this Bennett Racing 440ci/Nitrous Express combination in Edelbrock Renegade. Both the nitrous and the carburetor are something new for KBX, which largely focuses on turbocharged/supercharged EFI applications. The engine, equipped with Trick Flow High Port heads and an SP Carburetor, made 900 horsepower naturally aspirated. The Mustang has been 4.87 in DXP trim and Kolivas clicked off a 4.72 yesterday with the NX system. Shawn Pevlor, will be once again taking over driving duties, and the team is hoping to whittle the ET down to 4.50s. 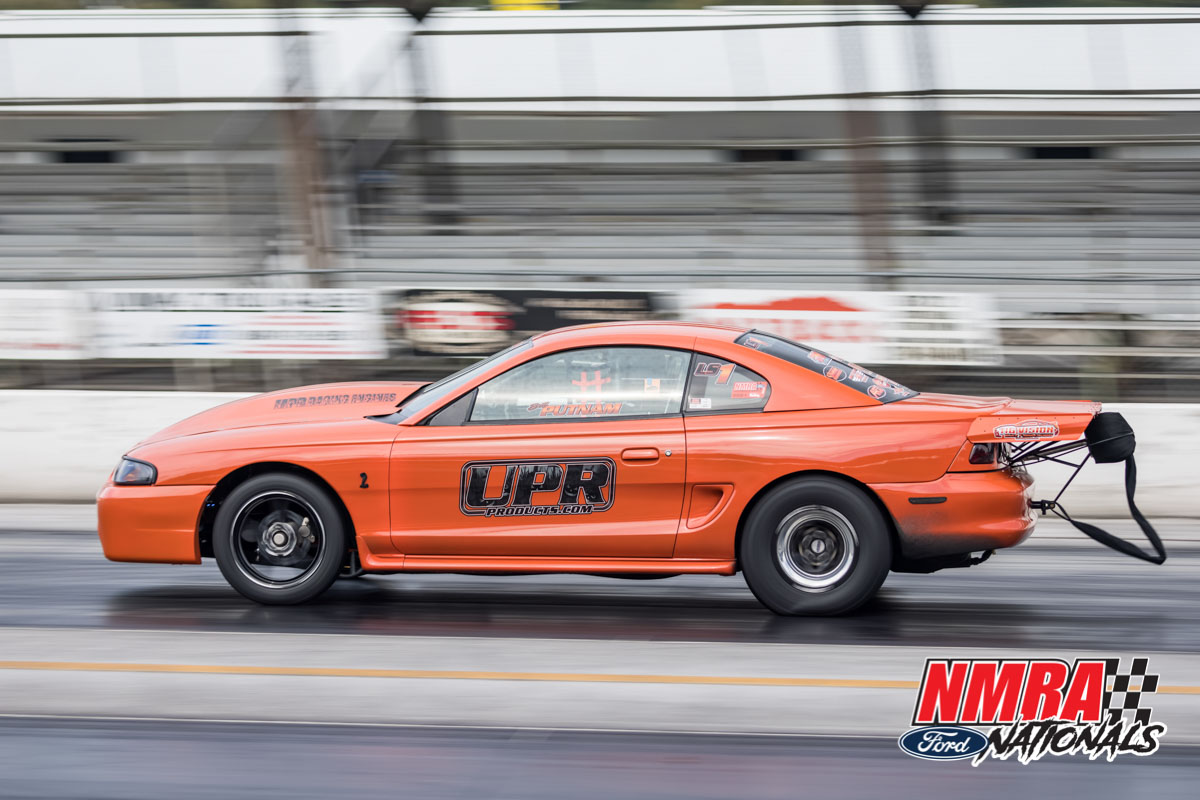 2020 JDM Engineering Limited Street champion Bill Putnam has been steadfast in defending his championship this season, but a late charge by Samantha Moore poses a considerable threat. Since the last race in Norwalk, Ohio, Putnam and his crew chief, Sharad Raldiris, have been testing and recently converted the Mustang from C16 to C85, looking for an even advantage to maintain his points lead through this weekend. 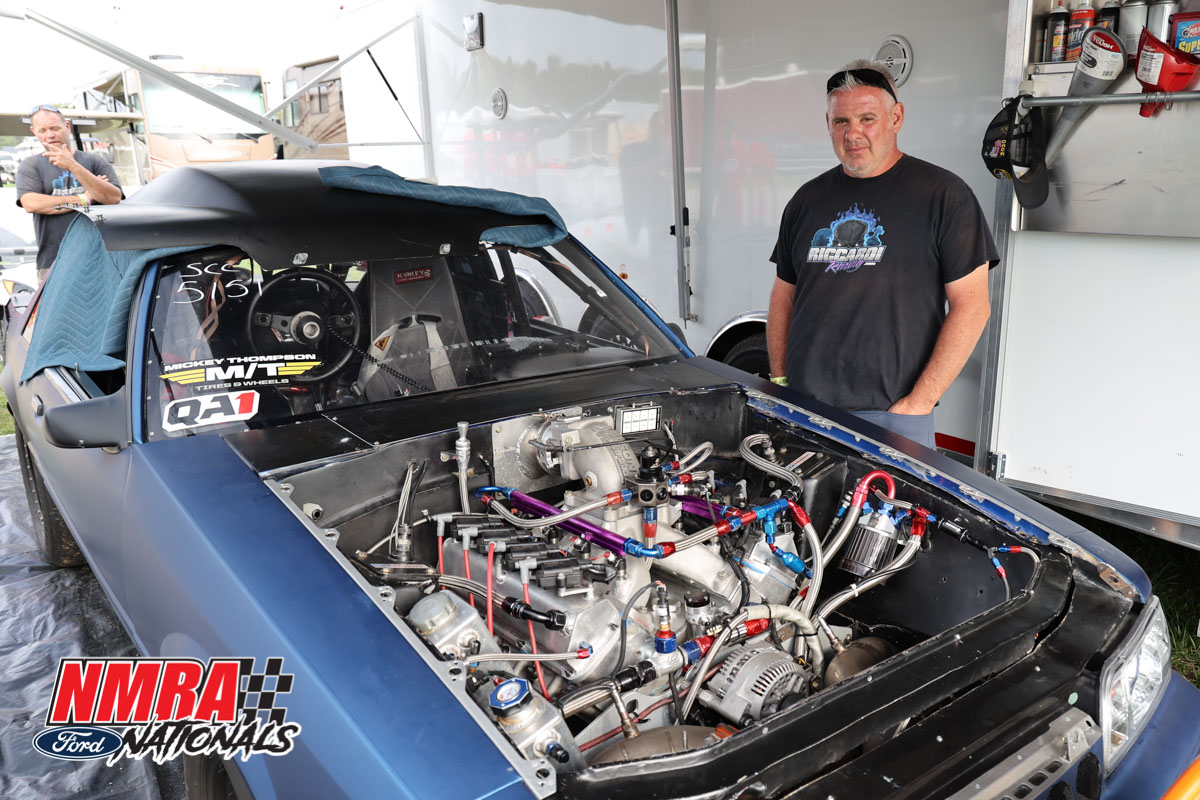 Reigning King of the Street champion Donato Sierchio is here this weekend competing in Mickey Thompson Street Car Challenge with his twin-turbo Mustang. After competing at the Spring Break Shootout in March, Sierchio found out his iron block was cracked, and swapped in a new aluminum piece that saved his 90 lbs. He's already clicked off a number of mid-7-second elapsed times, and is expecting low 7s before the weekend is out. 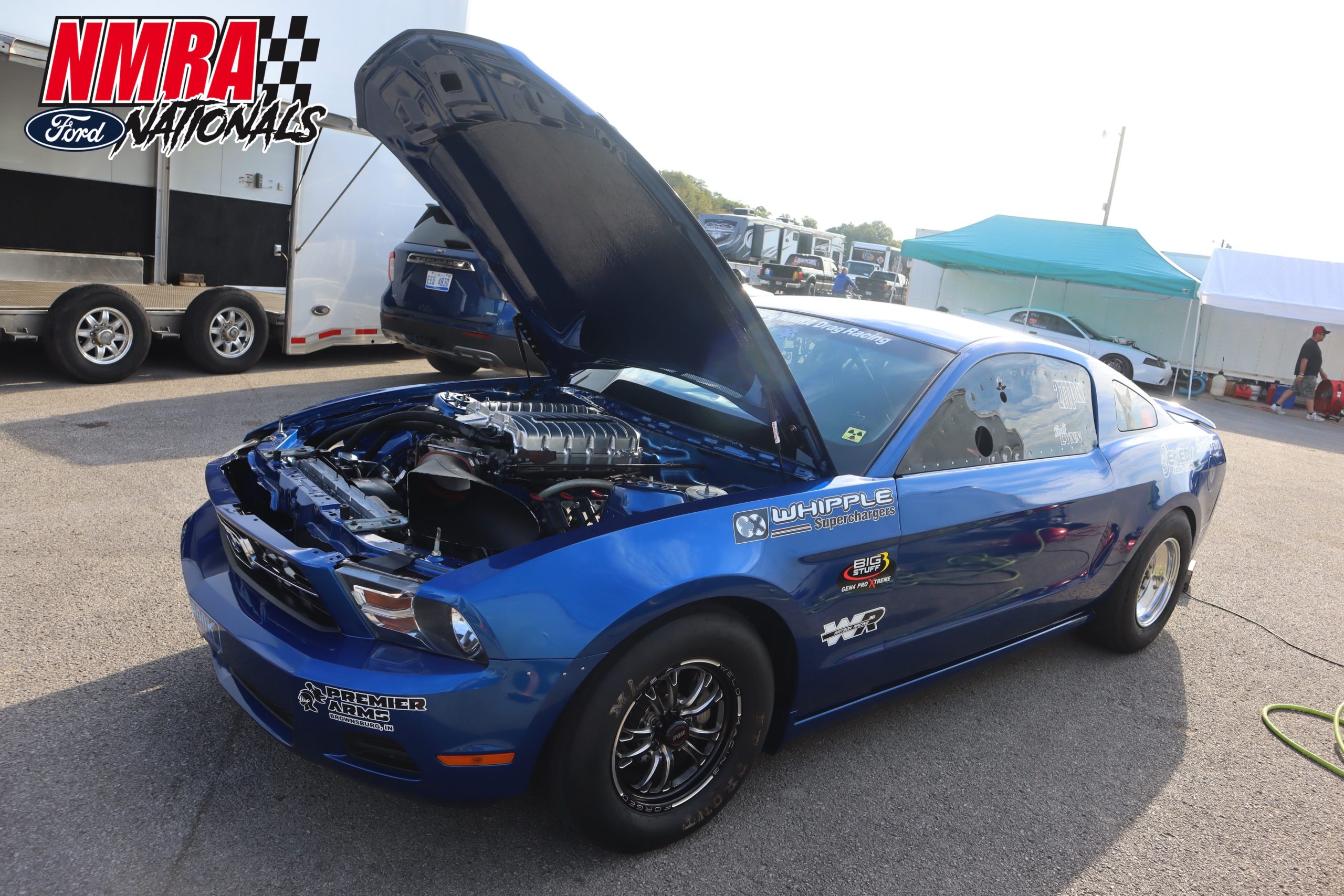 When Joe Cram is smiling, there is a good chance that Becki Cram's Edelbrock Renegade car is running well. After swapping in a new torque converter from ProTorque, Joe says the early returns look promising and they just need to put the Whipple-boosted Coyote power to it. He says it's the first time in seven years that they purchased a converter and it delivered on its promised performance, which was why he was smiling.Â 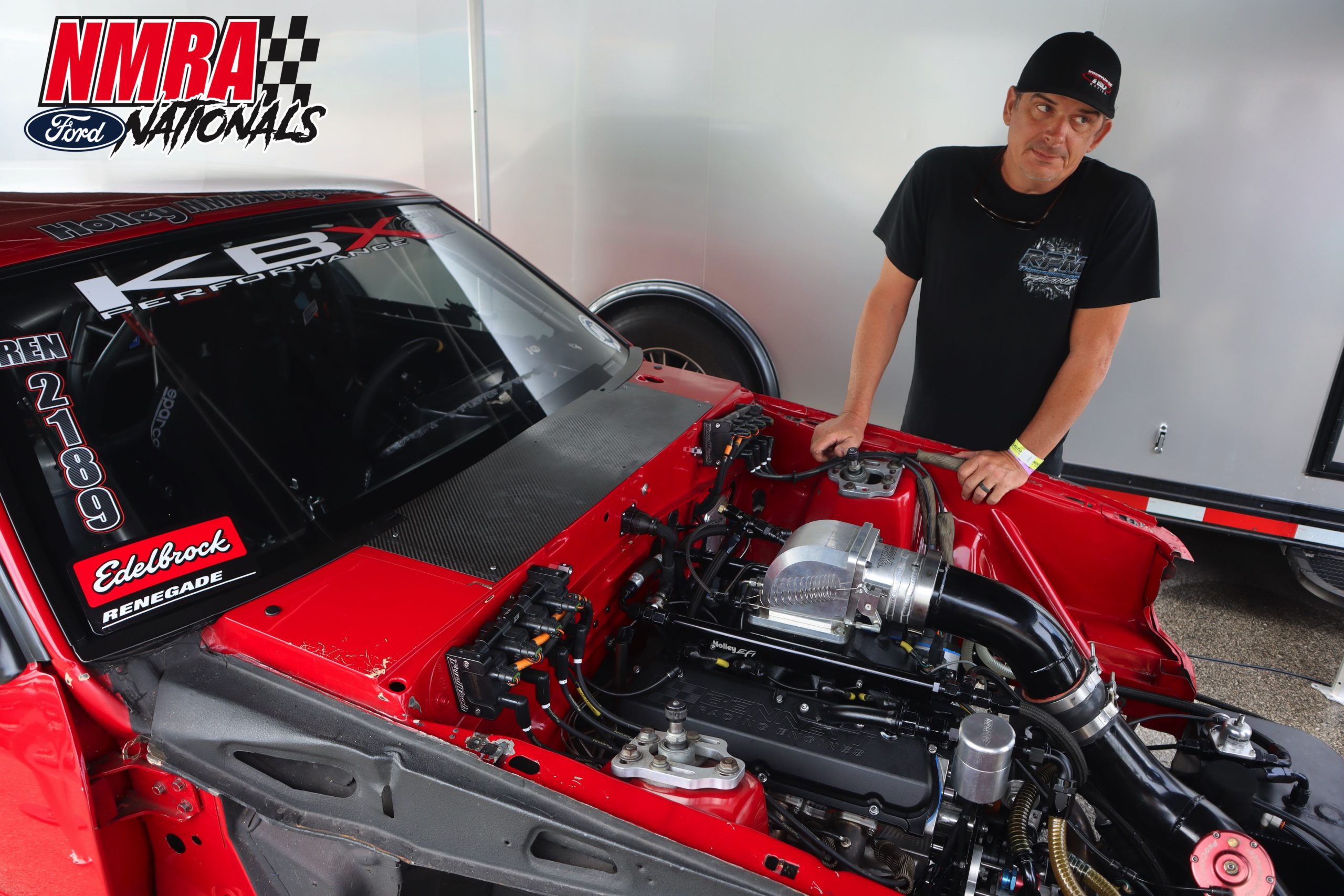 Joel Greathouse is hoping a little home-cooking will help him triumph in a tight race for the championship in Edelbrock Renegade. With both teams delivering a maximum effort, Greathouse's goal is to stay sane about it on our side and do our thing. Early on that seems to be working he clicked off a clean pass in testing, resulting in a 4.55-second ET, which definitely showed promise.Â 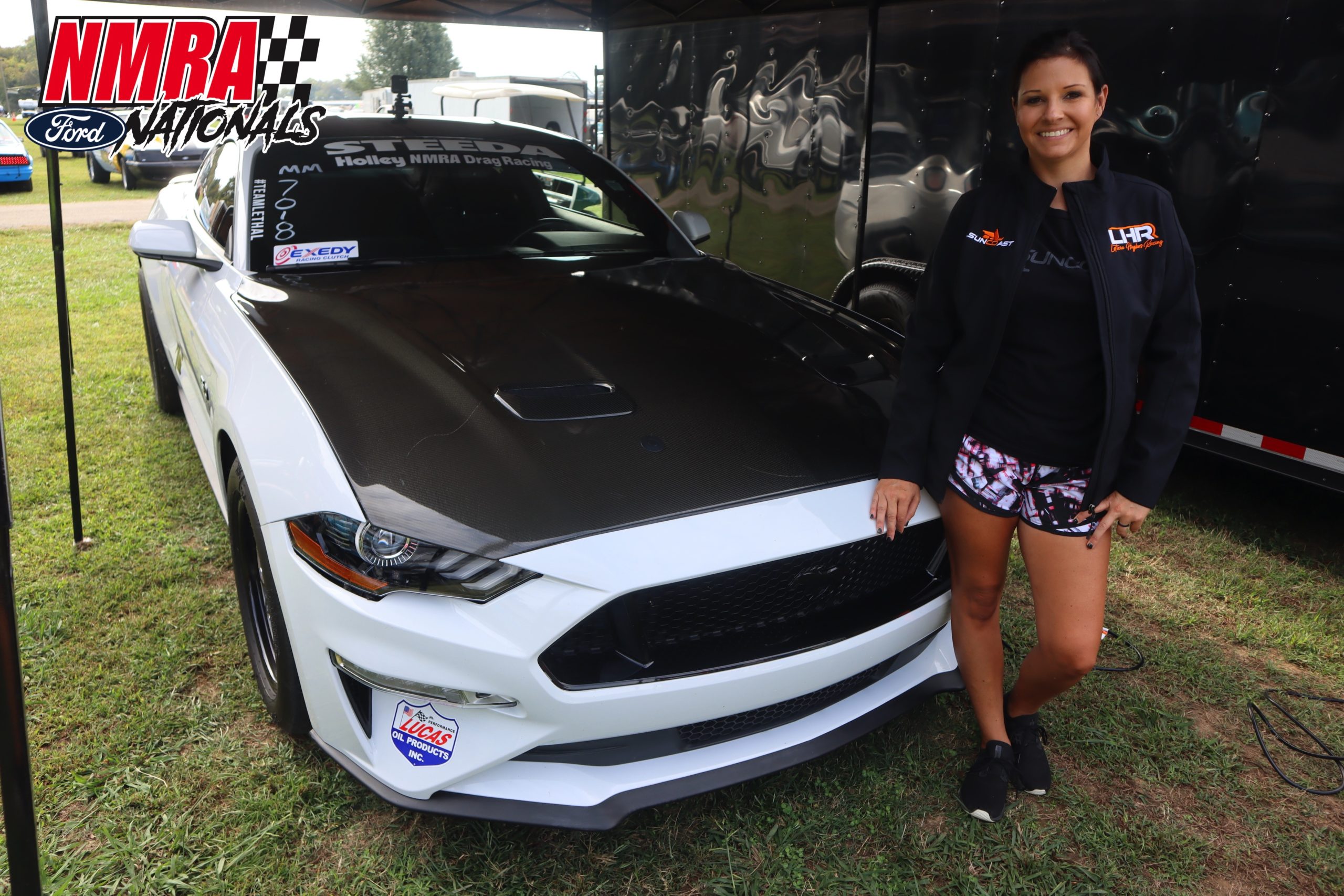 Running for the first time in the Exedy Racing Clutch Modular Muscle class at the Whipple Superchargers NMRA All-Ford World Finals Presented By Competition Clutch & Holley Intergalactic Ford Festival, Leticia Hughes wanted a challenge after running consistently in the QA1 True Street class. Swapping from street-legal rubber to race tires, she ran 10.30 and 125 on a soft hit, but the car has run as quick as 9.85 at 140 mph. Hughes, who is now a Brand Ambassador for Suncoast Performance, hopes to improve on that number in the off-season as the air temperatures fall at Beech Bend Raceway, which is her home track. 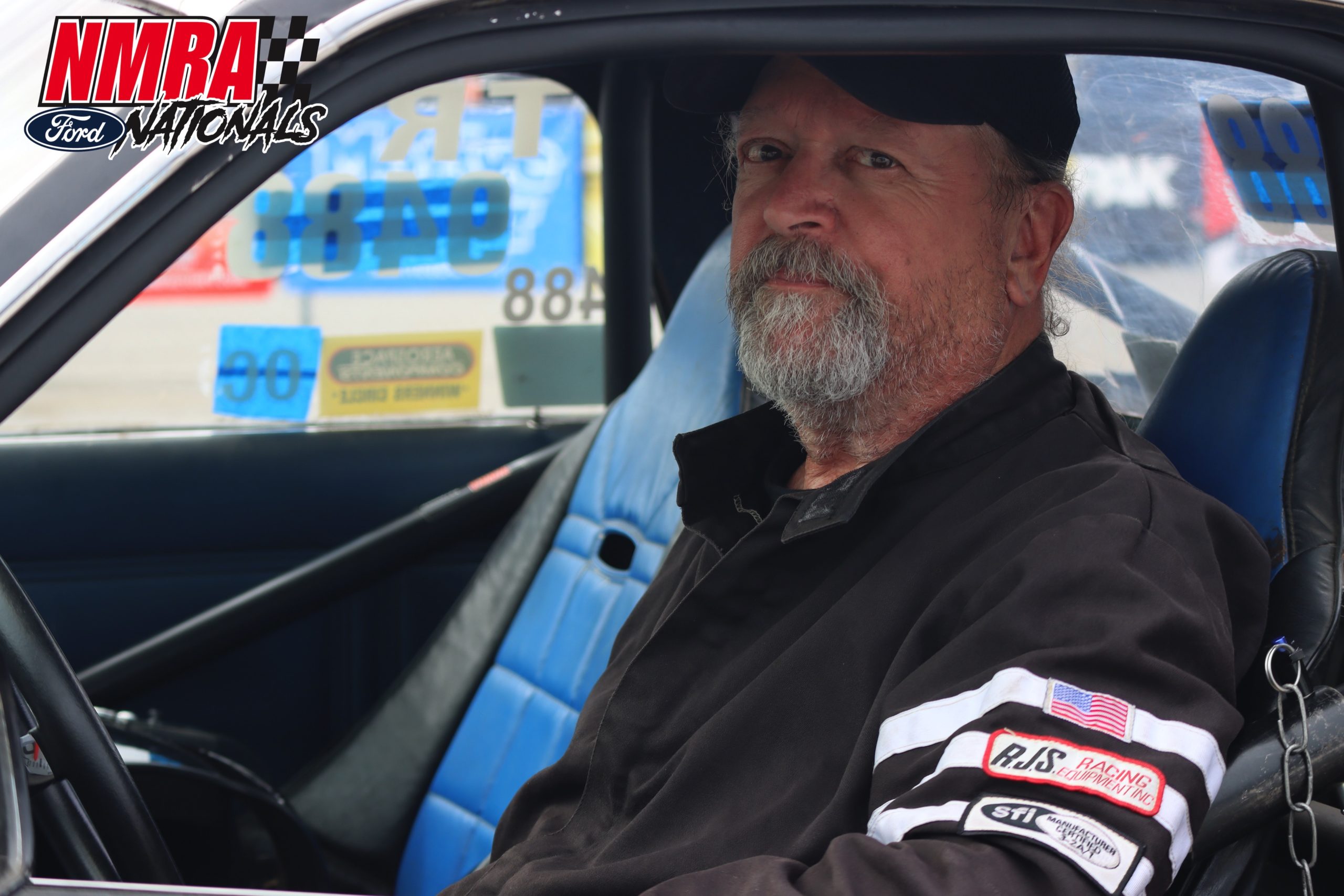 Heading into the weekend, Detroit Locker Truck & Lightning stalwart Mike Roup sat atop the points standings. It's been more than a decade since the Ranchero pilot won a championship, but he is hoping the fates are his side this weekend. To do so, he will have to outlast a formidable opponent in the form of a multi-time champion, Randy Conway.Â 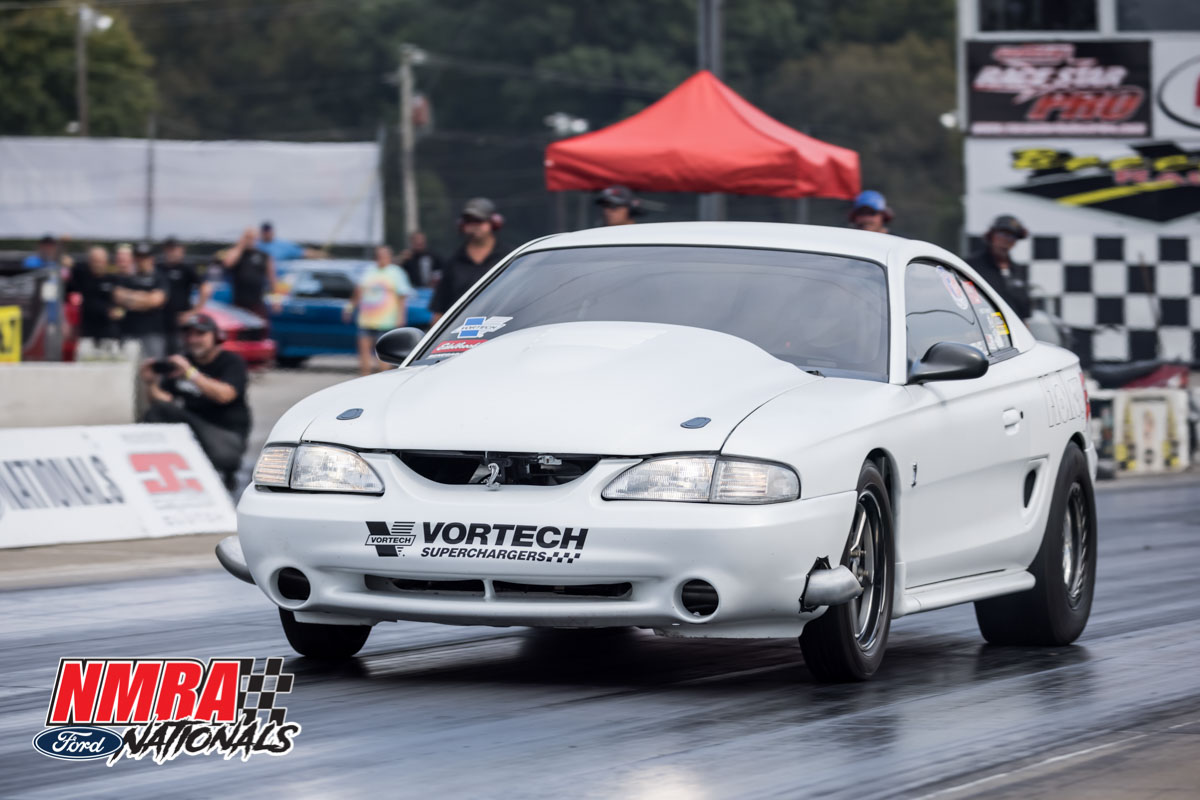 Edelbrock Renegade driver Kelly Shotwell made a late-season driveline change, replacing his turbo small-block Ford combination with a V-30 Vortech-supercharged Coyote powerplant. Shotwell currently sits 12th in qualifying with a 5.37 and his happy with the decision on the engine choice. Now he just needs to work on optimizing the torque converter to achieve maximum performance. 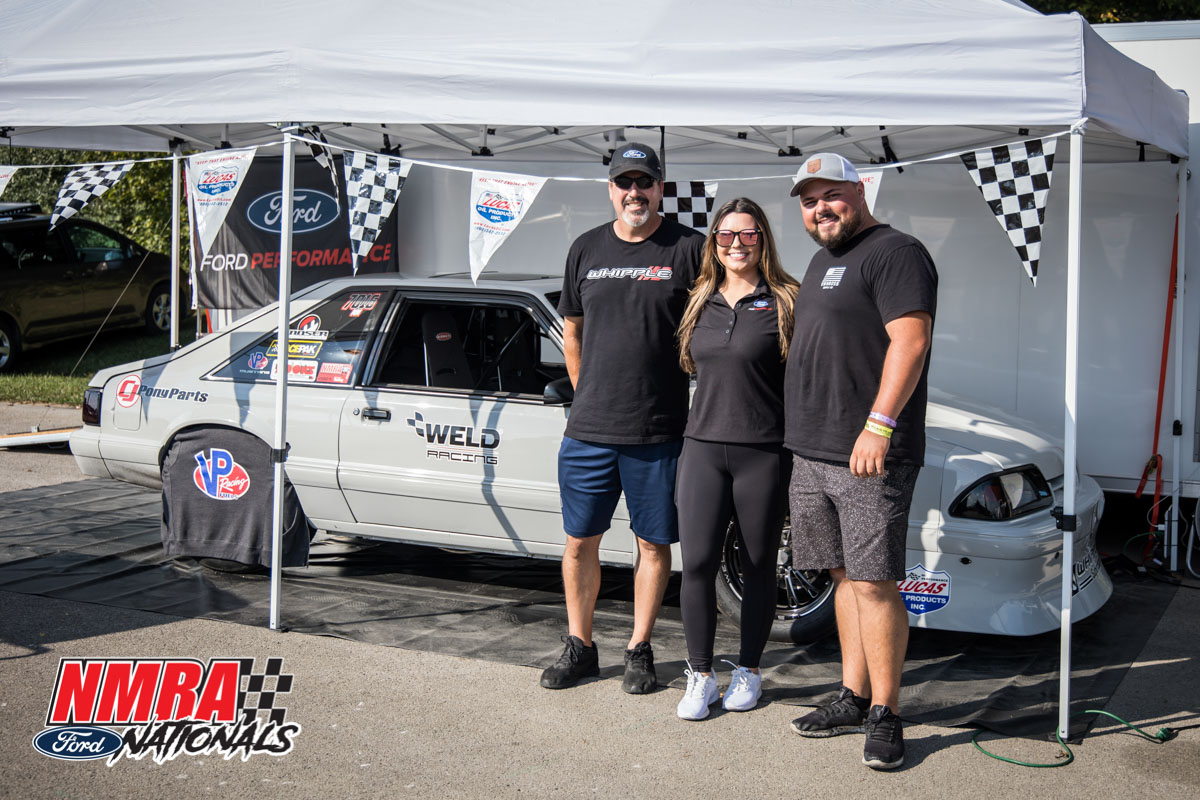 Autumn Schwalbe has owned this Smoke Gray 1989 Mustang for a few years now, and first hit the track in it with a stock Coyote 5.0-liter under the hood. Since then, the Global Ford Performance Marketing Specialist has added a 3.0-liter Whipple supercharger for a little added boost, and is making her final license passes this weekend and competing in Exedy Racing Clutch Modular Muscle. Schwalbe's Mustang currently uses a Ford Performance controls pack for engine management, but she'll be upgrading in the off season to a Haltech system. So far, on a conservative tune, her Mustang has charged to a 9.72 on low boost.
Drag Racing