Few modern engines capture the essence of a true muscle car like the 392 ci (6.4L) HEMI V8 in the Charger and Challenger Scat Packs. It has that classic V8 sounds and produces 485 horsepower. But what if we told you Vortech Superchargers has an option to boost the legendary motor to another level with its intercooled, supercharger system that takes the big HEMI to over 700 hp?

Even in stock form the 392 pulls hard to redline and like a proper large-displacement performance motor should, produces mountains of torque everywhere on the tach. But as good as the 485 hp and 475 ft-lb pushrod V8 might be from the factory, for many gearheads, that’s not enough. And that’s where Vortech comes in.

While basic bolt-ons, plus an aftermarket tune and good fuel can yield 50 hp over a stock on the 392, for those who want to go Hellcat hunting, Vortech can wick-up your Scat Pack to 730 hp and 645 ft-lbs on just 7 psi using 91 octane pump gas with its complete intercooled supercharged system.

While it’s not uncommon for power-hungry Scat Pack owners to make the jump to a Hellcat, that process can be pricey, sometimes costing upwards of an additional $30,000 or more. Thankfully, there’s now another route for those wanting to take a more unique route, save some funds and keep their big-inch HEMI.

“The Scat Pack systems are truly a complete kit with everything an owner needs to easily and reliably push power over 700 hp on 91-octane fuel—when we say everything, we mean it, even down to including a box and a prepaid label to send the PCM to be unlocked for the Vortech tuning, so there’s no loose ends or having to get the car tuned separately,” Brian Cox, Content & Brand Marketing Manager at Vortech said.

Like anyone who’s tried to piece together an incomplete blower kit will tell you, it’s the plethora of small things and the unforeseen that break you—it pays to purchase something that’s been thoroughly engineered to work.

“Vortech Superchargers has always prioritized reliability and durability with our systems, and as many in the automotive aftermarket can attest, it’s incredibly difficult calibrating modern HEMI cars, but after spending countless hours on the calibrations for our kits, we were able to ensure that they maintain factory-like drivability, supreme reliability and are 50-state emissions compliance (D-213-39) as well,” Brian said.

Modern HEMI tuning is so complex that lesser kits on the market have been known to suffer from poor drivability, lumpy power curves and in some cases, have damaged engines due to improper calibrations.

“Other things that set our kits apart are the fact the install doesn’t require cutting or removal of any factory safety components and it also comes with an air-to-water charge cooler that keeps heat soak at bay and is rather stealthy hiding behind the bumper,” Brian explained. “The kits are available for both A8 automatic and M6 manual-equipped cars, and the 720 hp figure and 7 psi of boost is achieved at the stock redline, which means you don’t have to rev it beyond the factory rev ceiling and risk reliability,” he added.

The included air-to-water charge cooler is further proof this is a top-shelf package, but so is the V-3 Si supercharger the kit is anchored around. This trick snail features a patented self-contained oil control system so there’s no need to tap the oil pan for an oil feed line like the days’ of old. The high-tech centrifugal compressor has an impressive 78-percent adiabatic efficiency rating (using the SAE J1723 standard), which means it brings the boost without the heat. It has a step-up ratio of 3.61:1, has a max speed of 52,000 rpm, a peak boost rating of 22 psi, can flow up to 1,150 cfm and is good for up to 775 hp.

Power figures are cool, but so are the wicked sounds Vortech blower kits are known for, and this one won’t disappoint.

“The V-3 Si supercharger features the quieter helical cut gears that have mellow, but not overwhelming, whistle; this kit also utilizes our cogged pulleys that eliminates belt slip and also adds a cool sound,” Brian said.

Speaking of cool sounds, as if the whistle of the blower gears and the cogged pulleys aren’t cool enough, the Scat Pack kits utilize the billet aluminum BV57 bypass valve that maximizes boost and amplifies the incredible whooshing and swooshing sounds we’ve come to love from Vortech blowers coming in and out of boost.

A Vortech-charged Challenger Scat Pack in Action
Terry Reeves and the team at Beefcake Racing might be most known from their success in the Mustang world and for competing in NMRA events across the country, but diehard Mopar fans also know that they specialize in fast and boosted Mopars too.

With the Vortech V-3 Si blower kit in place and the Vortech calibration installed, it laid down an impressive 589 hp at the wheels on 6-7 psi of boost. After upgrading the fuel system and adding aftermarket tuning for E85, the car eeked out a few additional ponies and clicked off an impressive 10.55 at 130.53 mph pass on a 1.45 short time. Keen eyes will note that’s fast enough to best a stock Hellcat by a good margin. A closer look at the dyno graph backs-up the timeslip with a strong top-end surge and a smooth torque curve that nicely transitions into boost. With a power curve like that, time slips to back it up, stock like drivability and the legendary performance and reliability we’ve come to expect from Vortech, we’d say Hellcat owners, beware. 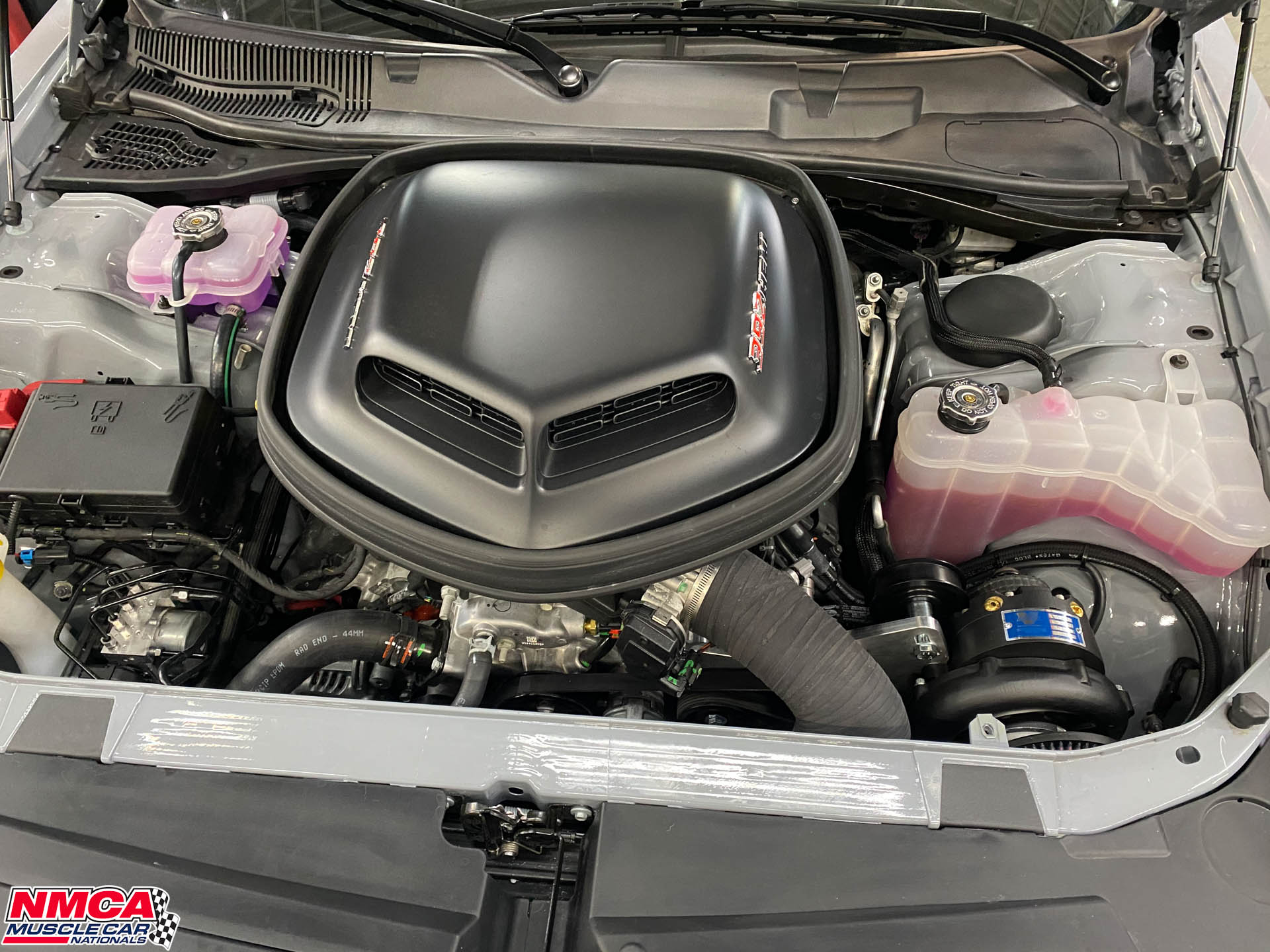 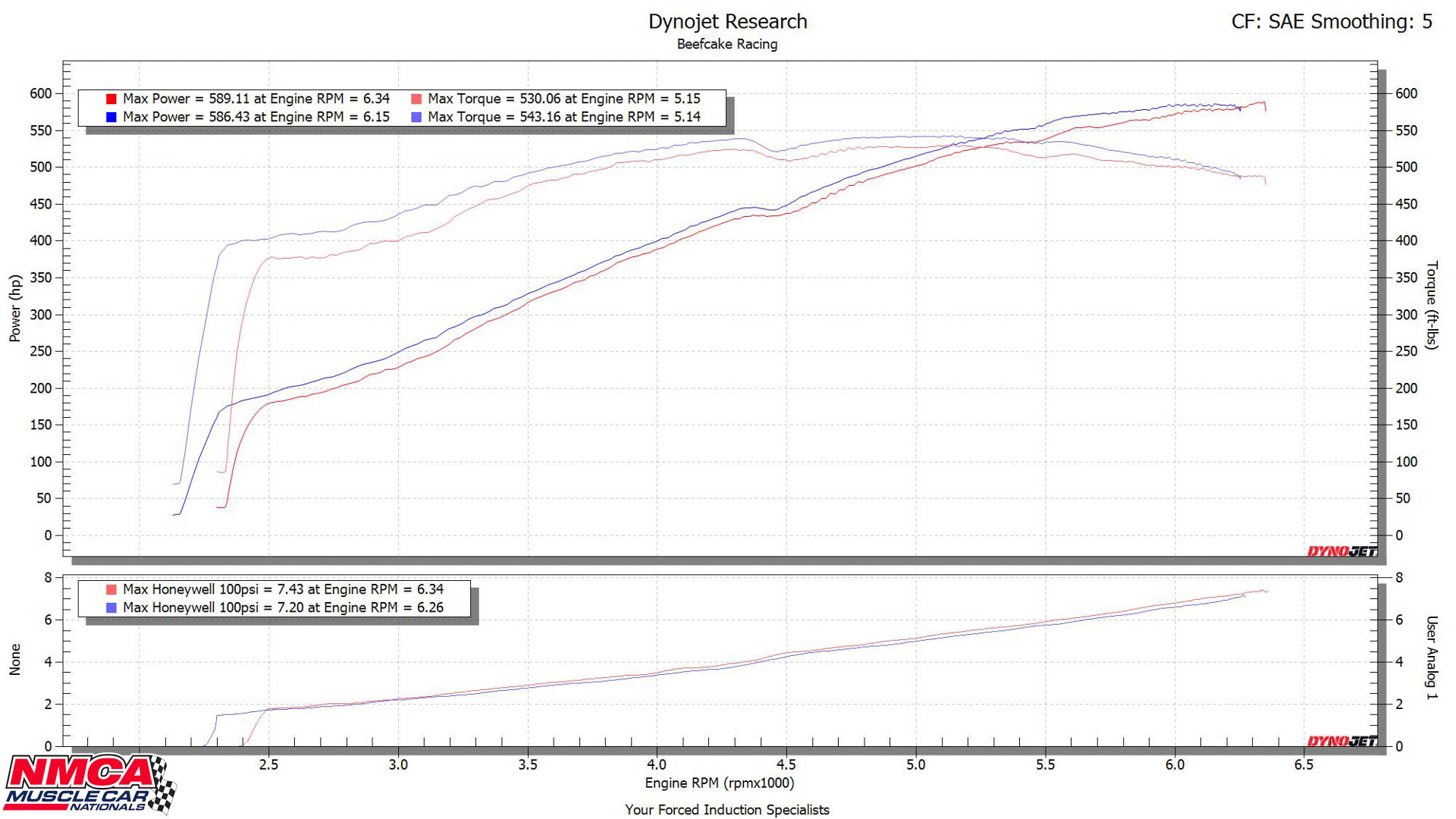 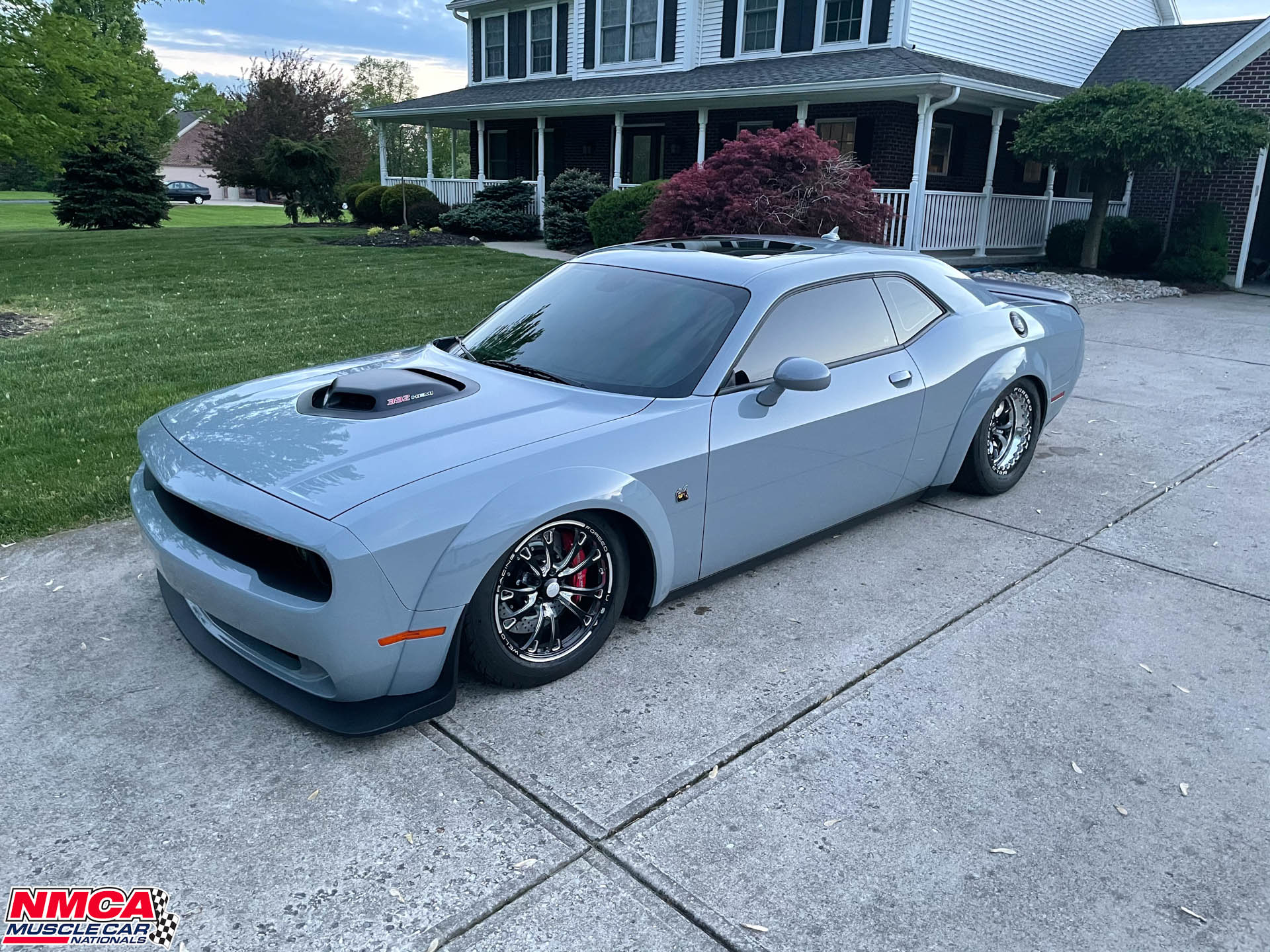 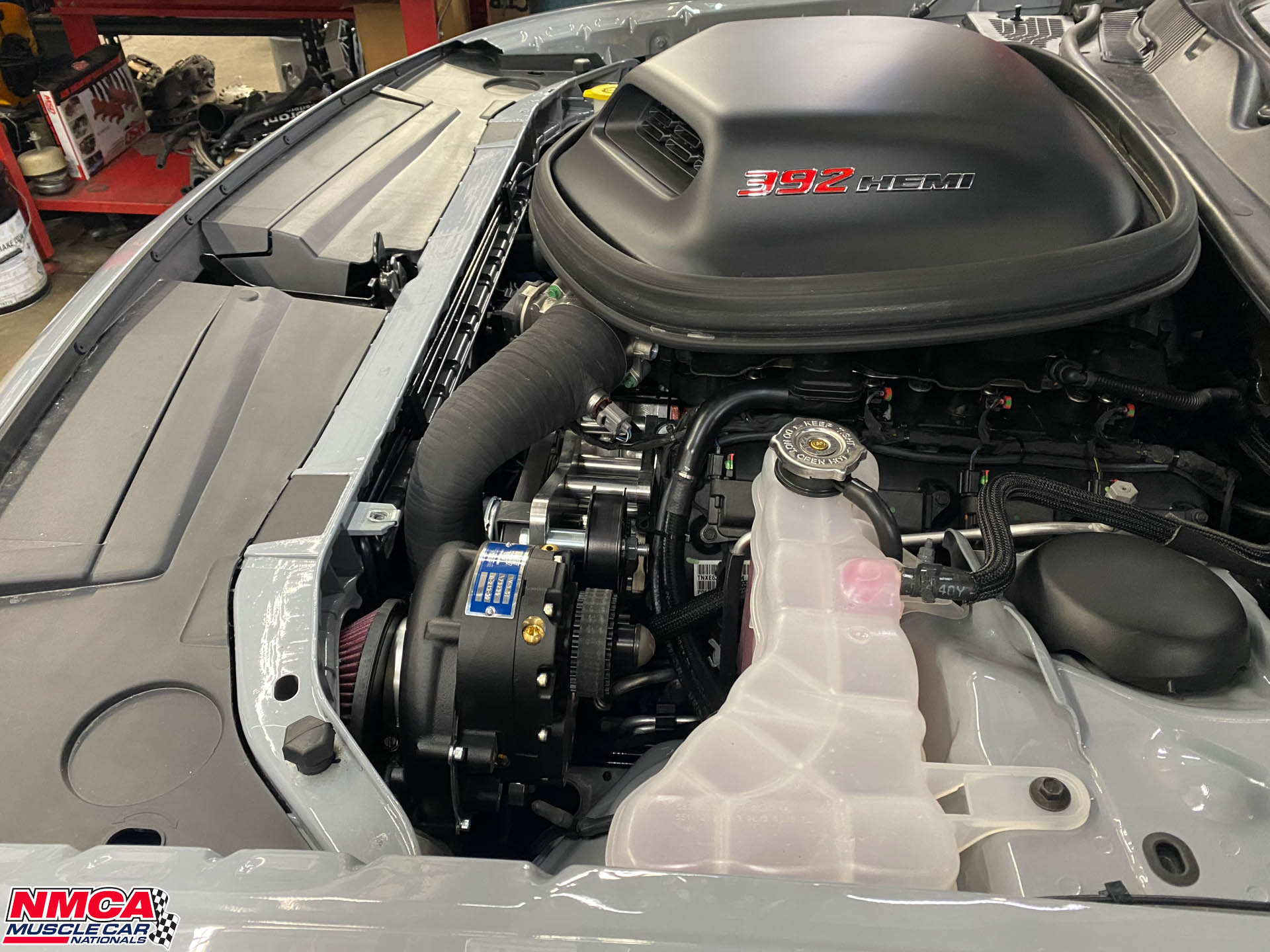 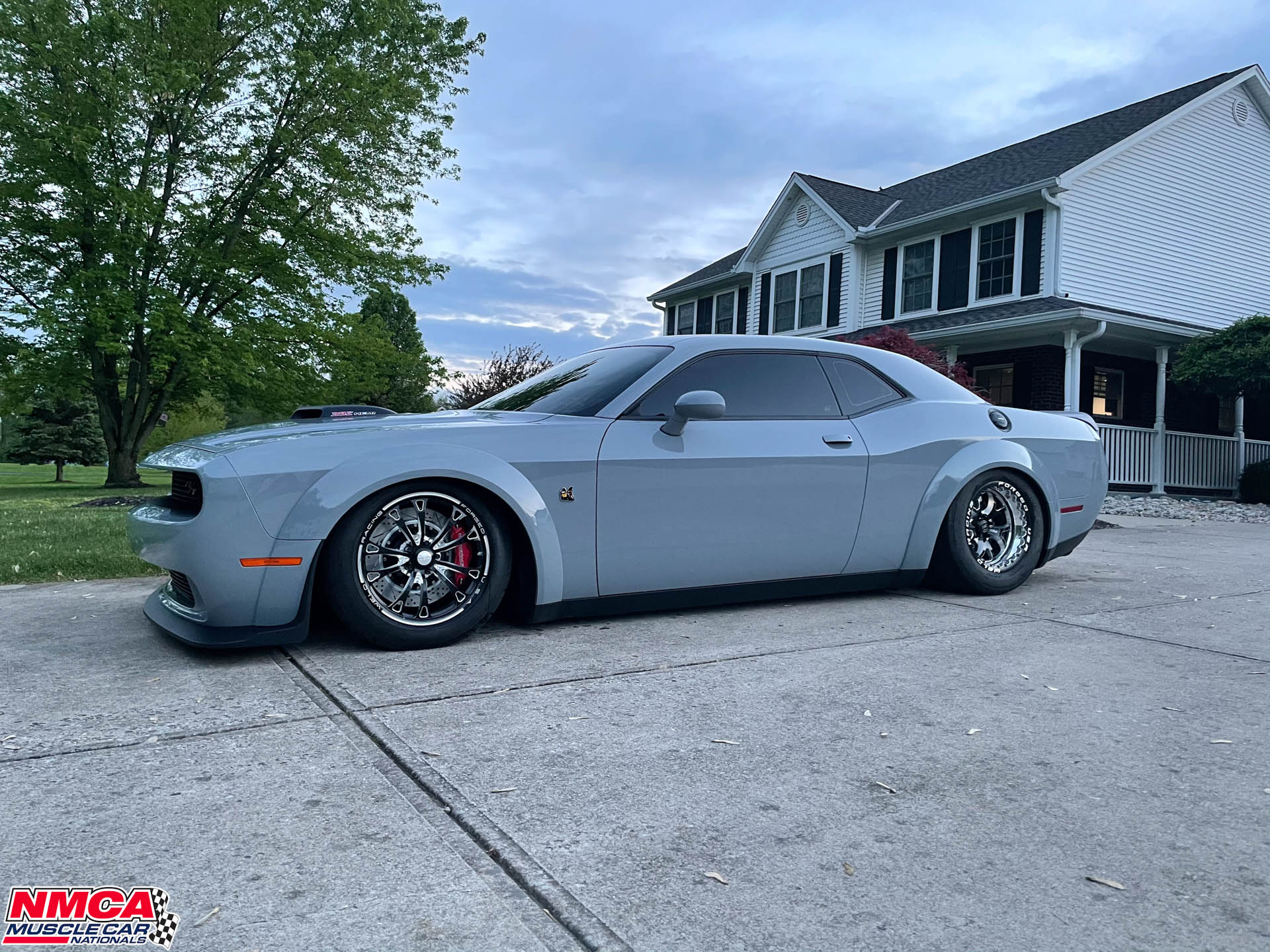