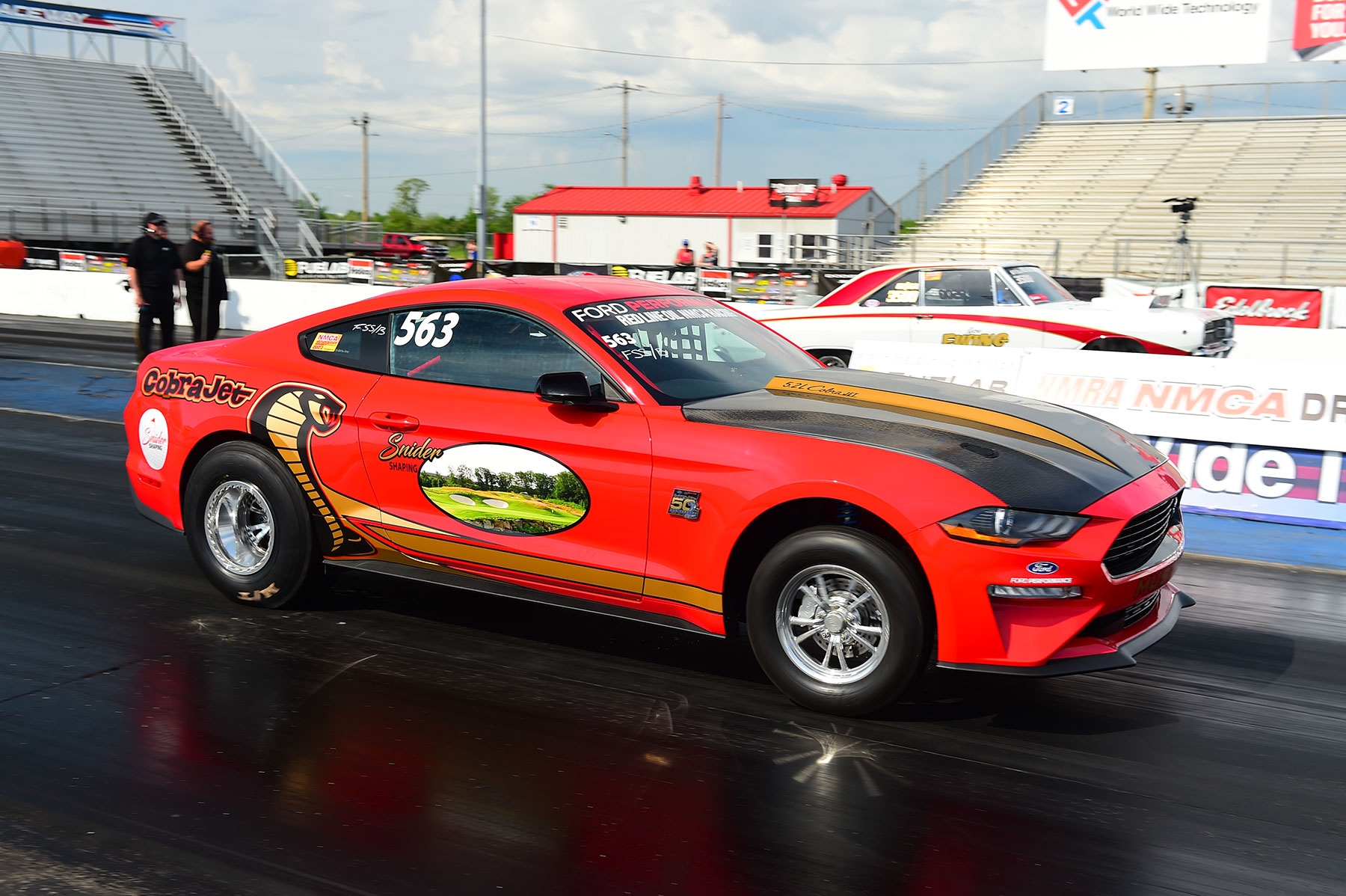 Debuting in NMCA Super Stock at the NMRA/NMCA Super Bowl of Drag Racing at World Wide Technology Raceway in St. Louis, Missouri, in May of 2022, Keith Snider had a blast wheeling his 2019 Ford Mustang Cobra Jet but knew his time in the driver’s seat was limited as his ultimate goal was to hand the car over to his son, Jackson.

Prior to his NMCA debut, Keith had attended Frank Hawley’s Drag Racing School in December of 2021 to get his competition license. Unfortunately, the Rogersville, Missouri-based racer’s big debut didn’t go quite as planned as his Cobra Jet’s engine let go after just six passes.

Fortunately, Keith had the Watson Racing team on his side and was able to regroup in time to attend the NMCA All-American Nationals at Norwalk, Ohio’s Summit Motorsports Park in late August. “We pit with Watson Racing; they tune our car, coach us, and really help so much,” shared Keith, whose son has also learned a lot from the great group of guys. “Jackson packs the parachute, makes sure the tires are set right, puts ice in the intercooler, and I do the fuel and driving.”

In Norwalk, Keith doubled down and entered both NMCA Super Stock as well as the Watson Racing Cobra Jet Showdown. “We made about 15 passes that weekend and I got a lot more comfortable in the car,” noted the driver, who wasn’t able to get past the first round of eliminations despite qualifying well. “Watson Racing has been incredibly encouraging and spoke with Jackson about getting into the car next.” The Watson Racing group has been instrumental for the small father-and-son team getting up to speed so quickly and for helping Jackson feel comfortable enough to step forward in his own driving career. “They always make sure he feels included. He’s one of the guys and learns so much,” said Keith. “Dave Swanson, the 2022 NMCA Stock Eliminator champion, has taken Jackson in and mentored him as if he were one of his own… he’s taught him how to run the computer, tune the car, what to do (and what not to do) in the car. There’s no better guy out there than Dave.”

So, with the Cobra Jet detuned a touch, Jackson jumped behind the wheel in Bowling Green, Kentucky, at Beech Bend Raceway Park to make three practice passes down the drag strip. Confident that his kid was ready, Keith signed Jackson up to attend Frank Hawley’s Drag Racing School and the two traveled to Gainesville, Florida, for the December 28-29, 2022 session.

There, Jackson exceeded expectations and completed his Super Gas course. He also met some big-name NHRA racers including Chad Green and Chris McGaha, and the encounters inspired him to want to eventually pursue a Funny Car license, too.

“I’m happy to have left the School with my Super Gas license with the plan of racing in the NMCA series,” stated the 16-year-old in regard to his experience at the School where he gained not only driving experience, but also valuable life lessons. “I would like to give a special thanks to Mr. Chad Green for supporting me through the class and giving me lots of encouraging words.”

Looking ahead, Keith plans to step back for 2023 and let Jackson take over as the Cobra Jet’s primary pilot in NMCA Super Stock. “He’s very mature for his age. With just the two of us crewing on the car, it’s a lot of work, but he’s doing great,” Keith continued.