Pat Clemente is a long-time Ford fan who grew up in the Foxbody era attending races at Englishtown, Atco and Maple Grove Raceway. He’s enjoyed life as a spectator and racer, having competed in a fast LX hatchback.

But with two young boys to raise, he didn’t have time for racing so he sold the Mustang and grabbed a deal on a 1964 Galaxie 500 for cruising near his home in central New Jersey. Packing a 390 and auto combo, it was no slouch, but he craved more power and a manual transmission. Pat decided to swap in a 427 and a stick, so the hunt was on for suitable parts. He located a block to begin the build and three years ago he had a neat “light-weight” clone. “It was originally had a 390 and automatic, but in 2015 I built a 427 Low-Riser and put in with a Top-Loader to make it a fun street car. Meanwhile, close friend Duane Hoven was in my ear to make it a legit NHRA Stocker.”

Collaborating with NHRA racers Duane and Todd Hoven, a plan was set to build a “legal” Stock Eliminator engine. The transformation wouldn’t be easy because it’s such a big car and he planned to keep it a stick. Plus, there’s not a single Galaxie 500 currently running in Stock or Super Stock so he’d be on his own for suspension and clutch R&D. Then stocker engine is now a 1964 427 “High-Riser” with dual-quads that’s backed by a G-Force Racing Transmissions G101A 4-speed.

“It’s essentially the same engine that is in the Thunderbolt, but the rules are much more restrictive in Stock. You mostly see Thunderbolts running is Super Stock, where you can use any cam, valve train and intake.” said Pat. The 427 is a beast that’s factory-rated at 425 horsepower, but it makes much more in Stock Eliminator-trim. Rules require the factory Holley carburetors, .525-inch lift cam, along with the un-ported intake and heads with stock (2.19-/1.72-inch) valve sizes. The block can be bored up to .080-inch over and you can mill the heads to achieve the bare minimum combustion chamber size. In this case they were machined to the limit and the results give the engine over 15:1 compression!

Running on VP C25 fuel, the center-oiler made 640 horsepower at 6,700 rpm and torque came in at 540 foot pounds. It is backed by a Black Magic clutch and the aforementioned G-Force transmission. Naturally, there’s a 9-inch out back. At B/S weight the Galaxie must cross the scale at-or-above 3,740 lbs., which is heavy considering it’s a “Lightweight.” In Stock, Pat must also use 9-inch slicks and he’s installed Caltracs mono-leaf rear leaf springs and shocks for traction.

We can certainly appreciate the beautiful factory Guardsman Blue and the stock interior that helps the big Ford pull off the nostalgia look. Pat debuted the Galaxie at the recent NHRA Dutch Classic at Maple Grove Raceway, but an ignition/alternator issue kept him from making a full pass. “The plan is to refine the combination and maximize the performance of the engine and then get into the clutch and suspension,” he said. “I’m confident it will run 10.30s one it’s ironed out.”

Pat was quick to thank Chris Whitney, the Hoven brothers and especially his wife Dawn and sons Anthony and Nicholas for endless support. In addition to NHRA, Pat is a big fan of NMRA and NMCA racing and we hope to see the big Galaxie on track and running strong in 2023.
galaxie 500
,
Nmra
,
Nhra
,
stock eliminator
,
ford 427 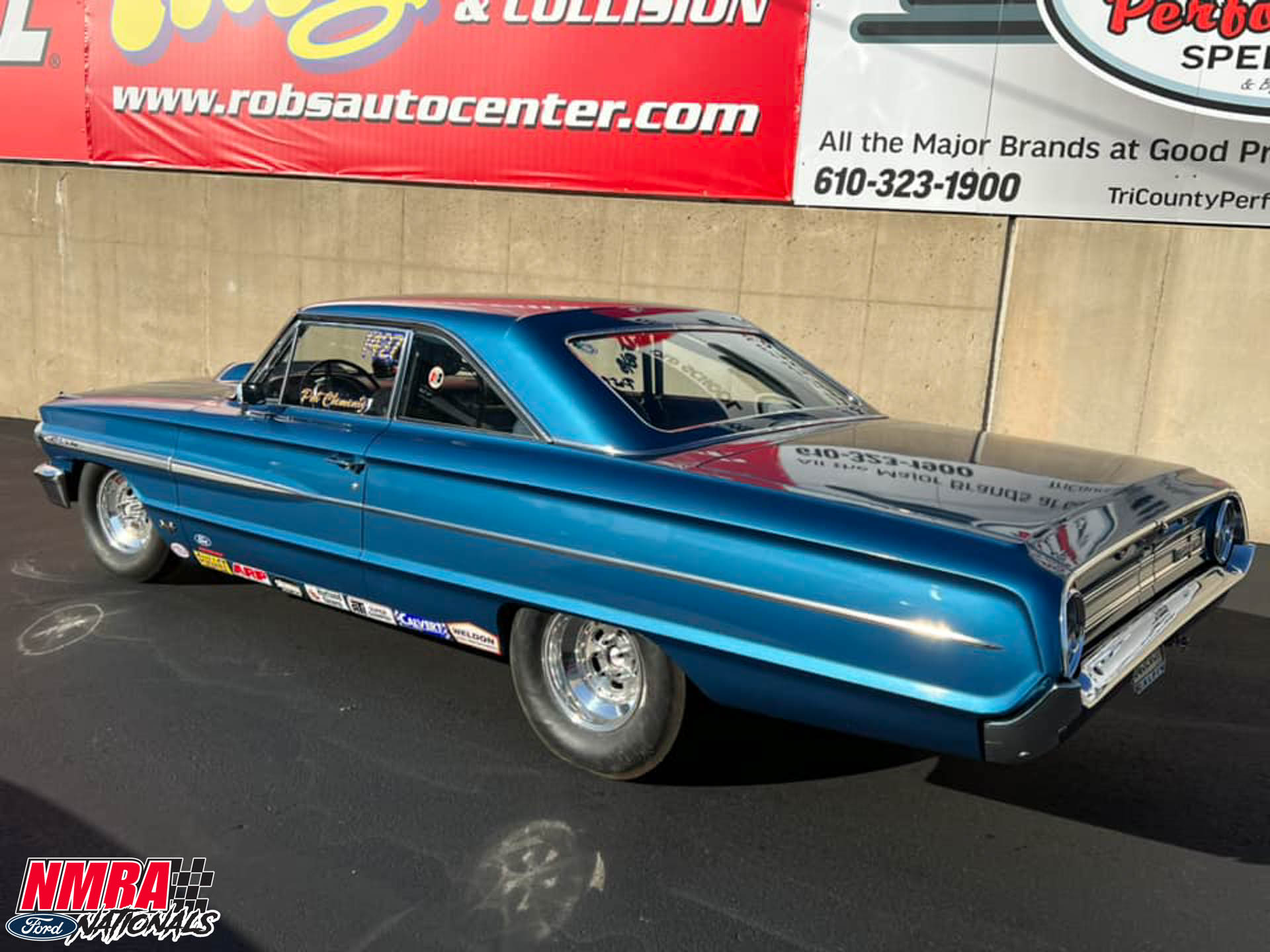 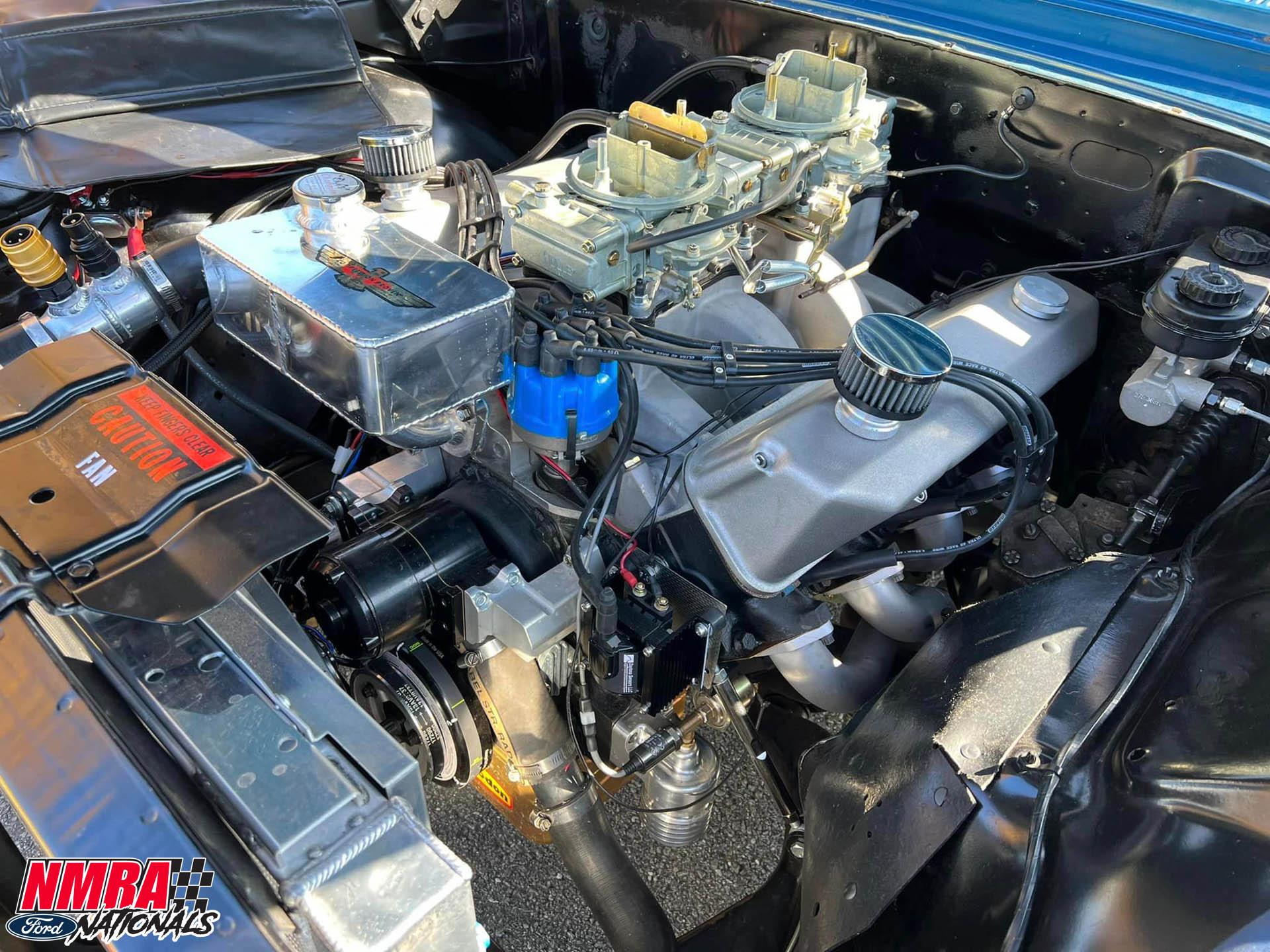 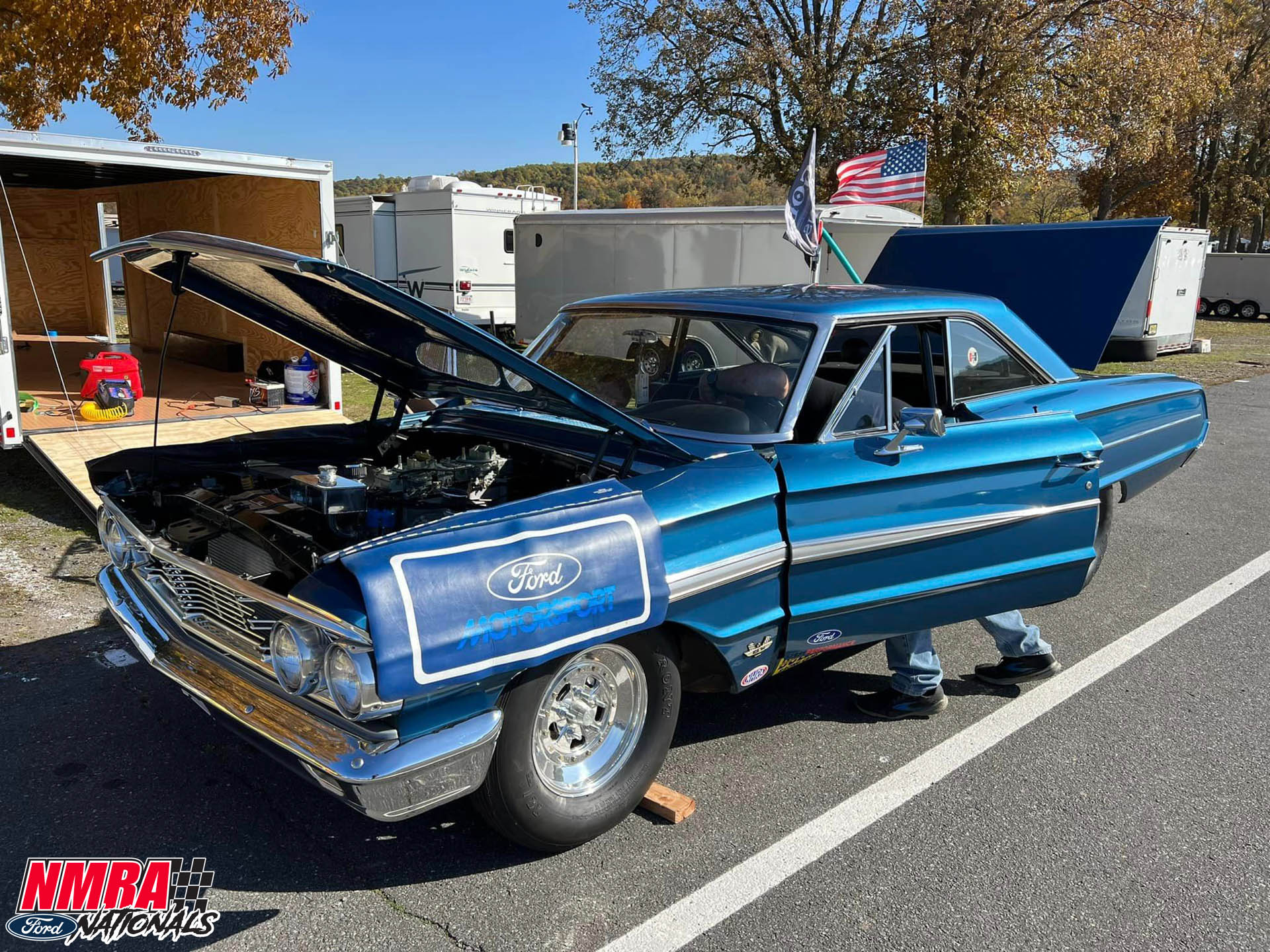 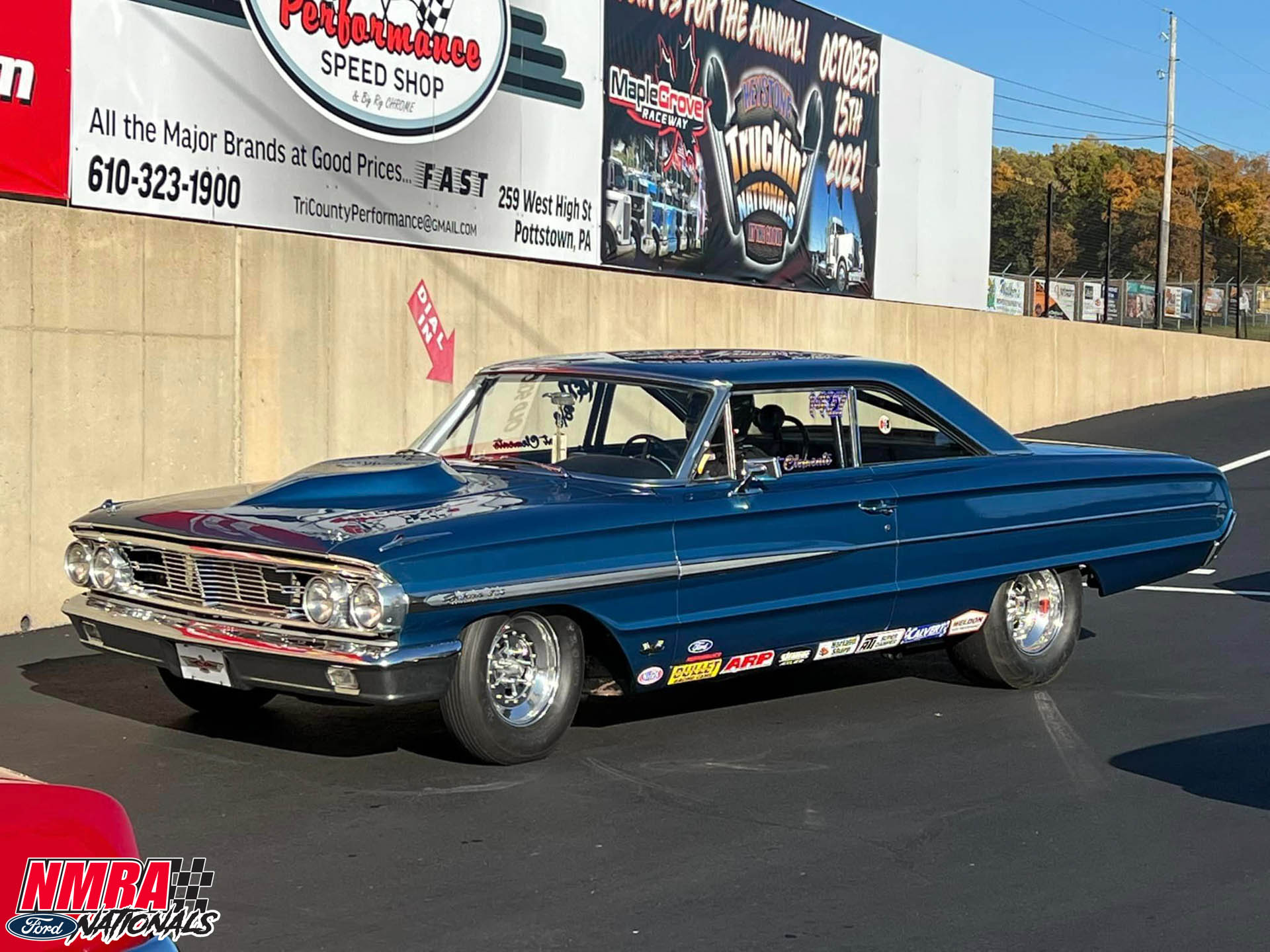 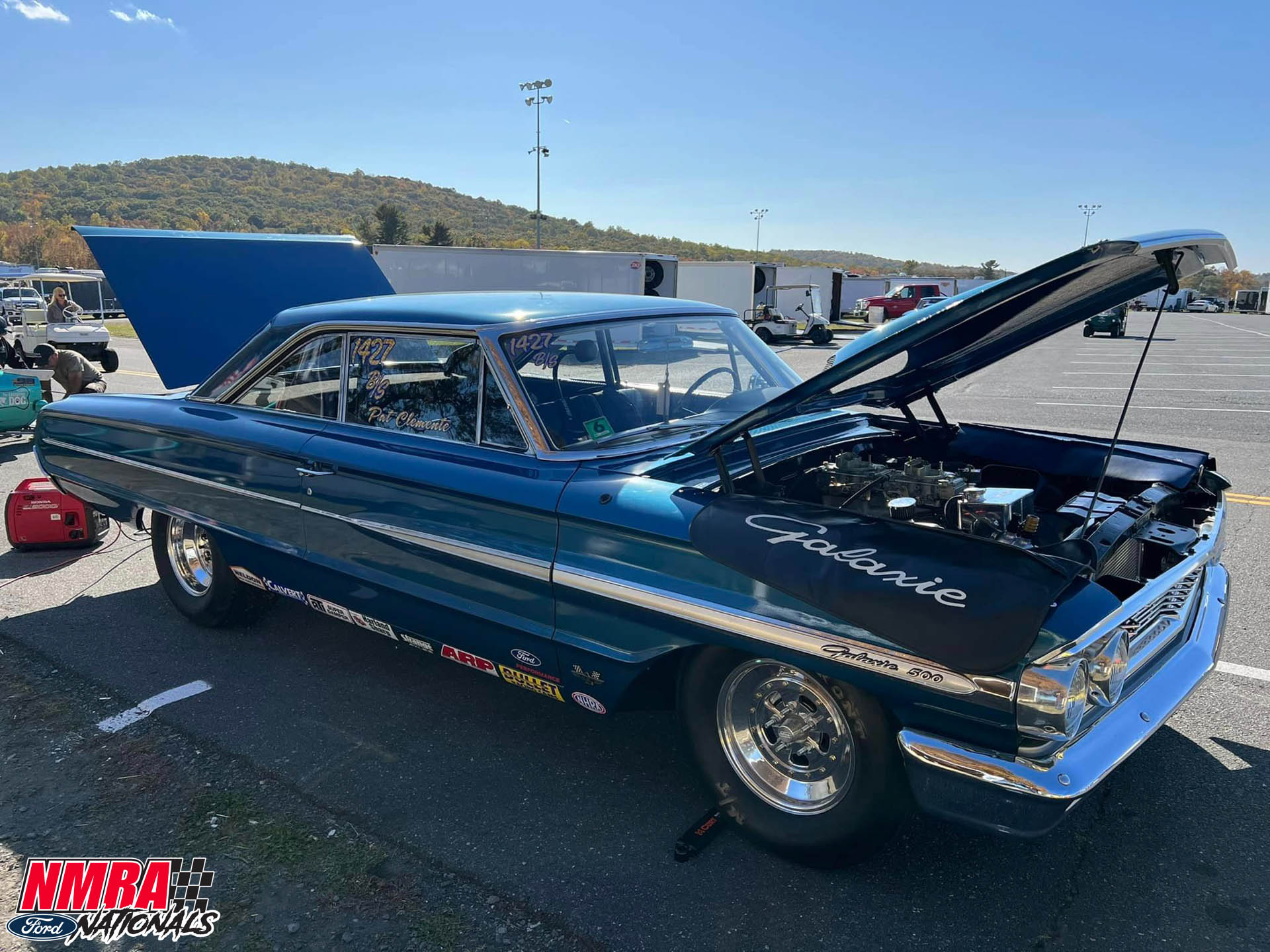 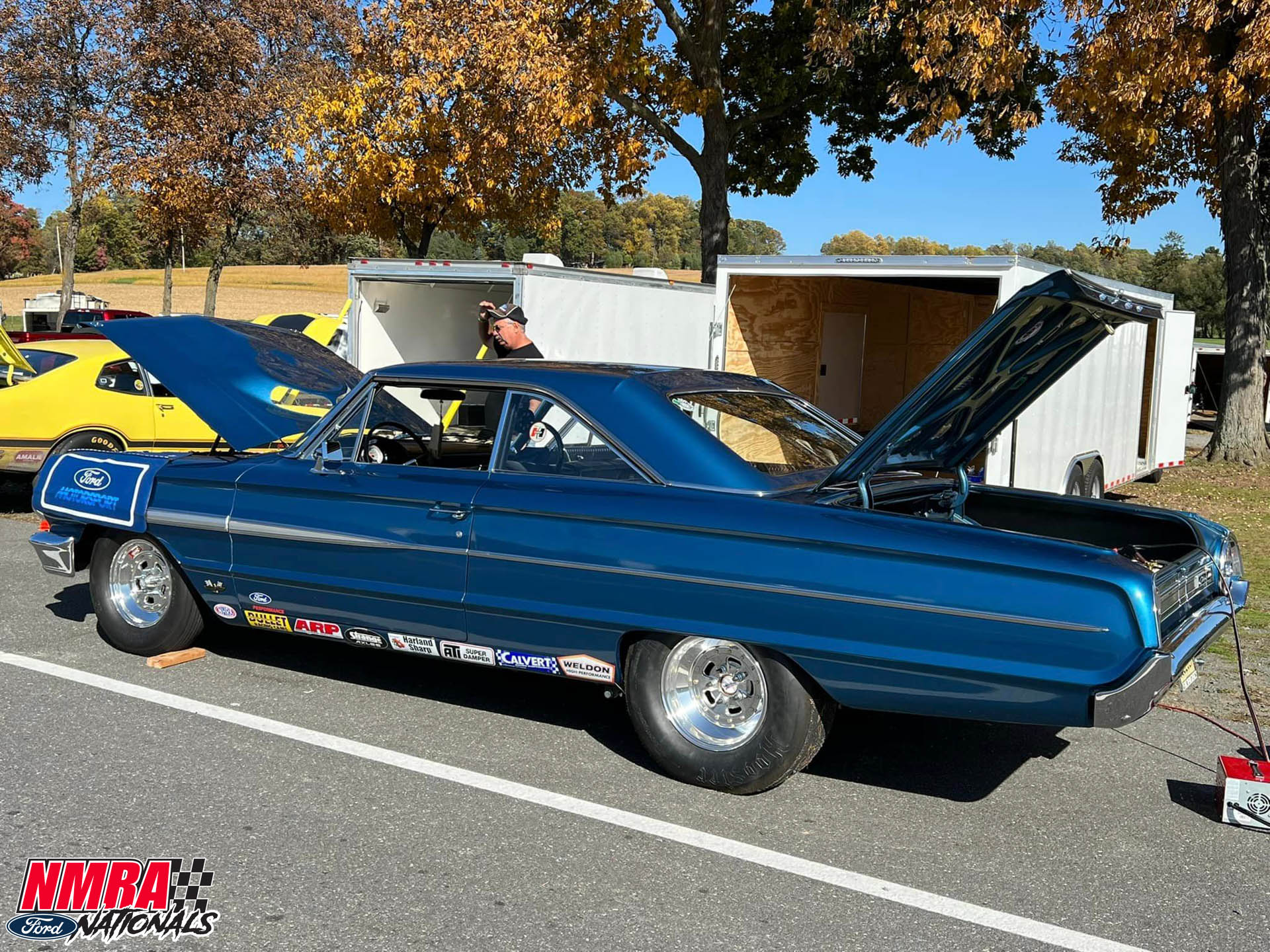 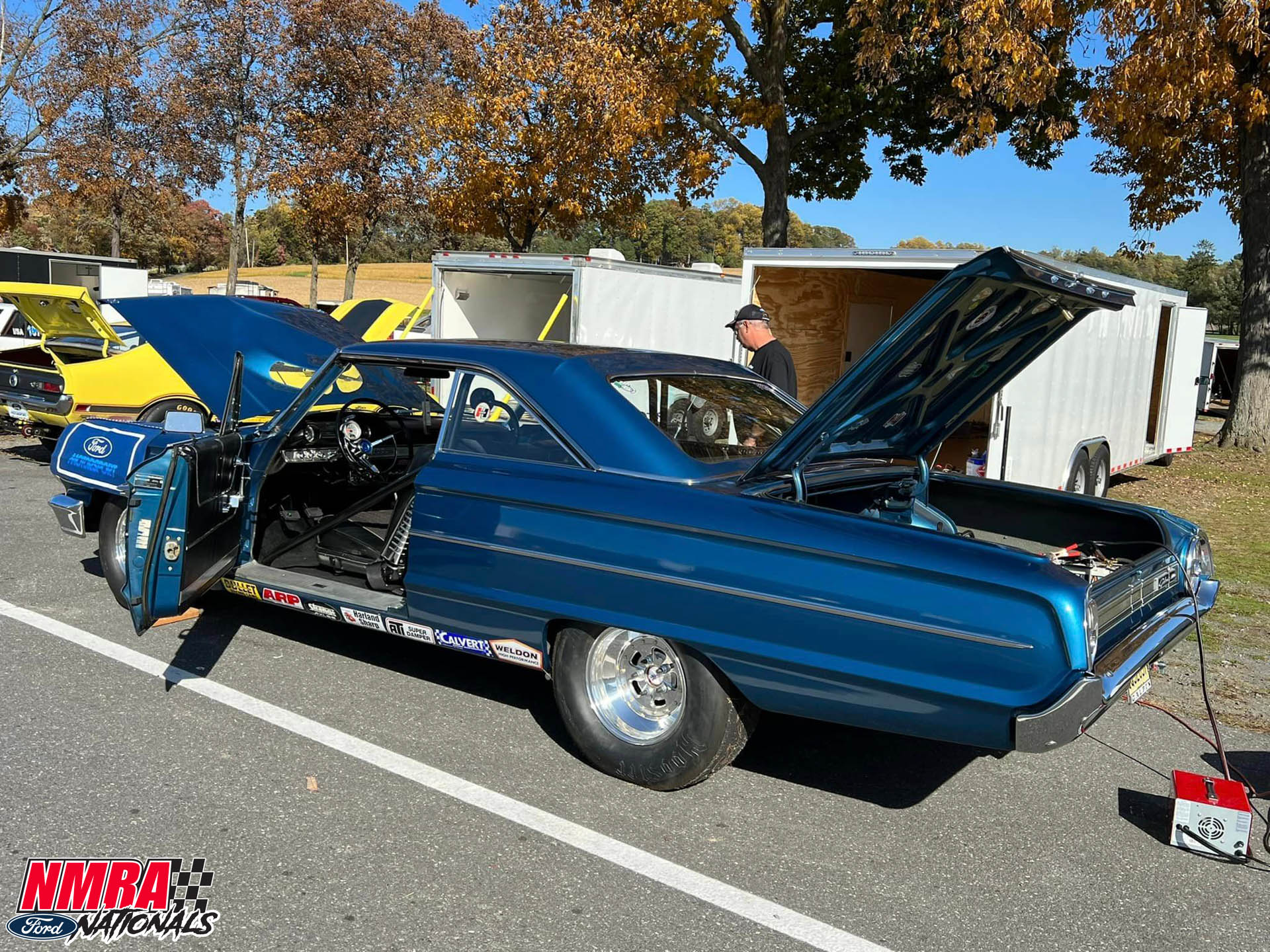 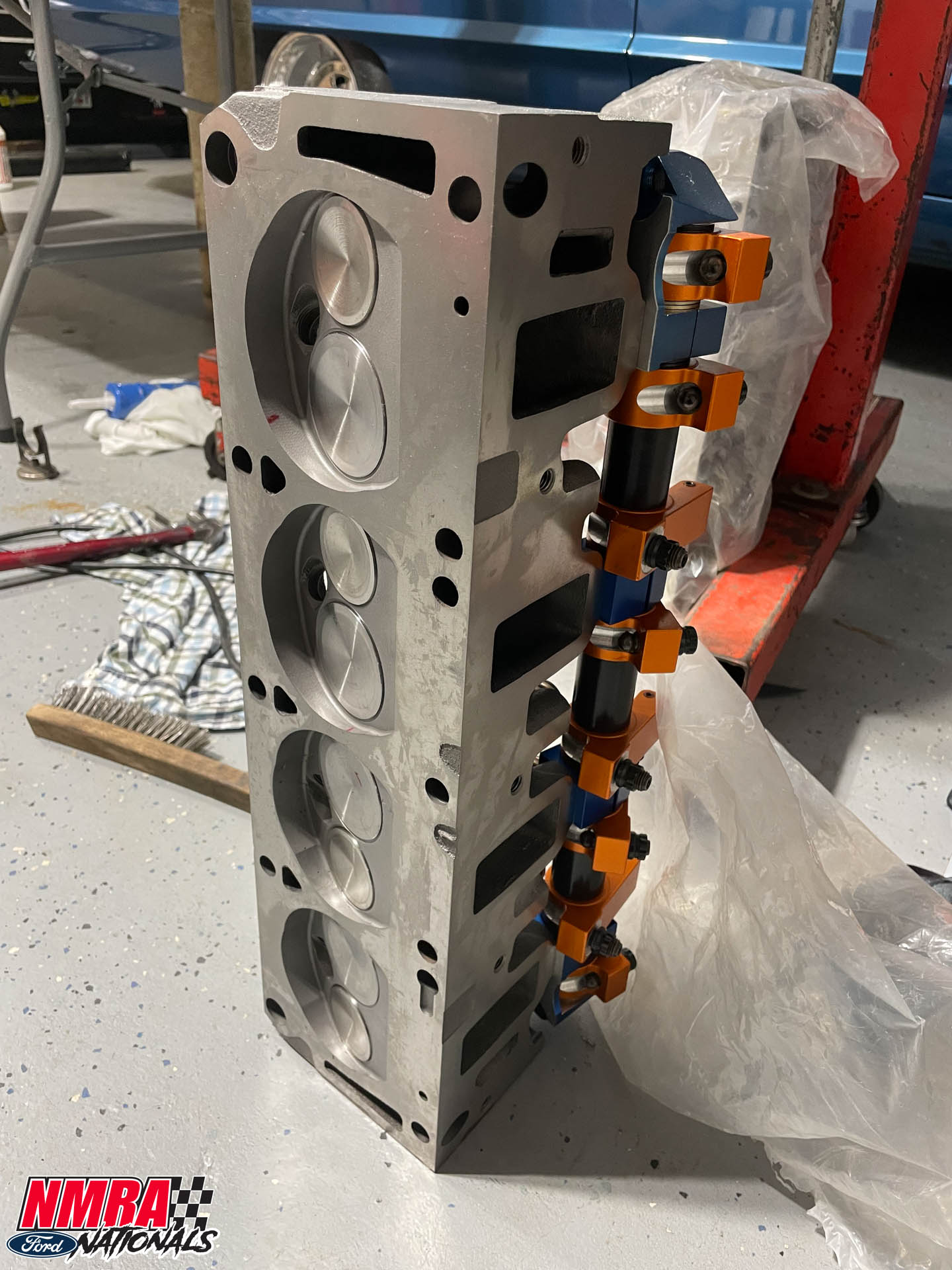 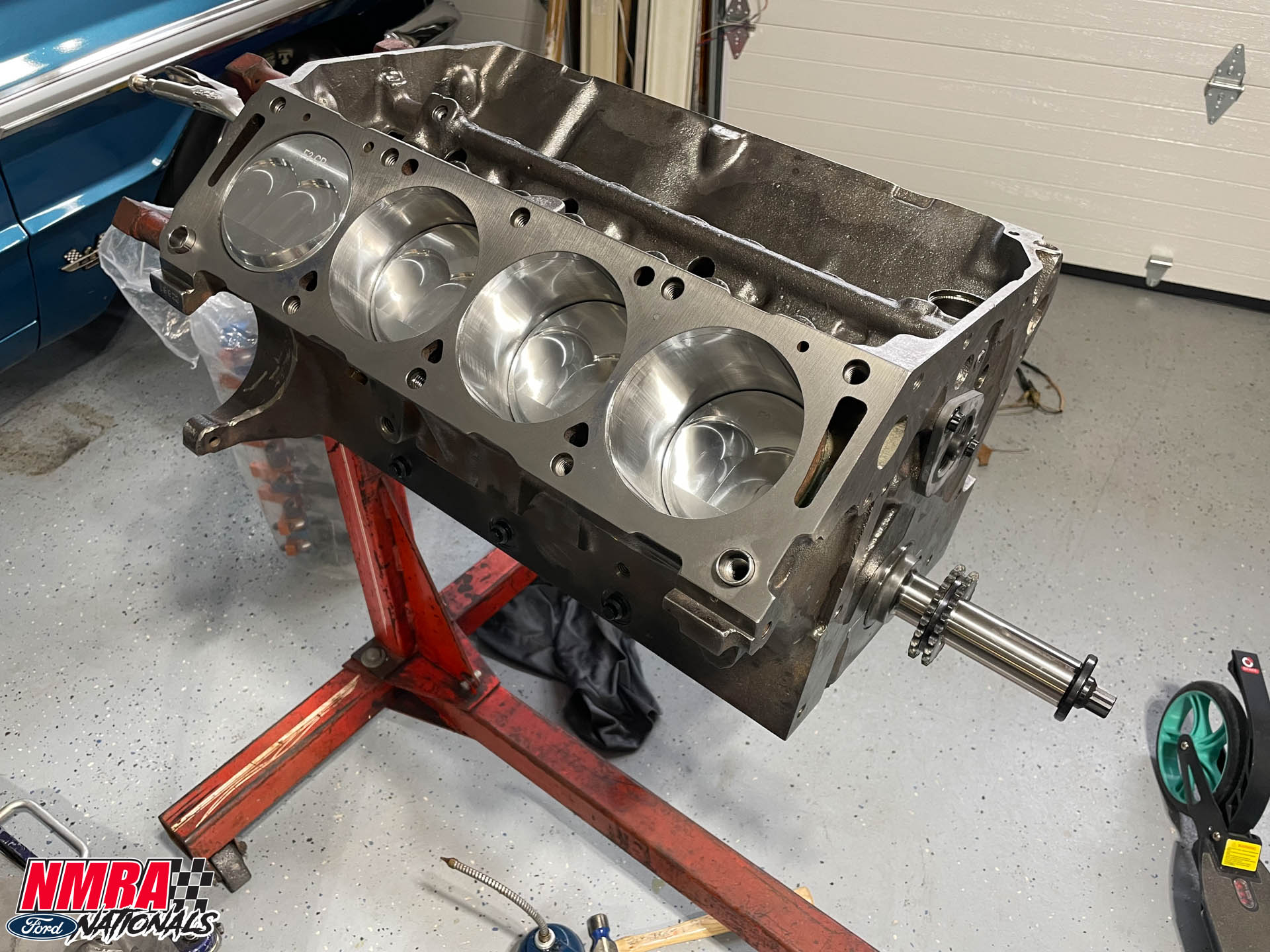 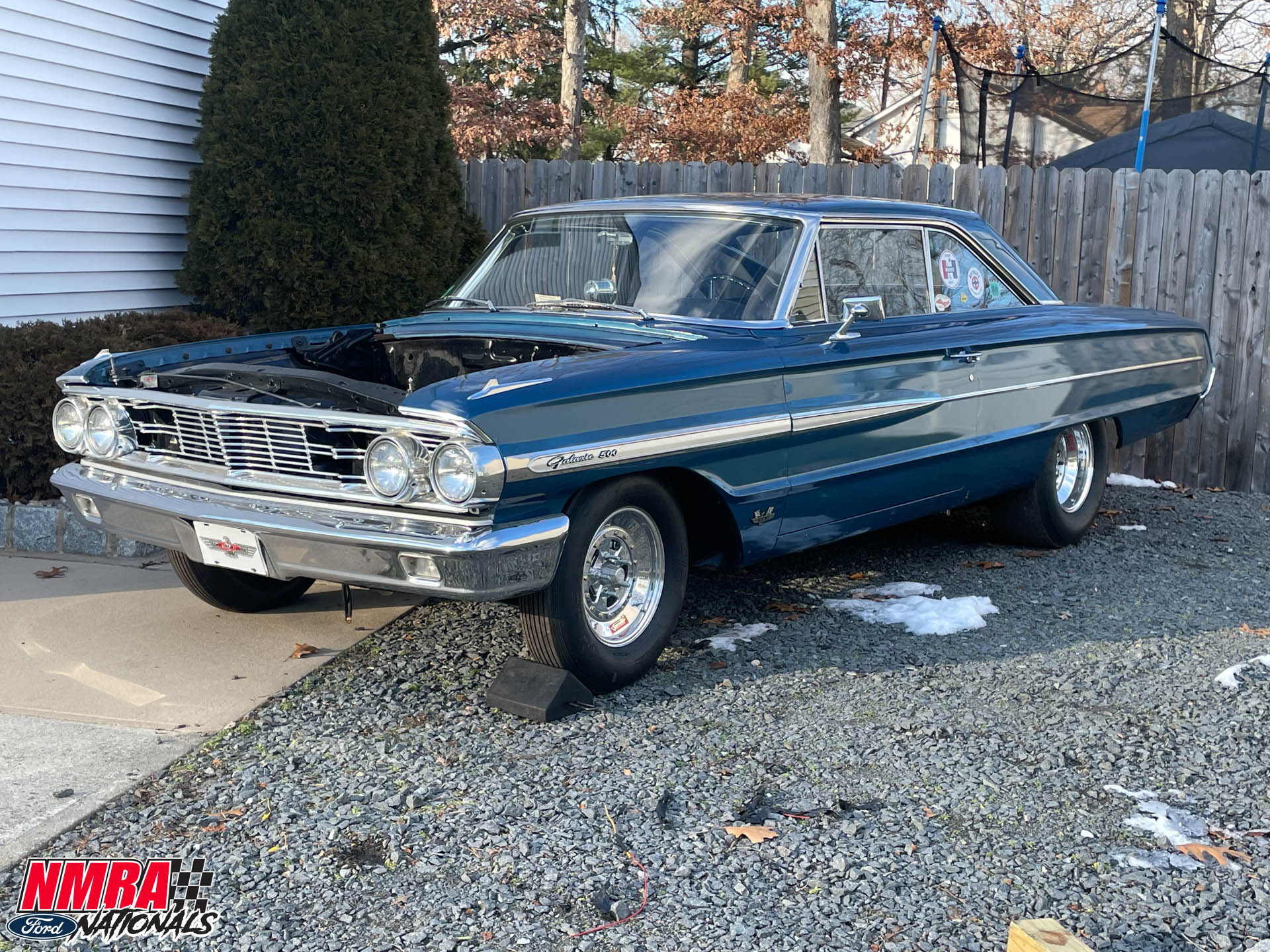 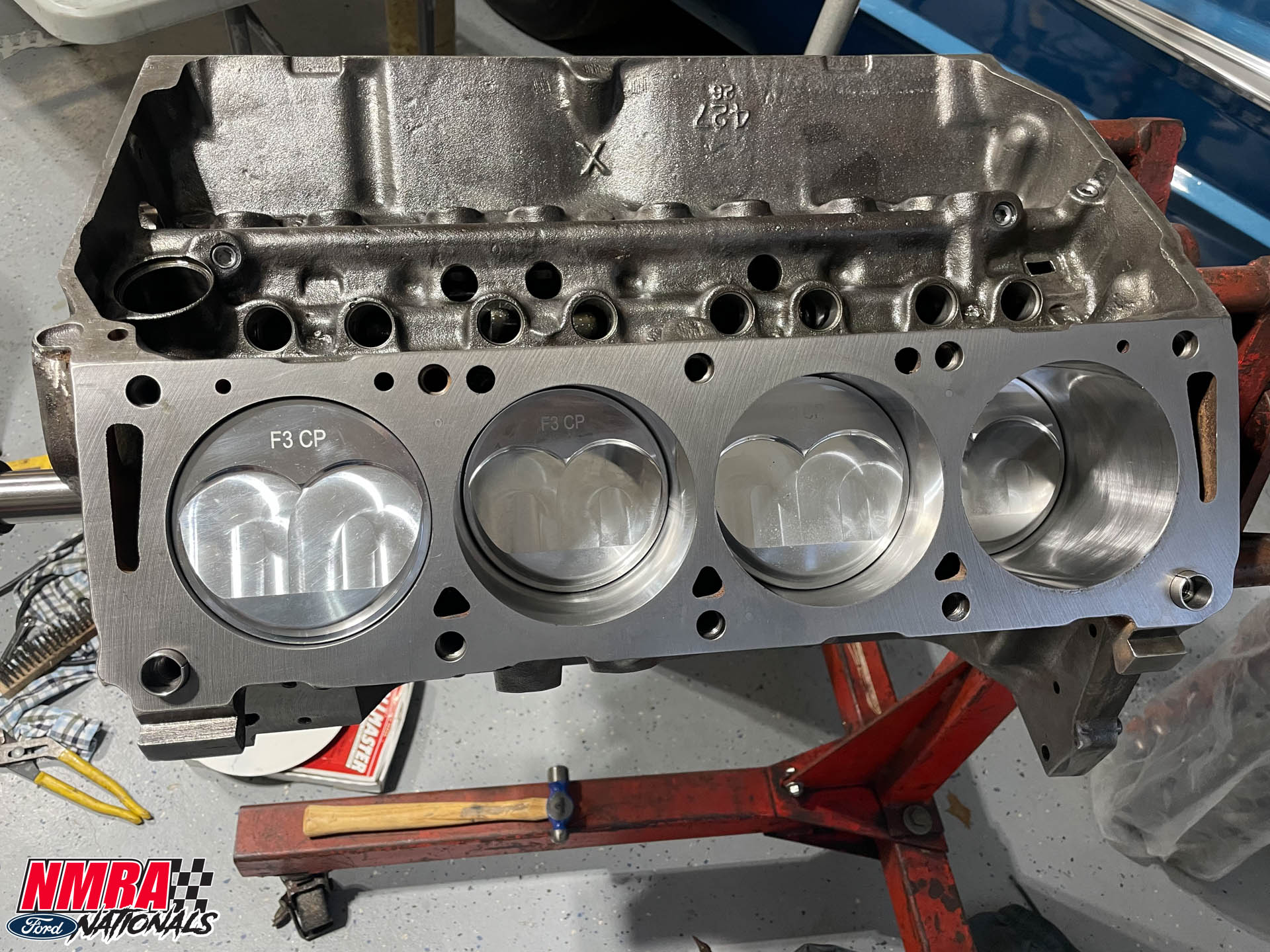 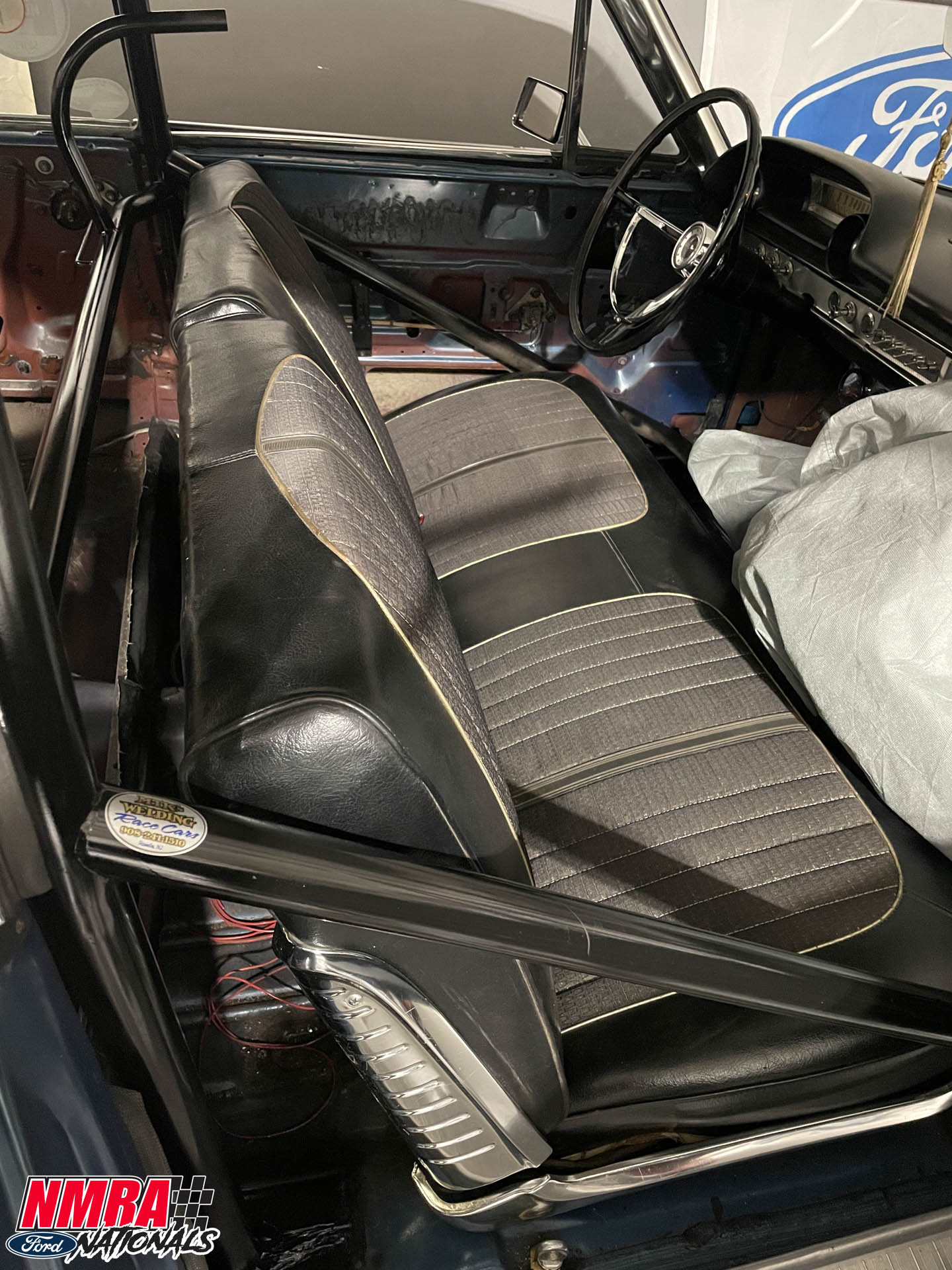