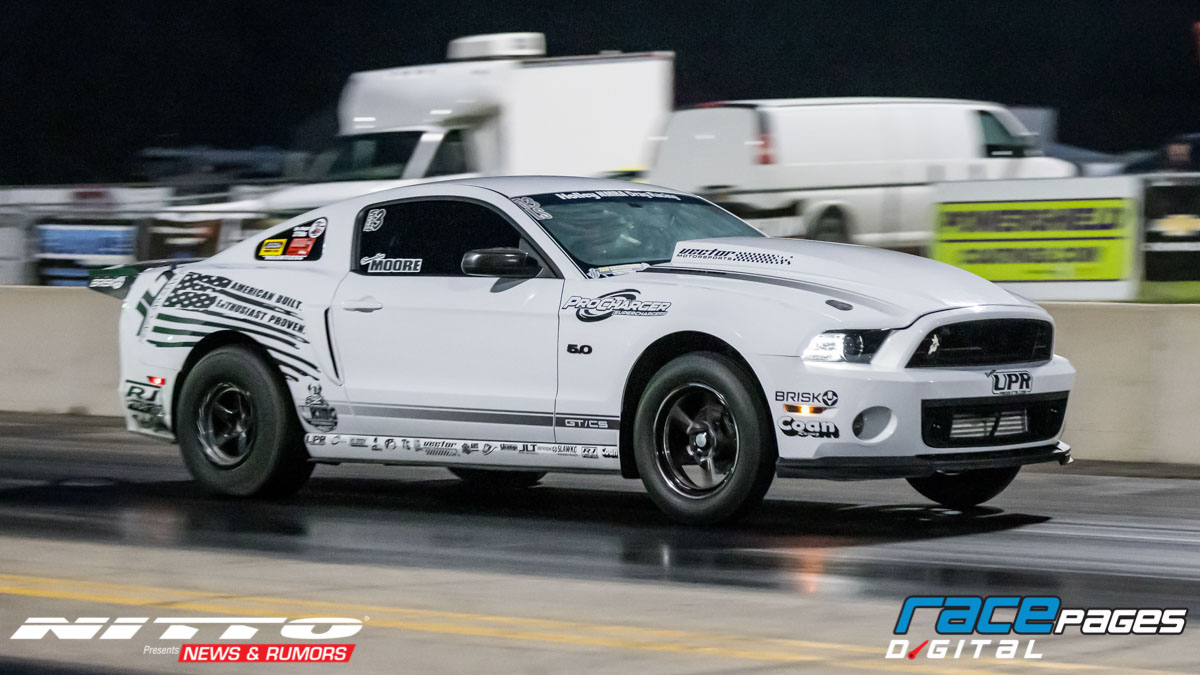 Since the class debuted just a few years ago, the NMRA's JDM Engineering Limited Street has been super competitive, with class runners using nearly every engine/power adder combination to achieve maximum performance. Top contender Samantha Moore, after competing in the class for years with a VMP Supercharger, made a spur-of-the-moment decision and switched her combination to a ProCharger. Just a week prior to the Arrington Performance NMRA/NMCA Power Festival presented by Force Engineering at US 131 Motorsports Park in Martin, Michigan, Moore's new P-1X ProCharger showed up at her Vector Motorsports base of operations, and in the days leading up to the race, she re-engineered several components in the engine bay to accommodate the new boost maker and put a quick tune into the Holley EFI to get it up and running. It was perhaps the best kept secret among NMRA racers going into the race. 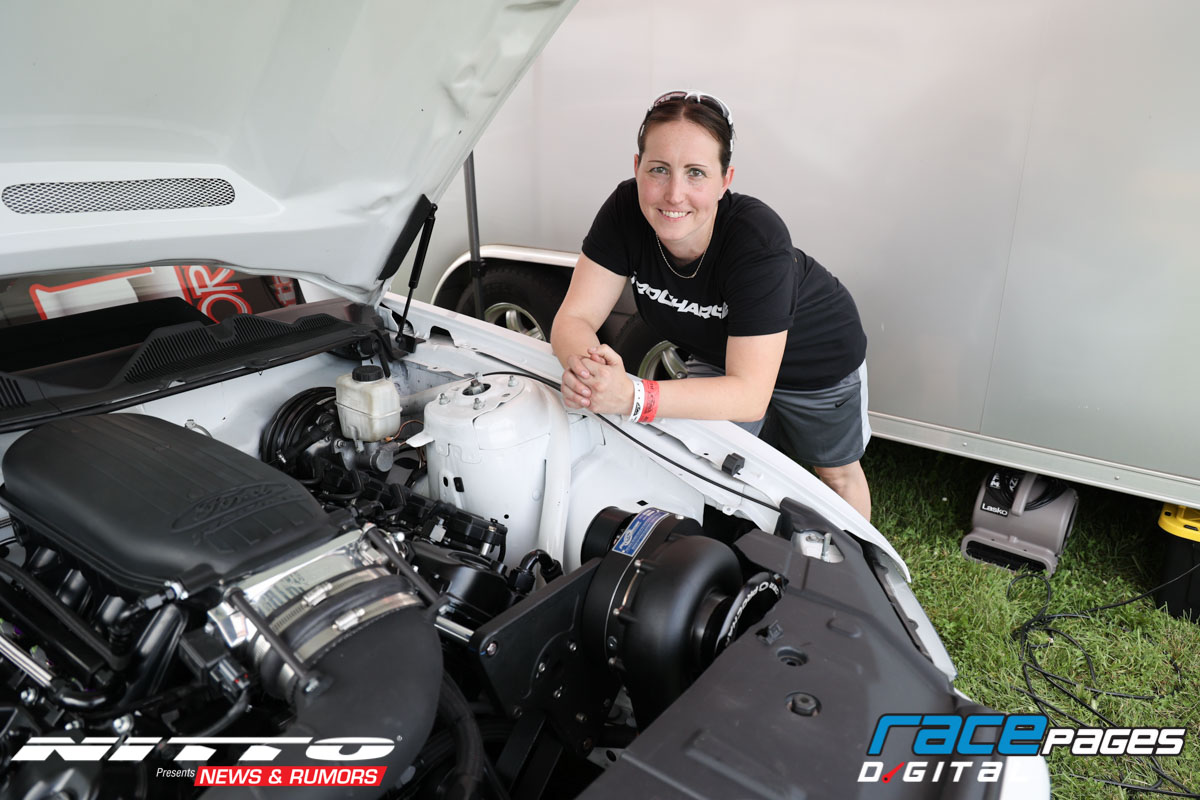 The sudden and secretive change was preceded by a bunch of mayhem for the Michigan-based racer, who at the mid-point of the season was still using her Jokerz-ported, VMP Performance Gen 2 R supercharger. "On Thursday the week before the Norwalk race, I wanted to compare the pulley change after getting hit with a bigger pulley," Moore said of the mid-reason rules revision to her engine/supercharger combination by the NMRA Tech Committee. "Right when I lifted at the top of the pull, the rod came out." Moore thinks that the engine may have been hurt after the St. Louis race, but subsequent compression and leak down tests indicated everything was in good shape. "I'm kind of glad it happened when it did," she added. "If it had happened on track, it would have been at the top end and i probably would have hit the wall." 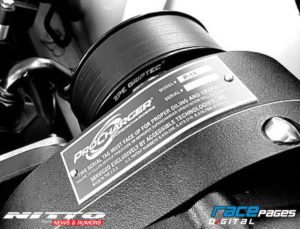 Thinking her season was finished, Moore weighed the option of borrowing a car to gather some points at the next race in Norwalk, but ended up pulling the engine right then and there on the dyno. The damage was not limited to the connecting rod, as the failure wrecked the head, a cam, additional connecting rods, Â pistons, and the engine block. "I thought breaking my the snout off my crank previously was badthis was ugly," Moore told us. Looking around the shop, Moore and her Vector Motorsports business partner, Dan Sienkiewicz, opted to yank the Coyote out of his car, but it needed gone through before using it. To that end, they disassembled the engine and dropped it off to Holbrook Racing Engines, which basically put all of its projects on hold to knock out the machine work on Moore's block and balancing on the rotating assembly in just one daywithout that effort, she likely would not have made the next race. "It was a mad thrash to make Norwalk," Moore explained. "We put the short-block together Tuesday, the long-block on Wednesday, got in the car Thursday to fire it up for five minutes, packed everything up and drove there without any sort of break-in. I did a burnout and sent it." The engine survived for a bit, but Moore leaned a bit hard on the tuneup to push the supercharger with the new pulley combination and the result was more engine work. Regrouping for the next race, the Arrington Performance NMRA/NMCA Power Festival presented by Force Engineering, Moore had several companies that helped her out in a relatively short amount of time and facilitated the building of a new engine. "MPR got me the 2020 GT500 Engine block and put the Darton Sleeves in it, and Holbrook got me the unobtanium parts like the billet Bryant crank, Callies Ultra Rods, main stud kit, head gaskets etc., and completed the finishing machine work on the block and balancing in one day again. JE Pistons sent me a new set of pistons in 2 weeks, Slawko repaired the damaged head, and Comp Cams sent me a replacement custom grind cam. Then we at VMS built the motor in house like we always do."Â And shortly after that thrash is where things took a hard left turn in the power adder department. "No one ran the P-1x because they didn't think it was competitive," Moore explained. "ProCharger didn't know class-wise what it could do. We are a dealer and run them on a lot of customer cars. I also wanted to do something totally different and prove I could do it. I looked at how I tune the car and run the car, and the P-1X seemed like the better idea, and biggest statement maker!" 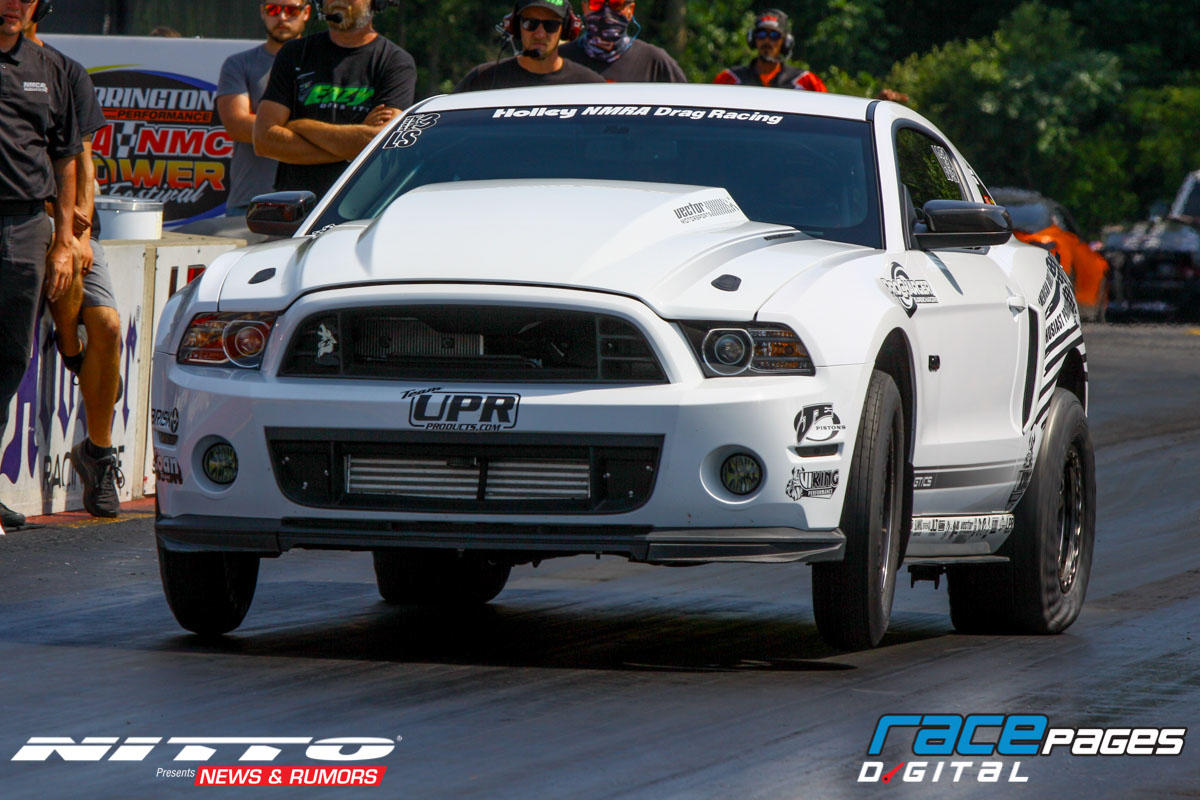 While Moore made a number of changes to her California Special Mustang in the off season that made it more of a race car than the street car it was, the ProCharger kit is nothing more than a standard P-1X system for a 2011-2014, Coyote-Powered Mustang. The entire switch was kept secret and after Moore made the necessary changes to the engine bay components to fit the new centrifugal supercharger, she performed a basic tune on the dyno. "Me and my dyno don't have a great relationship after throwing a rod. I did a short A-to-B pull to 7,200 rpm and it was very impressive. That dyno is bad luck for me, though. I run it daily with customer cars without issue, but mine, nope. I'm more confident sending it down the track and tuning it there." With not a full dyno pull nor a pass down the track, Moore showed up at US 131 Motorsports Park for the event, sending out a teaser photo on social media early in the weekend. It wasn't long before everyone was hunting her down in the pits to see if the image was legit. Not thinking it was ready to let loose just yet, Moore and Sienkiewicz staged the California Special for its first pass down the track during a test-and-tune session, and the car's 8.36 at 166mph pass surprised everyone. She followed that up with an 8.38 in qualifying to take the top spot. "It was the worst race to switch to air-to-air intercooler based on the weather we had," Moore quipped. Indeed it was, as many racers made note of the density altitude numbers that hovered in the 3,500-4,000 range throughout the weekend. 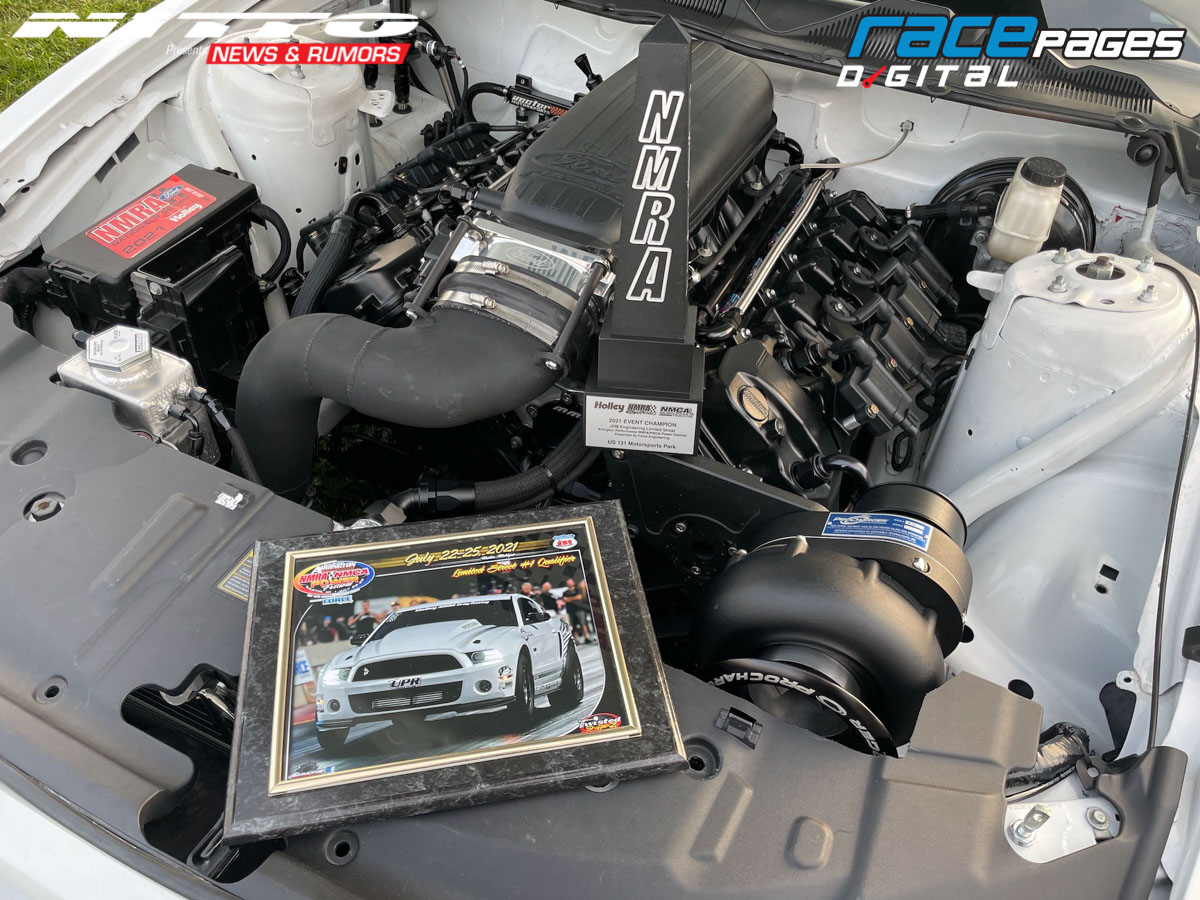 Throughout the weekend, Moore looked to improve the car's performance, noting that it felt lazy as the engine RPM rose on the transbrake. "It acts like a turbo car when you put it on the transbrake. I added a bump button in the pits and tried that out during qualifying to try and get the engine "spooled" up." Despite that issue, Moore proceeded to win round after round in eliminations, and claimed the class winas well as ProCharger's first win in the classby the weekend's conclusion. "I don't think there is anything left in it," said Moore of the new combination. While she would like to play with new cam profiles that might be better suited to the centrifugal blower, the racing budget is blown for the season. Moore is, however, working with Jason Coan at Coan Engineering, who stepped in to sponsor her on the transmission side and is working on a new, looser torque converter for her new application in preparation for the final round of the 2021 Holley NMRA Drag Racing season. While discussing sponsorships, goals, and intentions with ProCharger, Moore made some bold predictions and as it turned out, held true to them. "I told ProCharger that I was going to qualify number 1, and that I want to win and was going to try to," Moore told us. "I knew we were smart enough as a team to get it figured out quickly. I can't believe what that little thing did. I have an F-1x on my Camaro and the P-1X was so small. I am impressed and need to throw a big thank you to ProCharger for believing in me and supporting me!" And if that effort doesn't show you how competitive Samantha Moore is, this should prove it. While she was engineering the fitment of the ProCharger, she also made sure that she could swap out the superchargers if needed. "I have the Magnuson/VMP Gen3R 2.65-liter, the Jokerz-ported Gen2R 2.3-liter TVS, a D-1SC ProCharger and the P-1x, and I'm bringing all of them with me. Everything is easily interchangeable.Â The car's name is Relentless, for many reasons, but one of those reasons is that I am relentless in pushing myself, my car and my team to win!"
Coyote 5.0