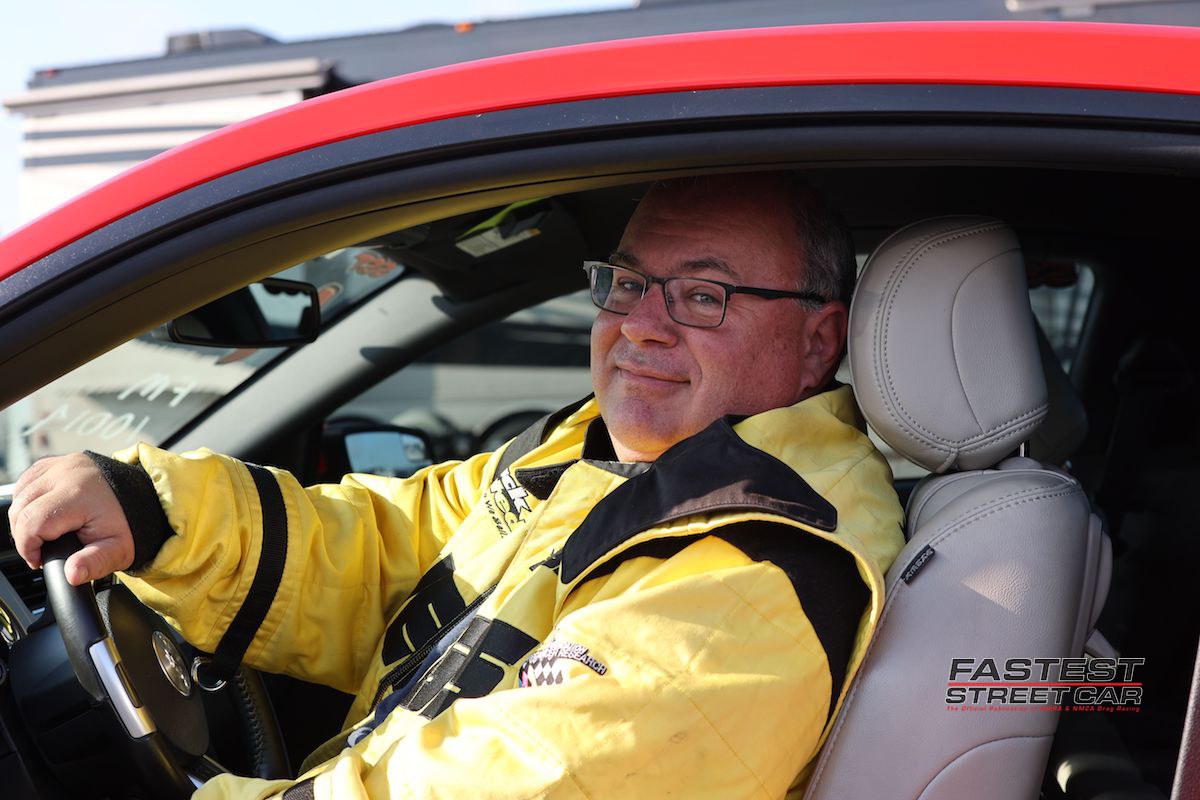 Interview by Mary Lendzion Photos by Steve Turner and FSC Staff Kevin McKenna has been interested in racing and race cars for as long as he can remember. As a writer and editor for National Dragster and NHRA.com, he has been involved and immersed in motorsports for many years. So has his wife, Jill McKenna, who suggested they buy a Mustang when they moved from California to Indiana several years ago. Kevin drives the red 2014 Mustang to NMRA events across the country to compete in HP Tuners Super Stang, where he clocks high 10-second passes with a Coyote engine and VMP supercharger. He puts more than 2,000 miles on the car's odometer to get to and from the first, and farthest, event of each year, which is at Bradenton Motorsports Park in Florida. That's fine with him, as he wants to keep the car on the street and out of the trailer. He's successful with his set up, as he secured the 2020 HP Tuners Super Stang championship, and while he plans to attend all of the events on this year's NMRA tour, he won't allow himself to feel pressure to back up his championship. In fact, for extra fun, in addition to HP Tuners Super Stang, he might also compete in Race Pages Digital Ford Muscle at combined NMRA/NMCA events. Read on for more about Kevin, who enjoys traveling with Jill, and considers Sweden, France and England to be among his favorite destinations so far. He also goes to concerts and baseball games, and is a Chicago Cubs fan. 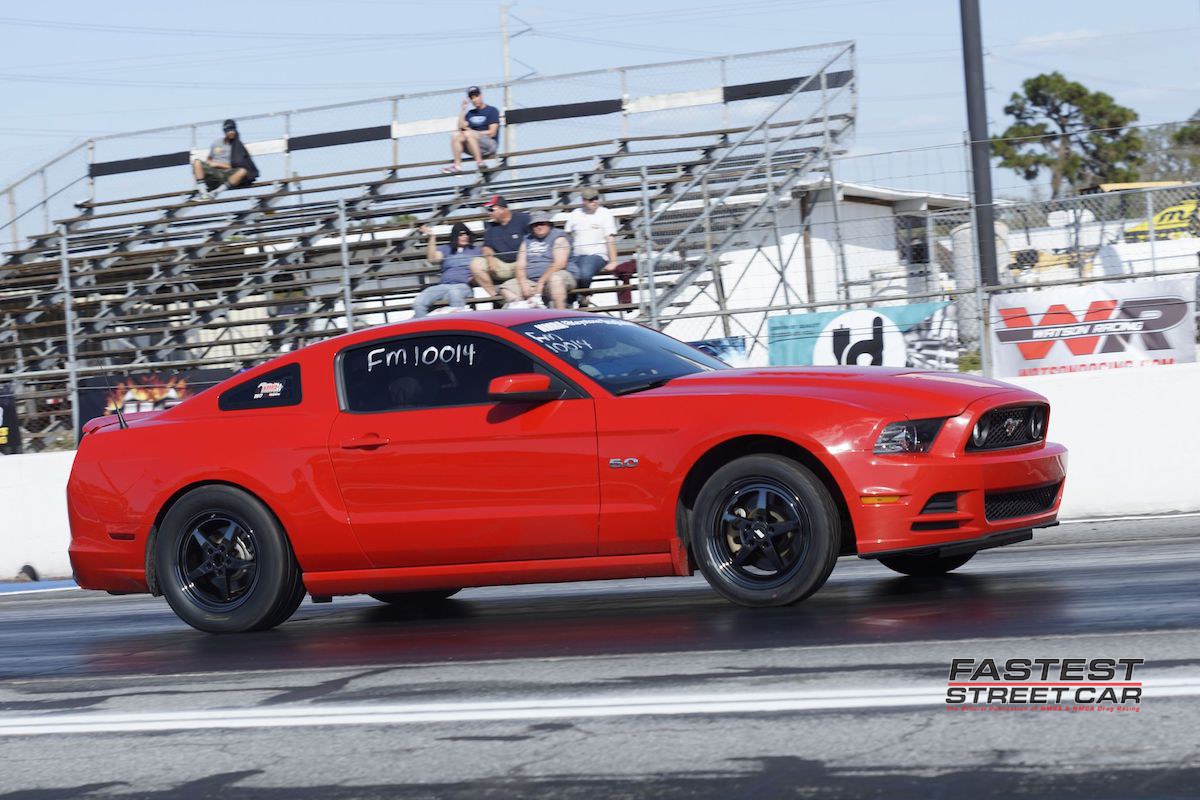 WHAT INSPIRED YOU TO PURCHASE YOUR MUSTANG When my wife, Jill, and I moved from California to Indiana, she said that since we were going to be living in a state that gets so cold, we should at least have a race car, and I agreed. We were living in Indiana for about six months when we went to a dealership in South Bend, two hours from us, and traded in our Audi for the 2014 Mustang with a Coyote engine. It seemed like a good choice for something we could both drive on the street and race at the track. I raced it in stock form for a year or two. I entered NMRA Ford Muscle for the first time in 2017. WHAT PROMPTED YOU TO TRY HP TUNERS SUPER STANG FOR ONE EVENT IN 2019, AND THEN MAKE THE MOVE TO THE CATEGORY IN 2020 We struggled in Ford Muscle a little because of the sportsman tree, and I found it difficult to be consistent on the starting line. On a whim, I thought I would try something different, and the pro tree in Super Stang made all the difference. I became more consistent on the starting line, and my car seemed to like it, too. The class was a better fit for me, and in 2020, I committed to running it for the full season. I felt right away that I had made the right decision, even though the driving part continues to be a work in progress, because I could see all of the potential. IT'S IMPORTANT TO YOU THAT YOU DRIVE THE MUSTANG ON THE STREET AND TO AND FROM EVENTS. IT HAS NEVER BEEN IN OR ON A TRAILER, RIGHT No, it really hasn't. In addition to being important to me, I have no desire to own a truck or trailer. It's better for me to drive the car to events, swap the tires and race. I like to show that you can have a car that's competitive on the strip but is also legal for the street. It's also more economical for me. We're budget-minded with everything we have done with the car, and it shows that someone can duplicate it for not a lot of money, and that racing really is a sport for everyone. 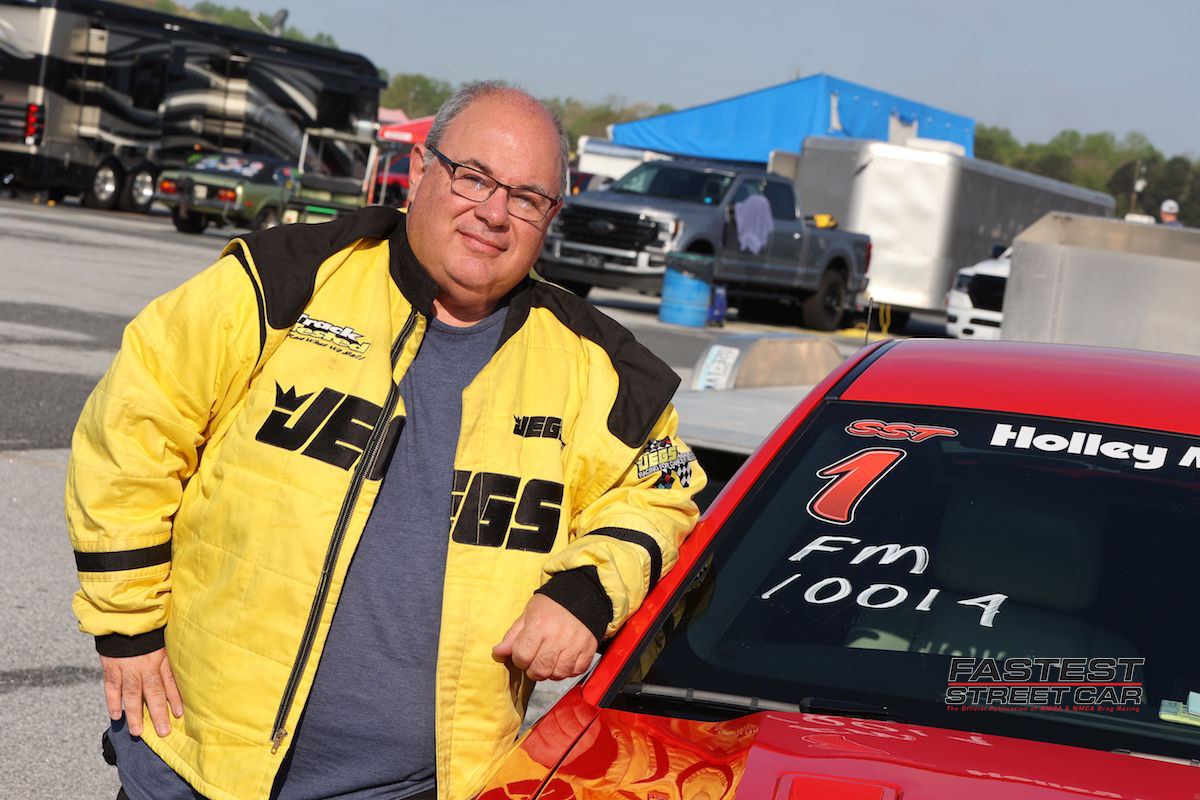 WHAT MODIFICATIONS HAVE YOU MADE TO THE CAR THROUGH THE YEARS At first, we made only minor modifications to the car. We started with wheels and tires from JMS and Mickey Thompson, and then we put the VMP supercharger on the stock Coyote engine in 2018. We now have a carbon fiber driveshaft from QA1, FTI converter and BMR suspension, which made a big difference in consistency. The car rides a little firmer now, but it's still fine for the street. In fact, I've put more than 2,000 miles on it since January, mostly from driving it to Florida for the first event of the year, and then to Georgia for the second event of the year. There were 7,500 miles on the odometer when I bought the car, and 20,000 when we put the VMP supercharger on it, but there are 40,000 miles on it now. DO YOU FEEL THAT THE CAR HAS EXCEEDED SOME EXPECTATIONS Yes, I definitely do. The car fires up, gets 20 miles per gallon and has done more than many people thought it could. I hope it has inspired some people who were on the fence about racing their street car to see that they can actually race their street car without going to great lengths. YOU HAVE SAID THAT YOU DIDN'T EXPECT TO EARN THE 2020 HP TUNERS SUPER STANG CHAMPIONSHIP. WAS THAT BECAUSE OF THE LEVEL OF COMPETITION OR THE COMMITMENT INVOLVED A little of both. I didn't think I would be in a position to run all of the NMRA events last year, let alone earn a championship, which is probably good because it meant I didn't feel all of that pressure. Racing in that category is not easy, and it wasn't until the last event of the year that I realized I really had a chance at earning the championship. Many years ago, I got to write the How to Drag Race book, and I had a lot of fun talking to racers for that. At the time, I didn't have a tremendous amount of experience, and maybe some people thought it was odd that I wrote that book, so hopefully earning the championship helped me have some credibility. DO YOU SEE YOURSELF STAYING IN HP TUNERS SUPER STANG, OR MOVING TO ANOTHER CATEGORY AT SOME POINT I think that Super Stang is the best category for my car, and I'm fine with that because I'm happy. I like Super Stang, and I like the racers in Super Stang. It's a good group. I suppose I could decide to make changes to my car and try another category, but right now, I'm very content. I would like to go some rounds and win some races this year, but if I don't earn another championship, that's fine. 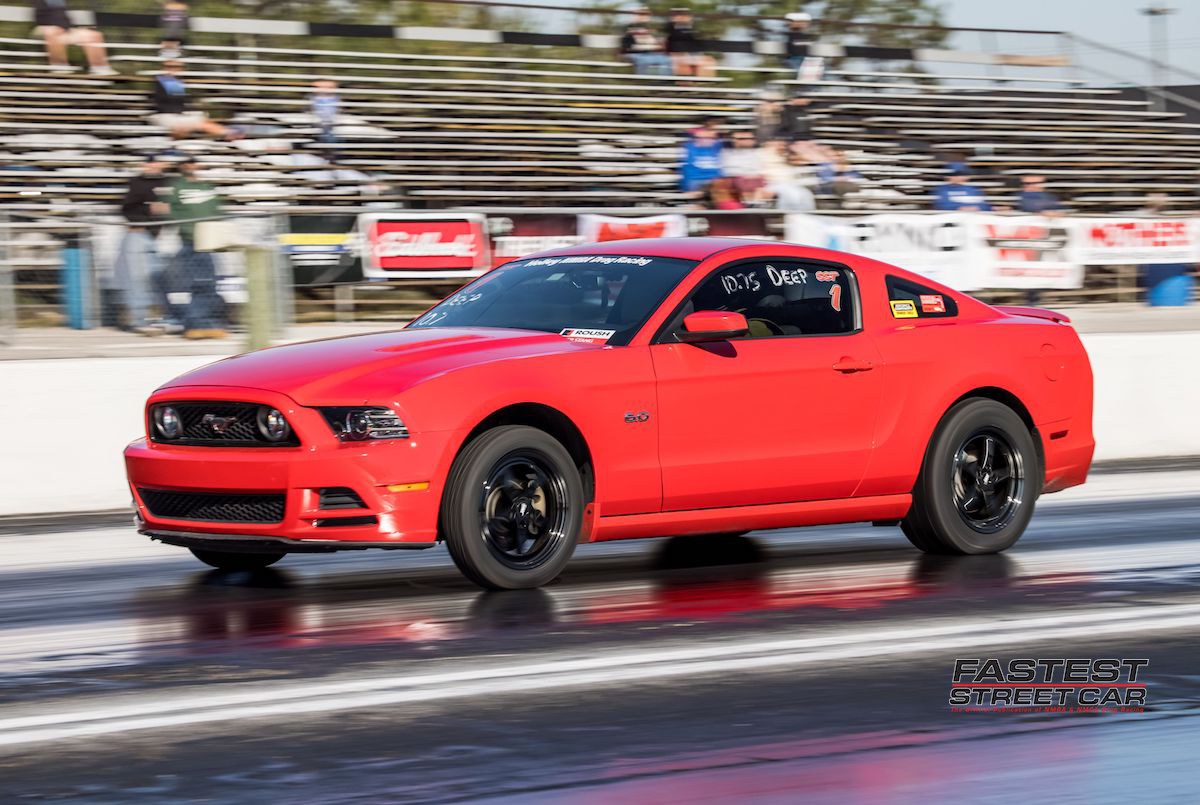 WHAT ARE YOUR RESPONSIBILITIES AT NHRA.com AND NATIONAL DRAGSTER I'm a senior editor for National Dragster and NHRA.com, so I split my time between the magazine and the website. I've basically been there since I was a kid. I write features and race coverage, and I do statistics. I enjoy doing it now as much as the day I was hired. It has been a nice gig, and it has afforded Jill and me a pretty nice lifestyle. I hope to be able to ride it out until the finish line and retire from there. YOUR WIFE, JILL, IS ALSO VERY INVOLVED IN THE MOTORSPORTS INDUSTRY, ISN'T SHE Yes, she is, and it's really great. We go back a long way. We met at an NHRA event in the late 1990s. I was working it, and she was there with her father and sister. Jill was actually the first NHRA Junior Dragster racer. We dated long-distance for a while, with me in California for NHRA and her in New Jersey, and then she got the opportunity to move to California. I see racers whose spouses are not into it, and for me, that would be a problem because I'm around it all of the time. I'm glad that she's into racing, and she has even raced the car a couple times, including at an NHRA event. She doesn't get to go to many NMRA events, but she was at the NMRA event in Bowling Green last year when I earned the championship, and that was really special to me. IN ADDITION TO JILL, WHO SUPPORTS YOU ALONG THE WAY I have support from VMP Superchargers, JMS Chip, QA-1 Performance, JEGS Mail Order, Mickey Thompson, FTI Converters, JLT Performance, Stiffler's, Dennis Ramsey Performance and REVan Media. And, after earning the championship, I was able to welcome Nitro Fish, AA Auto Salvage, FatHeadz Eyewear and Coastal Dyno in Tampa, which I'm really happy about. (Interview in the July 2021 issue of Fastest Street Car) 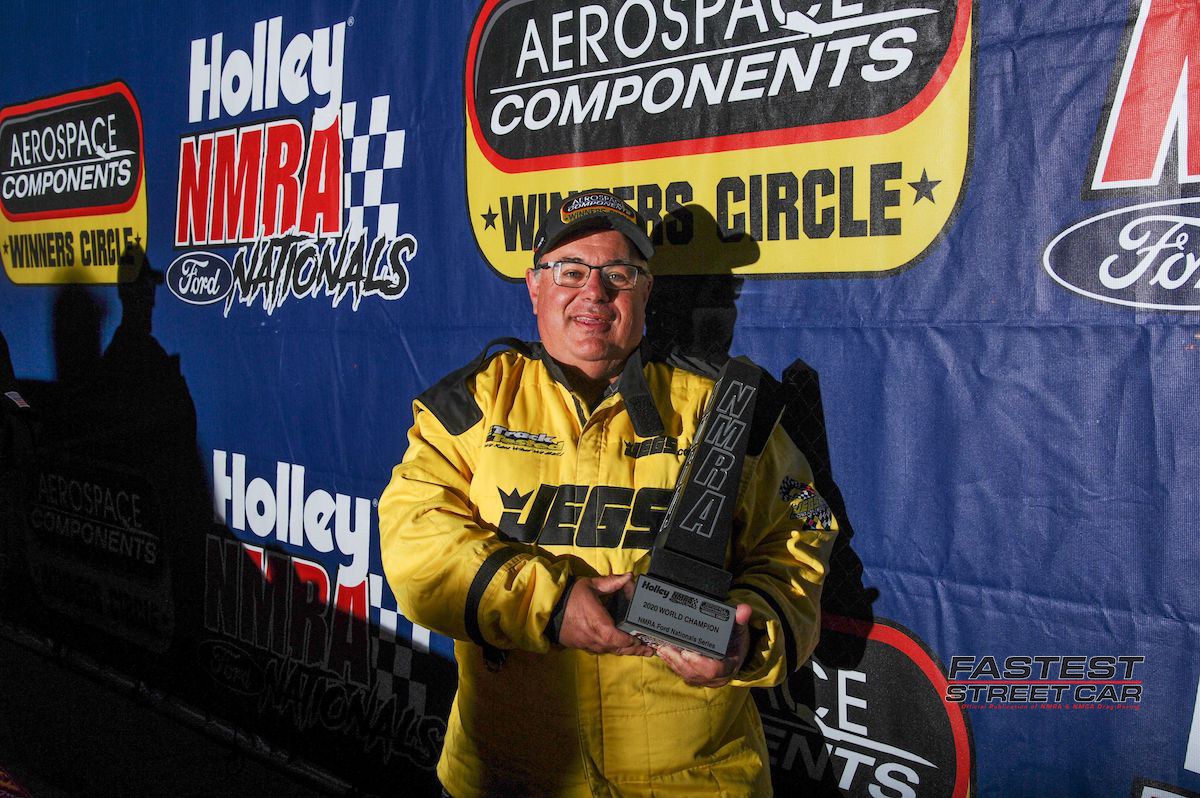