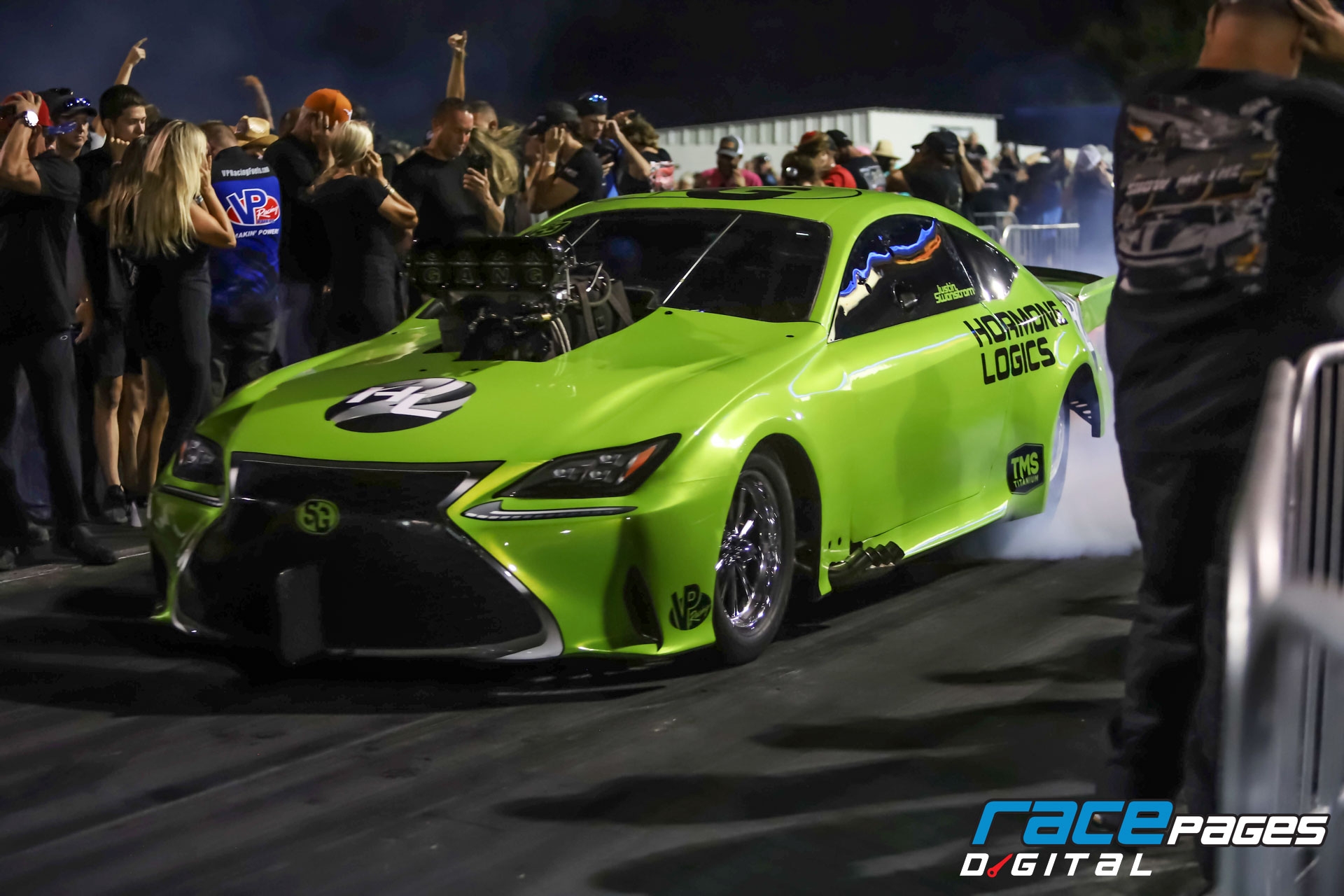 Tulsa Raceway Park had a very different feel this past weekend for Street Outlaws: No Prep Kings. It was different in that there were no film cameras rolling. There weren't production crews running everywhere on golf carts. No film crew means this episode will probably never air. Most of the crew went home early due to the sudden loss of a beloved member of their team Friday morning. Many of the racers have posted tributes to him on their social media pages. He was affectionately known as Mike, Mike, Mike, and he will be missed by all who knew him.

With the loss of Street Outlaws producer Mike Helmann weighing heavily on everyone, it was decided that this would not be a points race, it was just for the money. The Friday night lineup was mostly the same. There were a few grudge races, and the Great Eight race was still run. The top eight drivers in points run for $15,000. Scott Taylor and Lizzy Musi were the first pair down. Musi came up with the win.

Kye Kelley debuted his newly built Shocker in the second pairing against Justin Swanstrom, in his newly redesigned Lexus affectionately known as Prenup. Swanstrom won the battle to the stripe. Jerry Bird faced off with “Daddy Dave” Comstock to be the third pair down, with Comstock taking the victory. The last pair of first round was Ryan Martin and Jeff Lutz. Martin, the current points leader, was the quicker man in that face off. In the final round, Martin raced his way to the purse, beating Comstock in the finals. Another point of interest for anyone following No Prep Kings was the fact that Alex Laughlin finally made his No Prep Kings debut. He brought out his screw-blown radial car in full radial trim. It was on a “small” big tire. Laughlin, who runs NHRA Top Fuel, plans on running as many Street Outlaws: No Prep Kings events as his schedule will allow for the remainder of the season. It looks like that will be Tucson and Denver for this year, since he has a full schedule running NHRA Top Fuel, NHRA Pro Stock, radial races, go cart, and off-road races.

Saturday was HOT in Tulsa! Track temp at one point was 146. Racing action was hot too. Farmtruck and AZN brought the Locals Only small-tire action for $5,000. In the finals, Jake Mason in his ProCharger 1967 Camaro faced off with Shaun Martin in his turbocharged 1994 “The Skunk” Mustang. Martin took the win, and negotiated with Street Outlaw Scott Taylor for five car lengths and the hit for an additional $5,000. Martin made it to the stripe first to grab the extra cash. In Future Street Outlaws, the “Bad Fish” Barracuda driven by Marty Robertson defeated Brent Austin (Exodus). This was his second win in a row in the future class. Brandon Sandlian in Junkyard Stude was the last man standing in Outlaw Big Tire. He defeated Eddie Rogers in the Chevelle from Hell. The Invitational race on Saturday was missing a couple familiar faces. Tony McKinney roasted his motor in his grudge match on Friday night. Originally, they thought it may have dropped a valve, but the damage was much worse, so he headed home to get a jump on repairs. Jeff Lutz was also noticeably missing from the invitational field. Small tire winner on both Friday and Saturday night was Brent Self in his ProCharger Camaro.

Invitational action ramped up in round two as Stan Allen (Team Tropical Thunder) broke giving, Jerry Bird a competition bye. Mike Bowman and Larry Larson were up next, but Bowman couldn't make the call giving Larson an automatic pass to round three.  Probably the biggest upset of the day was the third pair in round two. Shawn Wilhoit knocked off Ryan Martin to move on to the next round. In round three, the left lane was the dominant one by far. All four races were won there. Dave Comstock, Lizzy Musi, Shawn Wilhoit, and Justin Swanstrom all advanced to the semi-finals. Semi-final matches were set with Musi facing Wilhoit, and Swanstrom taking on Comstock. Wilhoit beat himself when he went red to give Musi a pass to the finals. Swanstrom edged out Comstock to secure his place in the finals as well. The final match of the night ended with Swanstrom as the victor.

The Tulsa heat was no joke, and track staff responded to an astounding  amount of heat related incidents. The crowd was huge, and was lots of fun. In some of the down time, Chris “Boosted GT” Hamilton always keeps the crowd entertained. Whether it be with dad jokes or the t-shirt cannon, it's always a good time. John Odom, newcomer this season, gifted a couple people with some extra cheer as he stuffed some cash in a few shirts. Between the cash in shirts, and wedding proposals, a good time was had by all.