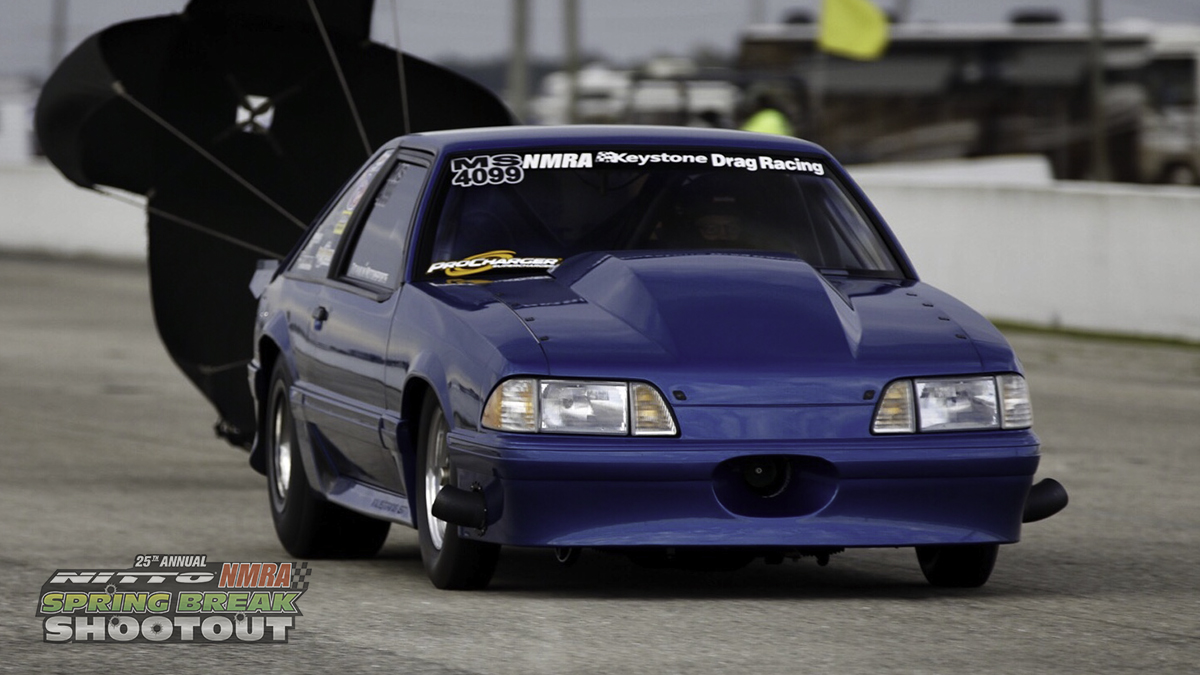 New for the 2019 NMRA drag racing season is the ProCharger Modified Street class and as a new class, everyone has been watching the scoreboards during testing to see who is going to set the bar for the weekend. Charlie Booze with his naturally aspirated combination clicked off an 8.09 run during testing on Thursday, but it was the ProCharged GT of Bob Cook that really got everyone's attention after logging an 7.94 at 174 mph. "I am building a Renegade motor for the car, but as the rules came together for Modified Street in the offseason, it was a no brainer for us to change the blower and jump in," Cook explained. He isn't giving up on the other engine combination, though, as he said he might use it to run Xtreme Street at some NMCA races. 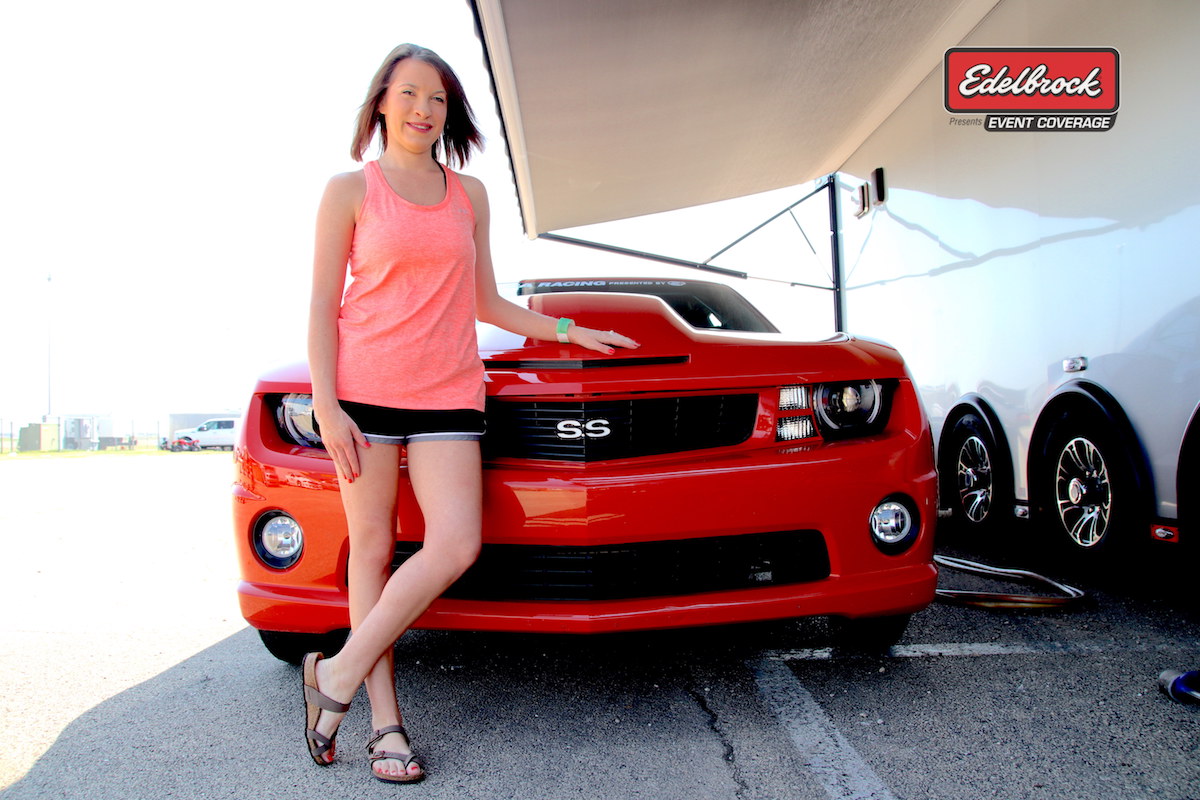 Making the jump up to Edelbrock Renegade this season, the Hellion B-Teams Haley James brought a completely refreshed combo. Underneath its fresh wrap the 93 LX features as many carbon-fiber body panels as possible and revamped chassis courtesy 4th Dimension Performance Fabrication. Its B-Team-built Coyote is based on an MMR sleeved block topped by Voodoo heads. Controlled by a Motec EFI system, the C85-burning turbo combo keeps the temps cool with an air-to-water intake. So far it is working, as Haley ran a 4.81 at 146.65 to top qualifying in round one, and her team is set on not only winning, but collecting a record along the way. 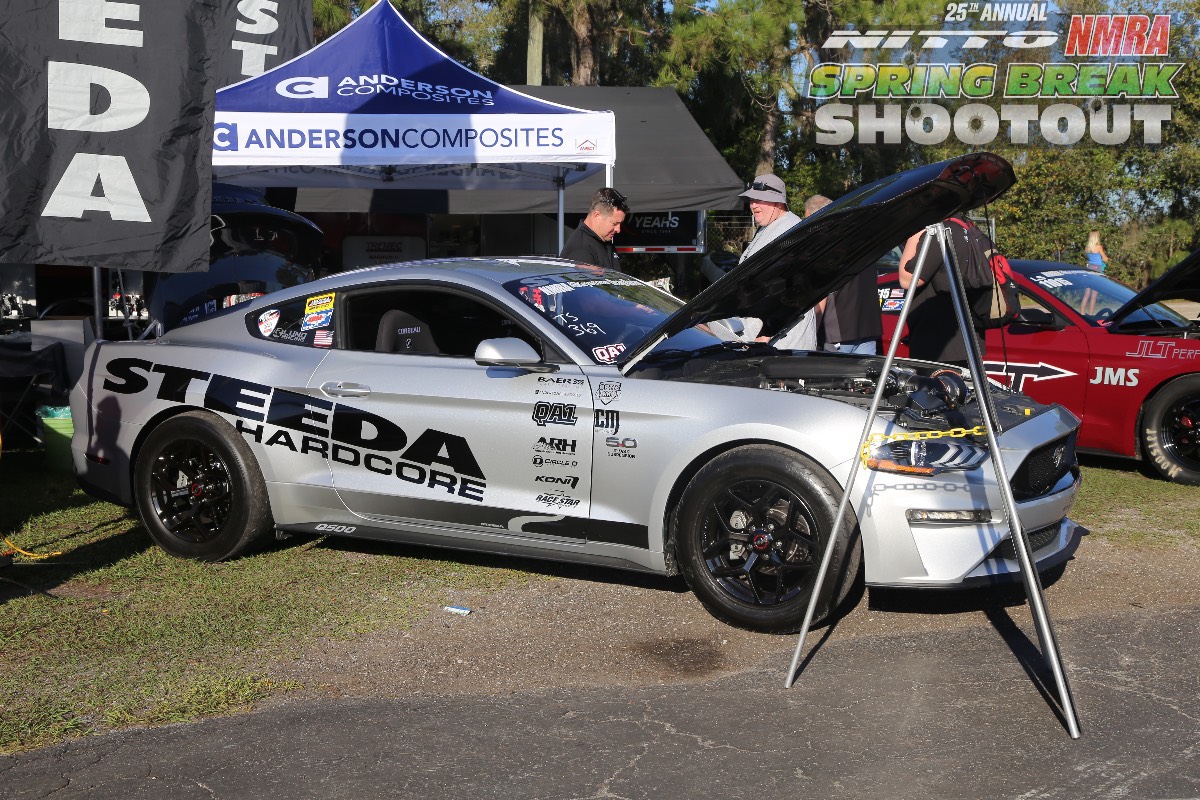 Steedas Scott Boda returned to NMRA action in the companys naturally aspirated Silver Bullet 2018 Mustang, which received a number of upgrades since last season. He is hoping to sneak in the10.40s in the warm weather thanks to weight loss program courtesy of Optic Armor windows and Anderson Composites carbon fiber body parts. The Lund Racing-tuned ride also benefits from a Bret Barber-ported Cobra Jet intake, new double-adjustable rears shocks, and a torque converter from Circle D. 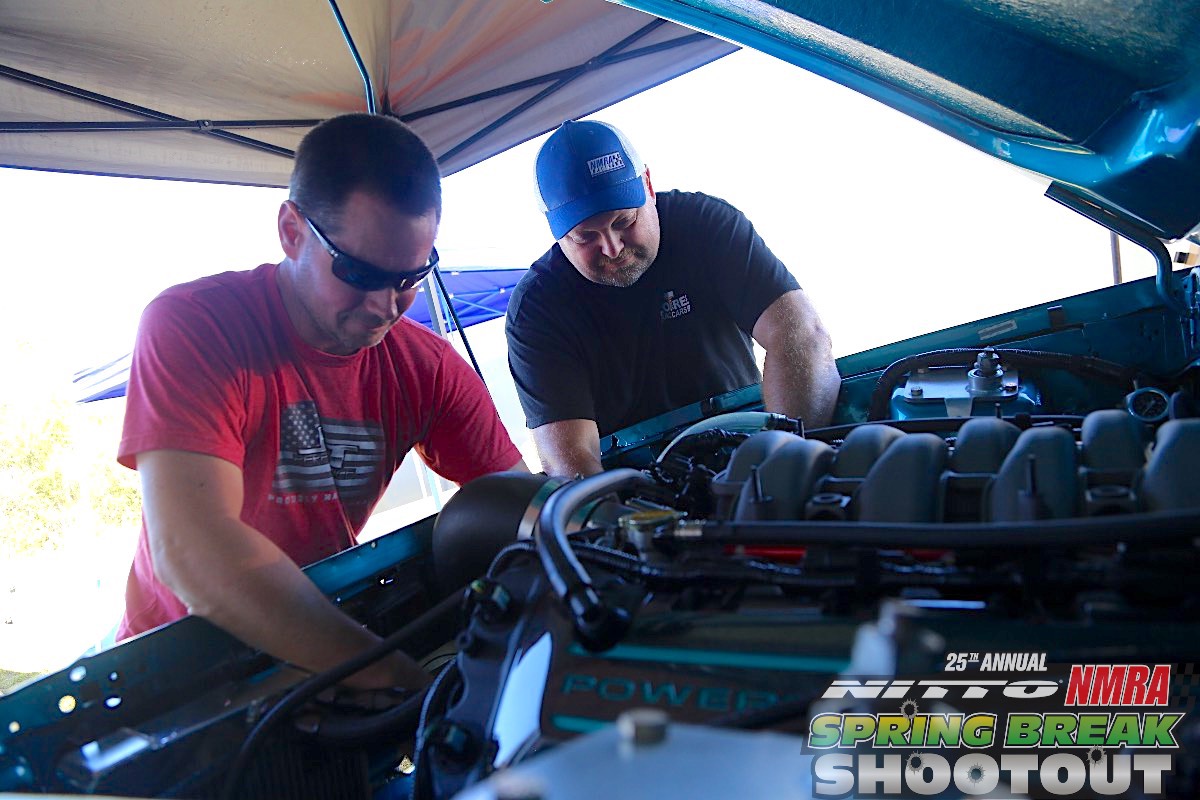 On Friday Darin Hendricks once again topped the G-Force Racing Transmissions Coyote Stock qualifying in his 1993 Mustang Cobra thanks to a 10.22 at 130.87 rip. Unchanged from last seasons combination, right down to the slicks and clutch he ran at the World Finals in Bowling Green, this machine is reaching for more traction, but it has the potential to run in the teens should things come together. After breaking a timing chain, Justin Jordans 2014 Mustang returned to Hellion Turbo Battle competition thanks to an assist from the MPR Racing Engines crew. However, when he made another pass things didnt go as planned. A fresh silicone coupler blew off during the run, so he called in the boosted racers best friend Aquanet hairspray. What once kept the hair of 80s rockers sky high now helps hold silicone couplers in place. That really is Extra Super Hold, as he moved up to the top qualified spot in the second round thanks to a 7.29 at 195.14. 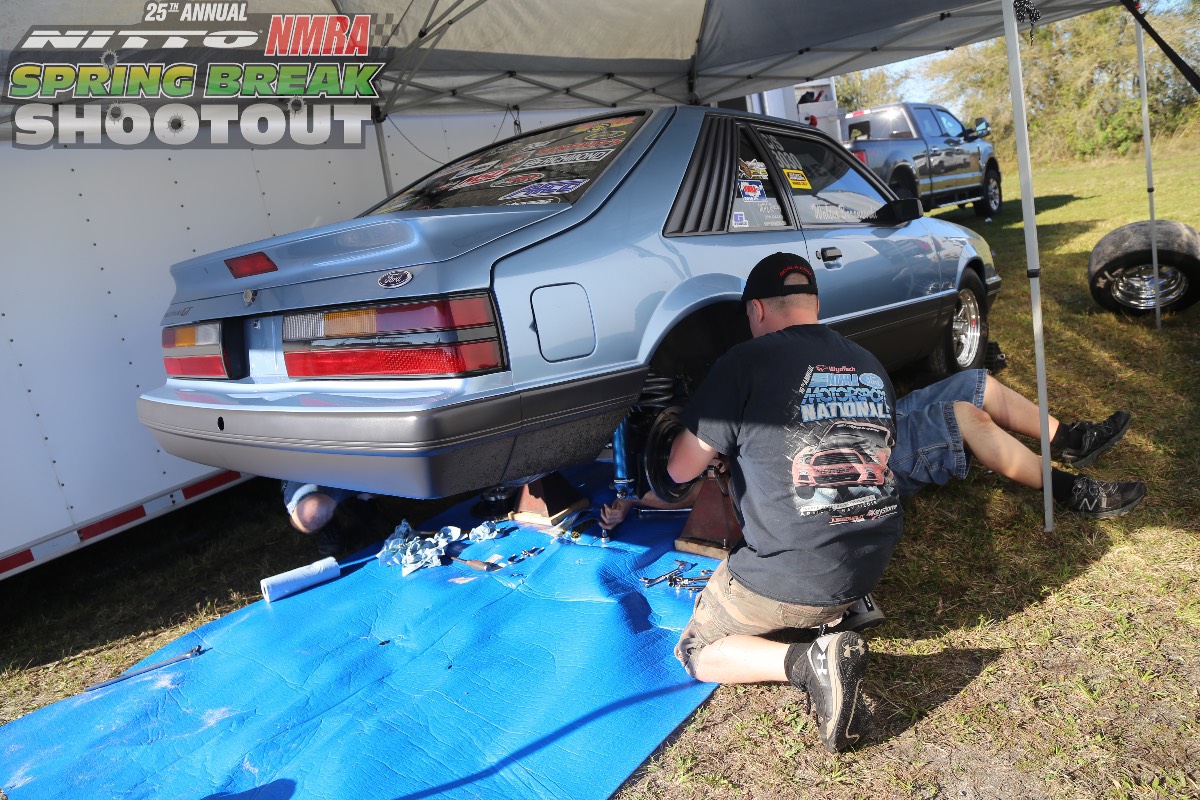 Walter Baranowski came into the race with a new gear setup and some lighter Strange brakes up front, but it didnt respond to the gear ratio change. As such, he and his team were swapping gears looking to pick up a tenth or so and move up the G-Force Racing Transmissions Coyote Stock qualifying ranks from the initial fifth-place ranking. 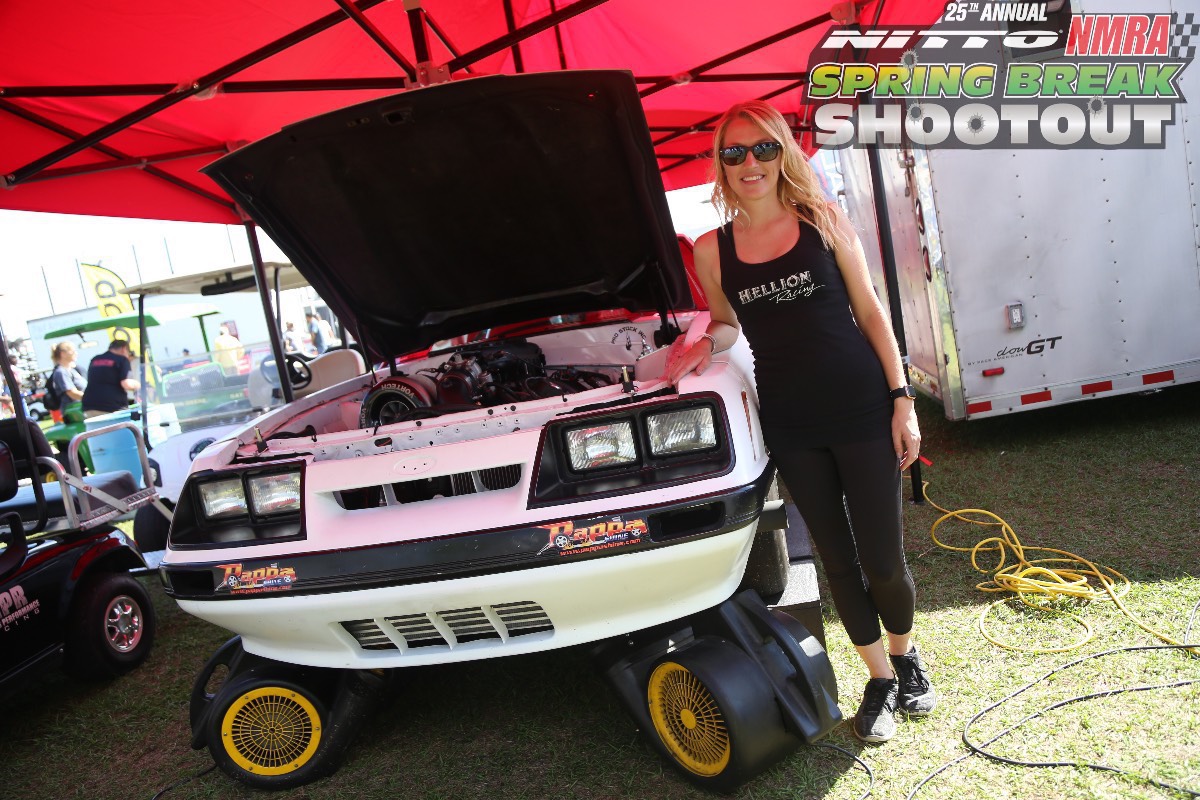 As change of pace Sondra Leslie arrived at the 25th Annual Nitto NMRA Spring Break Shootout fully prepared with a tested car and it showed. She topped the qualifying in the second round with blistering 8.90 at 155.52. She tweaked her Palm Beach Dyno-tuned four-eye Fox in the off-season with a larger blower pulley, a bigger Rarefab intercooler, a freshened MPR Racing Engines Coyote, and a refreshed Ultimate torque converter. 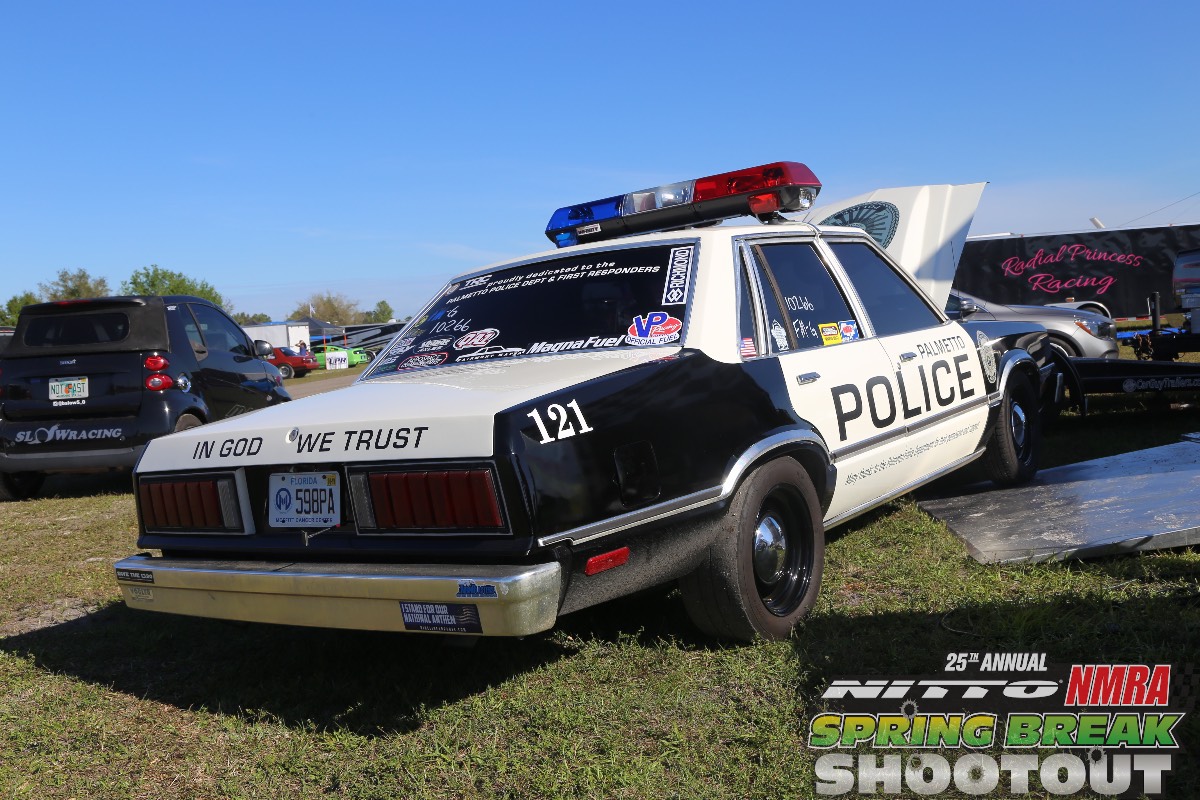 How cool is Bill Lee Jr.s Ford Fairmont cop car clone After crashing last year and totaling his law enforcement-style racer, his supporters at the Palmetto Police Department encouraged him to build a new car. Lee tracked down this ride in Tennessee and had it remade in the period-correct image of a police car. Fortunately most of the drivetrain from his old car survived, so he swapped the 351W/Powerglide combo in. Not only is this car tagged and insured, but Bill says it is a proven winner from previous events and debuted in NMRA competition this weekend at the Nitto NMRA Spring Break Shootout. Hellion Power Systems John Urist has a long history of pushing the envelope in VP Racing Fuels Street Outlaw, but to enter the season he is bringing IMSA/Le Mans endurance racing-level technology to the drag strip. With the assistance of Bosch and Uwe Ostmann of Xtreme-DI his S550 is now running a high-pressure port/direct injection setup, which is similar to the dual-fuel setup in the latest production Mustangs, but with high pressure on the port side as well. In this arrangement a Weldon pump feeds four of Xtreme-DIs high-pressure fuel pumps that feed eight port injectors and eight direct injectors, which are run by Bosch ECUs that keep tabs on the setup via nine wideband oxygen sensors, eight exhaust gas temperature sensors, and four knock sensors. The combo runs a smaller turbo this season, but the new combo should deliver similar performance as compared to last years big turbo. 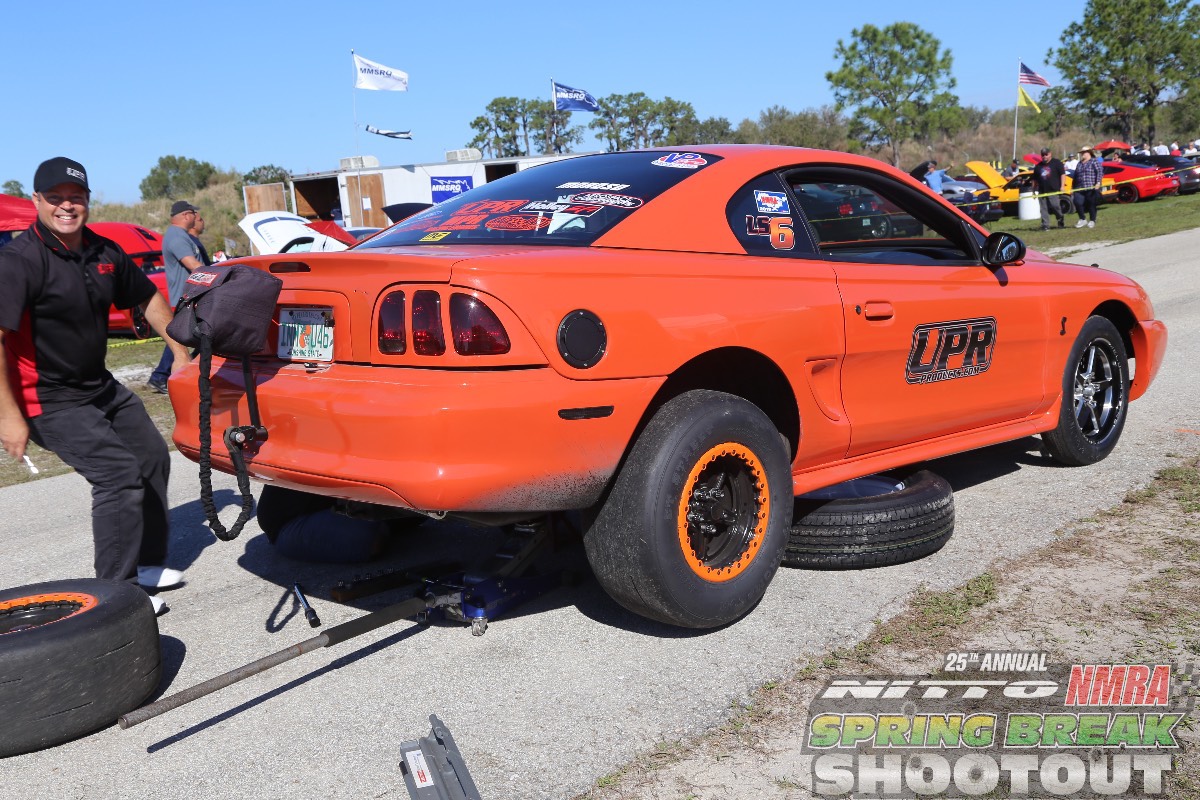 This UPR Products-backed SN95 piloted by Bill Putnam headed into Limited Street competition with a new combo, but it has an 8-second track record. Sporting a VMP Performance TVS blower boosting an all-out MPR Racing Engine Coyote 5.0-liter backed by a Gates Turbo 400 tranny, the car was riding too low, so they were dialing in the springs to adjust for the class weight mandates in hopes of running stronger. The team predicts that by seasons end it will be one of the quickest cars in the category. You never know what you might find in the swap meet at the 25th Annual Nitto NMRA Spring Break Shootout. If you want to piece together an S197 or repair a quarter panel, the parts were on hand. 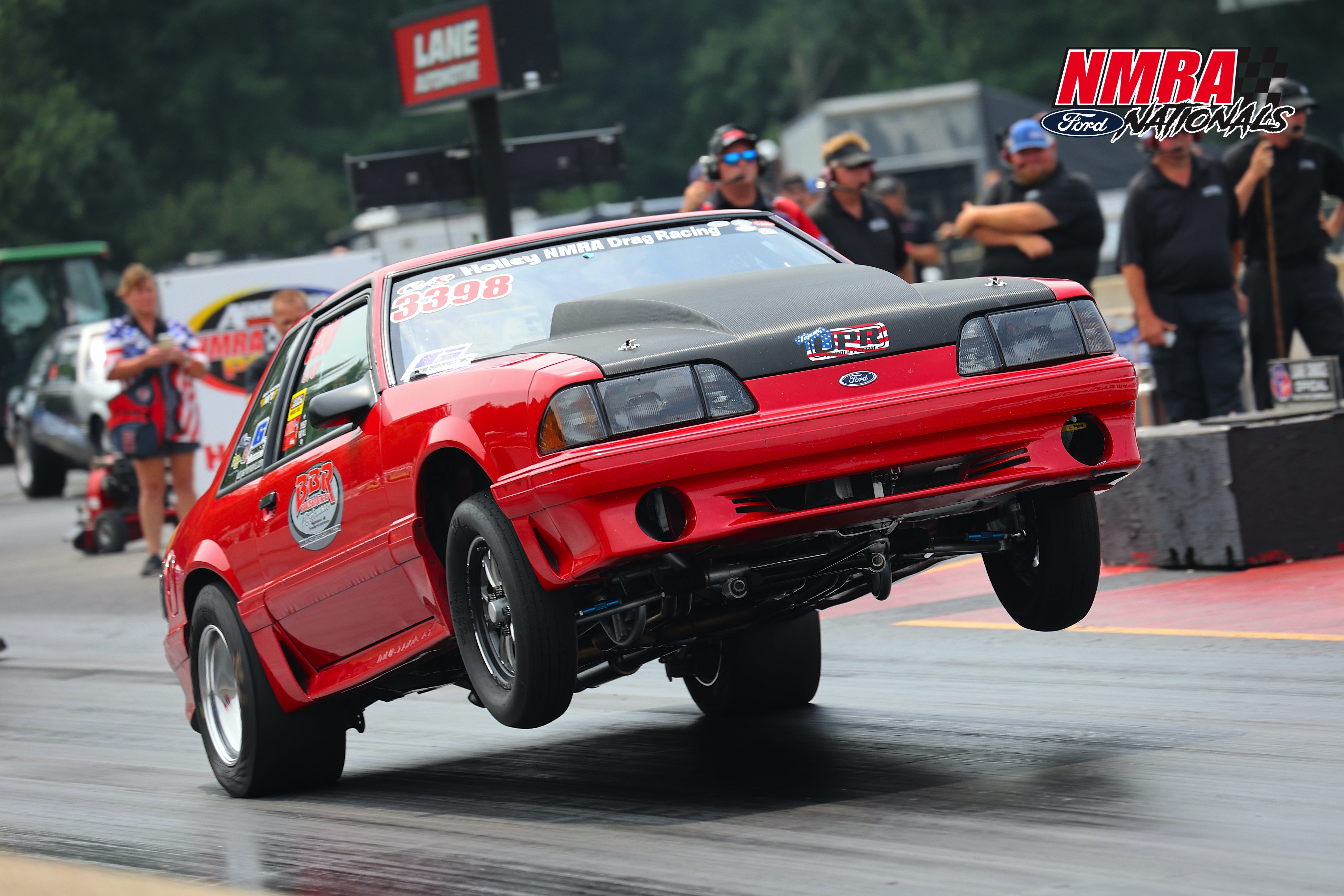 After feeling confident coming into the race, ProCharger Modified Street iconoclast, Charlie Booze Jr., was just looking to get into the show after a frustrating start to the event. His naturally aspirated engine was a bit long in the tooth and finally gave up the ghost after over 100 high-rpm passes. Fortunately he had a spare Kuntz Windsor powerplant in the trailer, so he headed to his friends shop, David Cannon Well Drilling, on Friday to swap out the engines. He made it back today and even had his legendary engine builder, Jim Kuntz, on site for support. After decades of racing on the road course, Leo Capaldi (pictured with Mary Swanson) made his first trip to the drag strip in support of Dave Swansons 2014 Cobra Jet. A consistent runner, this CJ sports a supercharged 5.0-liter engine combo built by Jimmy Ronzello and maintained by Leo Capaldi Racing. Swanson worked his way through the field and made it to the finals in the Watson Racing Cobra Jet Showdown. Talk about clean. Gilbert Correa rescued this high-mileage 1986 Mustang GT, and replaced its pushrod powerplant with a Lund Racing-tuned Gen2 Coyote 5.0-liter from a 2017 Mustang GT. The engine features a billet crank sprocket and oil pump gears for enhanced durability and currently runs mid-11s at over 115 mph with only a 3.15 rear gear. The reason for that ratio is Correas plan to add a positive-displacement blower in the future. The beautiful four-eye rolls on RC Components wheels and stops with Baer Brakes. He came out to run QA1 True Street just for fun.

During qualifying in Richmond Gear Factory Stock, John Leslie Jr. rode a wheelie out through three gears, but it still came down hard enough to tweak a few parts underneath and bust out the passenger-side taillight. Leslie Jr. credits a trip to Palm Beach Dyno for sorting out some issues and picking up a big chunk of power, which helped deliver that front-end lifting run. He hopes to rein in this wild horse and climb up the ranks in the class. Making the move to a ProCharger blower this season, Chad Wendell qualified in the middle of the pack while sneaking up on his Limited Street racers engine calibration. In particular he is creeping up on the timing on his boosted Coyote, which also received more cubes and compression in the off-season. He has no trouble hooking thanks to a full BMR suspension, Viking dampers, and Mickey Thompson ET Street SS rubber. Wendell says he would ˜be tickled if he can get the car into the 9.0 range this weekend, which would be a big jump from its 9.35 at 146 in qualifying.