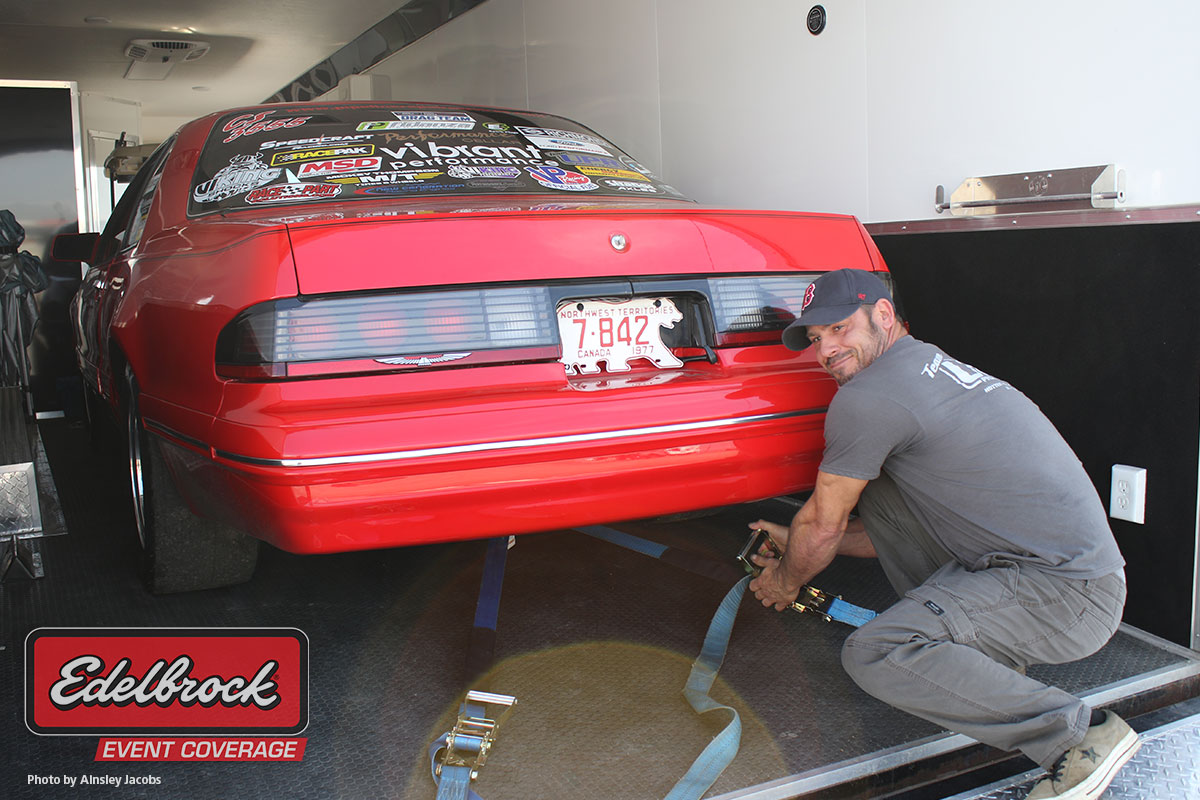 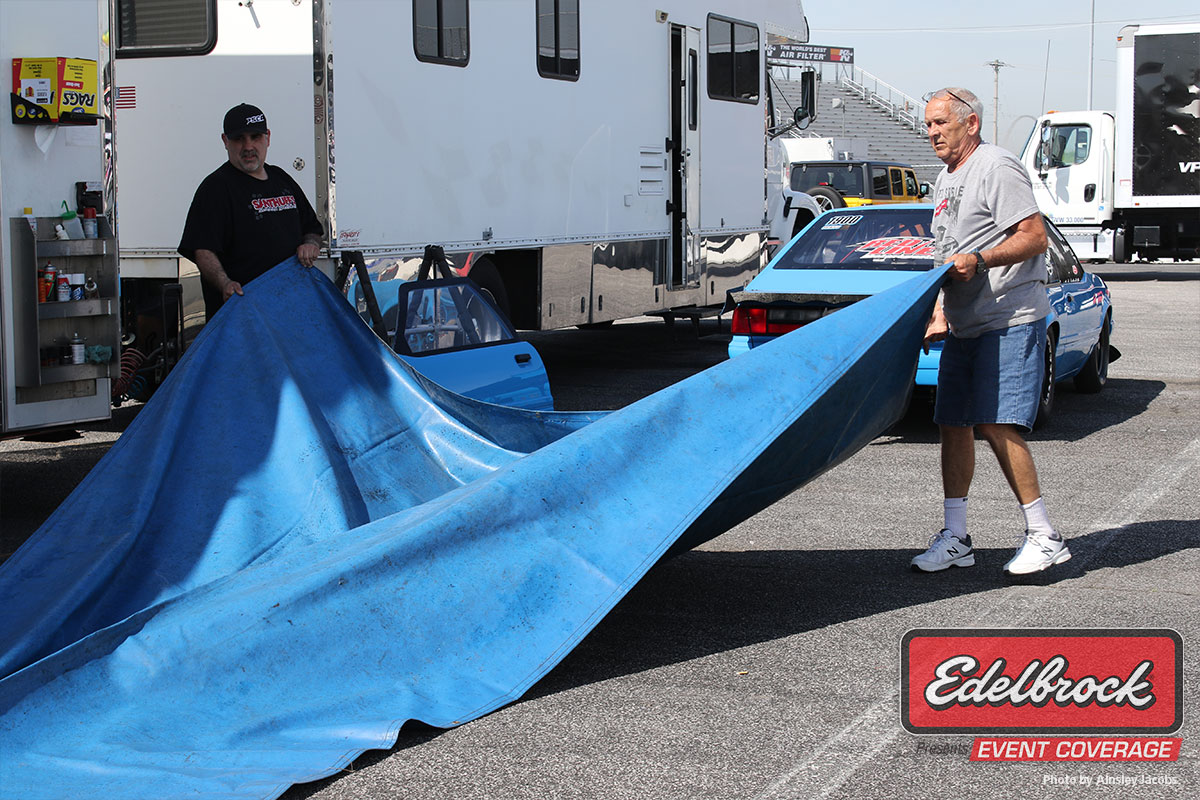 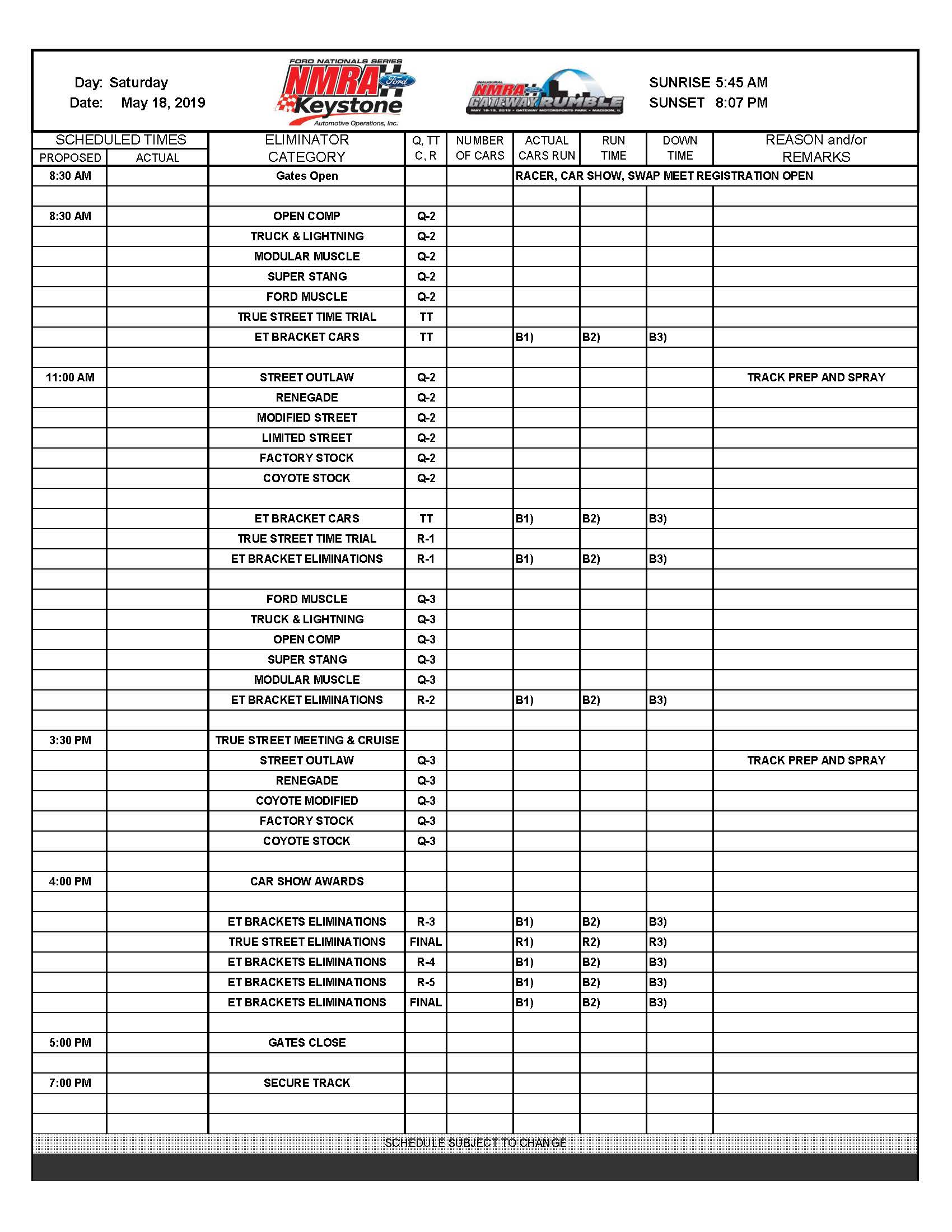 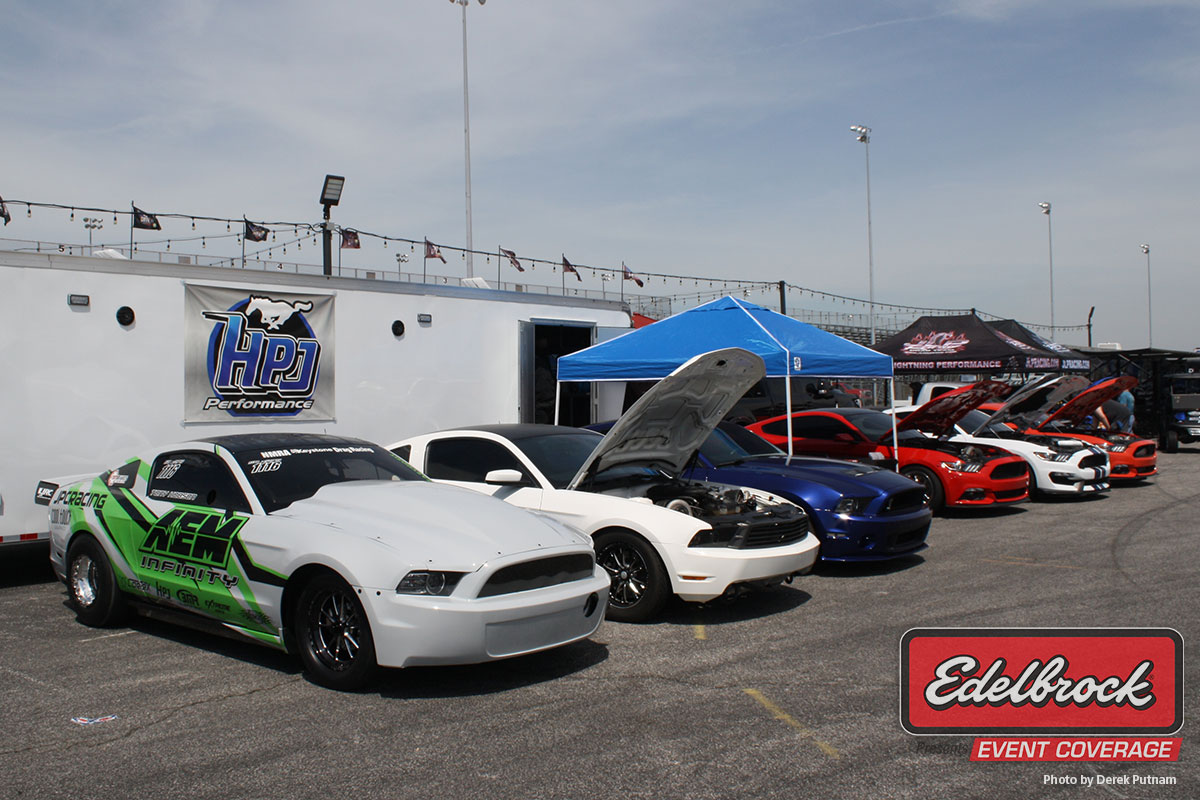 The Inaugural NMRA Gateway Rumble is proudly presented by HPJ Performance, the Midwest Modular Mustang experts, and we would like to send out a huge THANK YOU for their support! Please make sure to stop by the HPJ booth this weekend, located on the vendor midway, and take a look at all of the great performance products that they offer from some of the industrys top brands. 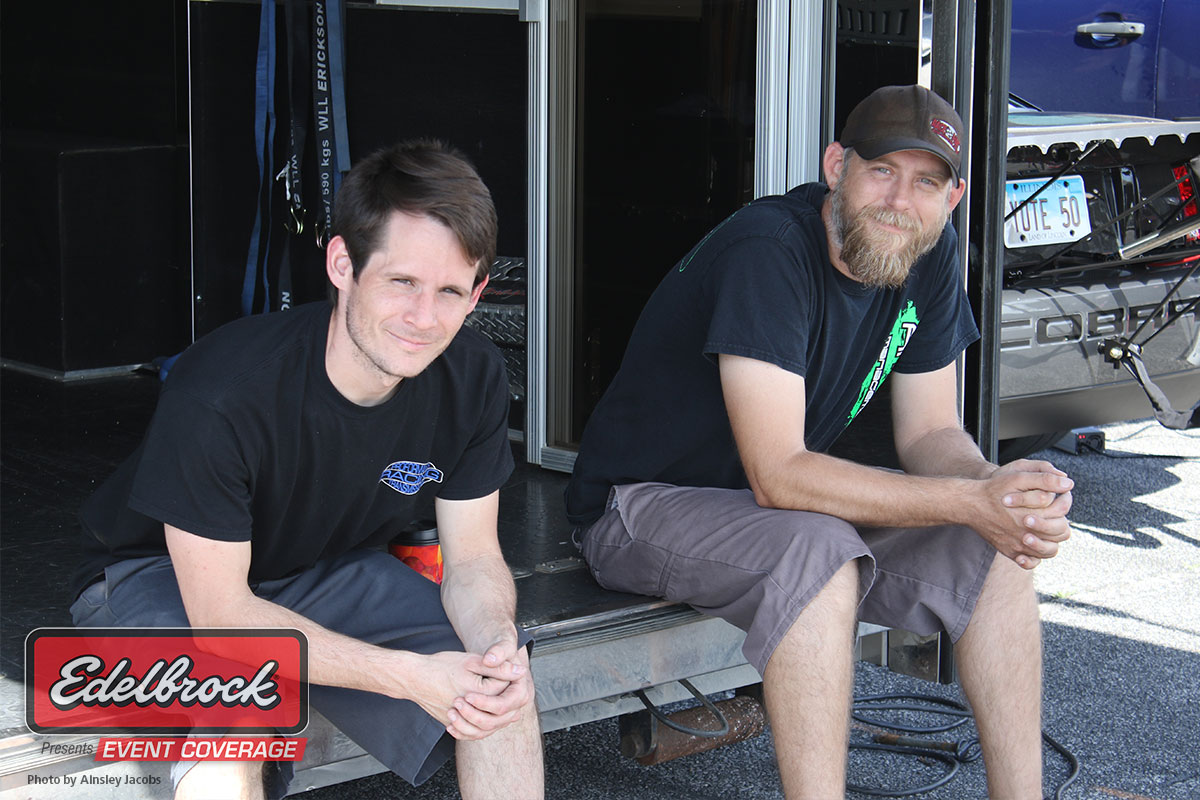 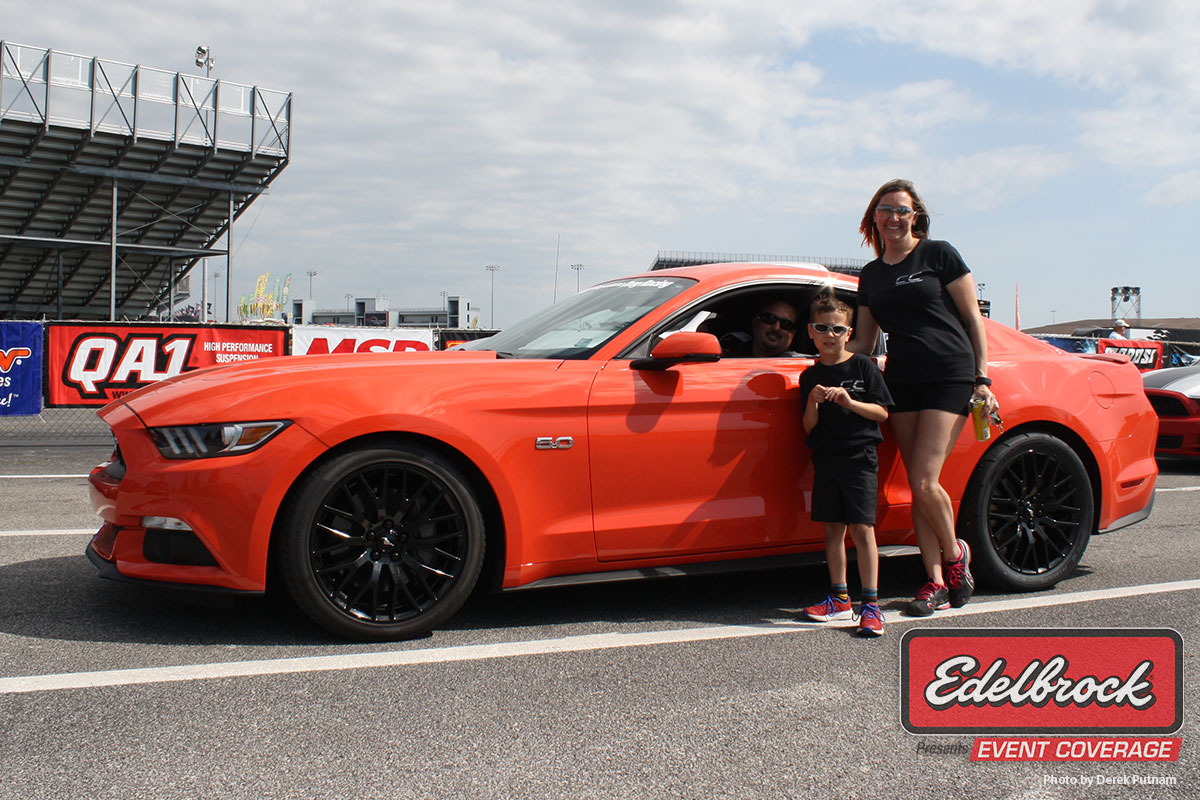 Chad and Valerie Creamer first met at World Wide Technology Raceway sixteen years ago through their love of Mustangs, and the local couple planned to run Chads 2004 Cobra in this weekends Gateway Rumble. But when problems arose in Chads Mustang, Valerie got the chance to put her daily driver in the QA1 True Street class instead. Im usually more stressed when he races, admits. This should be a lot of fun. The 2015 Mustang sports a blower and upgraded exhaust, and Chad made the first track passes on the pony car during testing yesterday, clocking a best 11.02 at 130 mph pass. He improved on that to a 10.83 at 132 mph this morning.

Andy Johnson was hoping to put the hurt on the G-Force Racing Transmissions Coyote Stock class as he was throwing down and slingin punches during qualifying, but the track fought back. Fortunately, the 2018 class champion Dan Ryntz was around to come to his rescue. He looked at the data and gave me some tips on shock adjustments, said Johnson. When he talks, Id be a fool not to listen. 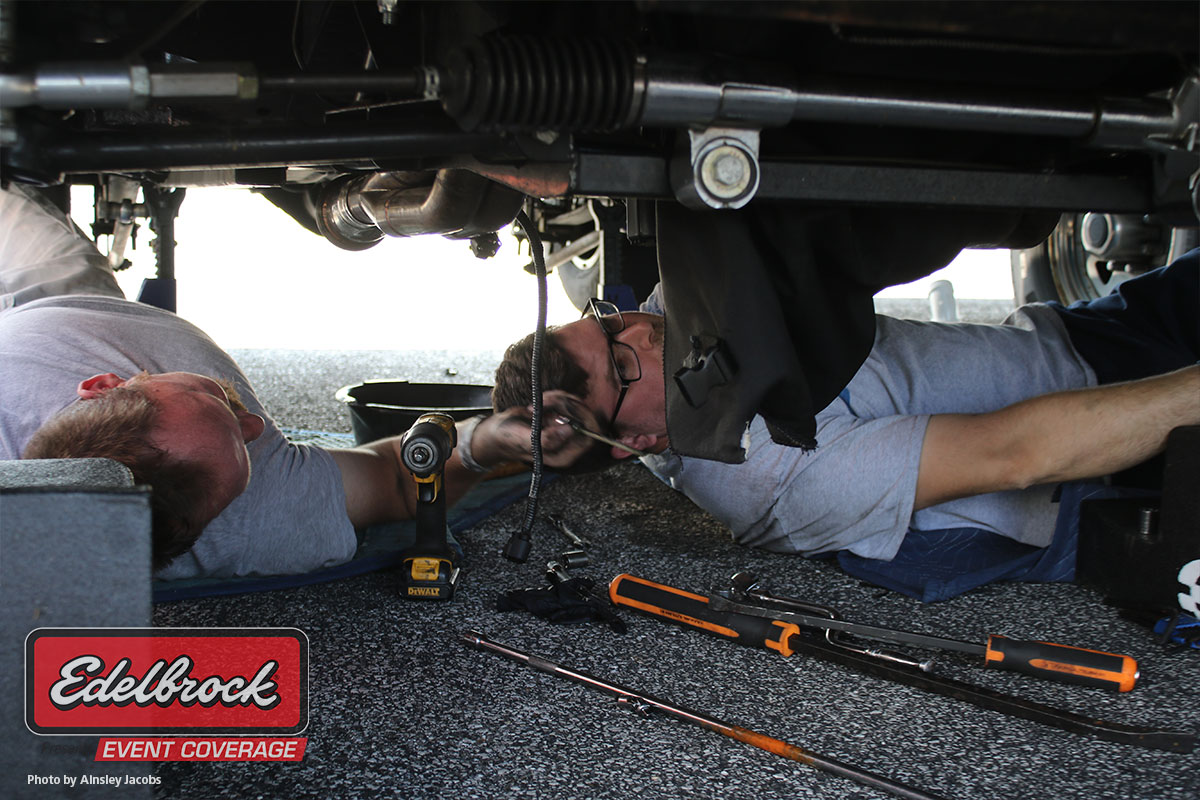 A quick bit of maintenance in Mike Bowens pit was on the schedule this morning, as the guys were working to replace some worn out parts and install a fresh Spec clutch in the Richmond Gear Factory Stock ride in hopes of improving upon yesterdays 11.233 at 127.84 mph hit in qualifying. 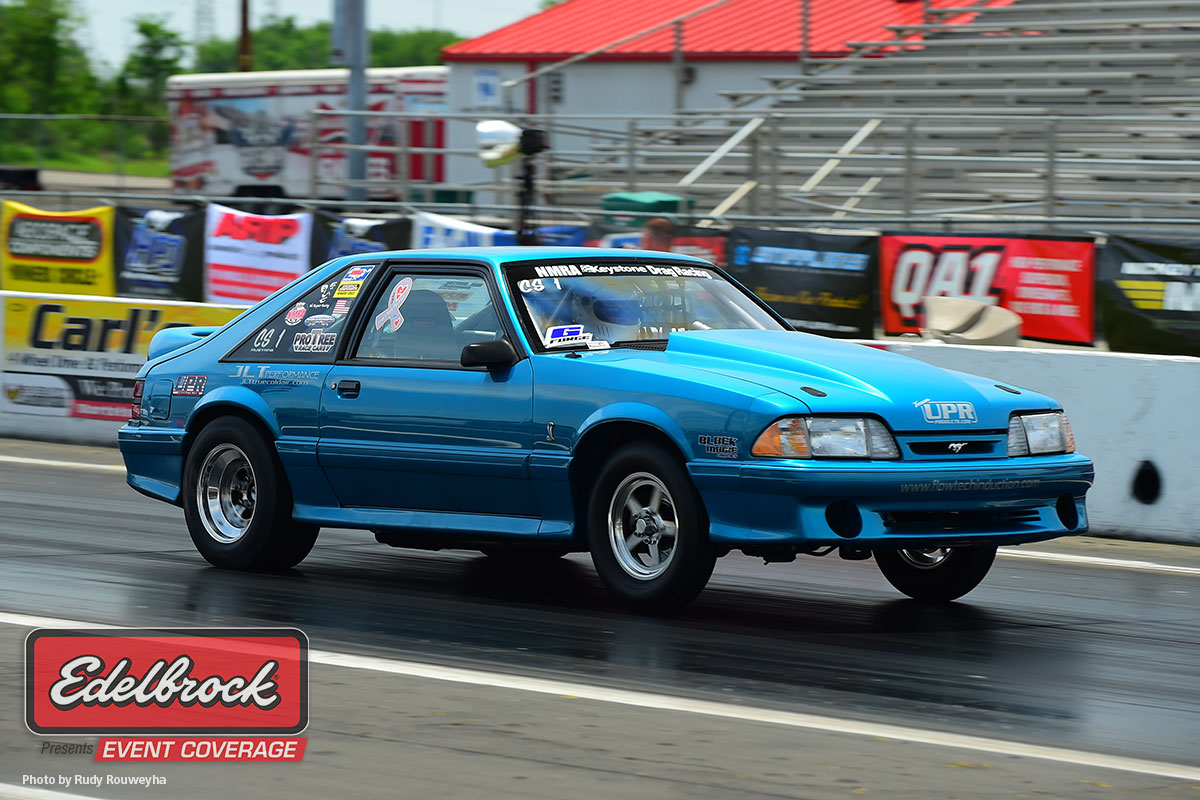 Reigning G-Force Racing Transmissions Coyote Stock champion Darin Hendricks was surprisingly low on the qualifying order after yesterdays first session, with a 10.349 at 131.18 mph trip to his credit. Some suspension adjustments to better accommodate the track today should help Hendricks get a handle on his 93 Cobra, which is sporting an updated version of his usual Black Magic clutch as of last week. 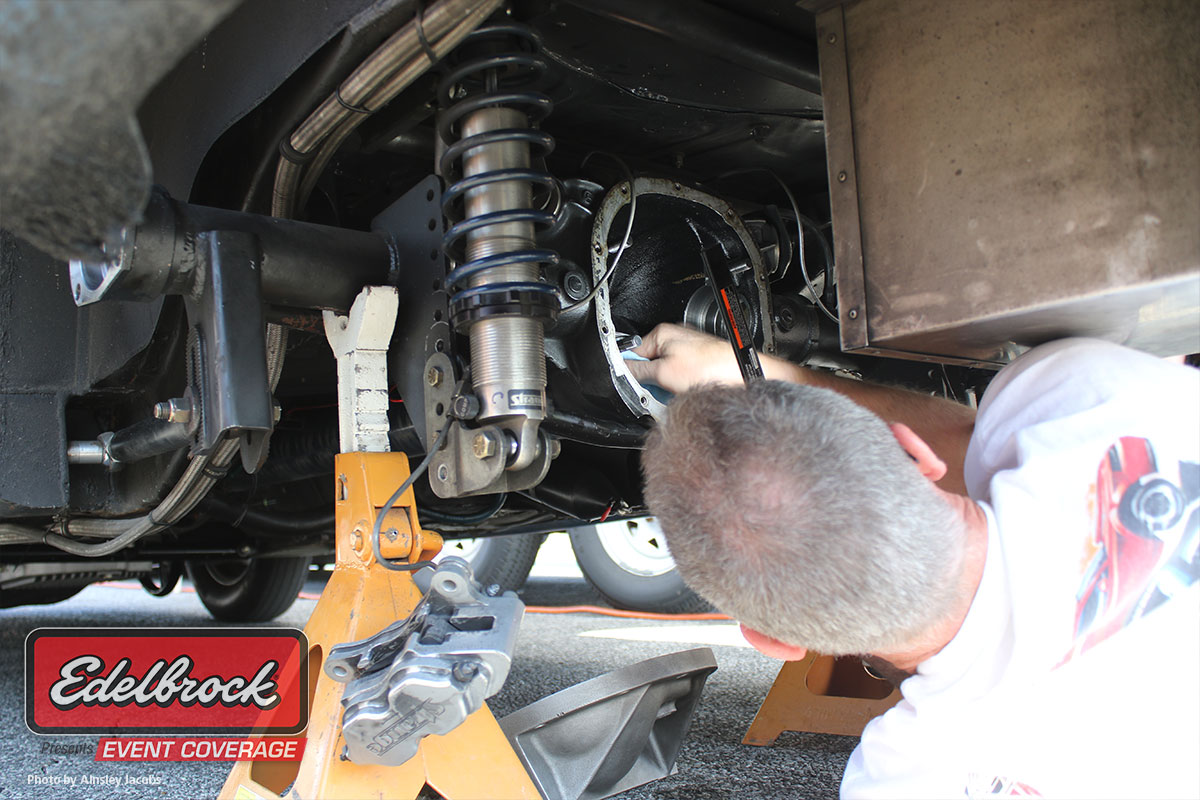 Too much power resulted in some tire shake, and Bob Cook wound up kabooming an axle as a result. Fortunately, some good friends were able to come to his rescue and picked up a replacement direct from Strange Engineering yesterday, then drove it down last night. Cook was busy swapping out the damaged parts this morning, and hopes to have his ProCharged Fox body ready to go for the second qualifying ProCharger Modified Street session. 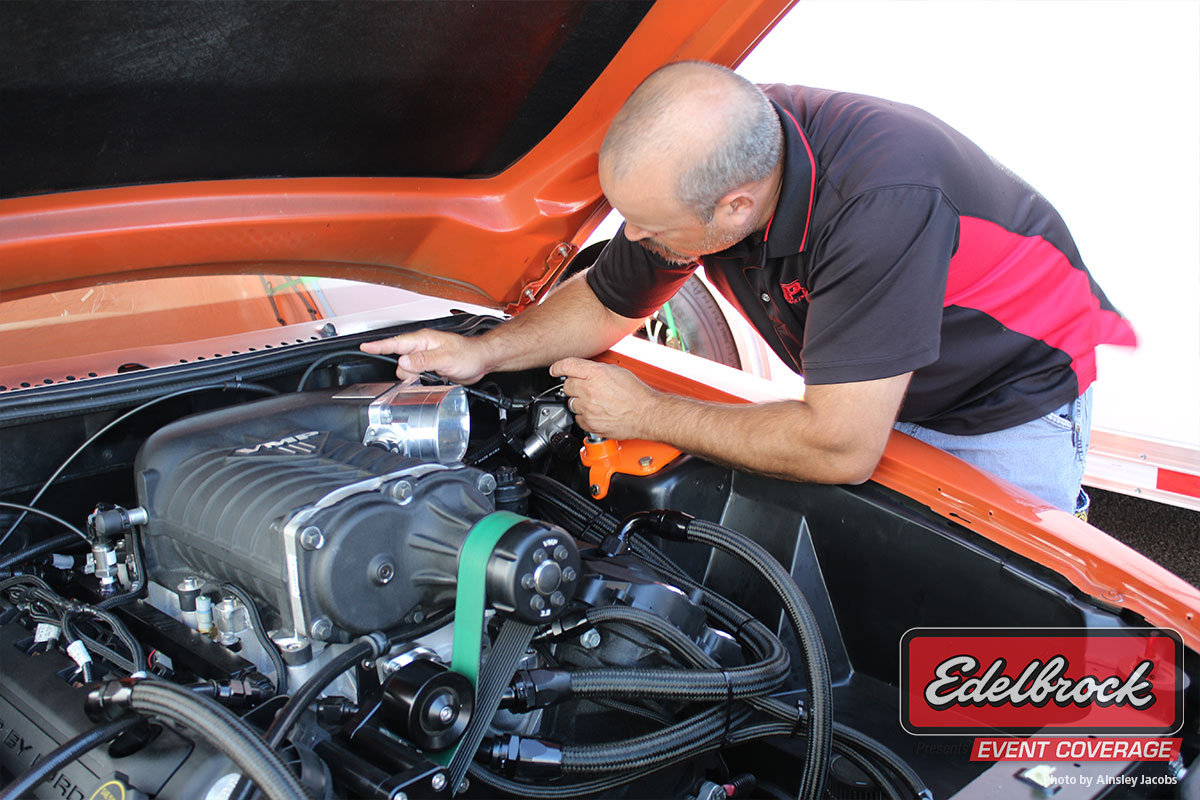 Bill Putnam in his UPR Products 94 Mustang struggled to get down the track in qualifying yesterday, but the guys believe they have a handle on the VMP-supercharged ride. Fellow UPR cohort Sharad Raldiris was on the scene making a throttle cable adjustment to alleviate an issue, and other top-secret changes are surely in the works as well. 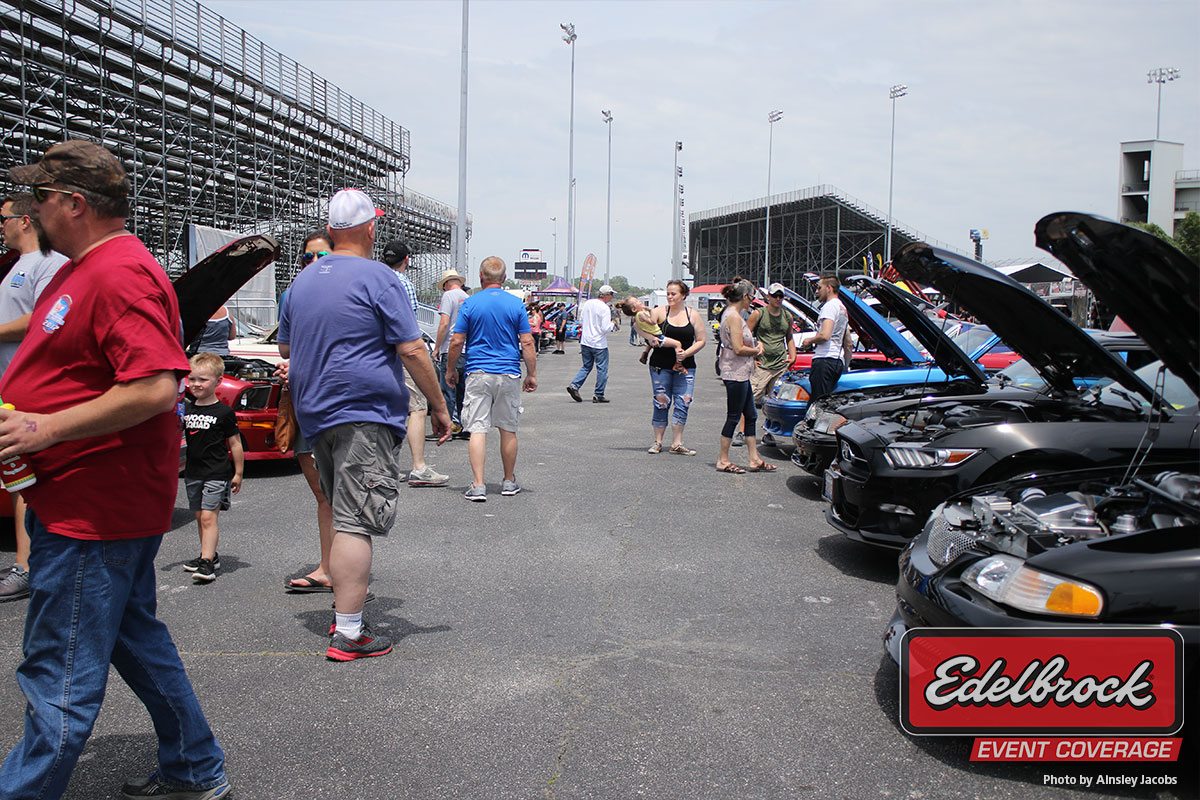 Cars and trucks, classic and contemporary, mild and wild “ our all-Ford car show is in full swing here at World Wide Technology Raceway at Gateway and fans are loving getting to inspect the quality craftsmanship up close. 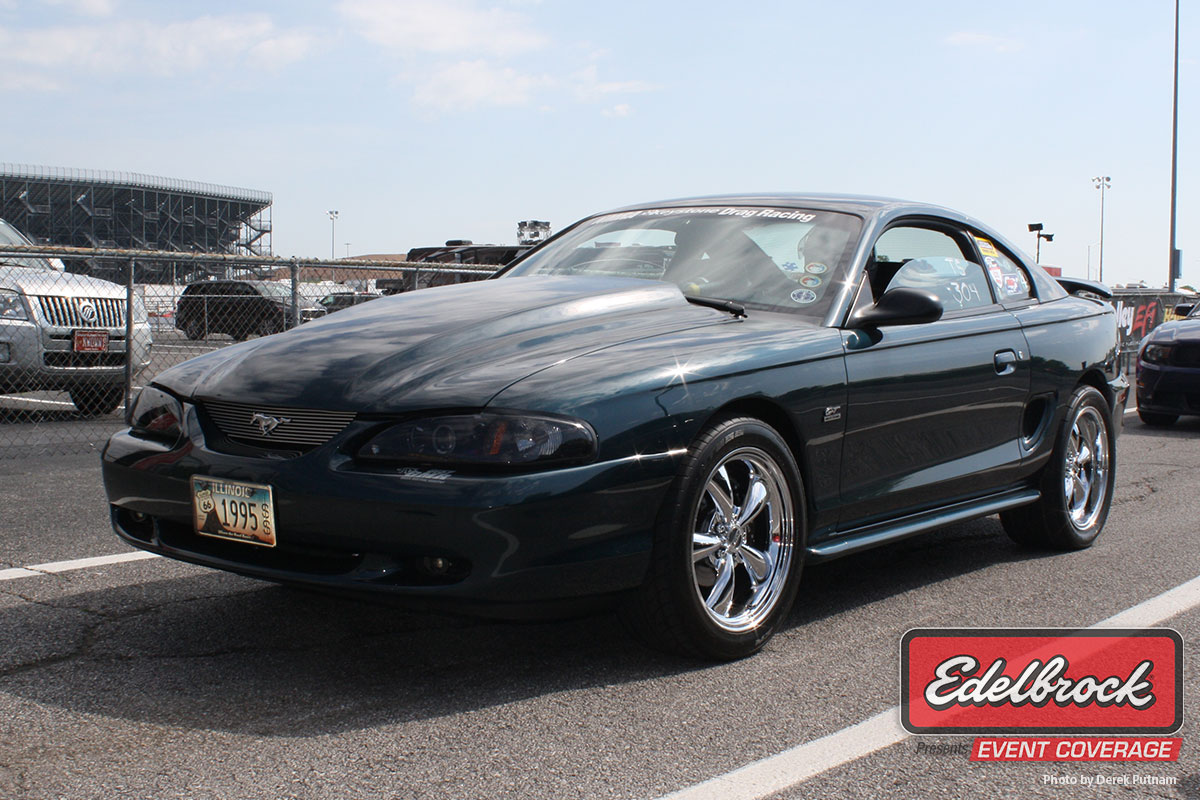 Going for her 19th class this weekend in the QA1 True Street class is Belinda Moore. The veteran and her husband Cliff bring their ˜95 Mustang to several events during the year and split driving duties, with Belinda competing in True Street while Cliff does battle in the bracket category. 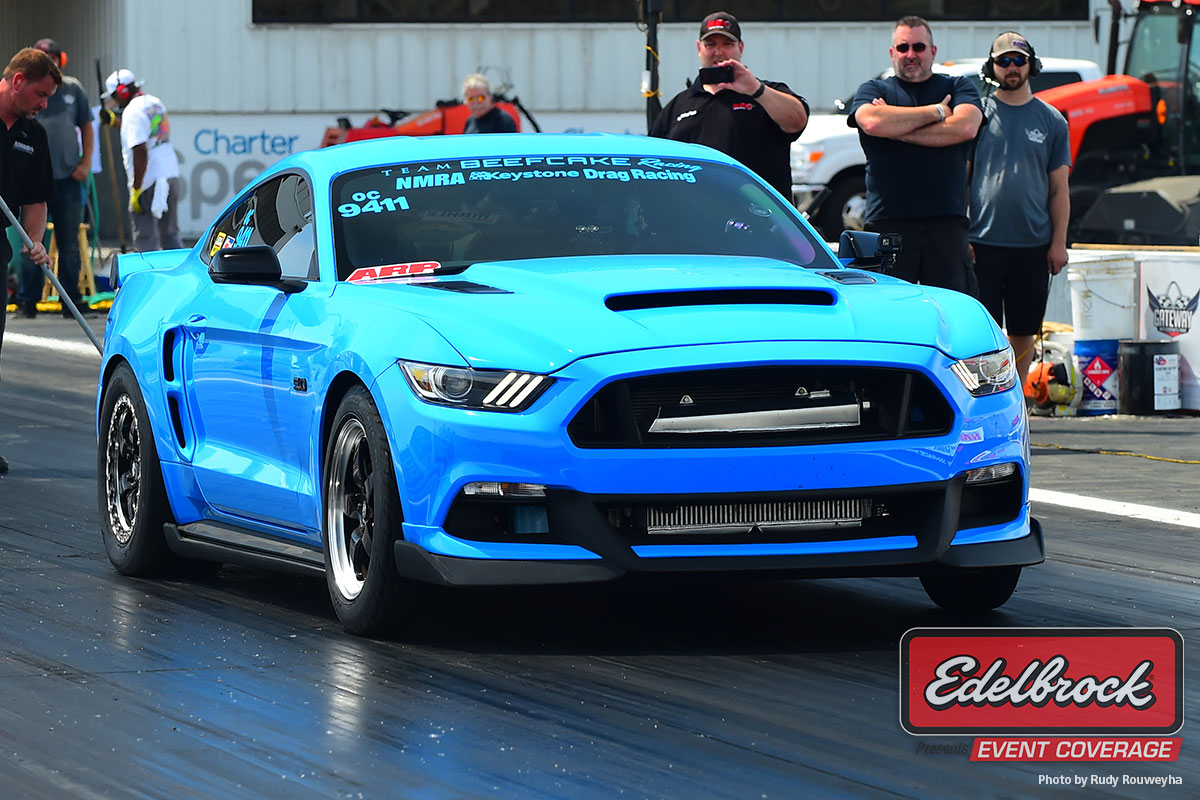 After clicking off the first 8-second run in his ProCharger Modified Street 2018 Mustang during testing yesterday, Terry Beefcake Reeves added another car in his fleet to the 8-second range by clicking off an 8.85 at 168 mph in this 2017 Mustang during qualifying for ARP Open Comp, making the first they know off to run an 8-second pass on Air Ride suspension. A Livernois-built Coyote gets additional pressure from a Hellion Sleeper twin-turbo kit, a Fore fuel system pushes the fuel, while a Beefcake-built 6R80 automatic passes the power to the rear. Steeda components and Viking rear shocks help plant the power, and Reeves hopes to whittle down the 1.5 60-foot times and get the car just a bit quicker. Our goal is to run an 8-second pass on 20-inch wheels, said Reeves. Were ready to try for that goal now. 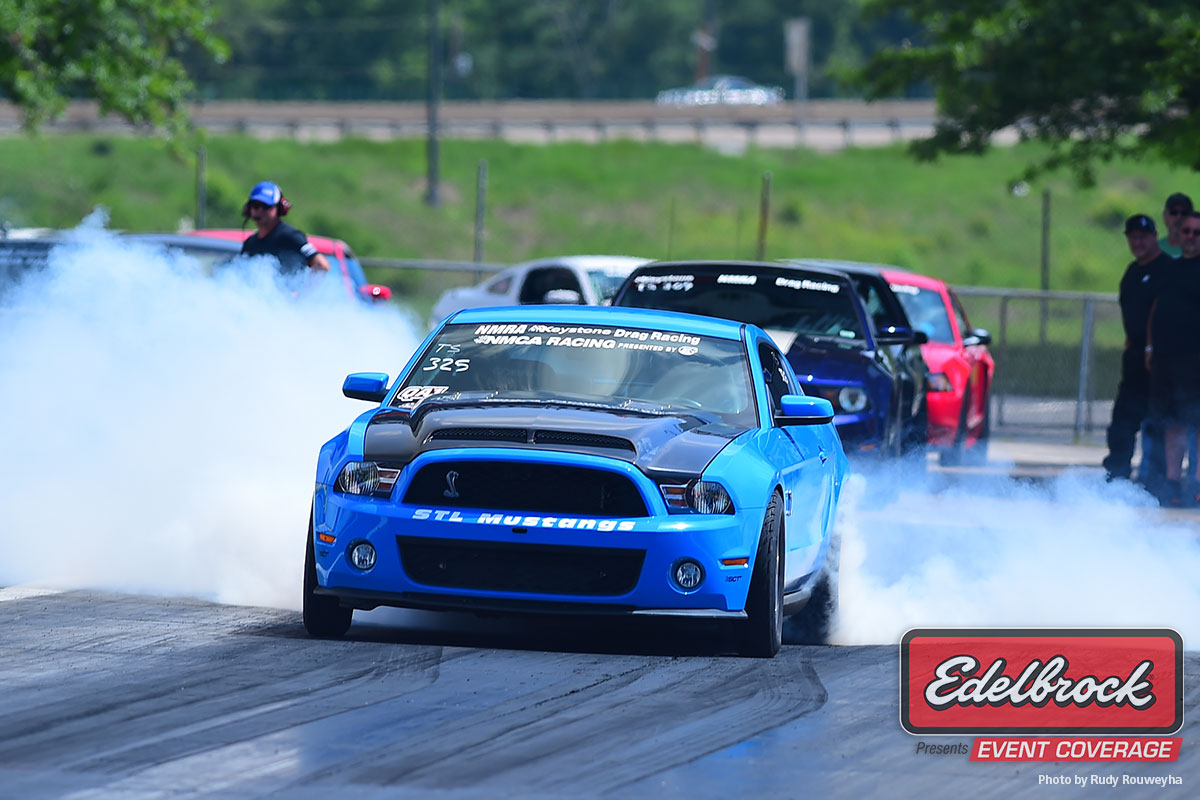 With sixteen spots up for grabs in the Stifflers Chassis and Suspension Gateway Rumble class tomorrow, the QA1 True Street class has swelled with dozens of new entries today. Leading the charge for quickest elapsed time in testing thus far is multi-time class winner Randy Thomas, who clicked off an 8.50 at 164 mph in his 2010 Shelby. 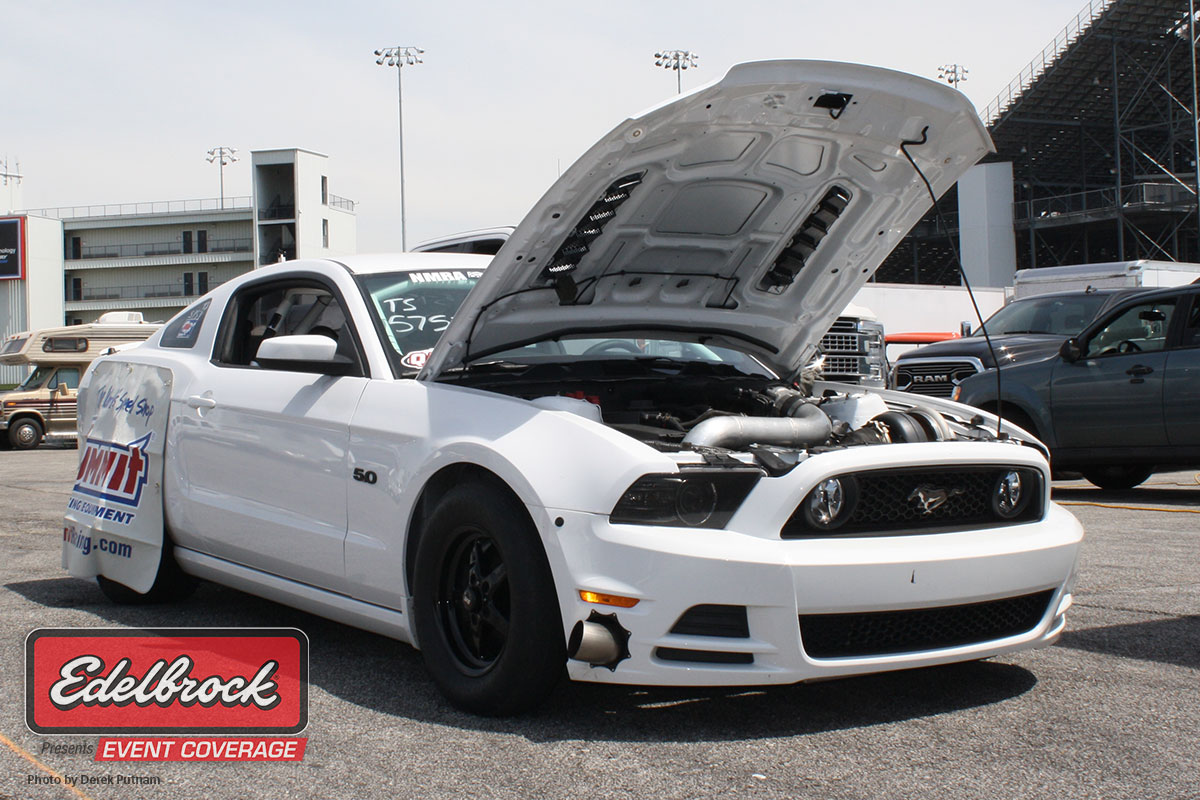 Making the trip from Ontario, Canada to participate in the Gateway Rumble is Bruce Whatley. Doing the driving duties of a partnership deal with car owner Heinz Stock, Whatley pilots this clean Mustang. A built short block Coyote gets force fed air from an 88 mm turbocharger, and the power is passed through a turbo-glide transmission. The car clicked off an 8.11 pass in testing at Bradenton earlier this year, but the converter was a little too loose during those runs, said Whatley. Despite the warm conditions, the Mustang has run a best of 8.11 at 179 mph thus far this weekend. 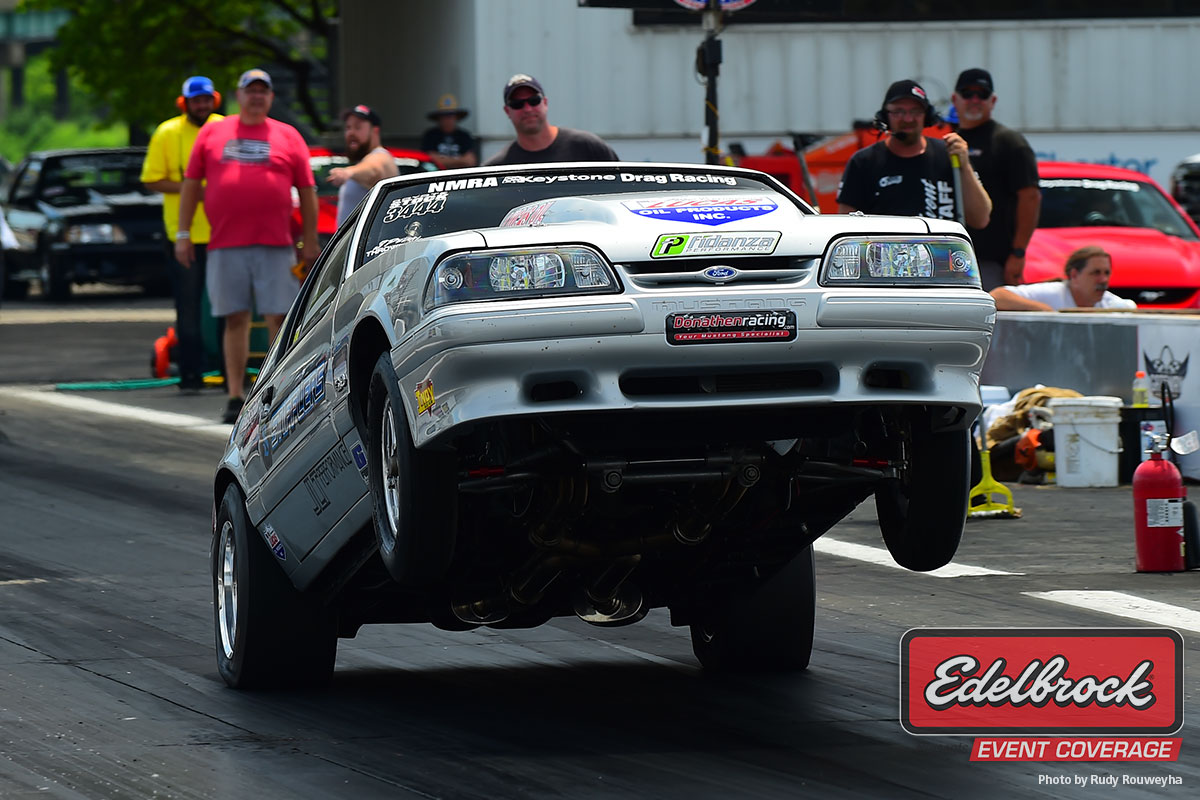 Clair Stewart II is putting his ex-Renegade car to good use in the G-Force Racing Transmissions Coyote Stock class in 2019, leading the points chase based on final round appearances at Bradenton and Atlanta, scoring a win at the latter. I was all set to put a new Renegade combination in this car a few years ago, said Stewart. But one ride in a friends Coyote-swapped Mustang changed his mind. All it took was one ride, he admits, and combining a Gen-2 Coyote with the right set-up on his Stifflers suspension and Strange shocks puts the wheels in the air for this 91 Mustang. Stewart opened qualifying on the pole at 10.23 yesterday, and improved to a 10.20 at 130 mph this morning to continue holding the number one spot through two sessions. 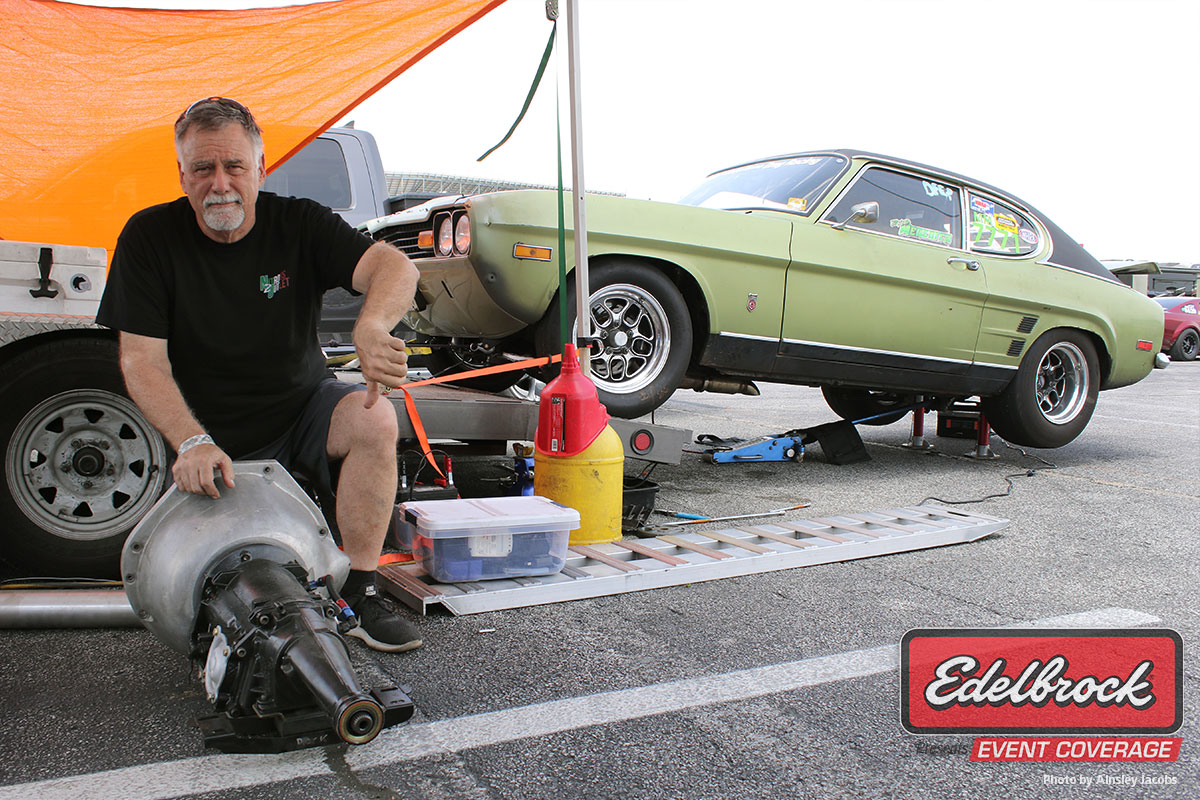 Its been a hell of a weekend for Exedy Clutch Modular Muscle contender James Meredith and eliminations havent even started. The man from Texas arrived on the property with his 73 Capri and promptly found telltale metal glitter in his transmission. So, he did what any determined racer would do “ he poured it back in and ran the first qualifying hit on Friday. Unfortunately, the trans locked up just before the last turn off near the shut down area and Meredith had to limp back to his pit in first gear. A man on a mission, Meredith asked his friend Gary Hollywood Parker if he had a spare C4¦ and he did! Except that it was in Atlanta. So, Tim Matherly of MV Performance hustled the replacement over to Roger Harvey at Harveys Body Paint & Restoration in Tennessee, and Harvey met Meredith on the border of Tennessee and Kentucky early Saturday morning. The bucket-brigade roadtrip seemed like it would be a success, but then Meredith got the text message calling Modular Muscle to the lanes “ while he was stuck in traffic, twenty miles from the track. He missed the third and final qualifying session, but will still be able to run in eliminations since he broke the beams in Q1. Special thanks go out to Mike Bowen of Powerhouse Automotive for helping pull the injured gearbox and for his assistance in installation of the loaner. >>> QUALIFYING RESULTS CAN BE FOUND HERE <<<