We're kicking off day two of the NMRA Ford Performance Nationals at Summit Motorsports Park and will be wrapping up qualifying today for all classes while also running through True Street and the special All-Female True Street category. Spectators can cruise the midway to talk to their favorite Ford-focused vendors and enjoy the big UPR Products car show that's going down all day long.

>>> QUALIFYING RESULTS CAN BE FOUND HERE <<<

Having his friend and tuner, Brian Friedentag, with him on site has been a huge help for Edelbrock Renegade racer Travis Burkett. He had run a 1.13-second 60-foot time with his ProCharged '92 Mustang at the previous race in St. Louis but only clocked a 1.27-second short time during yesterday's qualifying due to the wet and heavy air. Even though Burkett's 9-year-old son isn't with him and he's down a crewman as well this weekend, he and Friedentag are having a great time and sat eighth in the order after the first two sessions with a 5.082 at 140.43 mph trip. 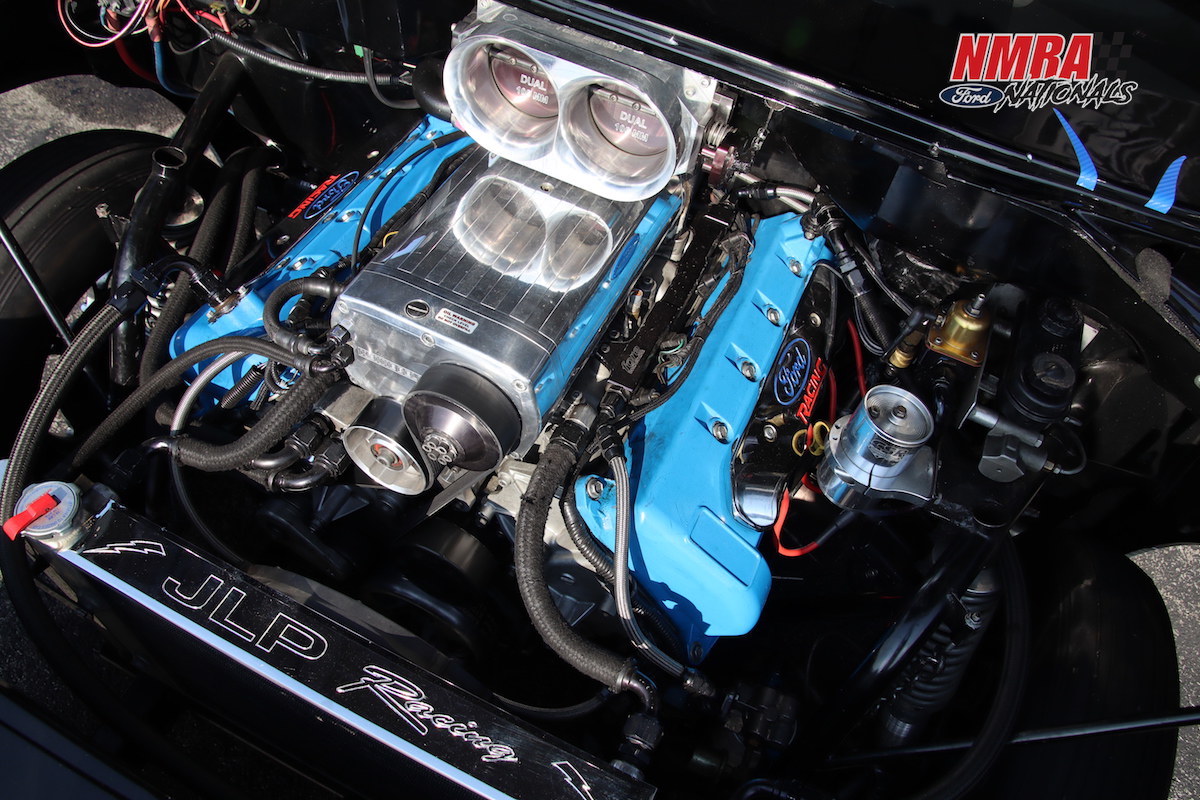 Longtime and legendary Detroit Locker Truck and Lightning driver Johnny Lightning Wiker was holding down the second spot in points before this race, and his weekend was off to a great start as he led qualifying with a .005 reaction time yesterday. But his hopes of hauling through the rounds were dashed when a secondary timing chain broke and hurt the 6.4L Johnny Lightning Performance stroker engine in his Lightning as he was doing a burnout before the third round of qualifying this morning. I was just getting ready to post a .000 reaction time, said Wiker with a smile and a sense of humor despite the disappointment. We have a spare engine back at the shop, so we will be ready for the race in Michigan in July. Really nice cars have rolled in for the UPR Car Show today at the NMRA Ford Performance Nationals at Summit Motorsports Park, and there may be even more to come. As part of the new Ring of Fire, judges will choose 12 cars for separate judging and a special prizes, and the overall winner will receive a Victor award and a $50 NMRA Power Mall gift certificate. 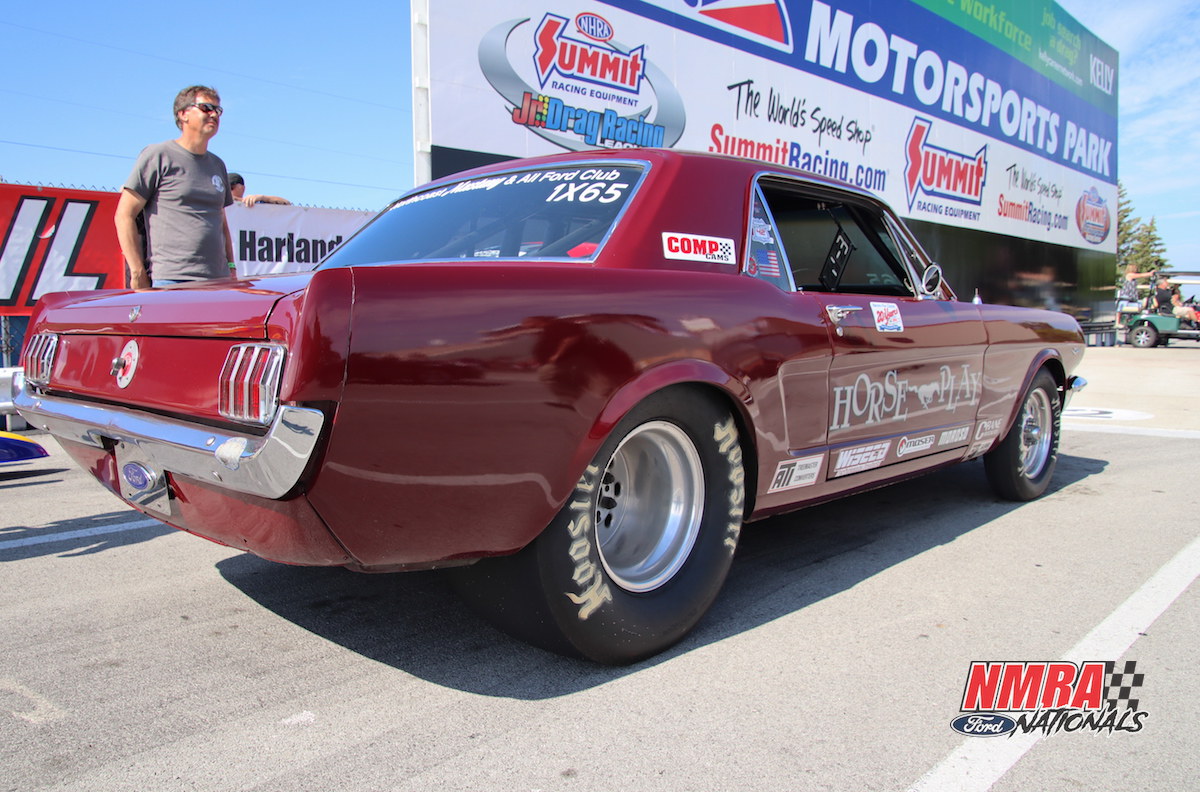 Brian Foecking and his wife, Holly, used money from their wedding to purchase their 1965 Mustang 35 years ago, and while they drove itÂ on the street back then, Brian drives it on the strip these days. With a 427 cubic-inch Windsor engine under the hood, the car averages low 10s in the quarter-mile, and the Concord, Ohio resident is taking on Bracket 1 in the Bracket Mayhem this weekend. 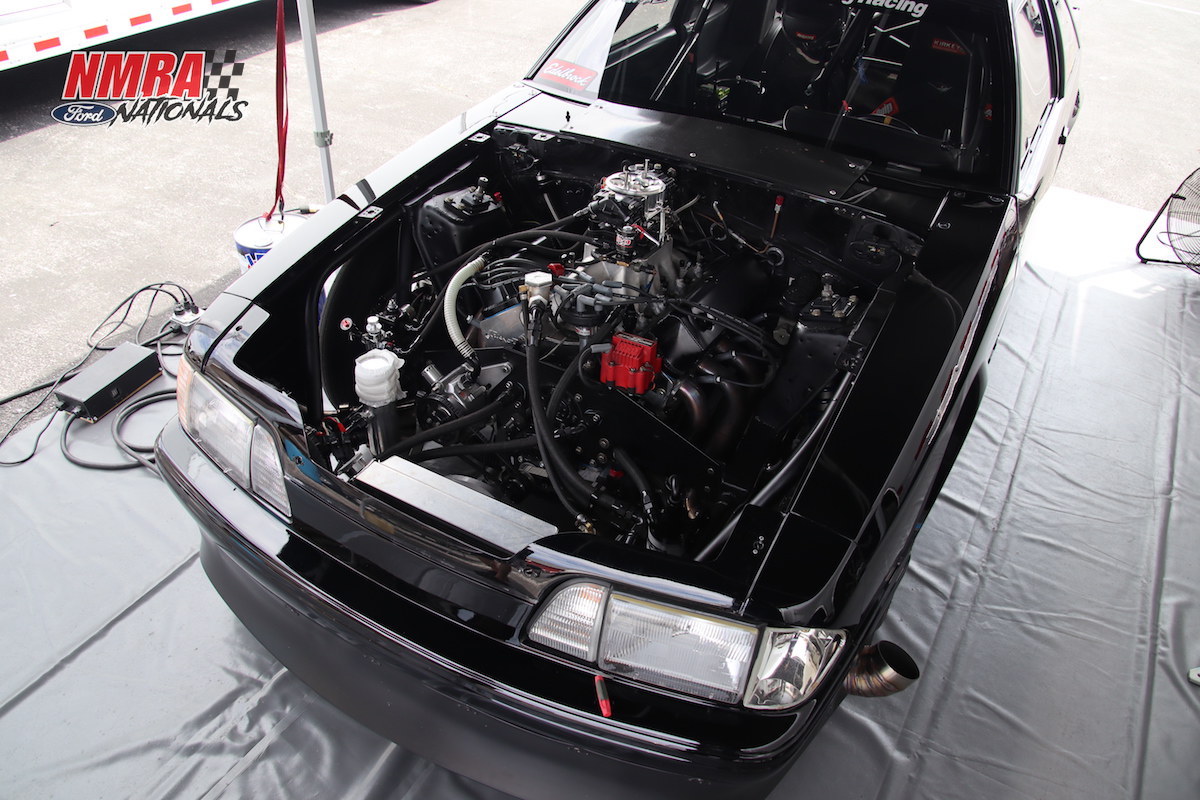 Bob Zelenak is back in Edelbrock Renegade action this weekend, with a few more cubic-inches under the hood of his incredibly clean Mustang. He went from 427 cubic-inches to 450 cubic-inches with a new shortblock built by his shop, Continental Competition in Pennsylvania. It features the same top end components he had been using, including the High Port heads, BES intake and Book Racing carburetor. Zelenak enhances it with a nitrous plate system by Fast Lane Nitrous, and with no time to test before coming to this event, he went straight into qualifying, where he had fueling issues in the first two rounds, followed by a 4.74 in the third round. He's sitting in the fifth spot going into the final round of qualifying today. I'm pretty happy with what the car has run so far this weekend, and it definitely has more potential, said Zelenak. I'm a dedicated small-block nitrous guy, so I really want this to work well.

The UPR Products car show has a huge turnout today with hundreds of cars ranging from mild to wild scattered across the property. There's truly something for everyone as grocery getters and daily drivers mingle with priceless rarities and high-dollar custom builds, all of which are proudly Ford-powered! As a special bonus, the Ring of Fire competition puts the top twelve judge-selected vehicles into a separate competition. All will receive additional prizes, but the overall RoF Best of Show winner will receive a special Victor award along with an NMRA PowerMall gift certificate and be featured in an upcoming issue of Fastest Street Car magazine!

The Model T Ford Club International brought out their absolutely beautiful antique Fords to display during Saturday's car show festivities. Several are well over 100-years old, and all are the foundation of the modern performance Fords we see today blasting down the dragstrip. Members such as Tom Dupee have spent many painstaking years lovingly restoring their family heirlooms to preserve the memories and integrity of these incredible pieces of history. The members regularly drive their Model Ts, too, and the owners enjoy sharing their unique stories with enthusiasts.

They say everything's bigger in Texas, and that's definitely true of Texas-based racer Lloyd Mikeska's generosity. This weekend, in addition to racing his '06 Ford Mustang in Race Pages Digital Ford Muscle (where he's qualified second with a 12.004-second pass) and his '16 Mustang in HP Tuners Super Stang (in which he qualified #1 with a 0.004-second reaction time), the kindhearted man regularly loans his race-winning rides out to teens who are looking to learn the ropes themselves. Mikeska surprised Maci Cram by removing his own Silent Lloyd sticker from the driver's side window of his '06 model and replacing it with hers, as she's competing in the special All Female True Street category with Mikeska's Mustang. Tony Hobson struggled in early VP Racing Fuels/Madditives Street Outlaw qualifying in the heat and humidity in his Mustang motivated by a small-block Ford by DiSomma Racing Engines and a ProCharger F-3-102 at the NMRA Ford Performance Nationals at Summit Motorsports Park. But, he and his tuner, Eric Holliday, came up with a suitable tune-up with their FuelTech engine management system and the result was a 4.35 rip to set the pace in the third round of qualifying. This is the worst air we have raced in, so we're really happy about running the 4.35 and leading qualifying, said Hobson, whose car has a rear end by Marty Merillat and Menscer-massaged shocks, and who is now preparing for the final round of qualifying today.

Reigning JDM Engineering Limited Street champion Bill Putnam of UPR Products fame is sitting in the number one qualifying spot after three sessions this weekend with an 8.525 at 160.48 mph trip from his supercharged '94 Mustang and one more to go before he can finalize the position. Putnam tried something different at the last race in St. Louis as he was using a different engine and cams, but it didn't work out as well as he had hoped so he switched back to his old bullet. He's also working on dialing in his Neal Chance torque converter and is moving towards picking up a few more hundredths of a second. 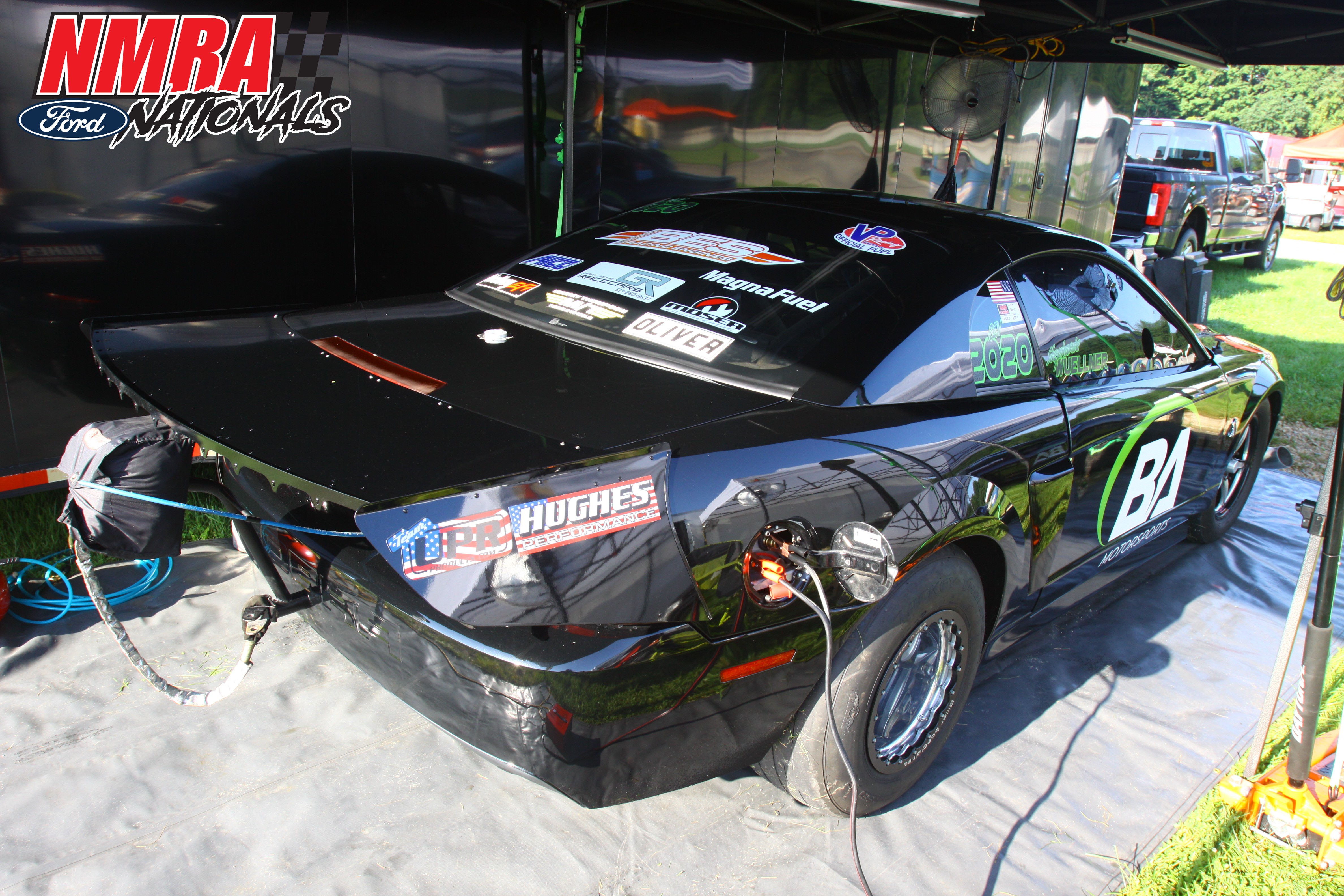 The 2020 race season didn't end the way Jim Ault would have liked it to, as he cracked his block and crank, but Tony Bischoff of BES Racing Engines put together a new 4.6 Four-Valve engine, like the one he hurt, but with a new aluminum Teksid block rather than an iron block. Ault fronted it with a new Forced Inductions-massaged 76mm turbo, and while he was at it, he replaced his factory doors, hood and front bumper with carbon fiber components and got 300 pounds of weight off of his car, which is wearing new paint by Meadows Paint and Restoration. Ault is in Edelbrock Renegade competition for the first time this year at this event, and so far, he is qualified in the tenth spot with a 5.00 with help from his crew chief and tuner, Brandon Alsept.

It's all about family this weekend for Mark Anderson (right), driver of the Laris Motorsports Insurance-backed Mustang in Richmond Gear Factory Stock qualifying. He's got his 12-year-old daughter and 16-year-old son with him acting as his crew, and his uncle Rick (left) from Holley helping out as well. Even with the hot and humid weather, Anderson's 2-valve engine powered him to a run of 10.403 at 124.38 mph (with a big wheelie) right off the trailer on Friday and put him out in front. He improved to 10.366 at 127.09 on Saturday but slipped into second for the qualifying order.

G-Force Racing Transmissions Coyote Stock driver Chad Stephens has been having a rough go of things lately, from not being able to find the produce he likes at the grocery store to his Dirty Bird '87 Ford Thunderbird acting up and hurting clutches and transmissions. Perhaps the car is jealous that Stephens cheated on it by piloting Andy Johnson's Fox body at the last race in St. Louis, or perhaps it's just his turn to ride the struggle bus. Either way, he went from not touching anything on the car in Georgia to touching everything this weekend in Ohio, and has had the transmission out four times alone so far at Summit Motorsports Park. In qualifying, Stephens ran 10.040 at 133.79 mph to end up twelfth as we go into tomorrow's eliminations.

Racing her daily driven 2019 Mustang GT in the All Female True Street class, Leigh Anne Wagoner recently got a new cold air intake and tune up and had a blast running consistent 11.9-second passes to average 11.982-seconds across her three runs and take home the overall runner up honors for the class. Her husband, Jason Wagoner, usually races his GT500 in True Street but his car broke so she's getting to have all the fun instead as this is her first event back after a two year break and clearly she's a force to be reckoned with.

Elaine Moistner's husband Mike Moistner usually gets the spotlight in Fastest Street Car Super Stang, but she stole the spotlight during the All Female True Street race with her 2014 Mustang and averaged 15.306-seconds with her three back-to-back passes. This wasn't her first foray into the field, as Elaine is a veteran of the category and won the 15-second section at the 19th Annual Nitrous Supply NMCA World Street Finals presented by Chevrolet Performance in Indianapolis, Indiana, in 2020. 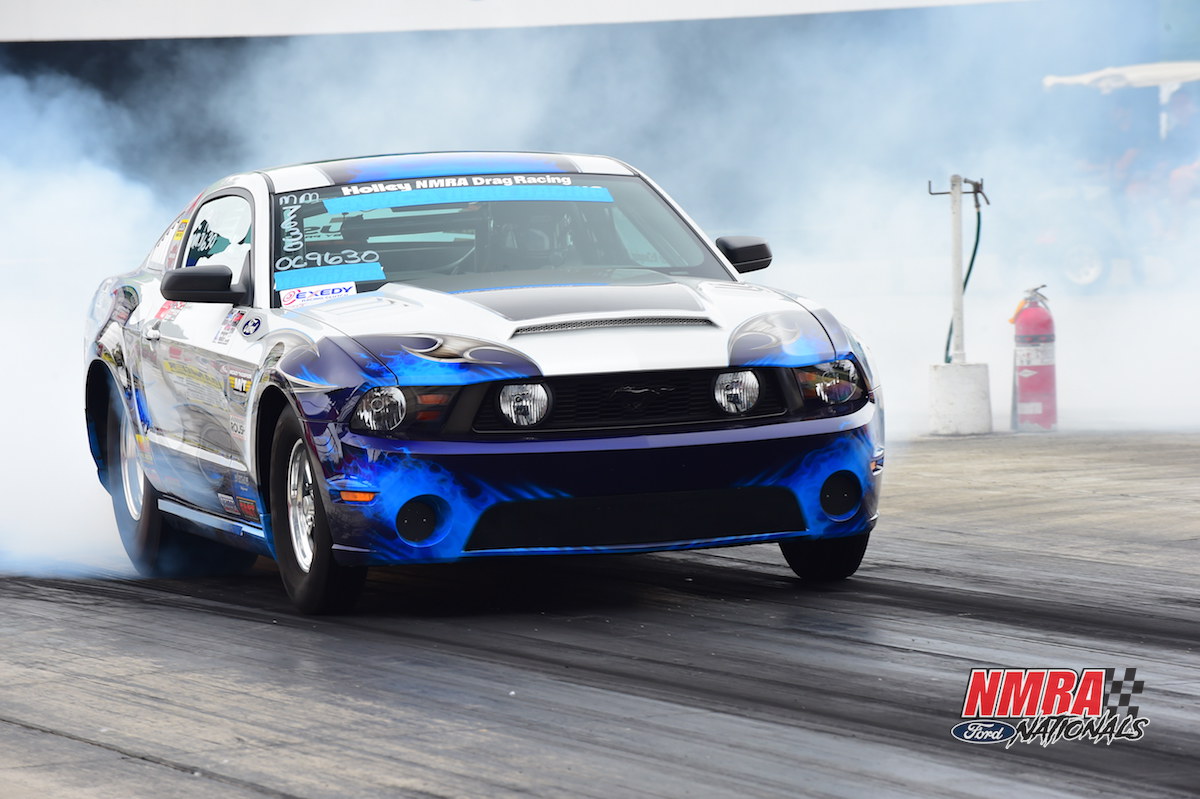 We're happy to announce that the NMRA Ford Performance NationalsÂ will return to Summit Motorsports Park June 10-12, 2022. We're already looking forward to all of the fantastic Fords that are going to fly down America's Racetrack.