We know that properly clamping the cylinder head to the block is essential for sealing the combustion chamber. And we recognize that there's a correlation between combustion pressure and power. So it's a given having the correct head studs (or bolts) for the application in terms of material and fitment is the goal of every engine builder. But how do you determine what's required 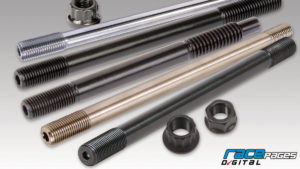 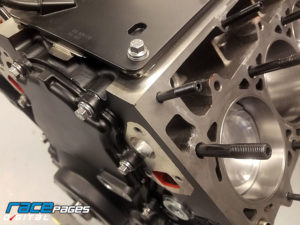 So how does one decide which material to use According to ARP tech guru Jay Coombes, There's really no simple ˜rule of thumb' that can be applied since there are many factors involved. Take horsepower; a big-inch normally aspirated V-8 engine and a highly boosted 4-cylinder engine may both produce 1,500 HP, but the stud material requirements will vary. Coombes added, Many other variables will influence stud selection. These include the cylinder head itself, head gaskets employed, engine application and even the state of the tune-up. Even the surface finish of the block and head come into play. To be sure, an engine builder's experience is important. As a warning Coombes said, There can be instances when incompatibilities in the surface finish and some modern gaskets will have sealing issues regardless of clamp load! 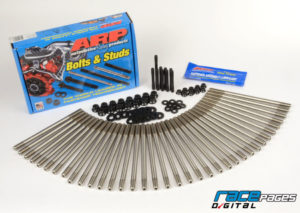 When it comes to fitment, there are over a dozen manufacturers of aftermarket cylinder heads for the Chevrolet LS engine; each of whom offer a variety of different models with varying angles, ports and chamber designs. Multiply that by at least a half-dozen block manufacturers and there are a staggering amount of possible combinations. A similar scenario applies to big block and small block Chevy engines, and to a lesser extent with Ford and Chrysler applications. The latest ARP catalog lists over 50 small block Chevy combinations, 80 big block applications and almost two-dozen LS/LT pairings. But that only covers the more popular ones. How do you determine what's needed for any non-standard head/block combination ARP spells the process out clearly in their catalog, detailing the ten dimensions the firm uses to calculate the optimum head bolt/head stud length for a given application. But there's a lot more involved than simply UHL (underhead length) for bolts and OAL (overall length) for studs. 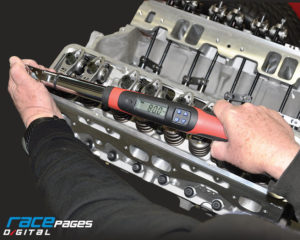 There are three basic metrics involved to determine the optimum fastener length; cylinder head depth, head gasket thickness, and block depth. Of course, often times the design of the cylinder head dictates multiple column heights so that's a factor to contend with. Also, some heads have recessed spot faces, which must be taken into consideration. The bottom line is that the stud most provide ample thread engagement in the block (differs between cast iron and aluminum) and have sufficient thread protruding from the cylinder head column to allow the nut and washer to be preloaded with some threads showing but always be mindful of clearance issues. ARP strongly recommends using a washer, with proper application of the fastener lubricant also important. Recommended tools for gathering data include a properly calibrated caliper that will measure internal and external dimensions (as well as depth) and an SAE or Metric thread gauge. 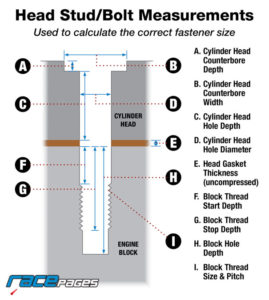 Measuring the cylinder head consists of determining the stud/bolt hole diameter and depth for each column and factoring in any counter-bores. The gasket thickness should be uncompressed. When ARP's engineering team designs a fastener they contend with the actual starting and ending points of the threads in the block to calculate the thread length. The overall block hole depth is also a factor. Thread can be determined by employing an extended thread gauge or an OEM fastener. Most aluminum blocks have SAE coarse thread. For metric fasteners it's important to have the correct thread pitch. If a specific head/block combination is not shown in ARP's catalog the best bet is to gather up the data on your application using the Head Fastener Measurement Sheet on page 22 and call ARP's tech staff at 800-826-3045. Chances are there's a kit that suits your needs.
ARP