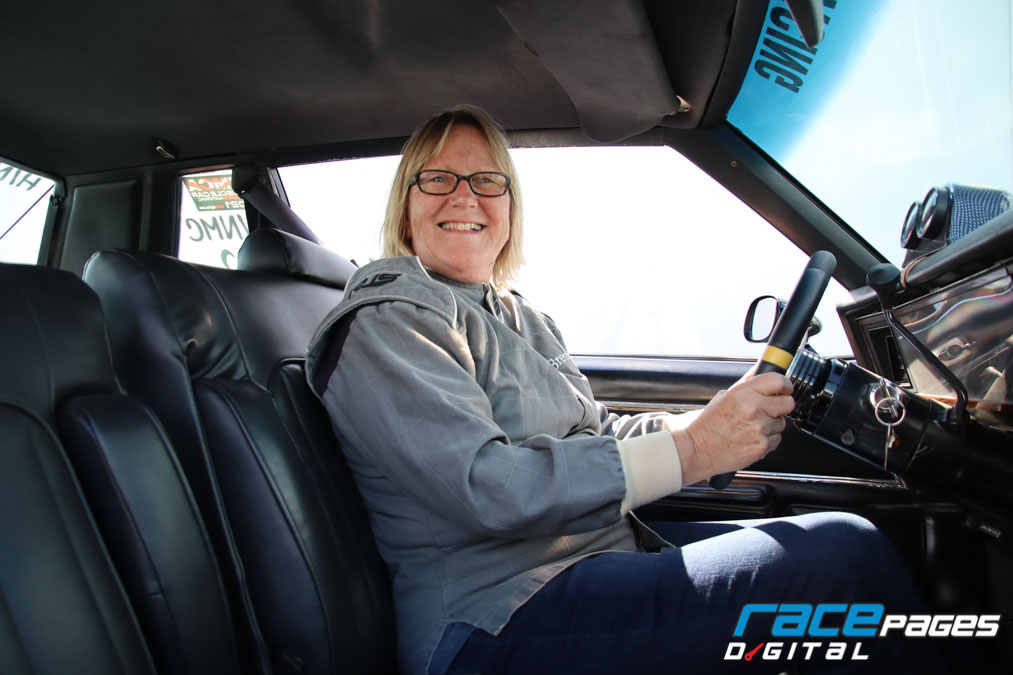 The Tennessean is Aiming for the Top in Her Classic Caprice Interview by Mary Lendzion Photography by the FSC staff Forty-six years ago, Brenda Blair married her husband, Kevin Blair. They were teenagers in love who moved into a modest home in a small town in Tennessee, just five miles from where she was raised. One of Brenda's favorite things was watch Kevin work on and race his cars, including a 1970 Chevelle and a 1974 Vega, and before long, she wanted to race as well. To that end, she climbed into their four-wheel-drive 1978 Chevrolet truck, made some passes at their local track one weekend, and won a race in it the following weekend. 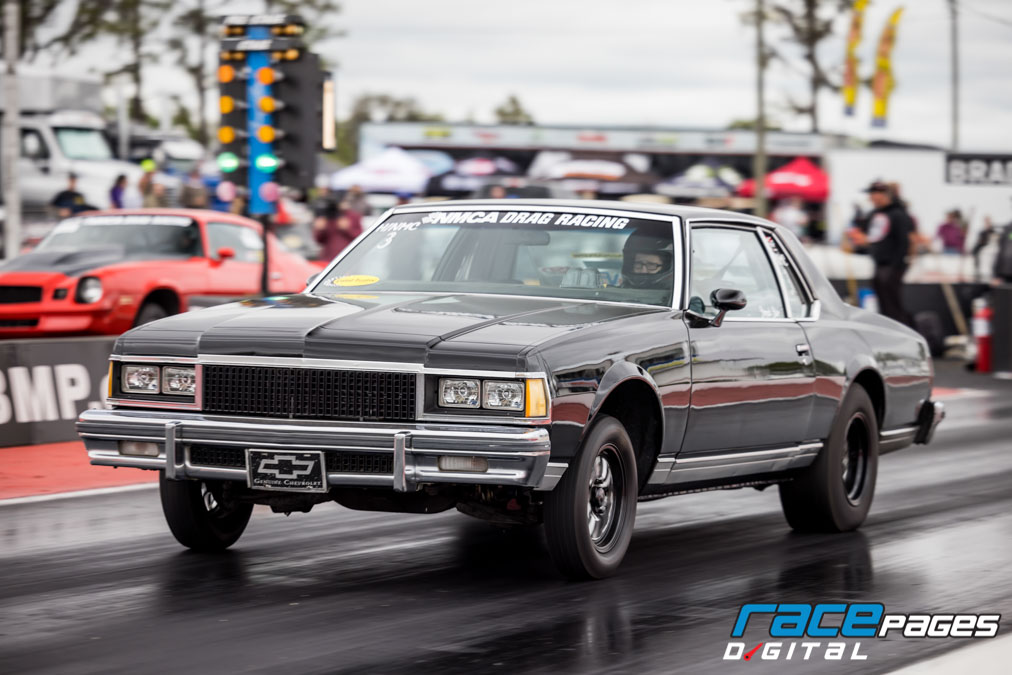 Ready to climb into her own race car, she and Kevin purchased a 1977 Caprice that she could call her own in 1989, and she raced the wheels off it. Wanting to know everything about the car she loved making laps in, she joined Kevin when he worked on it, and she helped him build her engine. That was especially important to her, she says, as it helped her understand how all of her parts and components went together and worked. In 2012, Brenda discovered NMCA Detroit Truetrac Nostalgia Muscle, and she's a fine fit for the category. She was in contention for the category championship in 2020 and 2021, and finished third in points both years while running the 11.75 and 12.00 indexes. She earned her first win the category at the NMRA/NMCA Super Bowl of Street Legal Drag Racing at World Wide Technology Raceway in Illinois in 2020 in her Caprice powered by a small-block Chevrolet which she and Kevin built and backed with a Turbo 350, and she's giving it everything she has to go even further. 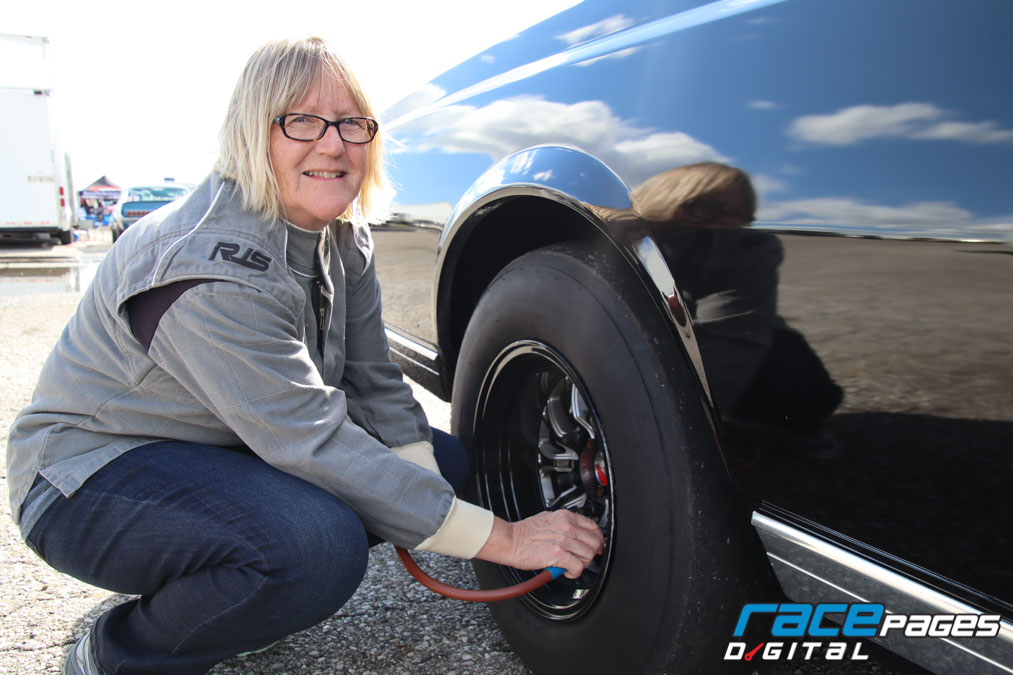 Read on for more about Brenda, who says that years ago, she never, in her wildest dreams, would have imagined that she would be so interested in being a racer. WHAT WAS YOUR UPBRINGING LIKE I grew up in a holler in the country in Tennessee, and helped my family grow vegetables on our farm. I was just a teenager when I married Kevin. We would go watch racing at Buffalo Valley Dragway in Tennessee, and when he started bracket racing on a regular basis, in a 1970 Chevelle, I would go to support him. WHAT DID YOU THINK OF HIS RACING I thought it was the greatest thing ever because not a lot of people around us were racing, and in addition to that, I really liked seeing how well Kevin was doing. He was building his own engines and not outsourcing anything, and he started earning championships in bracket categories, and I could see his hard work paying off. By the early 1980s, we had ventured to Music City Raceway in Nashville, Tennessee and Crossville Dragway in Crossville, Tennessee to race. My father-in-law, Kevin's dad, also raced. HOW DID IT COME TO BE THAT YOU WOULD RACE, TOO One day we went to the track to race, and my mother-in-law told me that I should race, too, and that a friend had a wife who raced, and she felt that if she did it, I should be able to do it, too. We had a four-wheel drive 1978 Chevrolet truck that we were using to tow my husband's car, and the following Sunday, I raced that four-wheel drive Chevrolet truck at Buffalo Valley Dragway. I got beat in the first round of eliminations when I broke out, and when I got back to the pit area, my husband told me about letting out of the gas to avoid breaking out, and I went back the next Sunday and won. That was in 1988. DID THAT PROPEL YOUR PASSION TO RACE It sure did. By the following fall, I wanted to race my own car so badly. I wanted a Malibu, but we had two sons and couldn't afford one. We ended up buying my Caprice from one of my husband's friends for $1,500. 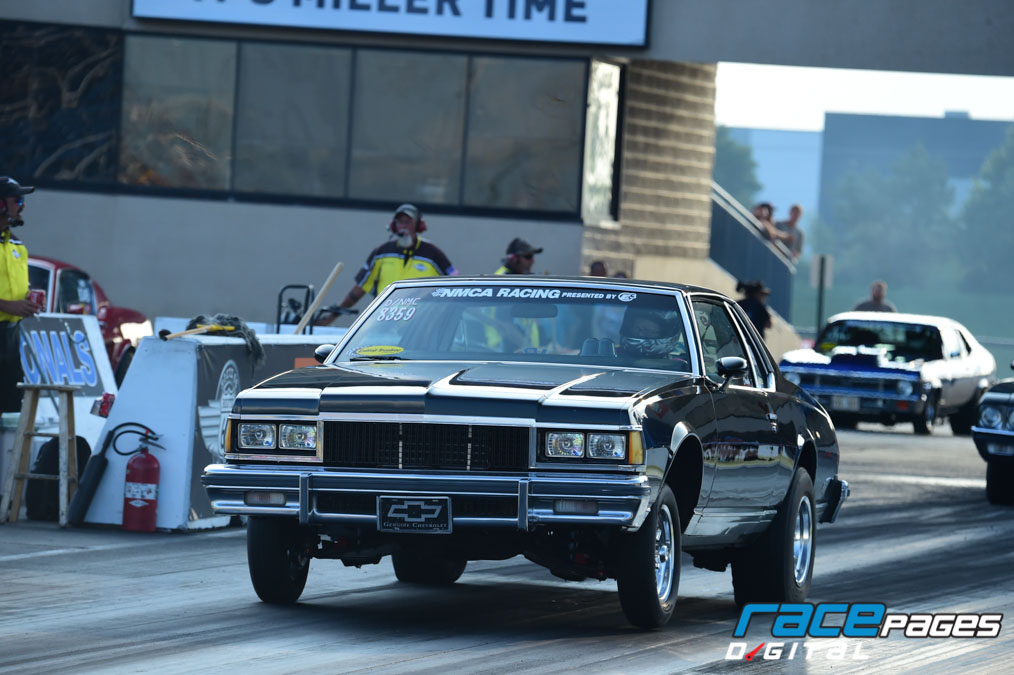 WHAT CONDITION WAS THE CAPRICE IN There was not one dent on it, but the previous owner had washed it so often that the paint had faded. The car had a 350 cubic-inch engine and wire hubcaps, and we didn't do anything to it when I first started racing it at Music City Raceway and Crossville Dragway. I did pretty good, and I had some runner-up finishes. We started racing more at Music City Raceway more than Crossville Dragway in the later part of 1988, and I won enough by the end of that year to pay for the car. DO YOU FEEL THAT RACING CAME NATURALLY, DESPITE THE FACT THAT YOU WEREN'T EXPOSED TO IT IN YOUR YOUTH I do, although I learned a lot by watching Kevin race for years. He helped me a lot, and gave me a lot of tips, but he had me come up with my own dial-ins. I wanted to be good and I wanted to be competitive, and during a track banquet for Music City Raceway one year, racers who had done well were given jackets, and I told Kevin that I was going to earn one of those jackets. When I earned the championship in the Street class in 1990 at Music City Raceway, they were giving windbreakers instead of the nicer jackets I had seen, but that was fine. I earned a championship in Street at Buffalo Valley Dragway that year, too. I was in 23 finals and won 17 of them. That was a good year, and then in 1992, I earned a championship in Heavy at Beech Bend Raceway in Kentucky. Around that time, we started doing different things to the car so that it would be more consistent at the track, but I continued to drive it to track. WHAT WAS IT LIKE TO BE RACING WITH YOUR HUSBAND He was racing in the Pro class, which was the next class up from the Street class I was racing in, and we did everything together. We talked about our cars, what we did right, what we did wrong, what we needed to improve and so much more. We looked at all of our timeslips together, and Kevin always told me that I did a good job of relaying information to him about the car, like if the engine didn't sound right going down track. He always gave me a good car. I only broke down on the way to the track twice, and one time, it was a water pump and the other time, it was a rocker arm. WHAT COMPELLED YOU TO COME TO NMCA DETROIT TRUETRAC NOSTALGIA MUSCLE The track was going to get rid of the Street category, and Kevin started seeing more and more information about the NMCA and Nostalgia Muscle, and he told me that he found a category for me. We started doing that in 2012, and I was running 13.50s at that time with a 383 cubic-inch Chevrolet engine with stock parts. We started trailering the car at that time. I went to the races in Atlanta and Bowling Green, and we found out quickly that racing in Nostalgia Muscle was a lot more difficult than it looked. 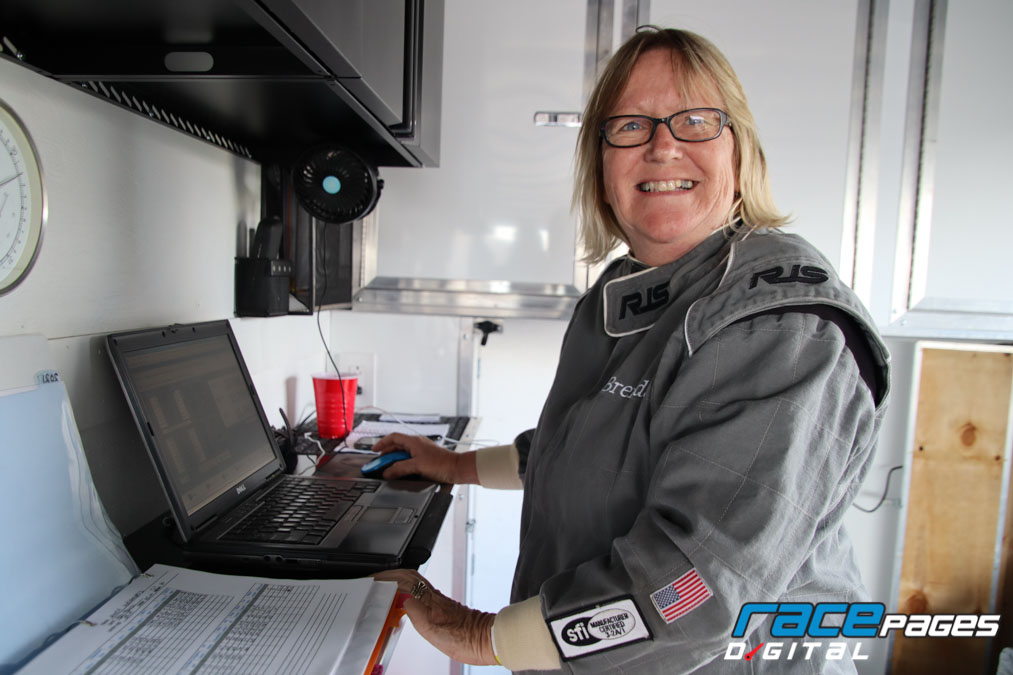 DID YOU CONTINUE TO RUN THE SAME COMBINATION YOU HAD BEEN RUNNING, OR DID YOU MOVE TO A DIFFERENT COMBINATION IN 2013 We wanted to pick the car up so that I could run a slightly quicker index. I call this engine my name-brand engine because Kevin used name-brand parts, not stock parts, when he built it. My car ran a lot faster with the new engine than we thought it would. We thought we would run 12.50s but we ran 12-flat. It was a pleasant surprise, and on top of that, we were running more consistent numbers. YOU STARTED 2021 OFF STRONG, AND YOU WERE EVEN IN THE CHASE TO THE CHAMPIONSHIP BEFORE ACHIEVING A THIRD-PLACE FINISH IN POINTS. It was great to win the first race of the year in Florida, and then to go rounds in Georgia and Illinois. My first round-one loss of the year was in Michigan. We were happy with how everything was going, and to have led points for a few races. WHAT INSPIRES YOU TO KEEP RACING It's definitely my love of the sport, and I want to earn a championship very badly. I had a slight chance in 2020, and a better chance in 2021, and that made me want it even more. The category is getting closer and closer, and everyone is getting better and better on their reaction times and with their indexes. I work very hard to keep my reaction times down, and to make my car run the index, but it is definitely a struggle. WHAT WORK, IF ANY, WILL BE PERFORMED ON YOUR CAR AND COMBINATION OVER WINTER We're going to freshen the engine up, and hopefully, we'll get all of the parts that we need to do that in time. WHAT ARE SOME THINGS THAT YOU ENJOY DOING WHEN YOU'RE NOT RACING I like to work outside, and do vinyl lettering, graphics and design. Over the years, I have worked as a typesetter at a newspaper, and I have worked in accounts payable, as a cashier, and as an office manager, but I stopped so that I could take care of our grandchildren. We now have six grandchildren, and I like to spend time with them, and our sons, Corey and Chris. Our son, Chris, also races, and his son, Gage, races a junior dragster and is very successful. He calls me from the races to tell me how he did, and it's pretty special to have my grandson doing that. (Interview from the January 2022 issue of Fastest Street Car) 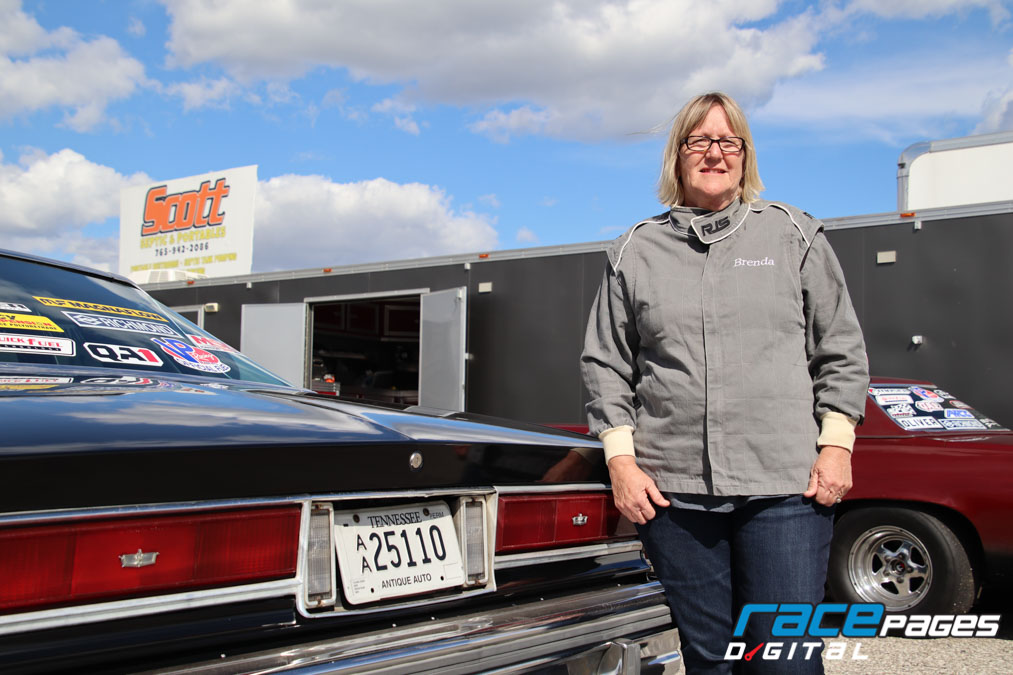