Written by Ainsley Jacobs The final big throwdown event of the season for the western half of the country, the Street Car Super Nationals 17 at the Strip at Las Vegas Motor Speedway in Nevada, served up some Sin City-sized action and excitement in mid-November. Entered into the Pro Mod category, 2017 NMCA VP Racing Lubricants Xtreme Pro Mod champion Steven Summers and his menacing Summers Motorsports 2016 Chevy Camaro obliterated the scoreboards with a string of high-speed runs. Summers kicked off the event with some testing on Wednesday but conditions weren't favorable. The track came around by Thursday, and we made our first full pass during the first qualifying session and went 5.65 at 269.40 mph, shared Summers, who had a soft tune up in at the time and wasn't utilizing his lock-up torque converter, either. He went on to win the $1,000 Larry Jeffers Race Cars Pass 4 Cash shootout that evening with an even quicker 5.59 at 274.16mph blast. Summers sat out the next qualifying session to help save wear and tear on his combination. Going for a big number in the third session, the car spun its tires and the driver aborted the run. On the fourth qualifying run, I had to pedal the car in a big wheelie, but it still went 5.581 at 274.78 mph, noted the driver. I wanted to get in the .40s, but everyone had oil downs and there were other delays, so we did the best we could with what we had. Qualified second overall and with Marc Meadors in the top spot on a 5.578 at 271.08mph trip, Summers had still set the top speed for the class. In eliminations, Summers backed up the speed with a winning 5.561 at 274.11mph hit (including a 0.983-second 60-foot time) during the first round. Last year, I was running six numbers quicker to the 300-foot mark because the track was better, so if I had run that this year, I know I could have gone 5.49, he said of how close he came to reaching his goal. Summers made it to the semi-final round of eliminations later in the night, but the race was ultimately called as the track was too cold to continue. 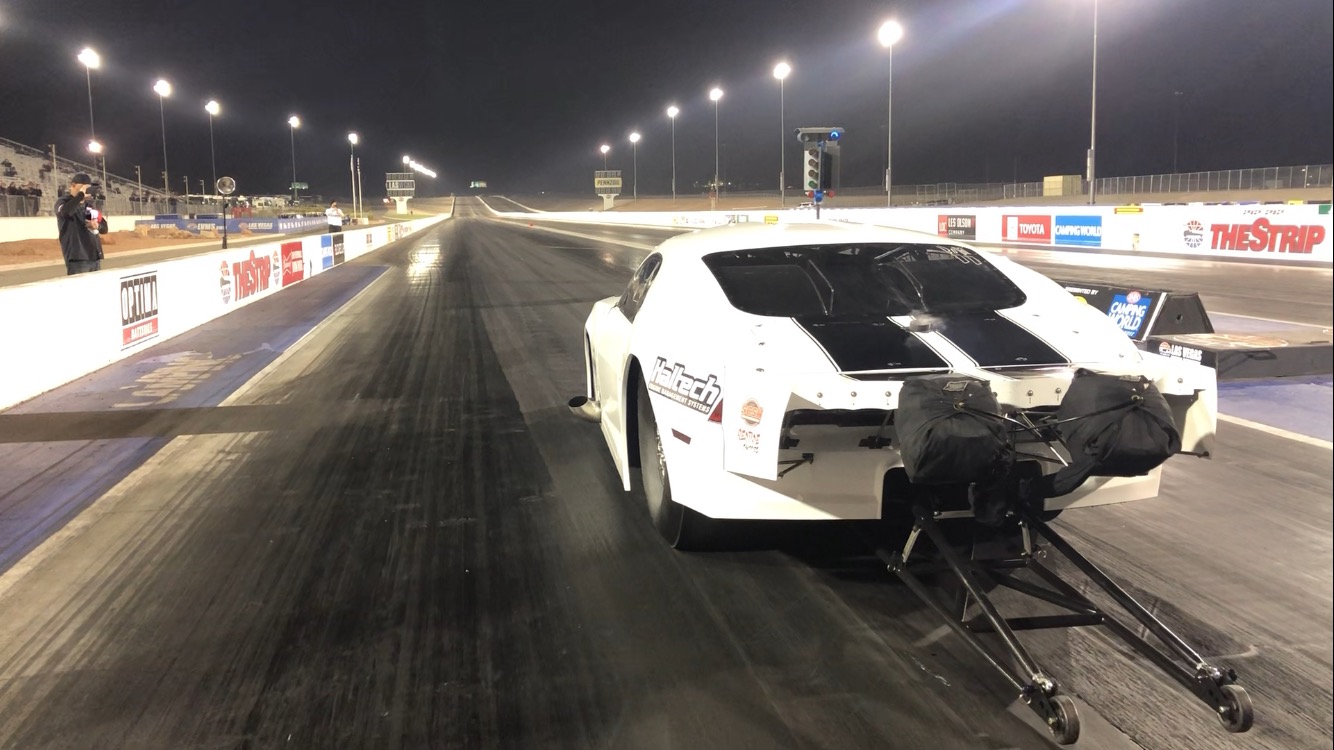 Summers has, historically, always run high speeds with his Camaro but hadn't ever really turned it loose in the quarter-mile before. I think we could run more, 278 or 279 mph, which is where the current doorslammer record is, but it gets sketchy out there when you pull the ˜chutes at that speed, he laughed, not wanting to press his luck after having already rubbed the wall at the NMCA event in Martin, Michigan, earlier in the season. Being part of such a high-speed club is an exclusive honor, and Summers's success is a direct result of the parts and pieces he's chosen to runalong with his expert tuning abilities, which he also offers to his clients through Summers Motorsports. The Camaro's engine is based on a CFE Racing Products block and heads that are filled with pressurized air from a set of twin Garrett G57 turbochargers. Summers credits the reliable and heavy duty turbochargers for being the reason as to why his car's performance has improved significantly lately. The Haltech Elite Race Expansion Module System (REM) in conjunction with the Elite 2500 ECU, too, has had a ton of updates lately that's adding up to good things for the turbo combinations, explained the man who is also backed by Liberty Gears and Extreme Racing Oil. I've upgraded a lot of my customers to the R5 and they have all picked up performance and run new personal bests, so I'll be switching my car over the off-season as well. With his 2021 season wrapped up, Summers has a lot to celebratefrom his own achievements to wins with customers on both small tires and big tires, and also on the no prep circuitbefore it's time to roll full speed ahead in 2022.
CFE