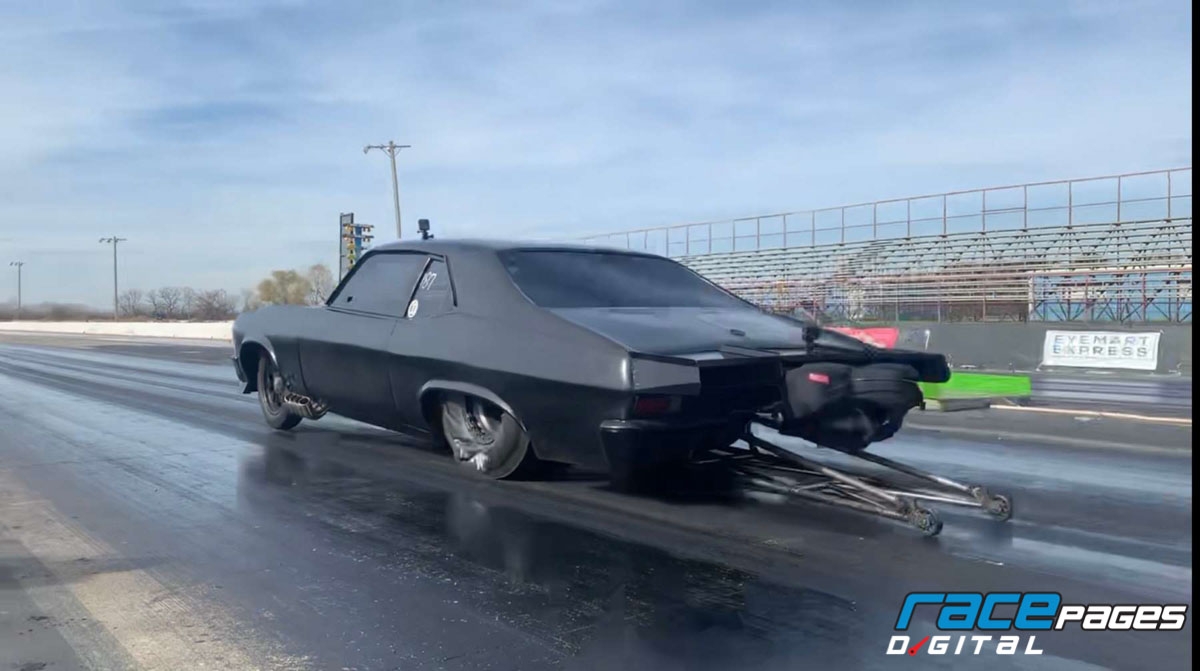 Even though Street Outlaw’s superstar Shawn Ellington made his quickest passes ever with his infamous “Murder Nova” 1969 Chevrolet Nova on the street, he realized the original just wasn’t enough to stay on top of “The List.” So, Ellington made the decision to build an all-new chassis while still sticking with the OG car.

In May of 2021, Ellington had 187 Customs’ Murder Nova transported from Oklahoma to Massachusetts where it was delivered to Dennis MacPherson and the team at DMC Racing.

“The OG Murder Nova really wasn’t built to do no prep, but it evolved from being a former Pro Street car to what it is today,” explained MacPherson of the old, square-tube chassis that had been spliced onto stock front frame rails and a back-half kit. Originally, MacPherson intended to simply build a roller for Ellington, but that quickly escalated into a full-blown, turn-key build with as much titanium and carbon fiber as could possibly be used. The guys got started by cutting the Murder Nova’s body off of its old chassis and putting the entire thing on the jig table to build an all-new platform. The result was a state-of-the-art, double frame rail, chromoly chassis that Ellington deemed so pretty that he intentionally chose to keep it looking like bare metal.

Paint by Wicked Design sprayed clearcoat over DMC’s fabrication handiwork to preserve the “bare metal, jut finished welding” look before the original Murder Nova’s body, which still retains the factory steel roof and quarter panels as well as the VFN fiberglass front end and doors, was carefully placed on top. More than 300-pounds lighter, the “new old” Murder Nova also sits significantly lower to the ground, but is still able to easily fit a 36-inch tire under the massive carbon fiber rear wheel tubs done by DMC. Carbon fiber floors, a carbon driveshaft tunnel, and an ISP pour-in carbon seat were also on the ticket and helped the car shed extra weight.

Integrated into the hind end of the rejuvenated Murder Nova was a Merillat Racing rearend housing with matching four-link brackets, while shocks and struts from Chris Bell at Kinetic Engineering were added on the corners. However, the chassis upgrade itself wasn’t enough for Ellington as he also made the decision to ditch his longstanding twin-turbo setup in favor of a ProCharger supercharger.

“We built the zoomies for the new ProCharged big-block Chevy and wired in the FuelTech FT600 system,” added MacPherson, whose team completed everything from plumbing to paint all in-house at DMC Racing. “It’s sentimental to him, so it was important that it be super nice,” noted MacPherson, who took extra care to ensure the project was completed well beyond Ellington’s expectations. The finished car was unveiled to its owner in late November, just a few short months after work began.

Ellington was so thrilled with the result that he drove his new old Murder Nova right out of the shop and straight into the trailer so that he could head out to test as soon as possible. Unfortunately, the new car blues struck in a big way when the engine suffered a catastrophic failure in December. Preliminary reports, however, show that the DMC chassis is working better than the old one ever did, as a 1.01-second 60-foot time is a new personal best for the Murder Nova in any configuration.

It was a mad thrash to get everything fixed up, but Ellington and team prevailed. Thanks to the miraculous help of partners and almost as if by a miracle, the DMC-built OG Murder Nova was able to make it to the filming of season 2 of the Discovery Channel’s Street Outlaws: America’s List in early January of 2022.