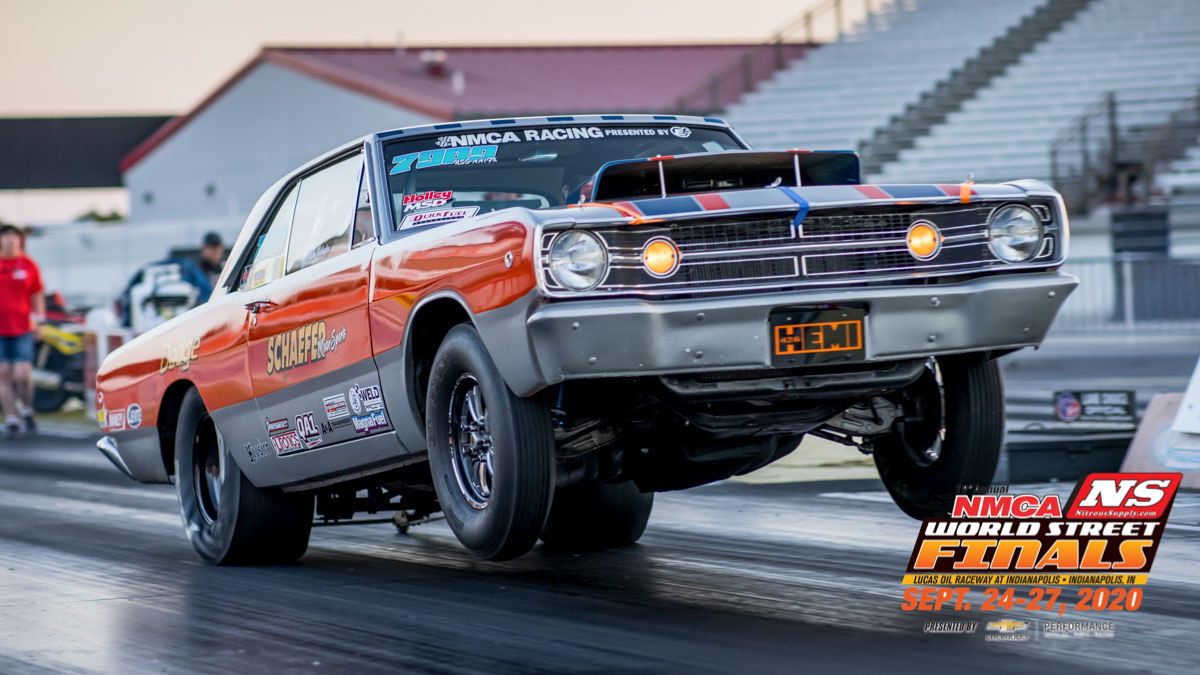 Mike Schaefer is no stranger to the Aerospace Components Winner's Circle at NMCA events, and he found his way there once more on Saturday after defeating Matt Bonnett to take the win in the Fuelab Nostalgia Super Stock All-Star race, which pitted the NMCA Nostalgia Super Stock racers agains the Victory Nostalgia Super Stock racers. Making the win even more special, Shaefer had a perfect run during eliminationshe left the line with a .000-second reaction time, and ran 9.000 on his 9.00 index toÂ take the round win . With an 8.51-second, three-run average, Greg Edwards drove to the Aerospace Components Winners Circle in TorqStorm Superchargers True Street in his twin-turbocharged, LS-powered Camaro SS. Scott Oshinski was the runner-up with a 9.07 average in his Cutlass. Also standing out were Wesley Butler, the 9-second winner, Casey Flore, the 10-second winner, Bob Hoffman, the 11-second winner and Jan Sorenson, the 12-second winner. Rounding out the category were Anthony Jager, the 13-second winner, Rick Doern, the 14-second winner and Elaine Moistner, the 15-second winner. 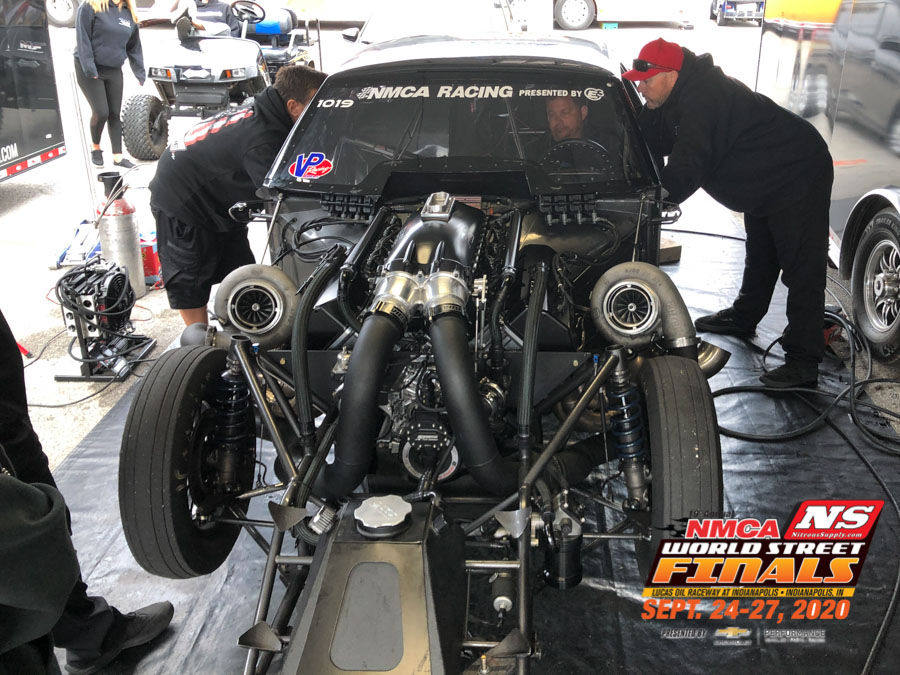 After a consistent weekend of top-level performances on track, as well as posting the biggest speeds of the weekend in his VP Racing Lubricants Xtreme Pro Mod Camaro, Jeff Rudolf is not likely to make the first round of eliminations. The team found an issue with the transmission and took it to Chicago last night for repair. They arrived back at 5am this morning, but after installing the transmission, problems still existed. It's a tough break for the team and the Pro Line Racing-powered and Jamie Miller-tuned machine that has been making huge strides in performance. 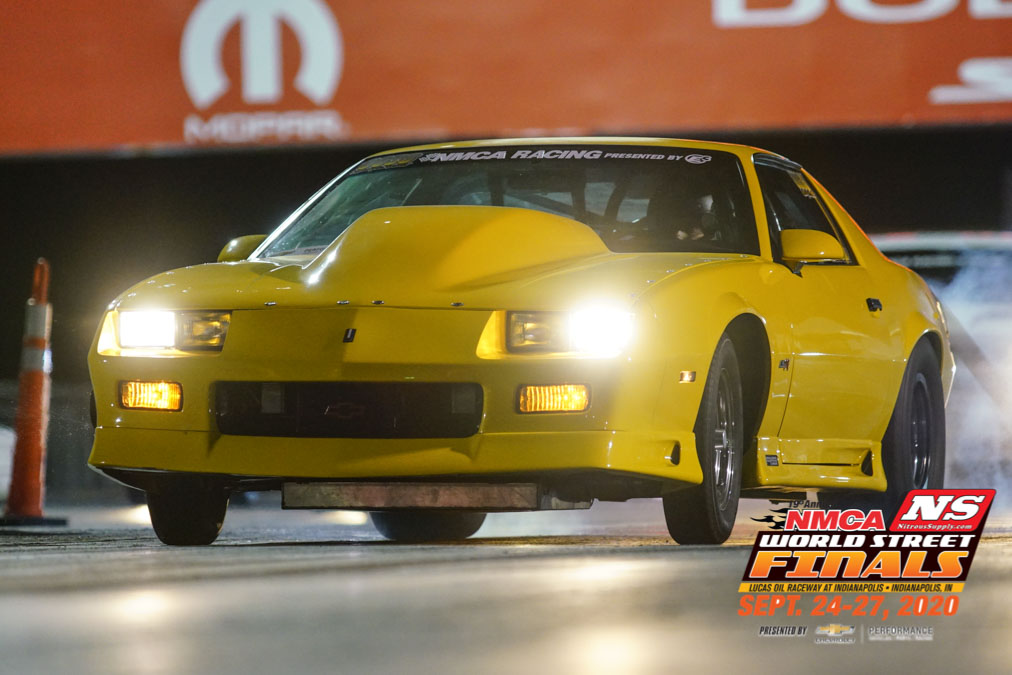 John Revor of Fairland, Indiana, slipped into the Chevrolet Street Car Challenge at the last minute with his LSX-powered 1991 Z28 Camaro. Revor has another Camaro that runs mid 11s and has run True Street several times, but he wanted to go quicker and found this chassis with many of the chassis upgrades already done. Its been built to Xtreme Street/Ultra Street rules and is now powered by a 370ci, 6.0-liter based engine with Aries Racing Technology-ported LS3 heads, a Holley intake and Bullseye 83mm turbocharger. Once NMCA True Street winner Chris Bishir set up the base tune on the Holley EFI, Revor was off to the track. Rick DeVito has helped with the on-track tuning and the Camaro has gone a best of 8.97 at 154. Revor unfortunately was DQd from the Street Car challenge for safety reasons, but he clocked an 8.97 and a 9.15 on a soft tuneup. 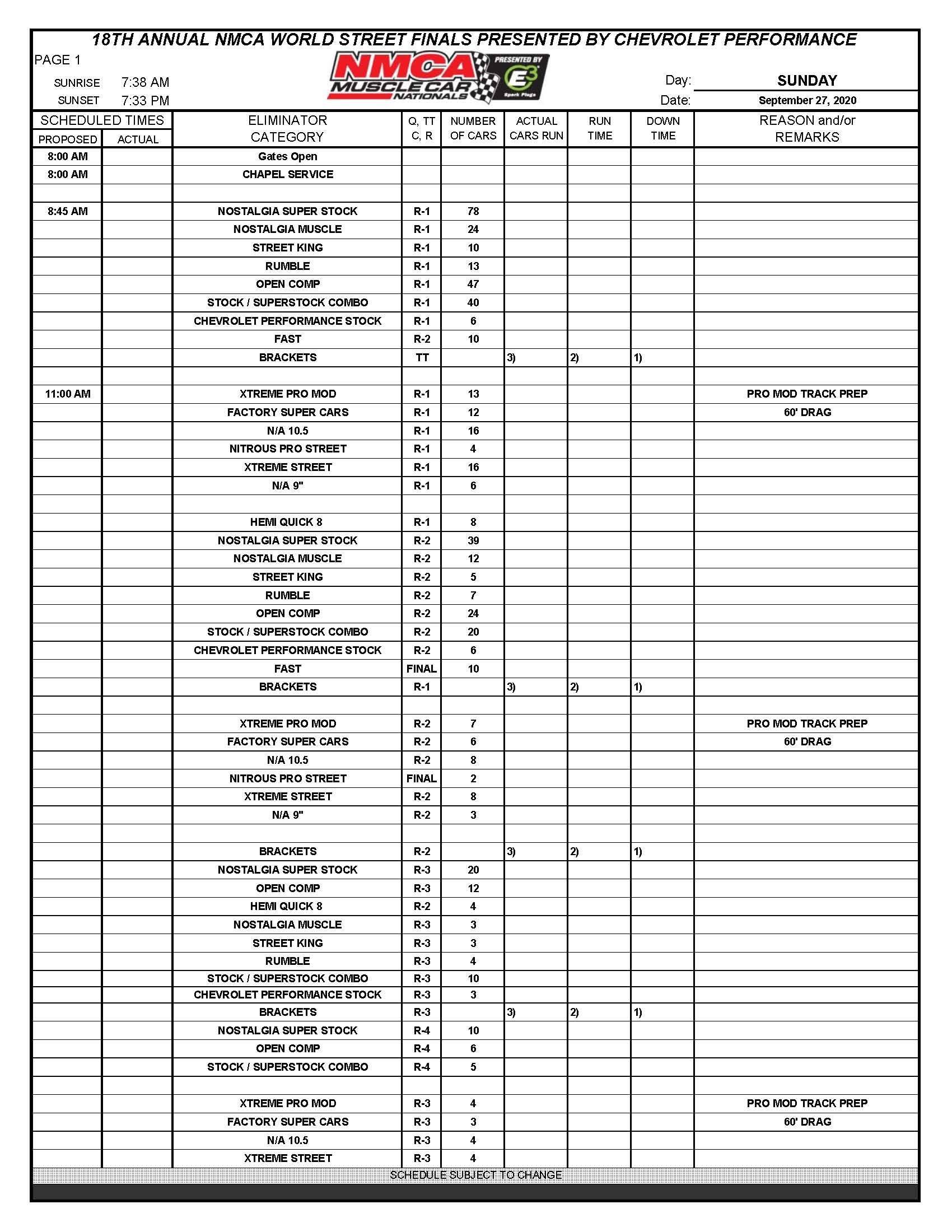 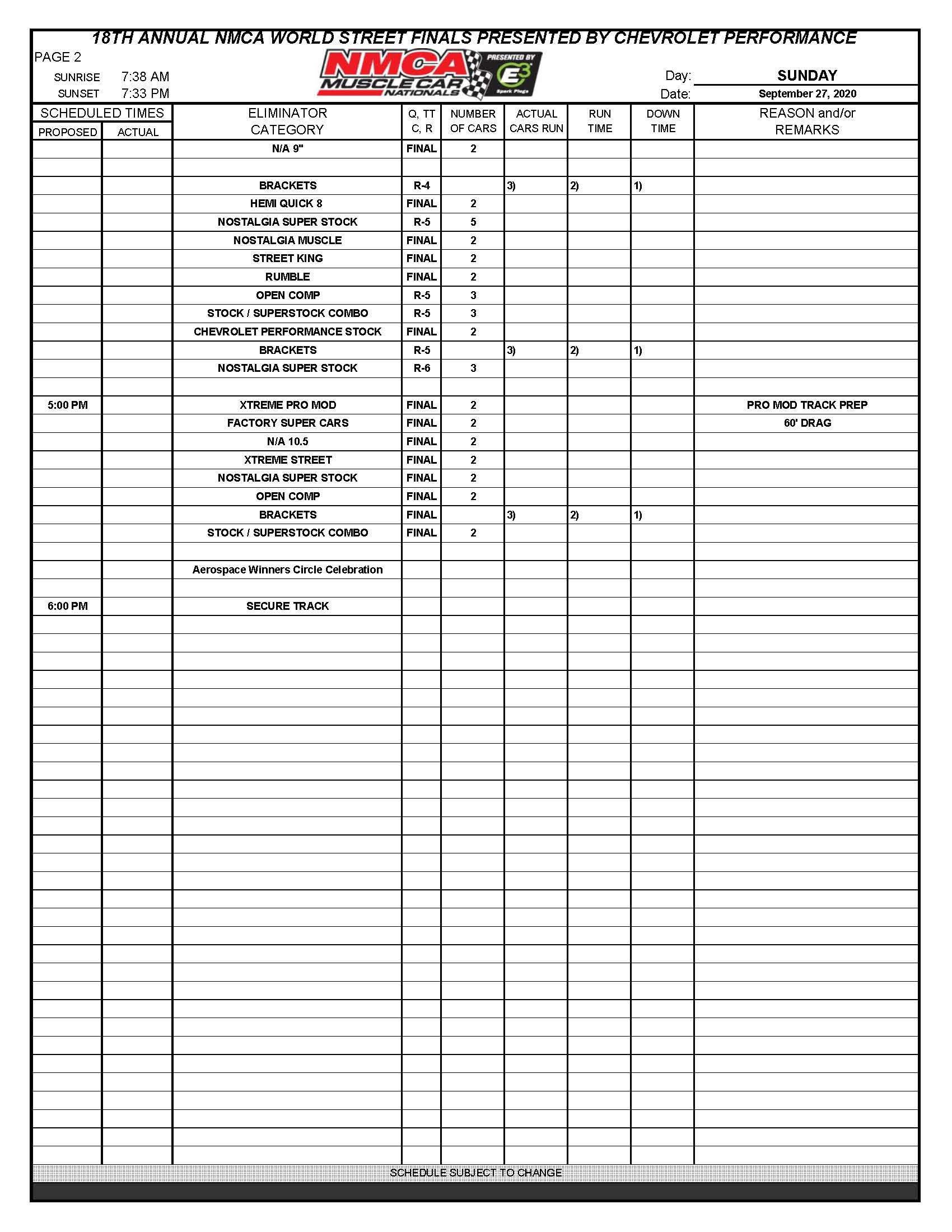 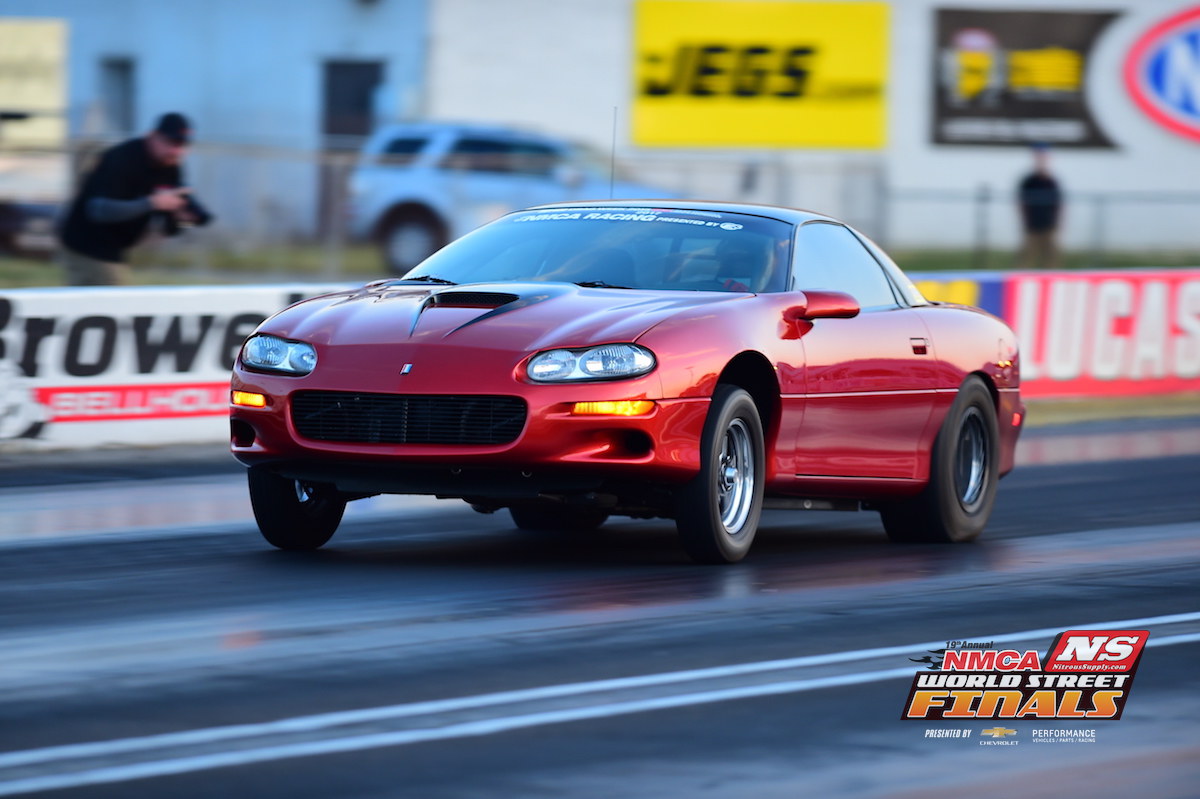 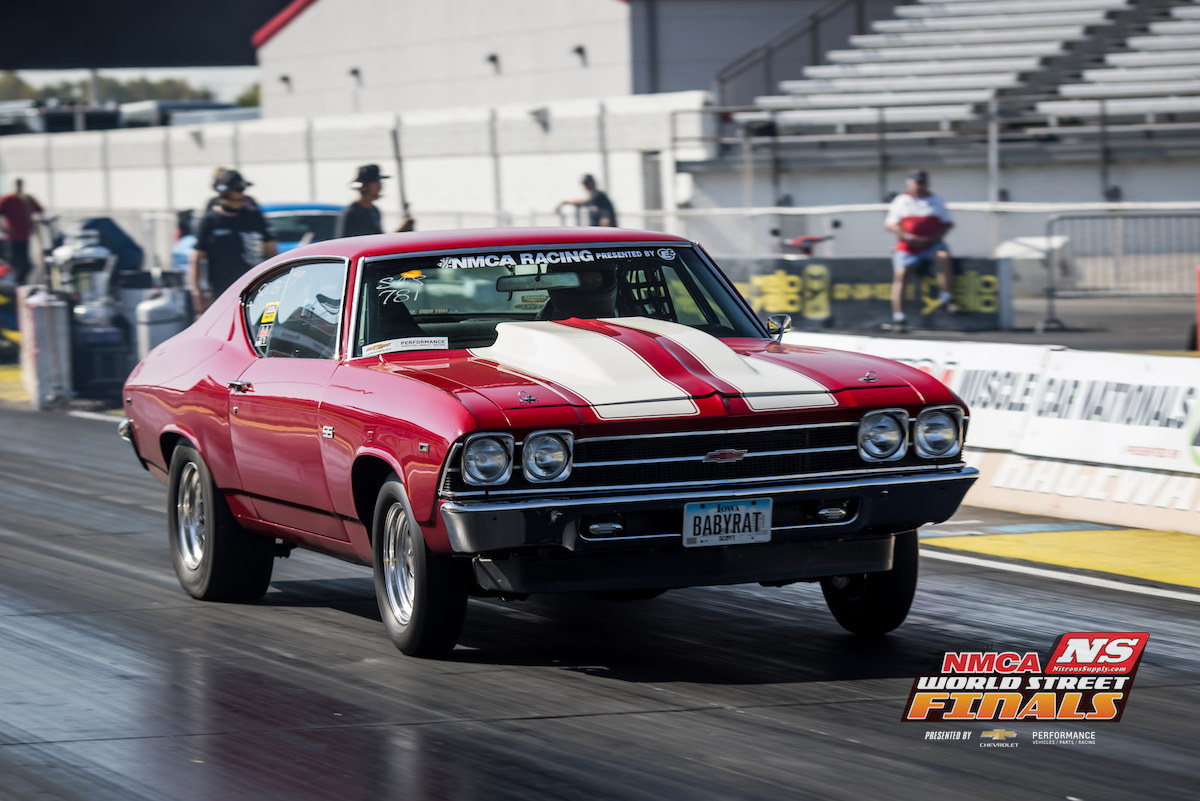 In the Chevrolet Performance Street Car Challenge, Bill Schwarz earned the event win with an 8.56 average in a super-clean Chevelle, and Terry Faust earned the runner-up with an 8.96 average in a Corvette. Also successful this weekend were Stephan Chechak, the 9-second winner in a Firebird, Matthew Pouge, the 10-second winner in a Cutlass, Kevin Rowand, the 11-second winner in a Corvette, Lonnie Sinclair, the 12-second winner in a Camaro, James Jekel, the 13-second winner in a Skylark and Cody Wright, the 14-second winner in a Camaro. Dart NA 10.5 presented by Diamond Pistons drivers John Langer and Joe Clemente had a bit of drama during the third round of qualifying yesterday when the deployed chute on the back of Langers Firebird got hung up on barrels of sand on the top end of the track, and the deployed chute on the back of Clementes Mustang got hung up on the wheelie bars on the back of Langers car, breaking them into seven pieces. Langer, whose car also sustained some body damage, thought his weekend was over, butÂ  Steve Matukas of Matukas Motorsports, who had completely rebuilt Langers longtime car in just 61 days in the winter of 2018-2019, told him that his weekend was not over, and that he would fix whatever needed to be fixed. Matukas found the materials he needed, borrowed a welder from fellow racer Susan Roush McClenaghan, put together a new set of wheelie bars and performed some body work on Langers car. Soon after, Langer won the first round of eliminations with a 7.94 against Frank Hoffman, and is preparing for the second round of eliminations.

ELIMINATIONS ARE UNDERWAY. CLICK HERE FOR RESULTS AS WE RECEIVE THEM.