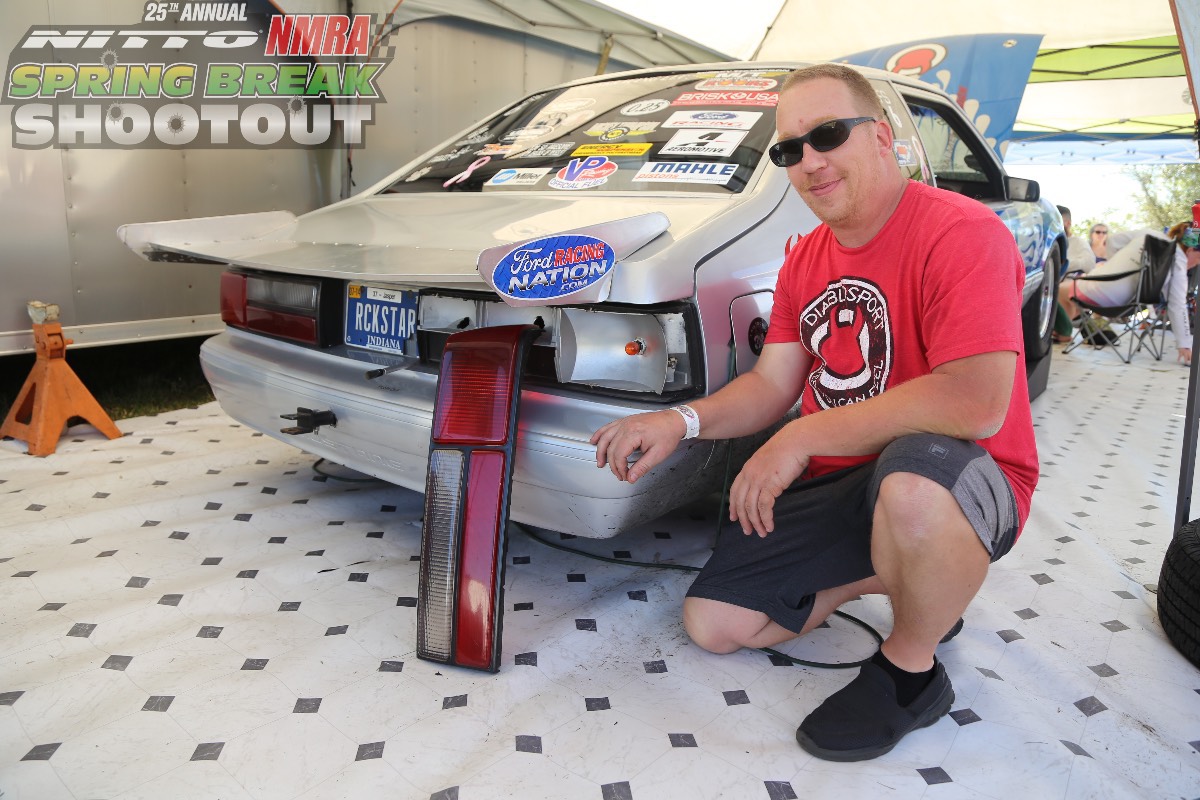 Under the warm rays of the Florida sunshine, Ford racers from across the country gathered at Bradenton Motorsports Park for the 25th Annual Nitto NMRA Spring Break Shootout. While one of the quickest fields of QA1 True Street racers in NMRA history and the Blue Oval battle that is the Watson Racing Cobra Jet Showdown were settled on Saturday, most classes wrapped up qualifying to set the stage for todays eliminations where surviving each round puts racers one step closer to achieving their early season goal of notching a victory. 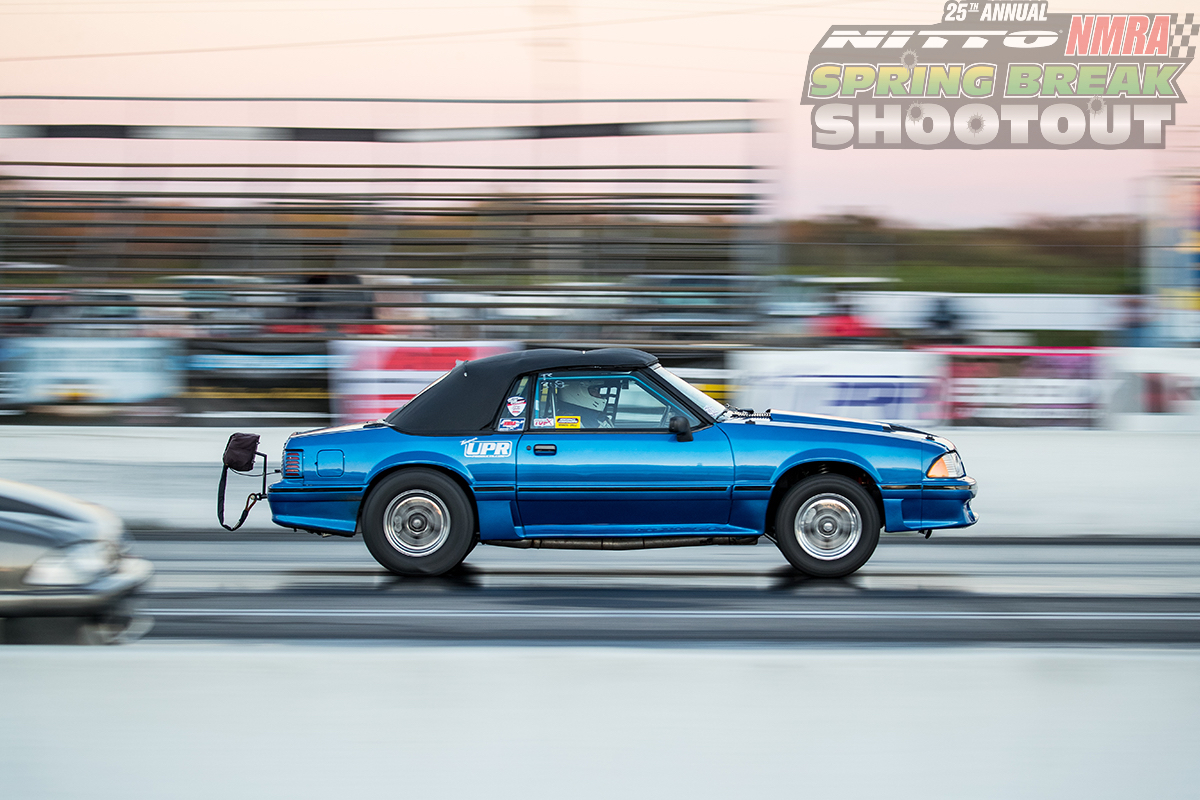 In some of the fiercest racing in QA1 True Street competition it was the first time in the NMRA that not one, but two True Street racers averaged in the 7-second zone. After surviving a 30-mile cruise and three back-to-back laps, it was Jeff Bloem who took top honors with a 7.904 average, narrowly besting runner-up racer Mike Jovanis 7.97 average. Not only does Bloem earn bragging rights for the season opener and a trip to the Aerospace Components Winners Circle, but he earned a coveted slot in the inaugural IDIDIT PerformanceÂ King of the Street, which will pit the eight quickest True Street racers of the season the six event winners and the top contestants in the Spring Break Shootout and Gateway Rumble in a Saturday night shootout at the Nitto Tire NMRA All-Ford World Finals. 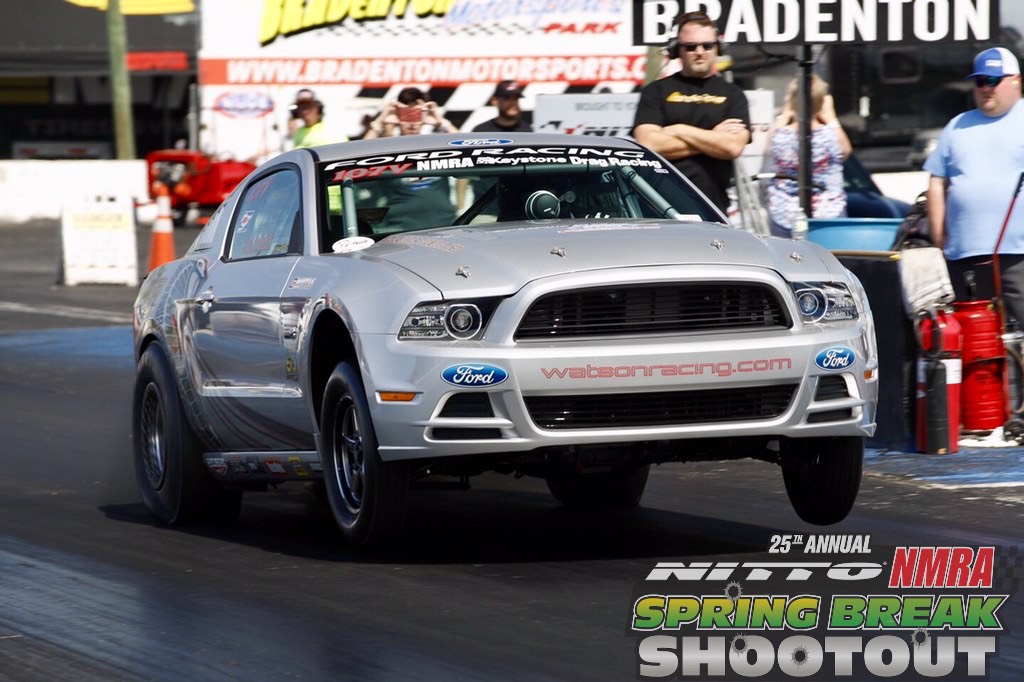 In a clash of classic and modern Cobra Jet racers, it was Paul Rodericks 2013 CJ that ascended as the victor in the Watson Racing Cobra Jet Showdown. He ran consistent low-nines to head to the final round against David Swansons 2014 CJ. As the lights on the tree went down, Swanson lit the red bulb and Roderick stayed consistent to head to the Aerospace Components Winners Circle with a 9.14 at 149.60. 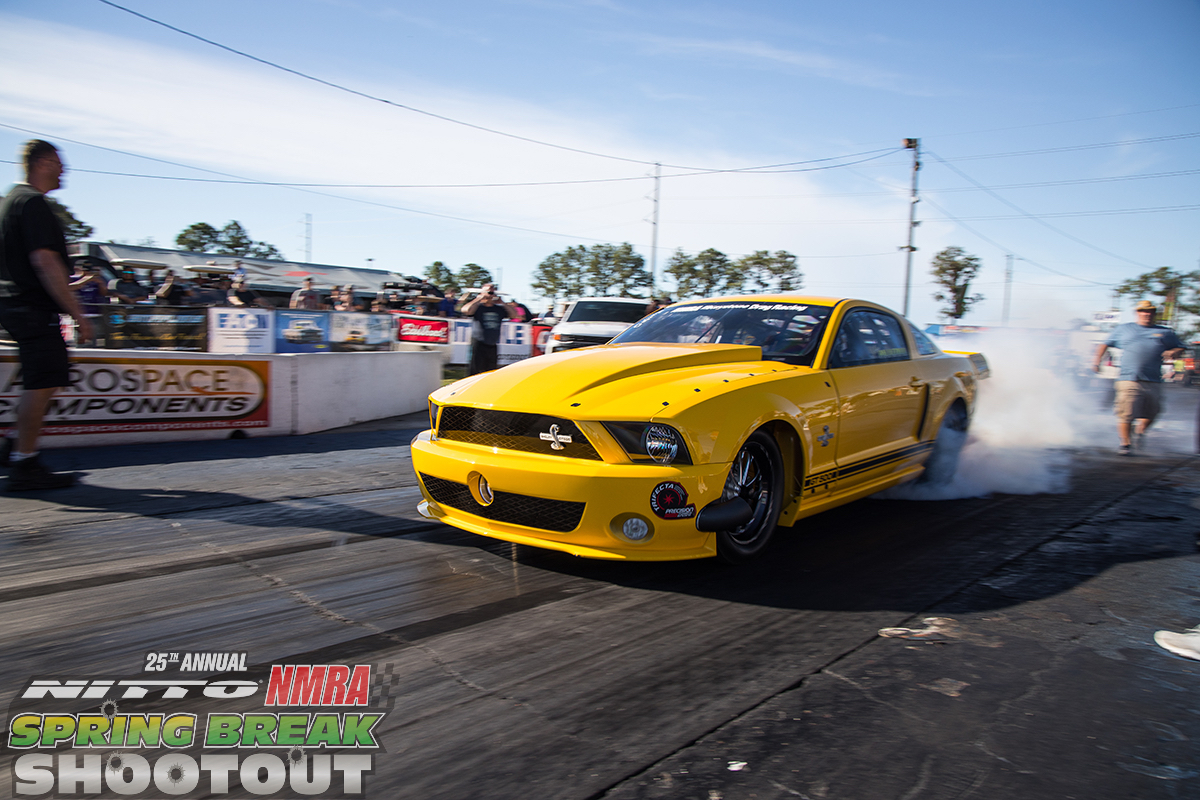 With the top four in VP Racing Fuels Xtreme Street running in the 4-second zone, the competition was tough. However, it was Vincent Palazzolo who narrowly nabbed number-one qualifier honors. He just edged Eric Leepers 4.476 with a 4.470 pass of his own. 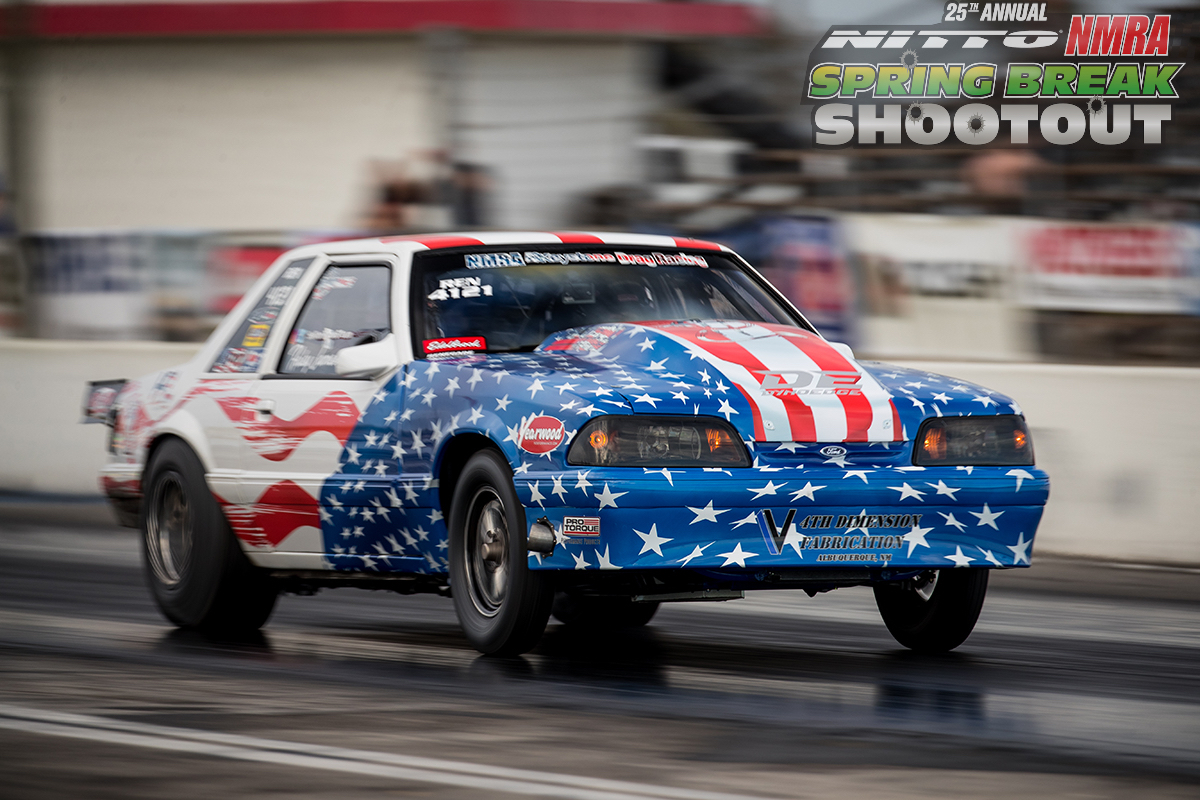 So far Haley James transitioned smoothly into Edelbrock Renegade. Picking up where she left off in her previous class, Haley piloted her revamped Fox to the top qualified spot courtesy of a 4.81 at 146.65 mph. She is determined to bring home the win today and collect a record along the way. 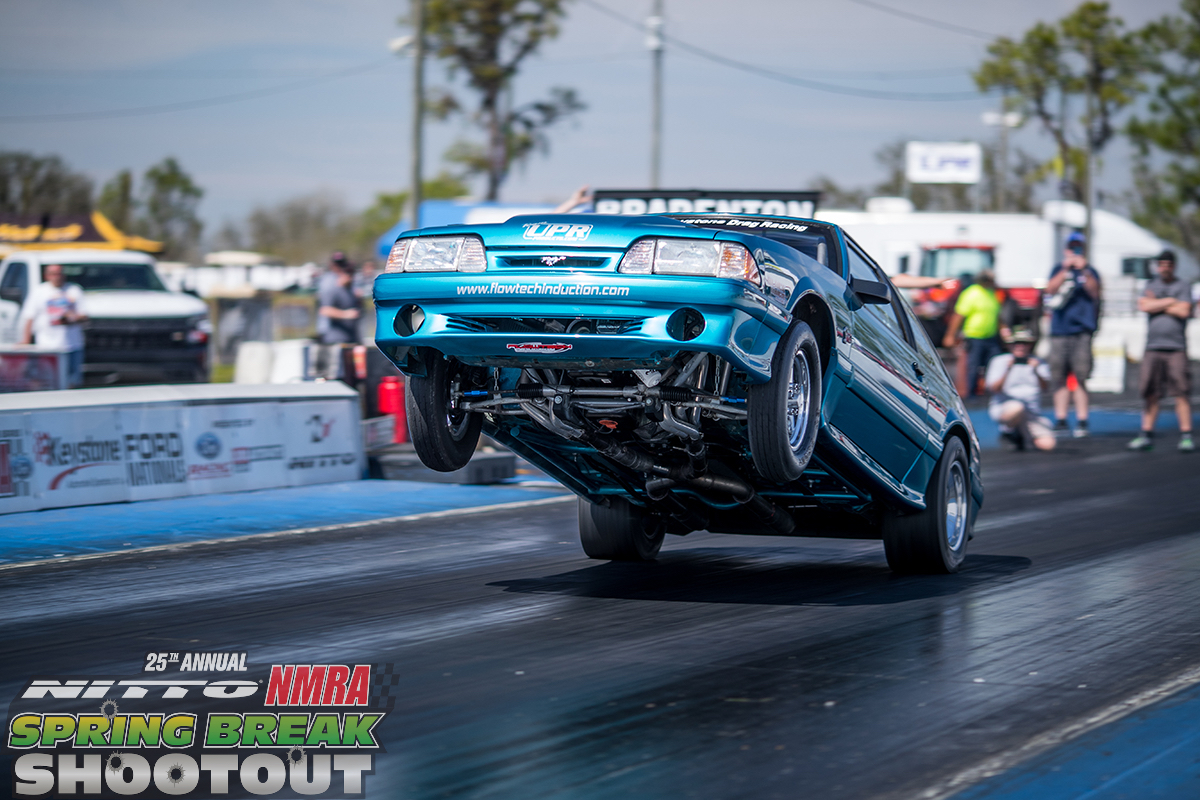 With Clair Stewart III hot on his heels, Darin Hendricks held onto his edge to take the top qualified spot in G-Force Racing Transmissions Coyote Stock. Running basically the same setup as last year, Hendricks showed us that his 1993 Mustang Cobra is still a force to be reckoned with in the sealed-engine class with his 10.17 at 131.17 hit. 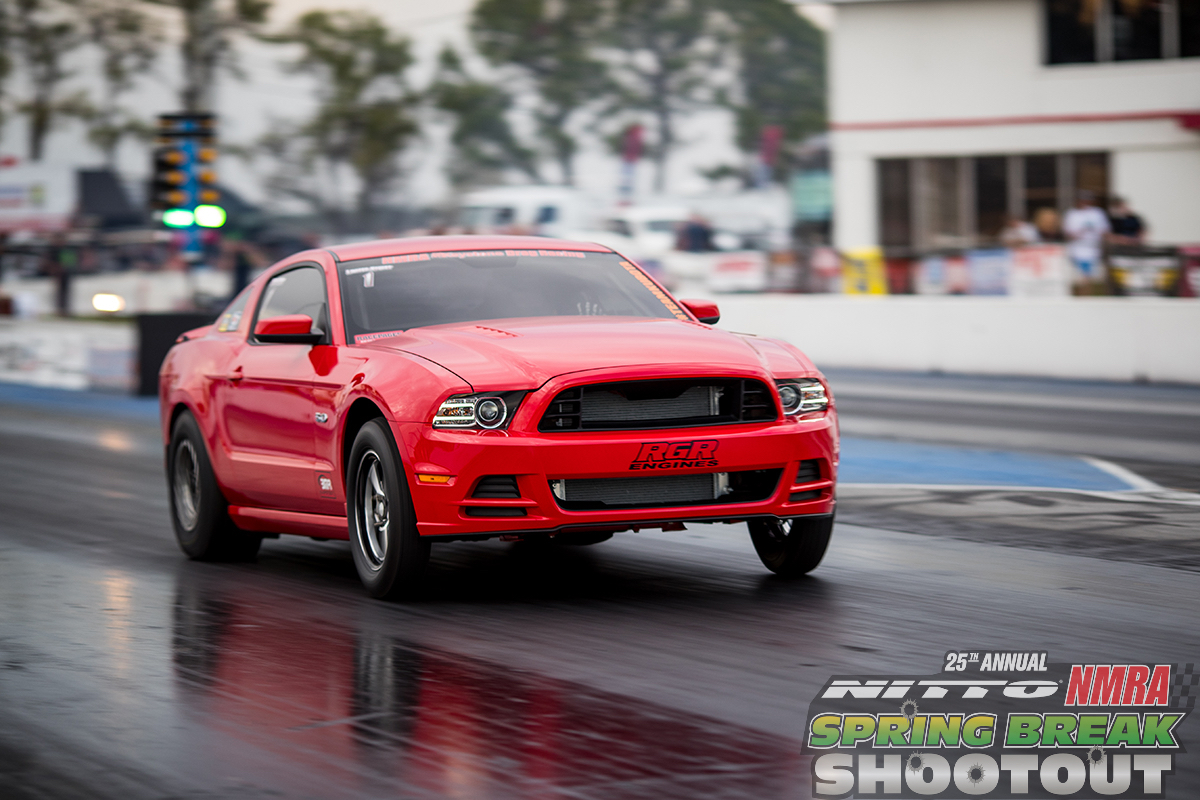 In Limited Street, Michael Ciborowski ascended to the top qualified spot in the third round of qualifying, narrowly edging Sondra Leslie. His 2014 Mustang posted an impressive 8.88 at 153.16 mph setting the stage for a competitive elimination round. 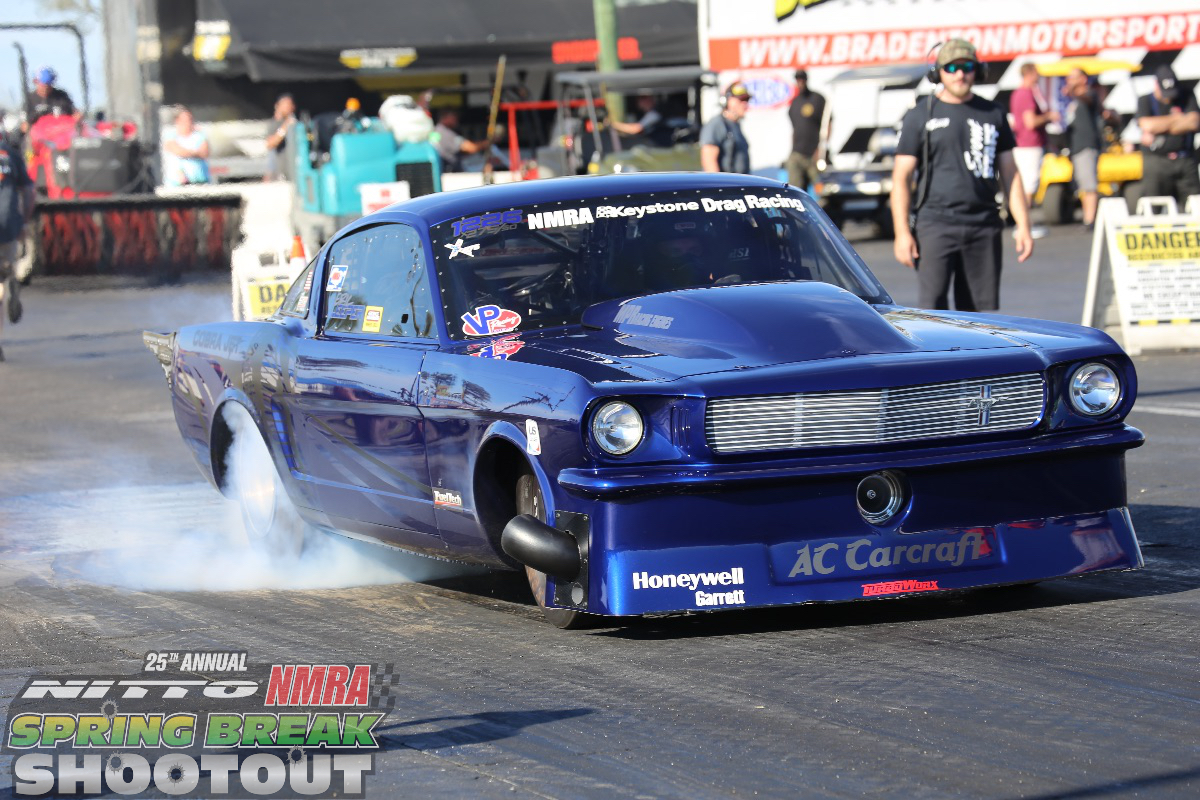 Clean enough to be a show car, Eric Leepers 1966 Mustang runs is the top NMRA class VP Racing Fuels Street Outlaw. Before the season opener, he refreshed his engine for the first time in several years, stepping up to a new GT500-style 5.4-liter modular engine built by MPR Racing Engines. The new engine is backed by a fresh Proformance torque converter and revs about a 1,000 rpm higher than the old combo, which Leeper describes as ˜elevendy thousand rpm. He dialed in the combo, which benefits from the latest FuelTech software, on the FuelTech hub dyno and said it was all about power management on race day. 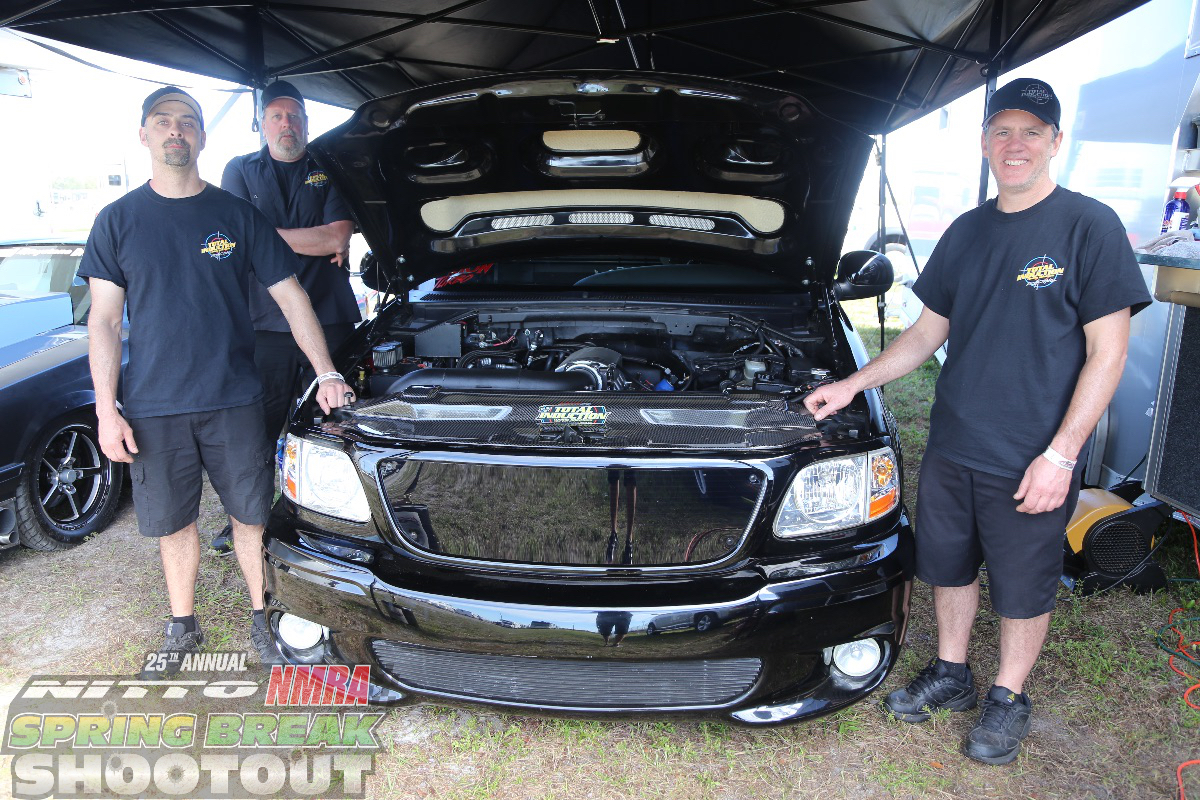 Opened up to all manner of turbocharged Ford machines this season, the Hellion Turbo Battle sported a stout class of competitors, including a pair of 7-second machines. However, clocking into the third qualified spot Paul Albino (right) proved his 2000 Lightning is a force to be reckoned with even at 4,000 pounds. He and his crew (Jim Fisher and Keith Hastings) qualified in the third spot with an 8.04 at 171 mph after making the trip all the way down to Florida from South Windsor, Connecticut. The SVT pickup is powered by a turbocharged 5.4-liter engine backed by a 4L90 automatic transmission, and in deference to its Drag Week aspirations, still sports air conditioning and a full interior. 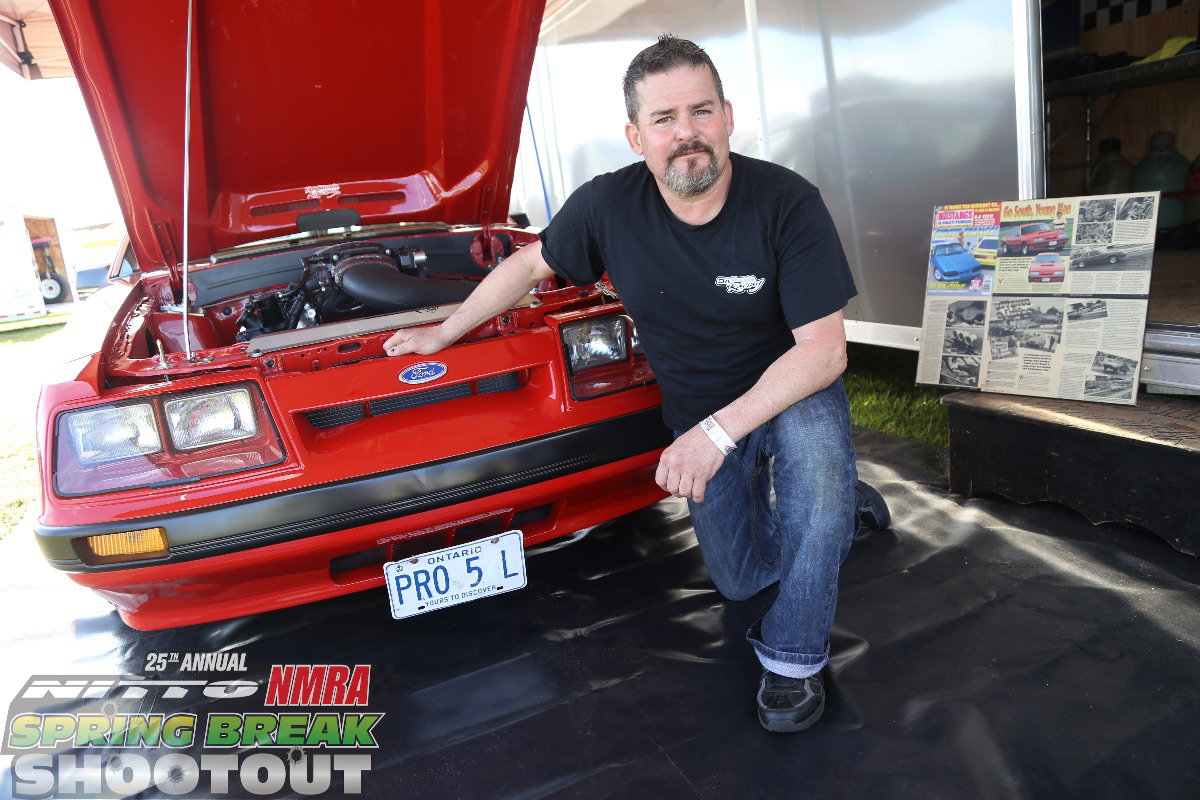 A legend in the Mustang drag racing world, Joe DaSilva brought out his four-eyed Fox, which made a name for itself back in the Pro 5.0 days. Trekking down from Canada, the DaSilva Racing proprietor was running mid-10s in the Exedy Racing Clutch Modular Muscle class. DaSilva says he loves being back behind the wheel and rowing the gears in the G-Force manual transmission. Other than its Cobra Jet intake-equipped, Kooks-exhausted Coyote 5.0 underhood, the car remains largely as it ran back in its heyday. Joe and his son are planning to make a run at G-Force Racing Transmissions Coyote Stock next season, so stay tuned. 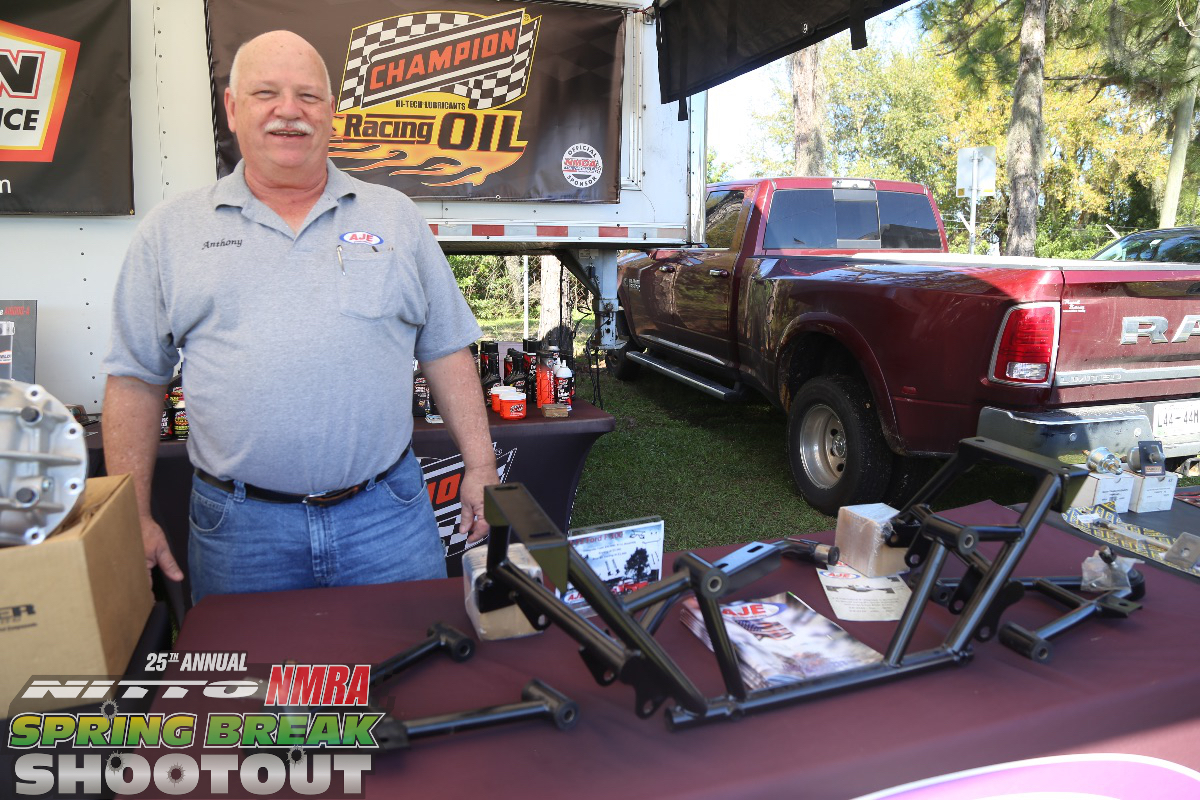 Someone else in the game for a long time is Anthony Jones of Anthony Jones Engineering, who had his wares on display along the massive manufacturers midway at the 25th Annual Nitto NMRA Spring Break Shootout. AJE is now offering a fabricated 9-inch rearend housing designed for Fox and SN-95 Mustang four-link suspension setups. 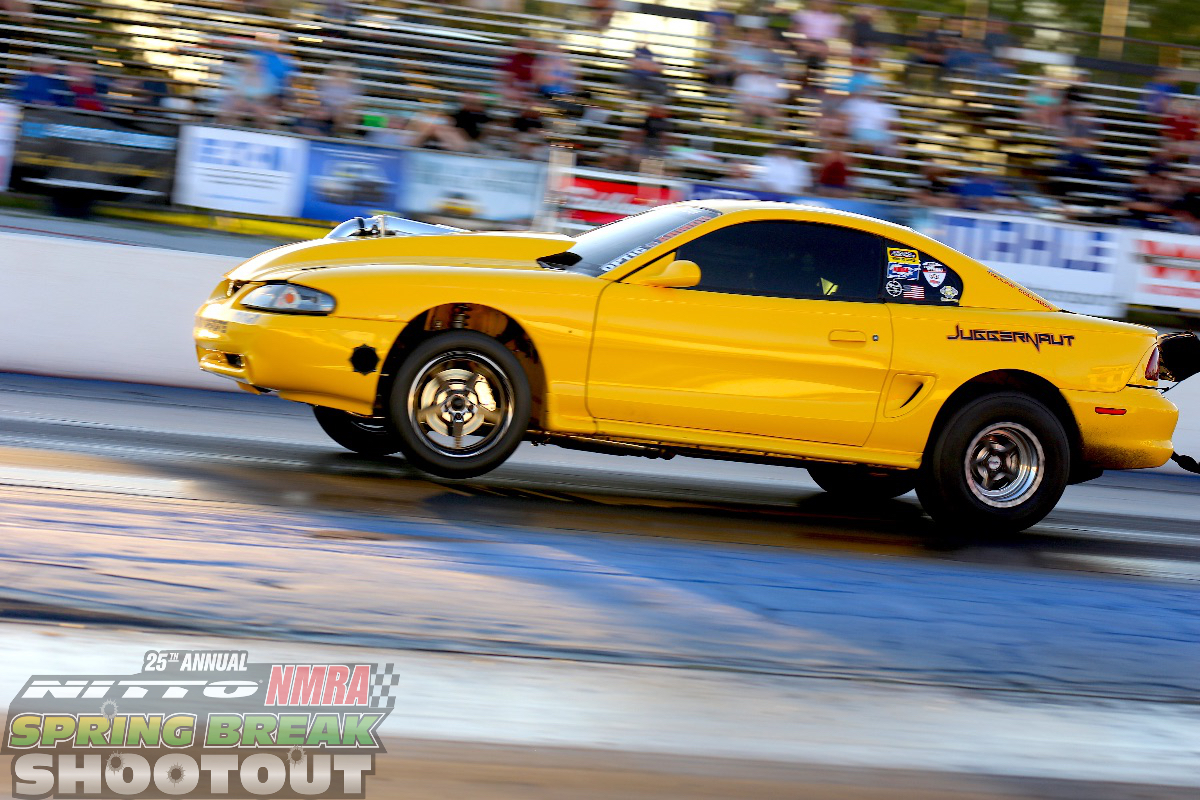 Packing four-digit power, Yandro Ulloas SN-95 is a triple threat. It runs low-8-second passes and he wants to race it as much as possible, so he wheeled it in QA1 True Street, JLT Performance Spring Break Shootout, TREMEC Stick Shift Shootout, and Mickey Thompson Cobra/Terminator vs. GT500 Shootout competition. Yeah, he is racing four classes! After a wild ride during qualifying, he backed off the power in an effort to go rounds. 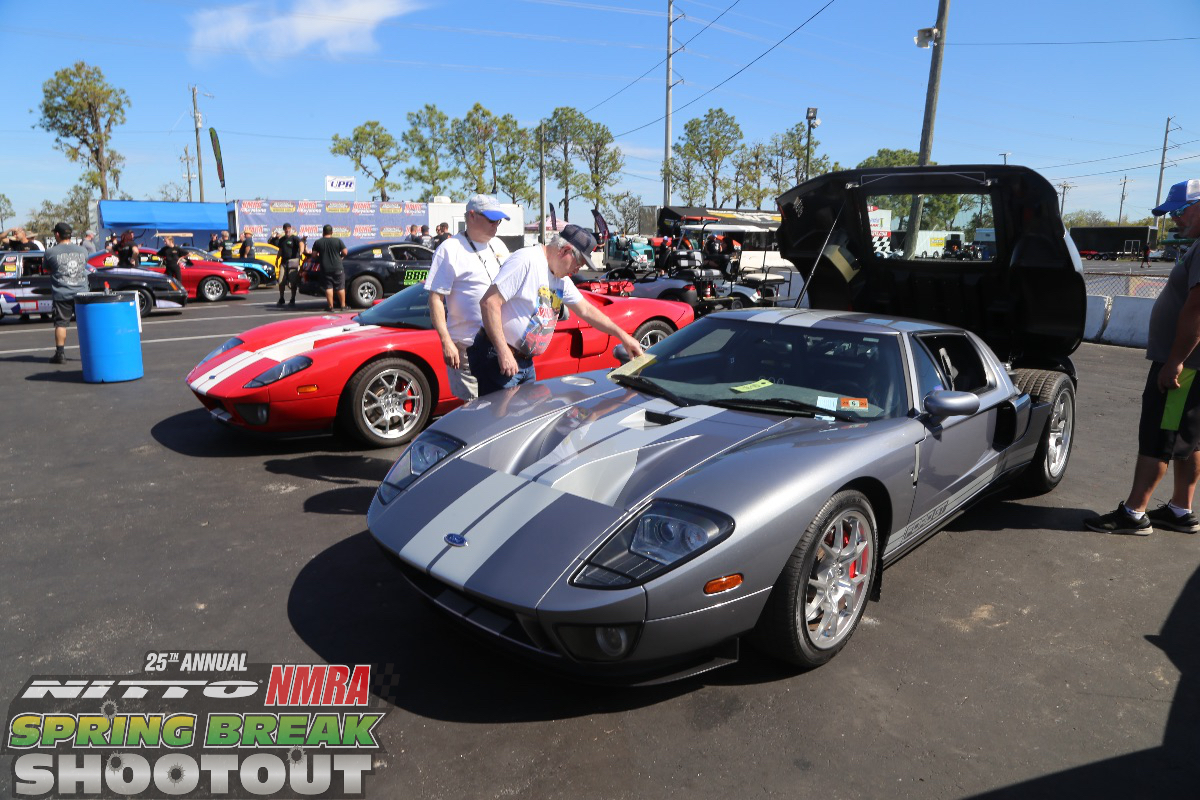 You never know what you might see at the Spring Break Shootout, and whats better than a pair of first-gen Ford GTs against the backdrop of the fastest Ford drag cars around These two 5.4-liter supercars attracted constant throngs of admirers on a beautiful Florida day.