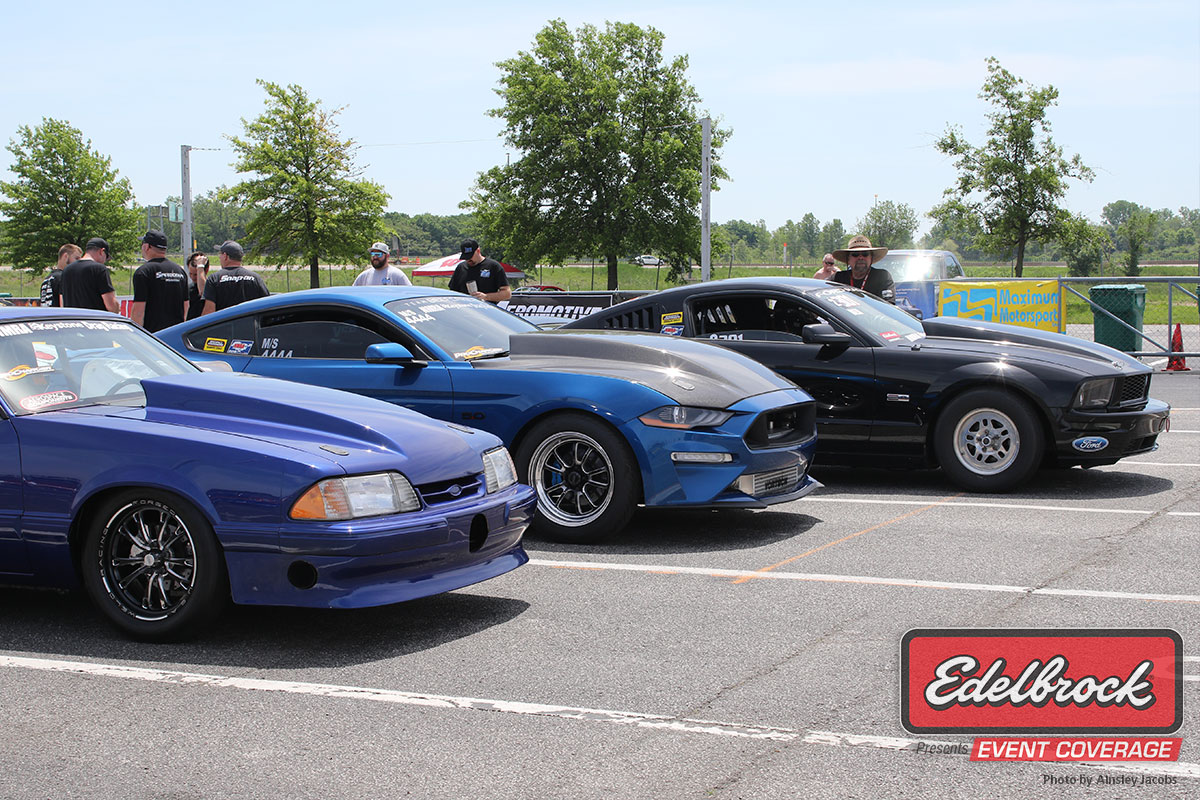 Fox body, S550, or S197 “ whatever you prefer, weve got plenty of 'Stangs in the staging lanes ready to run in todays eliminations. 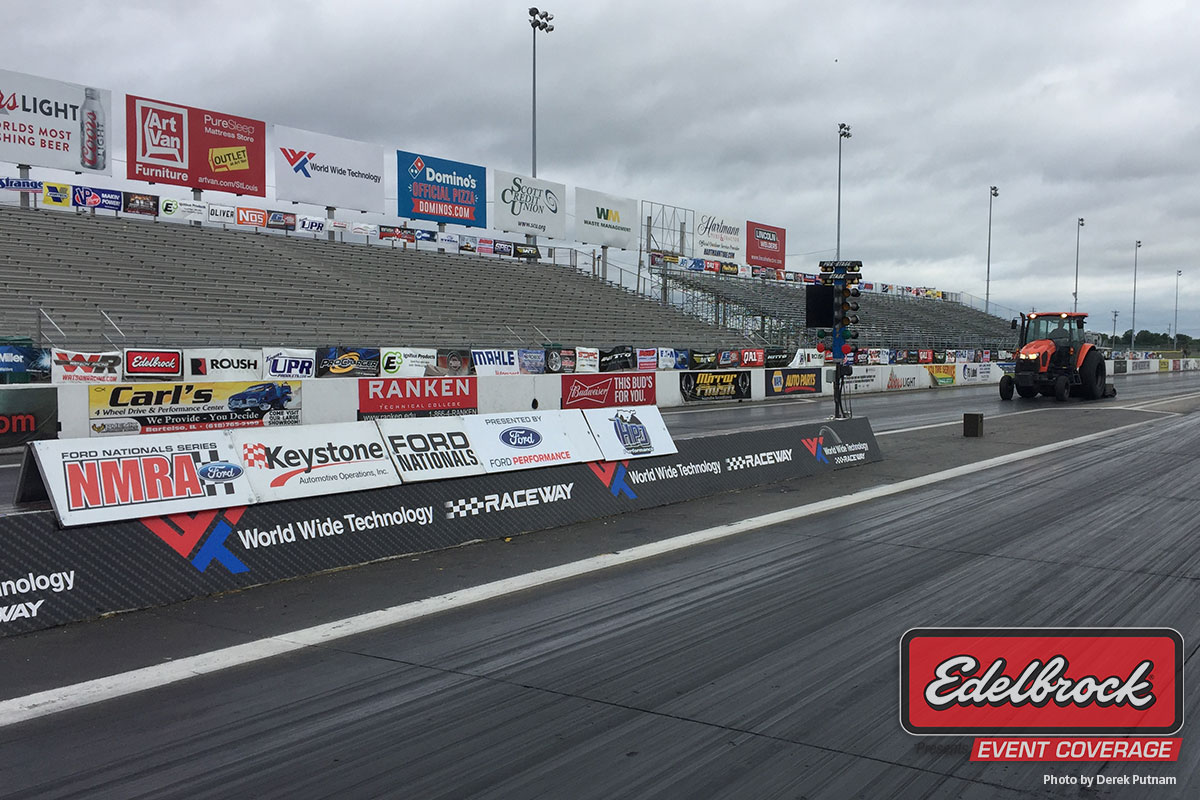 Despite a forecast that made more than a few wonder about the possibility of racing today, the rain instead fell on Saturday night. Kurt Johnson, Jake Green and our on-track team are hard at work prepping the surface now, and we should be ready for eliminations shortly. 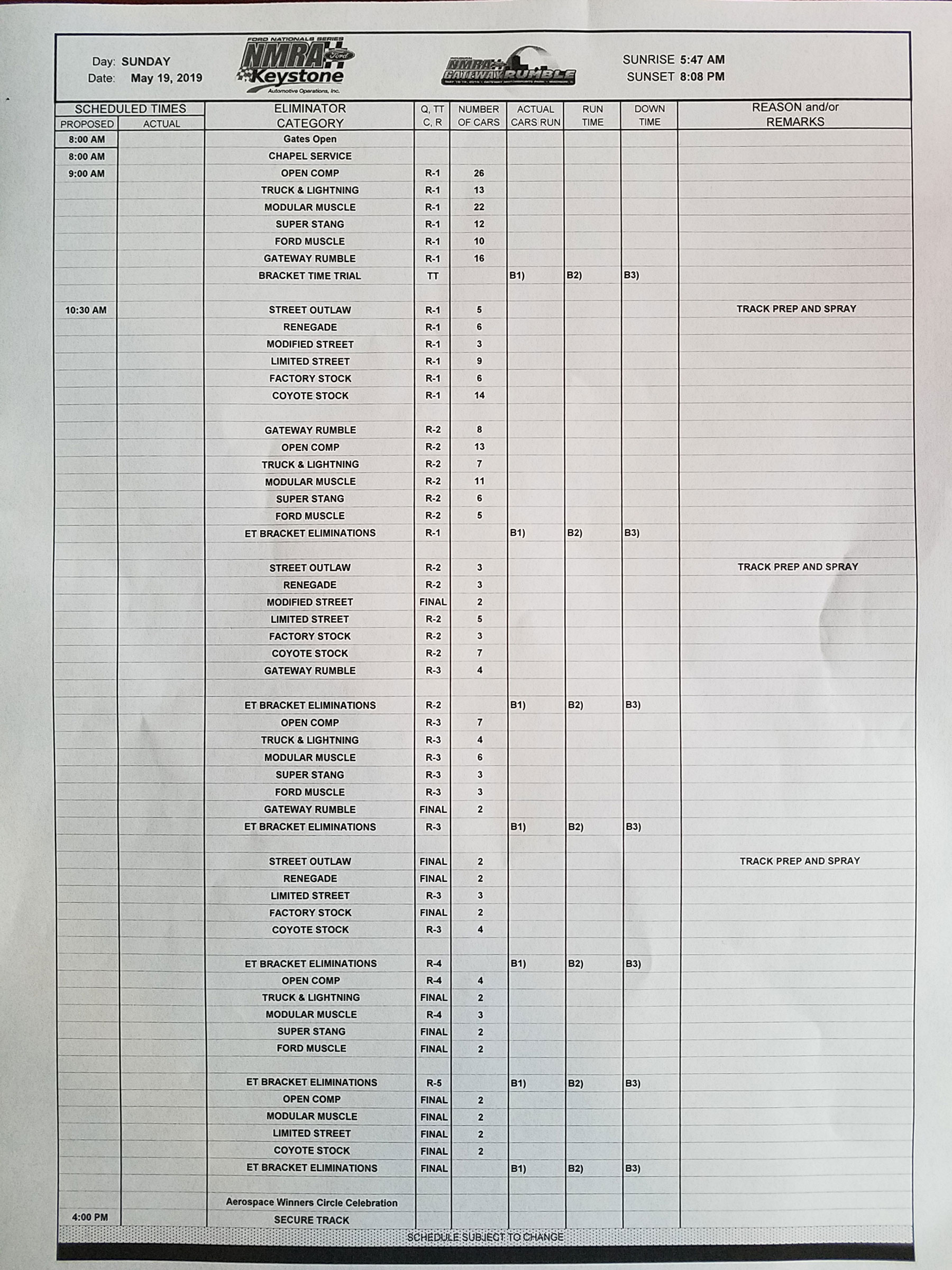 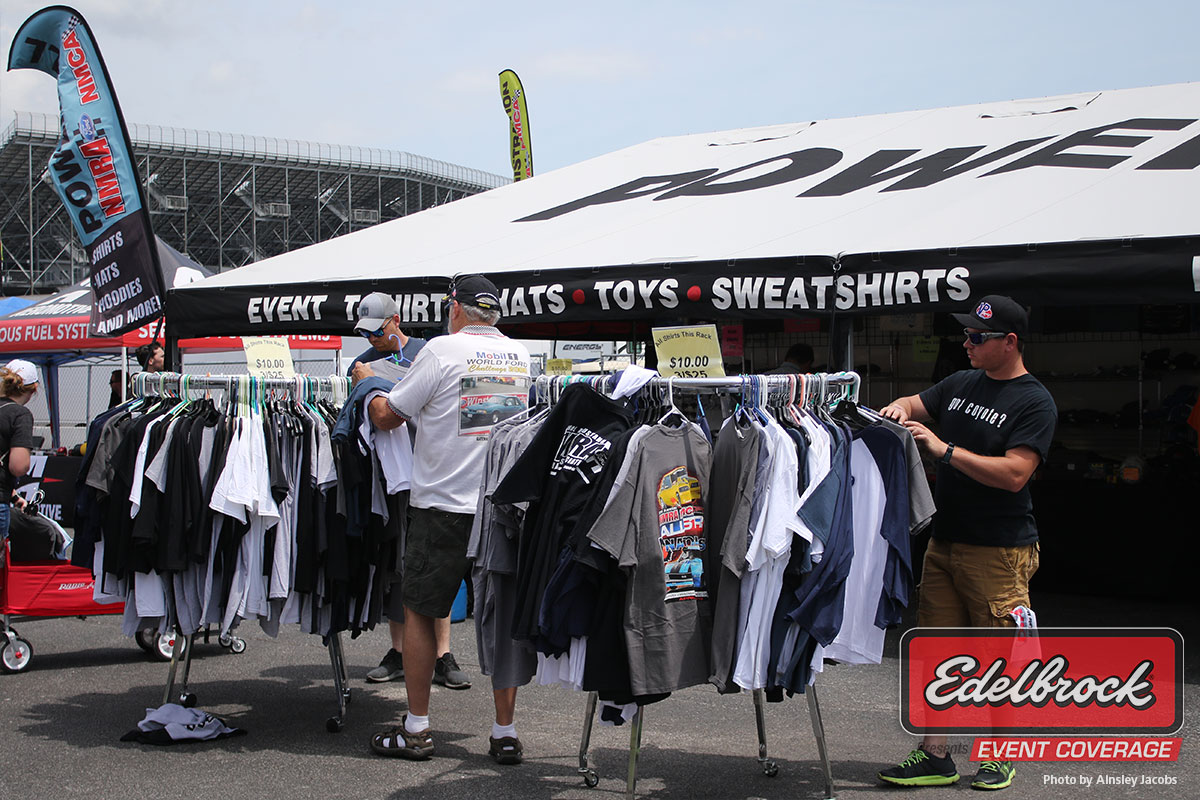 Last chance to stop by the Power Mall to score your limited edition event t-shirt and other awesome NMRA gear! Dont miss out on the great deals and get your apparel collection up to speed. 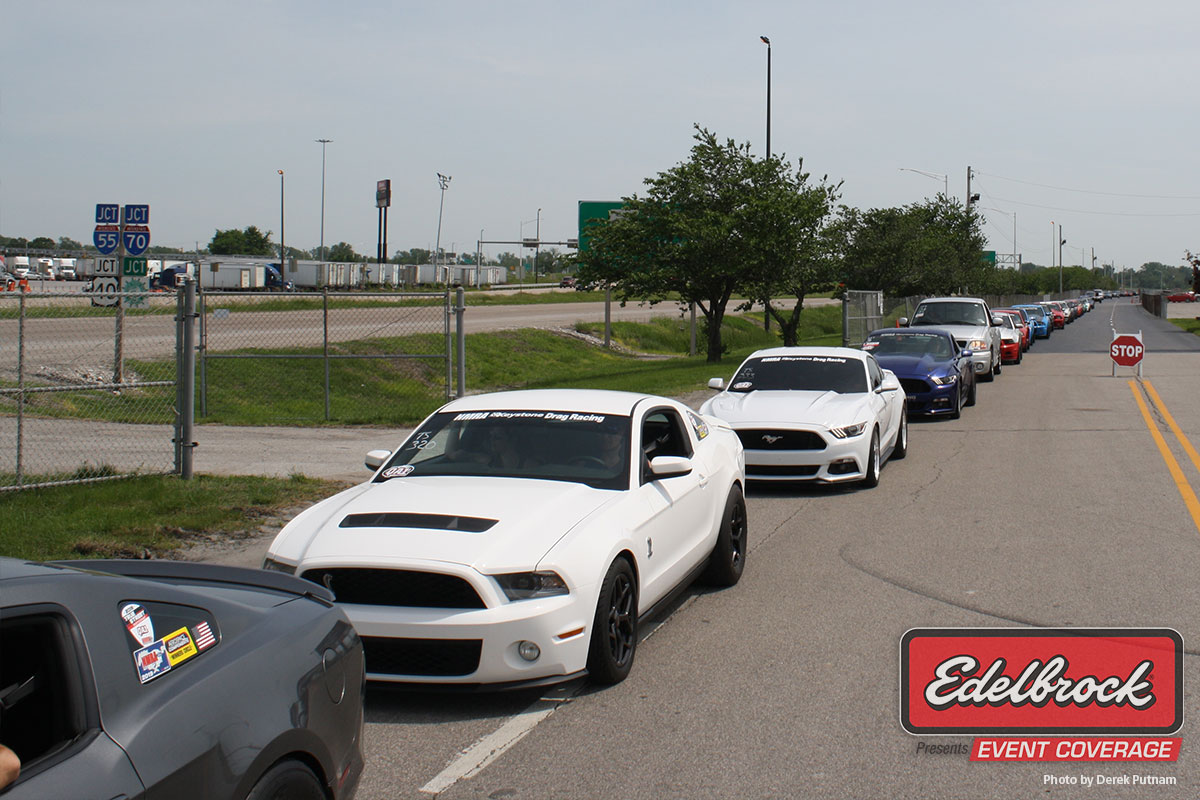 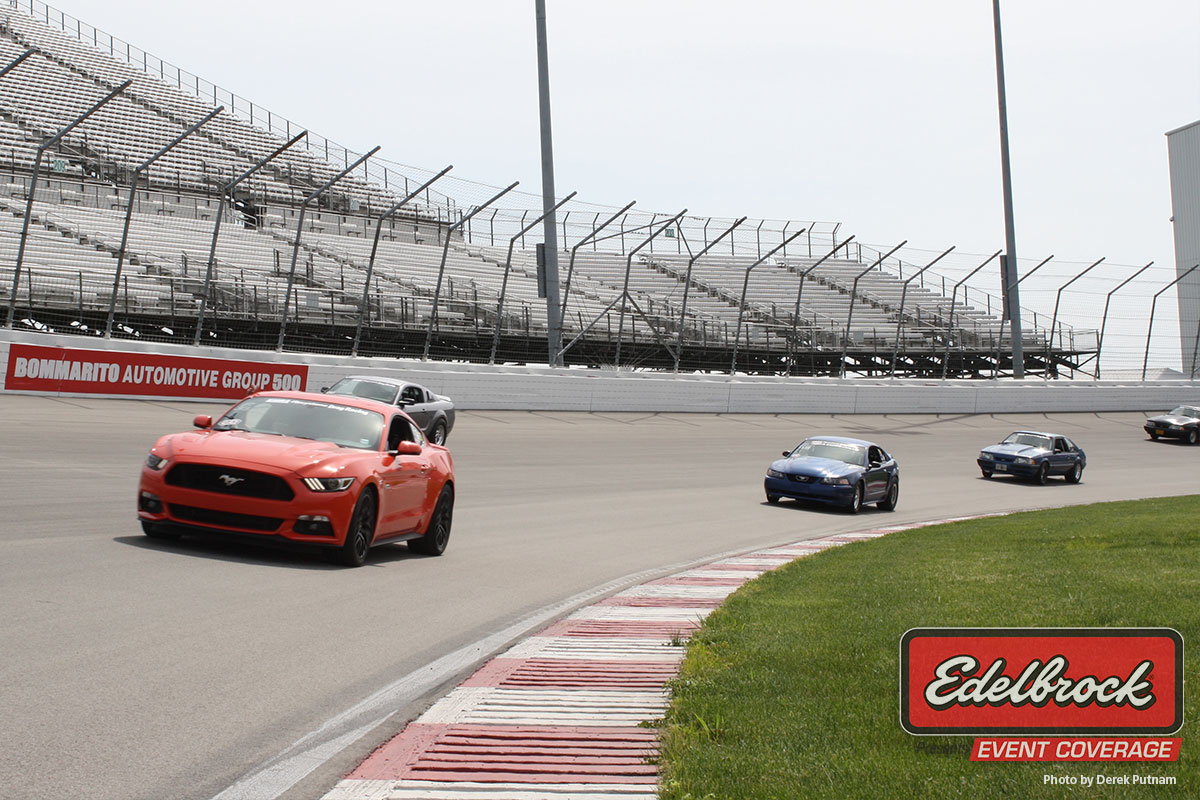 Over 50 rides entered the QA1 True Street class, and the NMRA staff put them through the paces on the street and around the World Wide Technology oval track yesterday. When all was said and done, Randy Thomas and his 2010 Shelby stood atop the field thanks to an 8.60 average, giving him the top spot in the Stifflers Chassis and Suspension Gateway Rumble class that will run today.

The first-ever Stifflers Chassis and Suspension Gateway Rumble class is shaping up this morning. The top sixteen averages from the QA1 True Street class got an invitation to compete, and the focus turns from averages in True Street to a heads-up, first-to-the-finish-line mentality. Randy Thomas is the favorite on paper today, but only the competition will decide the winner, who gets the honor to hold a special Edelbrock Victor trophy in the Aerospace Components Winners Circle this afternoon. 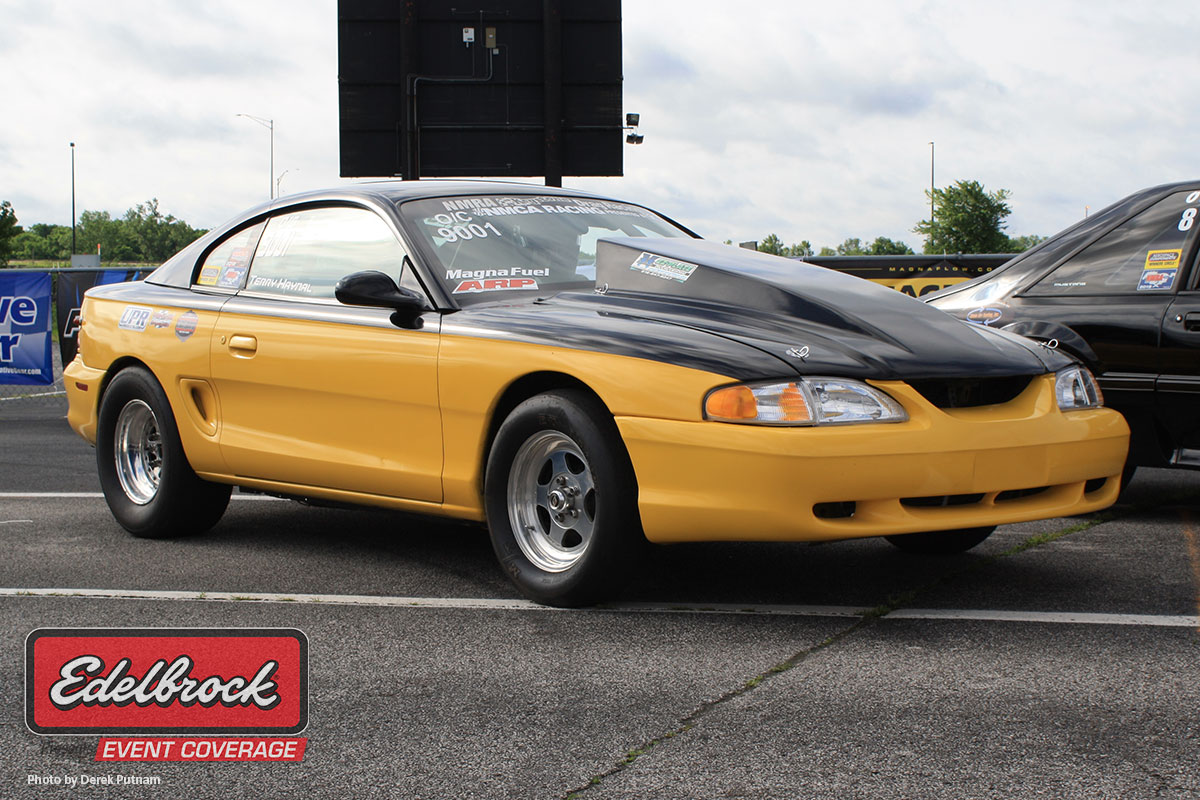 Terry Haynal nailed the elusive perfect reaction time to qualify on top of the ARP Open Comp class, and it wasnt by accident. I decided to get aggressive and go after the tree, said Haynal, who was .008 on the reaction time earlier in the weekend. So far I havent won many rounds in Open Comp this year, Haynal admitted. Maybe this will change my luck. 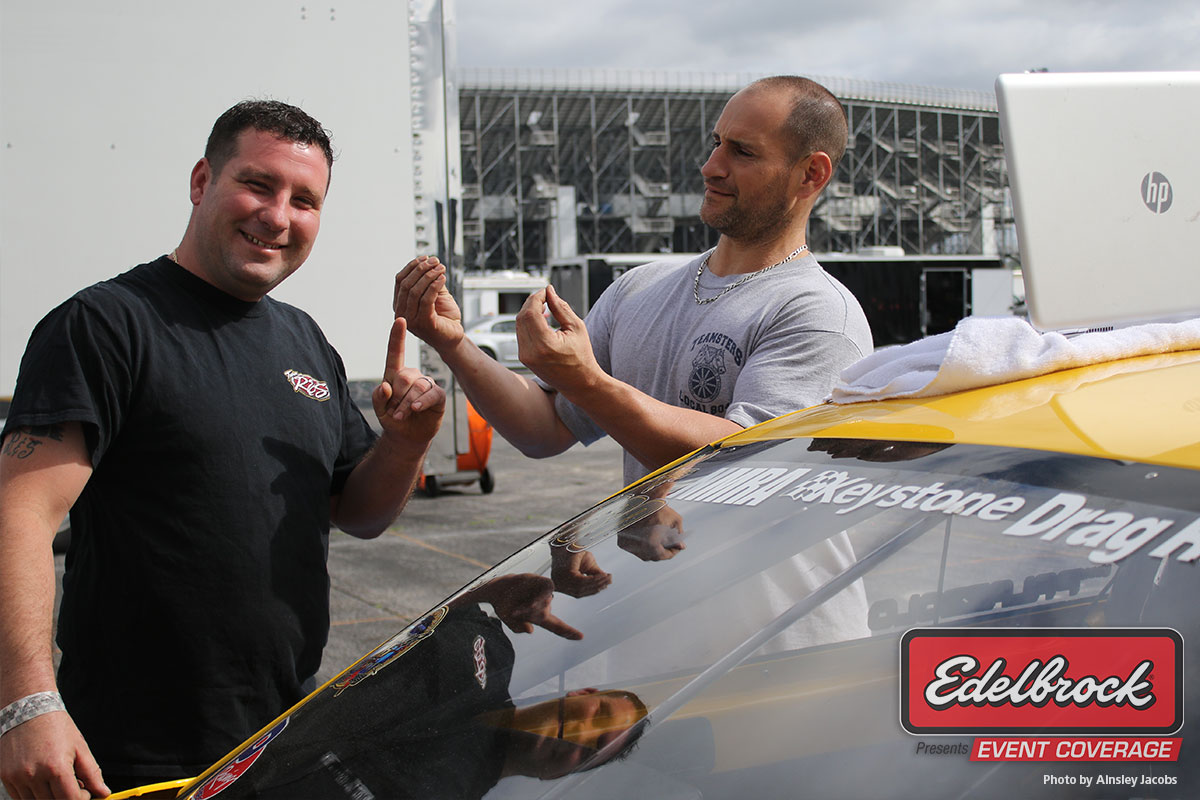 When Vinny Palazzolo says turn it up he means it! Palazzolo (left) purchased his 09 Shelby GT500 from its previous proprietor, Benny Ortiz, late last year (although Ortiz is still a part of the program) and has been busy enjoying ownership. In VP Racing Fuels Street Outlaw this weekend, Palazzolo and full-time master crew man Nicky Notch (right) struggled to get a hold of the track at first but things came around quickly for the talented two-man team and they rocketed to the lead in qualifying with a 4.440 at 166.64 mph hit. In addition to the new ownership, Palazzolo also recently switched to a Precision XPR88 turbo and Haltech Elite 2500T engine management system. 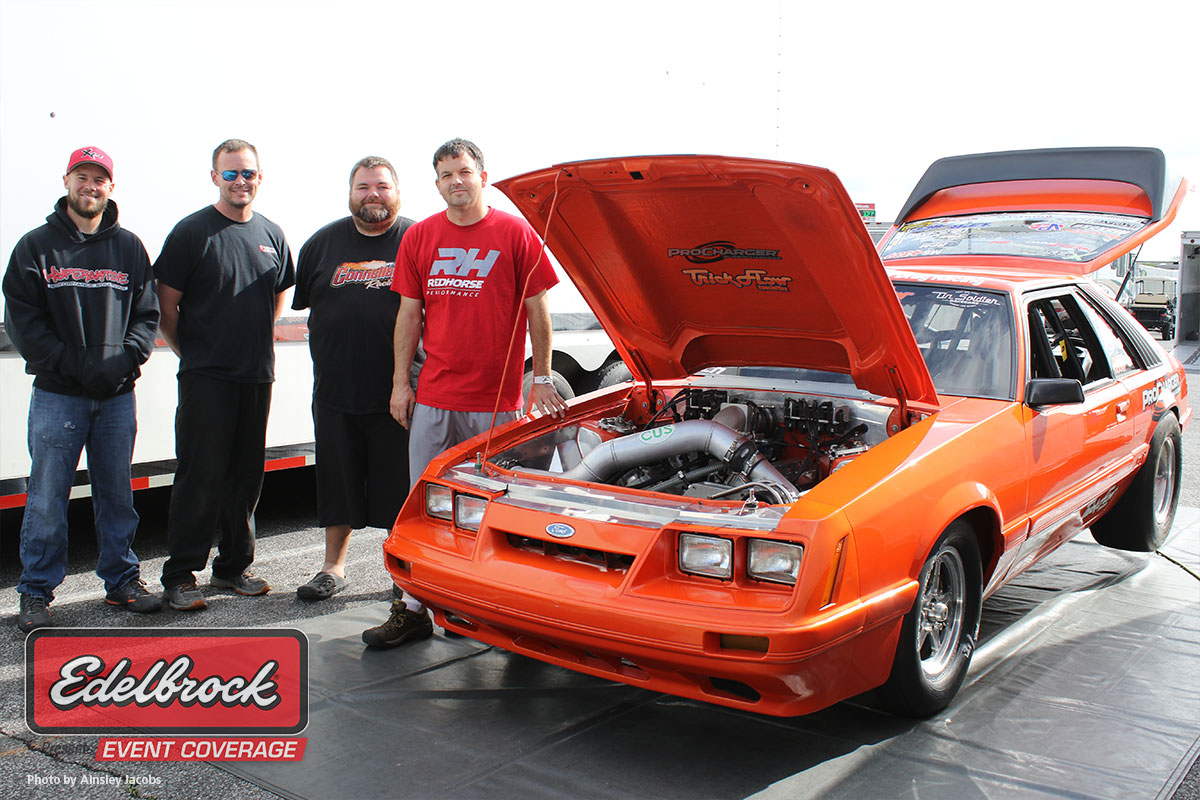 Number one qualifier Martin Connelley went 7.729 at 177.95 mph during ProCharger Modified Streets sessions yesterday and simultaneously reset both ends of the class records. Connelley (right) has got the best of the best in his corner helping make things possible, including his crew guys Eric Mitchell (left), Cory Brooks (second from left), and Dalton Winfield (second from right). His combination consists of a ProCharged 363 ci Ford engine built by BES and topped with TrickFlow heads, RPM Transmissions TH400 with ProTorque converter, Haltech EFI, Menscer Motorsports shocks, TRZ suspension components, and Hyperaktive Performance Solutions electronics. The transmission is new to the car, so the guys went testing in Indy on Friday and only arrived at World Wide Technology Raceway at Gateway on Saturday morning. Originally built to run MX235, Connelley realized that his 86 Mustang also fit the rules for Modified Street and started with the NMRA earlier this year at the Atlanta event where he finished as the runner up. 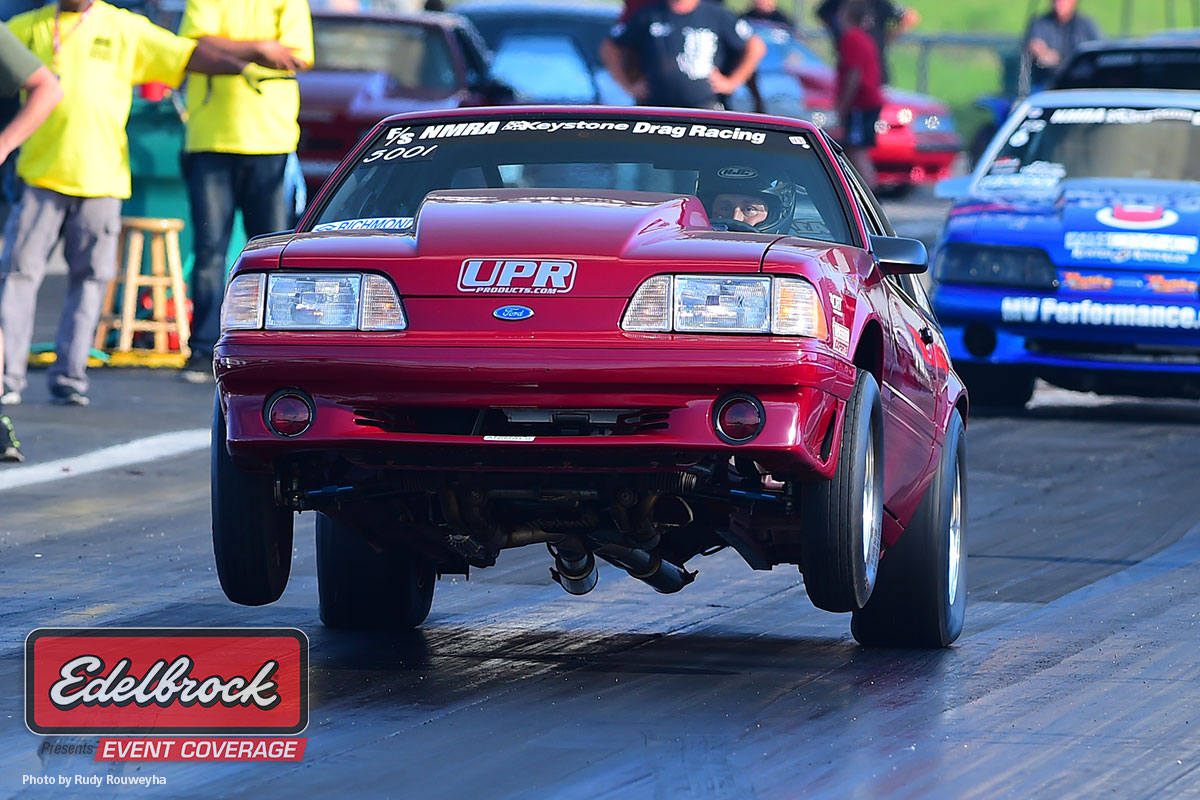 In Richmond Gear Factory Stock, Pennsylvanias own Dan Ryntz put his 89 Fox body into the number one qualifier spot with a stout 10.413 at 127.59 mph. Eliminations will be kicking off shortly and Ryntz is hoping to hang on to the lead. 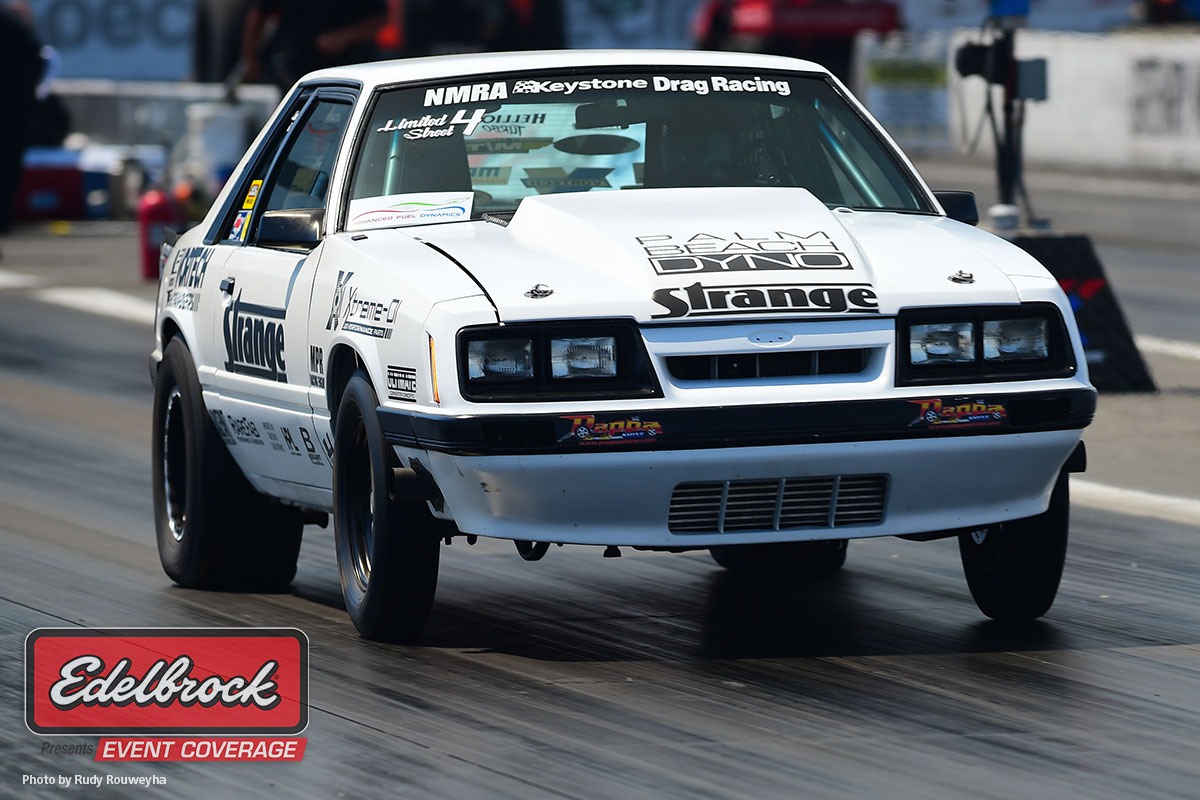 It took a monumental effort getting Sondra Leslies Advanced Fuel Dynamics Limited Street 85 Mustang ready to race this weekend, but fortunately she has Ken Bjonnes of Palm Beach Dyno in her corner. A switch over from the stock ECU to a Bosch unit leading up to the race meant an all new wire harness needed to be fabricated, and that brought its own set of problems. Thursday morning before the race, the team discovered the PCM was not correct, but it was already in the car “ so they had to rip it out, replace, and rewire. Bjonnes finished up work around 4am on Friday morning, took a two-hour nap, then drove 26 hours up to St. Louis and arrived at 10am on Saturday. Leslie was able to run starting with the second qualifier and went 8.873 at 156.37 mph to rank third and to also set the top speed. 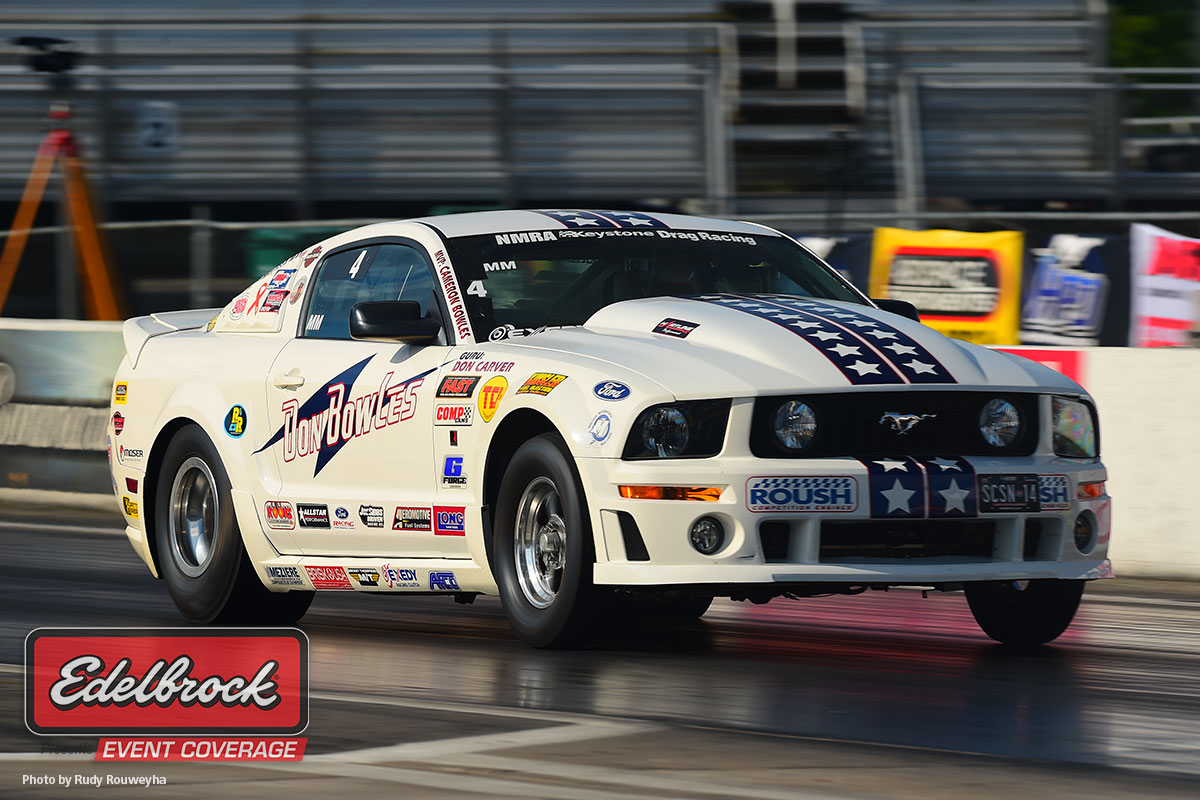 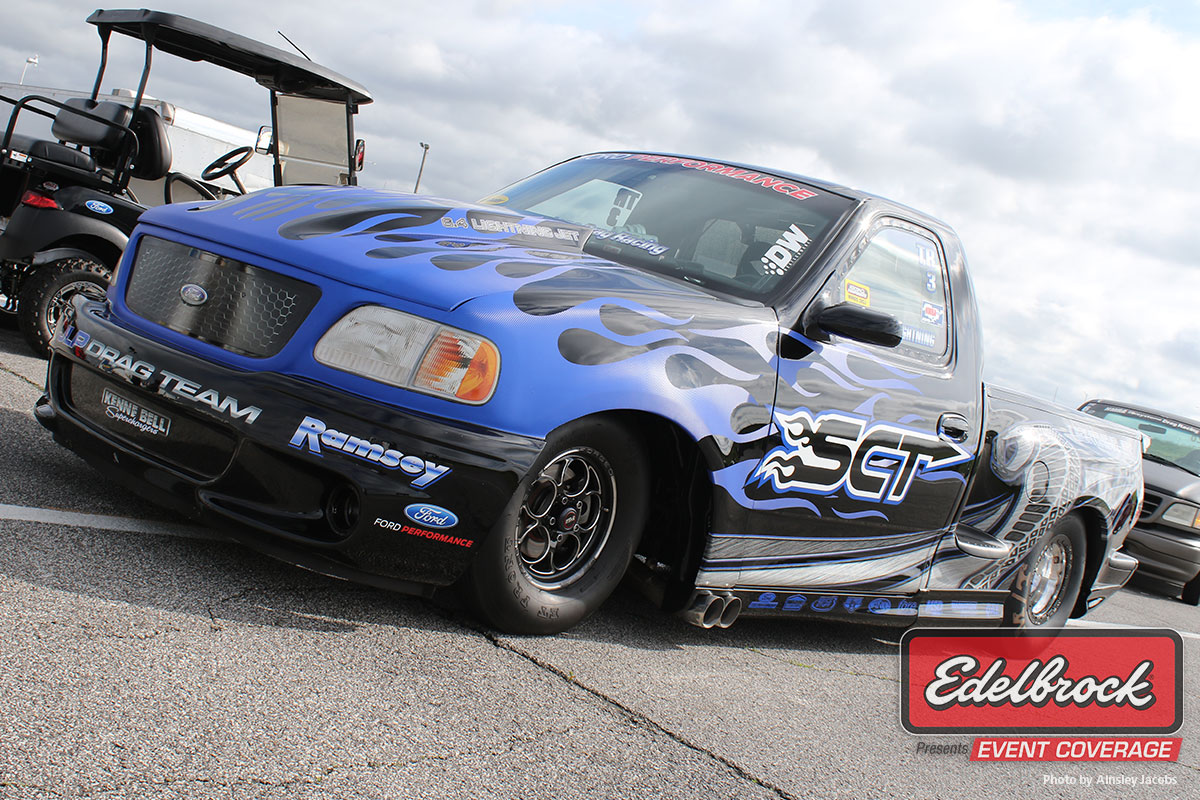 Johnny Lightning Wiker got lucky when his finger slipped off the transbrake and he cut a quick 0.012-second light in Detroit Locker Truck & Lightning to capture the number one spot in qualifying “ at least, thats what hes claiming to have happened, although we know better than to believe it was anything less than skill and precision. Wikers updated his Kenne Bell supercharged 99 Lightning this season and its got a new wrap for a new look, along with a new set of headers from American Racing Headers. 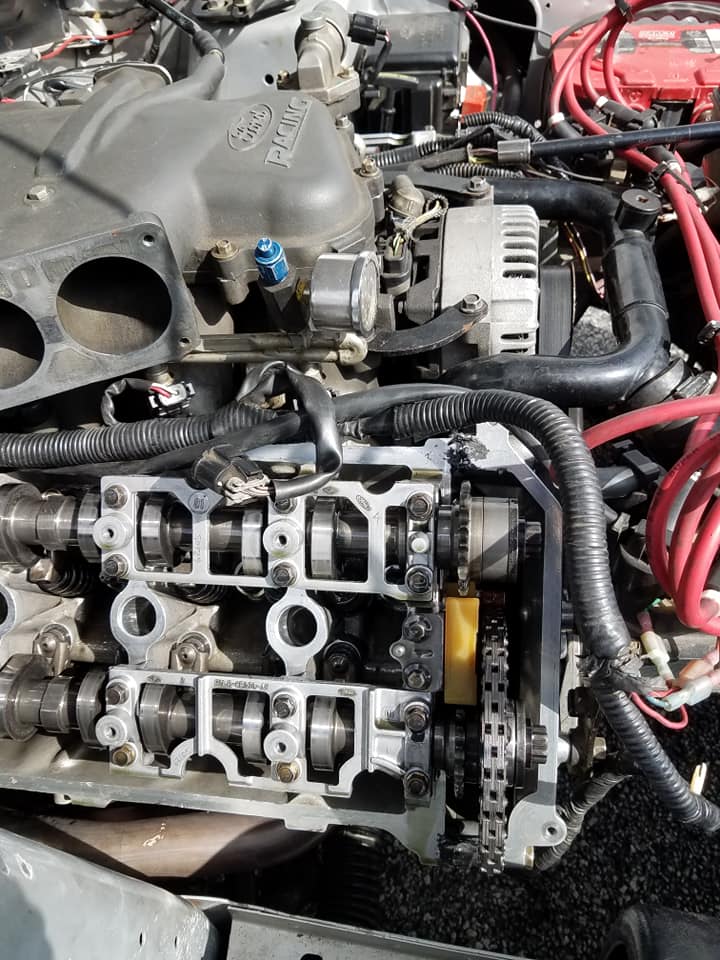 Charlie McCullochs weekend came to an early end before he even got to make an attempt at the first round of Exedy Racing Clutches Modular Muscle eliminations. Unfortunately for him, his 04 Cobras secondary timing chain broke during the burnout and bent a valve and kicked the rockers off. He wont know if theres any damage to the pistons until he arrives back in his home state of Georgia after a long, sad drive. 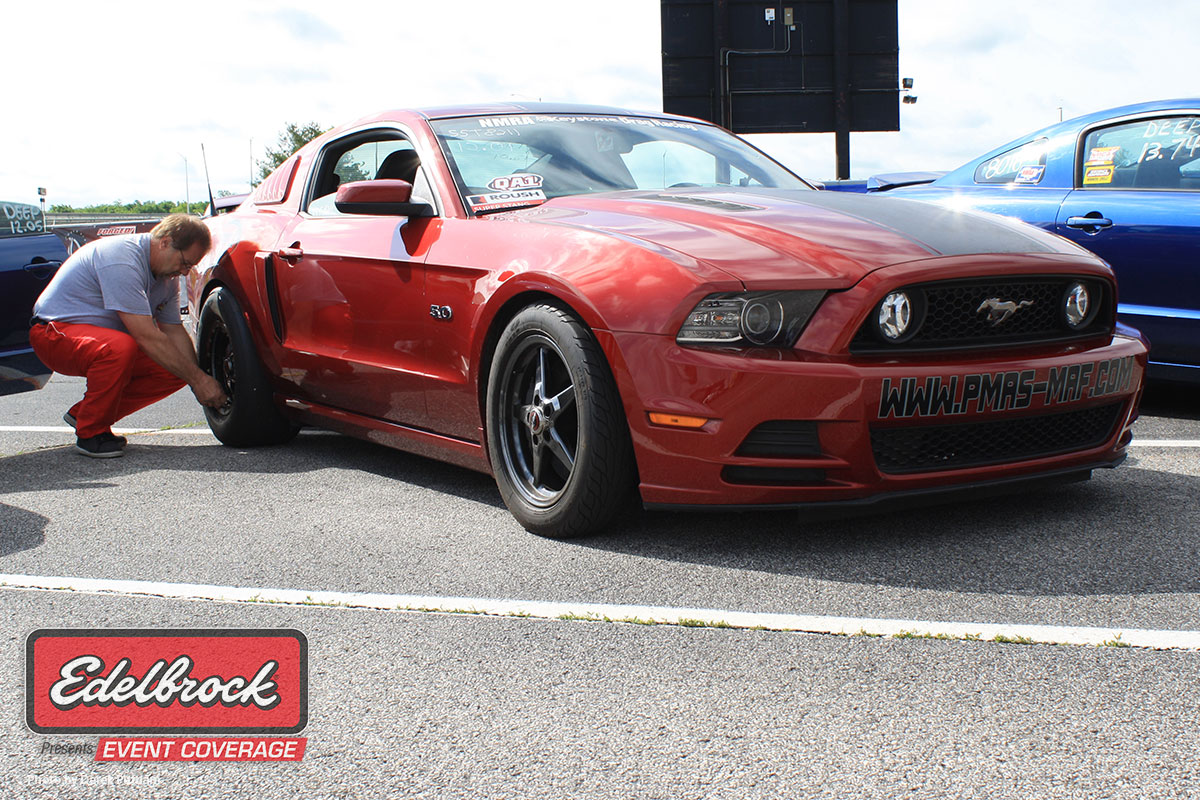 Despite being one of the few cars in ROUSH Performance Super Stang with a stick shift, Bryan Newburn nailed an .018 reaction time to qualify atop the class. The stick shift can be viewed by some as a disadvantage, but Im making it work, said Newburn. The car has a Boss intake, a Sai Li tune, upgraded exhaust and BMR suspension. Im still working on my tune-up and chassis set-up, said Newburn. But I still enjoy the stick shift, and having fun running it.

When hes not busy at his day job at National Dragster for the NHRA, Kevin McKenna prefers to be making laps in his 2014 Mustang in the Race Star Wheels Ford Muscle class. The car is a lot of fun, and I didnt want it to be a lot of work to go racing, said McKenna. For added performance, the Coyote motor got a VMP Performance supercharger installed to push the pony car into the high 10-second range at most tracks, despite no weight reduction tricks. McKenna is putting a bunch of laps on his car this weekend, competing in Ford Muscle as well as the bracket two class. 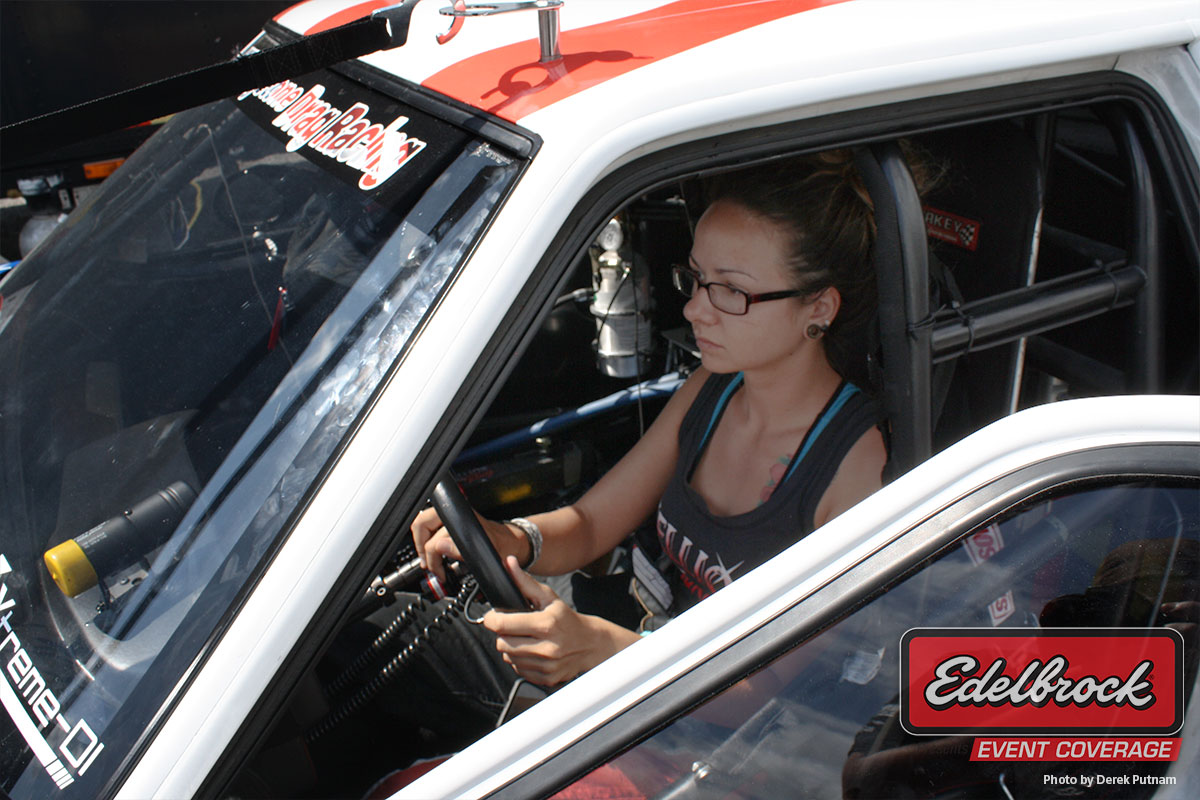 Haley James admits this weekend has presented the team some challenges with what some call tricky track conditions, but is happy to have an A to B pass that got us number one in qualifying, she said of the 4.81 pass she made in Edelbrock Renegade. This is the hottest track weve had to run on so far this year, James continued. Weve made some small changes to look for more power, but we need to race smart on this track. Thats the difference between championship racing and record-setting racing. The Hellion B-Team got a competition bye run this morning to start their march to another final round appearance, and despite a pedal job just past the 60 foot mark, she made a 4.82 pass on the single run. 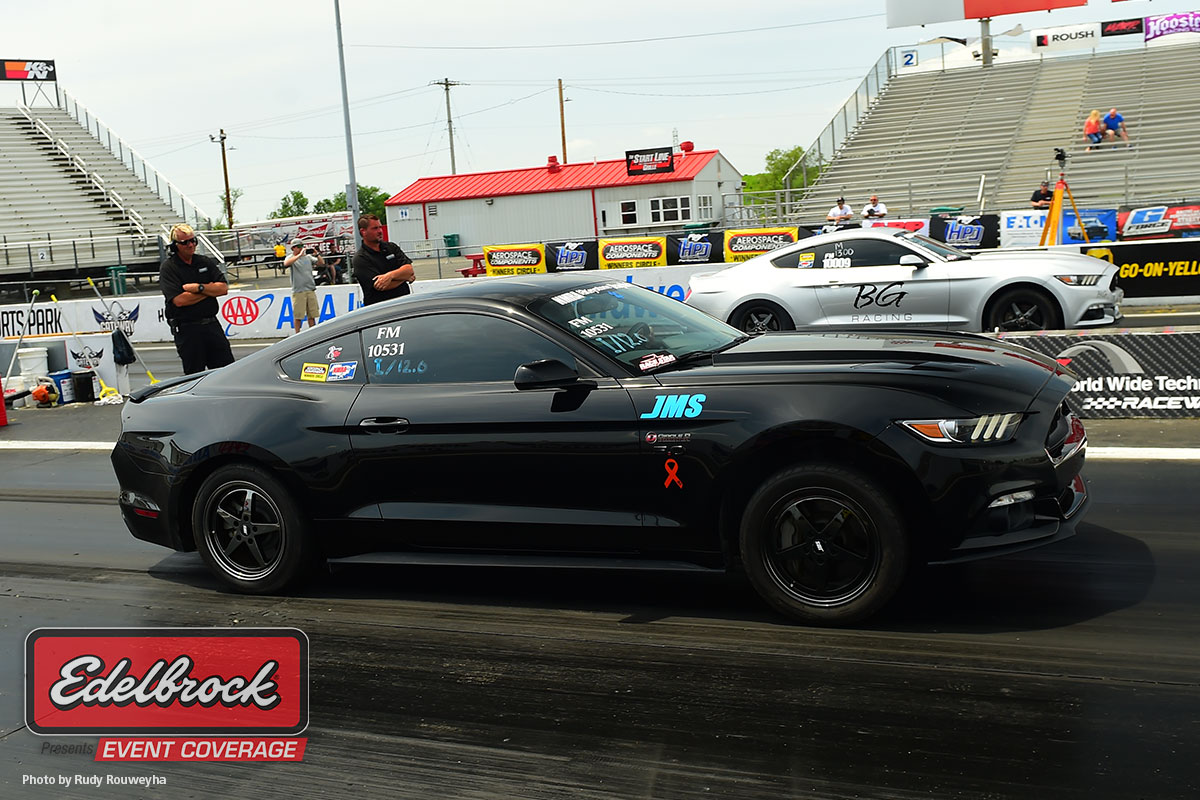 A big change in weather conditions can be hard to adapt to in a fixed index class like Race Star Wheels Ford Muscle, but Lloyd Mikeska is using little tricks hes learned to make his 2016 Mustang run closer to the desired number. The car is reactive to intake temperatures, said Mikeska. Running it a little hotter will slow it down, and with cooler temperatures today, thats a big help. The tricks worked in qualifying, as Mikeska clocked a .02-over 12.02 pass to take the top qualifying spot into eliminations today. 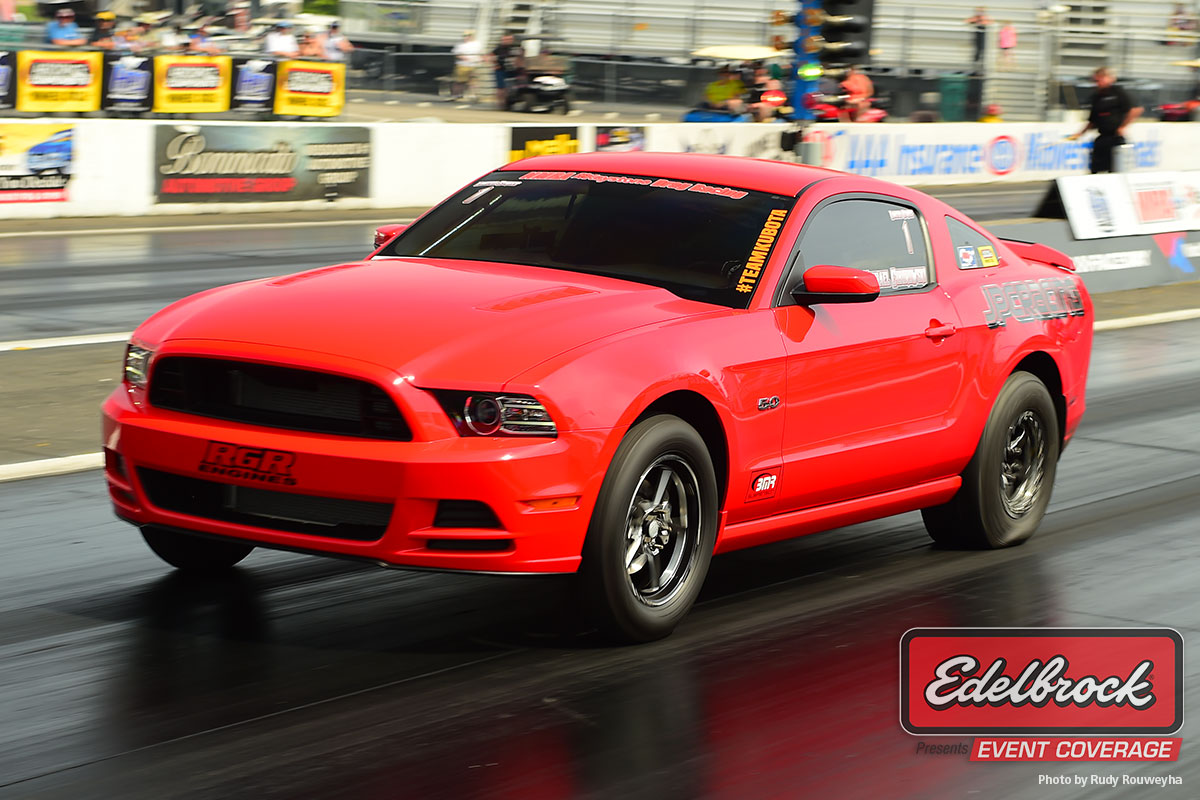 The defending class champion and points leader entering this race, Michael Ciborowski qualified number one in the Advanced Fuel Dynamics Limited Street class with an 8.74 at 155 mph. Weve been trying a few things to pick up the car a little bit, said Ciborowski, noting it was mostly around the bolt-together torque converter from TSI and keeping the wheelies in check. We havent changed the tune-up over the weekend so far. The track has been touchy, but weve managed to overcome it. The 2014 Mustang has qualified number one at every race this season, and Ciborowski knows the additional points are crucial to repeating as class champion. So far I like our chances, he admits. Hopefully we can keep rolling along, and I can do my job as a driver. >>>CLICK HERE FOR ELIMINATION RESULTS<<<