It's the final day of the NMRA Ford Performance Nationals at Summit Motorsports Park in Norwalk, Ohio, and we are ready to wrap things up by crowning the winners in each category!

Officials have been working hard to dry the track after this morning's rain, but we're planning to go racing at approximately 10 a.m. The forecast calls for sun and high 70s, low 80s for the rest of the day. Here's the run order. 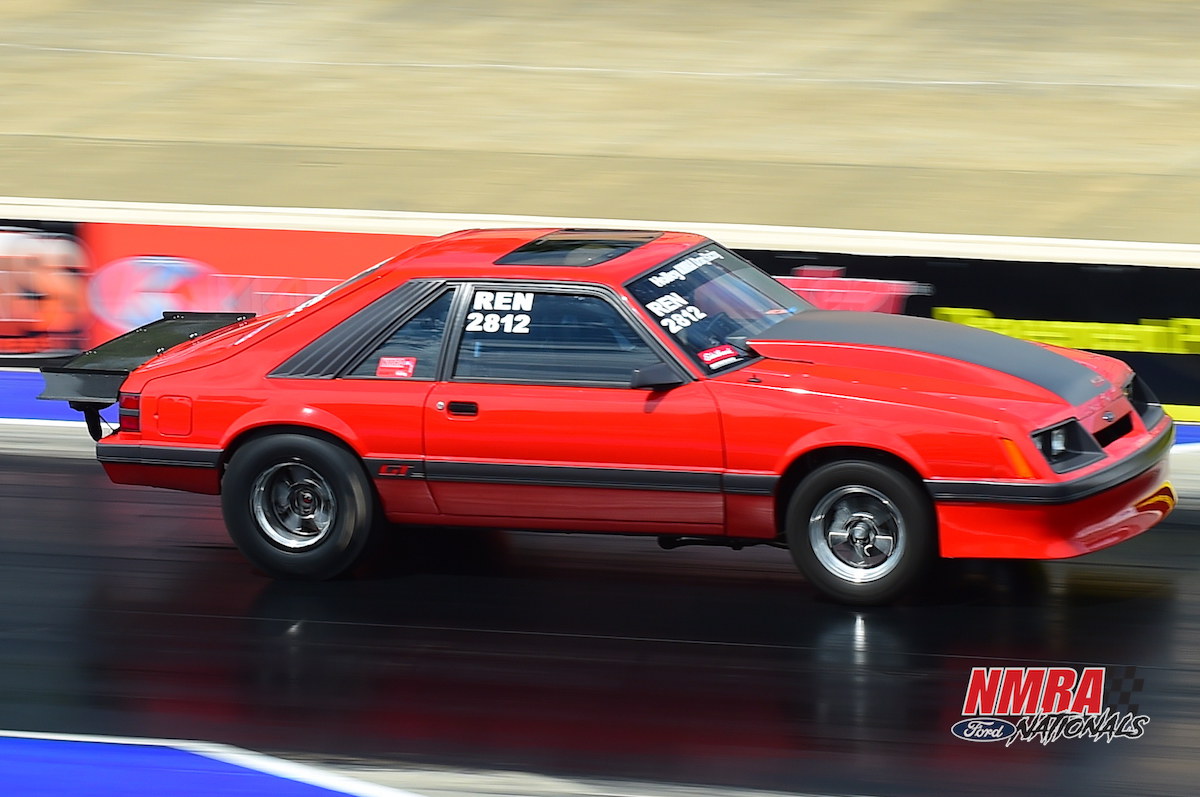 Steve Lackey made his Edelbrock Renegade debut this weekend in the remarkable red 1985 Mustang owned by his friend and crew chief, Billy Danforth, who raced it in ARP Open Comp several years ago.Â The car, which has been completely revamped since then, has a 347 cubic-inch 8.2 deck small-block Ford and an Induction Solutions nitrous system, and Lackey drove it to a 5.90 to qualify in the twelfth spot with help from Danforth and teammate Casey Fyfe. We know that the car is heavy for the class at 2900 pounds, and that we need to swap gears in the rear end because we're hitting the rev limiter, said Lackey. We also know that it will take some time to be competitive, but we'll get there."Â The team is racing in honor and in memory of Danforth's mom, who passed away a few weeks ago. It was a dream to get here to race forÂ my mom, said Danforth. When Tim Donathen of Donathen Racing (right) and Randy Soper (left) weren't sure what rear gears they would need to keep their Coyote engines happy in G-Force Racing Transmissions Coyote Stock, they came up with an innovative idea. An abundance of gears and a limited supply of center sections resulted in Donathen fabricating a work station that hung off the tongue of his trailer at the season opener, and the creation has since morphed into a trailer hitch receiver-compatible style that enables his truck's tailgate to also serve as a workbench. The creative solution makes swapping gears significantly easier, and also allows for easier one-person torquing.

This year is Matt Harget's first full season with the NMRA, and prior to the St. Louis race he contacted JDM Engineering Limited Street competitor and co-owner of Vector Motorsports, Samantha Moore, to put a tune up in his 1979 Mercury Capri. Moore was able to improve the performance of Harget's Gen 1 Coyote engine, and he went from a personal best of 10.62 to a 10.22 all in one shot with a tenth of a hundredth improvement in his 60-foot time as well. Bennett Performance manages Harget's ladder bar suspension setup, and UPR Products supplied the various components to make the Coyote swap work well. Harget starts today's Exedy Racing Clutch Modular Muscle eliminations from the #2 position thanks to a perfect 0.000-second reaction time in qualifying. 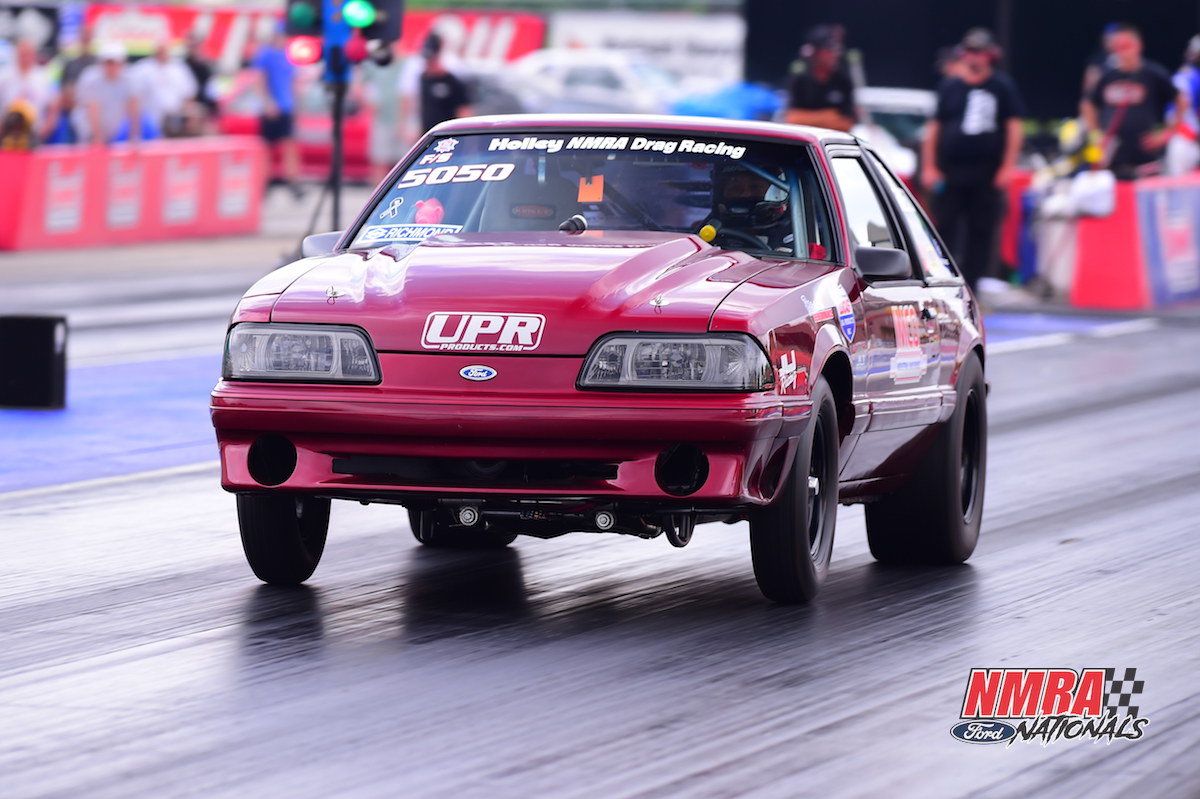 While many of his fellow Richmond Gear Factory Stock drivers rely on manual transmissions, Steve Higgins continues to rely on a C4 automatic transmission to back the Coyote engine in his Mustang. It seems to work quite well for him, as he has earned a win in the category and he finished fourth in points last year. Despite having some trouble hooking up on the hot track, he pulled off a 10.51 to qualify in the fourth spot this weekend, and while that's not a personal best elapsed-time, it is his best qualified position. Higgins was planning to make some adjustments to launch rpm and suspension before the first round of eliminations today, where he will face his teammate, John Leslie Jr.

Running in QA1 True Street, Scott Miller averaged 11.217-seconds in his Kona Blue '11 Mustang and had a quickest pass of 10.605-seconds. Miller just picked up the car recently and only finished working on it the Wednesday before the event began, putting his first hits on it on Thursday and Friday. His sleeved Coyote engine is boosted by a 75mm single turbocharger and backed by a stock MT82 transmission, which qualified him for the TREMEC Stick Shift Shootout as he was one of the quickest manually shifted cars in the class. He's planning to turn up the wick even more today and see just how quick he can get the sleeper street car to run.

Clair Stewart II has been chasing something that hasn't been a problem since 2019 and finally tracked down the source this weekend. He won't divulge the details on what or where the issue was, just that he was able to fix it by putting old parts on the car. The Gen 3 Coyote engine is coupled to a G-Force Racing transmission by way of an ACT clutch and Fidanza flywheel, with power being put out through his Mustang's 9 rear end with an Indy Gear center section. Stewart qualified fourth in G-Force Racing Transmissions Coyote Stock with a 9.987 at 133.98 mph pass and got the win in round one of eliminations to have lane choice in the next pairing. 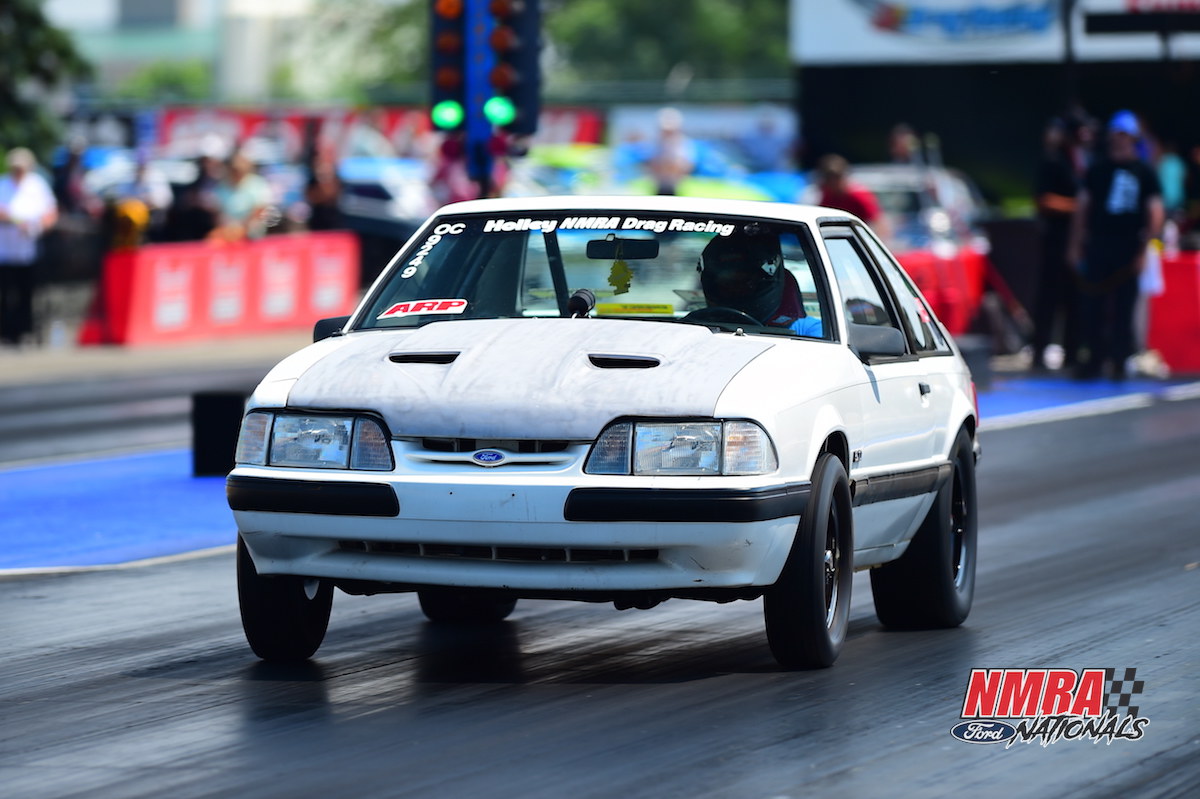 Elmer Long is behind the wheel of a 1989 Mustang rather than the 1991 Mustang that he usually drives in ARP Open Comp, and he had a bit of excitement during qualifying when he hurt the rear end under the car powered by a 347 cubic-inch stroker engine as he went through the traps. Fortunately, fellow racer Bryan Parker, as well as Long's son, Marcus Long,Â helped him replace it in short order, and Long took the win in the first round of eliminations. He turned on the -.005 red light in the second round of eliminations, but we'll see more of this 11-second car before Long debuts the 1971 Mach 1 that he's building. 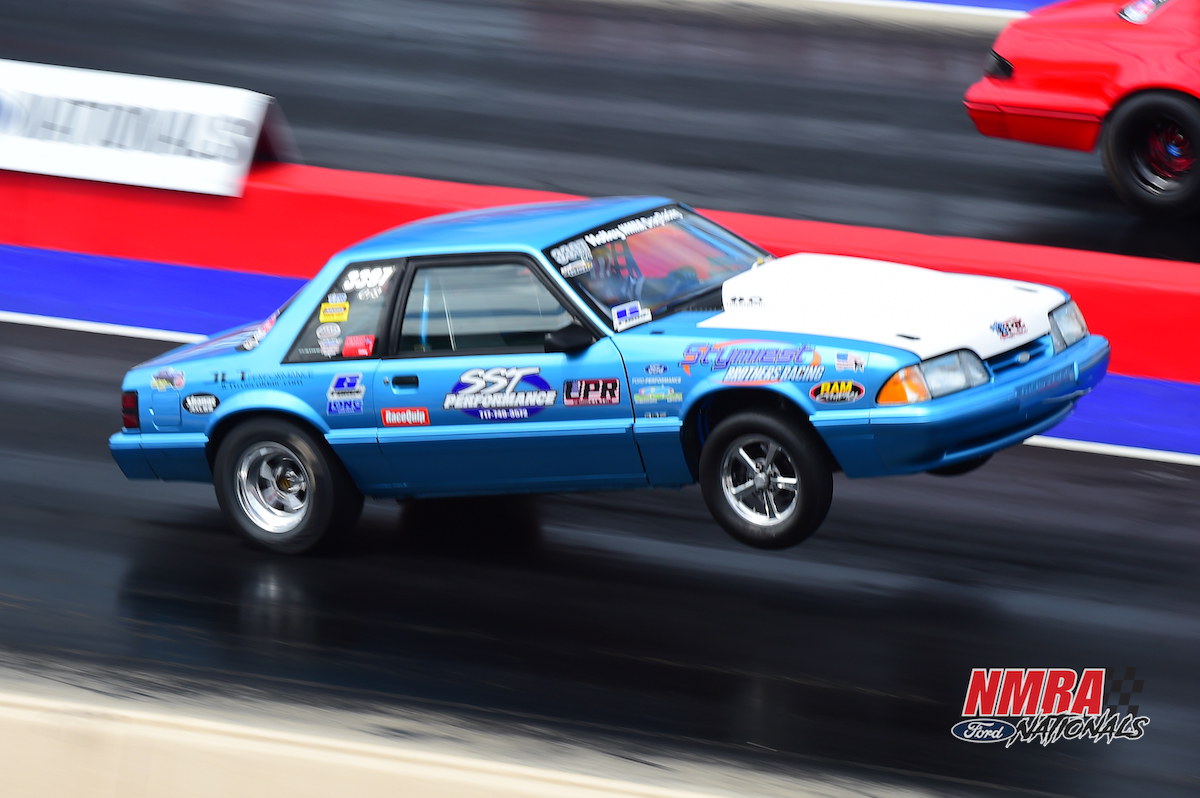 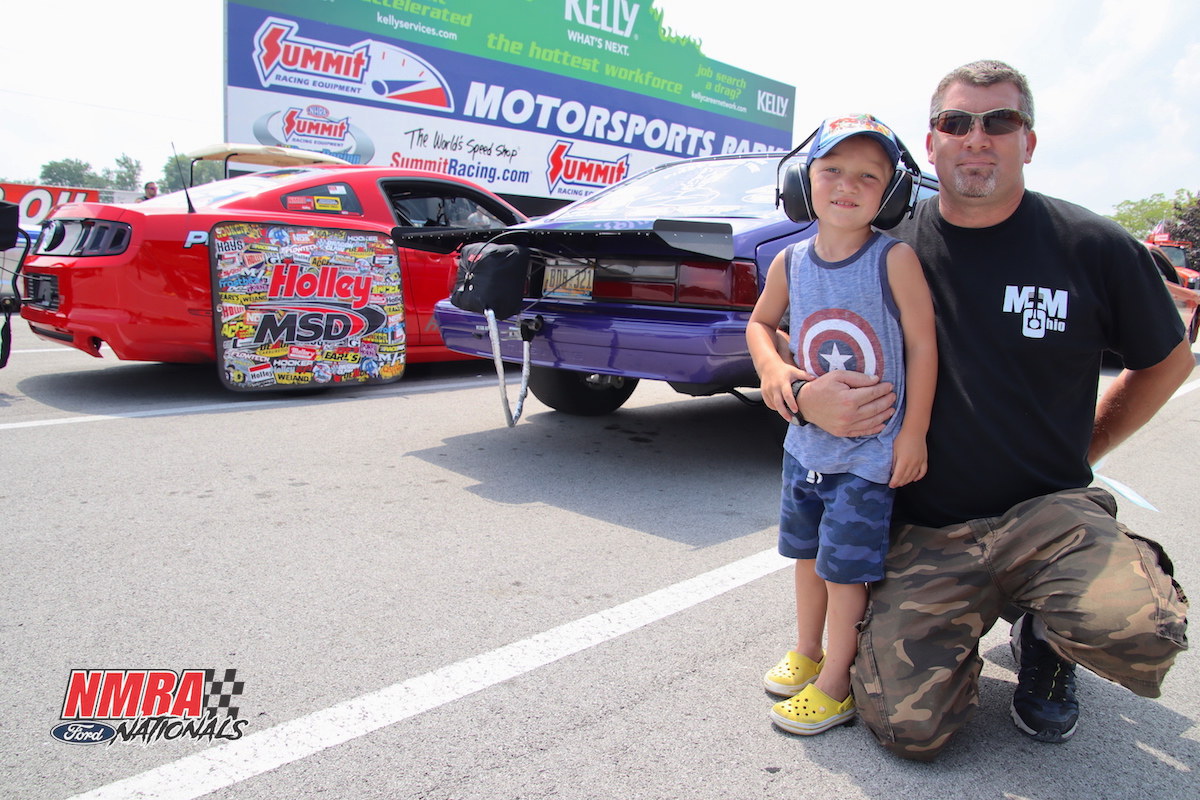 Scott Nash brought his son, Carson Nash, to theÂ NMRA Ford Performance Nationals at Summit Motorsports Park to take in all of the sights and the sounds. While Carson was wearing ear protection when he and his father were trackside, he could still hear engines revving and racing, and he was as content as could be. He even rubbed elbows with some of the series' drivers, and we get the feeling that some day, Carson might own a few Mustangs like his father does. We're thundering through eliminations at the NMRA Ford Performance Nationals todayÂ atÂ Summit Motorsports Park, and all of the action has us anticipating next year's running of the race, which is set forÂ June 10-12, 2022 here at Summit Motorsports Park. Mark your calendars and make your plans for what is already a highly anticipated event.