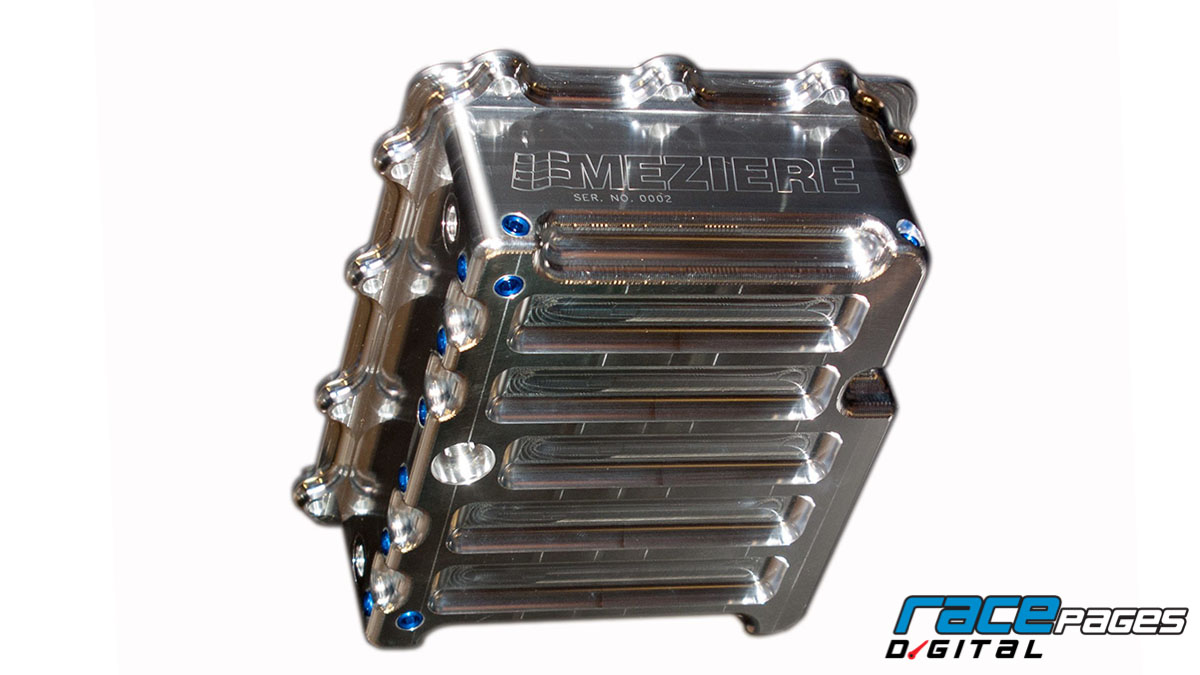 Seeing a need in the market, Meziere Enterprises developed its line of transmission pans with heat exchangers. I have often said it is just one more weapon against heat or one more ˜tool in the toolbox,' Don Meziere said. Thermal control is a battle whenever you have a performance-based vehicle. If you can stabilize the transmission fluid temperature, your overall combination will be that much better.Hot rodding and heat go hand in hand. After all, it is in the name. Making more power often means pumping out more heat. However, when your machine is in competition, that heat can reduce performance and even lead to premature part failure. As such, the aftermarket developed a number of cooling components, most of which are designed to keep engine temperature in check. Meziere Enterprises is one such company, and its Heat-Exchanger Transmission Pans are designed for just such a situation. Depending on the environment and application, other areas of the drivetrainranging from transmission to rearendalso need auxiliary cooling. On the drag strip, automatic transmissions deliver consistent performance, so long as they operate within an appropriate temperature range. 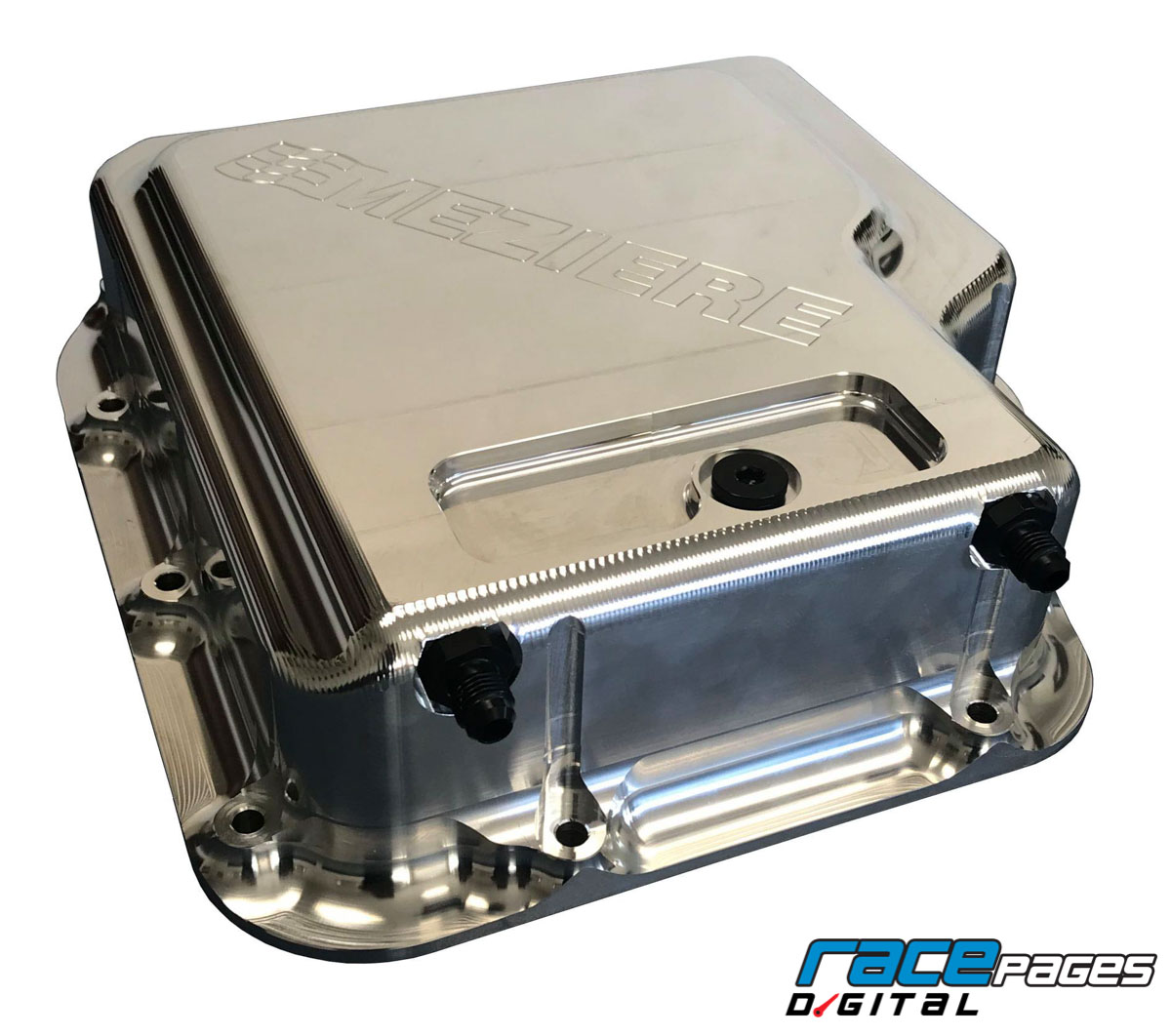 Available for both Powerglide and TH400 applications, the Meziere heat-exchanger pans are carved from billet aluminum. These deep pans utilized an O-ring seal and include a filter spacer. We have been running our own drag cars in competition for decades. We like to race a lot and take as many opportunities to ˜sneak away with the prize money' as possible. Through the ˜90s and the 2000s we found that, at many of the track events we attended, we had the chance to enter two or even three different categories with the same car, Don Meziere, Vice President of Meziere Enterprises, said. It was great for ˜seat time' and was an advantage to have so much data, often logging 15-25 passes in a single day. We could cool the engine just fine, but the darn transmission would just gain heat all the way through. That proved to be really hard on parts and caused inconsistency on the track. The brainstorming on that issue led to the idea of pulling heat out by transferring it through the pan. They say ˜necessity is the mother of invention,' and that is definitely the case when it comes to Meziere Enterprises quest to tame transmission temperatures. That's because when these temperatures run wild, bad things happen. It is huge, Meziere explained of the effect of heat on the transmission performance. From a consistency standpoint, a good racer will want to eliminate as many variables as possible. Transmission fluid temperature will affect the way a torque converter works and will also have a major influence on how long your clutches will last. Internal clearances in the valvebody and other tight-tolerance parts will also be affected by large swings in operating temperatures. 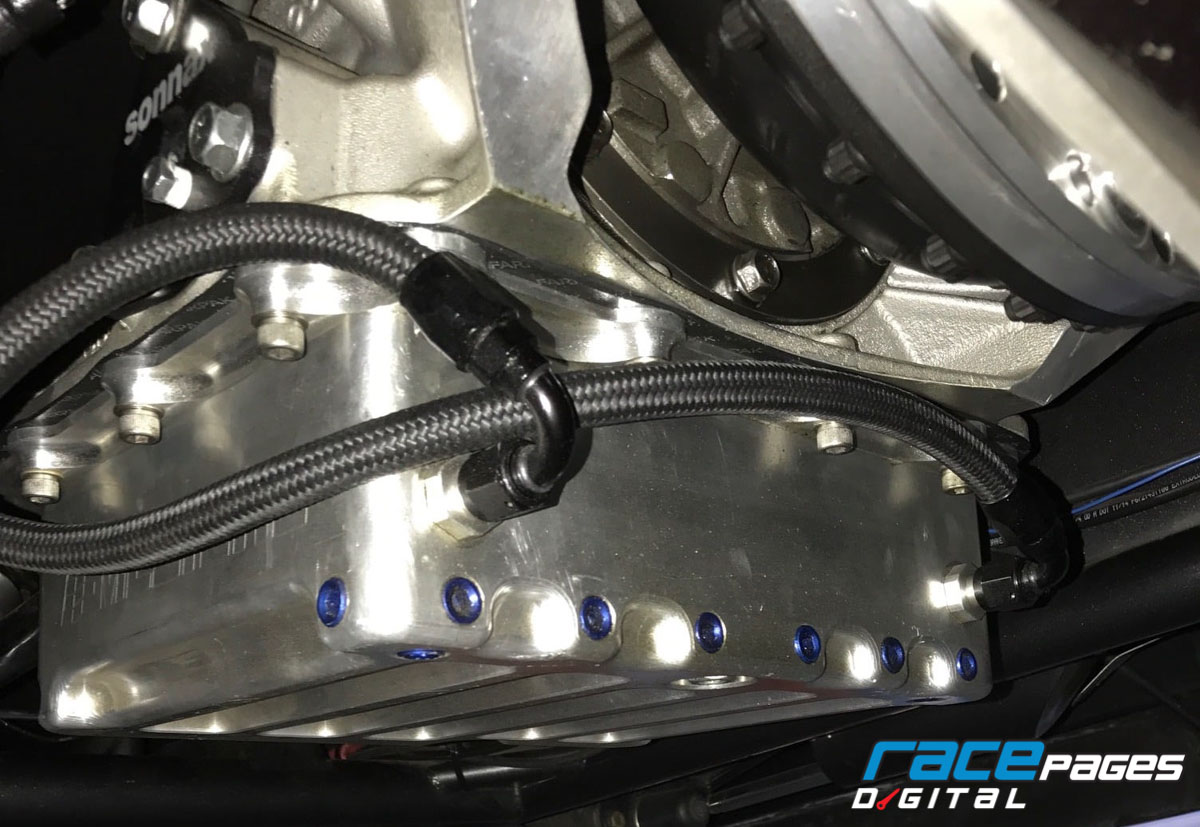 Integrated in the pan's bottom is a heat exchanger fitted with -6 feed and supply lines. It can be tapped into the vehicle's existing cooling system, which also helps warm up the trans fluid on start-up. For extreme-performance applications a standalone cooling system fed by an electric pump is recommended. While most transmission cooling solutions focus on directly cooling the fluid via external coolers, Meziere developed its transmission pan with heat exchanger for Powerglide ($844.47) automatic transmissions and followed up with a version for Turbo 400 ($1,094.50) autos. Carved from a huge block of billet aluminum, they weigh 5.2 and 7.1 pounds respectively and are both fitted with an O-ring seal to eliminate the need for a gasket. More importantly, these deep pans feature a heat-exchanger coolant path that can both carry heat away or preheat the pan to an optimal temperature before a run. With the pan tapped into the vehicle cooling system, Meziere tested the pan on a drag car and found that the pan temperature rose to within 15 degrees of the engine (150 vs. 165 degrees) temperature upon exiting the staging lanes. After the run, the engine registered 205 degrees, while the transmission elevated to 215 degrees. It quickly dropped by 5 degrees and plummeted to 150 degrees shortly thereafter. I think most cars where this will be installed already have an electric coolant pump on-board powering the engine coolant system. In most cases, it is simplest to just tap into high- and low-pressure and let the engine coolant do the work. It may take slightly longer to cool everything between rounds, Meziere said. From our testing, this time difference seems negligible. I have not received a lot of feedback regarding longer trips and how the pan affects temperature during highway driving. Super-extreme-horsepower applications are a different matter... 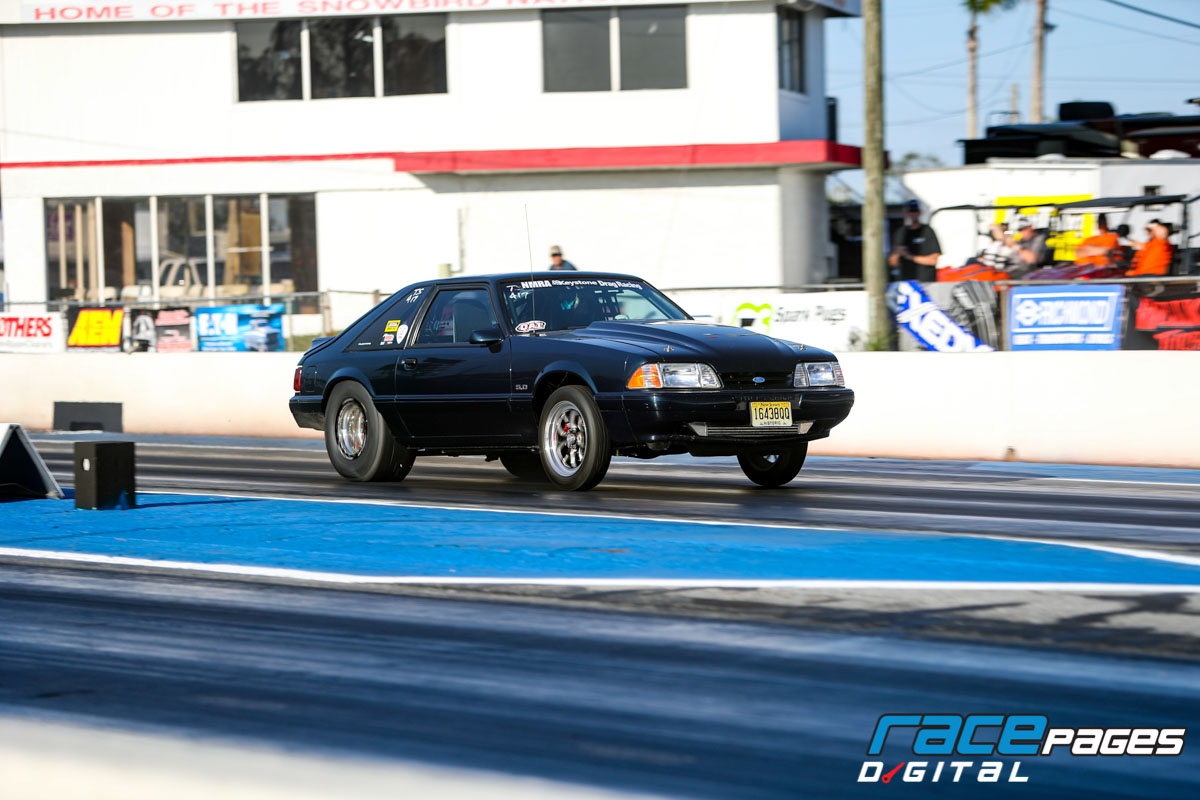 Originally designed for bracket-racing applications, these pans are ideal for the extremely taxing True Street racing environment, where long cruises and hot-lapped passes stress vehicle cooling. One such racer using the pan to success is Mike Jovanis and his 7-second Fox Mustang. In NMCA and NMRA ranks, those mega-power applications are plentiful, and some of them operate in the high-stress environments of Torqstorm Superchargers True Street and QA1 True Street, where a 30-mile cruise and three back-to-back passes really stress every system on a street/strip machine. In those instances, a dedicated cooling system for the pan is a wise move. When a customer is running a turbocharged drag car or some combination that punishes transmission fluid, we recommend this pan in conjunction with a chiller to take heat out quickly, Meziere said. Using the engine's system is good for most racers because it only takes 10-15 minutes to take 60 degrees out of the engine and transmission fluid. With extreme cases, that's not really enough. An application that is powerful and operates in a grueling environment is Mike Jovanis' 1989 Mustang LX. He is a notable user who stepped up to the initial Powerglide version of the pan and saw transmission temperatures drop in half from 260 degrees down to 130 by running the water pump and cooling fan between rounds in his 7-second stallion. Now, TH400 applications can also enjoy the same benefits, and these pans have developed a loyal following. Referrals and repeat customers are our best gauge. There are prominent racers who will choose to build a new car every two to four years, Meziere said. When they call back for another pan, there's proof that they have been sold on the effectiveness of the product. One racer sent me a text raving about it; something to the effect of, I love it like a kid loves cake! And in the case of Meziere Enterprises' heat-exchanger transmission pans, you can have those cooling benefits and let your hot rod eat on the track without fear of the transmission temperatures ruining the high-performance party. SOURCE Meziere Enterprises (800) 208-1755 Meziere.com