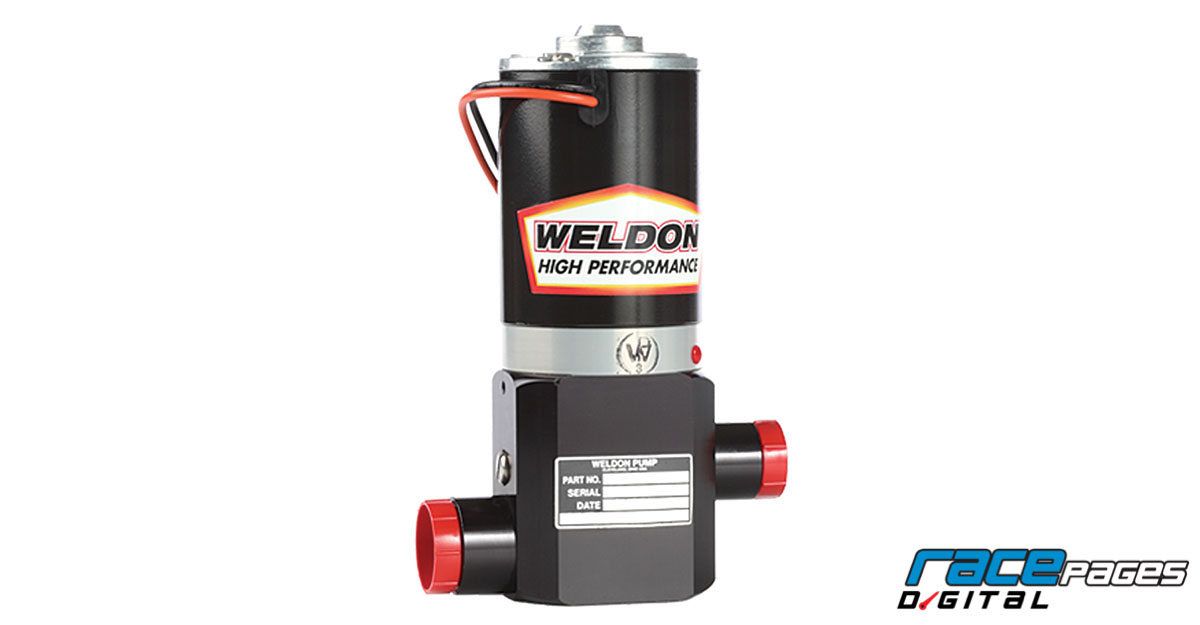 In a naturally aspirated, fuel-injected application the Weldon 2345-A electric fuel pump can support as much as 2,800 horsepower. Based on a billet aluminum body with a tool-steel pump element, it weighs on 7 pounds. It is compatible with diesel, ethanol, gasoline methanol, and all racing fuels. When it comes to delivering mega-four-digit power in a racing application, running a fuel pump that is up to the task is a literal lifeline. Not only is a quality pump essential for producing maximum power, but it is key to the survival of the engine when your foot is too the floor. A name synonymous with high-performance fueling is Weldon. That said, the fueling products for automotive applications are only part of the company's business. That diversity actually helps the company develop better products for high-performance applications. The Weldon pump element uses a leaded-bronze pump bearing with a tool-steel pump element. This element allows the pump to reach higher pressures while keeping the electrical draw on the motor low, resulting in higher flow rates. Meanwhile, the tool-steel blades do not deform or bend as the pump pressure increases which keep the blade pushed tight to the pump ring which eliminates any internal leak paths, Jim Craig, Racing Products Manager at Weldon, explained. Weldon's main business is aviation and military flight applications, Racing is only 20 percent of the overall business and we only have one manufacturing facility. So, the components used in a Weldon Pump are produced using the same standards as the aviation and military side. We hold an ISO 9001:2015 + AS9100D rating. 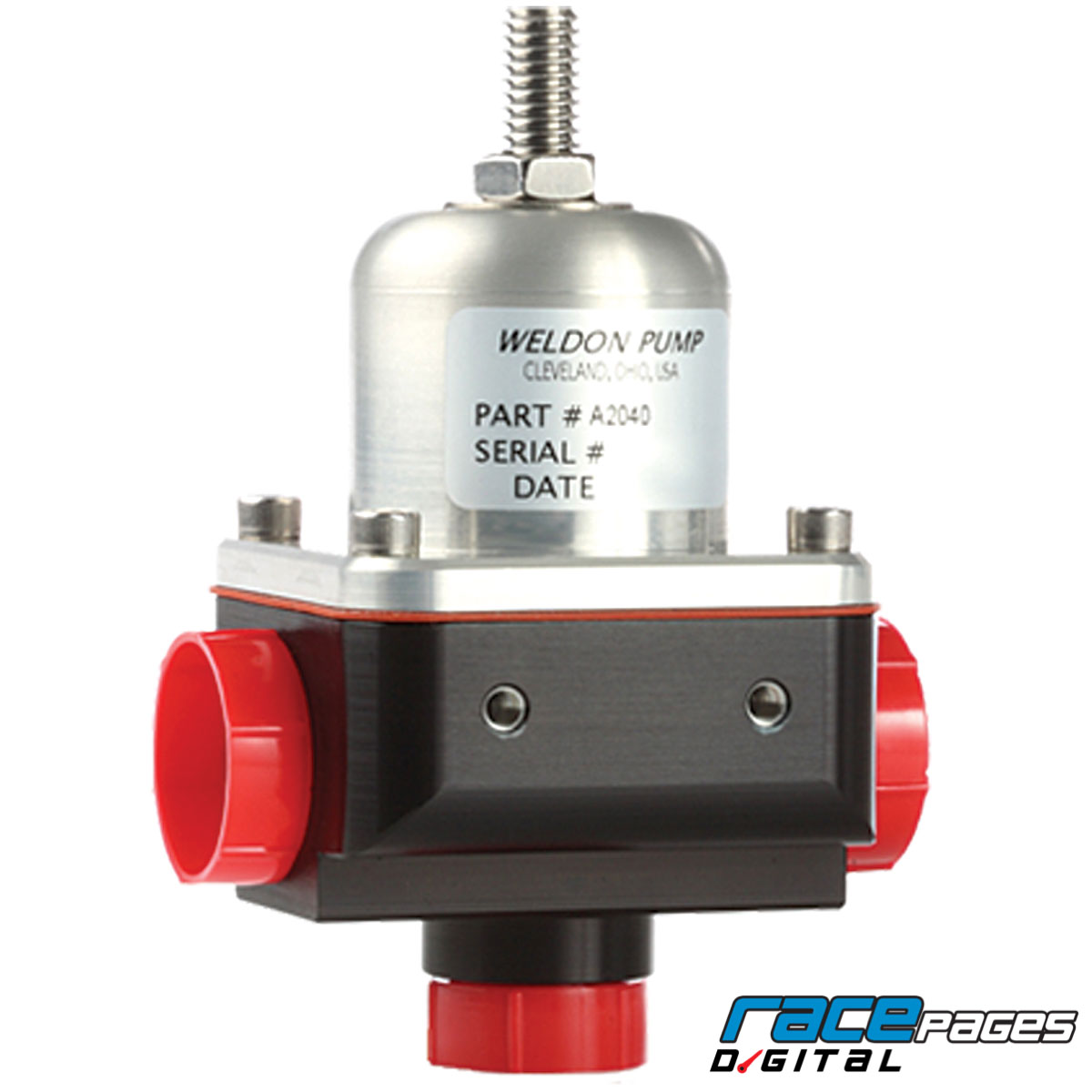 Of course, a high-performance fuel pump needs a proper supporting cast, including quality fuel filters and a regulator like the Weldon A2047 Series bypass regulator. This billet aluminum unit features a Teflon diaphragm with an O-ring seal and is adjustable between 28 and 120 psi. It features ample -12 pressure and return ports, and 1/8-inch ports for gauge and manifold pressure references. While the company offers a number of pump applications that serve the NMRA and NMCA racer, one that is in the sweet spot for a lot of these combinations is the 2345-A pump, which supports four-digit power in carbureted and fuel-injected applications running a variety of fuels. With a billet aluminum body, this self-priming pump features the aforementioned tool-steel pump element. Its breakaway coupling prevents damage from contamination, and it is completely serviceable.The pump can be used in carburetion, as well as EFI applications, using the proper bypass regulator. The pump at 30 psi can support 3,000 horsepower, while at 80 psi it will support 2,400 (using 16 volts). Now these power levels are with non-ethanol or methanol fuels, although it will support 1,000 horsepower on methanol at 80 psi, Craig said. If you've got a combination making 1,600 to 1,900 wheel horsepower and using race gas, this pump will support that. Now there is an exception to the horsepower limit, that being centrifugal blower applications. Those require additional fueling capacity to support the blower, so you'd be somewhere around 1,200 to 1,400 horsepower. 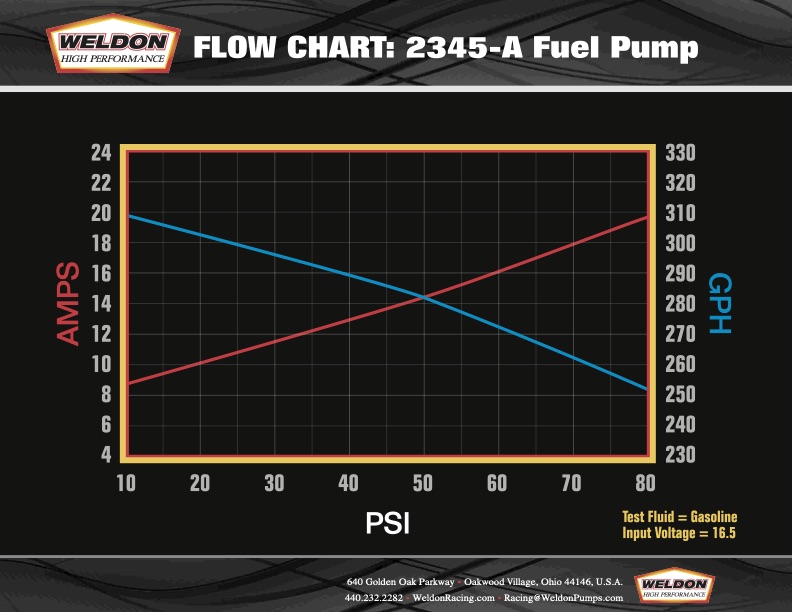 When fed with 16.5 volts, the Weldon 2345A delivers impressive flow of up to 310 gallons per hour, which is sufficient to support horsepower output north of 1,400. When wired properly and supported by one of the company's fuel-pressure regulators and fuel filters, these pumps with deliver reliable fuel flow to support huge power. A dedicated switched ignition relay is best and it needs to be a name brand. Things have gotten better with all the solid-state relays readily being used as well now with most aftermarket ECUs, Craig said. Honestly, as the years have gone by, the racers are really getting with the program regarding wiring with their vehicles. Most, if not all, are really spending some time on it to make sure it is fail-proof and if they have problems can easily trace it and fix it. This attention to a detail that previously was a second thought, really helps and ensures any electrical device operates at that optimum level. 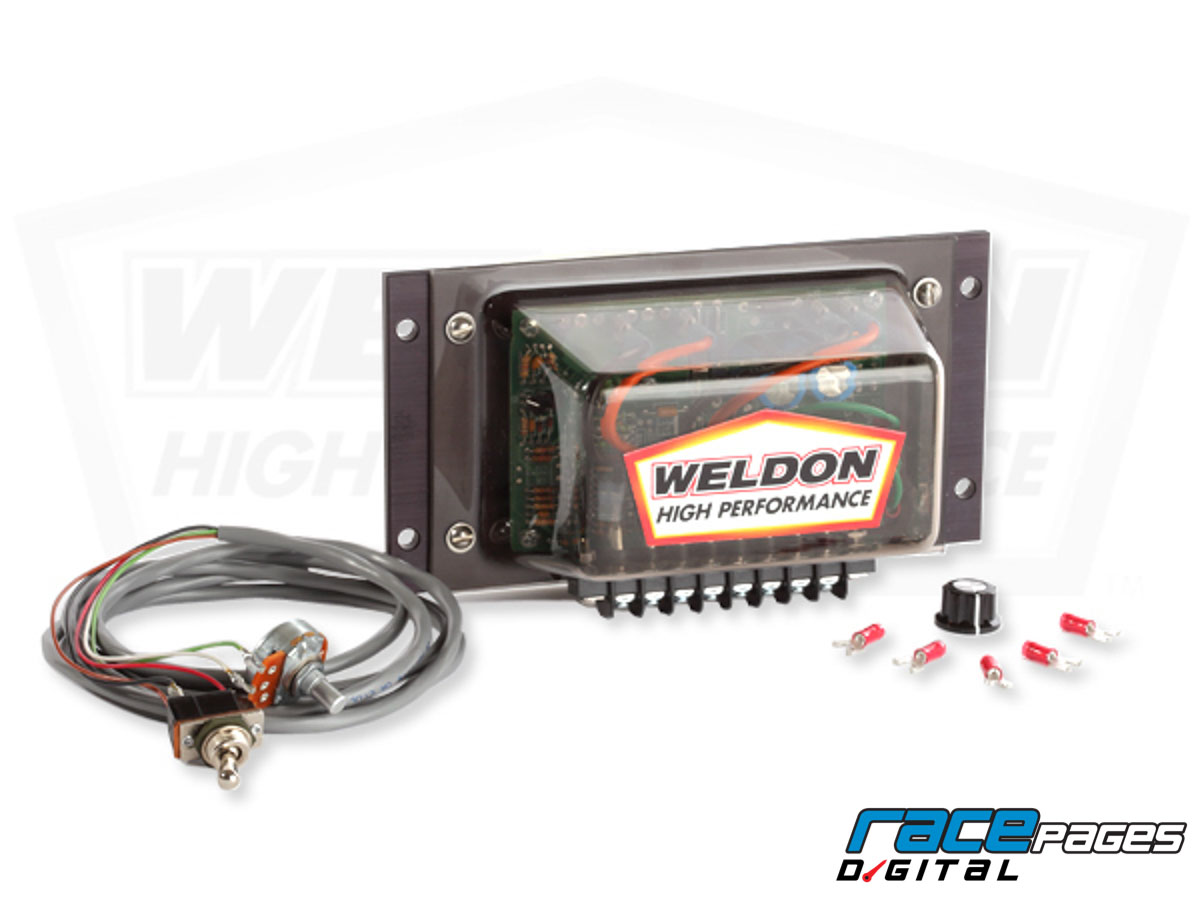 While the Weldon 2345-A fuel pump is designed for racing applications, it will work in the rigorous environs of NMRA QA1 True Street and NMCA TorqStorm Supercharger True Street where a street cruise and back-to-back drag strip passes stress every system on a vehicle. For such a setup, you should run the Weldon 14000 Pump Controller to modulate fuel pump voltage and flow for cooler operation on the street and switch back to full output on the racetrack. And racers have put the company's pumps to good use for decades. For example, John Urist ran the 2345-A on all of his NMRA championship-winning Mustangs before making the move to direct injection in recent years. That is long and storied list. Way back we had Moran, Musi, Tony Christian, Steve Grebeck, Scranton Brothers and the like. I believe Mike Moran and Pat Musi (along with a few import guys) got the first units in '02. You know, the 14-volt version of the pump (B2311-A) was used in NHRA Pro Stock during the mid- to late-'90s we probably had 85 percent of them using that pump, Craig said. As to current guys, we've got Chris Holbrook and Eric Bardekoff to name a few along with a host of others that are using either the 2015, 2025 or even the 2035 series fuel pumps with great success. 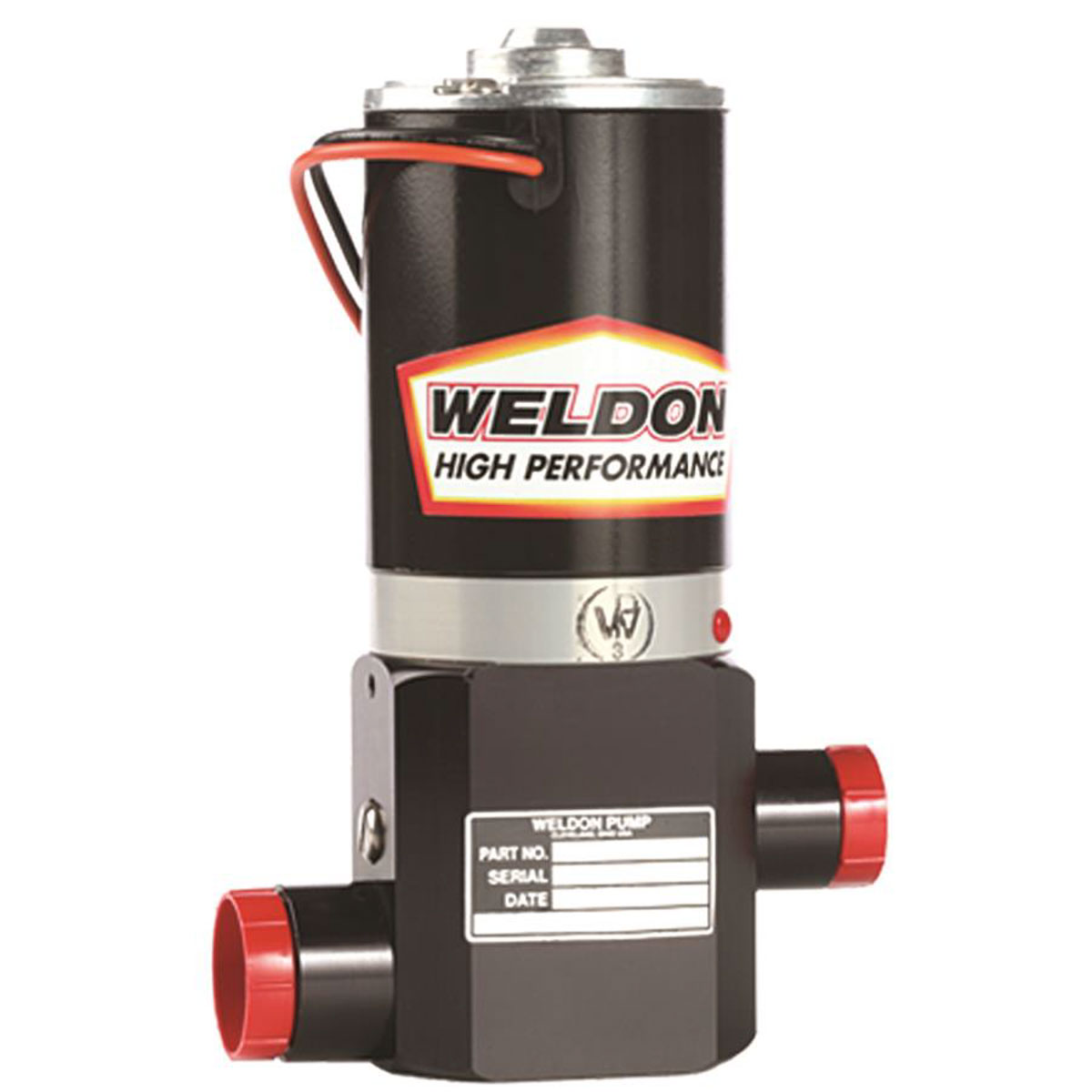 ...All of our billet bodied fuel pump feature pump elements that use components of the same material the same leaded bronze bearing, tool steel rotor, blades and ring, Jim Craig, Racing Products Manager at Weldon, said. With the similar pump construction allows Weldon pumps to be able to have the highest flow rates at higher fuel pressures, while drawing the lowest amps, which makes for a very efficient fuel pump assembly. While the 2345-A pump, in particular, is designed primarily for dedicated racing applications, it can also work in the rigorous environments of NMRA QA1 True Street and NMCA TorqStorm Superchargers True Street where a 30-mile cruise and three back-to-back passes serve as a torture test for all the vehicle's systems. Yes, the pump can be used in True Street applications where the controller (PN 14000) can slow it down for all your street driving and then power up to make your passes, Craig added. The controller is basically a two-step for the fuel pump where it allows the pump to operate at a reduced speed (which equates to a lower fuel pressure level) which will slow the volume of fuel being pushed through the system, which will minimize the possibility of vapor locking the fuel system due to heat. Obviously this pump can cover a lot of ground, so If you need to fuel an engine producing more than 1,400 horsepower, the Weldon 2345-A retails for $1,263.88. SOURCE Weldon Pump (440) 232-2282 WeldonRacing.com
fuel pump