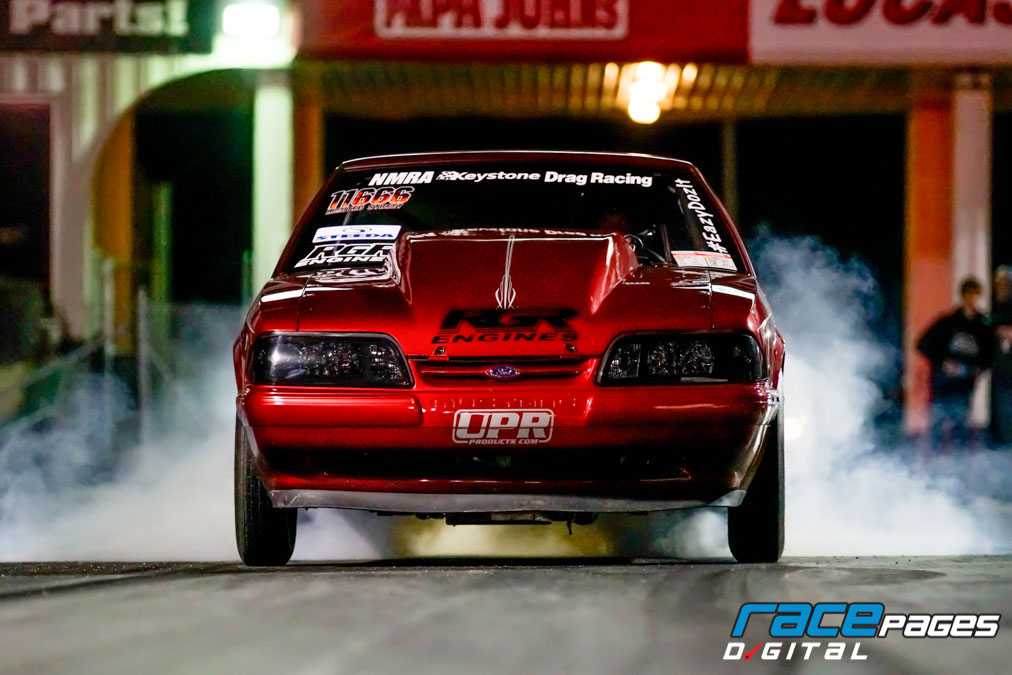 Coyote-swapping Fox-Body Mustangs is all the rage, and at the forefront of that trend was longtime NMRA racer Michael Washington, who shelved his pushrod powerplant and dropped in a 5.0-liter Coyote engine into his Mustang to go Coyote Stock racing way back in 2013.

While Washington enjoyed the sealed crate engine class, he wanted to see what the Coyote engine platform could do beyond the stock configuration, and that ultimately put him on the path to creating his #PureEvil project.

Not wanting to break apart his Coyote Stock car, Washington put the word out that he was looking for a chassis to build a new car with. Fellow NMRA racer Steve Gifford had just the right car, as he and Ken Bjonnes had started a build for NMRA Real Street, but scuttled the project after the class faded away.

The 1993 Wild Strawberry notchback had a cage installed, but that was the extent of the changes and/or upgrades. It was the perfect vessel for a malicious new motor.

I sent the car out to get sand blasted because there was so much surface rust, Washington told us. Even the chrome-moly, 8.50-certified roll cage had surface rust on it, as it had never been painted post installation as the car sat in storage for some time. Fellow NMRA racer John Kauderer set Washington up with his friend Bill Matuzak, who sprayed the fresh coat of Wild Strawberry Metallic, and Washington picked up a donor car to grab the interior out of it.

I started building it as a simple Coyote-swap car with a sealed motor to shakedown the chassis, and ran it at World Cup like that with a TKO and went 9.77, Washington recalled. This was with a bone-stock Gen 1 Coyote engine.

I was going to build a top-shelf Coyote motor to go Pure Street racing and Galimi said ˜Were going to get a GT350 motor and get crazy. Lets find out what you can do with one, he added.Â The GT350 engine that Galimi spoke of came from conversations with this author about Ford Performances Aluminator 5.2 XS engine, which was a newly released, naturally aspirated, Coyote-based crate engine packing 580 hp. 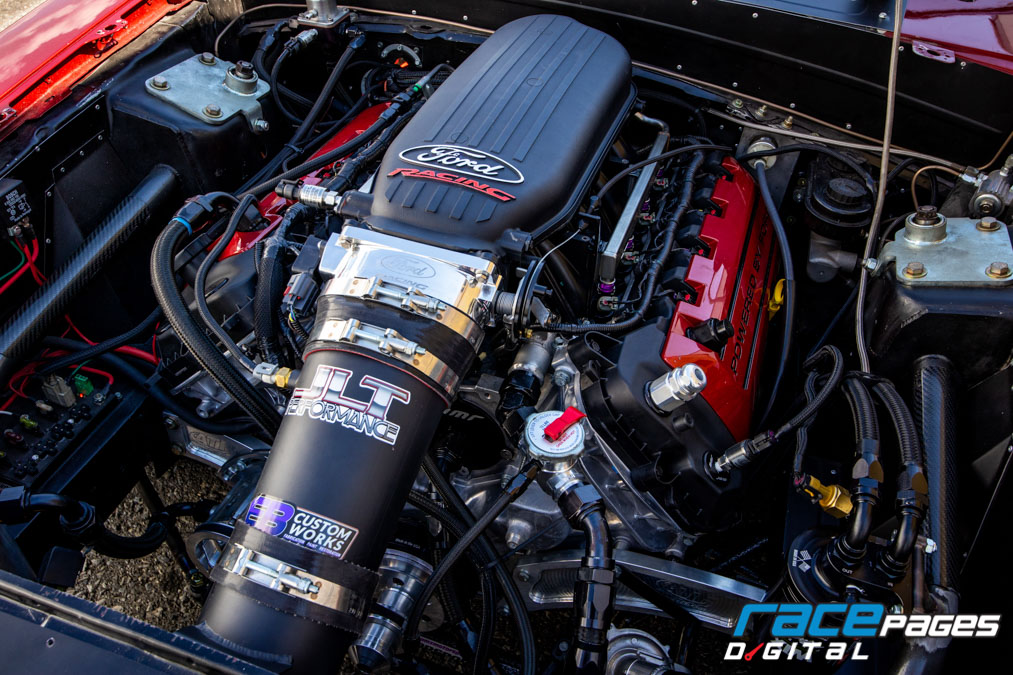 Wondering what something like that might do in a Fox Mustang, former Ford Performance racing rep Jesse Kershaw entered the discussion and it was he who suggested building something one-off with a GT350 block and heads. Galimis gears started turning and it wasnt long before he decided that Fastest Street Car magazine needed to go big and set the naturally aspirated Coyote engine record and he knew of just the right person to pull it off.

Knowing high revs would be in the cars future, Washington approached G-Force Racing Transmissions for a G101A four-speed manual transmission, and bolted it to the engine with an off the shelf Spec clutch.

Comtrolling the Coyote/Voodoo powerplant is an AEM Infinity engine management system tuned by Eric Holliday of JPC Racing. On the JPC dyno, #PureEvil pumped out 592 horsepower to the wheels on VP Racing Fuels C16, and later over 630 on VPs C85. Thats stout for just 314 cubic inches of displacement!

#PureEvil first appeared in competition at the 2017 World Cup Finals in Maryland and out of the gate, Washington banged the gears in the G-Force transmission to a 9.03 and a 9.05. A test session shortly after that race at nearby Atco Raceway saw some much needed suspension changes prove their worth, but Washington would have to wait until the following year before he would put his hands on the elusive 8-second time slip.

In 2018 NMRA launched the Limited Street class, which was largely aimed at power adder-equipped cars, but also had provisions in the rules for naturally aspirated machines and #PureEvil fit right in. At the season opener in Bradenton, Washingtons coupe went 9.21 and made it as far as the semifinals with a 9.20. Not quite as quick as he had hoped, but watching the car go down track, it looked much more stable and straight going down track, which was a move in the right direction and no doubt a result of the previously mentioned suspension adjustments. 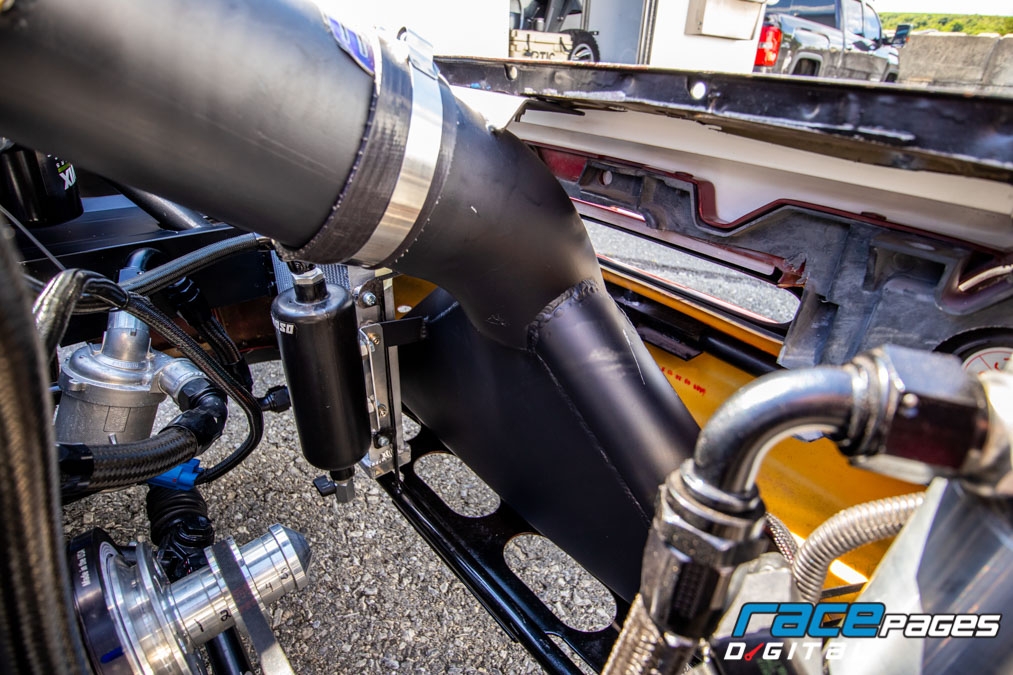 Just a month later, Washington entered at the NMRA/NMCA All-Star Nationals in Atlanta, Georgia. With a little assistance from Menscer Motorsports, along with adding tubes to the slicks thanks to advice from Street Outlaw racer Many Buginga, Washington went to the final round of eliminations where he would runner-up. #PureEvils 9.11 at 149 mph was an improvement, as was Washingtons personal best 1.28-second 60-foot time achieved there.

Before the next race, Washington made another trip to Atco Raceway in south New Jersey for a test session and cracked off a 9.02 right out of the trailer. His next run would be the glory pass, with an 8.97 at 148 mph flashing up on the clocks! The third and final pass of the day backed it up and then some, with an 8.95 at 150 mph. That made #PureEvil the first naturally aspirated Coyote engine in the eights, and the quickest naturally aspirated, Coyote-powered machine in the world!

After an uneventful appearance at the NMRA race in Maple Grove, Pennsylvania, Washington yanked the engine out and engaged the #PureEvil 2.0 plan, which as Washington put it, included more, more, more ¦ more of everything.

For the combo, Washington decided it would be good to have a spare engine, and building on what was learned from the first iteration, RGR started the new build with a sleeved 2011 5.0-liter block and added a customized forged steel crank, custom billet Oliver connecting rods, and Diamond pistons. Groh ported the GT350 cylinder heads and the new displacement clocked in at 339 with the compression ratio jumping from 14:1 to 17:1! 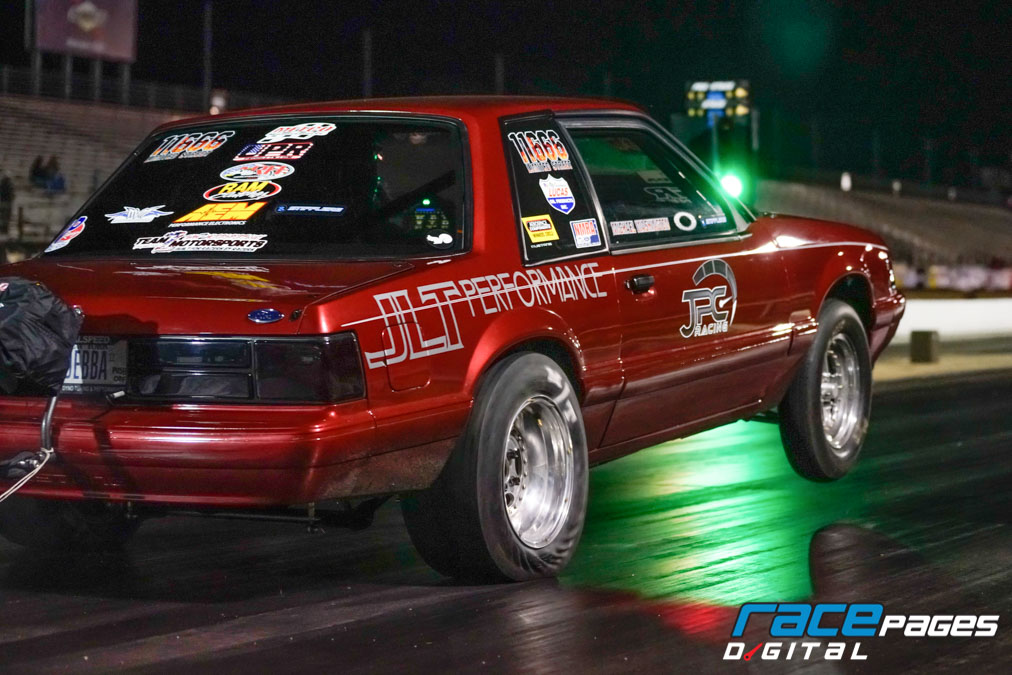 At that point, Washington switched the car over to a diet of VP Racing Fuels Q16, and added a Brett Farber-ported Cobra Jet intake with a mechanical throttle body. On the exhaust side, he enlisted the help of American Racing Headers to build a set of larger 1 7/8-inch primary long-tube headers and once again tuned on the JPC dyno by Holliday, power jumped from 630 to 744 rear-wheel horsepower.

I took the car apart and didnt get it back together until April of 19, Washington explained. The more of everything he spoke of also included a new Black Magic clutch, TBM brakes, and custom Bogart wheels. And as clutch drops on any Fox with slicks take their toll on the torque boxes, doing so on a car with this much power required some fortification in that area. To that end, Washington had EB Customs install fully adjustable upper and lower torque boxes from Team Z, a beefy Strange Engineering 9-inch rearend, and an Outlaw K-member at the front of the car.

At the NMRA Ford Motorsport Nationals in Maple Grove in 2019 Pure Evil 2s debuted in competition, and Washington stopped clocks in 8.85 seconds. He later improved that to an 8.77 before bowing out of eliminations that weekend. Just a short while later at the NMRA finals in Bowling Green, he qualified with an 8.86 and added an 8.88 in the first round of eliminations before heading for the trailer.

With the NMRA championship season completed, it was time to focus on the World Cup Finals event. Washington put the coupe on a strict diet and pulled a bunch of weight. Cutting the fat and swapping to a G-Force GF-5R five-speed clutch-less manual transmission for that race got the car down to just 2,500 pounds (2675 is his weight for Limited Street). At Maryland International Raceway, Washingtons efforts proved successful, allowing for an 8.54 and 8.56 elapsed times, and during a post-race test day, Pure Evil clocked an 8.47 in mineshaft air and the aforementioned 2,500-pound race weight.

Ahead of the 2020 NMRA drag racing season, the NMRA technical department made a change to the rules that gave a weight break to this engine combination. With that, Washington was able to qualify fifth in the Limited Street category with an 8.56 at 156 mph. Just when he was catching up, though, the turbo cars in the class had been busy in the off-season, too. They clicked off several passes in the 8.4-second range at 160 mph or better.

It remains to be seen how the rest of the year will shake out, but rest assured Washington will continue to fine-tune the combination, and Rich Groh isnt done finessing #PureEvils Coyote just yet. 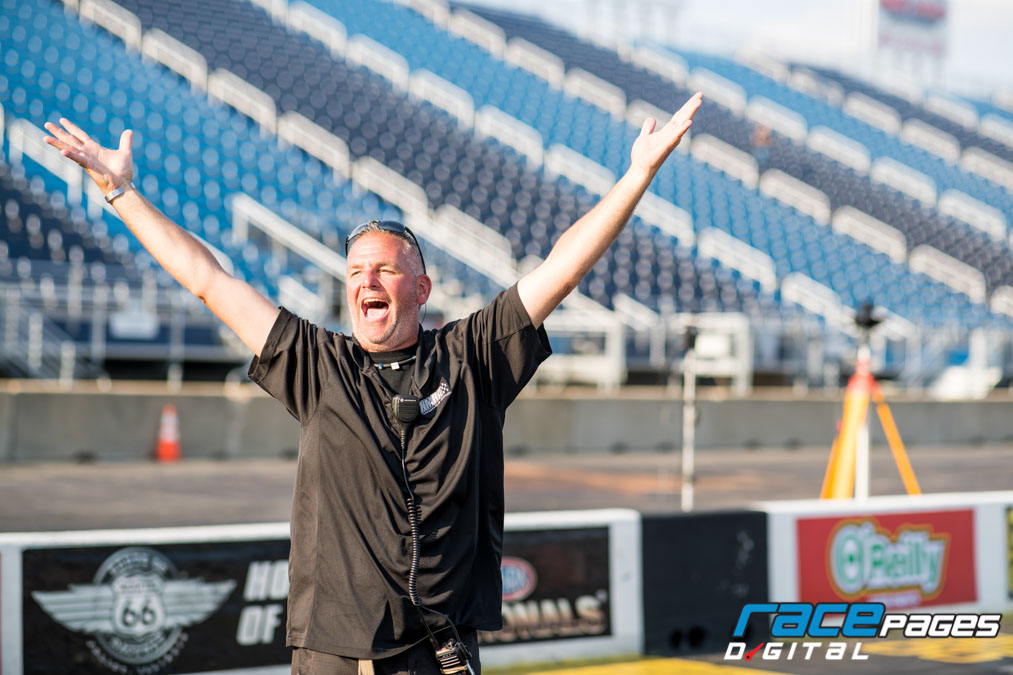 Washington set out to claim the naturally aspirated Coyote record, which was previously held by the JDM Engineering-tuned 2013 Cobra Jet of Don Carson, which had clocked a 9.40 at an NHRA Stock-legal weight. Washington and Carson traded time slips for a while, with Washington going 9.17 and Carson going 9.12. Washington eventually went into the 9.0s and Carson pulled the weight out to get a 9.06, but #PureEvil eventually claimed the first 8-second run and hasnt looked back.

Carson continues to stay focused on NHRA competition with his Coyote-powered machine, but NMRA racer Matt Williams mounted a challenge to Washingtons record, and built a four-eyed Fox Mustang that has been as quick as 8.85 in at legal weight and 8.77 in outlaw trim. Rumor has it there is another challenger as well, with both of these cars featuring RGR engines.

Its the quickest car Ive ever owned, said the gear-banging, Fox Mustang pilot. Maintenance has been easy, with just oil changes needed. I have the engine freshened every 50 passes or so, which is about a seasons worth. All of the Coyote cars are cool I cant see myself building another pushrod car. Were doing stuff thats uncharted and different. We didnt know if you could do this, as no one had ever done it before. 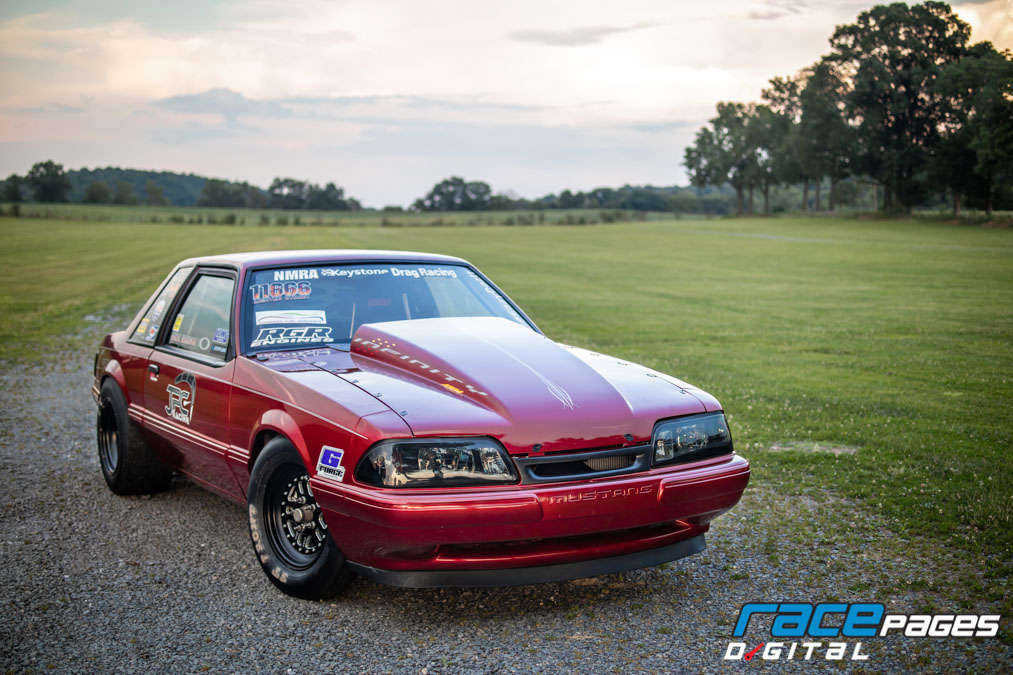 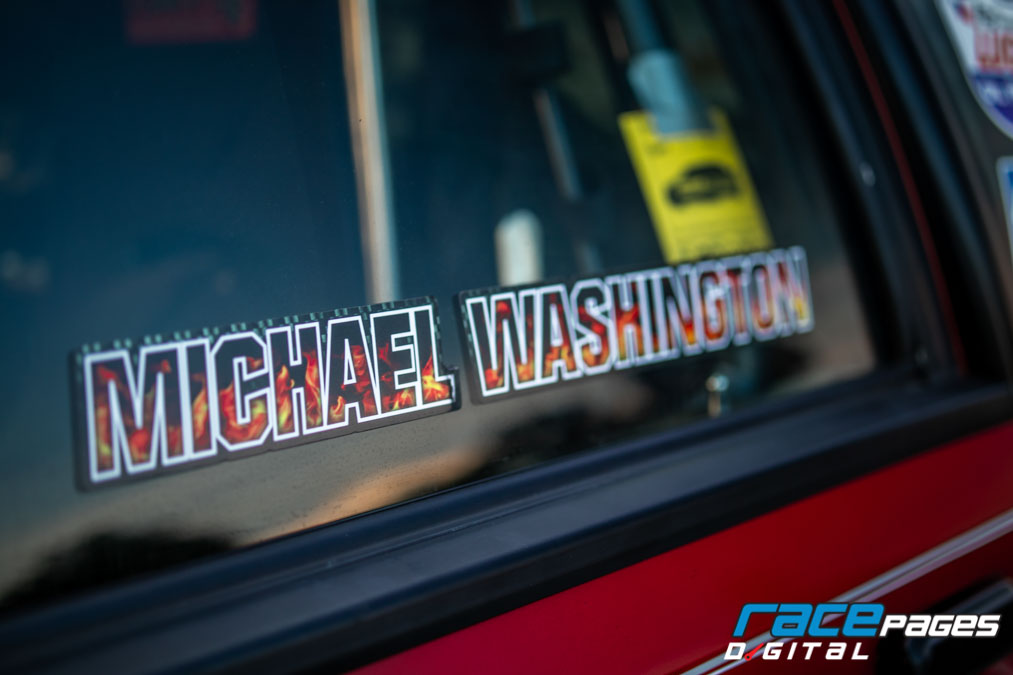