The Nitto Tire NMRA/NMCA Super Bowl of Street Legal Drag Racing presented by HPJ Performance gets underway today and kicks off four days of heads-up and index racing here at World Wide Technology Raceway at Gateway. This event is the second of three events in 2020 where the NMRA and the NMCA drag racing series come together, but it is the only one of the three where the winners of each series face off at the end of the day on Sunday in the Super Bowl to determine which series takes home the Nitto Diamond Tree rings and the Super Bowl prize money. 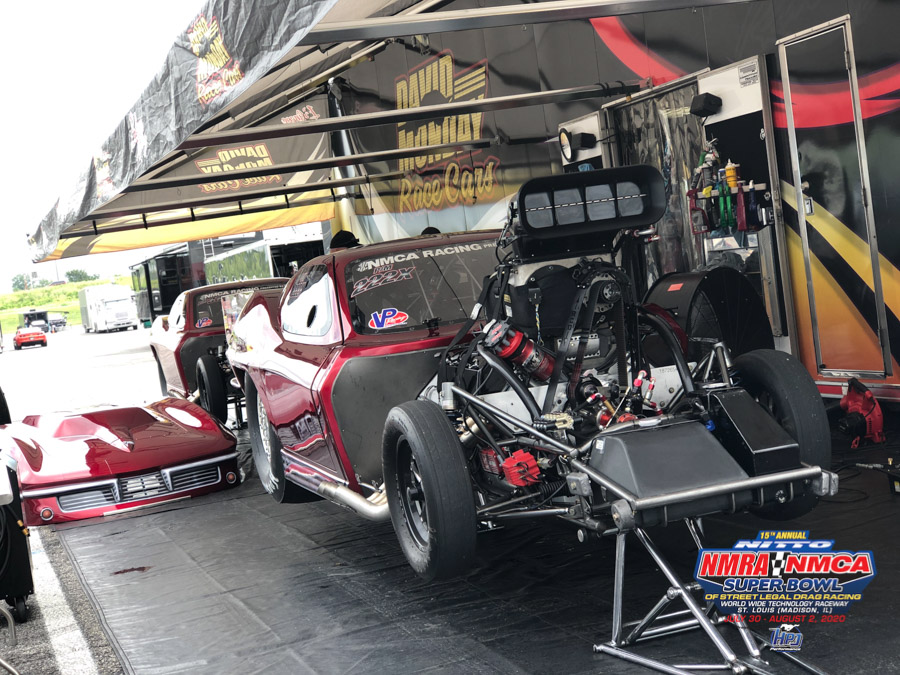 The previous race in Commerce, Georgia proved to be a tough one for racers as most struggled to get a handle on the track conditions, and the off-pace qualifying of David Monday and Tom Blincoe were proof of that. Both cars charged hard in eliminations, clocking runs in the 3.8-second range, but eliminations proved tough. Here in St. Louis, both Monday's mechanically injected, screw-blown Corvette and Blincoe's ProCharged and electronically fuel injected Corvette are here at World Wide Technology Raceway at Gateway for another go at VP Racing Lubricants Xtreme Pro Mod. 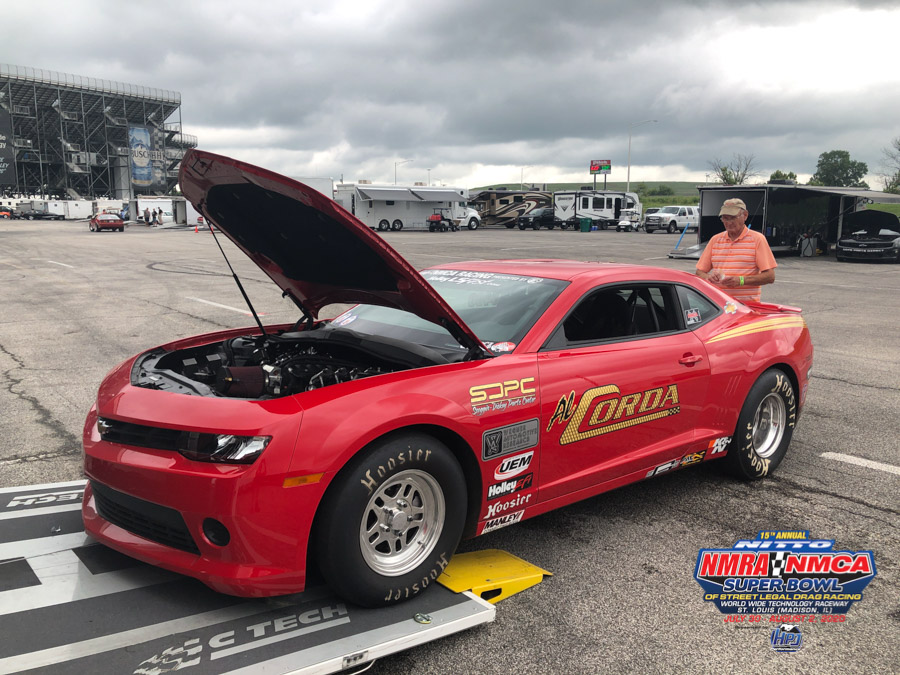 LME Street King competitor Al Corda is here to compete in the Chevrolet Performance Challenge Series with his 2015 CRC Camaro. Corda noted that if you're building a race car, buying a Camaro Rolling Chassis is a much quicker way to build one, and a great choice over a full-blown COPO Camaro Â if you plan on installing your own drivetrain, which he did with his Wegner Automotive power plant. Corda may also jump into the Coan Stock/Super Stock Combo class as well this weekend if the schedule doesn't have him hot lapping the car. We caught up with Mike Ciborowski who was on detail duty this weekend with his son Kyle's 2006 Mustang GT. He might also be making a test hit on the car tomorrow morning, as his son's work obligations will keep him from getting to the track in the AM. Kyle, with help from his dad and brother Keith, swapped out the 3-valve/5R55S drivetrain and interior from this car with that of a 2011 Coyote-powered Mustang GT. Everything down to the wiring system made the swap and the car, now equipped with a supercharger and 6R80 transmission is capable of 9s, but the Lindenwood University student will have to dial it back for QA1 True Street competition this weekend. 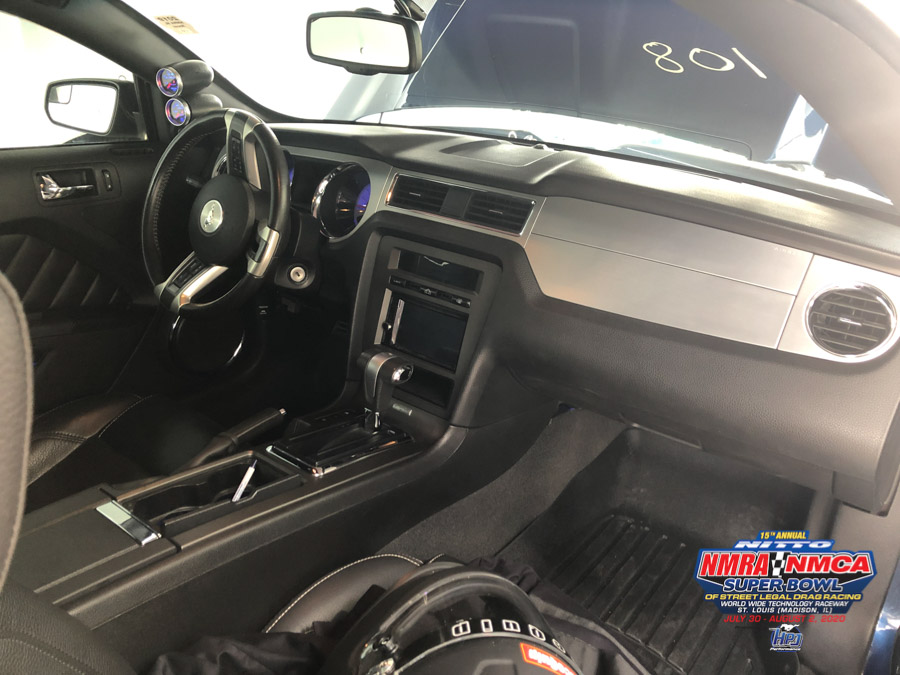 TorqStorm Superchargers signed up as the 2020 class sponsor for the NMCA True Street class, and the company has fielded a couple of cars at both events so far this year and taken home some class awards. TorqStorm co-owner Scott Oshinski just finished up some changes to his 1972 Oldsmobile Cutlass Sa car he has owned since 1994and plans to run it in True Street this weekend. The car is a heavy hitter both literally and figuratively. It tips the scales at over 3,800 lbs while packing a 540ci big-block Chevy with twin TorqStorm superchargers that help produce 1,181 horsepower. The Cutlass slashed the clocks in 9.29 seconds during a recent test session, but as Oshinski doesn't have a competition license, he'll have to dial it back a tad for this weekend.

Edelbrock Xtreme Street racer Tim Knieriem went into the previous race in Commerce wanting to make some changes to the team's SN95 Mustang. Like many other race teams, though, Â they struggled with the track conditions and never had the time to make the changes. Now heading into the Super Bowl this weekend, Knieriem said the changes were made, and they were hoping to find out if they worked the way they had hoped during today's now-cancelled test session. The team will get another test session on Friday, and hopefully the changes were in the right direction. 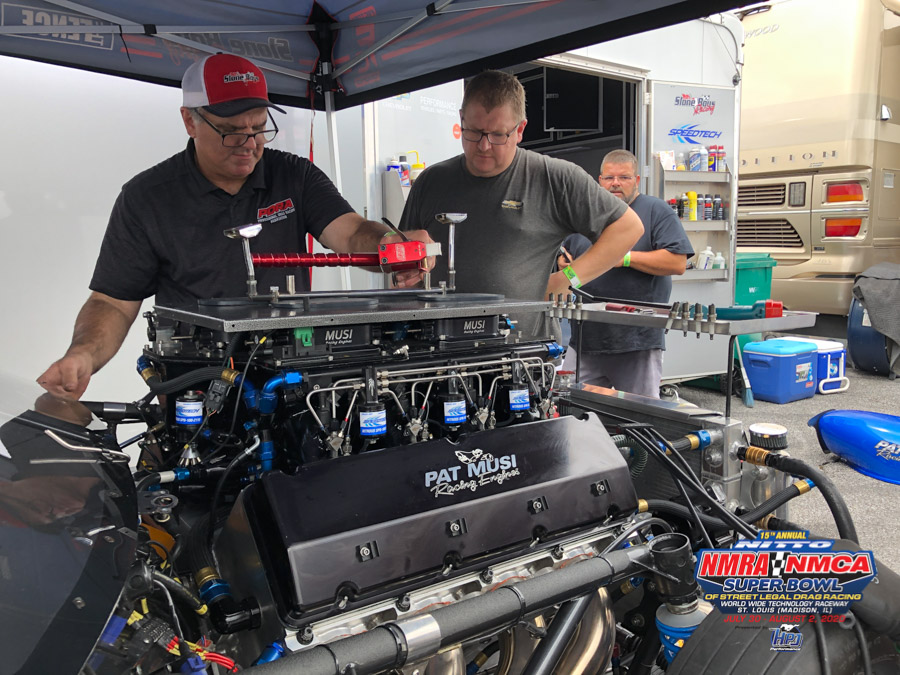 VP Racing Lubricants driver Jackie Slone Jr. (at left) was at the top of the qualifying sheet in Commerce after the first round, but a corrupted EFI calibration put them out of the night time session and other racers were able to get a head of them by the time eliminations rolled around. "I think we'll have a good car this weekend," Slone told us of his Pat Musi Racing Engines-packing, nitrous-enhanced machine. "We should be top three for sure." 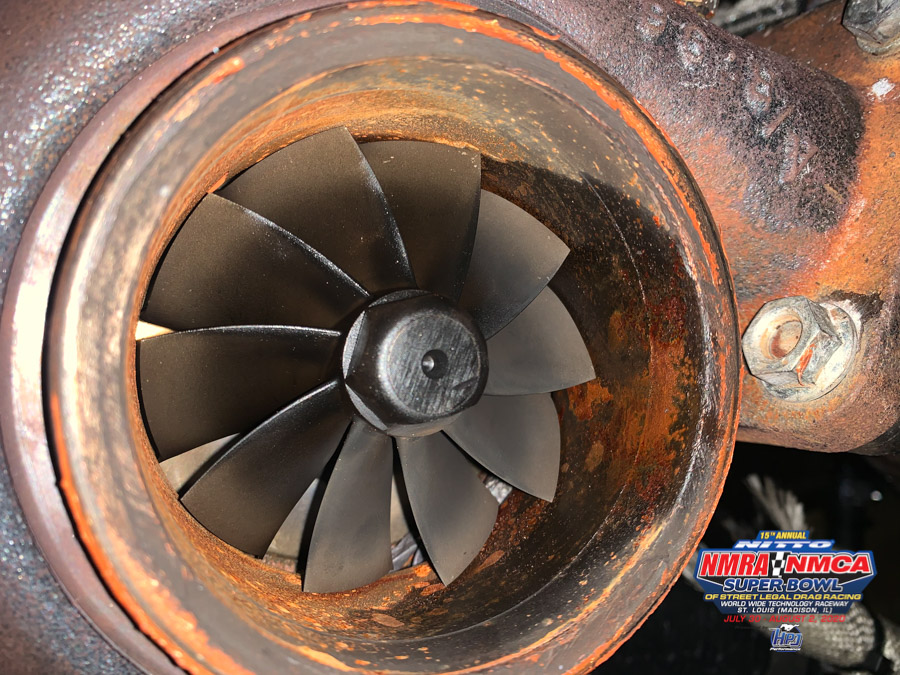 JDM Engineering Limited Street racer Jason Davis lucked his way to the final round of competition in Georgia last month as his ailing S550 Mustang had a host of problems initiated by the flexible stainless steel exhaust coupler coming apart internally, getting sucked through the turbo and going into the engine. The Blow-By Racing entry got to work back in Florida and tore things down. A few bent valves got the engine back together, but the team also noticed that the Cobra Jet intake ports did not match up with the cylinder heads, so the team switched to a Holley intake, which unfortunately required a parts store hood scoop to cover the hole they had to make to fit it. A newcomer to the Proform Rumble category in Commerce, Steve Satchell dropped his C6 Corvette off at Jessie's Garage for an 8.50-cert roll cage right after the event and picked it up just a short while later. Satchell plans to step up into the LME Street King category, possibly before the season wraps up, and will stay in that class going forward. 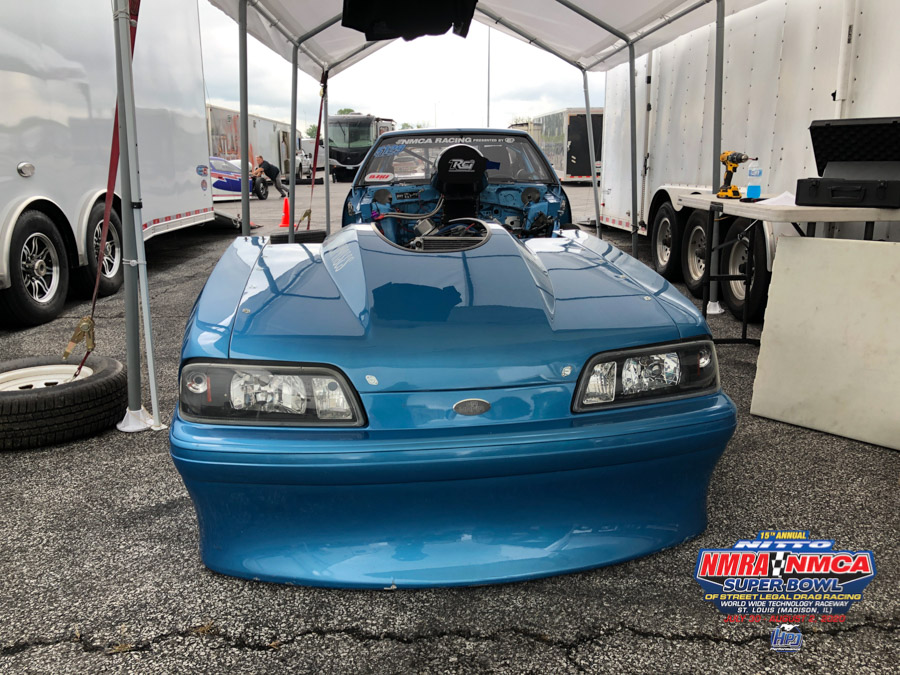 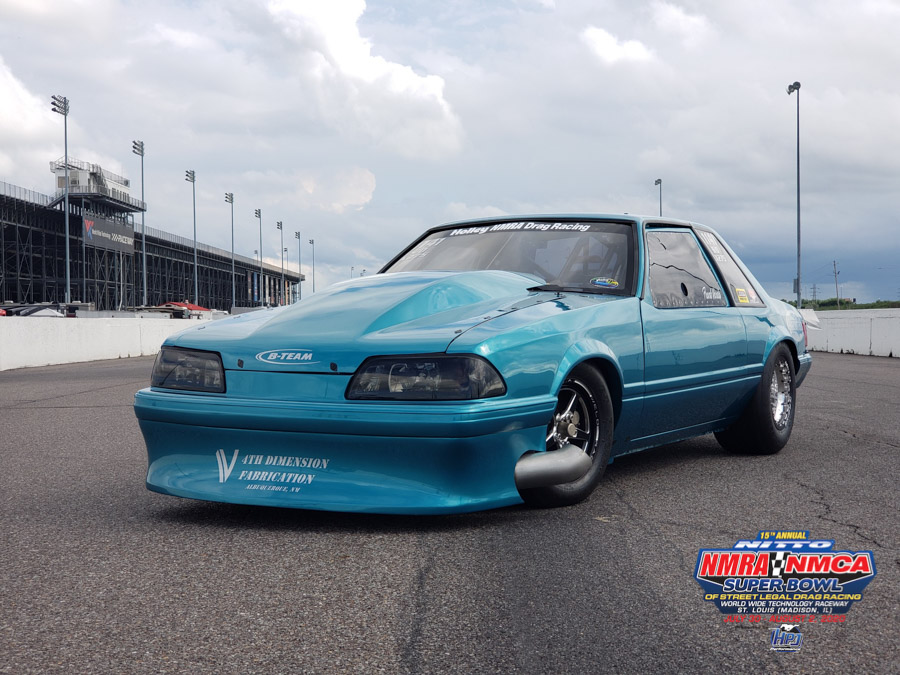 The newest addition to the Hellion B-Team is Frank Varela's new VP Racing Madditives Street Outlaw coupe and it makes its debut this weekend here at World Wide Technology Raceway at Gateway.   Due to possible inclement weather, today's test and tune was cancelled. Here is Friday's schedule. 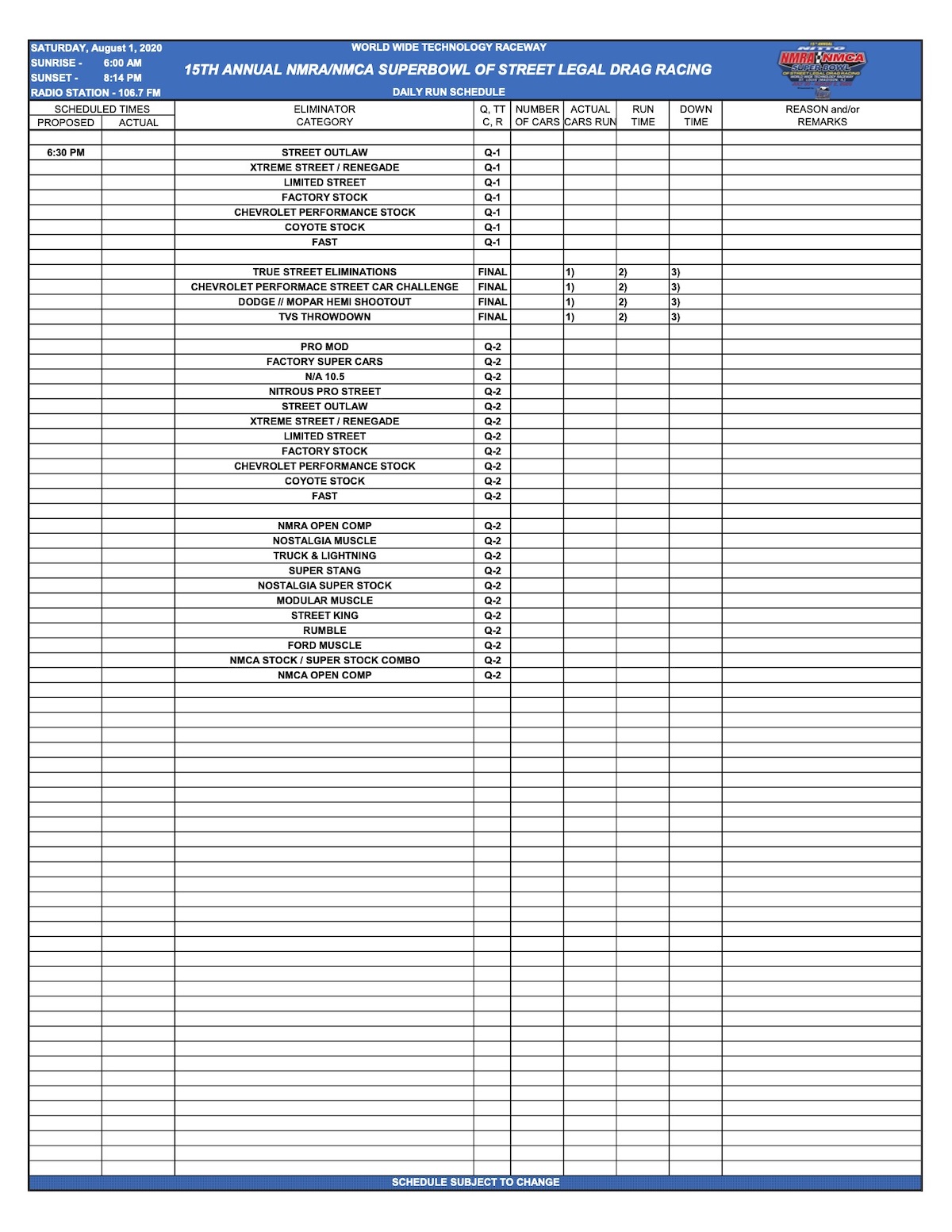 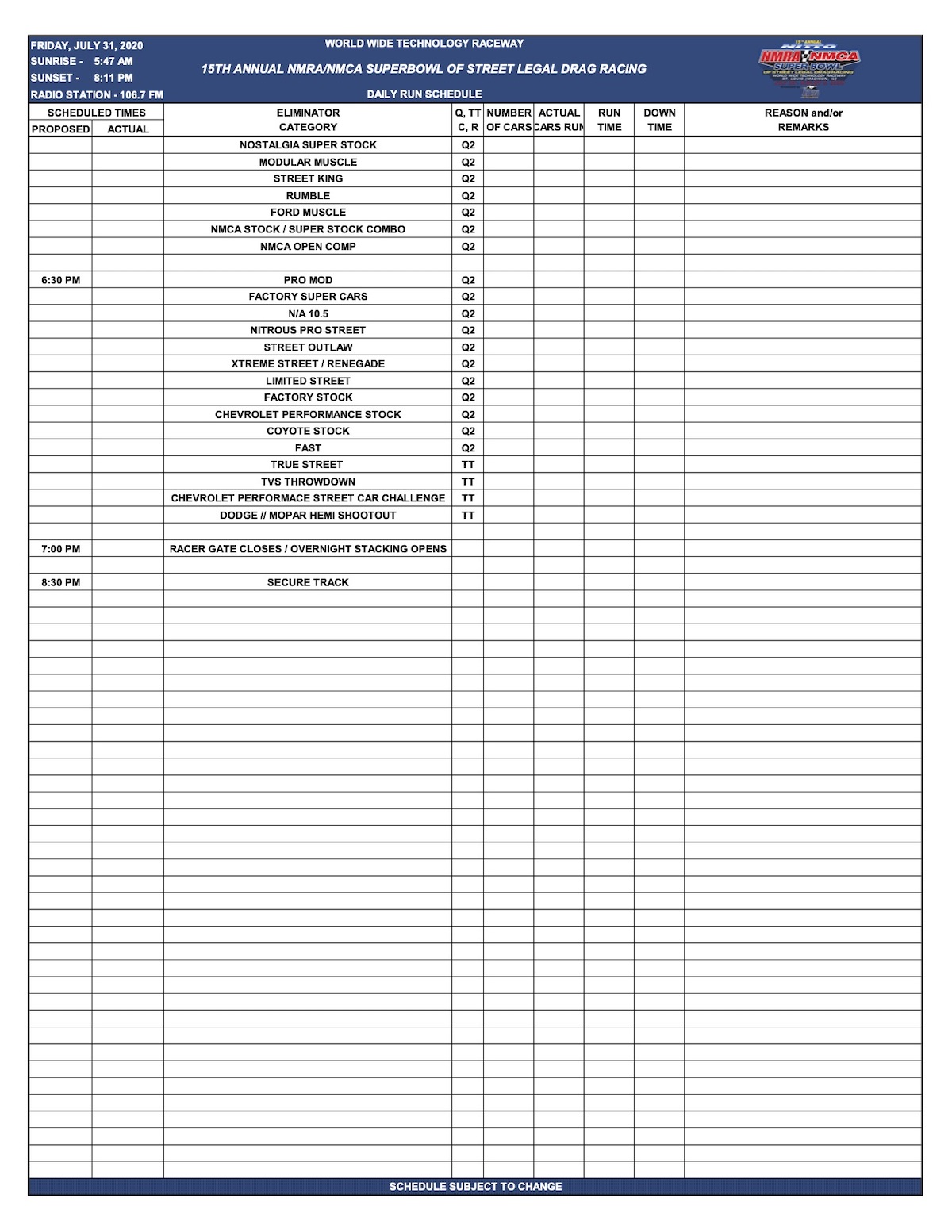