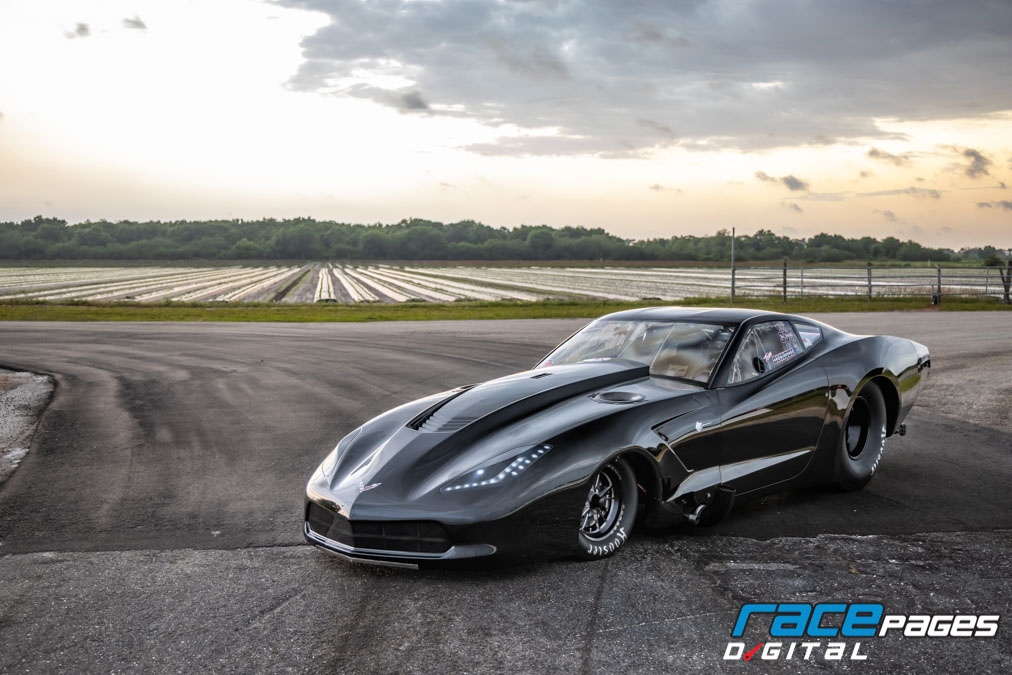 Written by Ainsley Jacobs Photography by Kevin DiOssi It doesn't cost a cent to be kind, is a life philosophy that Tom Blincoe has lived by throughout his entire life. His attitude of gratitude and graciousness has manifested into something beyond belief, and the gentleman from Kentucky made it his mission to share his good fortune with those around himparticularly through drag racing. In 1975, Blincoe joined his father-in-law's company, Buzick Construction, which specialized in building distilleries and barrel warehouses for Kentucky's bourbon industry. Over the years, Blincoe helped the family business grow into a major entity, and as he amassed his success, he decided to have a little fun with it. He had Camaros and ran Super Stock, and then had a Corvette that he raced NHRA Top Sportsman with and that's how I first met Tim , remembered David Monday, owner of David Monday Race Cars (DMRC) since 1987, who met Blincoe in 2010 and built a few cars for the man over the years. Monday himself has a stout racing rÃ©sumÃ©, ranging from local Quick 8 championships to a career in Pro Mod and Pro Boost. 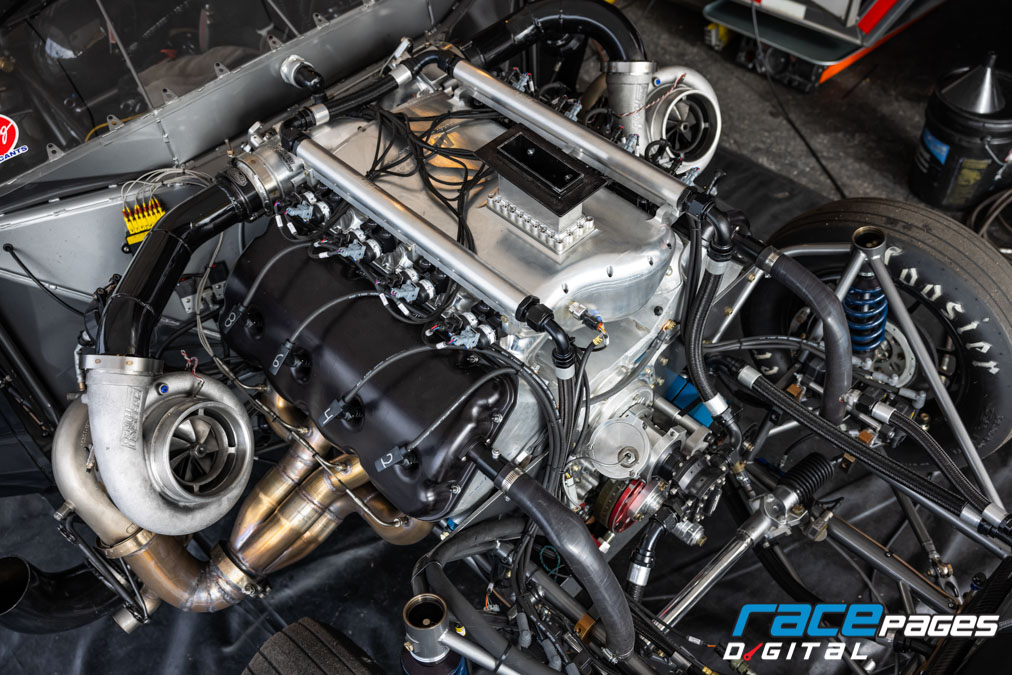 Blincoe picked up his first NHRA Wally in 2013 when he won the Top Sportsman class while racing at the 39th annual NHRA Doorslammer National Open at Ohio Valley Dragway in Kentucky. He's won several other events throughout the year, as well as some NHRA year-end honors for his sportsmanship. When Blincoe decided to go Pro Mod racing, he called Monday. Together, the men produced a ProCharged '63 Chevy Corvette that Blincoe began campaigning in NMCA VP Racing Lubricants Xtreme Pro Mod in 2018, and the driver finished fourteenth in points that season in a large, competitive class. Next, Blincoe kicked off the following year with an event win at the 17th Annual NMCA Muscle Car Mayhem early March at Florida's Bradenton Motorsports Park, as well as other solid finishes and ended his 2019 season with a huge move up to third in championship points. Blincoe, now in his late '60s, had showed his skill as a driver and proved that he had a place in Pro Mod. In late 2019, however, Blincoe asked Monday to start on a new projecta no-expenses-spared, 2021 Corvette-bodied beast. In the interim, Blincoe continued to compete with his '63 model and enjoyed a steady season in 2020. Despite the ups and downs and schedule changes due to the pandemic, Blincoe's consistency put him fifth in points as the year's standings were finalized. We didn't exactly set the woods on fire, but we were decent enough, laughed Monday, who stayed busy trying different transmission and converter combinations for his customer. We didn't get to test a lot because of everything that was going on. 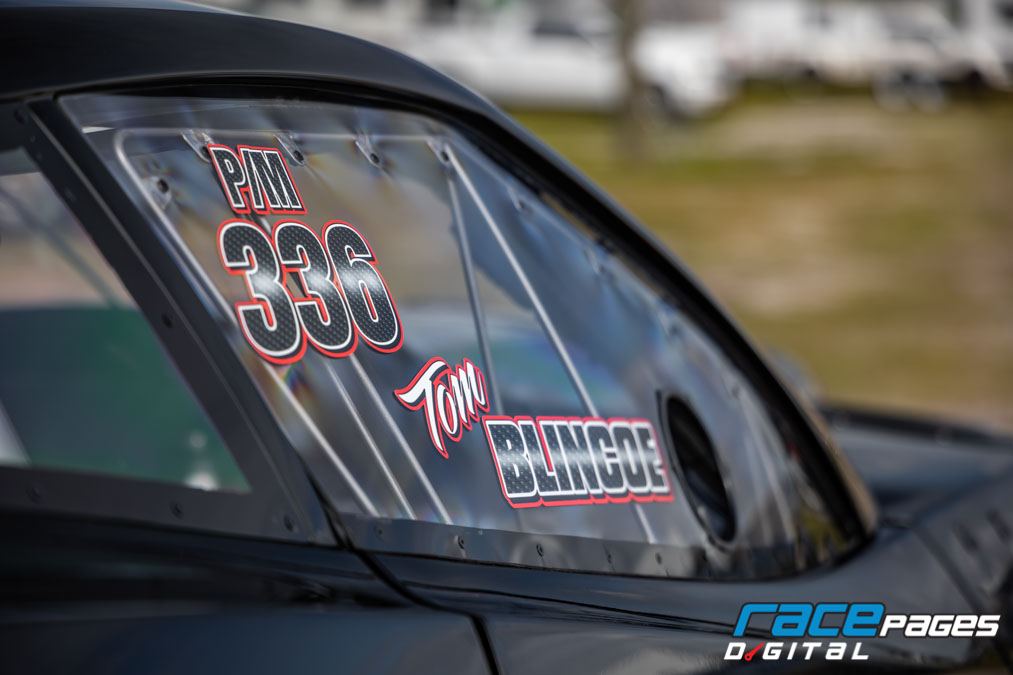 Alongside racing with Blincoe, Monday was busy in the background putting together the puzzle pieces to assemble Blincoe's latest Pro Mod. Except for the Cynergy Composites C7 Corvette body, the entire car was built in-house at David Monday Race Cars as one of their standard Pro Mod products. It's the latest CAD-design that we offer, noted the DMRC owner of the 25.2 SFI-certified chassis, which is comprised of 4130 chrome-moly steel. Lots of carbon fiber parts and panels were added to keep the weight down, and Monday specifically fitted the engine location according to the type of power adder that was to be used. We account for whether it's a turbo, blower, ProCharger, or nitrous car. In Blincoe's case, the decision was made to move from his former supercharger power adder to twin turbochargers instead. Wanting to minimize the potential for parts failures from other forced induction options and simplify engine maintenance, Blincoe chose to utilize the snails on the 598ci Chevy-based big-block enginealso designed and manufactured in-house at David Monday Race Cars. We don't turn a lot of rpm like a Chrysler-based Hemi, so we felt the turbos were the better way to go. These engines are very reliable, and you don't have to service them as muchalthough we do take them apart and inspect everything after every roundbut they're easier on parts than a standard Hemi, clarified the mastermind. Everything from the bottom end to the heads, manifolds, and more, is machined by Monday's crew on their state-of-the-art CNC equipment. It's a cross-bolted main, like a Hemi, with a symmetrical Hemi-type head for Chevrolet that we redesigned from another manufacturer to our own specs, he continued. 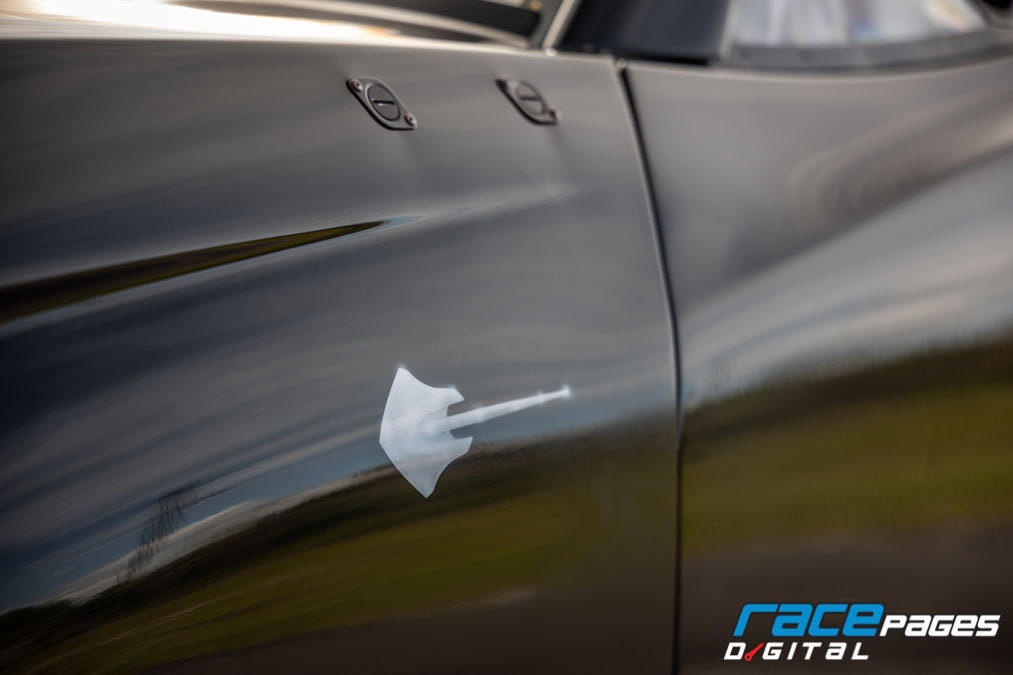 Blincoe's engine features a 5-inch-bore-space block that's been beefed up with a Bryant Racing crankshaft, GRP connecting rods, custom-designed pistons from Gibtec, and more. Victory valves, Bullet camshafts, and Jesel lifters and rockers were also installed, along with a Wilson Manifolds throttle body and Jesel belt-drive. At first, a five-speed Liberty transmission with a Quick Drive converter drive was on the spec sheet for the C7, but the men have since switched to a Rossler three-speed Turbo 400 automatic and Neal Chance torque converter instead. To control the powertrain, the DMRC team wired in a Haltech Nexus R5 EFI system and Davis Technologies vehicle-position sensor kit. We work with PTP Racing's Patrick Barnhill for the configuration and tune-up, as well as the engine design, and he's been an integral part of what we do, added Monday. On the hub dyno at DMRC, the boosted engine combination produced a whopping 4,926-horsepower at the rear hub and eclipsed their previous combinations by a 1,000. Handling nearly 5,000-horsepower is certainly not an easy task, but Monday has equipped Blincoe's C7 with the right parts to handle the job. We manufactured a rearend housing, but have since gone to a Strange modular housing with 10-inch ring gears, he detailed of the components incorporated into the custom four-link setup. A multitude of rear shocksincluding four-way adjustables from Kinetic Engineering and two-ways from Penske Racingalong with several other options, are swapped in and out according to different conditions at different tracks and are re-valved in house as needed as well. 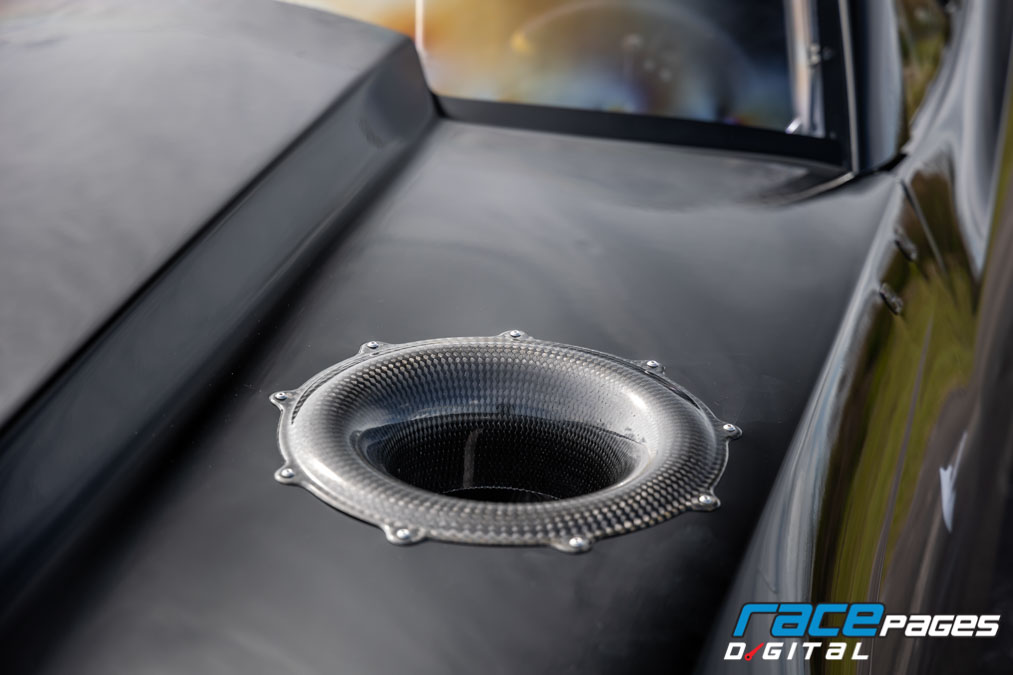 Carbon MVM wheelie bars help keep the C7 planted and on the straight and narrow so that its Hoosier tire-wrapped Weld wheels can propel Blincoe as best as possible. Although Monday and his team have finished start-to-finish Pro Mod builds in as little as six and a half weeks in the past, a more standard timeline is around the six-month mark. Unfortunately, the pandemic and associated parts shortages pushed the schedule back significantly this time around, and Blincoe's C7 wasn't ready to make its debut until the start of the 2021 season. During the downtime, though, Blincoe was able to take advantage of the situation and turn it into a positive by moving his shop into a new, larger 17,000-square foot facility. We have a great staff here who excel at what they do, including William Smith, Paul Carroll, Tony Hurst, and Howard Moon who builds the engines, said Monday of the crew he trusts to produce outstanding results. We've got horizonal and vertical CNC mills, Bridgeports and lathes, and all the engine-building equipment we need to be a full-scale race car manufacturer. However, neither the move nor the growth that necessitated it would have been possible without Blincoe's extreme generosity. I work seven days a week, twelve hours a day, and Tom is just like that, too. He's a self-made man and when he decided to race at this level, he also decided to help me and my business, shared Monday, who is incredibly grateful for the support he's received over the years from his customer-turned friend. Tom is the main reason for my company, and my business. You won't ever meet someone like him, he's an absolute blessing. 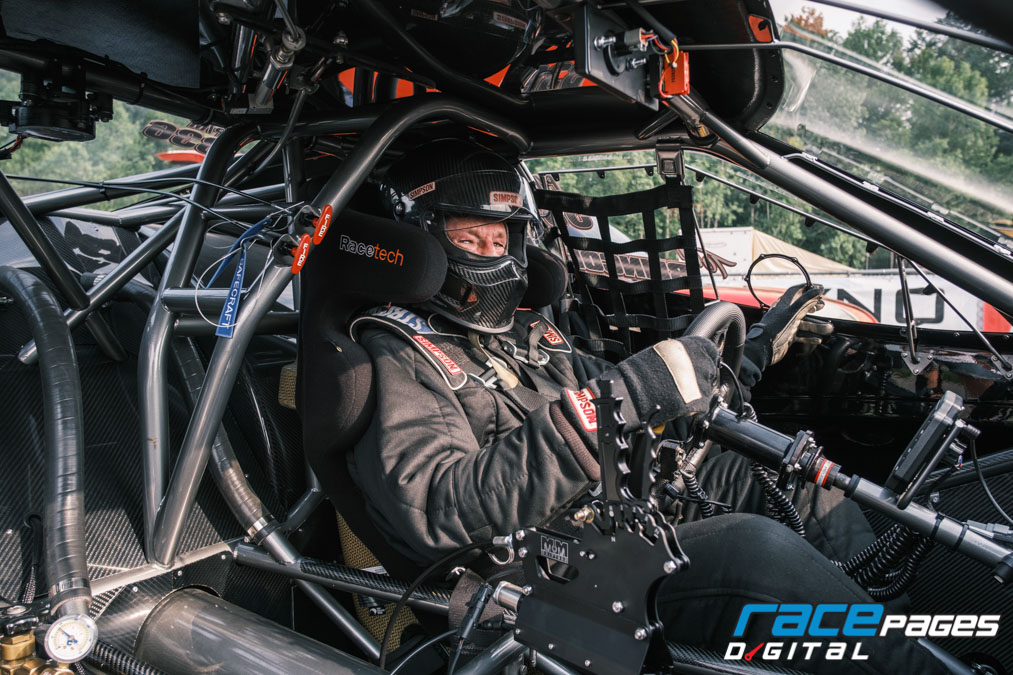 As much as he loves racing, Blincoe loves seeing those around him succeed. He shows up at the track, gets in, drives, has fun, lets Monday and Barnhill handle everything, and then flies back to his home in Kentucky. It's a win-win; we all get to do what we're good at and trust each other completely, noted Monday. Tom has taught me a lot of lessons in life and in business. Barnhill, too, has been blessed to have met Blincoe. You can't find a nicer guy, or a guy more committed to his team. He's great to work with, confirmed the tuner who has been working with Blincoe since his Top Sportsman days. He's modest and humble. He's simply the most genuinely kind and giving person I've ever met. In 2021, the three men set out with the new C7 Corvette and were ready to get back to normalcy after a tumultuous 2020. Kicking things off once again with the traditional season opener in Florida for the 19th Annual Whipple Superchargers NMCA Muscle Car Mayhem, the teams' rigs rolled on to the property at Bradenton Motorsports Park eager to get going. We put the first lap on the car the Wednesday before the race, stated Monday, who allowed for a few test hits to get Blincoe comfortable in his new twin-turbo C7 office. In NMCA VP Racing Lubricants Xtreme Pro Mod, Blincoe ran a best of 3.745 at 215.00 mph to settle into eleventh in the eighteen-car field on only its third full pass ever. 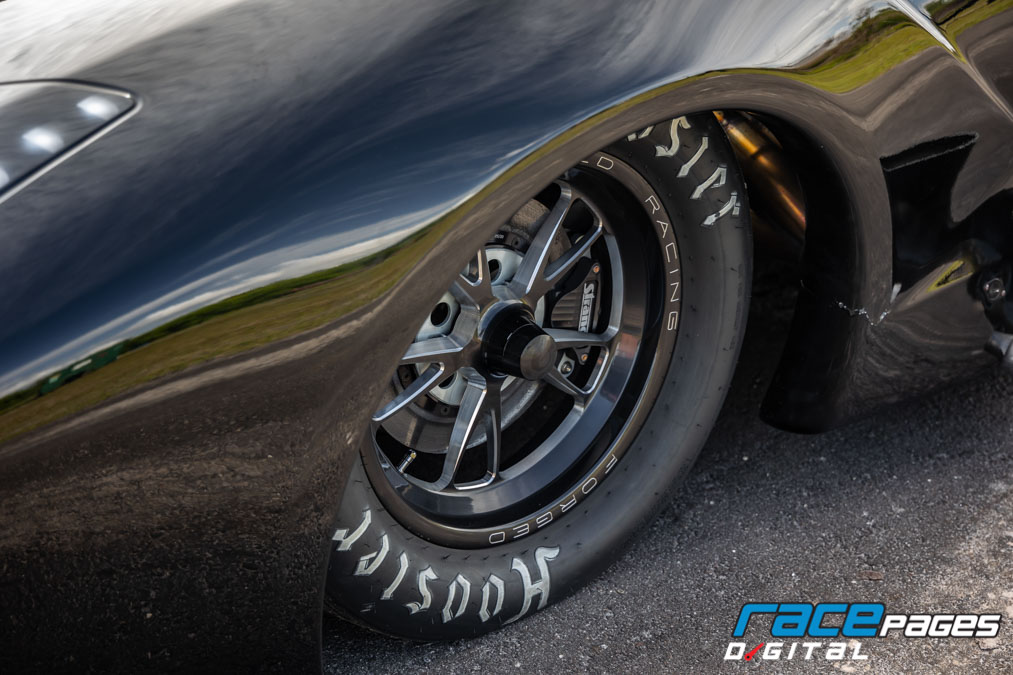 Meanwhile, Monday himself had been driving Blincoe's old '63 Corvettewhich had also been converted to a twin-turbocharged combination the December priorand ran 3.760 at 212.49 mph to finish 12th, just a hair behind his customer. Ultimately, both men went out during round one of eliminations, but neither were upset as Blincoe's prevailing positivity kept spirits high. Despite his unyielding optimism, the following race at Georgia's Atlanta Dragway was tough on Blincoe. We had a few issues that we didn't get worked out until the end on Sunday, explained Monday of why Blincoe was only able to manage a 6.508 at 67.03mph hit in qualifying and a 5.314 at 93.99mph effort in eliminations that didn't enable him to advance at the Scoggin Dickey Parts Center NMRA/NMCA All-Star Nationals presented by MAHLE Motorsport. After that race is when we moved to the Turbo 400 and it's helped a bunch with trying to stage the car. The new transmission wasn't ready in time for the NMRA/NMCA Super Bowl of Street-Legal Drag Racing presented by HPJ Performance, so both Blincoe and Monday sat that race out. We went and tested not long after, and have been changing transmission combinations and gear ratios a lot, asserted Monday, who is doing everything in his power to ensure Blincoe is back out in front. The turbos are good, full of promise and potential. 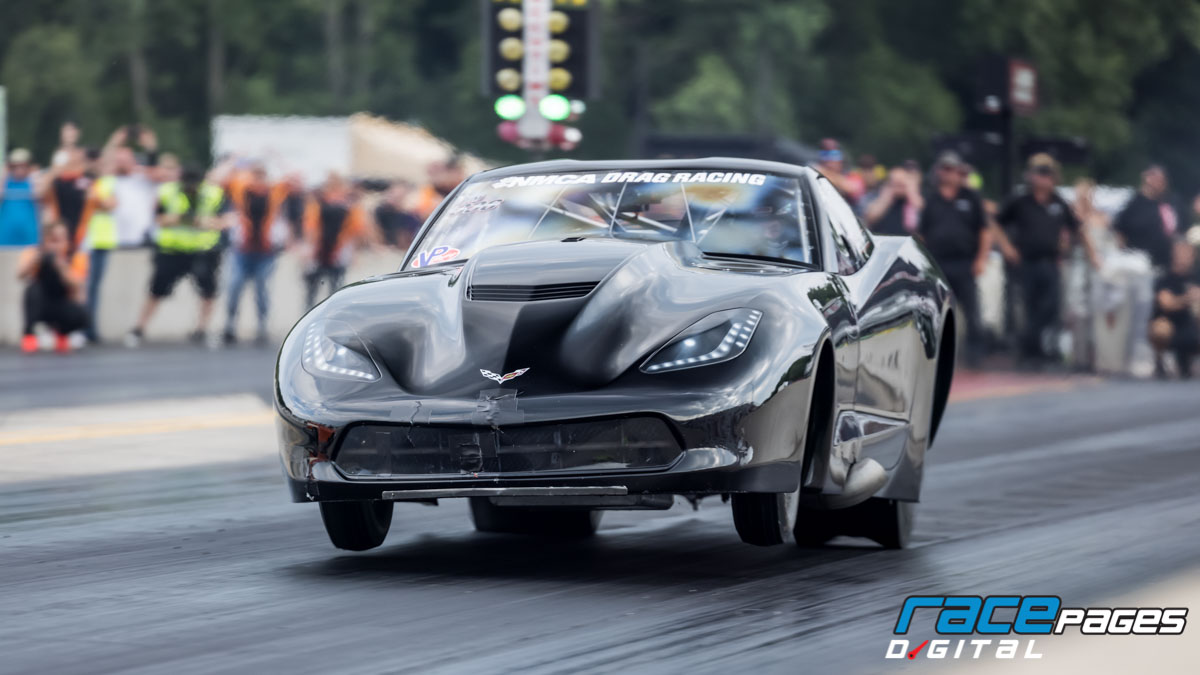 In Michigan, while racing at the Inaugural Arrington Performance NMRA/NMCA Power Festival presented by Force Engineering at US 131 Motorsports Park in late July, Blincoe blasted to a best qualifying run of 3.861 at 204.82 mph and wound up eleventh in the tough VP Racing Lubricants Pro Mod field. In eliminations, though, Blincoe slowed in round one and wasn't able to illuminate the win light in his lane. As the 2021 NMCA season begins to wind down, Blincoe's enthusiasm is bigger than ever. He and Monday are planning to finish out the year with as many events as they can manageincluding the remainder of the NMCA calendaralong with various PDRA and MWDRS events and Monday is also building a clone of Blincoe's C7 for himself. To stack the deck in their favor, Monday has amassed a massive collection of spare engines, a whopping nine in total. We've got more cars to build for ourselves and for customers, Monday laughed of the daunting task list still ahead of him, but we're just trying to get better and improve like everyone else. With so many opportunities ahead and a competitive nature, Blincoe is committed to driving for as long as he's physically able to. Having his wife, Donna The Queen, and the rest of his family along at events is a huge bonus for the busy man as he loves his three children, Donald, Laura, and Karl. For Blincoe, there's always something to do and he works hard to make the most of every moment available to him, especially when it comes to racing. 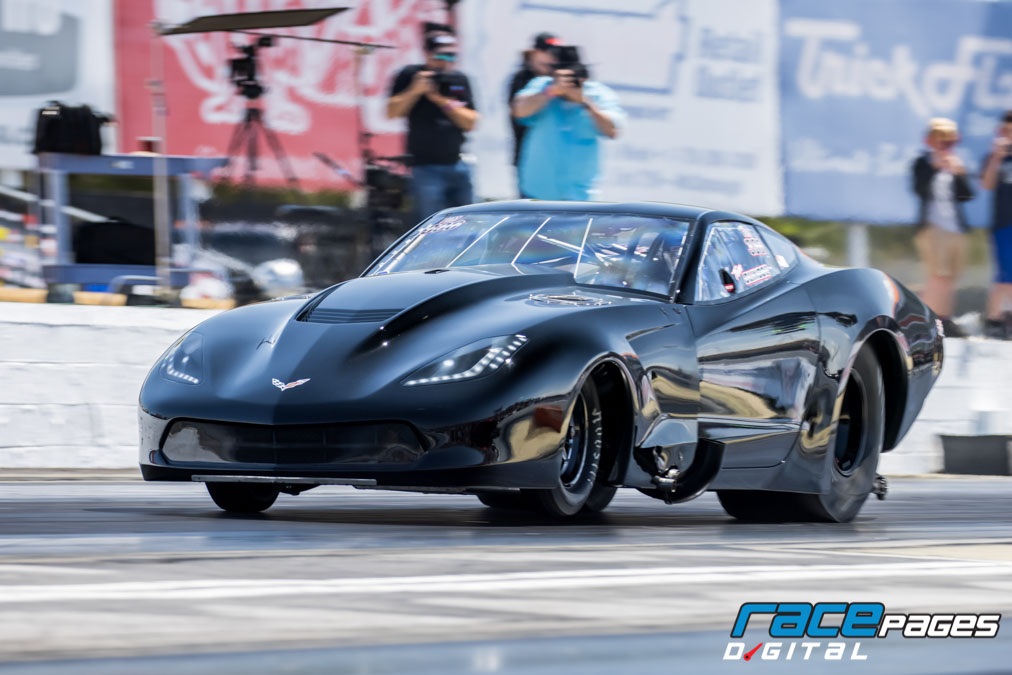