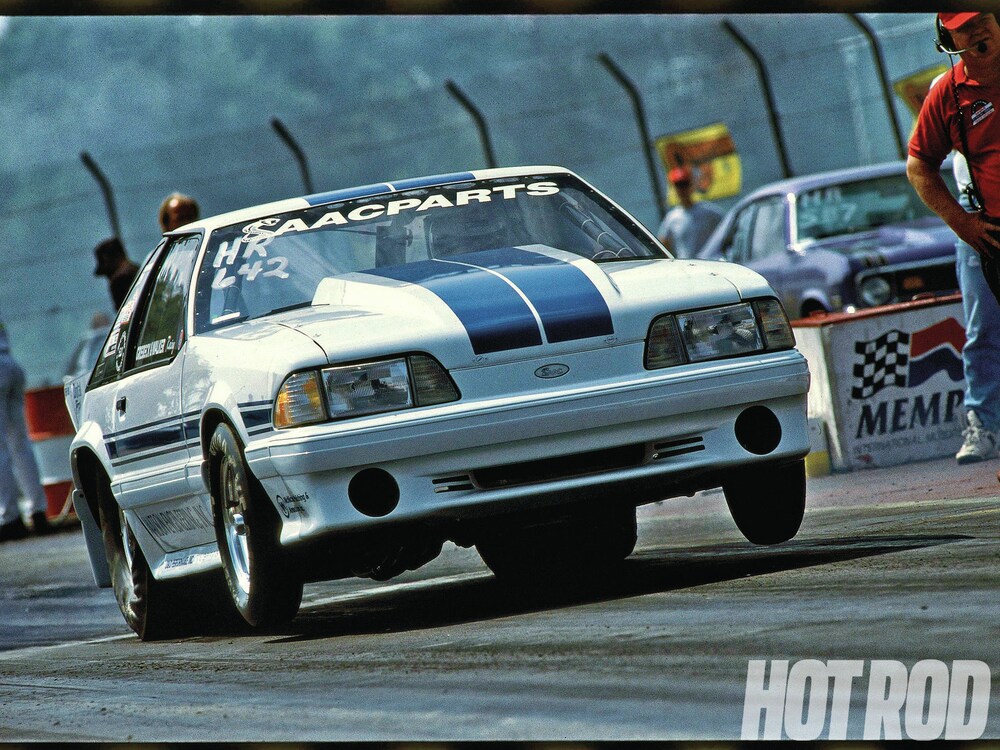 Steve Grebeck getting busy at the 1992 running of Hot Rod Magazine's Fastest Street Car Shootout. The legendary racer and fabricator worked at Watson Engineering at the time and they used the Pro 5.0 car to promote a special-edition Fox-body Mustang created by the Shelby American Auto Club.The Burnt Piston Will The Fox Mustang Conquer Pro Modified By Michael Galimi Photo Courtesy of Hot Rod Magazine The Fox-body Mustang craze is still stirring as we celebrate 35 years of the EFI version of the venerable 5.0 High Output engine in 2021. The latest box to check off in the Fox Mustang history book is a dedicated Pro Modified-style body. You've most likely already seen the collaboration between Schoneck Composites and Cynergy Composites, as they designed an aerodynamic, stretched version of a Fox Mustang for drag racing's top door-slammer category. You can check it out here. For longtime Mustang enthusiasts, it conjures up nostalgic thoughts of Pro 5.0, the once-burgeoning category that helped push grassroots motorsport technology in the EFI, turbocharging, and centrifugal supercharging niches. I've never seen a Pro Mod version of the Fox Mustang body; sure, I've come across lightweight replicas and other custom efforts in my travels. One that comes to mind is my buddy Dal Sangha from western Canada and his old notchback that ran bottom sixes. But this is a first production-based effort and our buddy Dan Schoneck knows how to party when it comes to announcing new products. He released the yellow version on Facebook to much fanfare and I sent a text message to find out of if he had more renderings. He revealed seven different color patterns and two of them caught my attention¦ The first was the white Mustang and I quickly began thinking about the SAAC Mustang Pro 5.0 ride that Steve Grebeck raced in 1992 and 1993. The racecar was meant to promote a then-new special edition Mustang. In typical Grebeck fashion, he went way overboard in its design and execution. The small-block Ford featured Trick Flow heads and a unique sheetmetal intake with a BDS blower hat acting as a throttle body. He slammed the gears in a Jerico four-speed and dropped the Mustang into the eights rather easily. In fact, Grebeck even entered Hot Rod Magazine's 1992 Fastest Street Car Shootout in Memphis and just missed getting a Top 10 jacket during the inaugural running of that event. Second on my list for tribute cars would be Big Red I, the first of the Jim Summers-series of fast cars that he built through ASSC Racing. It was also his only Fox Mustang racecar. Big Red 2 featured an SN-95 body, while the slickest ride of all, Big Red 3, was a New-Edge Mustang. Summers drove Big Red 1 to the first 8-second run in Fun Ford Weekend Street Outlaw. A few years later, he stepped up to Pro 5.0 with a back-half chassis construction andat the timethe sickest ProCharger-blown 347. He went on to set records and win the biggest events while continually demanding more power from ProCharger, one of his biggest sponsors. Summers went on to build two more Big Red Mustangs, each one rowdier than the previous version as he kept up with the quickly changing Pro 5.0 category. The Big Red Pro Mod would be a fitting tribute to one of the biggest personalities in the sport. He left his mark on the centrifugal supercharger world as a racer and as ProCharger's Motorsport Manager, helping to continue technological advancements before he passed away. In recent years, his power adder of choice climbed to the top of the door-slammer world across nearly every major sanctioning body, including NMCA and NHRA. What would your Pro 5.0 tribute car be if you got your hands on one of the Schoneck/Cynergy bodies Drop us a line and let us know.