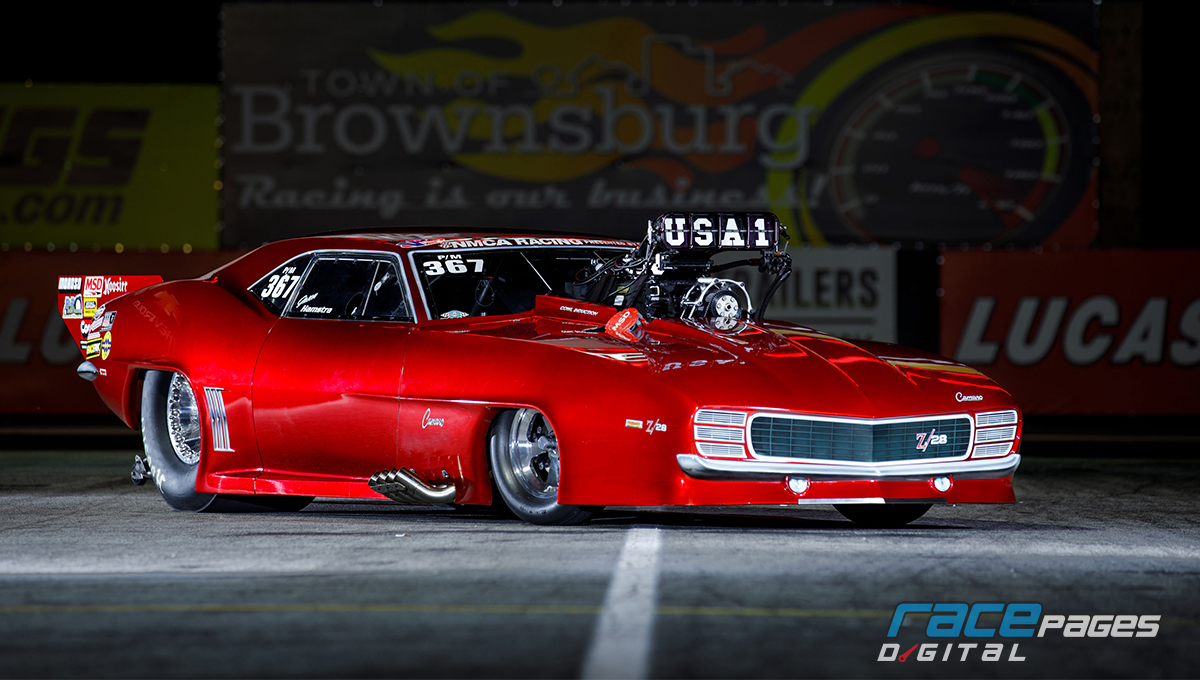 While Jason Hamstra was going rounds and recruiting rivals in his 2012 Mustang in NMCA VP Racing Fuels Xtreme Pro Mod, he was ready to re-route at the end of 2016. Thats when he purchased a 1969 Camaro, which was built and driven by Alan Pittman in PDRA Pro Boost.

There was nothing wrong with the Mustang, which we ended up selling to Adam Flamholc, Hamstra, who also competes in PDRA and NHRA, said. We had just always liked the 1969 model Camaro, and we had seen this one in competition and thought it was really nice, so when we learned that it was for sale, we knew right away that we wanted to buy it. We made the trip from our homes in Indiana to South Carolina to pick it up.

Upon returning home with the car, which wears Candy Apple red-over-gold paint, Hamstra, whose crew consists of his wife, Patsy Hamstra, and parents, Karen and Kevin Hamstra, restructured the four-link setup under the car so that it was similar to the four-link setup that he had successfully campaigned under his Mustang.

They replaced the engine that was in the car with the engine from the Mustang a 521 cubic-inch bullet based on a Chuck Nuytten billet aluminum block and topped with billet Noonan heads and a Hogans sheetmetal intake. Added adrenaline came from a Mike Janis-massaged roots-style supercharger, and Hamsta backed the mechanically fuel injected combination with a Coan Turbo 400 transmission and a Coan billet aluminum bolt-together converter.

When everything was in place, they headed to Bradenton Motorsports Park in Florida to test in March of 2017.

We felt good about what we had going into testing, but we also knew that there would be some things that we had to work out with the car that was new to us, said Hamstra. Fortunately, we were able to get some good laps under our belts.

A few days later, Hamstra debuted the car in VP Racing Fuels Xtreme Pro Mod at the NMCA season-opener, also at Bradenton Motorsports Park in Florida. He proved that his new car and its driver were a potent combo by pushing to a 3.77 to lead qualifying. He went on to win the race in the Camaro.

In addition to leading qualifying and winning the race, we went the fastest we had ever gone that weekend with the 3.77, and we thought that was a pretty good start with a car that was new to us and felt different to us than our other cars, said Hamstra, who was using a footbrake rather than a handbrake for the first time in his Pro Mod career. We were happy.

He went on to win the NMCA event at Summit Motorsports Park in Ohio, and to runner-up at the NMCA event at Route 66 Raceway in Illinois, and without resting between races, he won a Midwest Pro Mod Series event. By the end of 2017, he was in contention for the NMCA VP Racing Fuels Xtreme Pro Mod championship, despite having missed a race because he was tuning for Pro Mod driver Chip King at an NHRA event. Going into the final race of the season at Lucas Oil Raceway in Indiana, Hamstra would have to outrun Adam Flamholc, Steve Summers, and Billy Banaka to earn the championship, but his chance was chucked when his car made a mad move and he almost collected a cone. Steve Summers was later crowned the 2017 VP Racing Fuels Xtreme Pro Mod champion.

We knew that we would have a lot of catching up to do after missing just one race and that it would be even tougher to be able to pull off the championship, Hamstra, who finished second place in points, confessed. We were still pleased that we had done enough to be in contention for the championship.

Over winter, Hamstra began charting a course that he hoped would lead to a championship in 2018.

At the same time, Hamstra also freshened his engine and made some changes to it to ensure that it would be compatible with the twin-screw boost.

We changed rod length and head gaskets to take a little compression out of it and we changed the cam timing, Hamstra elaborated. We also replaced our Hogans sheetmetal intake with a Brad Anderson aluminum intake. We had to do that because a different intake was required for the screw blower.

When the work was wrapped up, Hamstra headed to the U.S. Street Nationals in January of 2018 at Bradenton Motorsports Park in Bradenton, Florida, where he ran as quick as 3.75 on his way to a runner-up finish in Pro Mod Boost against Tommy DAprile, for whom Hamstra had recently massaged a new Coan transmission and converter.

With that, he was ready to begin his quest for an NMCA VP Racing Fuels Xtreme Pro Mod championship with the series 2018 season opener, the 16th Annual NMCA Muscle Car Mayhem in March at Bradenton Motorsports Park in Bradenton, Florida, where he rocketed to a 3.75 to qualify in the second spot and ran to a runner-up finish.

He followed that with a 3.67 to set the pace in qualifying at the 10th Annual NMCA/NMRA All-Star Nationals in April at Atlanta Dragway, where there was an all-3-second field in VP Racing Fuels Xtreme Pro Mod for the first time in history, and won with a 3.69 at the 13th Annual Nitto NMRA/NMCA Super Bowl of Street Legal Drag Racing in July at Route 66 Raceway in Illinois. On a roll, he set the pace in qualifying again, this time with a 3.72, at the 17th Annual Honeywell Garrett NMCA All-American Nationals in August at Summit Motorsports Park in Ohio, and pulled off the win.

A fine feat considering it was only his second season in the car, Hamsta had the lead in points going into the final event of the year, the NMCA World Street Finals in September at Lucas Oil Raceway in Indiana, and he and Don Walsh Jr. were separated by a mere 230 points for the championship. Hamstra was going to have his work cut out for him considering the level of competition in the category, but was as steady as he always seems to be.

We wanted to win it very badly, but all you can do is go out there and do your best, said Hamstra, who added that he and his family are farmers who should have been harvesting their corn and soybean crops at the time of the event.

Using his cool, calm and collected approach, he led qualifying with a 3.71 in the categorys fifth all-3-second field of the season, and he drove his consistent car to a 3.70 to win and to claim the 2018 NMCA VP Racing Fuels Xtreme Pro Mod championship.

We kept working with the new car to make it even better and even faster, said Hamstra. We made changes to the converter, timing curve, fuel system and things like that as we went along, and it worked. There were more than 30 drivers in qualifying in the category at a lot of the races, so to be able to have earned the championship meant an awful lot to us.

Crank: We use a couple different cranks

Rods: Well pass on sharing that.

Pistons: Well pass on sharing that.

Valvetrain: Well pass on sharing that.

Camshaft: Well pass on sharing that.

Headers and Exhaust: Fabricated steel headers that we had on the Mustang before we sold it.

Wheels: We have a set of Sanders wheels and a set of Weld wheels

Tires: Hoosier slicks on back and Hoosiers on front